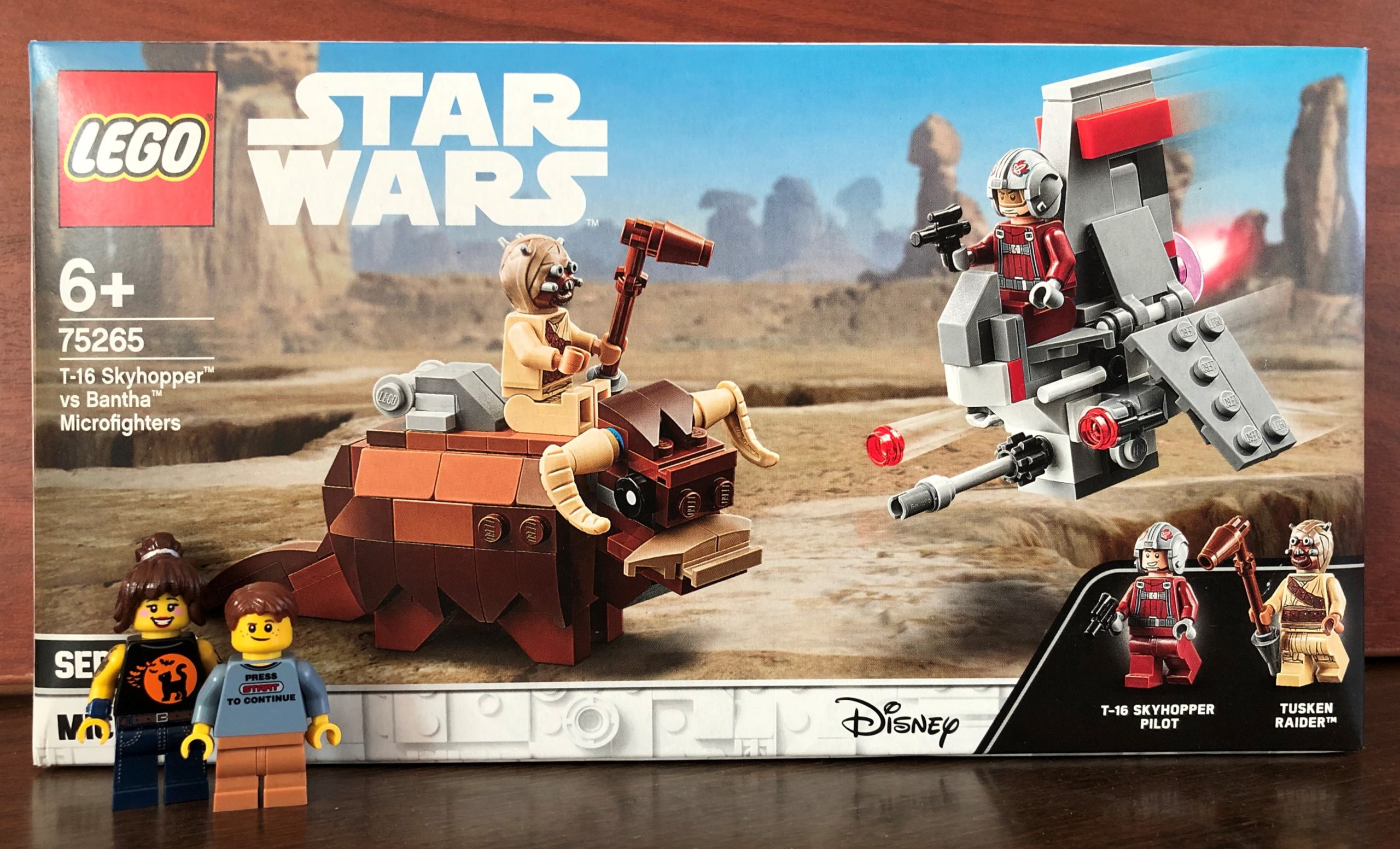 Looking at some of the recent articles, and the ones that are yet to come, I see that Star Wars, once again, takes the majority of the blog. So, I decided to join the trend and write my first-ever article solely based on a Star Wars set. Not just any set, mind you, the only set (so far) to feature a Bantha, even though it’s a brick-built one. Ladies and gentlemen, here’s my review of the set 75265, T-16 Skyhopper vs Bantha Microfighters!

I heard Banthas are very complicated creatures, and that the set is a pretty hard build. Therefore, I employed some help before starting to build. My son, who was on his semester break at the time, was more than happy to help me build this extremely difficult set. So we began our adventure.

While I’m not a HUGE fan of Star Wars, the minifigures still manage to cover one baseplate of my collection. I’ve been seeing the Star Wars Microfighters sets since they have been first released in 2014, and while I wasn’t very interested in the spaceships, it was a great opportunity for me to get some of my missing minifigures without having to buy big sets. Still, they always seemed to be pushed downwards on my buy list. Other sets (or figures) just seemed more… relevant.

Still, three of them somehow sneaked in. I absolutely loved the AT-AT from Series 2, and had fun photographing it. It may be a big baddie in the movies, but the caricaturized version of it looked like a fun robot “pet” to have around.

A few years later, I stumbled across the animated series, Star Wars Rebels. I really liked the first season, so I decided to get the minifigures for my collection. Hera, of course, was a must, and having a tiny Ghost was a plus. 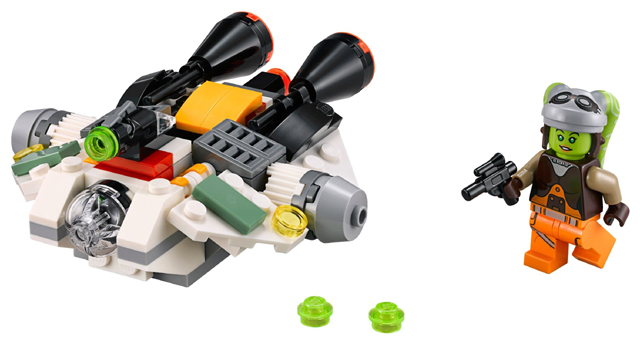 The Millennium Falcon Microfighter set was released several years later. I figured it was high time I added Chewbacca to my collection, and having Millennium Falcon, even a small one, wouldn’t hurt. So they, too, joined. 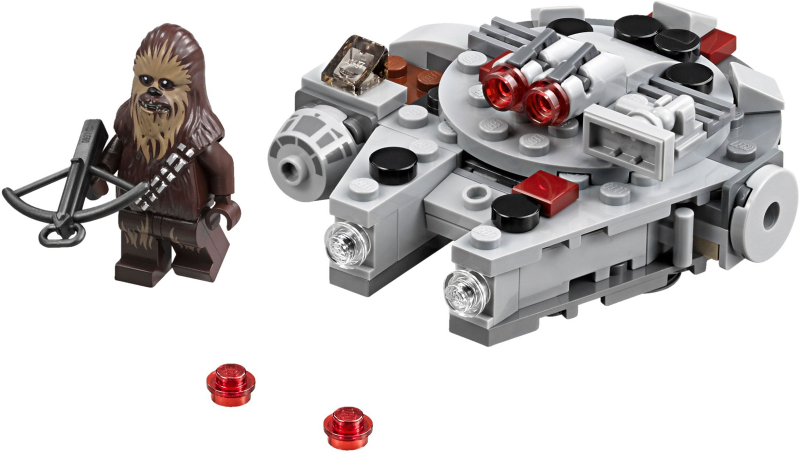 I also had my eyes on the Dewback Microfighter set, released in 2019, but I just didn’t want duplicates of R2-D2 and C-3PO. While the Dewback was really cute, it wasn’t enough for me to get the set. Instead, I went with the Disney CMFs. You gotta make a choice sometimes, right?

The Box and Its Contents

What was I saying? Right, the adventure. Let’s get back to that.

The box contained of two bags and two instruction booklets. I thought that was neat, since it makes it possible for two people to build together. Unfortunately, that wasn’t the case with us. You see, I’m not very good at connecting the small bricks, and because of my age, can’t see very well. Thankfully, my son was there to aid me. His hands are much more fit for this job than mine! 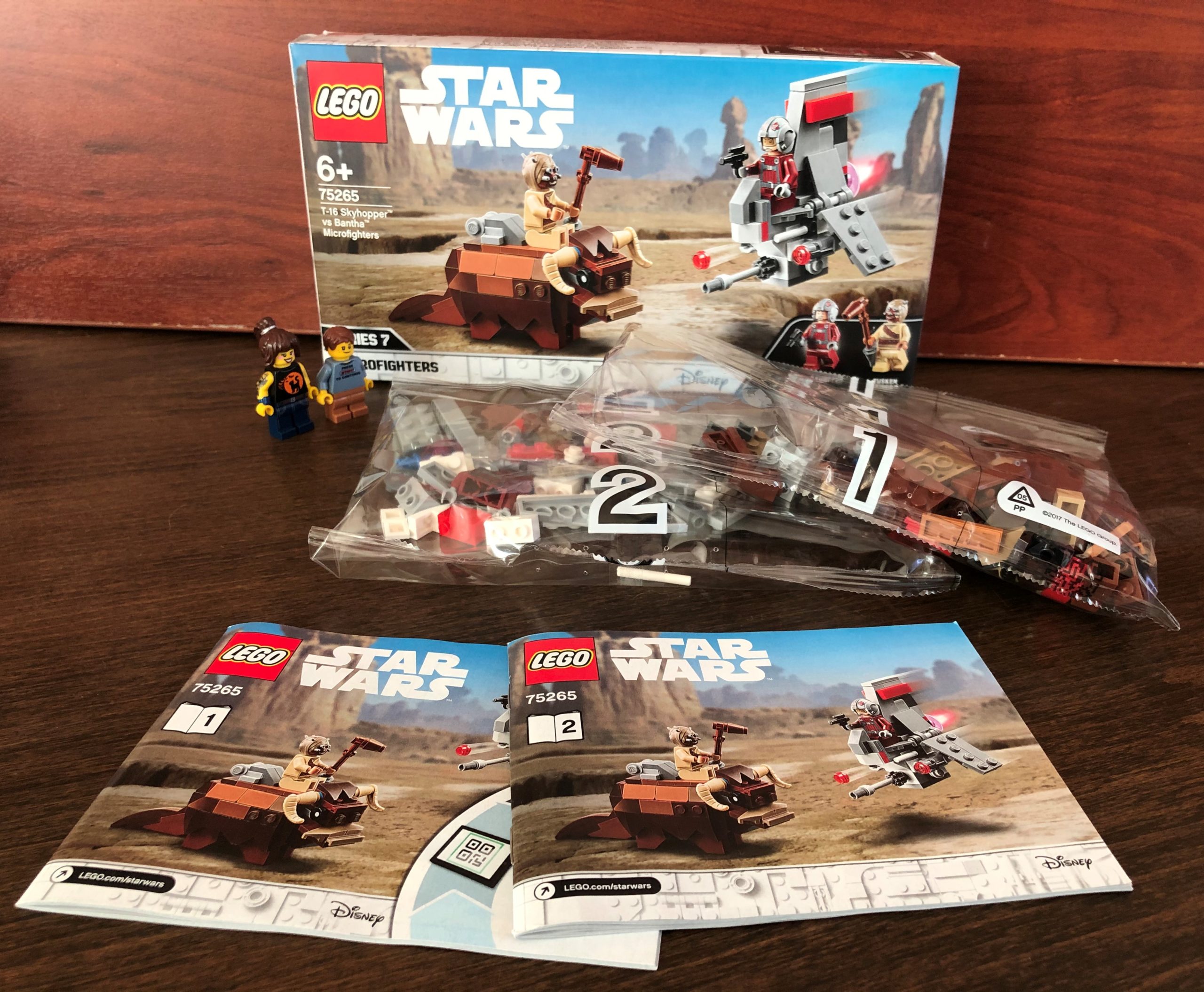 The Bantha and the Tusken Raider

We started with the first bag, and the first minifigure, which happened to be the Tusken Raider. This, it seems, wasn’t a good idea. As soon as he was assembled, he attacked us! Wow, talk about disappointment! We rescue him from the plastic bag he’s stuck in, and he thanks us by attacking. We did manage to neutralize him by offering some cookies, though, so we could go back to our build. 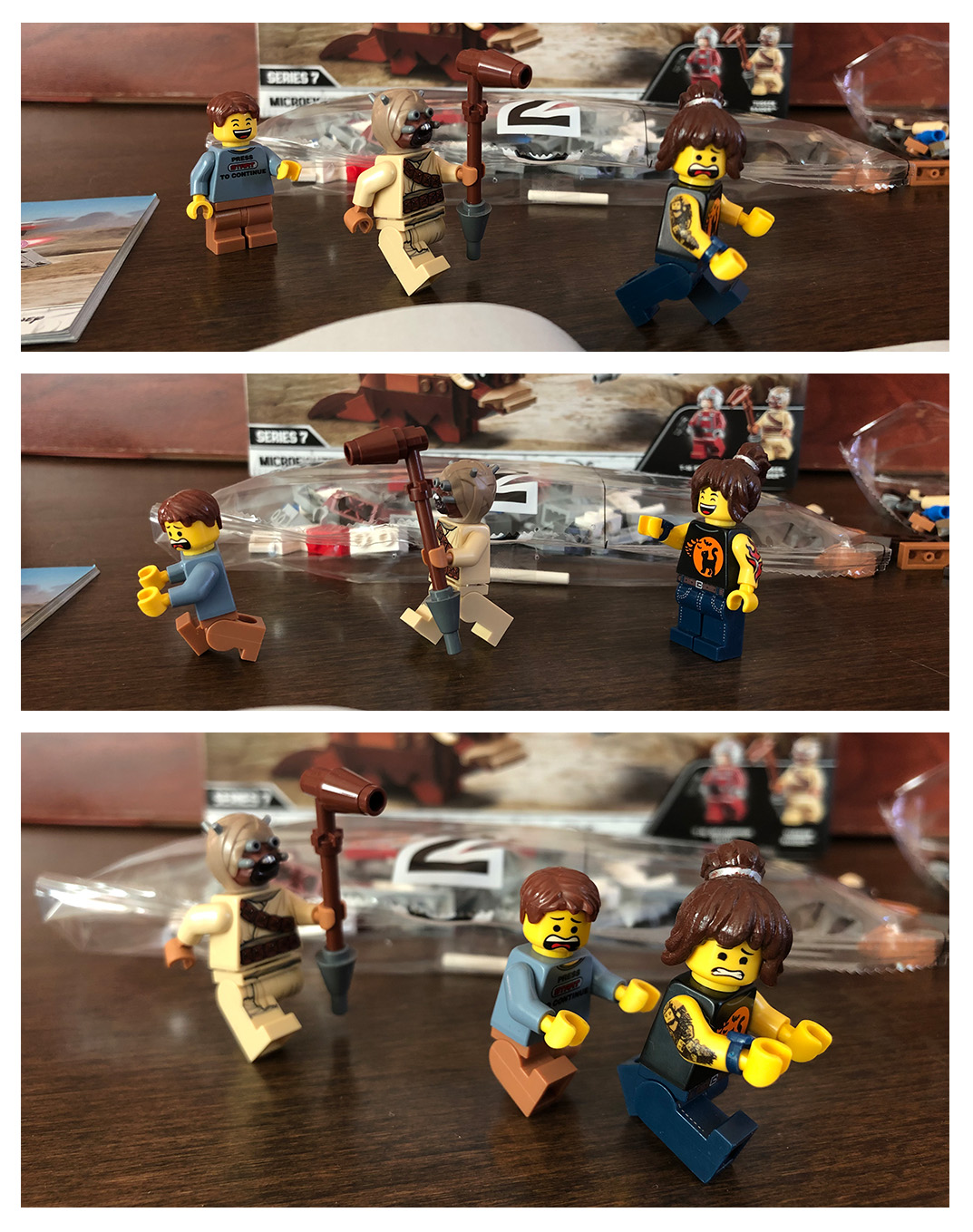 The first bag gave us the Bantha itself. Despite my jokes above, the build is a pretty simple one, but still has some cool features like tail and head movement. It’s very much like the minifigures, consisting of three separate parts: The head, the body, and the tail. You build the body first, then the tail, and finally, the head. The ball joint allows the head to move up and down as well as left and right, which creates opportunities for fun pictures.

Of course, after finishing the build, we took it for a ride. While it was a short one (the Tusken Raider wanted his Bantha), it was still great.

T-16 Skyhopper and Its Pilot

After petting and riding the Bantha, we moved to the second back, which had the T-16 Skyhopper. Again, we started by assembling the minifigure first. It must be our luck with this set, because he, too, didn’t like us very much. Apparently, he thought we were with the Empire. After explaining we only go to the Dark Side for the cookies, he lowered his blaster so we could build his ship in peace. 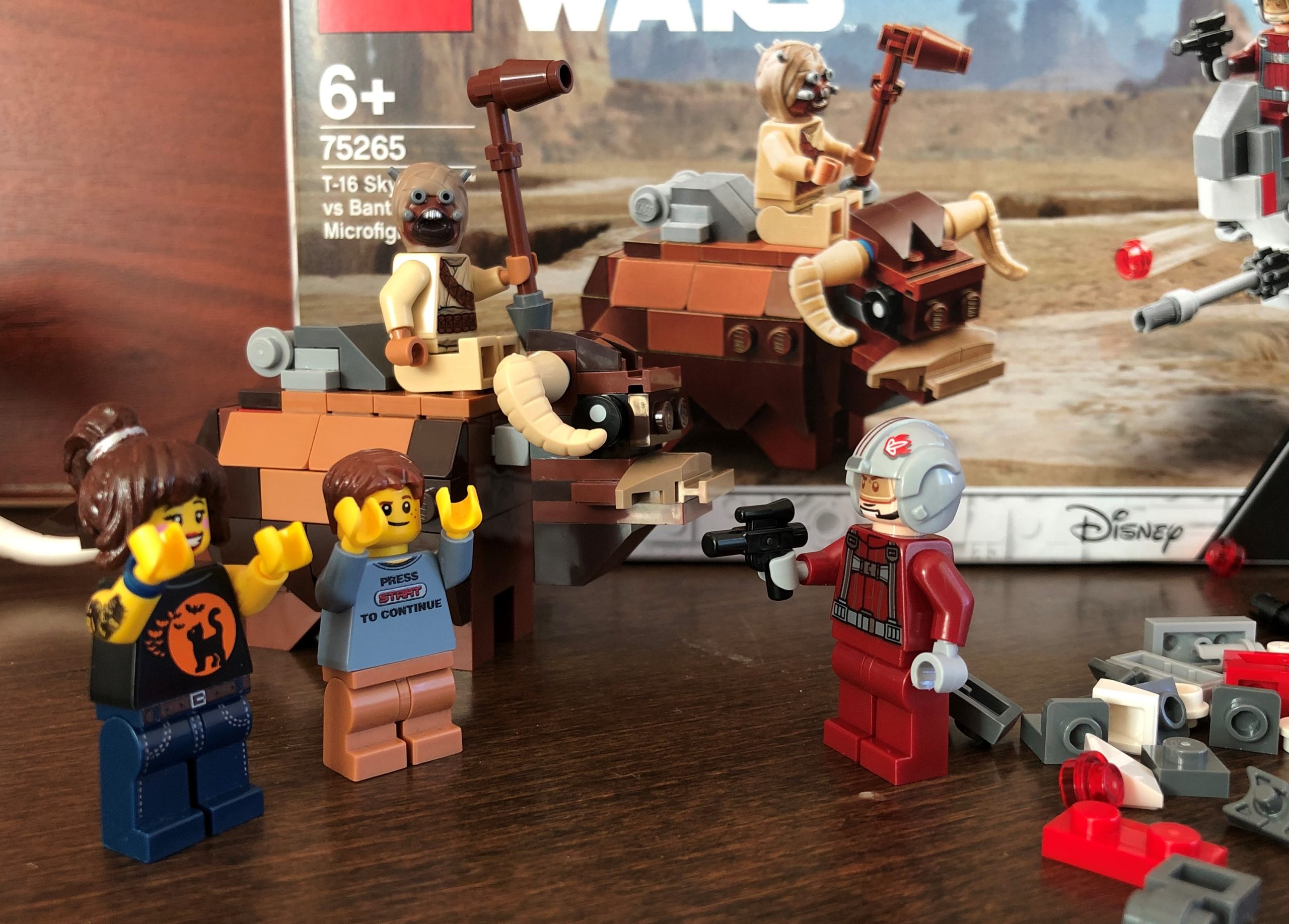 While it consisted of many tiny parts, the ship, too, was a pretty simple build. Before I could say “I need to take pictures!”, it was finished. Oh well, you can’t control the help you get, right? 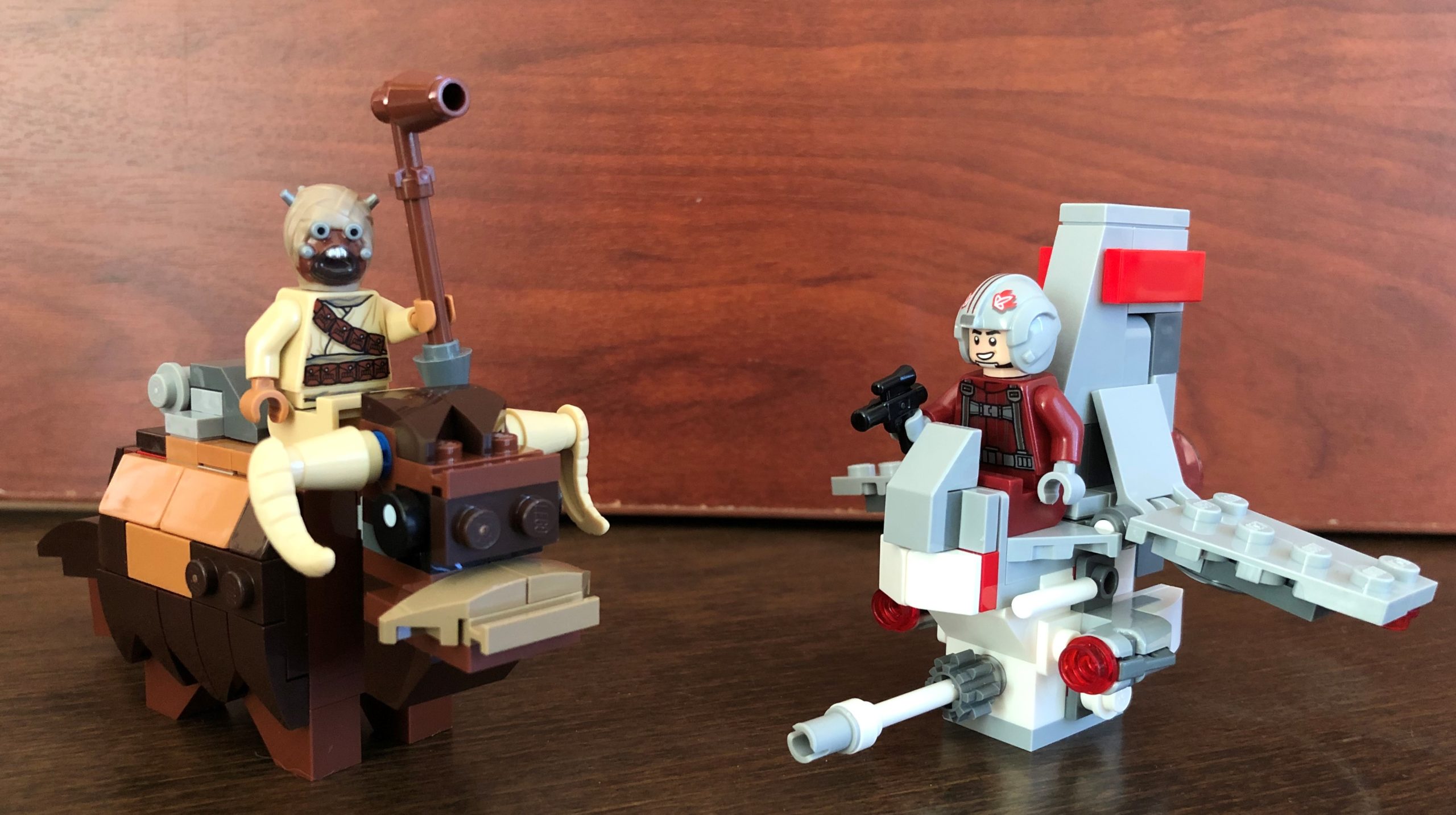 The Skyhopper vs Bantha Microfighters set is a cool little set. Having two separate instruction booklets is a huge plus, especially if you’re thinking about building with someone else. The builds are simple, so it suits fans of all ages. The T-16 Skyhopper isn’t that exciting for me, but it’s probably because I’m not a fan of Star Wars in general. The Bantha, on the other hand, is worth getting. Ever since I saw a custom-made toy of the beast, I’ve been waiting for LEGO to release one in animal form. Who knows, maybe it’ll come in the following years, too.

As for the minifigures… this new moulded head for the Tusken Raiders have been around since 2015, so it’s not brand new, but the torso print is. It comes in only one other set, Obi Wan’s Hut, so if you want variety among your Tusken Raider army, this may be a cheaper way to get it.

While the Tusken Raider figure isn’t very unique, the T-16 Skyhopper pilot figure is. The printed helmet, head and torso only appears in this set at the moment. While the design is very similar to the Skyhopper pilot before him, there are a few minor changes, or improvements, if you will. 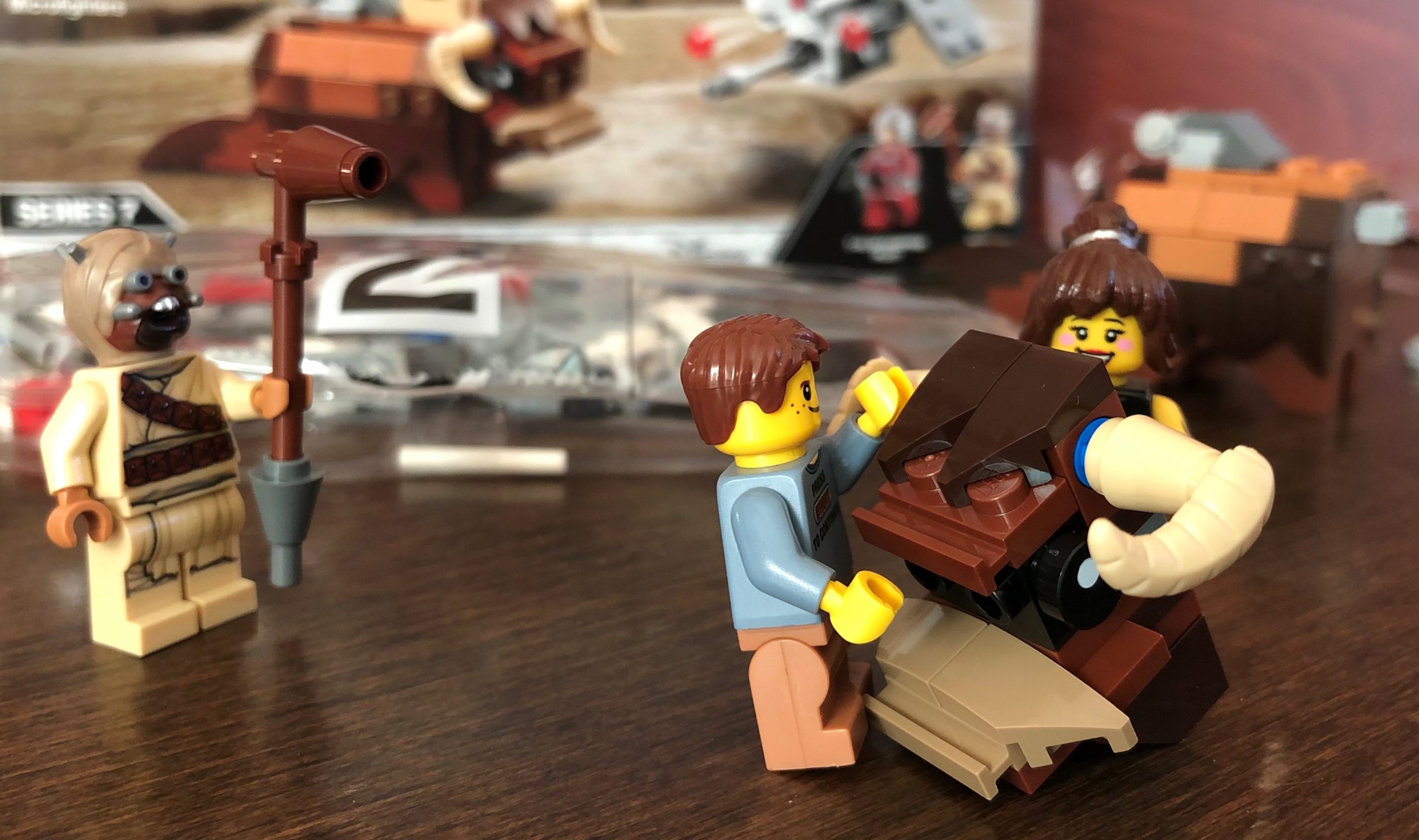 To Buy or Not to Buy?

At a retail price of £17.99 / $19.99 / 19.99€, the T-16 Skyhopper vs Bantha Microfighters set doesn’t look too bad. You get a miniature Skyhopper, a cool brick-built animal, and two minifigures for your collection. If you’ve been collecting the Microfighters series, they’ll make a nice addition. If you’re only in it for the minifigures, you’ll get a few extra pieces for your MOCs. And if you hate Star Wars… well, why are you reading this, then? Sheesh…

Anyways, I hope I didn’t bore you with the non-sense and that the review was at least a little bit helpful. If you have the set, let me know what you think of it down below in the comments section. And of course, may the force be with you! 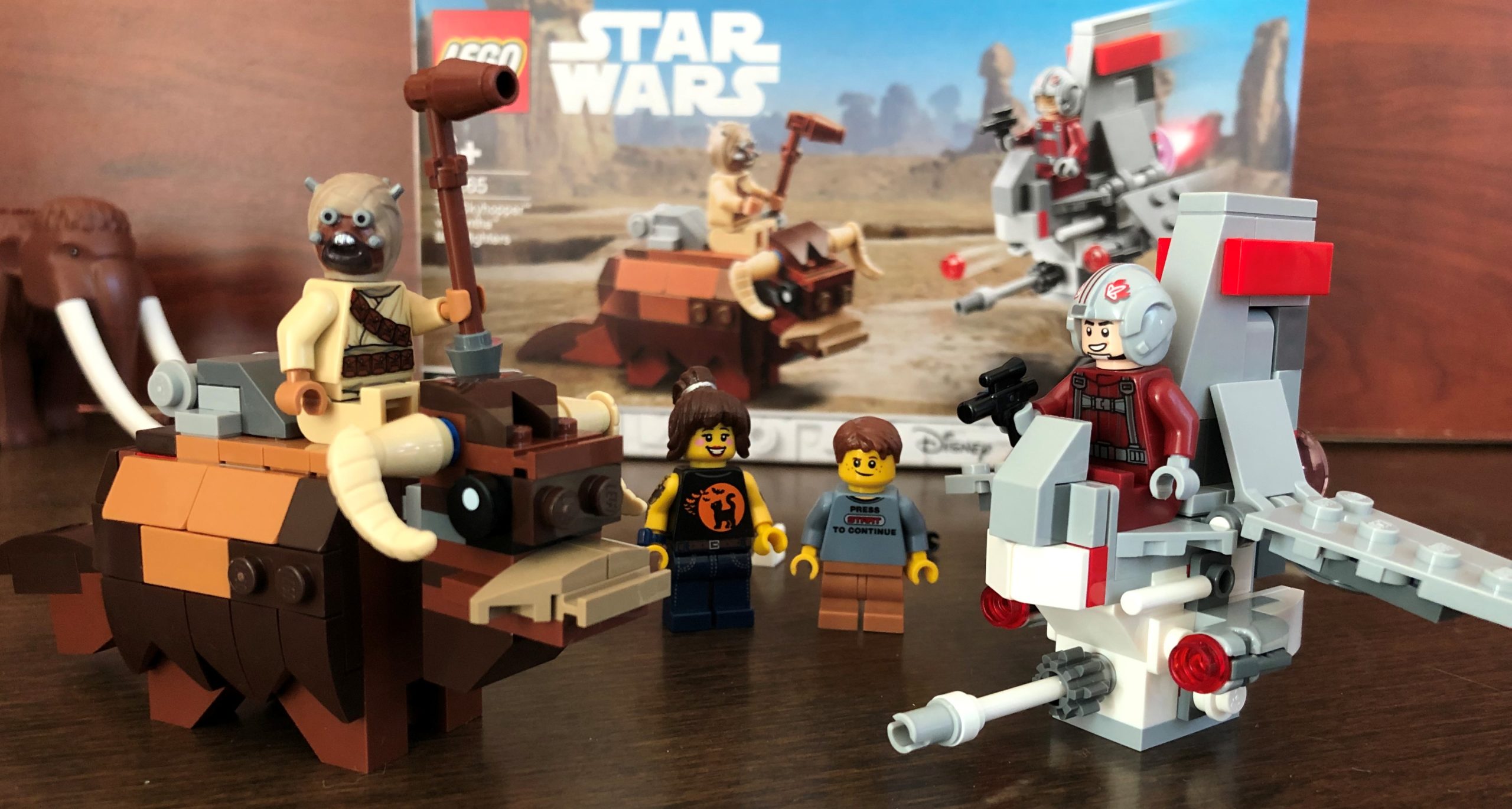 All images are mine except the ones featuring the Ghost, the Millennium Falcon and the Dewback. Those are from Bricklink.