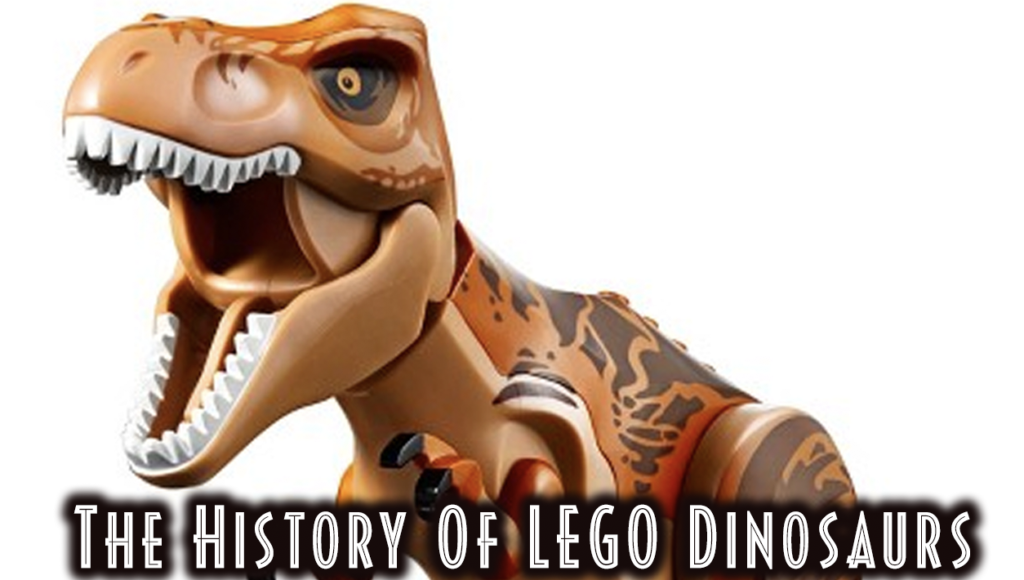 When we think of The History of LEGO Dinosaurs, it is very easy to think of the 2015 Jurassic World line – which brought us a plethora of different dinosaurs in different shapes and sizes. I loved how the JW line introduced us to a new dinosaur hybrid in the form of the Indominus Rex, and brought us our first ever Dilophosaurus – but these were by far the first LEGO Dinosaurs to debut. Back in 2001, when LEGO was exploring new and interesting licenses and themes, we saw the debut of their self-titled ‘dinosaurs’ line – a line which has never returned since.

Before we jump in any further – some of the information in this article was found on Brickipedia. If you haven’t used the site at all, it is a great database for LEGO information – cataloguing all the key information you may need. You can check it out here. 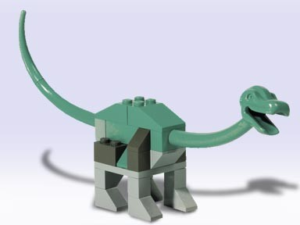 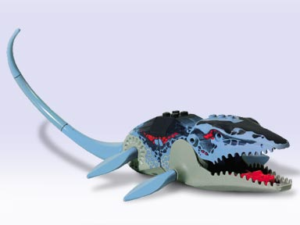 The line also saw the introduction of some baby dinosaurs – designed to be smaller models clicking in at generally smaller piece counts. These included a Baby Ankylosaurus, Baby Iguanodon, Baby Brachiosaurus, Baby Dimetrodon, Young Ankylosaurus, Young Iguanodon, Young Brachiosaurus and Young Dimetrodon – with a dinosaur’s kit also releasing which contained several of these characters. I really adore some of the builds here. Some are a little bit too blocky which is unfortunate, but the Mosasaurus and Brachiosaurus really appeal to me – filling a void which I feel has been left in the Jurassic World line. Despite the prominence of the Mosasaur within these new films, we are yet to see a LEGO one – so this smaller version is a nice substitute for the time being. For toys released in 2001, I still think these stand the test of time. 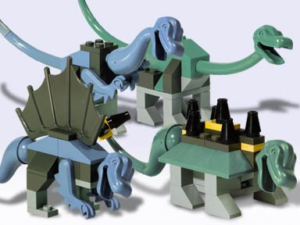 The LEGO Studios line, which debuted in 2003, then proceeded to give LEGO fans their first taste of LEGO Jurassic Park – years before we would ever receive dedicated sets based on scenes within the Jurassic franchise. The branded Jurassic Park III Studio sets left a large amount to be desired, but there were some interesting concepts explored here – particularly with the Spinosaurus attacking the plane in the tree. I do find the sculpts here interesting – as the Velociraptors present in the Raptor Rumble Studio did get better although they are still a far cry from the Velociraptors we see in today’s LEGO Jurassic World line. It is also interesting to note the presence of Johnny Thunder here – providing a taste of 2000’s Dinosaur Island line.

Whilst this line did prelude the ‘Dinosaurs’ theme, I haven’t touched on it in this article – purely because I am not particularly knowledgeable of this license and so do not want to do a dis-service to you by mis-communicating ideas about that license. If you would like to learn more about the LEGO Dinosaur Island line, then there is information out there – so do feel free to head off and join Johnny Thunder for another adventure!

Next up we have the popular Dino Attack line which released in 2005 – referred to as ‘Dino 2010’. This theme conveyed an incredibly destructive, post-apocalyptic-esque dinosaur theme where rugged, military-type individuals needed to use big and bulky vehicles to round up dinosaurs and save the LEGO cities from the prehistoric threats facing them. This really was a time where LEGO were willing to take lots of risks with their sets – and so the dinosaur theme this time around was incredibly militaristic in its nature. We saw ground vehicles which closely resembled US Humvees, and we saw massive aerial helicopters which wouldn’t have looked amiss mounted with missile pods and machine guns.

I love how the minifigures here use militaristic torsos here too – with tactical vests, knives in sheaths and more. This is something which we scarcely see from LEGO nowadays – so it is interesting when we look back and consider the things we have seen in the past which may not necessarily get through today’s standards. It was also interesting looking at how distinctive the designs for these dinosaurs were – with sharp, harsh colours and almost demonic features to them. This was one of the more stylised renditions of dinosaurs that LEGO did – and it is interesting looking back at how these figures hold up compared to the LEGO dinosaurs of today. 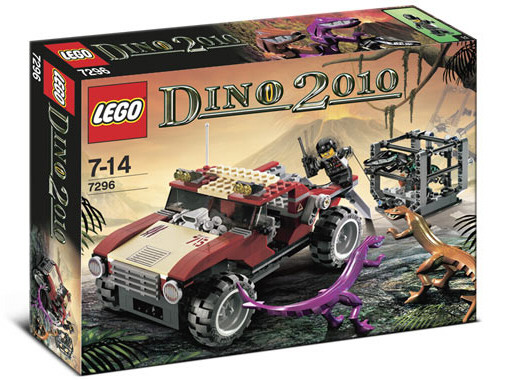 Lastly, we have got the grand-daddy of the modern LEGO Dinosaur lines – the Dino 2012 line. This was LEGO’s last original dinosaur line before the Jurassic World line of 2015 debuted – and this is where several incredibly iconic and popular dinosaur moulds first began to debut. Thanks to the Dino 2012 line, we received heavily articulated and accurate moulds of the Triceratops, the Tyrannosaurus Rex, Velociraptors and more. This line really did set the tone for the depth of detail which LEGO dinosaurs would see moving forwards – providing us with an assortment of fantastic colours and incredibly in-depth moulds.

This line was a perfect combination of capture vehicles and creative enclosures – and it felt as though it was inspired by Jurassic Park, lending heavily from some of the fantastic elements which LEGO fans had wanted. I also loved the unique prints on the minifigures here, again, with an emphasis on the use of tranquilisers this time around. I always remember wanting 5887 Dino Defense HQ as a child – as the idea of this big, fenced-in property always fascinated me – and to this day, this is one LEGO set which I really hope I will be able to add to my collection. 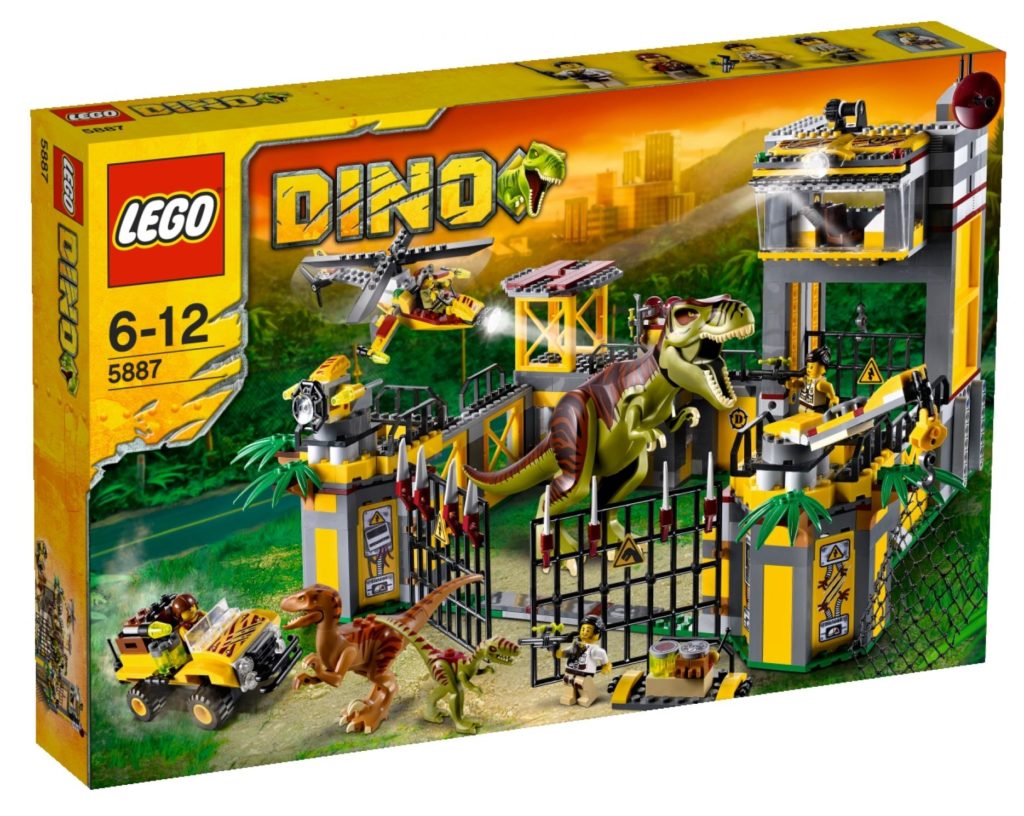 So, clearly LEGO has had a lasting relationship with dinosaurs for many years. Some of them have left quite a bit to be desired, whilst others have really hit the mark – providing both adult collectors and children with adorable, brick-tastic renditions of their favourite paleo-pals. I always find it fascinating looking at the Dinosaurs we have received in the past – particularly as it is apparent that LEGO really did not hold back with the variety of dinosaur species available in 2001. Whilst we don’t see nearly as much variety in the modern day, I am hopeful that one day we may see more – as dinosaurs like the Brachiosaurus, Stegosaurus and Ankylosaurus would fit right at home within the LEGO Jurassic World line. With such great sets releasing for the Legend of Isla Nublar Jurassic World sets, I truly am hopeful that we will see even more sets in the future.

What do you guys think? Do you have a favourite LEGO dinosaur? Let me know in the comments below – and have a fantastic Jurassic June!

Don’t forget to check out Pinar’s ‘Evolution of LEGO Animals’ – a great article which touches on the progression of LEGO dinosaurs, and much, much more!

The Best LEGO Design Software: So many options, so little time