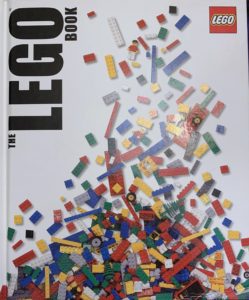 The LEGO Book, first published in 2009 by DK, written by Daniel Lipkowitz, is a massive, 200 page exploration of all things LEGO. LEGO began in 1932 with the founding of a wooden toy company. The LEGO Book traces the origins, history, and modern day look of the LEGO Company.

Ole Kirk Kristiansen believed that “only the best was good enough”. He believed children should have the highest quality toys possible. His son believed this so much that he carved a wooden sign saying that. He hung it in his father’s workshop. That was the inauspicious beginnings of one of the biggest toy companies in the world.

The LEGO Book begins talking about the family business and the difficulties Ole Kirk had in starting the company. Three generations of the Kristiansen family guided LEGO from wooden toys to the plastic bricks we all know. A wonderful timeline is situated throughout the book to trace all the firsts and major milestones of the LEGO Company. For instance, the first workshop was purchased in 1916. It burned down twice, in 1924 and 1942, but by 1943 Ole Kirk had 43 employees and in 1949 the LEGO brick was manufactured. By 1952, the first LEGO manufacturing plant was built.

Have you ever wondered where the term “LEGO System” comes from? I know I have. Turns out, Ole Kirk wanted a connected system of play, an integrated whole with many parts or sets within it. Ole Kirk Kristiansen created an entire LEGO town center, a system for play, containing a gas station, hotel, and other buildings, all sold separately. In 2008, for the 50th anniversary of the LEGO brick patent, LEGO released an updated version of this town center. Only the buildings in this original town were traditional LEGO. The signs, cars, and people were all pre-molded plastic. 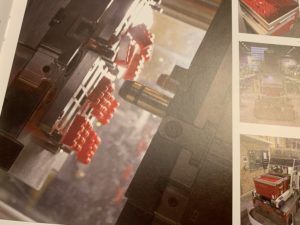 But from there the company grew and diversified the LEGO elements. The 1970’s were huge for the LEGO company with the creation of the minifigure in 1978.

The LEGO Book then chronicles the LEGO brick itself. According to a graphic “six eight stud LEGO bricks can be combined in 915,103,765 ways” and after that the combinations and possibilities are seemingly endless. The book shows how bricks are made, and details the process. It is fascinating to see the giant machines and read how a single billet of plastic becomes the various bricks in my collection!

After that, a large section of the book is devoted to the unique and varied themes within the LEGO system of play. From City and Town to Space and Pirates to Ferrari and Star Wars, LEGO has certainly grown from wooden pull toys and a blocky town center. I didn’t know that LEGO and Disney go back much farther than I imagined. I thought that the first Disney licensed toys were the recent Disney Castle and other Disney sets. Not so! In 1999, LEGO made Duplo Disney. But their collaboration goes even farther still! Turns out that in 1956, LEGO produced inflatable bath rings featuring Disney characters, and a traditional wooden pull toy of Pluto, Mickey’s faithful dog. Some companies were just meant to be together, I guess!

Theme parks are next, and again, I figured this was a recent foray for LEGO. However, in 1968 in Billund, Denmark, the first LEGO theme park for LEGO was opened to the public. Now they are in other countries, including the US, UK, and Germany.

The final part of The LEGO Book is entitled “A LEGO World” and tells how LEGO became ubiquitous to many around the globe. I certainly remember growing up in the 1980’s and 90’s thinking that LEGO was just part of things, much like other mega franchises such as baseball and Star Wars. LEGO was just part of life. The book talks about LEGO Designer (forerunner to LEGO Ideas), LEGO video games, and more. I loved reading about another LEGO character I was familiar with growing up: the LEGO Maniac. He was introduced in 1989 and was called Jack. But by the time I knew him, he was just the LEGO Maniac. Similarly the LEGO catalogues and fan club evolved.

LEGO Master Builders also get a feature in the book, with a section on the design and building of the large mega LEGO sculptures that pop up from time to time inside and outside the theme parks and LEGO Discovery Centers. Finally there is a page on LEGO artist Nathan Sawaya of “The Art of the Brick” and LEGO fan creations, often called MOCs or “my own creations”. I absolutely love that LEGO makes a shoutout to the fans and their billions of unique creations. It would be easy for a toy company to focus only on their own products, and granted, a large portion of this book does so. But LEGO and any other company would be nothing without their customers, and therefore it is great for them to acknowledge it. 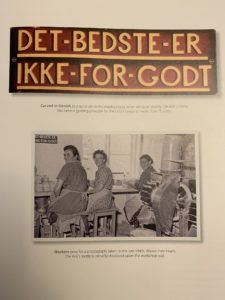 The LEGO Book is a fantastic, fully illustrated look inside the wonderful system of play that is the LEGO brick and beyond. I enjoyed very much poring through the early history of the company, and linking up the timeline to world history. It was fun to see how a company grew beyond wood and plastic because a family was dedicated to providing the best play experience they could. LEGO has greatly enriched and directed my life, and I am grateful to them. The LEGO Book gave me more room to explore the brick and company for myself.

It should be noted that the version of the book I reviewed was the first published version in 2009. The most recent update, 2018, includes an exclusive brick! Whichever version you check out, I am sure you, like me, will learn much about the LEGO Company and be re-inspired to dig into your collection and create something new in the more than 915 million ways the bricks can be combined. I know I will!

Share with me what you create in the comments below. As always, I look forward to what we can build together!