And… we’re back with more Marvel content. Yes, I am now, and will forever be known as the LEGO Marvel guy on the Firestar Toys blogs. So to continue the infamous top 10 lists that get all the clicks, and the top 10 LEGO Marvel sets of all time (which you should go check out!), today we’ll be bringing you the Top 10 Best Marvel Minifigures of All Time!

Again, we must go through the disclaimers. Everything said in this article is my opinion. So it’s fine to disagree with me. I personally chose each of these figures, as I believe they are the best of the best from this theme. So please don’t throw a fit and send me death threats on my Instagram. I’m literally in exam week right now, and finished one exam. Now I have 2 more in the next two days, plus an interview. I don’t need the stress of riots at my door because I didn’t include the OG Captain America from the first Avengers sets (which I didn’t).

Back to it. I will also only be including minifigures that have been released in retail stores and are/were widely available. Therefore, no SDCC figures. Also, no microfigures such as mini Ant-Man. However, I will include big figs. I feel like I’ve been making disclaimers for every article. Surely they aren’t that controversial, right? Anyways, you got all of that? Alright! Let’s do this!

Starting off at number 10 is the Ms. Marvel. Released in 2017, this minifigure remained exclusive to the $30 USD set she came in. Personally, the driving force of me buying this set was this Ms. Marvel minifigure. Can you blame me? She was awesome. Firstly, her hairpiece just suited the figure so well – as depicted in Marvel comics. She came with a dual-sided face print, with just such expressive faces.

However, the biggest thing (literally) about this minifigure, was her newly moulded torso. I mean, it was a regular LEGO torso, but a new, long, rubbery piece was infused into the arms. Why? Well, in the comics, she has stretching abilities, like Plastic Man and Mr. Fantastic. Therefore, this long tube was supposed to resemble this ability. And it came out well. At the end of each side was a regular minifigure hand. And LEGO gave us two glove pieces go further resemble her powers – that her palm has grown. This flex tube could be bent, shaped, and pulled. I mean, LEGO went all out with this figure. Finally, LEGO gave her a very comic-accurate torso print, which continued onto her legs. Overall, this figure had amazing detail, and I couldn’t be happier with it. 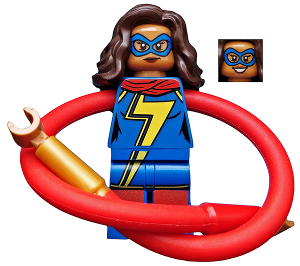 LEGO has released a lot of variant minifigures for Iron Man. And for good reason! He’s arguably the most popular Marvel hero now, besides Spider-Man. So we’ve gotten so many Iron Man minifigures. You’d think we’d be sick by now? Well… think again. Marvel themselves has done all the leg-work. They’ve designed over 100 Iron Man suits, in the comics and in the movies. All LEGO has to do is just copy them into minifigure form.

There have been countless unique-looking Iron Man variants. One of them is this Space version. It’s the only Iron Man figure to ever come with a white moulded helmet piece. The gold face plate just complemented it well. Again, the base colour of the torso and legs were white, with grey and gold accents. The detail ran all over its torso to its legs. This was just such an amazing version to get. And if LEGO continues to do unique versions like this, I’m all for more Iron Man figures in sets! 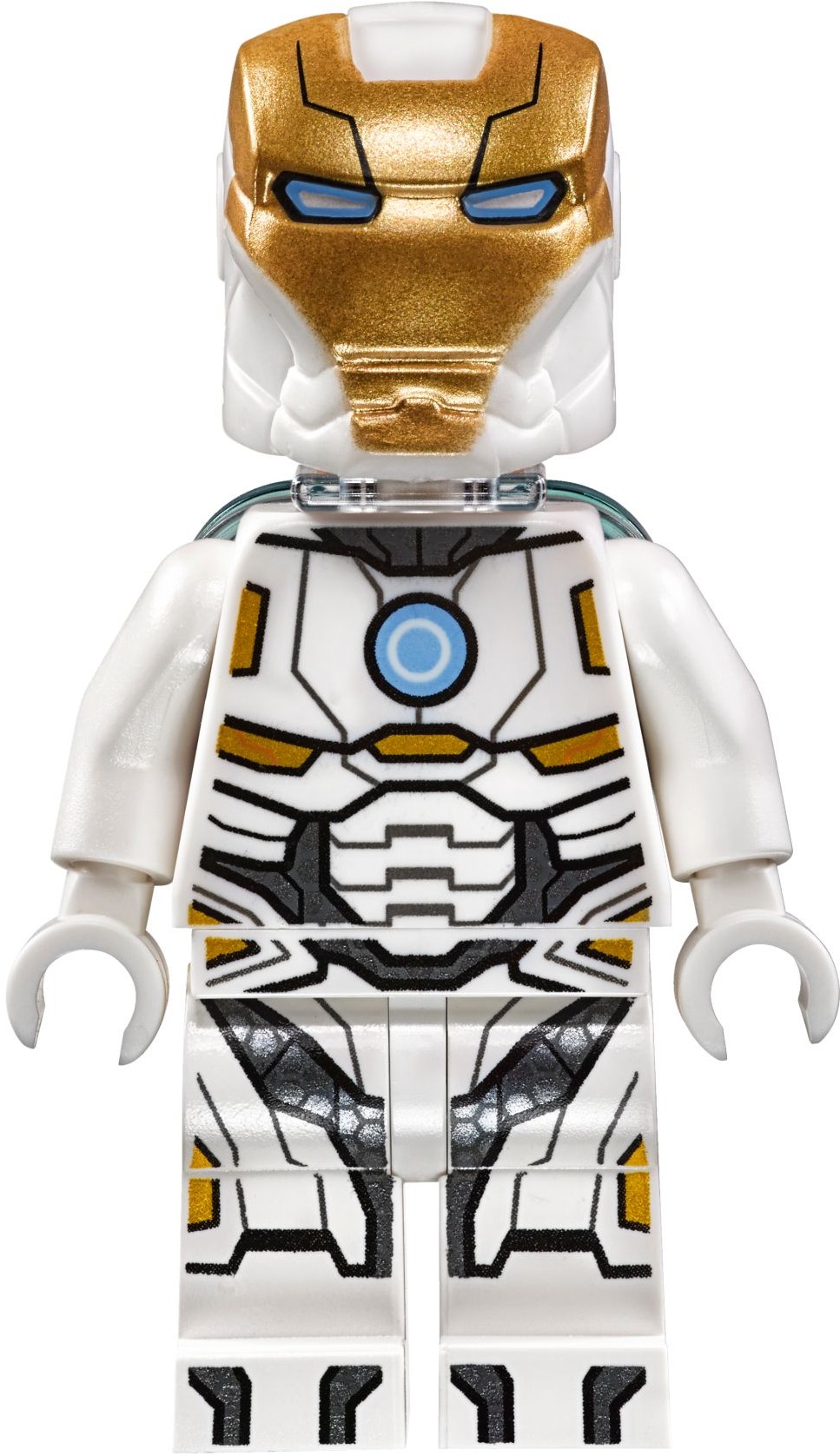 When someone asks me how much detail I want on a LEGO Marvel figure, this is it: The 2015 Carnage. Ok, let’s start with the face. Wow. That face print was menacing. It was terrifying. It resembled the Carnage character from the comics flawlessly, while still giving it that LEGO feel. The detailing on his torso and legs was impeccable. It was a basic muscle print that most figures get. However, the designers layered it with this gooey, black detailing – which was of course accurate. I mean, it even had foot printing.

But the stand-out of this figure was its arm print work. That gooey detailing that I just explained, it continued onto the figure’s arms. Remember, this is the same team that brings us more than half of all figures without basic leg printing. We need more detail like this. And yeah, he had a back attachment to elongate the symbiote that was attached to him, which gave it that extra menacing effect. Although it is one the most detailed LEGO Marvel figures to date, I believe that other minifigures, in my opinion, are cooler. 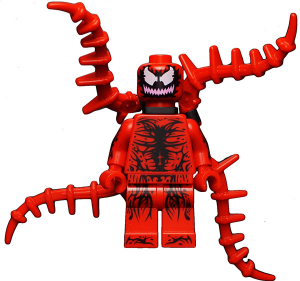 This is the most recently-released figure to date on this list. And yet again, it’s another Iron Man minifigure. Come on. Can you blame me? The purple colour scheme is just magnificent. Although it uses the one-piece Invincible Iron-Man helmet, it still works for the design. This version of the suit is based off Avengers: Endgame, during the final battle, where Pepper Potts finally wears an Iron Man suit. Sorry for spoilers, I guess? I mean, if you’re even a semi-Marvel fan, you would’ve seen the movie by now. It’s been one and a half years already!

Anyways, the purple, blue and gold printing on this figure is so accurate to the actual suit, and it just looks beautiful. The set this figure comes in is still available in stores

. So, if you want it, go buy it now, while it’s still cheap. Because I can bet you, once the set retires, this figure, like all other Iron Man figures will skyrocket in value. 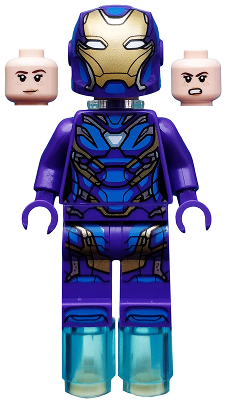 There’s definitely a trend going on here. Three of the five spots in my best LEGO Marvel minifigures list are all Iron Man minifigures. But again, LEGO keeps creating new, unique versions, so at least some of them have to be amazing. This suit was a base colour of teal. Using the metallic red printing for its mask, it just looked beautiful. The torso and leg printing were, again, on point. To match its appearance in comics and its short cameo in Iron Man 3, LEGO bulked up the figure by giving it an armour piece, and a printed 1×1 circular tile on the front. I can’t stop praising these Iron Man figures, can’t I? 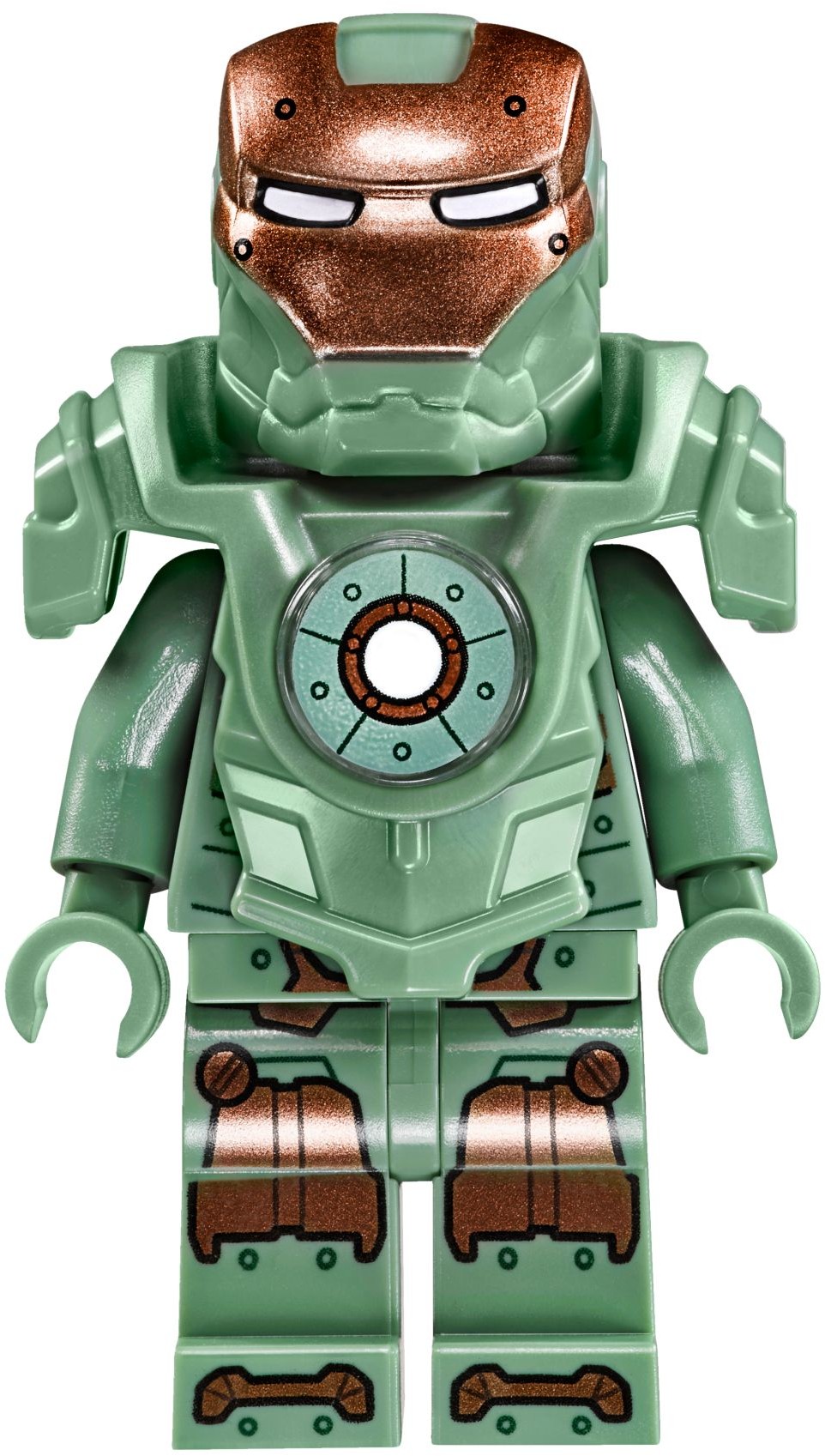 And that’s time for today! This was originally going to be a one-parter, but as I kept writing, I knew I couldn’t do each figure justice by just running through each. Again, this is all my opinion, so we shouldn’t get into a heated debate on which is better. Everyone has biases and reasons for their choices. And so do you. Anyways, stay tuned for Part 2 of best LEGO Marvel minifigures, coming out next week! Peace!