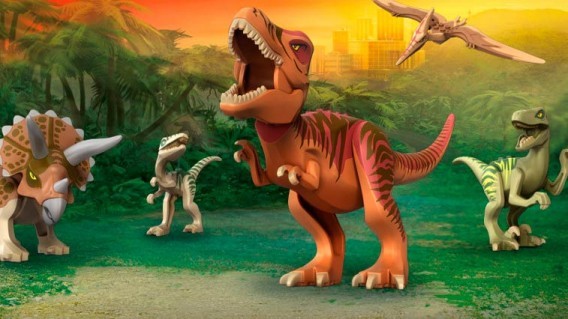 As we’ve discussed in previous posts here on the Firestar Toys blog (check out Pinar’s piece on LEGO Animals, and mine on the history of LEGO Dinosaurs), there are a ton of different dinosaur moulds from different times in LEGO’s history. These range from everything from 1-piece, singular sculpts, to multi-facet pieces with a massive range of articulation and pose-ability.

I wanted to take the time out to break down the sculpts of my top 5 LEGO Dinosaurs – and why I like them so much. I do want to note that the only dinosaurs I own are from the 2012, Jurassic World and Jurassic World: Fallen Kingdom lines, so this may be a little bit biased. But, if you can deal with that, then I think you’ll find this quite interesting! I mean… I hope you will.

Anyway, let’s get into it. 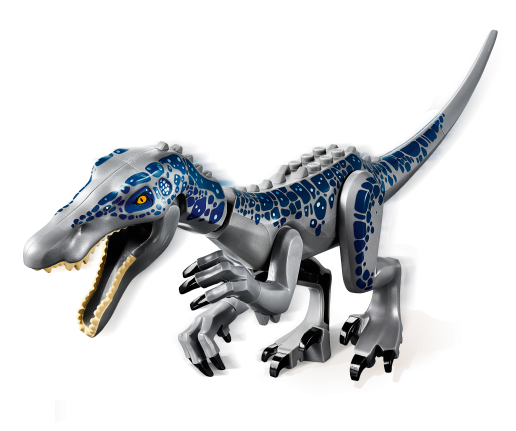 For my number five spot, we have the Baryonyx – a dinosaur introduced in the 2019 LEGO Jurassic World: Legend of Isla Nublar sets. Now, I distinctly dislike the Baryonyx itself – but I have more chosen this dinosaur because of the body it uses, which is that of Fallen Kingdom’s very own Indoraptor. The Indoraptor would have filled this spot but it is not technically a dinosaur, and I wanted to make sure that we stayed true to the purpose of the article.

Still, the Baryonyx does use the same body – and I like how this is a medium theropod body, something which we had not really seen in the ‘modern’ LEGO dinosaur line before 2018. It provides a lot of scope for additional possibilities – and I would love to see an Allosaurus or a Juvenile Tyrannosaurus Rex released using this mould, or an altered version of this mould, in the future. The slender musculature in the sculpt is fantastic – and really could lend itself to a variety of different animals.

The reason why this only gets my number five spot, however, is because the rest of the dinosaur is unfortunately rather disappointing. The Baryonyx, for starters, did not have sickle claws like Velociraptors or the Indoraptor. Unfortunately, LEGO opted to re-use the whole body here, and that meant the inclusion of unrealistic legs with the sickle claws included. Whilst they don’t detract massively from the character, they are still detrimental to its overall appearance. I also am not the biggest fan of the Baryonyx’s net and snout as the proportions feel a little cartoonish – but this could just be the unique LEGO style. With these detractors considered, however, it is still an awesome dinosaur – and is one which I would have never expected to have seen ten years ago. With that in mind, it’s a great addition to the LEGO Jurassic World! 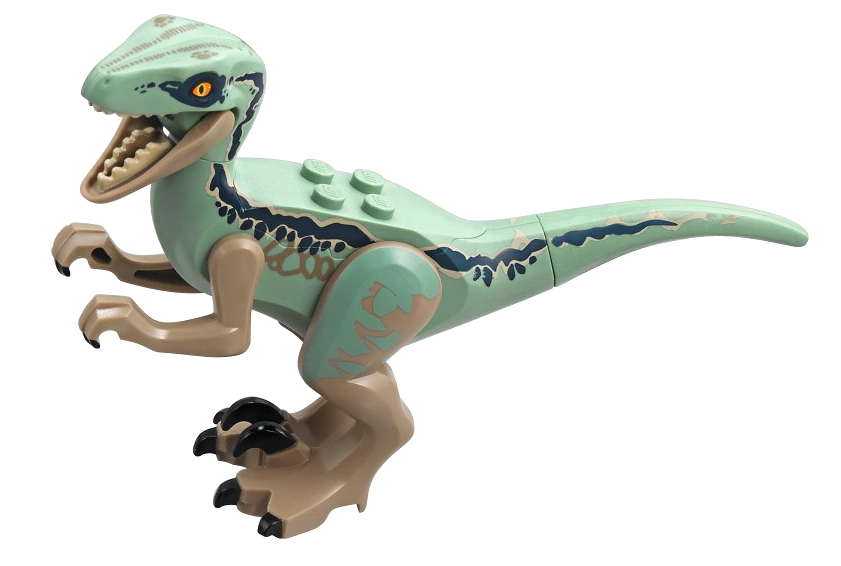 Ah, the LEGO Velociraptor. Clearly inspired by Jurassic Park’s creative decision to make the portrayal of the Velociraptor much bigger and larger than a turkey, LEGO’s velociraptors are large, bulky characters with big muscles and intimidating snarls. There is a lot to love with the LEGO rendition of a Velociraptor. The arms and legs feel incredibly proportionate to the overall body of the creature, and the curved sickle claws capture the key identifiable trait of the Velociraptor perfectly. I also love how well scaled the head of the Velociraptor feels here – as LEGO still manage to pack in rows of jagged teeth between opening doors whilst keeping the overall scale consistent across the figure.

Combine this with the fact that we have seen numerous variants of Velociraptor with beautiful prints over the years – ranging from Jurassic World’s colourful Raptor Squad to Dino 2012’s rawer, jungle-esque dinosaurs and it is clear to see why these continue to be such popular characters within the modern era. I do also adore how LEGO’s velociraptor’s have seen changes in their eye printing over the years – with Dino 2012’s looking quite evil and menacing, whilst Jurassic World’s are rounder and more realistic. It’s a small detail – but it’s a nice touch which I feel shows even greater iteration in these characters over the years. 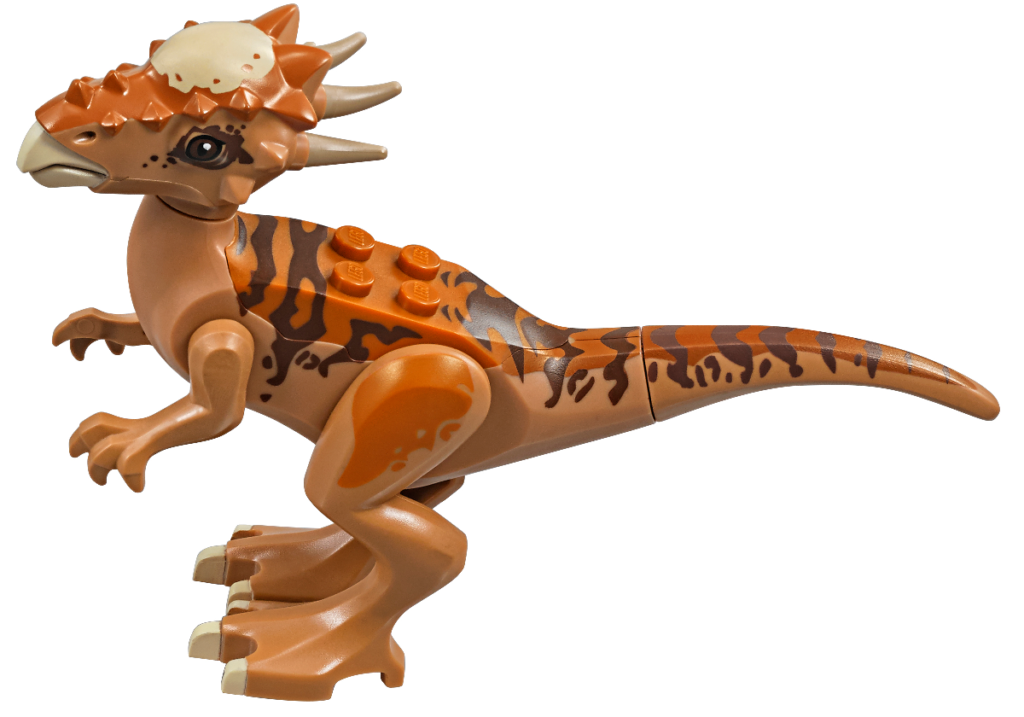 At number three we have a unique new herbivore from the Pachycephalosauridae family – the Stygimoloch. The Stygimoloch is a unique dinosaur with a bone-crest, which it is believed would have been used in a defensive manner to allow the dinosaur to attack carnivorous predators who may have been hunting it. The Stygimoloch is related to its more famous cousin, the Pachycephalosaurus, and is unique in that is the first herbivorous theropod to join the LEGO dinosaurs’ line-up.

I adore how the Stygimoloch is a similar size to the Velociraptor – as it allows the dinosaur to fit in nicely with the other dinosaurs available in LEGO’s various line-ups. Stiggy makes use of the Velociraptor’s body, and the legs of the LEGO Dilophosaurus – but it has new arms and a new head, complete with removable horns, which helps to give it its own unique character. I am always going to love the Stygimoloch – not just because it was a great character in Jurassic World Fallen Kingdom, but because LEGO herbivores come few and far between. It can be hard to make a ‘peaceful’ dinosaur exciting to children – so when we do get them in LEGO sets, it truly is something special. 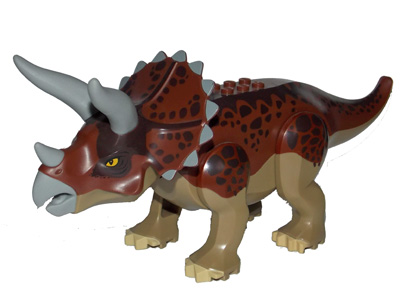 That little sentence about LEGO herbivores being so special leads me nicely into my next choice – the LEGO Triceratops. This figure is more special than anything because of its distinct absence from the LEGO Dinosaurs for over seven years. Released in 2011 as part of the Dino 2012 line, we saw a fantastic new Triceratops – complete with independently articulated legs and a ball-jointed neck, as well as a beautiful crest and an intricate print detailing throughout the character. This really was the pinnacle of LEGO’s brand new dinosaur system – creating a dinosaur which seemed to take full advantage of its brand new sculpted details.

Given the amount LEGO invested in this mould, fans were shocked to see that it did not return in the 2015 LEGO Jurassic World line, or in the 2018 Fallen Kingdom line. There were whisperings behind the scenes that perhaps the mould had broken – suggesting that we would never see the LEGO Triceratops again. Luckily, these rumours were put to bed once and for all when LEGO re-released the fan favourite dinosaur in 2019, donning an all new colour scheme for the Jurassic World: Legend of Isla Nublar sets.

The new lick of paint combined with the consistently incredible work by LEGO’s sculptors continue to make this one of my favourite dinosaurs to this day – and it is one which I would ADORE extras of some day! 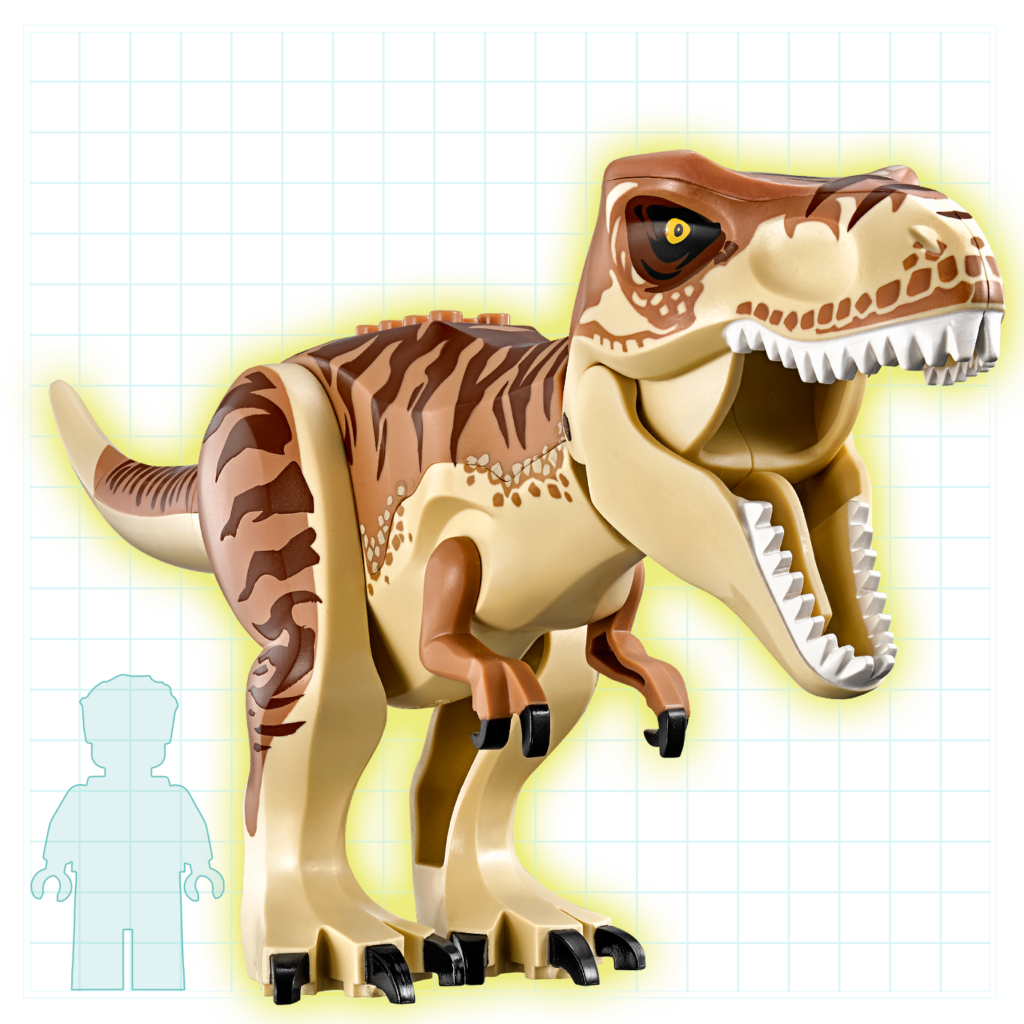 The Tyrant-Lizard King, and the king of the Jurassic jungle, rules king of this list too.

The Tyrannosaurus Rex, more commonly referred to as the T-Rex, is arguably the most popular dinosaur to have ever been unearthed by palaeontologists. For generations, we have all admired the sheer scope and scale of this gigantic beast, and it is no different in LEGO form. Dwarfing your average LEGO minifigure, the LEGO T-Rex truly is an incredibly sculpted character. The head sculpt of the Tyrannosaur is particularly impressive – with jaws which open wide enough to simulate swallowing any minifigure, and great depth to the eye sockets and snout which really help to bring this character to life. I also love how the T-Rex’s comically short arms are captured here, and then love how the legs of the creature exude strength and muscle. It’s an incredibly impressive sculpt which has seen many different printing patterns and colour schemes over the years.

When it comes to recreating something, which is incredibly culturally popular, you must do it justice – and LEGO certainly did here. This explains perfectly why the T-Rex continues to be one of LEGO’s most sort-after animals on the aftermarket today. 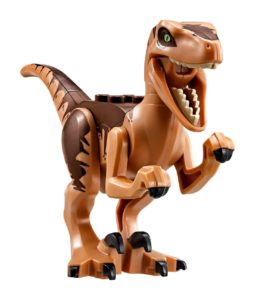 What did you think about my choices? Do you have other favourites – like the great Carnotaurus, or intimidating Indominus Rex?

I’d love to hear your opinions in the comments below. Thanks for reading – and I hope you are having a wonderful Jurassic June!