Quarantine is now well and truly underway. If you’re not an essential worker, you’re likely doing your part to flatten the curve of the virus by staying at home, minimising contact with others, and staying up to date on your country’s latest developments. 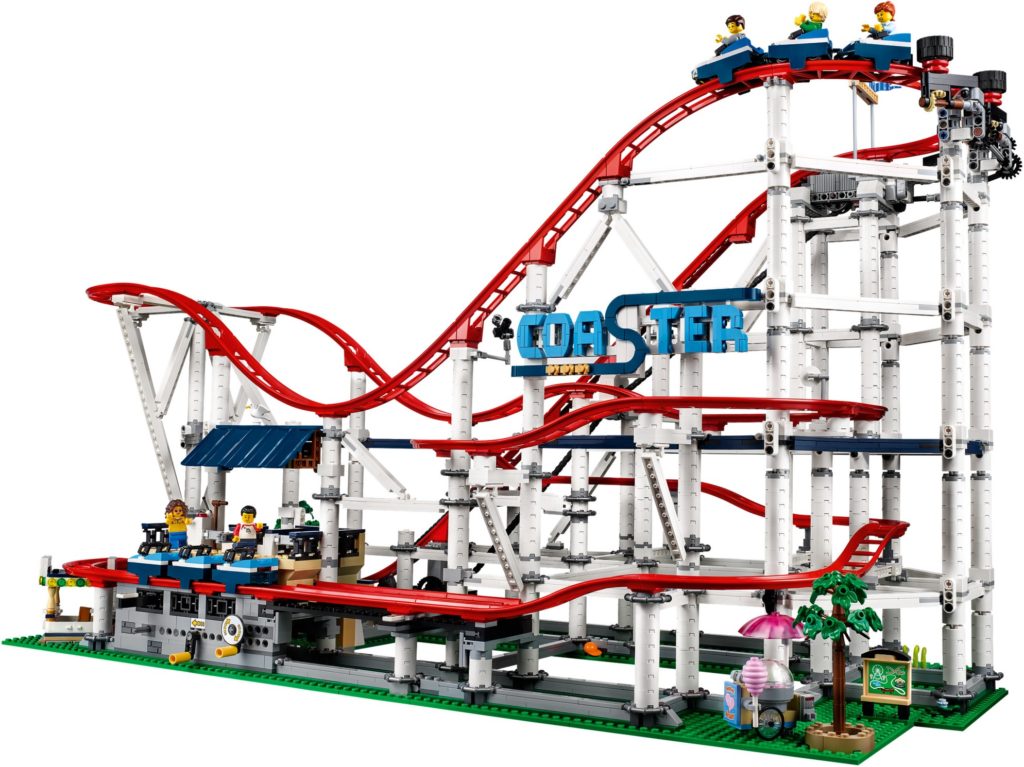 You’re also probably either starting to go out of your mind with boredom, or finding build projects to get on with. I thought I’d share an idea that’s been on my mind for a while, one that might be perfect for an AFOL under lockdown who’s looking for time-consuming, brain-tingling undertakings to see them through to when normality hits.

Y’all ever hear of this theme park called LEGOLAND? Owned by Merlin Entertainments (who are in turn now owned by a consortium of LEGO officials), there are 9 LEGOLAND parks worldwide, with another 3 under construction to open in 2021 and 2022. There’s even a video game, released in 2000, where you can digitally design your own park!

So theme parks are in LEGO’s very DNA, and accordingly they have made a whole host of sets over the years, crossing from Creator to Friends and even DC Superheroes. But I’m sure to many, that simply isn’t enough. If you’re building your own LEGOLAND, a few attractions building around 10261 Roller Coaster is probably too small, right? Where’s your sense of grandeur?

Here are a few sets that I think are just screaming to be turned into attractions for a theme park build.

A Pirate’s Life for Me! 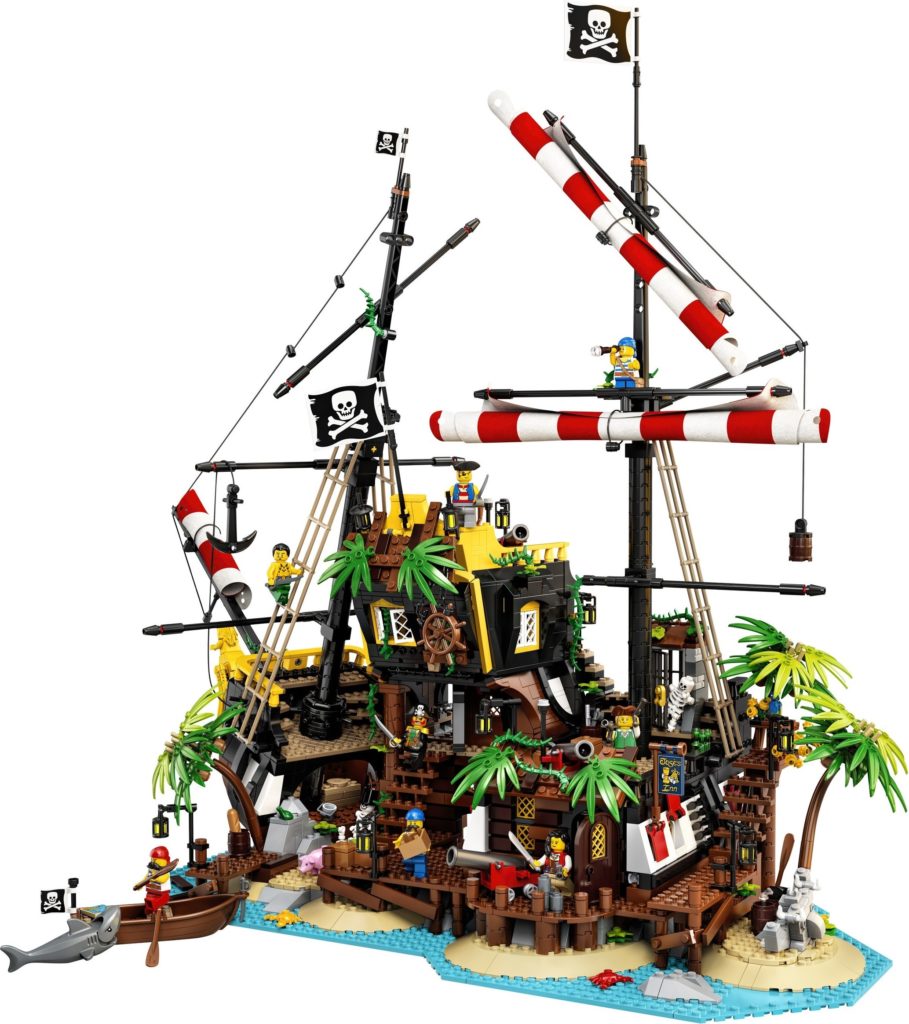 The LEGO-verse has been abuzz lately with the release of 21322 Pirates of Barracuda Bay, the latest set from the Ideas theme. 10,000 people voted on this incredible design, and I think it’s the perfect place for us to start our new LEGO theme park. Indeed, LEGOLAND itself has a whole Pirates area, so it seems fitting!

The set itself is an absolute joy, and I can understand that an AFOL might be hesitant to pull it apart. It’s essentially a pirate hideout and tavern built around a shipwreck, and it’s packed full of so many amazing little details (including a stone Islanders monument buried in the sand)… but the ship elements can also be removed to remake the ship itself!

Now for this, I’d recommend actually leaving the shipwreck as a wreck, and building your attraction from there. Disneyland Paris has a walk-through pirates area surrounding its Pirates of the Carribean ride, immersing you in the period, but I think we can do better than just a walk-around. I think Barracuda Bay could make a great ride in itself. 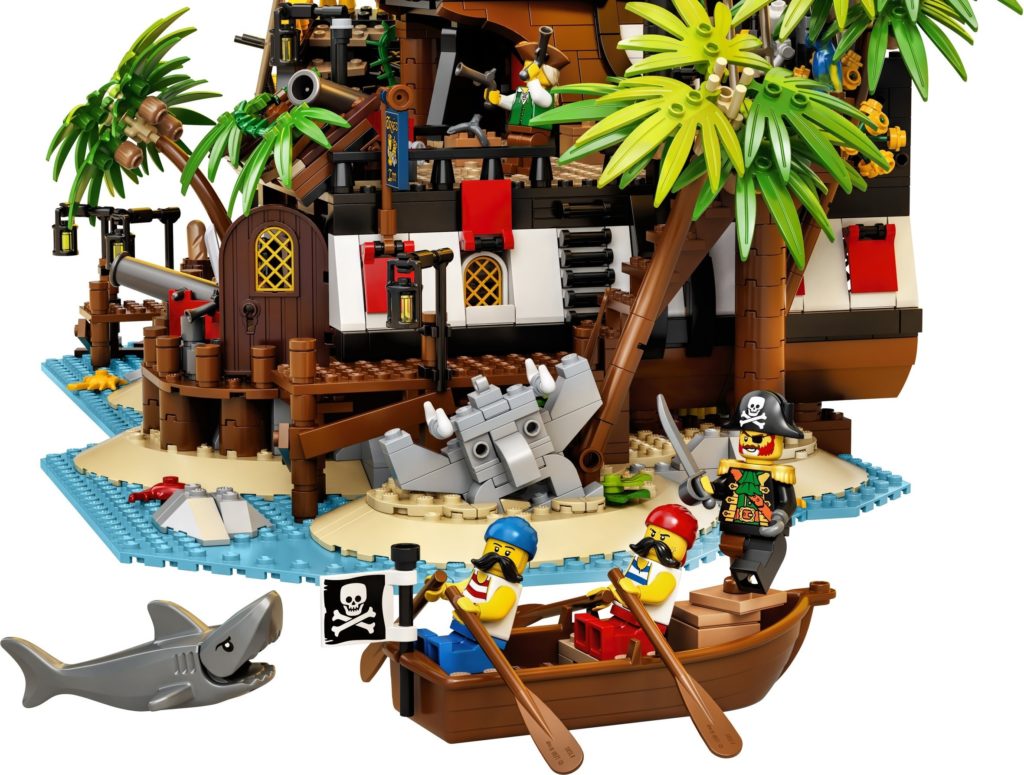 The build is actually several layers – the water, the first wooden walkway, the roof of the tavern/front of the ship, and the top deck of the ship, making it perfect for a small roller coaster! One could easily take the new roller coaster rail pieces and twist them around these layers for a short but fun ride around the Barracuda Bay.

If you wanted to extend the ride, LEGO is releasing 31109 Pirate Ship later in the year. It’s a Creator 3-in-1 set, and while no official images exist yet of its alternate builds, one of them is rumoured to be a small, skull-shaped island, a perfect extension for the Barracuda Bay ride. Into the jaws of death – literally!

Here in the UK, one of the biggest theme parks is actually also a zoo – in fact, Chessington World of Adventures first opened in 1931 as a zoo only, with the theme park attractions being added in 1987. Disneyworld Florida also boasts its own safari park, so why not add one to your own LEGO theme park?

LEGO’s catalogue of pre-fabricated animal pieces has exploded over the past few years. In the mid-2000s you might have been able to add an elephant, a scarlet macaw, a monkey, some spiders and a shark to your menagerie, but today is a different story. There are bears, mountain lions, camels, flamingos, leopards, chameleons, swordfish, tigers and tiger cubs and practically a whole real zoo’s worth of animals to choose from.

Now, before you turn your eyes up at the idea of using DUPLO for a MOC, take a look at this amazing Zoo subtheme. Look past the simple builds and you’ll see that DUPLO have been making giraffes, pandas, lions and polar bears of their own for years now. The scale of some of them seems just about right to include in a minifigure scale safari, so that might be worth pursuing too!

This if of course to say nothing of simply picking up some bricks and building your own! There, the sky really is the limit. Why not build a giraffe or a zebra? 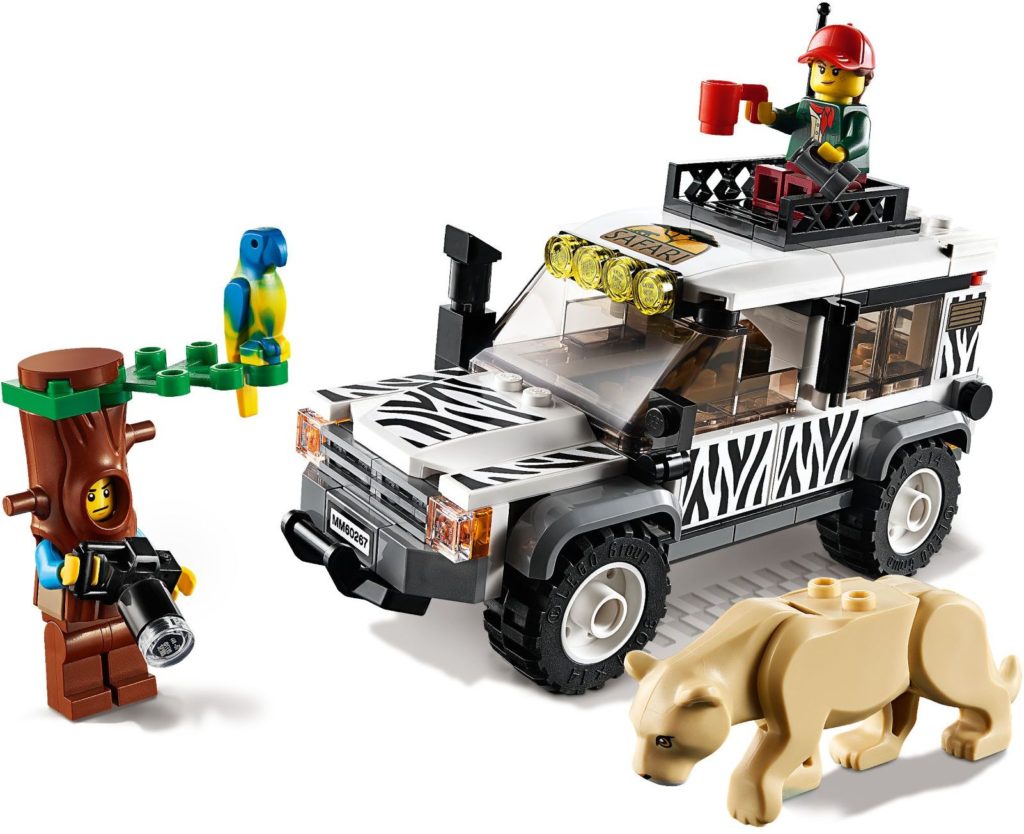 In January 2020, LEGO released the perfect set to compliment all of these ideas: 60267 Safari Off-Roader. This zebra-striped 4×4 is very reminiscent of a jeep, complete with snorkel and rough-terrain tyres, and while the set’s box art shows it in the middle of a savanna, it would work just as well for driving visitors around a LEGO theme park’s zoo – it even has a big “Safari” sticker on the roof, a little bit of park branding built-in for you!

In terms of modifications, to give visitors the best view of all the animals, there’s very little to do here. Perhaps remodel the back so that you can fit two passengers in, not one, but other than that it’s already just about ready to go. You might also want two, depending on the size of your safari park.

The set also comes with a parrot and a lioness, so this would help boster your zoo considerably! The lioness is the same design as previous City cheetahs and tiger but absolutely looks the part, and I’m sure would be a delight for any minifigure visitors to see.

All Aboard the Ghost Train 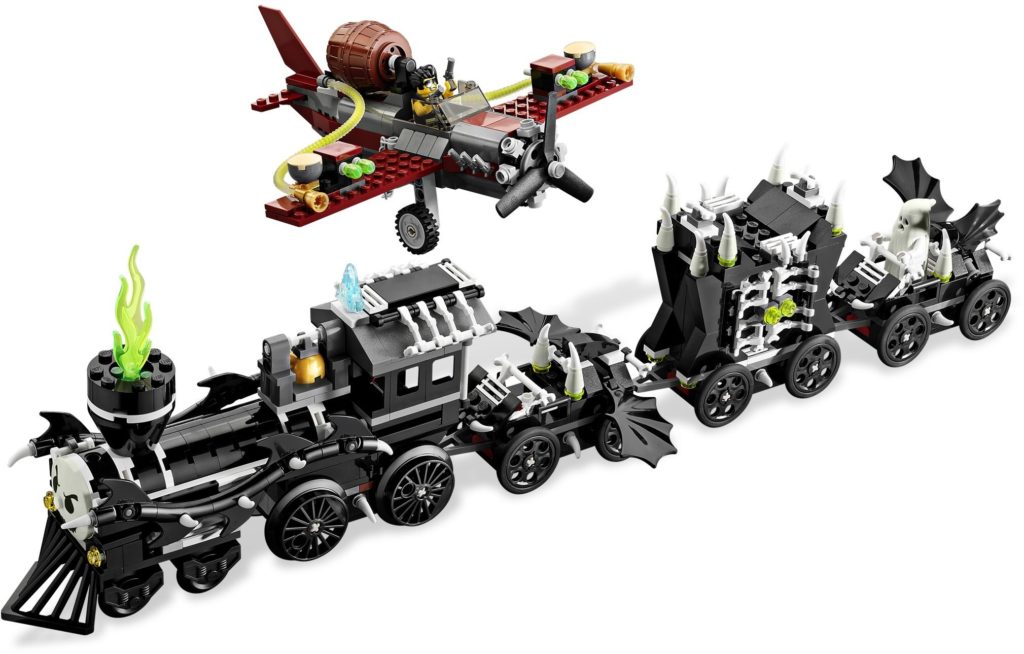 Plenty of park-goers love a scare, and one theme park tradition is a haunted mansion or a ghost train. Fortunately, LEGO has provided builders will ample opportunities to get the parts for both of those things (or even a combination of the two).

What is a ghost train? Well it’s like many a theme park ride: you sit in an open carriage and are taken through a creepy maze of spooky sights and sounds. Sometimes called “dark rides”, you can expect to have mummies and ghouls jump out at you, 3D illusions of ghosts drift across your path, followed by sudden drops or unexpected inclines. There’s usually a story too: a landowner whose mansion is haunted by their murderous ghost, a spell gone wrong that has been raising the dead. Treehouse of Horror material.

In 2012, LEGO released 9467 Ghost Train as part of the Monster Fighters theme. I won’t talk about the original set in too much detail as otherwise this will become an essay, but essentially it has all the curving black sides, creepy bone lattices you could want, topped off by a smirking, spectral face on the front of the engine. As gloriously macabre as the set is, it was made for an action theme, and modifying it for a LEGO theme park would mean stripping the carriages down almost to their basic chassis and starting afresh (not that that would be a problem for an experienced builder). 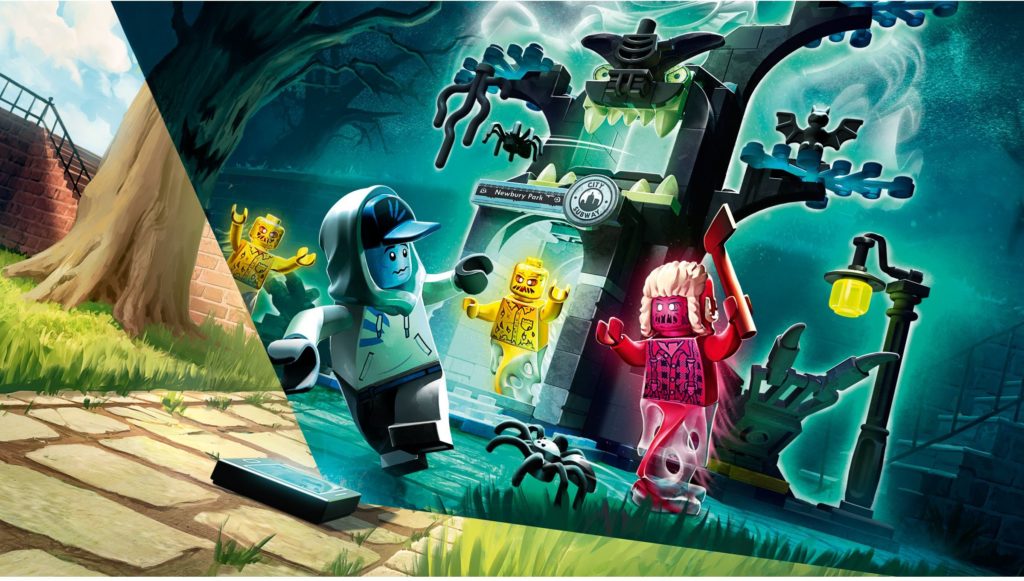 Of course, if you’re a fan of more modern ghost horror with a more utilitarian aesthetic, 70424 Ghost Train Express from the Hidden Side theme might work better for you. This blockier engine would require heavier modification, and the carriage would need to be rebuilt entirely, but it does give you a nice array of eery spring green elements with which to decorate your ride.

So what about the ride? All those jump scares and ghouls – how best to include those? Well, any Hidden Side set will give you ghosts and apparitions aplenty to put along the ride, though I would suggest 70427 Welcome to the Hidden Side, with its otherwordly blue plants, creepy tunnel and 3 ghost minifigures to be a very good place to start!

Altogether, there are so many ways to turn non-theme park LEGO sets into rides and attractions, and if you have a LEGO theme park of your own or are looking to start one, I hope this has provided you with a little bit of inspiration. Whether you have a go at modifying any of the sets I’ve mentioned, or have a cracking idea for turning a Harry Potter or Hero Factory set into a roller coaster, I hope you have a great time building fun experiences to put smiles on little, yellow plastic faces!