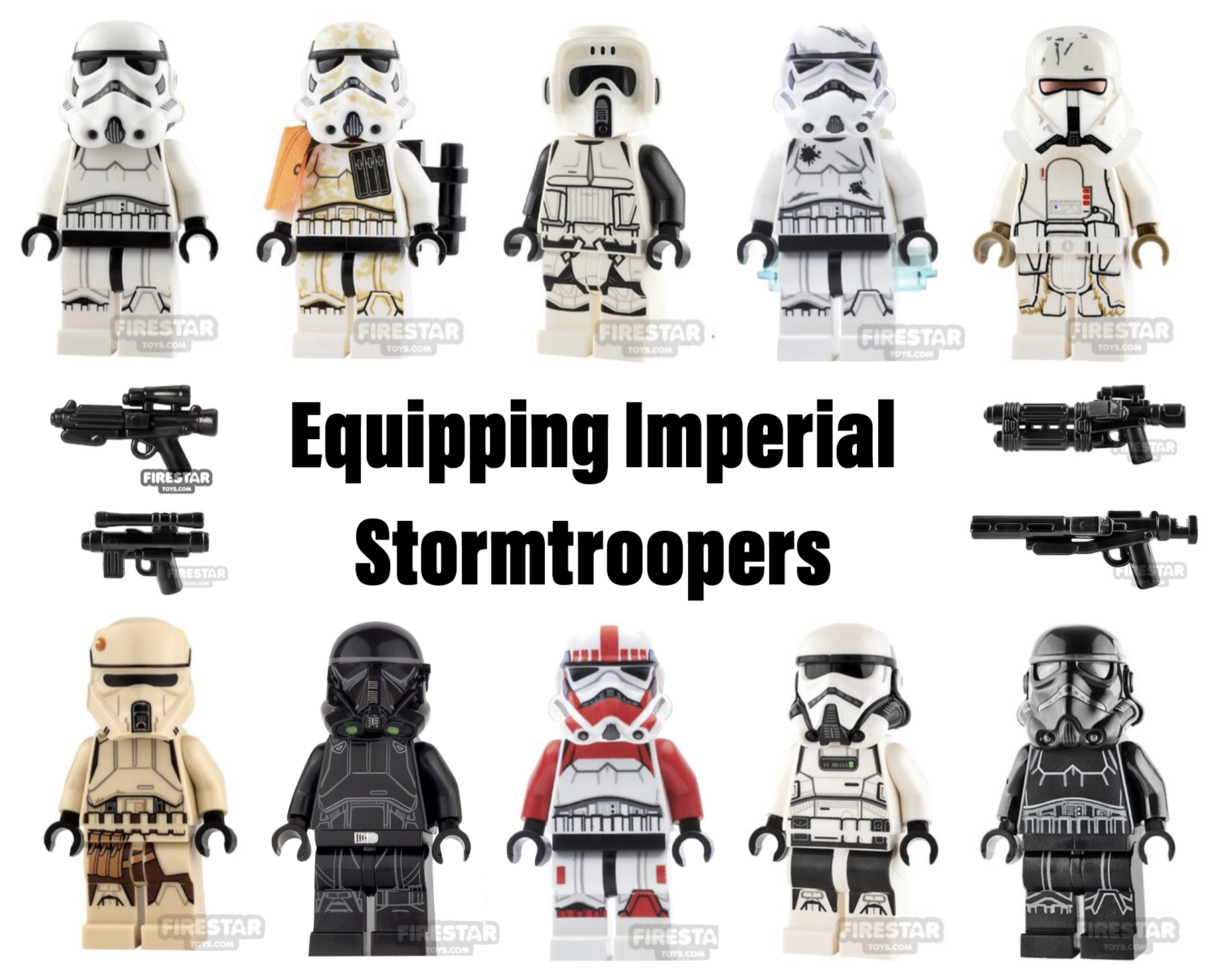 Stormtroopers are the face of an oppressive Empire. These so-called “Bucket Heads” were responsible for quashing any resistance to the Emperor’s tyrannical regime. Since they first appeared on screen in 1977, stormtrooper toys have flown off store shelves. LEGO has produced a wide variety of stormtroopers over years. The prospect of starting a LEGO Stormtrooper collection has become a daunting process due to the sheer number of minifigures, custom parts and weapons that are available.

This article aims to make the process a little easier. After hours of research, I have compiled the ultimate LEGO Stormtrooper guide. This article goes through all the different stormtrooper types, listing all the minifigures, parts and weapons you need to create a killer stormtrooper collection.

Warning: This article focuses exclusively on ground forces and speeder bike drivers. Imperial pilots, tank drivers and other imperial staff will be covered in a separate article. The article centres on Stormtroopers that served the Galactic Empire. This means First Order Stormtroopers won’t be covered here. With all that out of the way, let us start by examining the Stormtroopers that are featured in the original trilogy.

Editor’s note: The custom weapons mentioned in this article are mostly from Brickarms unless otherwise stated, which can be found here. However, there are other companies that produce custom weapons, which you can access by clicking here.

The Original Trilogy was released between 1977 and 1983. A New Hope introduced audiences to the classic Stormtrooper and the Sandtrooper. Three years later, the Empire Strikes Back introduced Star Wars fans to the Snowtrooper. Finally, Return of the Jedi brought the Scout Trooper to our screens. 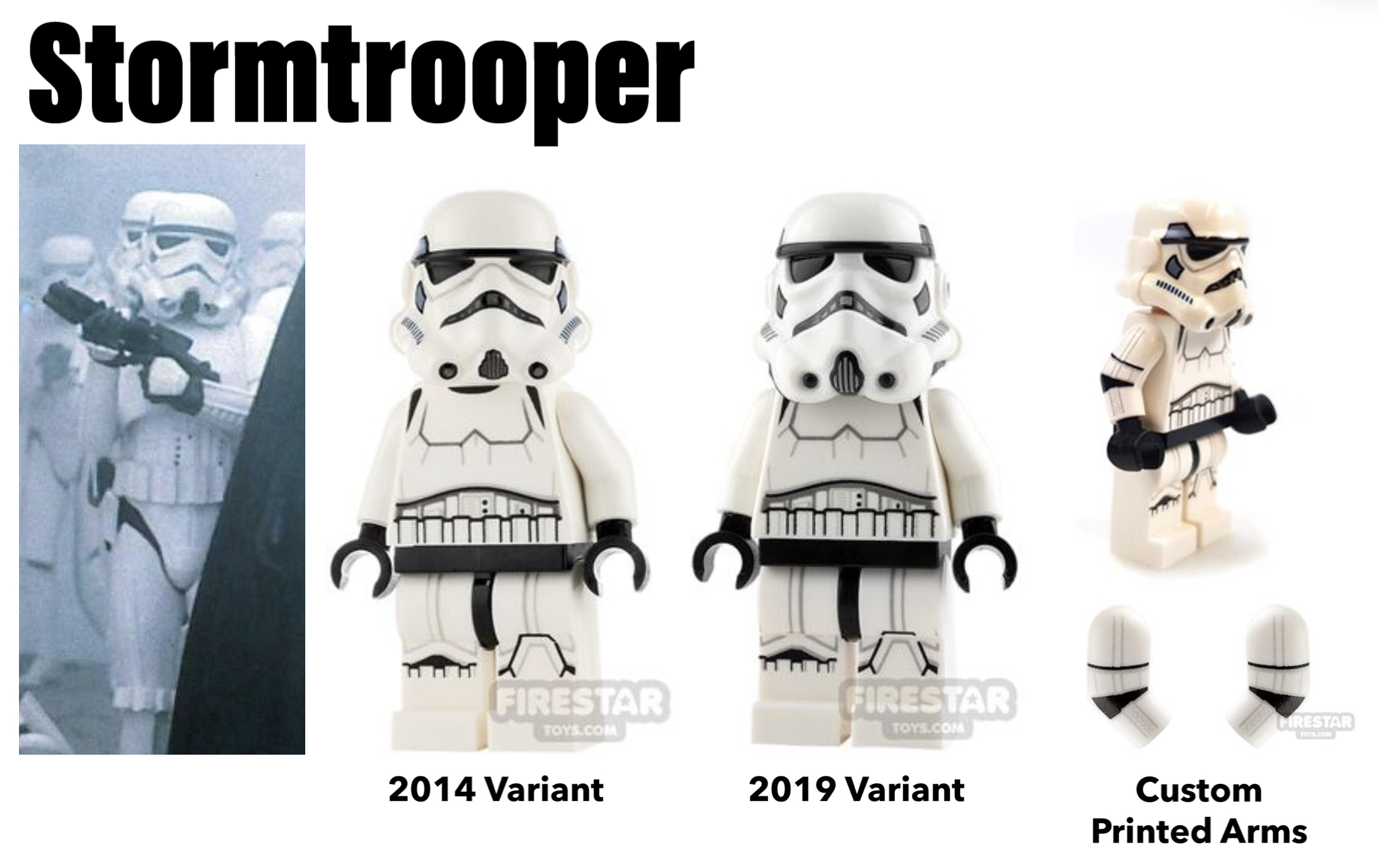 LEGO has produced numerous versions of the classic Stormtrooper. The 2014 variant introduced a new helmet piece that is loved by many Star Wars fans to this day. In 2019 LEGO updated the Stormtrooper by giving it a dual moulded helmet. This helmet piece received significant backlash as AFOL’s argued that the piece is oversized and stops you from turning the helmet. I don’t know which version I prefer. If you are a new collector, I suggest getting the newer version, as the older stormtroopers will only grow more expensive with time. Both versions of the Stormtrooper lack arm printing. Fortunately, FireStar Toys has you covered. They’ve produced awesome custom printed stormtrooper arms that are perfect for any imperial legion. 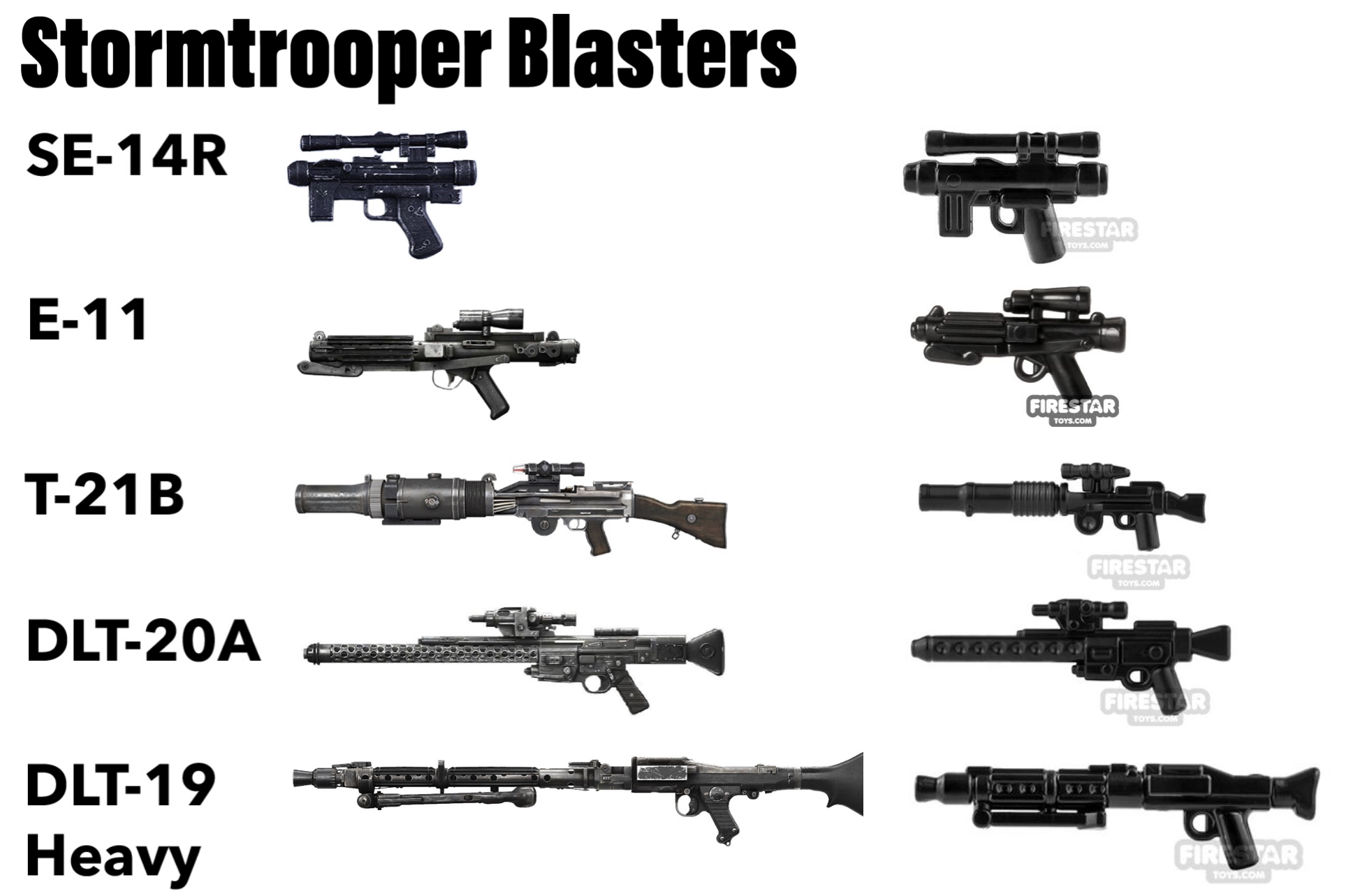 As well as carrying the iconic E-11 blaster, Stormtroopers were known to wield SE-14R, T-21, DLT-20A and DLT-19 blaster rifles. Brickarms has made highly detailed versions of all these blasters (the comparison image above only features Brickarms weapons). Other custom companies produce Star Wars blasters, but few of them produce the vast range that Brickarms manufactures. Still, it is worth checking out other custom weapon companies on the FireStar Toys weapons page as many of them produce their own versions of these weapons. All the companies on that page produce great products that are worth checking out. 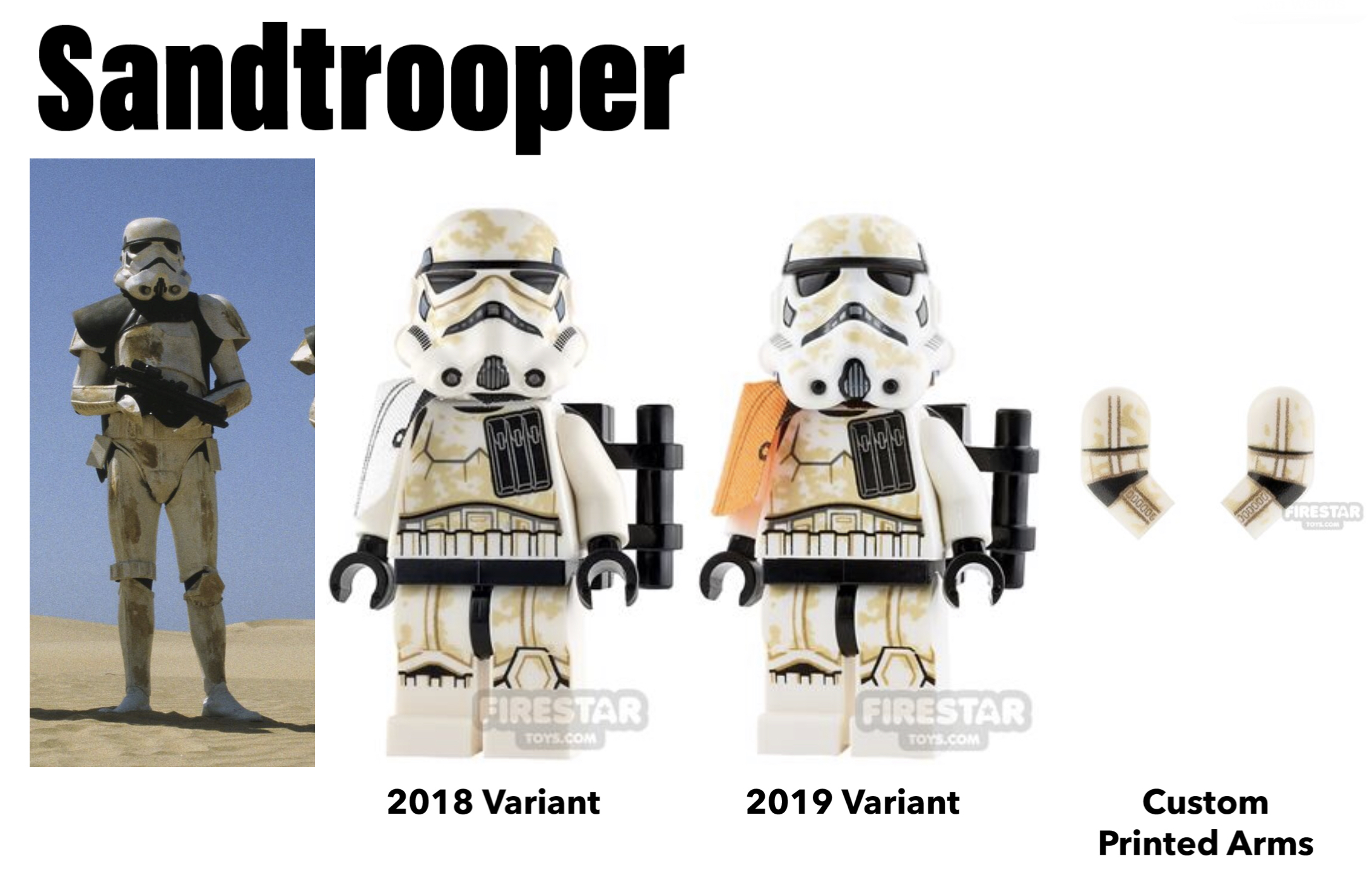 Sandtroopers were also introduced in A New Hope. LEGO has made a wide variety of sandtroopers over the years. In 2019, LEGO replaced the old Sandtrooper helmet with a dual moulded piece. Fortunately, FireStar Toys sells both the old and new versions of the LEGO Sandtrooper meaning you can collect whichever one you prefer. FireStar Toys recently released custom printed sandtrooper arms meaning fans can give their troopers a whole new level of detail.

Sandtroopers were known for carrying three types of weapon; the E-11, T21 and DLT-19 heavy blaster. 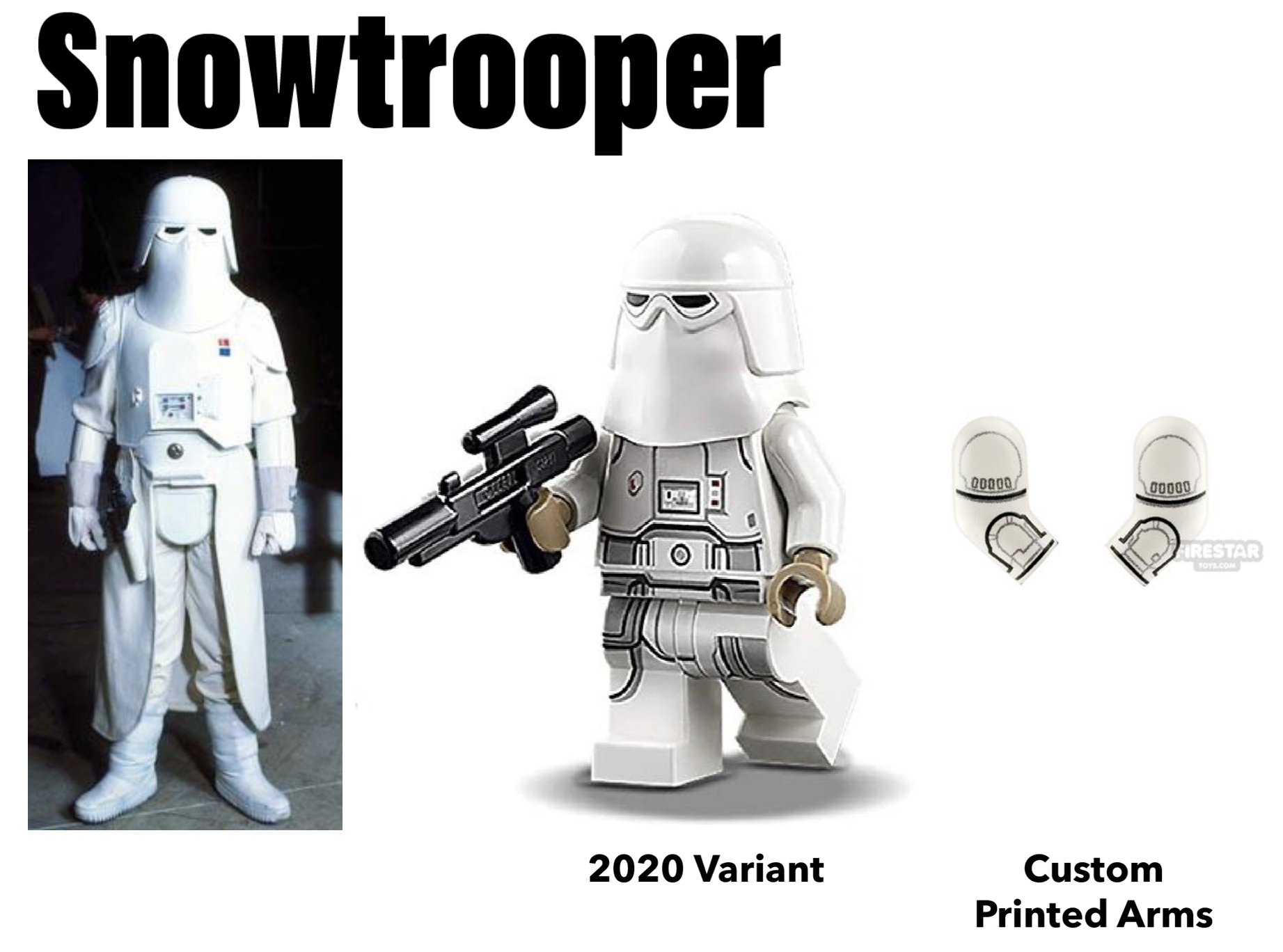 Cold Weather Assault Stormtrooper, or Snowtroopers as they were more commonly known, were a division of Stormtroopers trained for icy environments. The latest version of the LEGO snowtrooper was released in 2020 with the new AT-AT. Once again, FireStar Toys has produced a beautiful pair of custom printed arms, perfect for upgrading any snowtrooper collection. 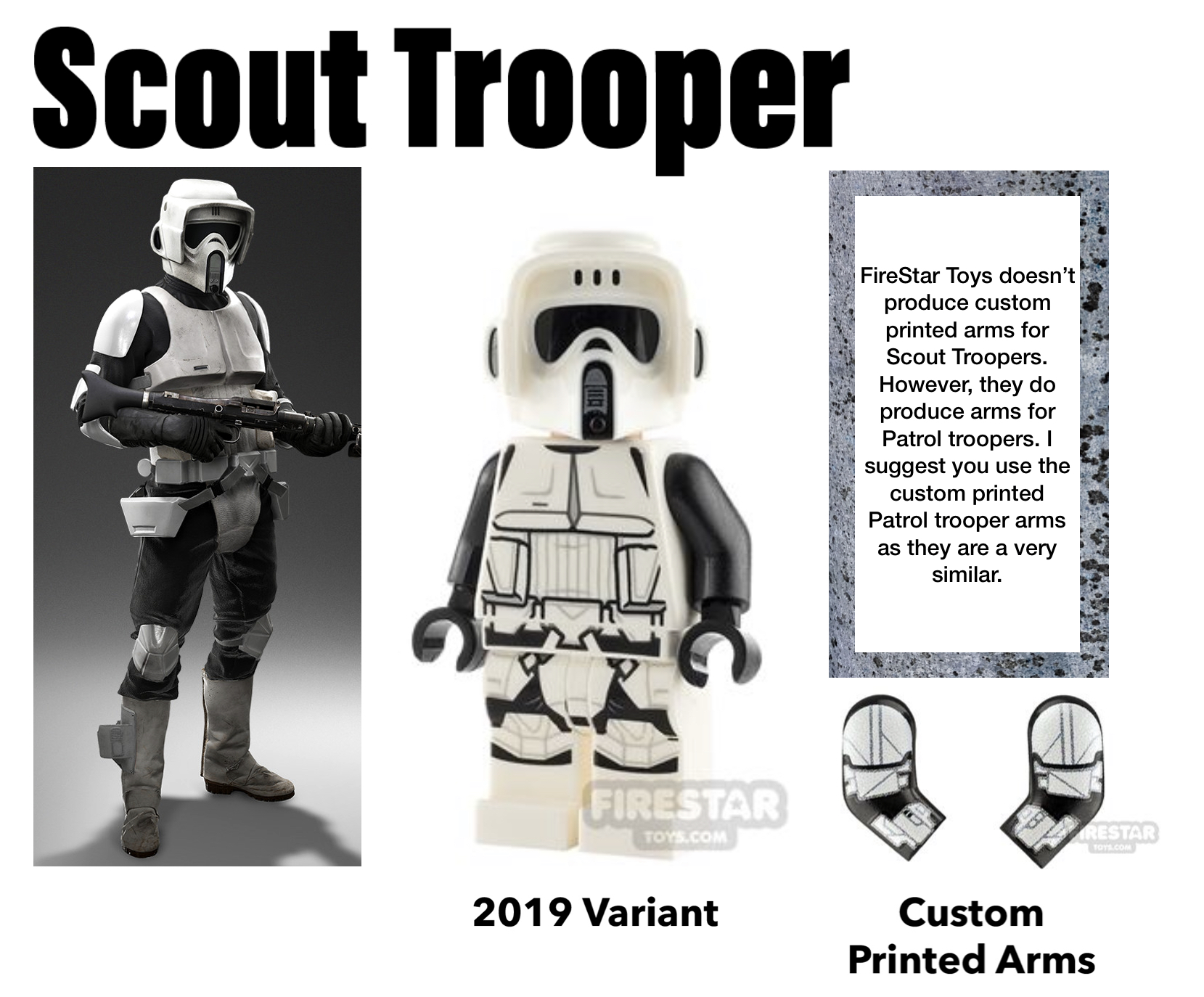 Return of the Jedi introduced audiences to the Scout Trooper. The latest version of the LEGO Scout trooper was introduced in 2019’s Action Battle on Endor set. This minifigure is particularly popular as the new dual moulded helmet adds a whole new level of realism to the figure. I recommend combining this minifigure with a pair of Patrol Trooper arms to complete the look. 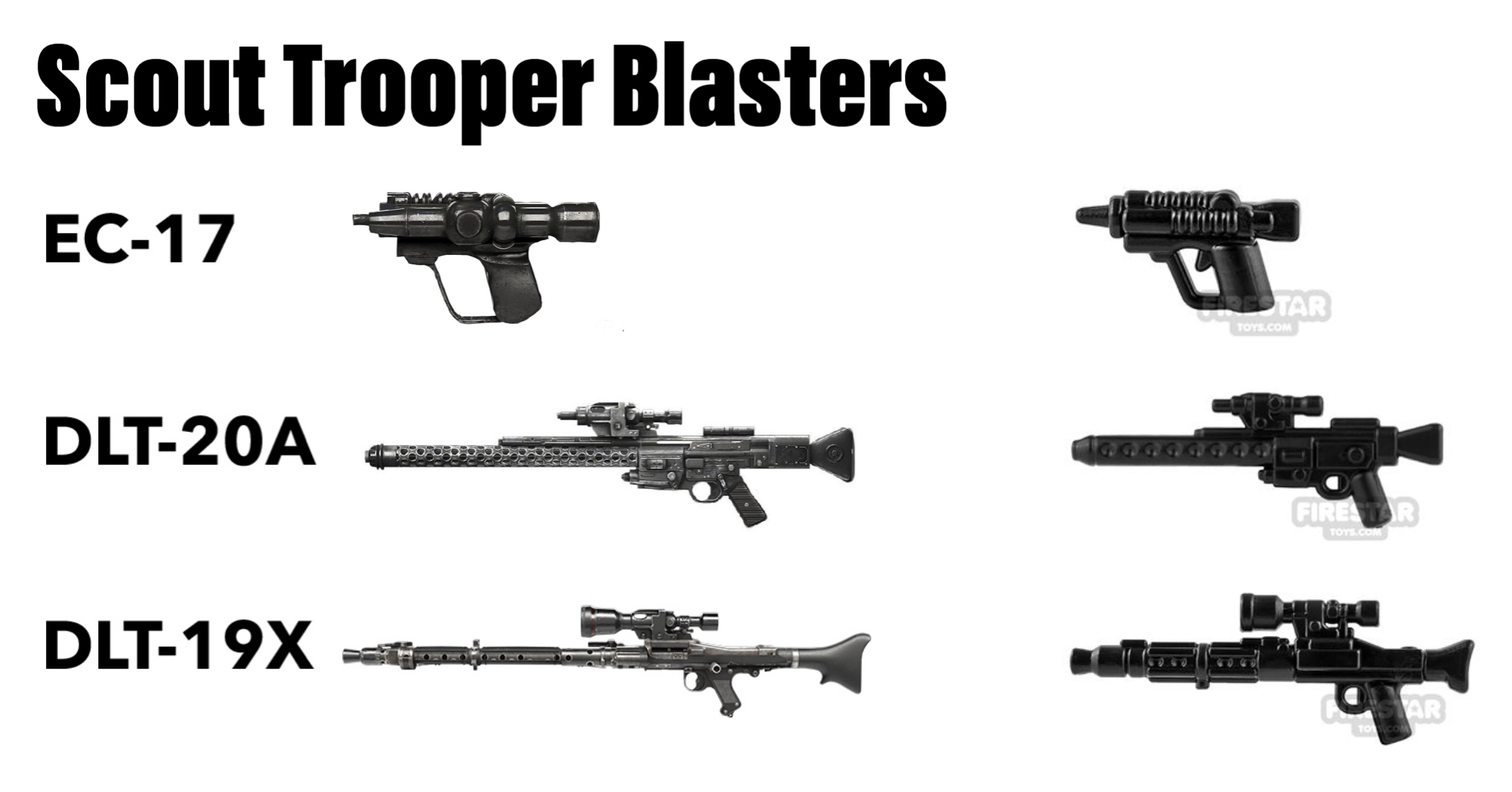 Scout troopers use a wide variety of blasters. DLT-20A and DLT-19X rifles were used for long-range combat whilst EC-17 and EE-4 pistols were used for close-range skirmishes. Brickarms produces three of the four weapons. Unfortunately, none of the major custom companies produce EE-4 blaster pieces (please correct me in the comments if I’m wrong).

The first series of Star Wars Rebels aired in late 2014. The series was the first major piece Star Wars content set in the Original Trilogy era since Disney acquired Lucasfilm. The series introduced fans to the Imperial Combat Driver. 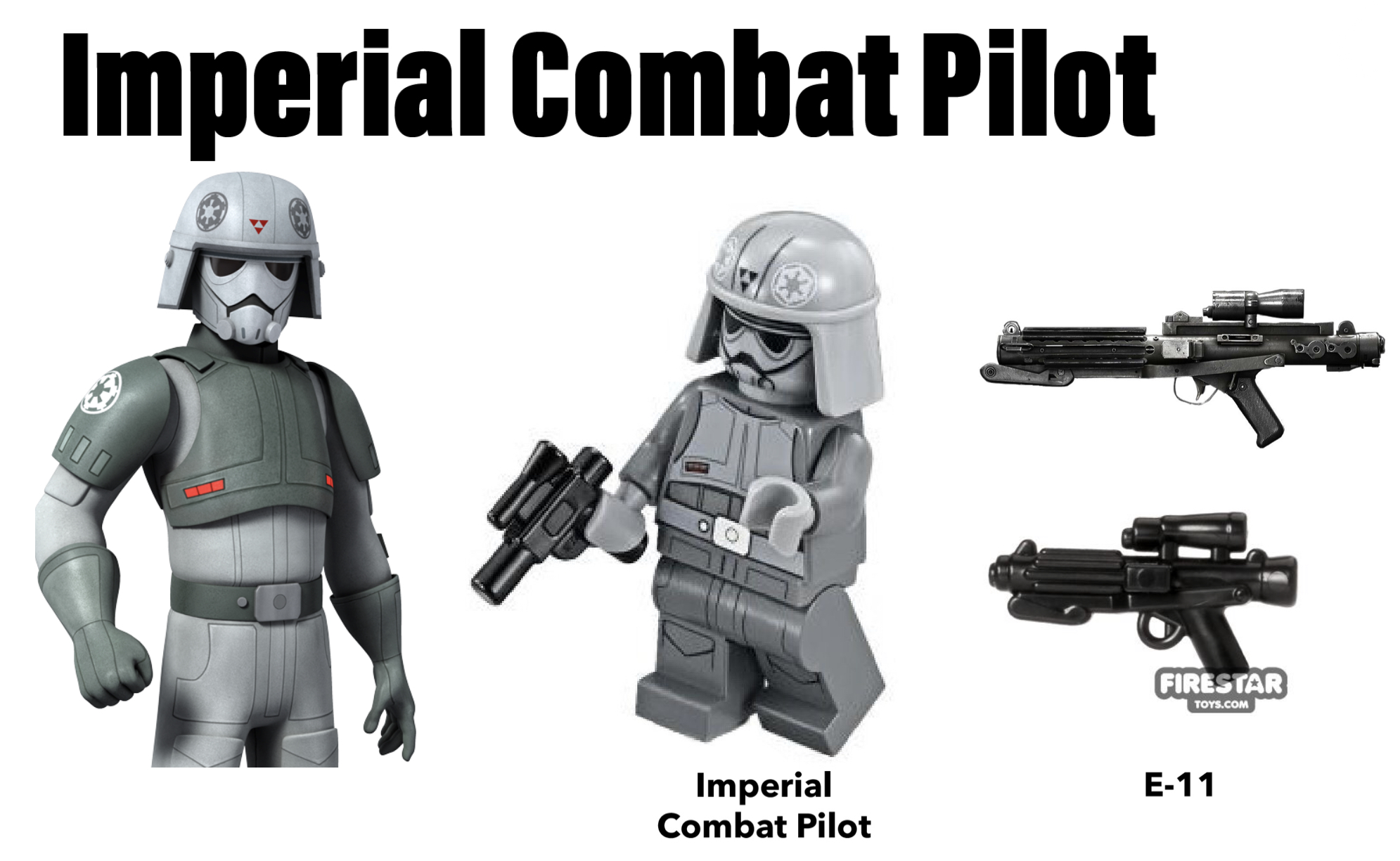 After six years without an instalment in the Battlefront franchise, EA released a new Battlefront game in 2015. The game introduced Jumptroopers, Shadow troopers and Shock troopers into Star Wars cannon. 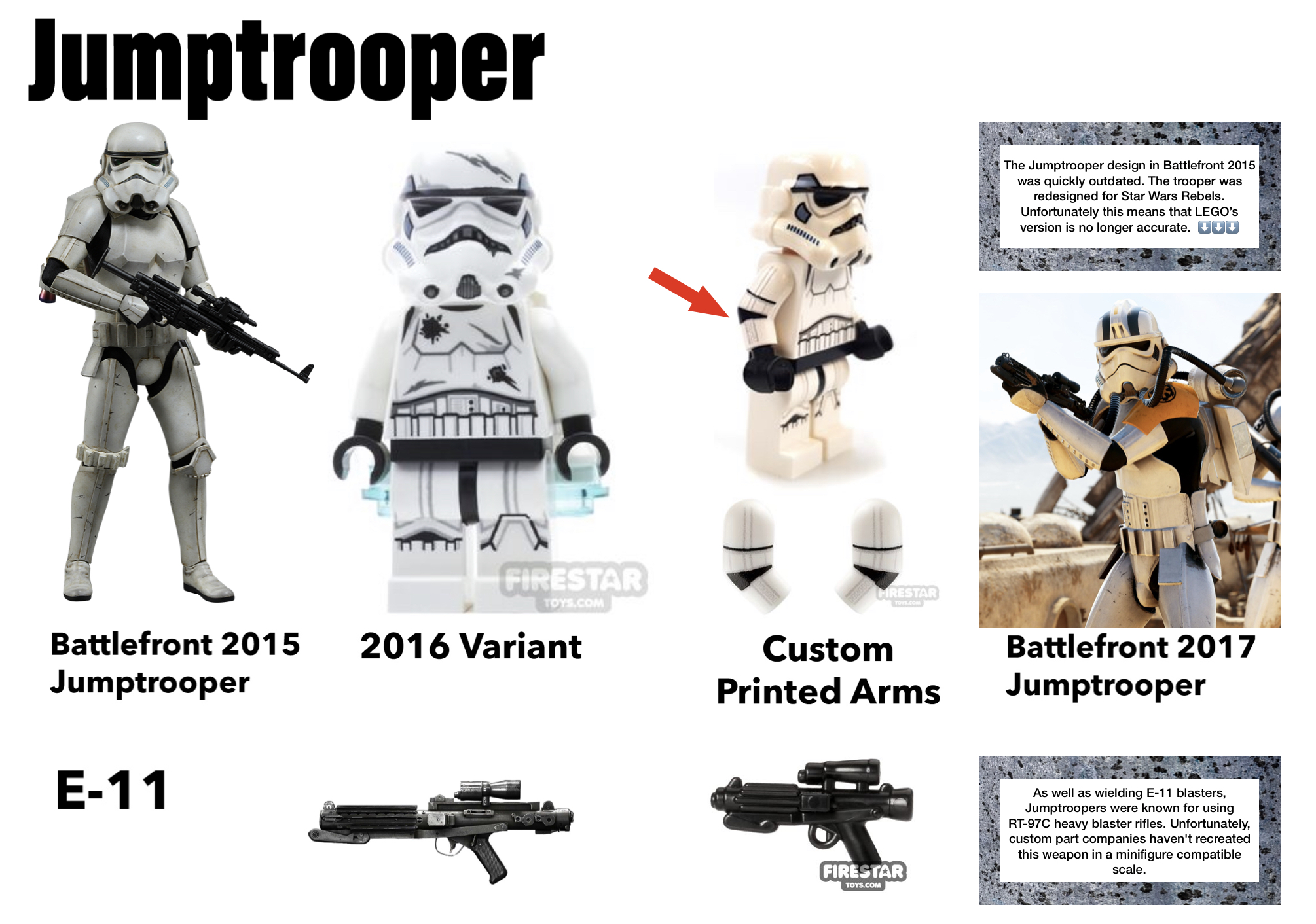 LEGO first created the Jumptrooper in the 2016 Galactic Empire Battle Pack. Unfortunately, Lucasfilm revised the Jumptrooper design for Star Wars Rebels, meaning that LEGO’s minifigure is no longer accurate. If you like the outdated Jumptrooper minifigure, you could upgrade it with a pair of FireStar Toys custom printed stormtrooper arms. You could also equip the character with an E-11 blaster piece. 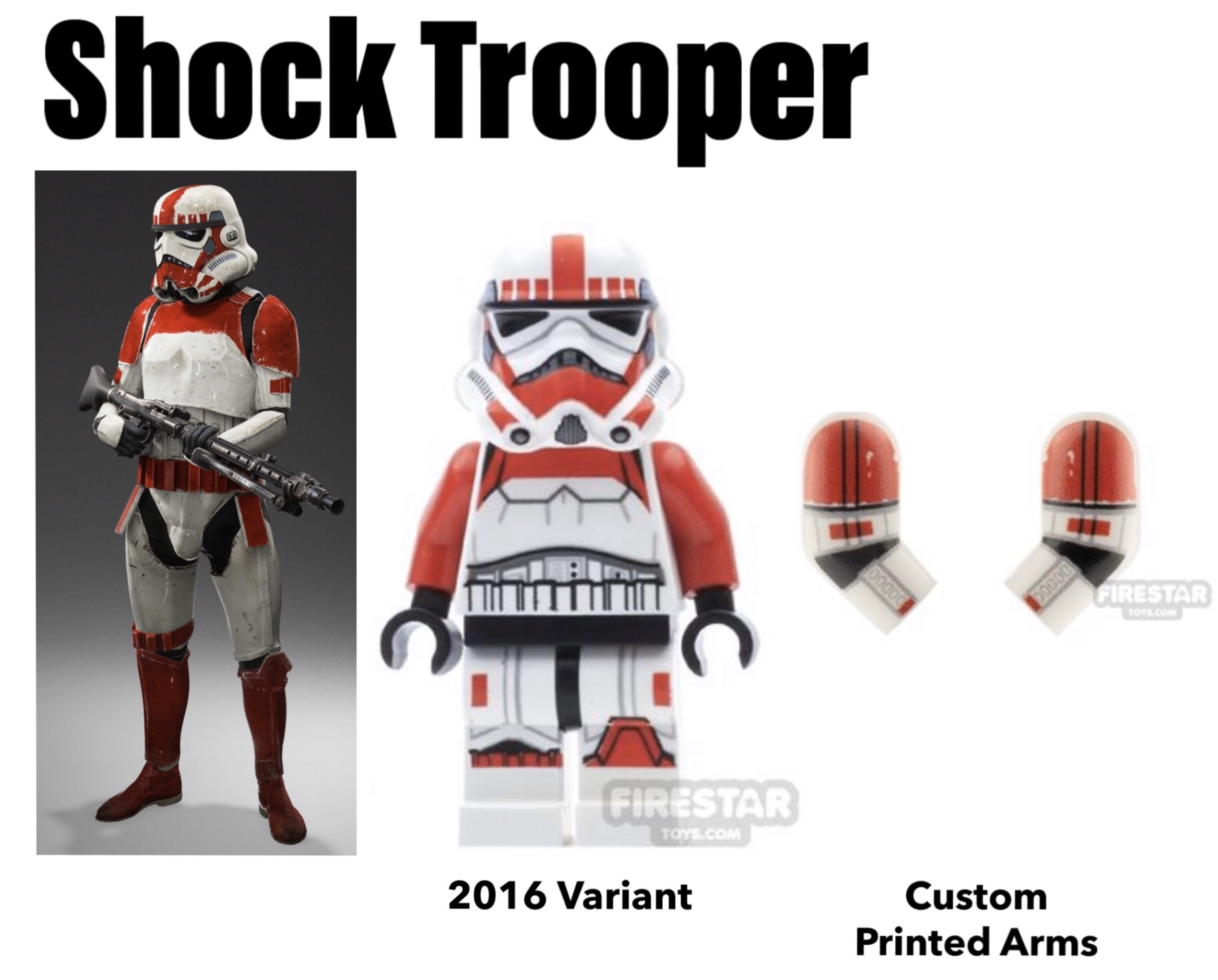 The Shock Trooper was also included in the 2016 Galactic Empire Battle Pack. I recommend upgrading this minifigure with a pair of FireStar Toys custom printed arms. This trooper looks so menacing. The minifigure reminds me of playing Survival mode on Battlefront. I died a lot to Shock troopers. They were a nightmare to fight!

Shock troopers were famous for using DLT-19 Heavy Blaster rifles. They also used DLT-20A blasters for long-range combat. Both of these weapons are produced by Brickarms so it’s easy to equip your minifigure with screen accurate weapons. 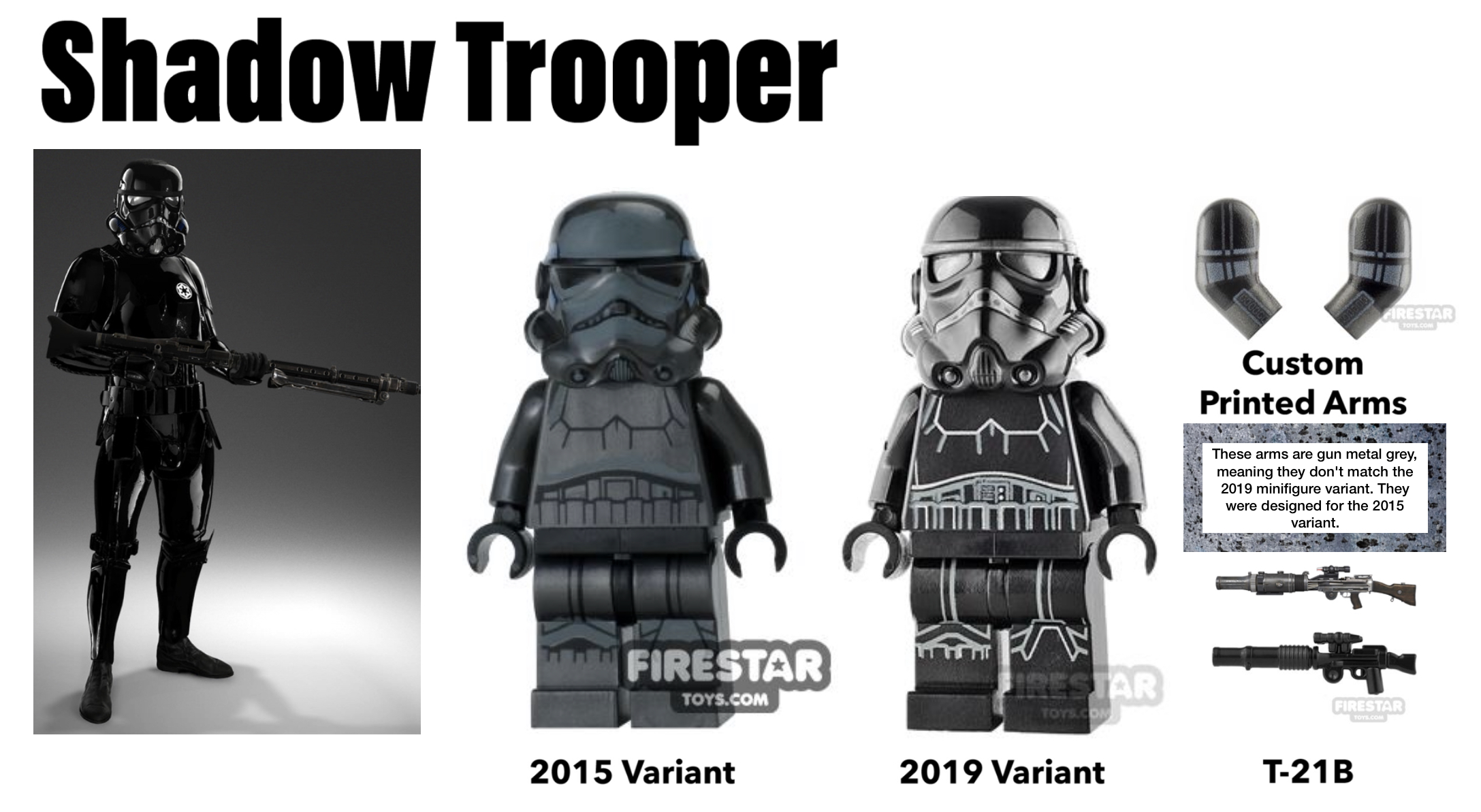 Shadow Troopers were deadly. These troopers could blend into their environment, making them nearly impossible to spot. LEGO produced a gunmetal grey version of the shadow trooper in 2015. They released a black version of the minifigure in the 2019 Imperial Dropship Battle Pack. If you have the 2015 version, I recommend upgrading it with FireStar Toys custom printed Shadow Trooper arms. If you have the 2019 version, I recommend upgrading your minifigure with a pair of FireStar Toys custom printed Death trooper arms. Then complete the minifigure by equipping it with an awesome T-21B blaster.

Rogue One was the first live-action Star Wars spin-off film. The movie centred on the team of rebel spies that stole the Death Star plans. The feature introduced fans to the Death trooper and the Shore trooper. 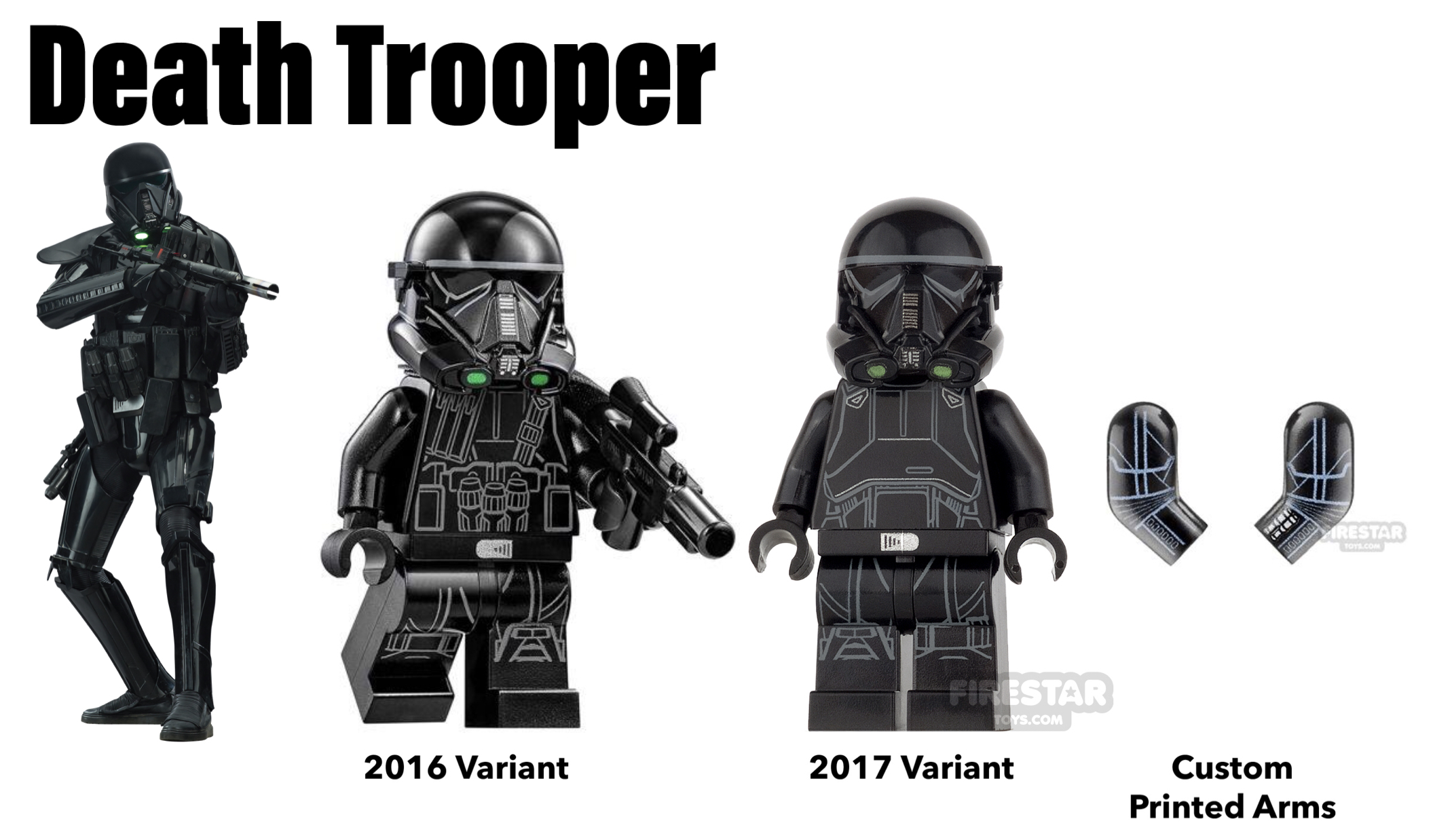 Death Troopers were an elite branch of stormtroopers. They were often tasked with protecting significant imperial officers or deployed to guard classified imperial projects. LEGO produced two different types of Death Trooper. The 2016 variant had more detailed torso printing and a fabric pauldron piece. The 2017 variant was slightly less detailed but it came in a much cheaper set. Both these minifigures would benefit from a pair of FireStar Toys’ custom printed Death Trooper arm pieces. 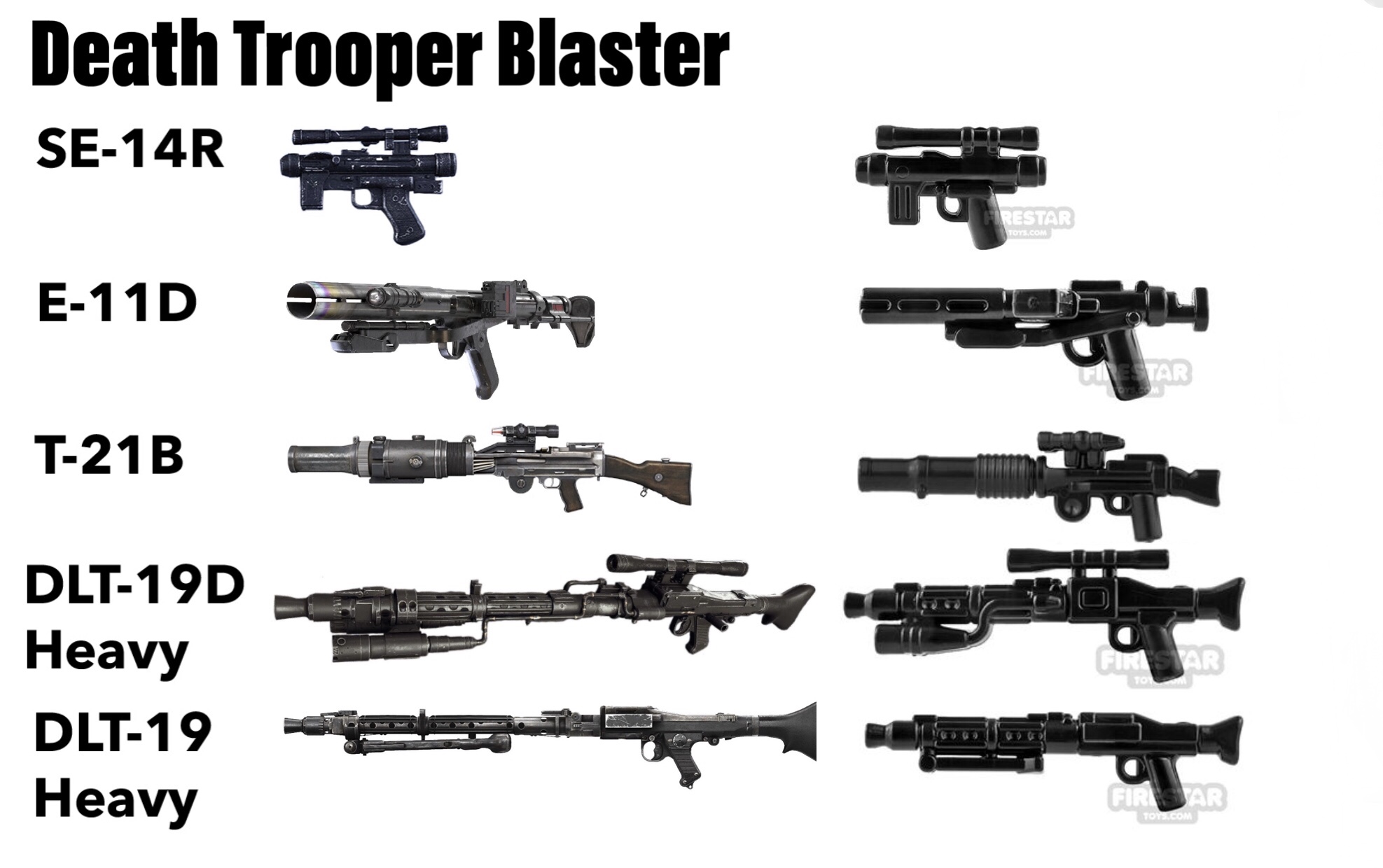 As well as carrying the legendary E-11D, Death troopers were known to wield SE-14 pistols, DLT-19 and DLT-19D heavy blaster rifles. Brickarms produces custom parts for all of these weapons, making it easy for fans to equip Death troopers with movie-accurate weapons. 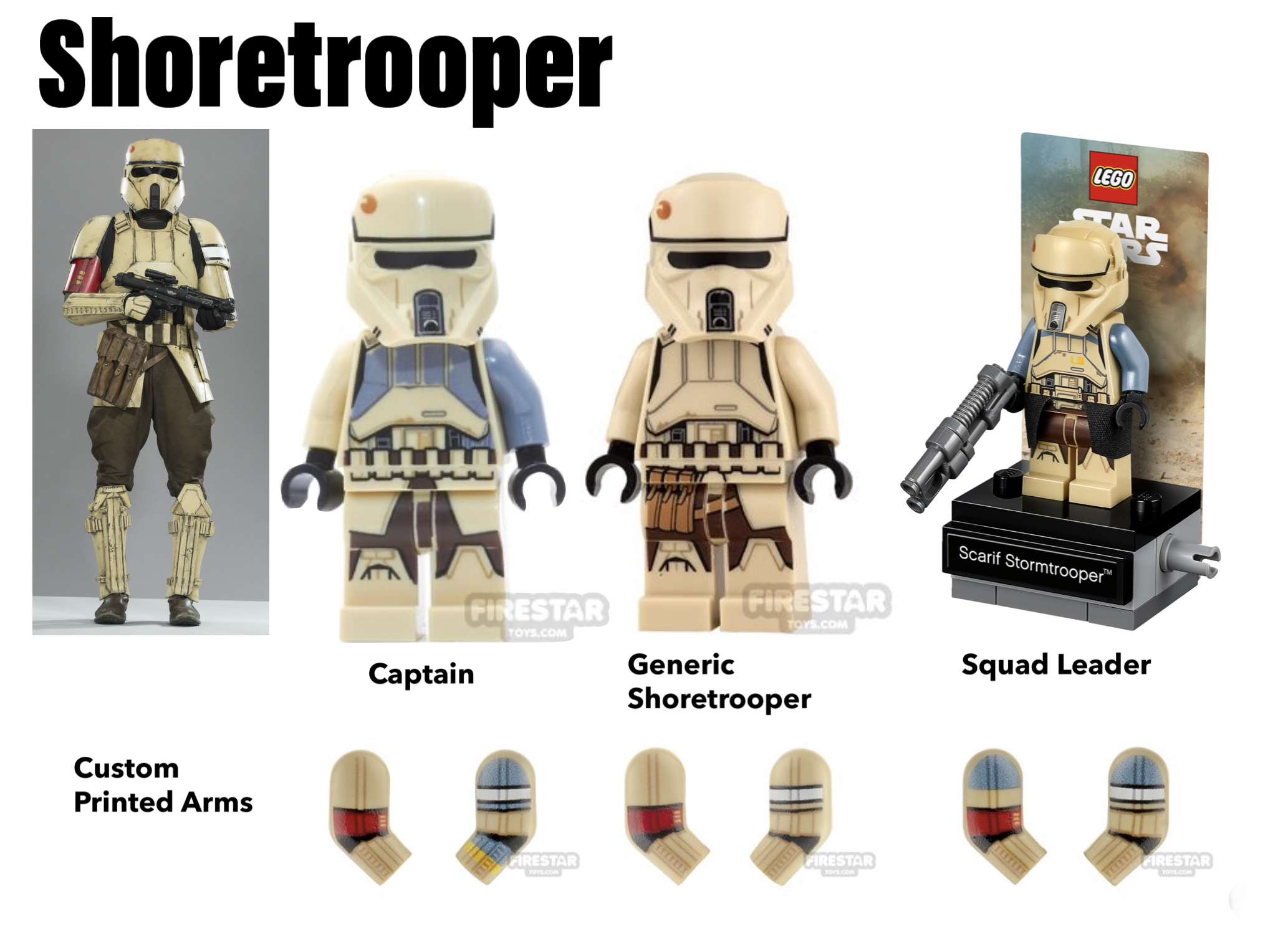 Shoretroopers can be seen using both E-11 and E-22 blasters.

Battlefront 2 was released in late 2017. The first game was heavily criticised for a lack of single-player experience. Developers attempted to address this in the second game by adding a single-player campaign that focused on an elite band of Stormtroopers known as Inferno Squad. 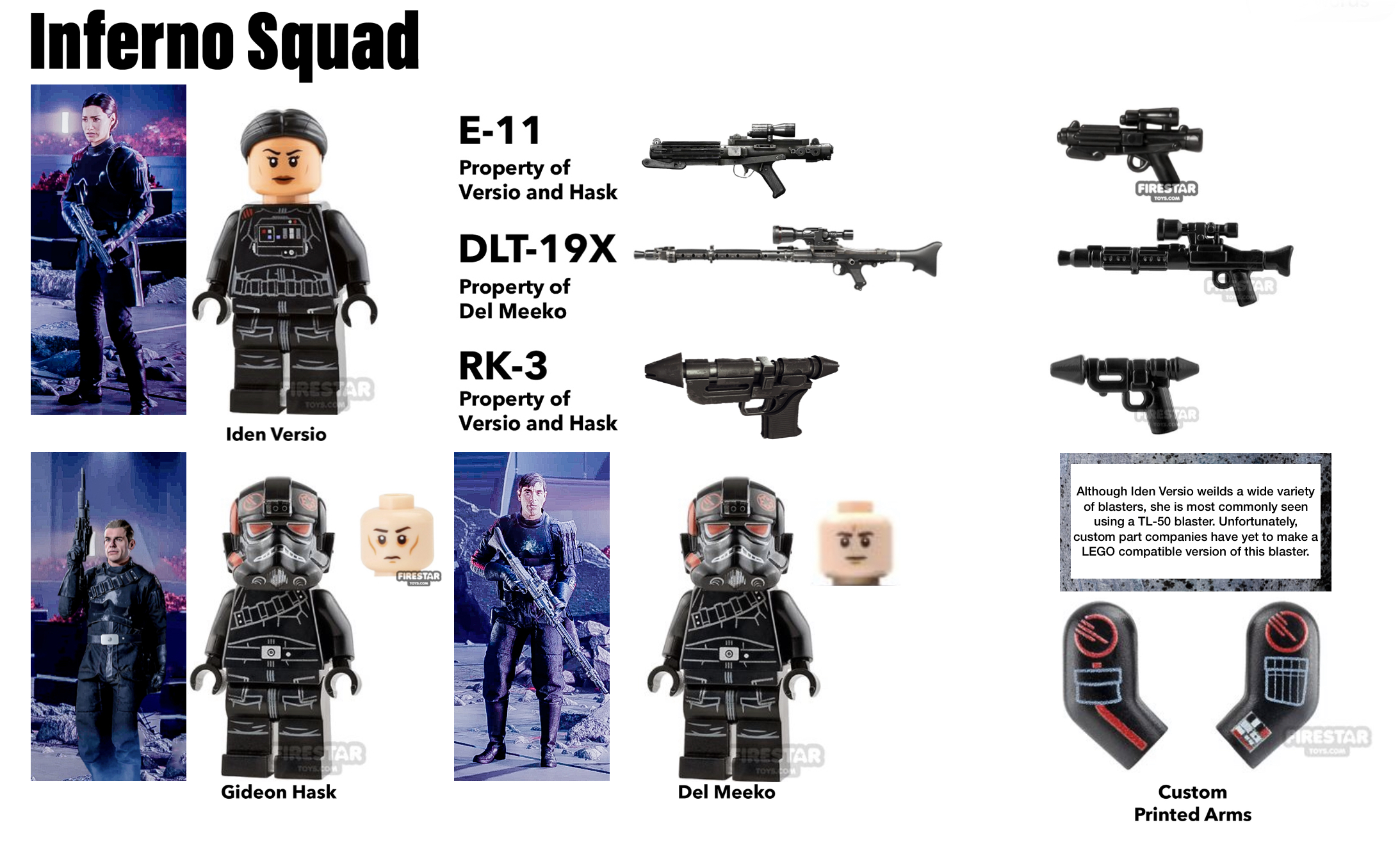 Solo: A Star Wars Story released in May 2018. Although the movie was considered a commercial flop, it has become a fan favourite in many circles. The spin off film introduced Star Wars fans to the Patrol trooper, Mud trooper, Mimban Stormtrooper and the Range trooper. 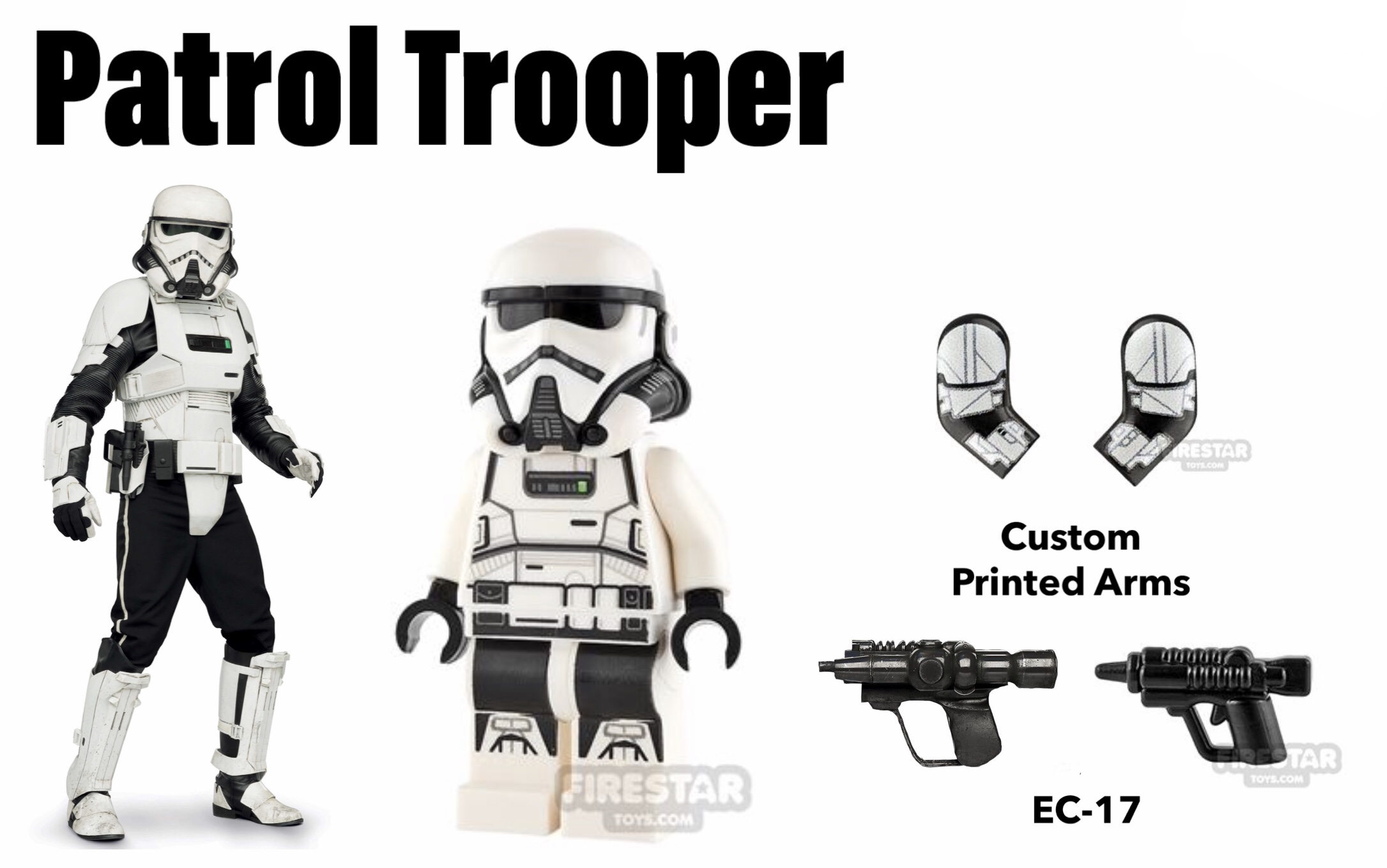 LEGO first created a Patrol Trooper in the Imperial Patrol Battle Pack. Upgrading a Patrol trooper minifigure is simple. Firstly, add FireStar Toys’ custom printed arm pieces to give the minifigure a whole new level of detail. Then equip the minifig with an EC-17 blaster pistol. 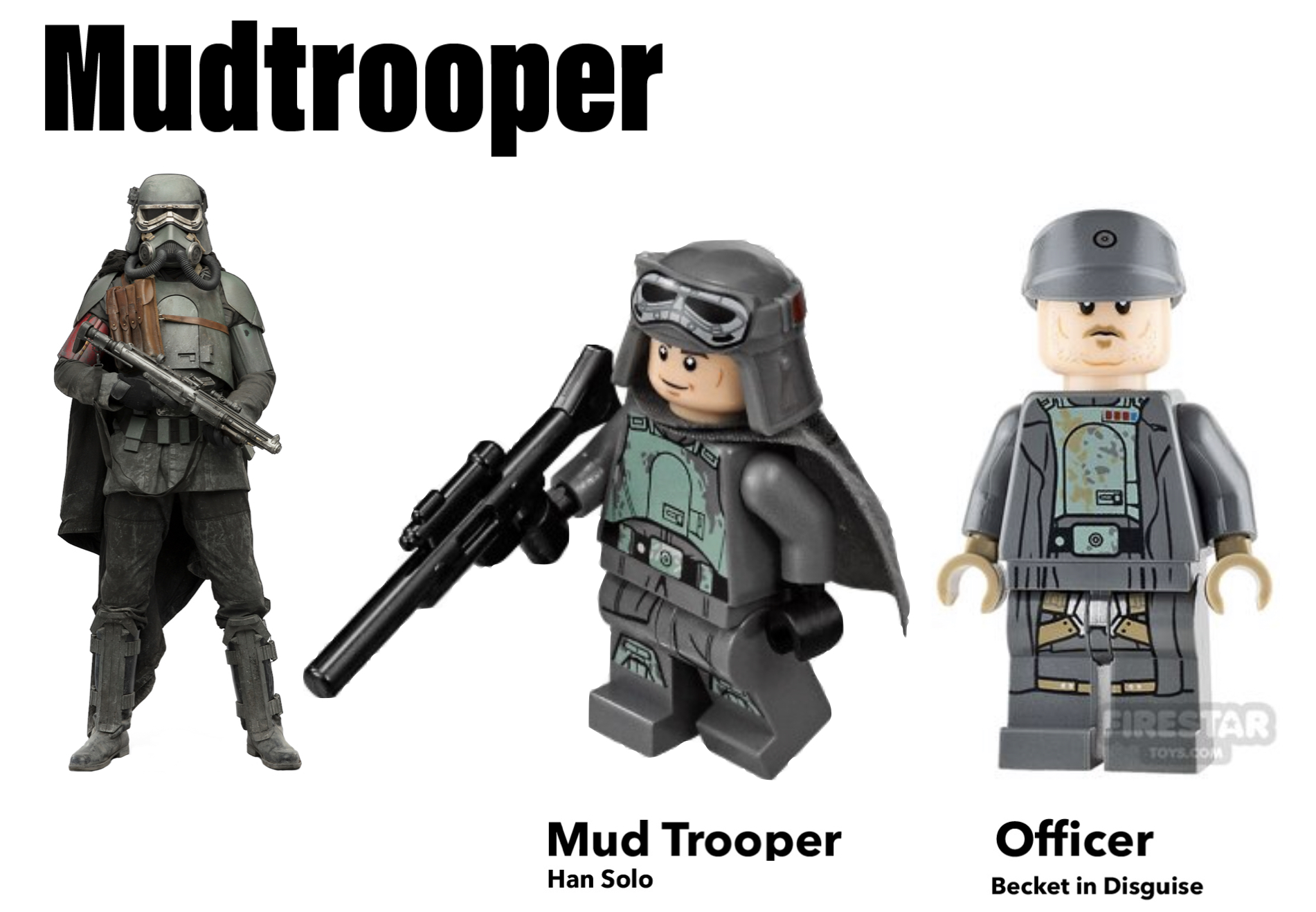 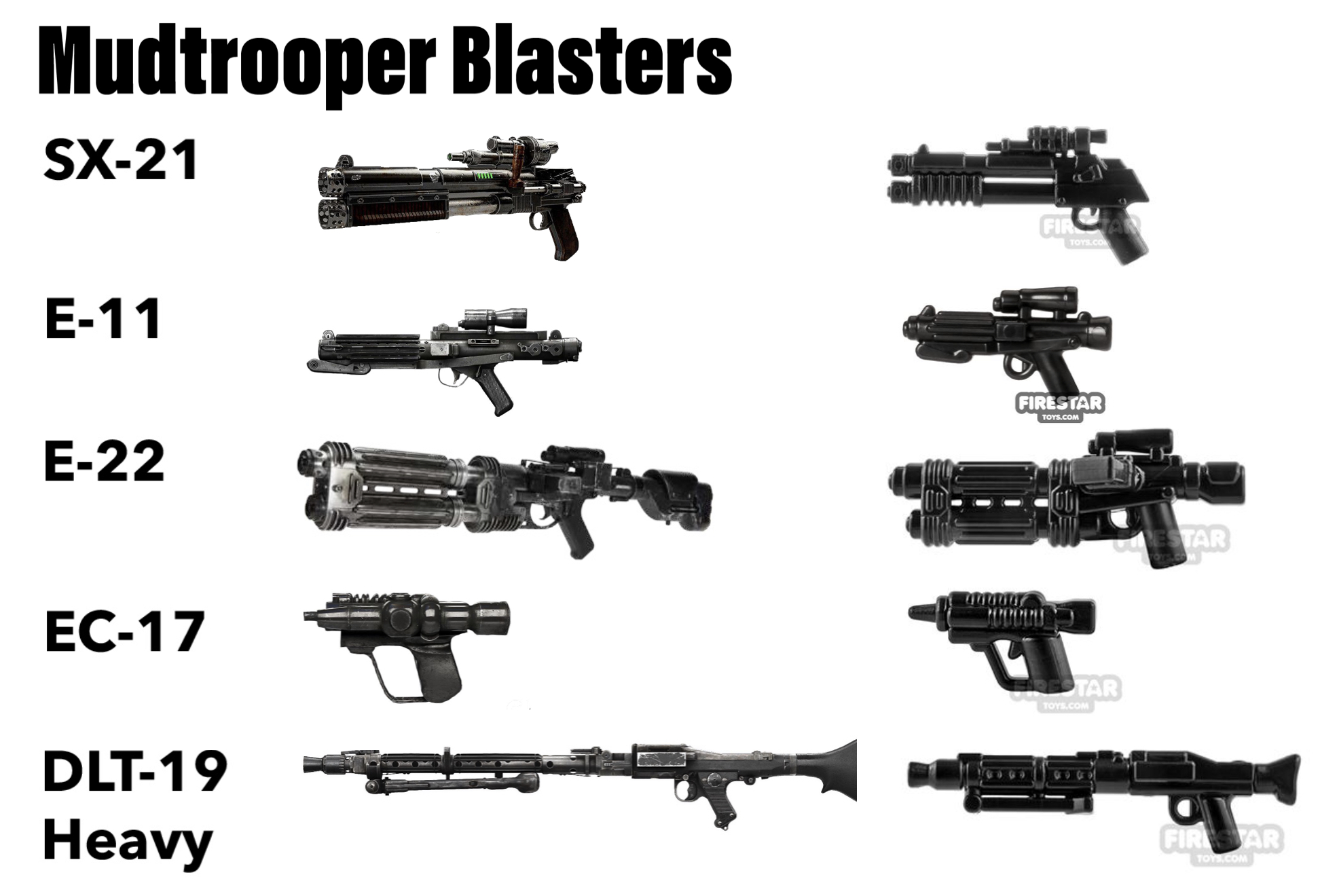 As well as carrying the SX-21 blaster, Mud troopers were known to carry E-11, E-22, EC-17, and DLT-19 heavy blaster rifles. Brickarms produces most of these weapons but BigKidBrix is the only custom parts company to have recreated the SX-21 blaster (correct me if I’m wrong in the comments section).

The Mimban Stormtrooper was formally known as a wet weather stormtrooper. LEGO included the minifigure in set 75211, Imperial Tie Fighter. I recommend upgrading your minifigure with a pair of FireStar Toys custom printed arms and an E-11 blaster piece. Hopefully, we will see this minifigure in a battle pack at some point. The fan campaign worked for the 501st battle pack so who’s to say it couldn’t happen again. 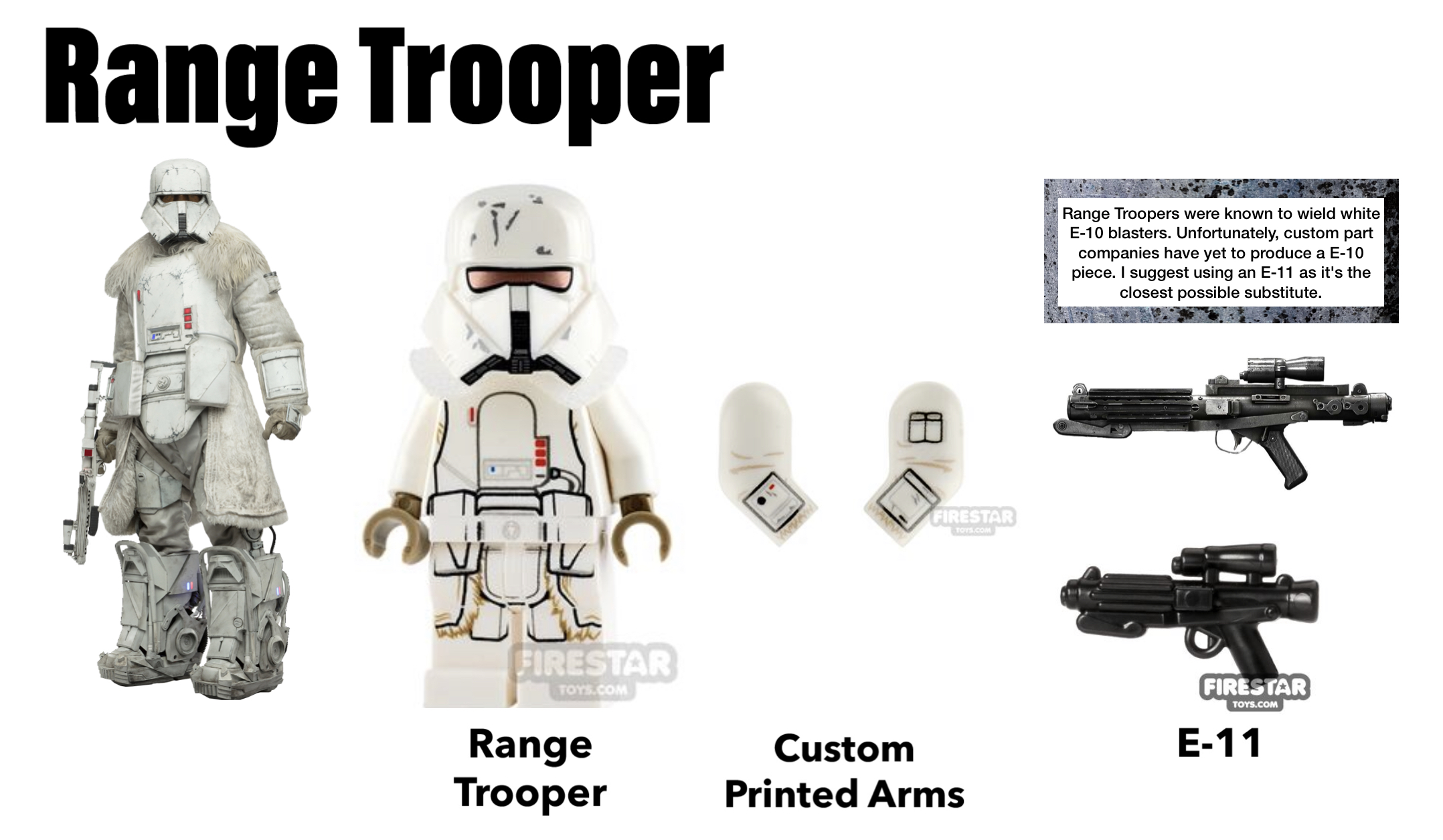 The Mandalorian was the first ever live action Star Wars TV show. The programme featured Moff Gideon’s Imperial remnant after the fall of the Empire. The series featured the first live action Incinerator Trooper. 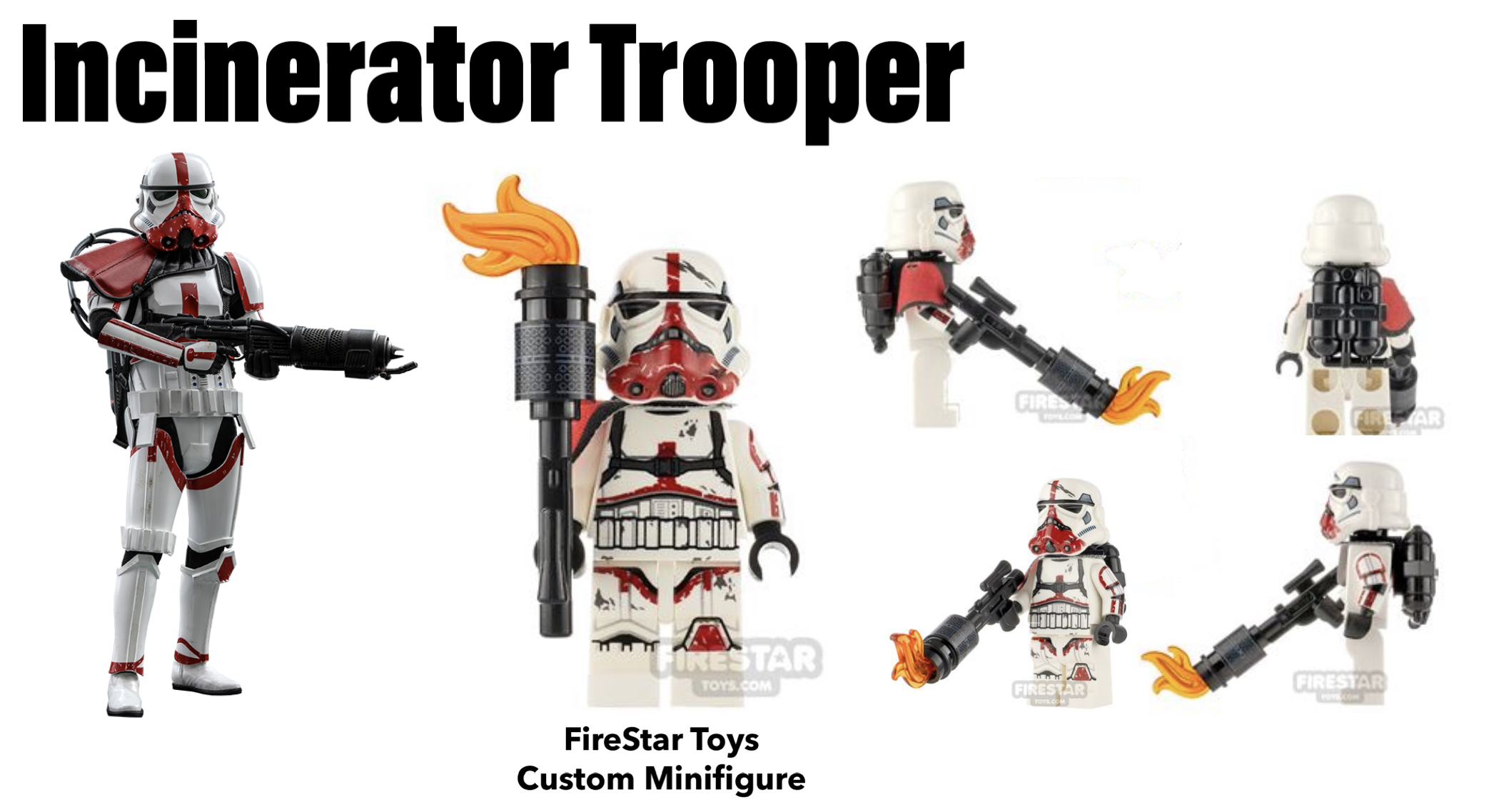 LEGO has yet to make an Incinerator Trooper minifigure. FireStar Toys has filled the void by producing an incredible custom printed Incinerator Trooper. Unfortunately, the minifigure was only produced in a limited run so it won’t be easy to get hold of if you don’t already have one. Still, keep your eye on the sight as you never know what products could return.

Thank you for reading. If you enjoyed this article keep your eye on FireStar Toys for more LEGO Star Wars articles. Vivid Username just produced a wonderful buyer’s guide to the LEGO Star Wars summer sets; I wholeheartedly recommend you check it out.

Will you be upgrading your LEGO Stormtrooper army? Do you have a stormtrooper minifigure? Let us know in the comments section.

The images in this article were taken from Wookieepedia, Battlefront Fandom and Brickset unless stated otherwise