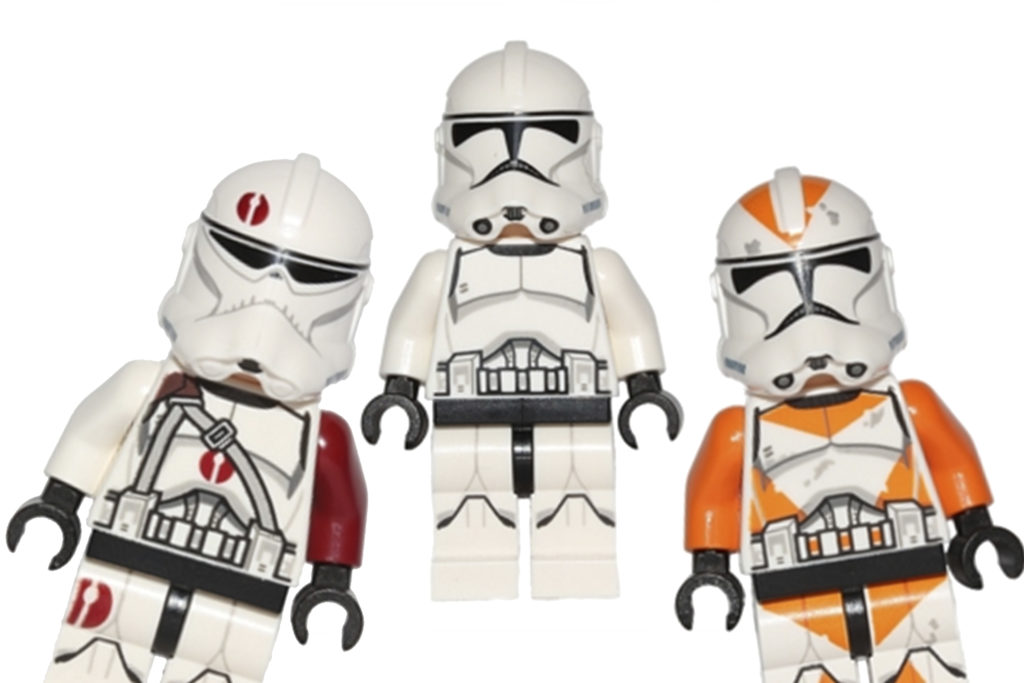 It’s safe to say that as a Star Wars fan, LEGO’s recent announcement on their 501st Legion pack was something which got me incredibly excited. The 501st legion are some of the most popular Clone Troopers within the franchise, and are incredibly prominent within my favourite sub-product from Star Wars, The Clone Wars television show. Now our brand-new team member, Josh Wright, has already written a fantastic write-up on this pack. I’ve decided to go back to basics – and in today’s blog post, we will look through some of the other LEGO sets which have included LEGO Phase II Clone Troopers, so you can get an idea of some of the other unique troopers which are out there to compliment your new 501st Legion. So, let’s get straight into it! 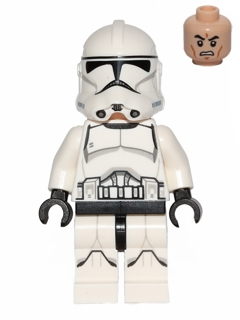 Released in 2014, 75028 Clone Turbo Tank is one of the few ways that LEGO fans can get their hands on the modern LEGO Phase II Clone Trooper in his default white armour, without any specialist markings or details. When this set released it retailed for around £10 here in the United Kingdom, and was in high-demand due to the easily-amassable nature of the Clone Trooper included. Interestingly, beyond the Advent Calendar set which came out at the end of that year, this Clone Trooper has not seen any additional releases – with LEGO instead focussing on giving us unique colours for the Clone Troopers whom have been released. Whilst I appreciate the breadth and depth of unique Clone Troopers that we now have in our collections, I would appreciate getting my hands on the original Phase II trooper in larger quantities soon. 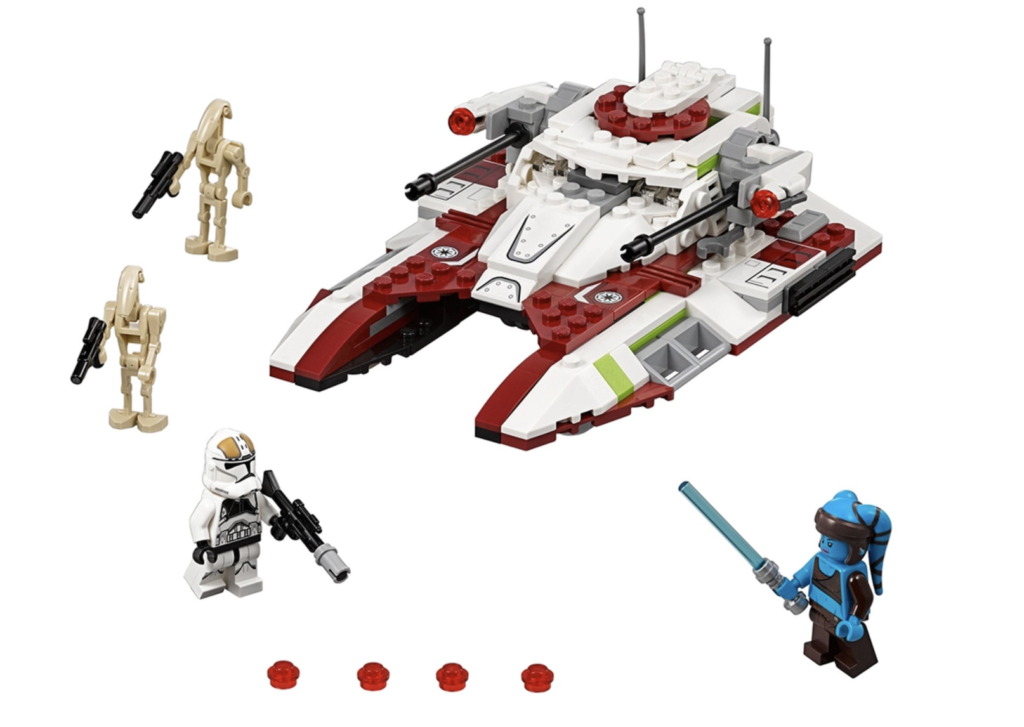 Modelled on a design for the Republic Fighter Tank which was made popular in the original series of Battlefront games, this rendition of the tank incorporated a unique version of a LEGO Phase II Clone Trooper – the Clone Trooper Gunner. The gunner is an interesting minifigure. Whilst he utilises the same helmet mould as the standard Phase II Clone Trooper, he includes additional printing on the helmet to represent the additional extremities that the helmet features within the Star Wars universe.

I also appreciate the additional detailing for the torso print here – representing the character with the additional shoulder-style armour piece which he does utilise in-universe. This is an incredible unique – and arguably un-recognisable – variation of a clone trooper which appears in Revenge of the Sith, and is a figure which I thought we’d never see LEGO attempt to create, so it is awesome that this set brought it into the line. 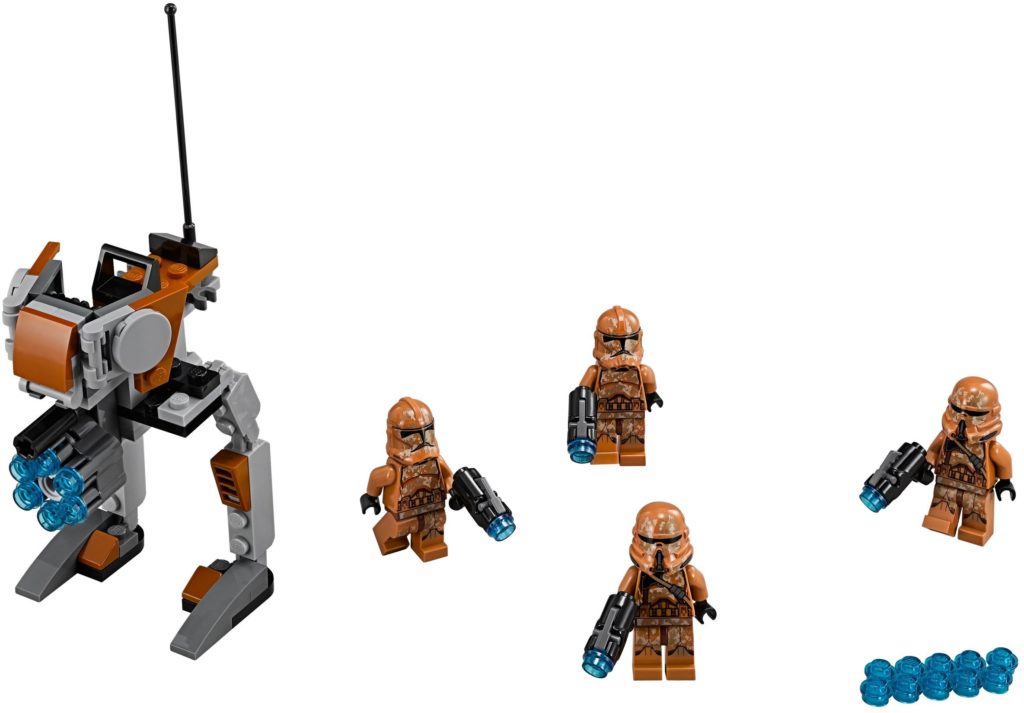 2015 was a fantastic year for fans of Clone Troopers – bringing an incredible battle pack which has continued to have massive appeal for fans years after its initial releases. This set was clearly inspired by the Clone Wars episode ‘Landing at Point Rain’ and the subsequent episodes afterwards, which see Republic soldiers on the ground on the planet utilising specialised ARF trooper gear with camouflage patterns. Whilst we have never seen these unique ARF troopers in LEGO form, LEGO drew inspiration from them with this battle pack – creating a group of unique Clone Troopers who feel indicative of that source material, although obviously, they are presented here in the Phase II form of armour instead. I really like the unique colours and patterns for these figures, and hope to see more of them in some format in the future. 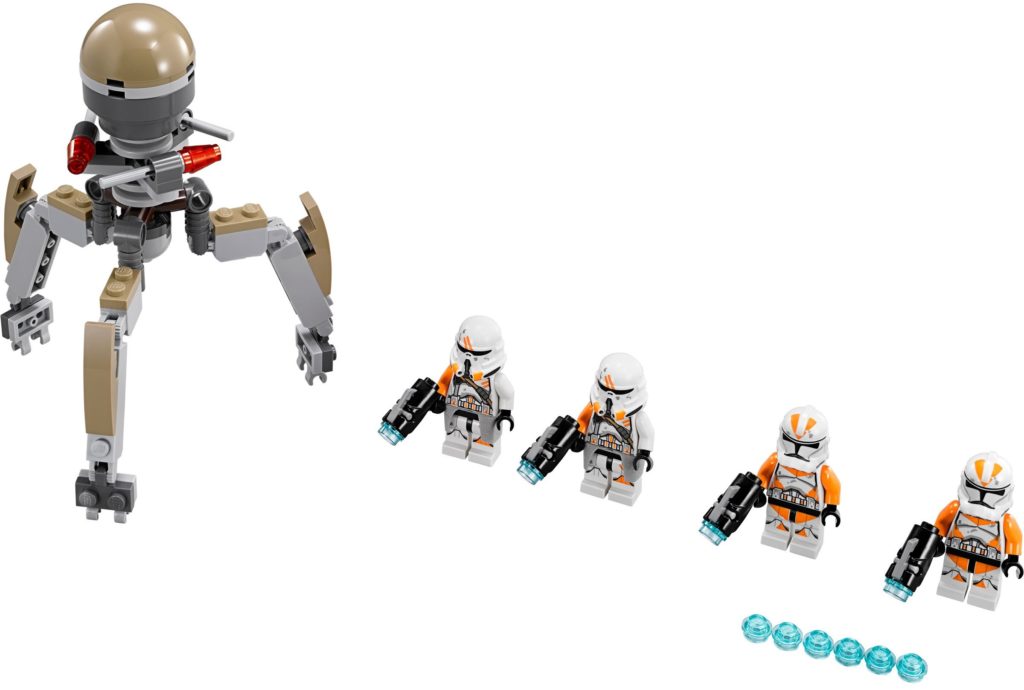 2014 also brought some incredible battle packs – including arguably my favourite LEGO Battle Pack to ever be created. I am, of course, talking about set 75036 – Utapu Troopers, one of two sets which has given us a Phase II 212th Attack Battalion Clone Trooper in LEGO form. The 212th troopers are distinctive, with bright-orange highlights denoting their affiliation to the legion. Within the Star Wars universe, they serve underneath Commander Cody and General Kenobi – and served at many key battles during the Clone Wars, including the Battle of Umbara, where they fought alongside the 501st.

These are characters which I wanted to see LEGO tackle for a long time – so getting a pack of two troopers, and two Airborne Troopers, in 2014 was honestly incredible. It is still one of my favourite packs to this day – and is absolutely a great way to get your hands on some cool and easily-recognisable LEGO Phase II Clone Troopers.

It is worth noting a 212th Trooper was also included in the Umbaran MHC, a set which released in 2013. The colour used here is more yellow than orange, however, making this trooper closer to a 327th Star Corps trooper than a 212th Attack Battalion trooper. 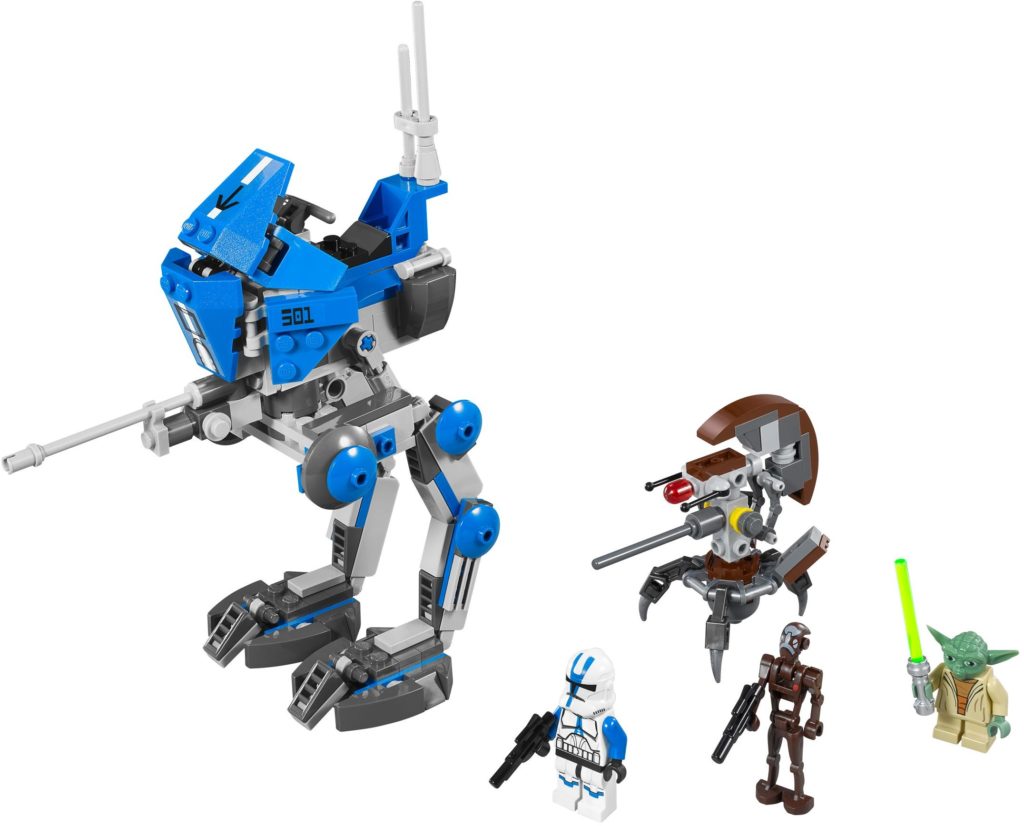 I don’t think it would be right to do a piece inspired by the new 501st Legion pack without touching on one of the original Clone Wars sets which brought us our first Phase II 501st trooper – the original rendition of the 501st AT-RT. This trooper also came in the Z-95 Headhunter set, and a Phase II rendition of Captain Rex, the 501st Legion’s commanding officer, also came in later Clone Wars sets. The design for the 501st trooper here is like the one which we can see in the upcoming 501st Legion pack – although this design is certainly more simple, due to the time when it was created. It is nice to look back at this pack and reflect on how much the designs for LEGO minifigures have changed over the years – with new renditions of existing characters packed full of unique details. 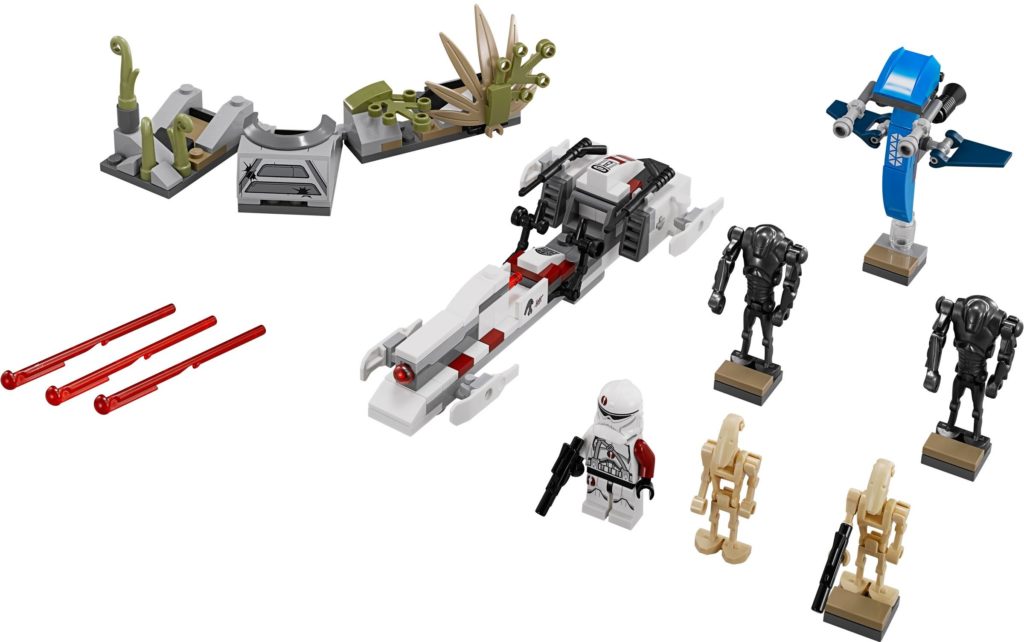 Set 75047 presents an opportunity to get one of the arguably most unique and most interesting Clone Trooper Phase II designs which is out there – a 91st Recon Corps trooper, who many individuals like to say is the named trooper ‘Commander Neyo’ from Episode III: Revenge of the Sith. Whether you believe this is Neyo himself or just one of his troopers, it is undeniable that this is a fantastic and unique Clone Trooper from the third episode in the prequel trilogy – and is a character who many fans probably never expected to get their hands on. If you are a fan of clone troopers then I doubt you will want to miss this incredibly unique LEGO Phase II Clone Trooper. 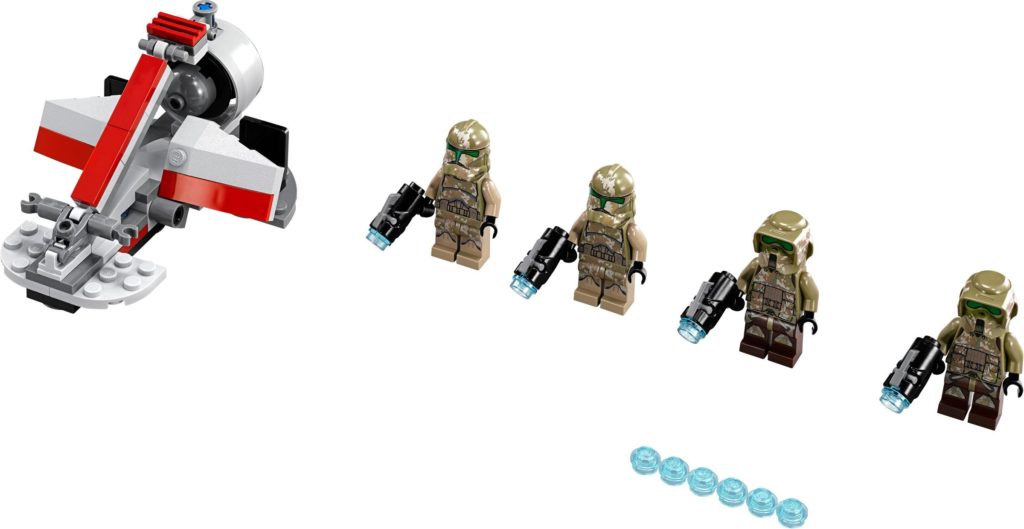 The second Clone battle pack to debut in 2014 alongside the awesome 212th Attack Battalion troopers, the Kashyyyk troopers pack brought more unique clones into the fold. This pack included two of the Kashyyyk scout troopers – the most recognisable Clone Troopers which are seen on the planet in the film. They feature their unique jungle-style camouflage, and incorporate some cool unique printing for the scout trooper helmet. The Phase II Clone Trooper is also included here in a fictional rendition which matches the camouflage colours of the scout troopers, and I must admit, this trooper design looks awesome. I could easily picture a group of these troopers deploying alongside Commander Gree – so I think LEGO did a really good job creating something believable. 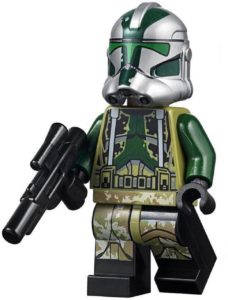 And speaking of Commander Gree – we can’t forget him, having been packaged in to numerous Kashyyyk sets in his awesome Phase II armour in recent memory.

So, there we go – a look at the different variants of LEGO Phase II Clone Trooper. What did you think? Do you have a favourite? And what would you like to see LEGO add to the trooper ranks in the future? Let us know in the comments below, and stay tuned for even more here on the Firestar Toys blog soon!

It’s beginning to look a lot like… Christmas LEGO Minifigures!