The staple of the larger LEGO Marvel sets – especially from the Avengers wave, is the Quinjet. Along with the Milano, it has been remade countless times. The Quinjet is a Marvel ship that primarily the Avengers use throughout the MCU, specifically in the Avengers films. So far, LEGO has released five minifigure-scaled Quinjets. Today, I will examine each one, to determine which Quinjet is the best. For simplicity’s sake, I will not cover any of the micro-build Quinjets, such as polybags and throw-ins from sets such as the large Helicarrier. I will only review the set-based ones which are meant to be interacted with by minifigures.

2012 saw the release of LEGO Marvel’s largest set, retailing for $70 USD, and it so happened to be our first Quinjet. We received a reprint of Loki, Thor, and the Chitauri – all of which are still great minifigures. LEGO did however release a newly printed Iron Man minifigure which, in addition to the new Black Widow, remains exclusive to this set, to date. 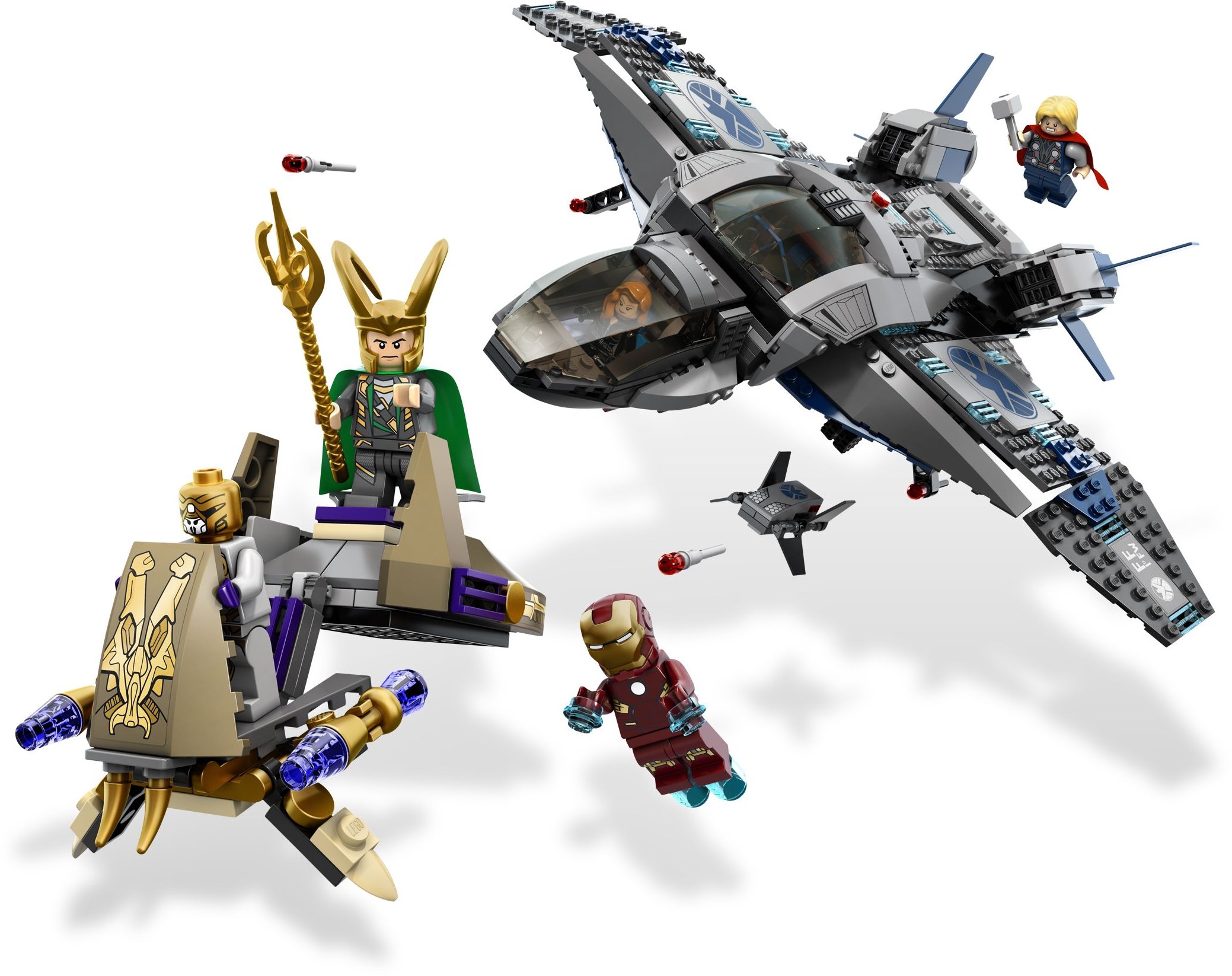 To get it out of the way, the Chitauri carriage was a great throw-in, as you could re-create scenes from the final battle. The Quinjet itself was movie-accurate to the first Avengers movie, although it would’ve benefited from a gun-metal grey colour. Another inaccuracy was that the fans on the wings, present on the movie version, were missing on the LEGO one. The brick-built one could fit one minifigure in the cockpit, which was understandable as it didn’t have to be scaled to a minifigure as the real one to a real person. The second windscreen piece could be opened to reveal some seating areas for some LEGO minifigures.

The wings and flaps were adjustable to suit the builder’s liking. The back was able to be opened, giving access to a small cargo space. Below the wings, the plane was equipped with flick-fire missiles, which could be shot at enemies. The primary play-feature of the set was its ability to launch a drone via pressing a red, circular tile on top, deploying the drone from the underside. Overall, LEGO did quite a great job with this variant of the vehicle, especially considering that this was its first brick-built form. 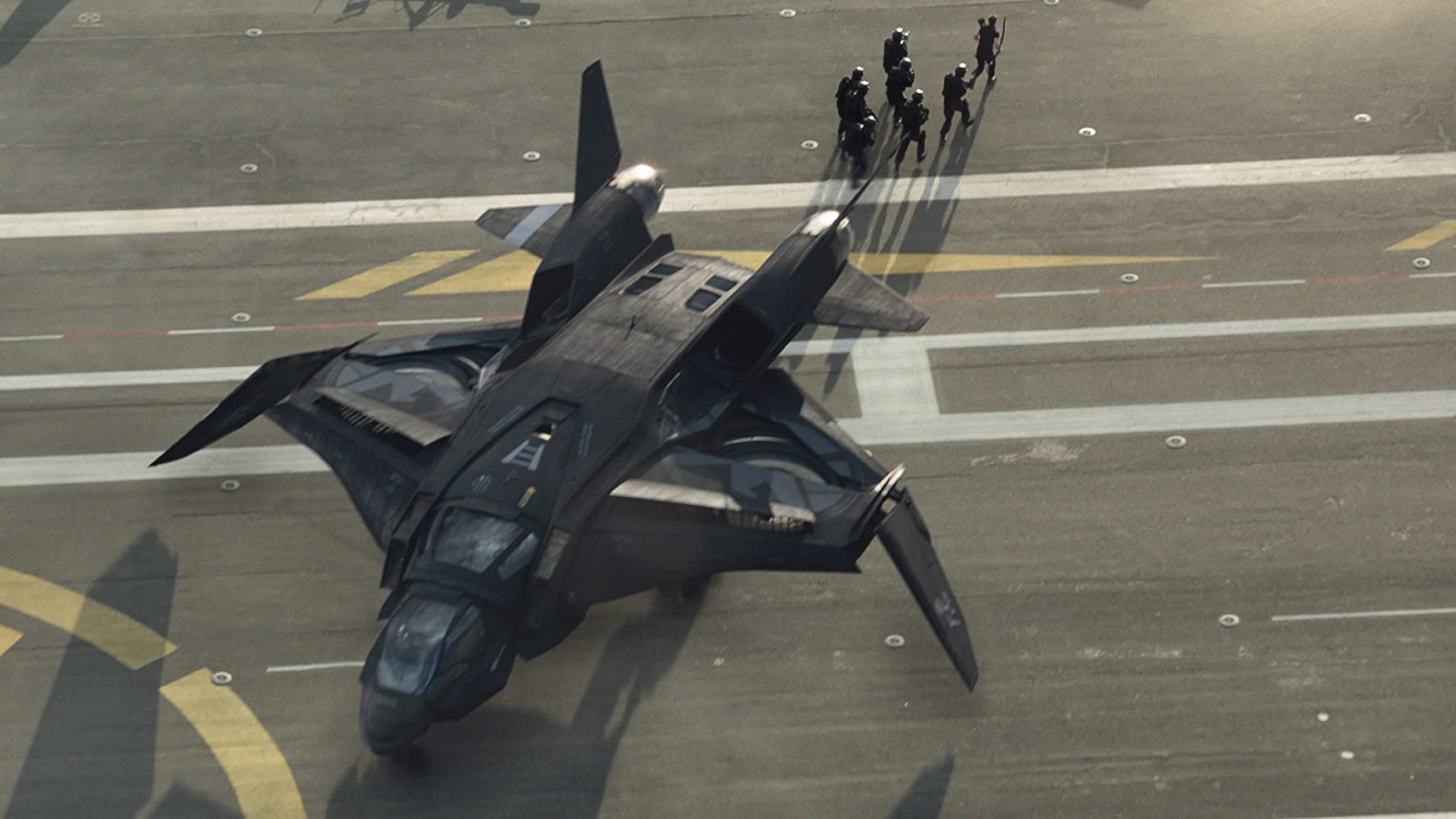 As Avengers: Age of Ultron released in 2015, LEGO decided that it was the perfect time to release their second Quinjet for $80 USD. This set gave us repeats of the Iron Man Mark 43 and Captain America. However, we received our first Vision minifigure, an updated Black Widow, and our Ultimate Ultron, who was very detailed.

The colour scheme for this one was vastly different from the 2012 version, and in my opinion, my favourite colour combo. Although cool-looking, the colours were inaccurate as the movie version had more grey, whereas the brick-built one was primarily white. The LEGO one also missed the red accents. It did capture the general sleekness of the movie model. The cockpit could open, fitting one minifigure. The nose of the vehicle could also be angled, with the use of hinged joints.

Again, like the previous version, the wings and flaps could all be adjusted. Towards the mid-section, stud shooters were present, which could be aimed at Ultron. There was an opening door at the back to reveal very little cargo space for some tools and accessories. Under one wing, a rope could be attached and with the push of the ‘A’ logo, could drop down a minifigure. On the other wing, there was a dual stud shooter, which could be hinged to shoot in many angles, and was able to be concealed easily.

Like the previous version, the primary play feature involved pressing an activator which would drop something. In this case, the black 2×2 square tile could be pushed down, which would open the bottom doors of the Quinjet, to deploy Captain America in a motorbike. This was actually seen in the movie. However, the interior space of this vehicle was sacrificed with this play-feature. The top flap gave you access to place the bike, to ready the play-feature. The van included in the set provided a cool play feature, in which it could be exploded via a modified 2×2 plate, to let Vision out. Overall, even though this LEGO Quinjet was better in design and colour, it severely lacked interior space.

One year later, following the arguably “best” Quinjet, LEGO Marvel decided to release another one in an $80 USD set. Although Captain America and the Winter Soldier were re-prints, we received an amazing new War Machine, Iron Man, Scarlet Witch, and Agent 13, in addition to an extremely cute micro Ant-Man figure. 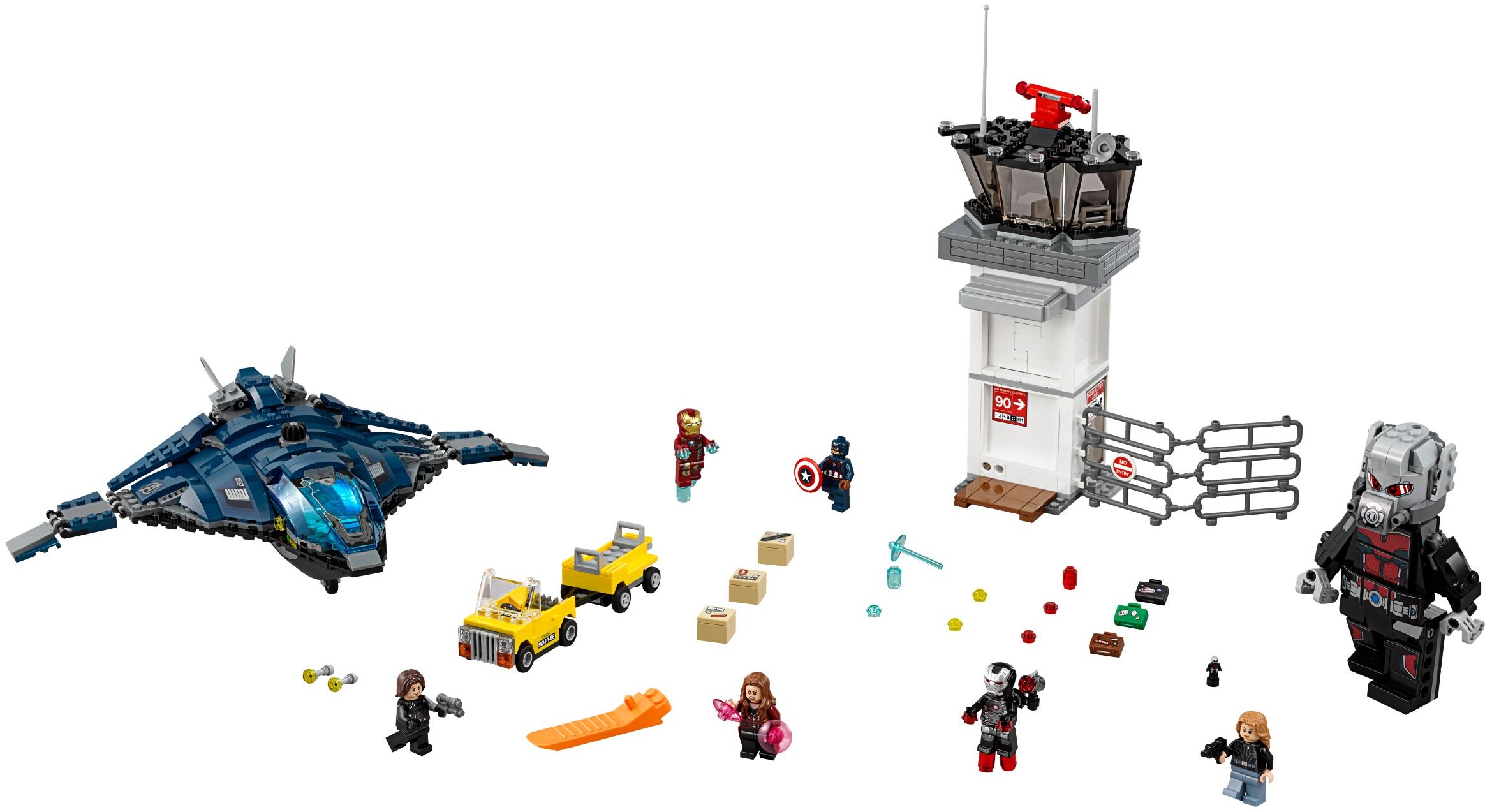 This time, the Quinjet wasn’t the main build of the set. It shared the spotlight with the airport tower and the Ant-Man buildable figure. Sadly, I cannot find any official images of the Civil War variant of this plane. This Quinjet was quite stubby, in comparison to the others. This time, the opening cockpit could fit two minifigures. Again, like others, the wings and flaps could be hinged. The back panel could be opened to reveal a two-stud interior space.

And yet again, the primary play feature involved activating a button in the middle which would trigger a feature under the jet. This time, when you turned the gear on top, a series of mechanisms would reveal a dual stud shooter from the bottom of the plane. Overall, this Quinjet wasn’t that of a surprise to anyone. The Airport Tower, the Ant-Man, and other builds were packed with many cool play features, all of which are discussed in my article: 2016 – LEGO Marvel’s Best Year.

This set is our smallest Quinjet to date, which retailed for $30 USD. We received a Captain Marvel, Nick Fury, and Talos the Skrull, along with Goose the Cat. 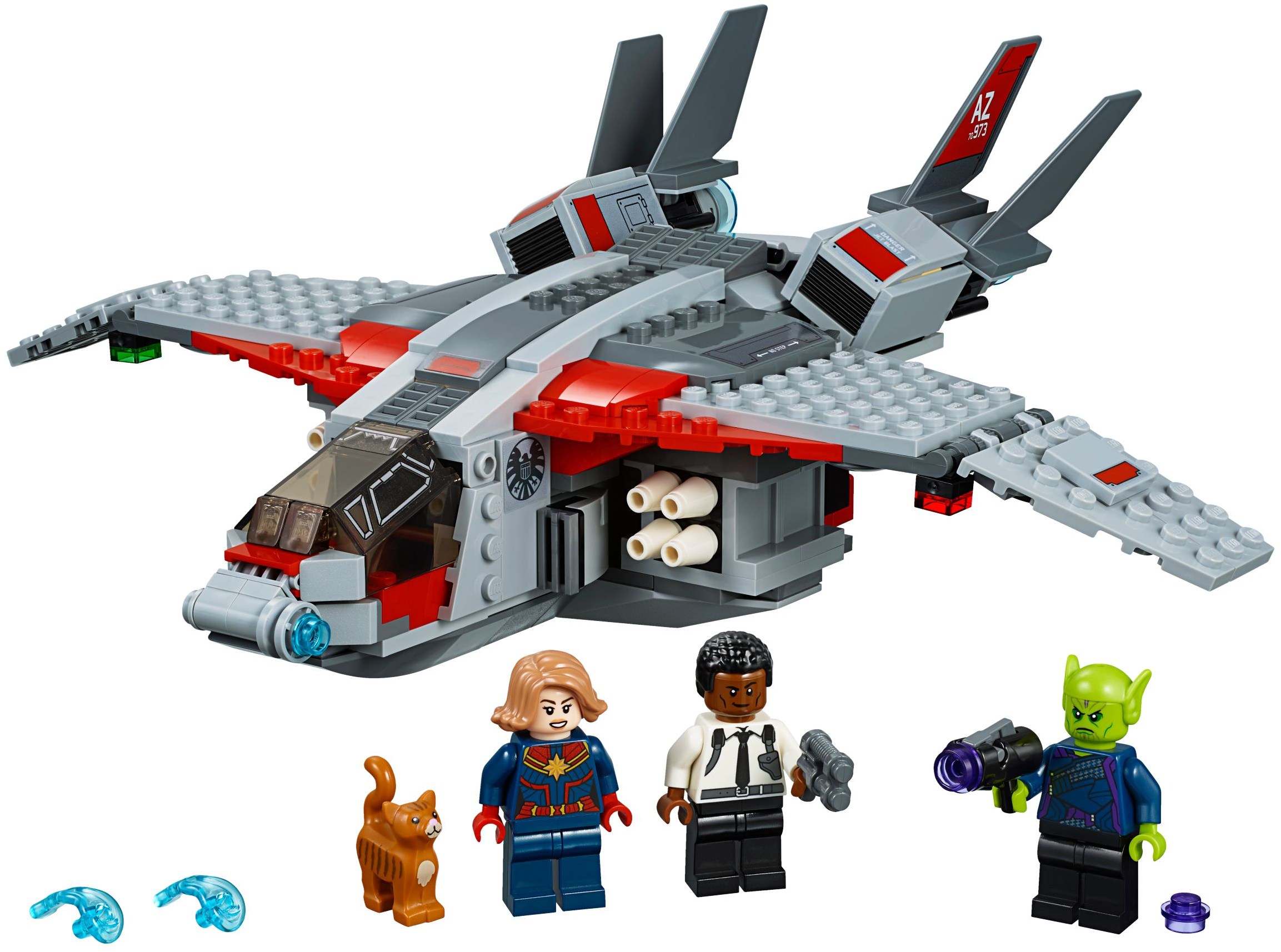 Despite its size, the build was very movie-accurate. Its colour scheme was bang-on correct to its movie counterpart. Again, the cockpit could be opened to fit a minifigure, in addition to movable wings and flaps. The primary play feature was where you could push two mailbox pieces on each side to shoot out eight flick-fire missiles onto enemies. Its interior space was quite cramped and could be accessed from the back. It was only two studs wide, so it was quite hard to fit many items there. Overall, it was quite a good Quinjet. It’s a great build for a great price. 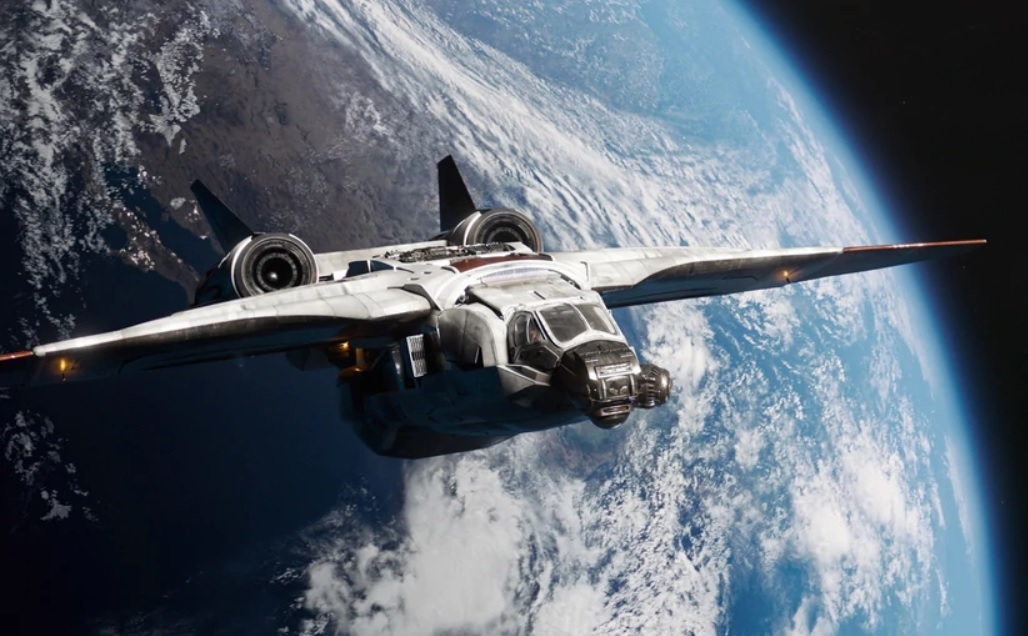 We received Thor, Black Widow, Hawkeye, Rocket Racoon, and two Chitauri in this set, all of which (except Black Widow) have remained exclusive to this set. 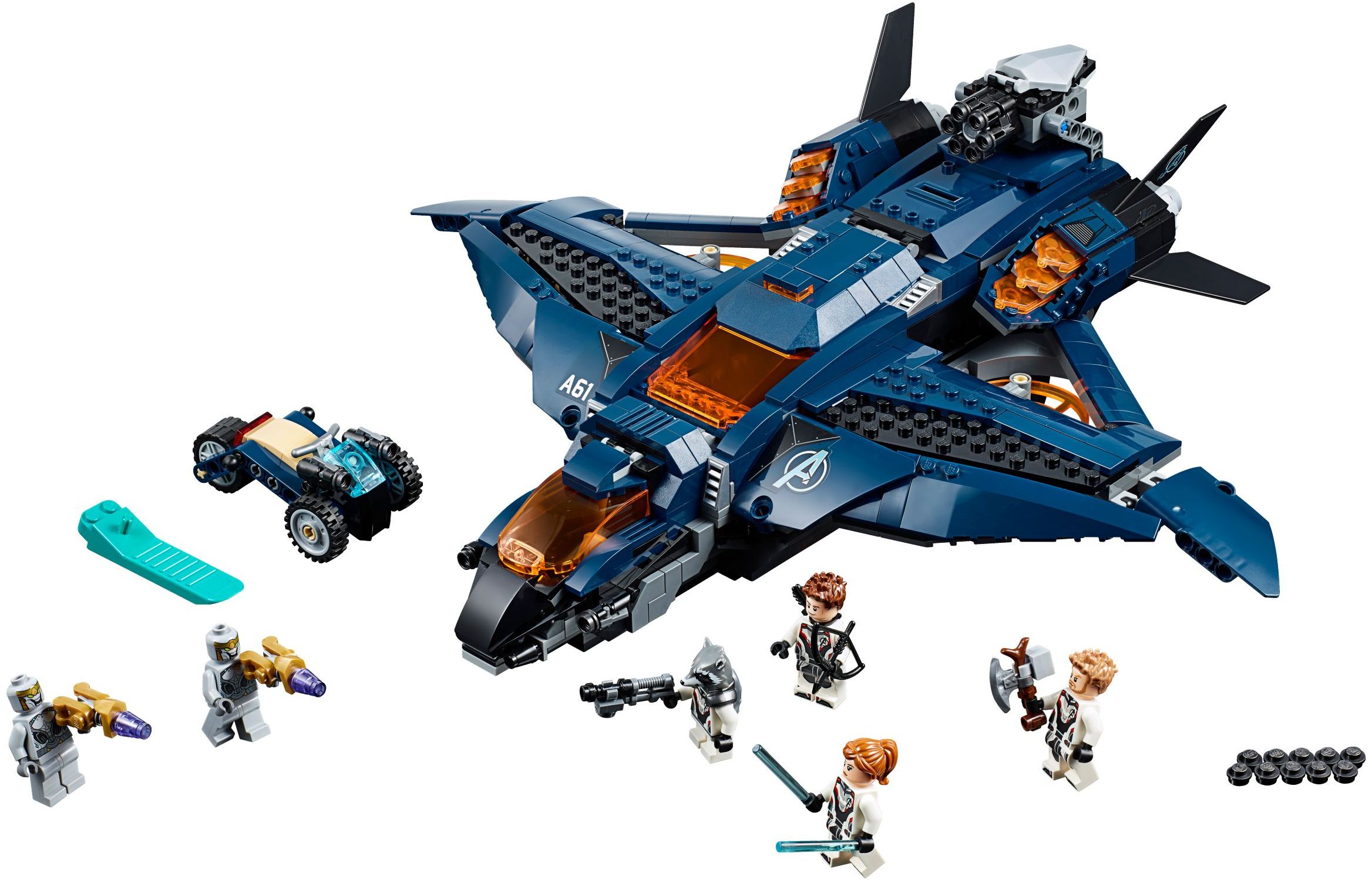 As the set name states, this is the Ultimate Quinjet, retailing for $80 USD. It takes all the best parts of the previous versions and combines them into one extraordinary build. Yet again, like all its predecessors, the Ultimate Quinjet fits only one minifigure in the cockpit. Stud shooters are present in close proximity to the cockpit. The mid-section can be opened via two hatches to reveal a spacious interior, allowing standing and sitting space for about four minifigures. At the jet’s rear end, another hatch can be pulled down, to reveal a small quad bike with stud shooters for an Avenger to operate. A six-stud shooter can be pulled up from the back, which can be used to shoot enemies. Finally, like other versions, the flaps and wings can be rotated. Overall, this Quinjet has amazing playability and display ability.

From a design and play aspect, the weakest LEGO Quinjet, in my opinion, is the 2016 – Super Hero Airport Battle (76051). It mostly suffers as it isn’t the primary focus of the set, so it lacks much. It’s too small and stubby for a Quinjet, and the proportions do not look right. In my opinion, it’s the only bad-looking Quinjet.

The second worst Quinjet is the 2019 – Captain Marvel and the Skrull Attack (76127). I believe that overall, this is a solid-looking Quinjet. And especially for its price, it is absolutely amazing what it was able to achieve. However, because it is a $30 set, it fails in comparison to the size of the other Quinjets, and therefore there is very limited interior space. I would also like to state, this Quinjet is very close to the size of the Civil War variant.

The 2015 – The Avengers Quinjet City Chase (76032) takes third place. It is by far, in my opinion, the best colour scheme for a Quinjet. It is sleek and is packed with many play features. The only place it misses is the interior space, which the next two have more of.

In second place, comes the 2012 – Quinjet Aerial Battle (6869). It’s quite surprising it has come this far, considering it was our first version of this vehicle. However, it does so much right in the playability and display ability function. But what really puts it above the Age of Ultron version is that of the larger interior space. 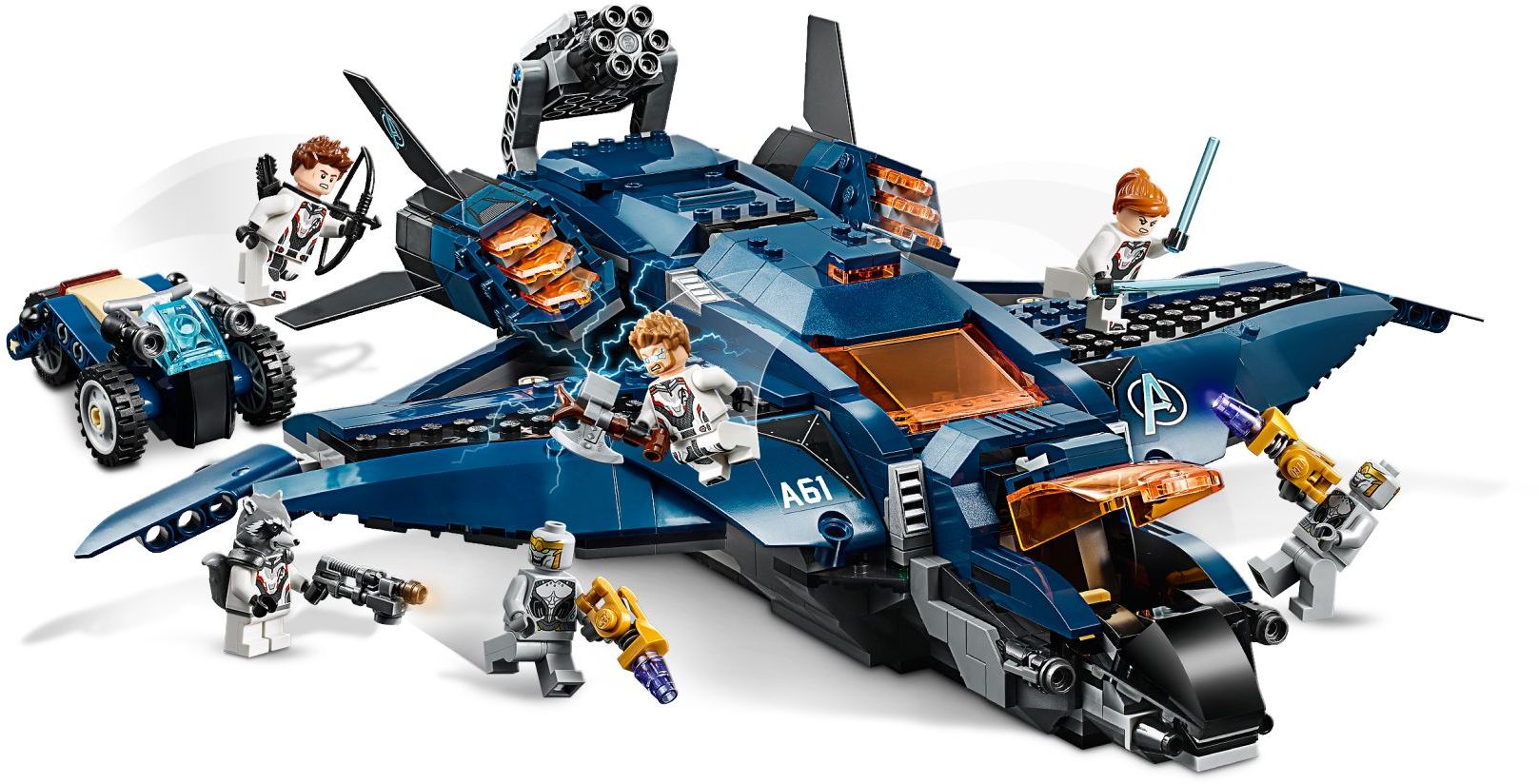 Finally, the 2019 – Avengers Ultimate Quinjet (76126) comes in first place. Do I have to say anything? It is everything you would want in a Quinjet. It has many play features, and is a beautiful display piece. The interior space is massive, especially if you remove the quad and the gun at the back. The colour scheme is also miles better than the 2012 one.

So that’s it! I hope you enjoyed my look back onto every minifigure-scaled Quinjet released by LEGO Marvel to date! I’m personally missing the first 2012 one and the newest 2019 one. Hopefully I’ll buy these soon though. Anyways, thanks for sticking with me through this one! Happy building!

If you liked this article, check out my other showdown where I discuss which Hulkbuster is the best.