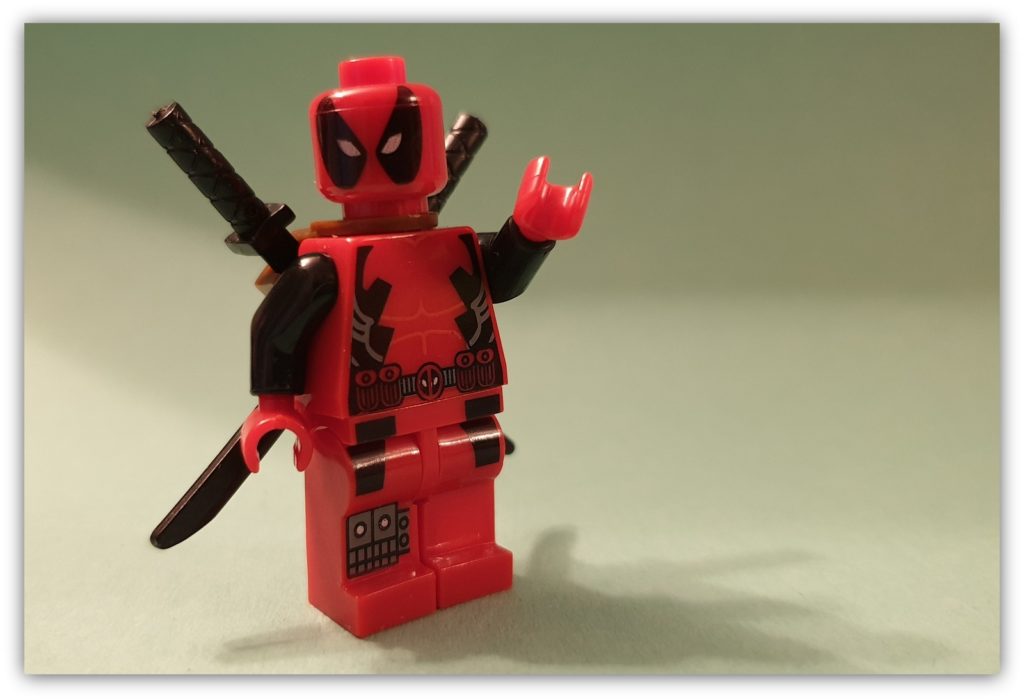 “Which LEGO set is Deadpool in?” It was an interesting question, and one that came with a little backstory for me. It was 2016 and the film Deadpool had been recently released to much hype and success.  Being into toy photography I assumed that an action figure would be released to cash in on this success; so, I paid a visit to a well-known large London toy shop to buy a figure. I was directed to the action figures area… but there was no Deadpool.  “Excuse me, where are the Deadpool figures?” I asked.  I was told that there wasn’t a figure; but that also it was unlikely that there would be, because “it’s not a kid’s film.”

That would have been fine, if it wasn’t for the fact that they had several WWE action figures; for example, James Bond toys and other figures and collectibles that were definitely more “not a kid’s film” than Deadpool. After all, Deadpool is at least funny.  So, I still don’t have an action figure Deadpool.  I do, however, have a LEGO Deadpool, so yay.

So, which LEGO set IS Deadpool in? 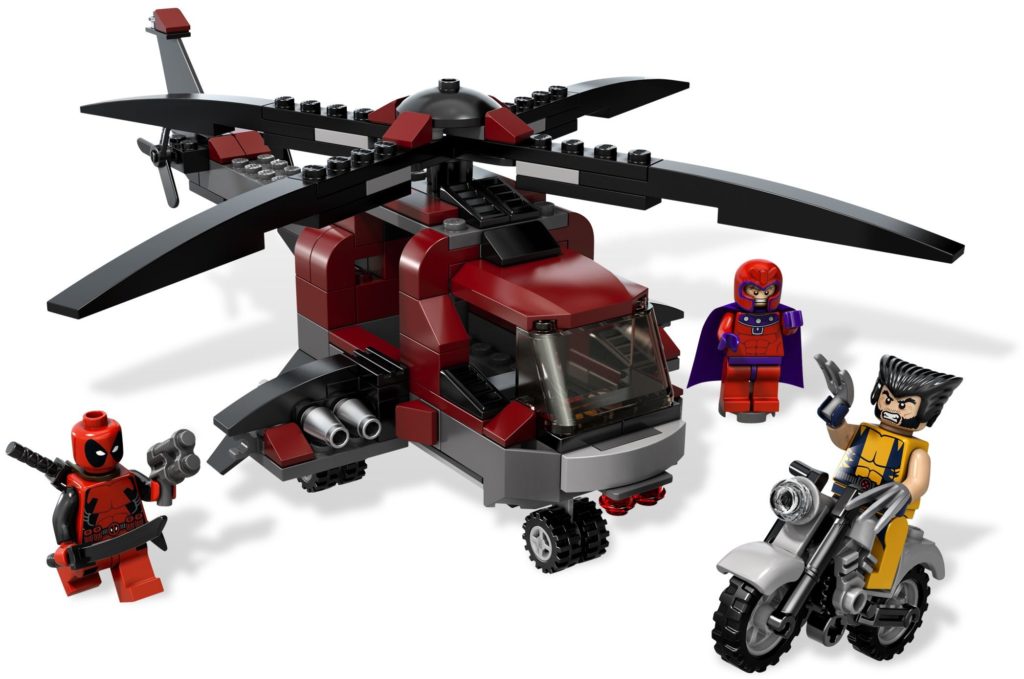 Well, there is a LEGO set with Deadpool in; it is set 6866-1 Wolverine’s Chopper Showdown, released in 2012.  And as you can see from the image, Deadpool is equipped with a crowbar, a sword and a gun.  However, if you have seen the film (“X-Men origins: Wolverine”) you will have seen that the character of Deadpool in the film really isn’t a fair depiction of Deadpool as we would commonly recognise him. However, it does mean that LEGO released one set with Deadpool.

LEGO did release two San Diego Comic Con (SDCC) exclusives in 2017 and 2018; Deadpool Duck and Sheriff Deadpool.  Whether you would want to consider these as Deadpool figures (as they aren’t actually Deadpool as such), or whether you would want to consider them as “in a LEGO set” (because they were produced as a limited run, for a specific event) is for you to decide. However, the character of Deadpool the Duck was released in 2017 as a graphic novel which saw Deadpool crossed with Howard the Duck, so in the Deadpool canon it does count. Sheriff Deadpool doesn’t have such a link being a combination of Woody from Toy Story and Deadpool (so if you have the parts, you can make your own!)

Deadpool (the character) was created in 1991 by Rob Liefeld and Fabian Nicieza. Originally designed to be a part of the Wolverine story, Deadpool was said to be an ex-special forces mercenary given healing properties. In 1997 he was given his own spin-off and the character truly came into his own with story arcs from Joe Kelly and Ed McGuiness. Now, Deadpool (“The Merc with the Mouth”) really came to be the one we know. In this instance, Deadpool really becomes the anti-hero on so many levels; he regularly breaks the “fourth wall” (where the character talks directly to the audience) by making references to the reader but also actively recognising that he is in fact a comic book work of fiction! But with so many cultural and political references, plus references to other storylines, arcs and just about everything, he becomes every comic-book geek’s most favourite hero.

The challenge though is this statement that I referred to earlier about “not for kids”. A lot of the material that is used for these fun action films can be quite adult in nature; whilst dressed in picture format there is a question about suitability for younger readers. Deadpool is at least pitched at a more mature audience.

What else is not for kids? 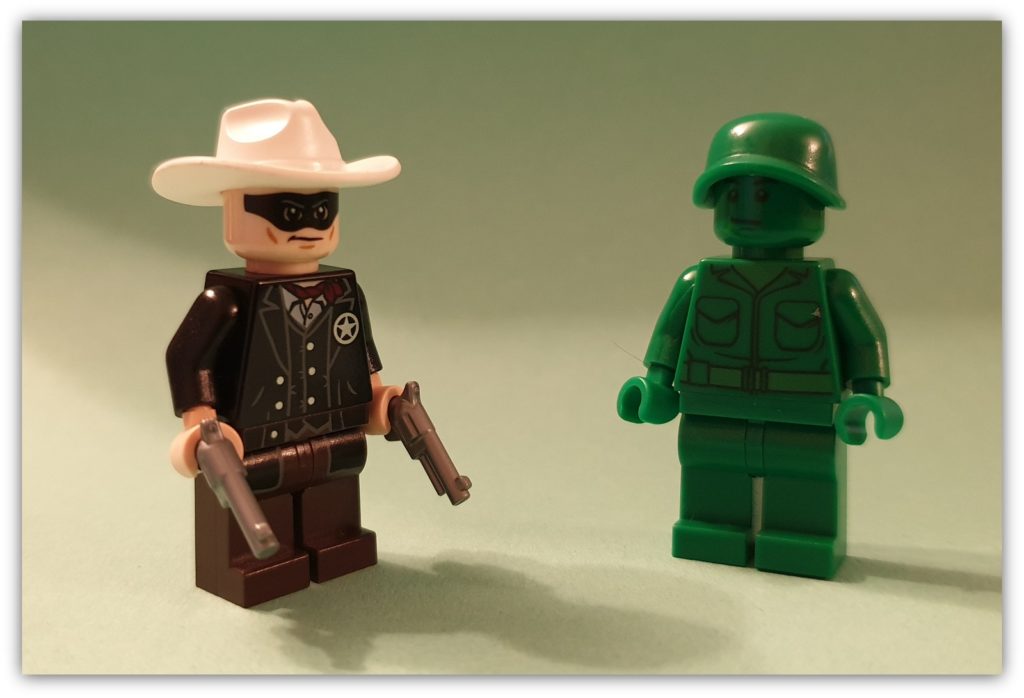 Growing up in the 1970s (yes, I am that old!), LEGO only came in primary colours. There was no brown, no green and certainly no pastel purple parts.  This was, I was told, a deliberate choice on the part of LEGO; without these earth tones (maybe not the purple) the young minds wouldn’t be able to build tanks and “war machines”.  It didn’t stop us, but camouflage was definitely not an option, unless you hid your tank behind a rose bush.

But in 1978, the first sword was released as part of Castle (Set 375-2).  The first rifle (a flintlock musket) came in 1989, the same time as the flintlock pistol.  The revolver (large barrel) arrived in 1996 along with the rifle; the small barrel (as seen in the hands of the Lone Ranger, above) was introduced in 2013.  Of course, it could still be argued that by using “pirates”, “knights”, “cowboys” and “a faraway galaxy” LEGO was playing homage to the film industry and the Saturday morning movies that children would watch.

But LEGO is for kids!

Much as there is a lot of awesome custom figures and parts out in the world, the focus for LEGO is young people; and there are a lot of people who will only ever see LEGO as children’s toy.  For a lot of the LEGO ranges and themes I can understand that thinking (the Heartlake Friends theme being a reasonable example of that) but being a bit of a geek/nerd about some things such as comic books and graphic novels there are some LEGO toys that have left me scratching my head, wondering “why did they release that and not a dedicated Deadpool set?”

To that end, I’m going to take a couple of LEGO sets, and delve. 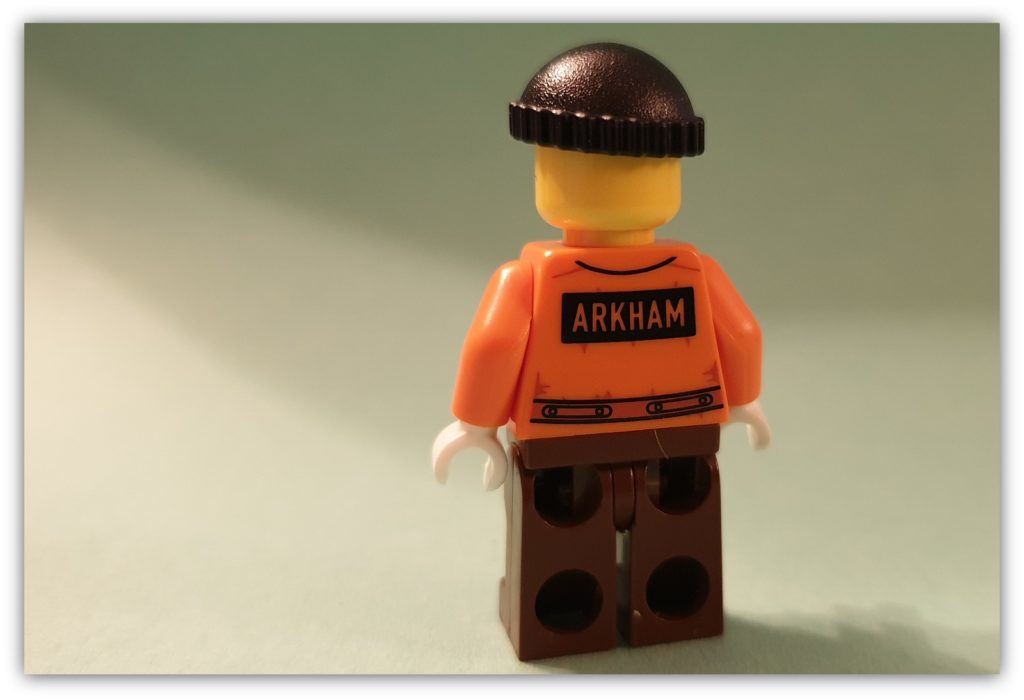 The Arkham Asylum is a fictional hospital/prison for the criminally insane on the outskirts of Gotham city. This is where Batman’s high-profile enemies are detained; so the likes of the Joker, Two-Face etc. Putting aside the fact that from a LEGO building perspective any one of these sets are brilliant to own and build, you have to wonder why this was released by LEGO; if you have read any of the DC comics, or even the critically-acclaimed graphic novel “Arkham Asylum: A Serious House on a Serious Earth”).  And as a special important disclaimer here: this novel is definitely NOT a happy, Adam West style of storytelling.

Batman and the Joker 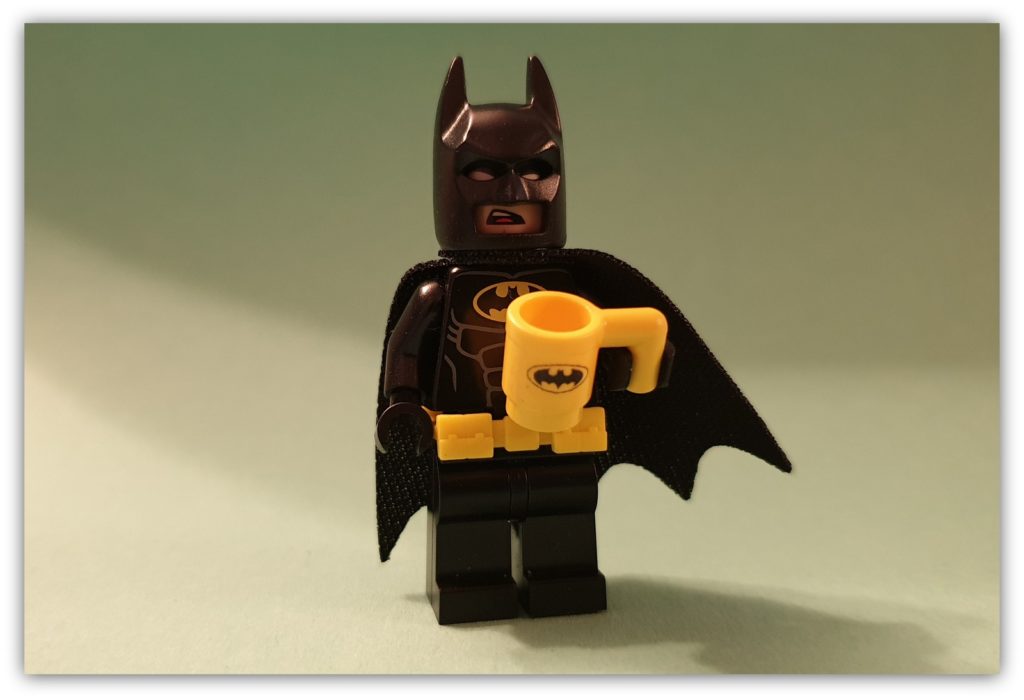 There have been many instances of Batman; whilst the movies have been action packed, depending on the story line they have all had a dark edge, especially the graphic novels, for example when the character Bane was introduced. Fortunately, this was all softened with the Adam West version with the “Holy Interlocking Brick System!” Robin, which was carried through into the LEGO Batman movie. 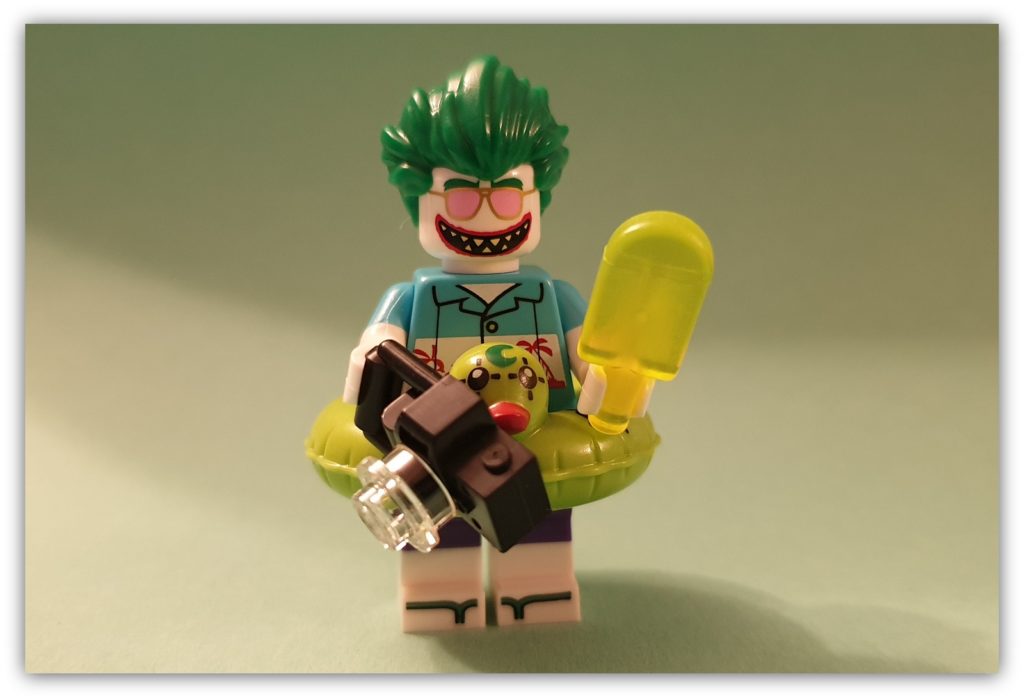 The Joker has also had that friendly makeover with Cesar Romero’s Joker. As a trivia fact I love that even under that white makeup Romero retained his moustache! And again, this friendly makeover was carried through in the LEGO movies.

However, It was the Vacation Joker collectible minifigure that made me ask what LEGO was thinking when they released it.  In 1988, DC comics released the graphic Novel “The Killing Joke” which featured a Joker in vacation attire.  I won’t spoil the story as it is a classic in the Batman/Joker collection, but it is generally seen as the backstory as to why the Joker is so insane and how the character “The Oracle” came to be. 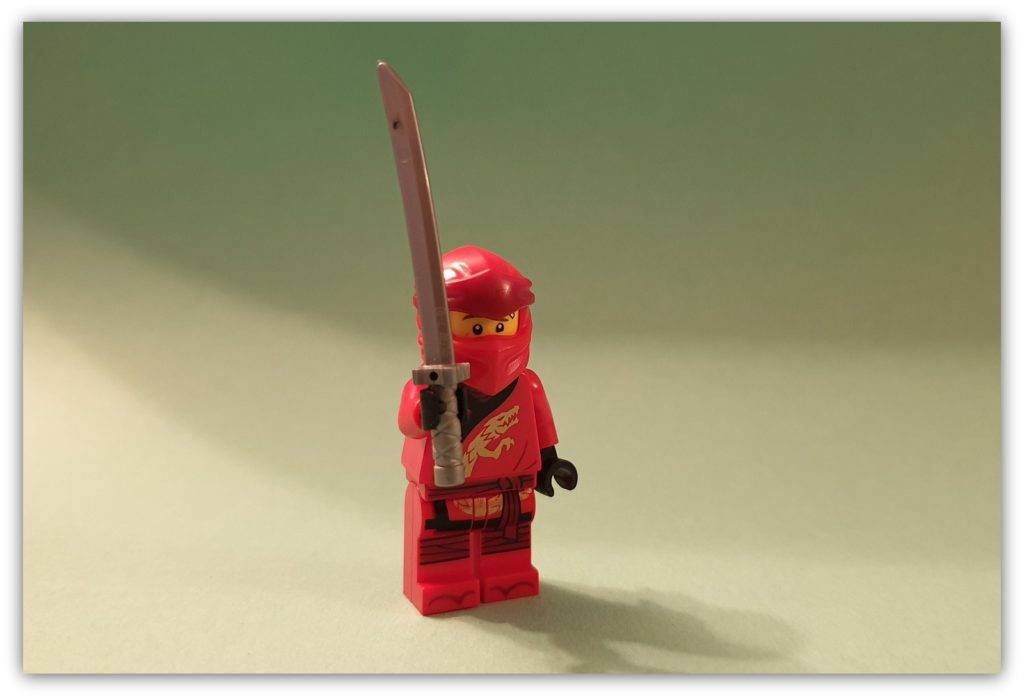 If you recall, LEGO want children to learn through play and why with the exception of the Army Men in Toy Story there has not been any tanks, armies or general war things (except of course for Star Wars with the Rebels, or the Blacktron, or the pirates, or the Western theme; but that was all in the past). Luckily, we have peace across the LEGO land now. What’s that? Chima and Ninjago?

Legends of Chima was a theme that ran from 2015 to 2017; it featured several tribes all at war with each other over the magical orbs of energy, or Chi. So, we had tribes of animals, but also weapons, and fighting.  This had been an offshoot idea from the longer-running Ninjago theme, which featured ninjas, swords, throwing stars and other items of peace and serenity.  And doesn’t that sharp, pointy thing look like it could hurt someone? 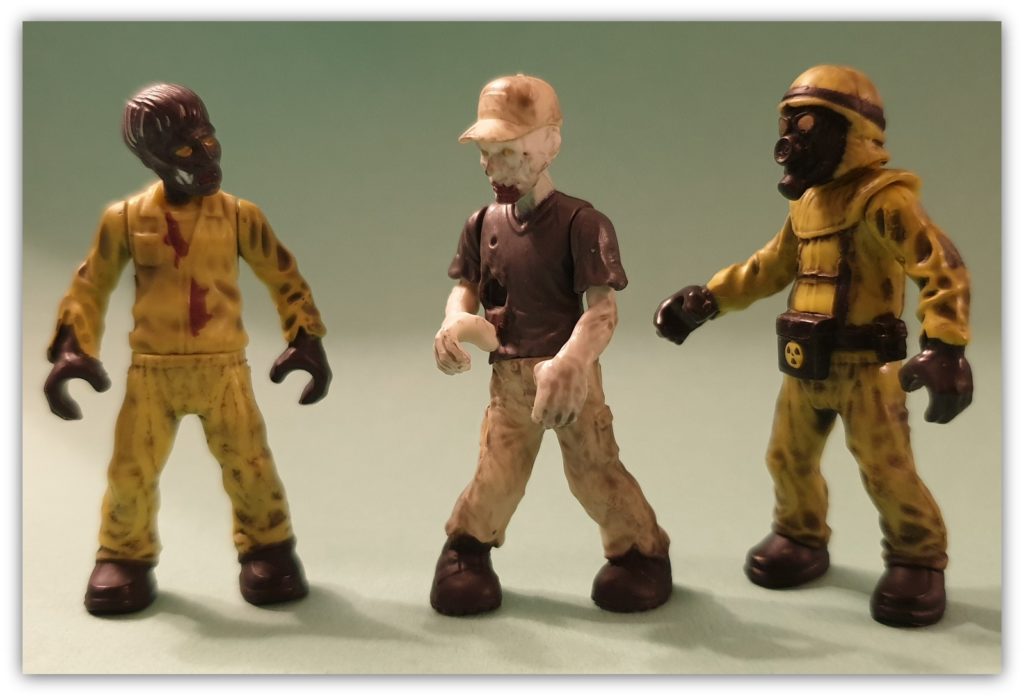 The challenge that LEGO has is that it does have to compete with a few other toy manufacturers who don’t have the same worries and concerns that LEGO has. MacFarlane Toys, Character Building Toys and MegaBloks also make interlocking brick connection systems and have  gone after different sectors of the market and their toys will cater for an older young person (if that makes sense).  Examples of these sets are Game of Thrones, Doctor Who and Walking Dead. And for the AFOL, these sets offer accessories, and figures that are a little less “friendly” than the standard LEGO minifigure; and with the interlocking compatibility will allow the AFOL to create more interesting dioramas that are more age-appropriate.

But for really adult figures… 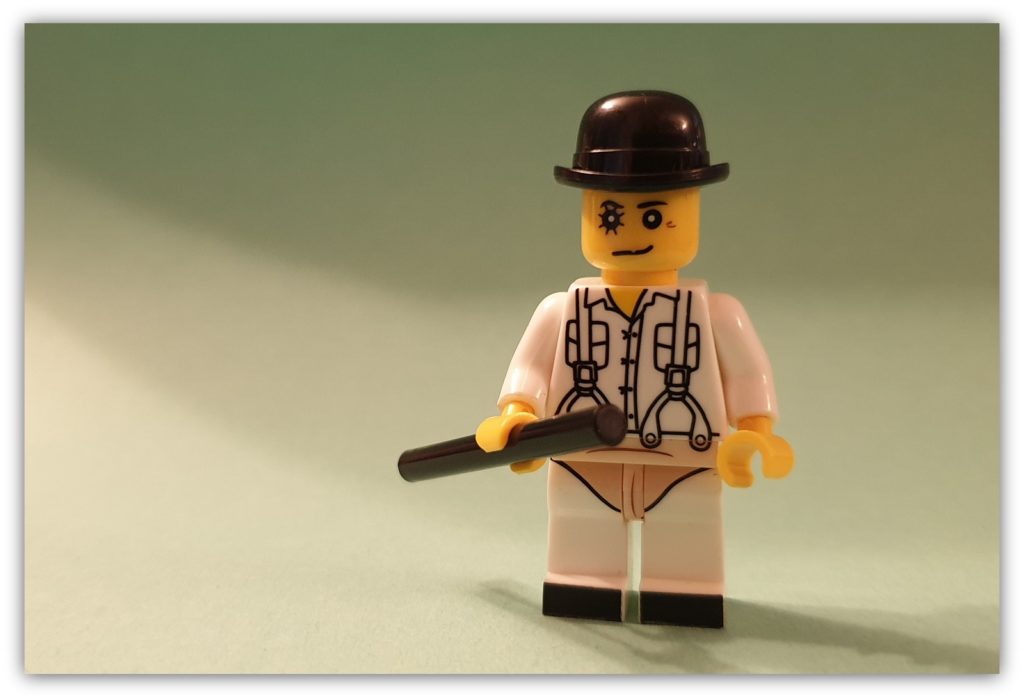 Of course, for adult-appropriate figures, there is a need to head to the custom world.  Here, you will almost certainly find the figure you were looking for; and in some cases, you will find levels of customisation that fall more to the world of art collectibles than play.  The droog from Clockwork Orange is a good example of that; although it looks like a standard figure, if you have read the book (or seen the film) you will recognise the hidden malice in that figure.

“Crime’s the disease, meet the cure. Okay, not the cure, but more like a topical ointment to reduce the swelling and itch” – Deadpool

As I wrote this article, as well as referencing Brickset and Bricklink, I also looked at IMDB for the film references.  I realised that the DC comic films that LEGO have released have all been 12 or 12A (Batman, Batman begins, plus Iron Man, Captain America, etc). Deadpool, however, has a 15 rating. I suspect it was that most licensed themes are aged at the teen/tween market.  The challenge is of course that in the DC / comic book world there are many, many different official and unofficial story arcs (Batman’s back story is relatively straightforward, whilst the Joker’s is more varied, possibly assisted by the character’s mental instability) and story lines that can deal with some highly complex and psychological issues.

Researching weapons in Bricklink, I noticed that the last official “real” gun was in 2013 with franchised Lone Ranger theme. Since then, there have been further swords created but all new firing weapons have been identified as “blasters”.  LEGO has to walk a very fine line; much as its original thinking was not to glorify or promote war, its principle market (young people) will be bombarded with these images all the time; whether it is the news, or in comics or films. Psychologists have established that a key aspect of play is enabling the young person to make sense of the world around them through creating storylines. LEGO, with its wide range of parts and accessories, can be a key component in enabling that creative learning.

Of course, LEGO is a business and in order to retain its market share it will need to move with the times; that will result in associating itself with films and franchises which mean creating the very tools that it would seek to avoid.

Are LEGO Star Wars misprints worth anything?