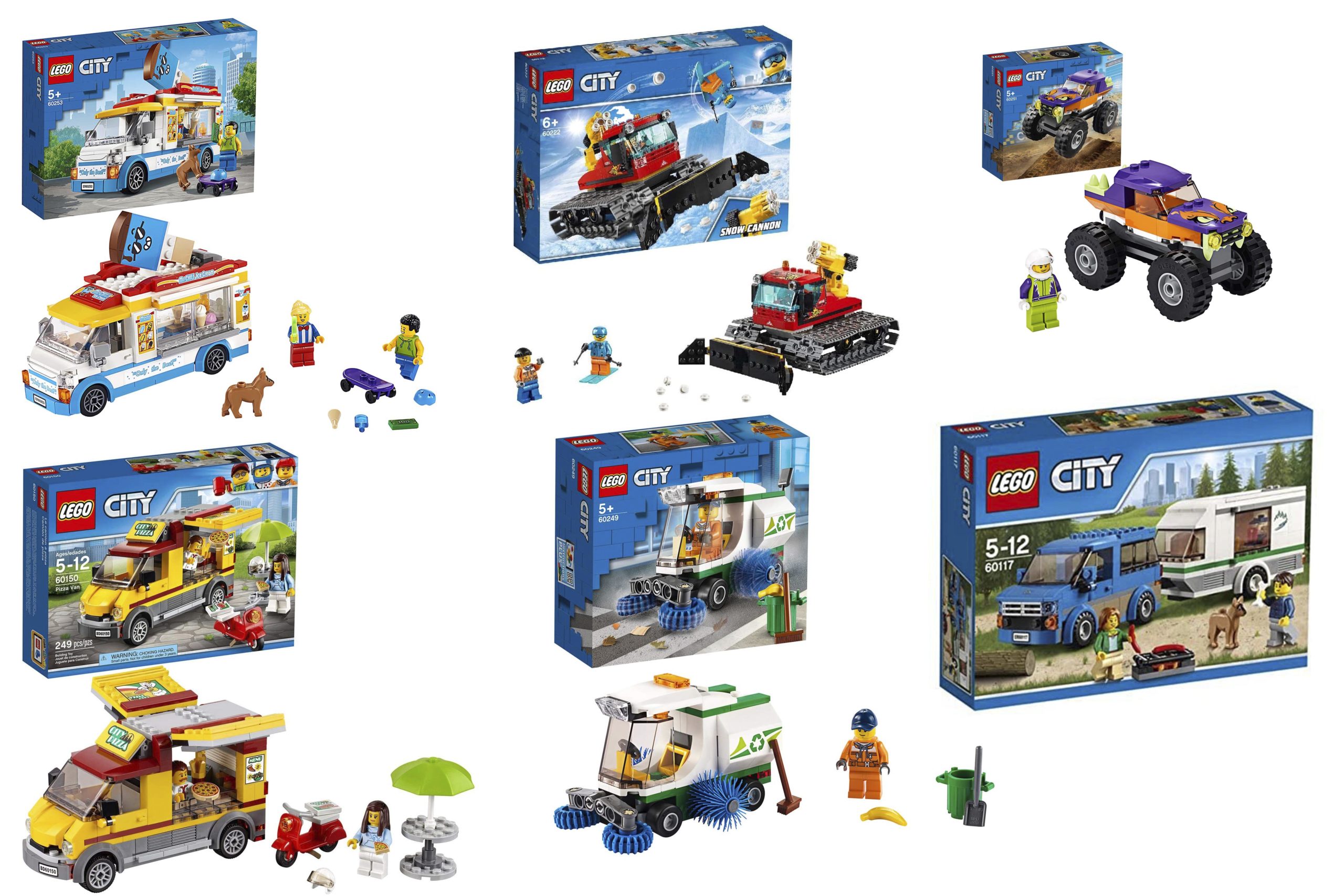 In today’s blog post, I thought we would take a look at some more products from the LEGO City line, with a peek at the LEGO City Great Vehicles line.

The LEGO City Great Vehicles line introduces lots of more involved vehicle builds into the LEGO City line-up – providing a level of detail and depth to the builds which we would not get in traditional city sets. This line has also allowed us to get a lot of unique vehicles which we may not have otherwise received – allowing us to add some depth and variety to our LEGO cities.

In today’s article, we are going to take a look at a few of these vehicles

, and what it is about them which makes them so great. 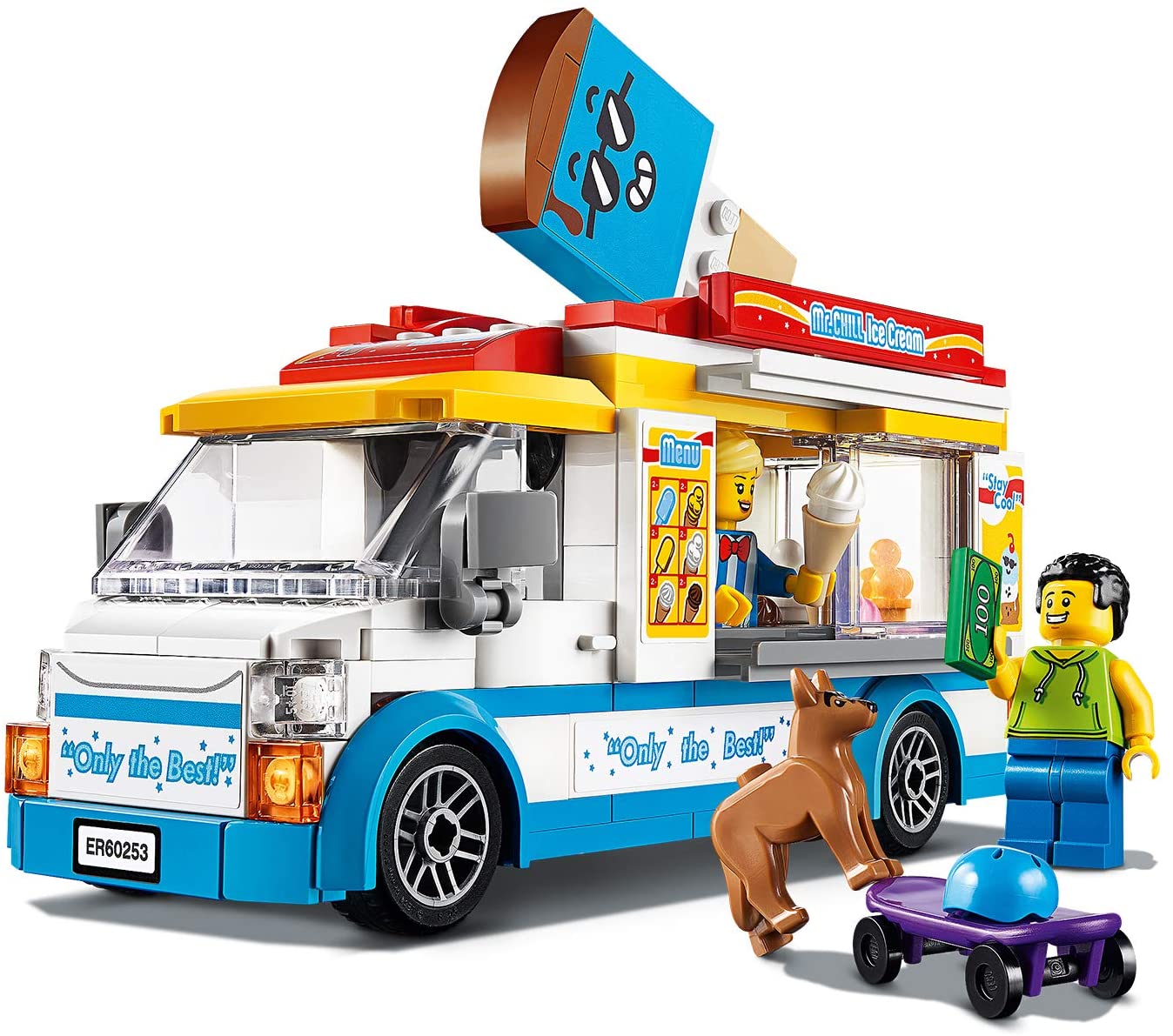 Up first for today, I thought we would take a look at one of the sets which is still available right now

– the Ice-Cream Truck. This is a fantastic set for a variety of reasons, not least because it incorporates a variety of great details which we don’t usually see in a build like this. Everything from the graphics to the details on the interior of this build with an assortment of ice creams really helps to add a lot of additional detail to this build. Another thing I love with this particular vehicle is the colour scheme – as the vast assortment of blues, whites, yellows and reds help to create a really vibrant looking vehicle which captures the idea of an Ice-Cream Truck nicely.

As LEGO continue to offer more sets themed around beaches and more summery locations, this is bound to be a fantastic addition to those sets, expanding play patterns and also adding even more options for display within your LEGO City. 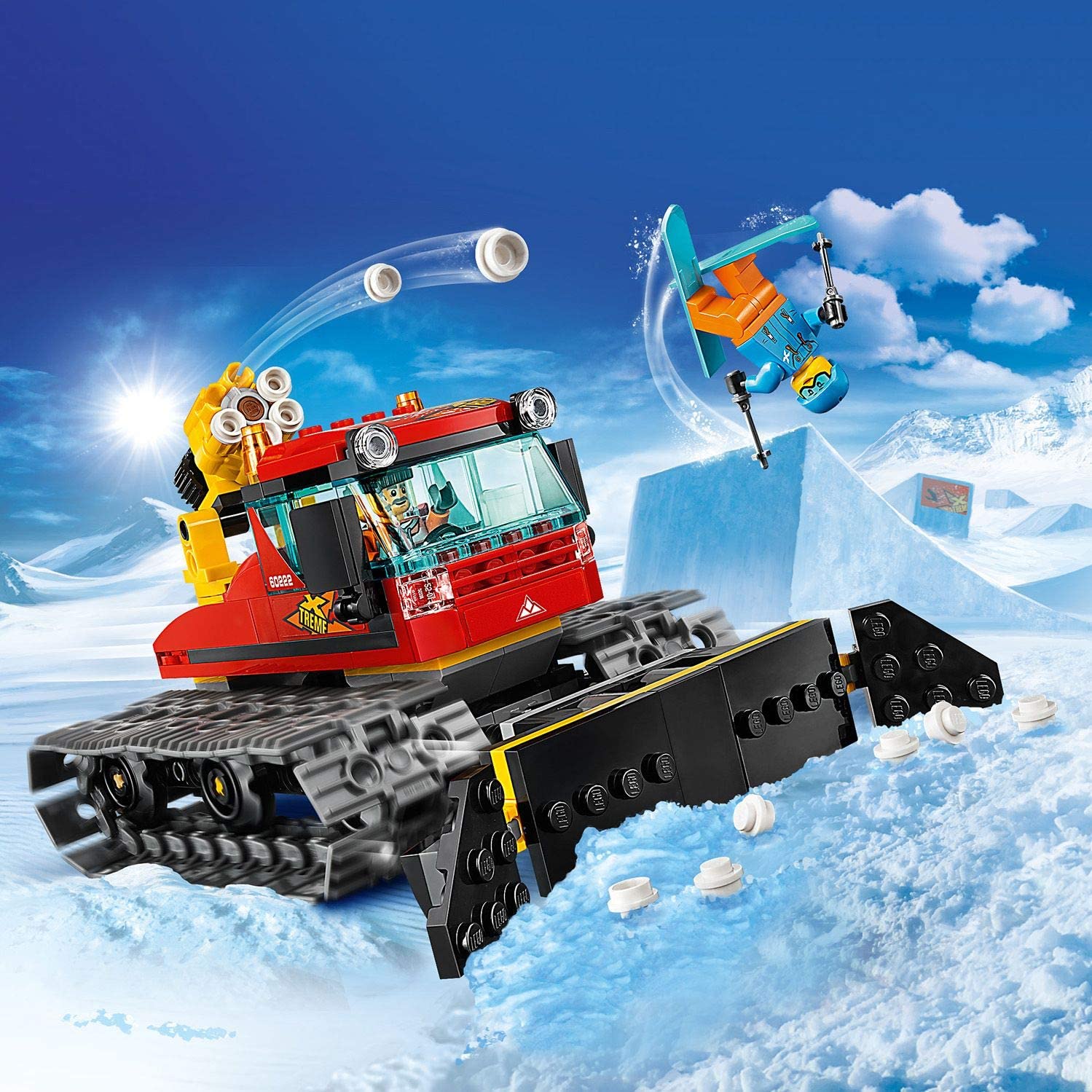 Next, I thought we would look at one set which release fairly recently and which complimented some of the fantastic Arctic Exploration sets which LEGO released recently – the Snow Groomer. Whilst the stud shooter for snowballs on the back doesn’t make particular sense to me, I can see kids enjoying this build and getting a lot of fun out of the way that the six-stud launcher mechanism works. I think the design of this vehicle is really nice and rugged – with the thick, industrial-grade treads nicely complimenting the idea that this is a vehicle which has been built to tackle the trickiest of terrains. The colour scheme used for this vehicle is nice too, with the reds and yellows looking nice and complimenting the lights and other highlights which the build of this vehicle features.

Overall, this is a strong build and one which I wouldn’t mind adding to my collection if I had the capacity for it. I like when LEGO try new and unique things, and this is the type of build which we are unlikely to see again for some time, so I have a lot of appreciation for this build. 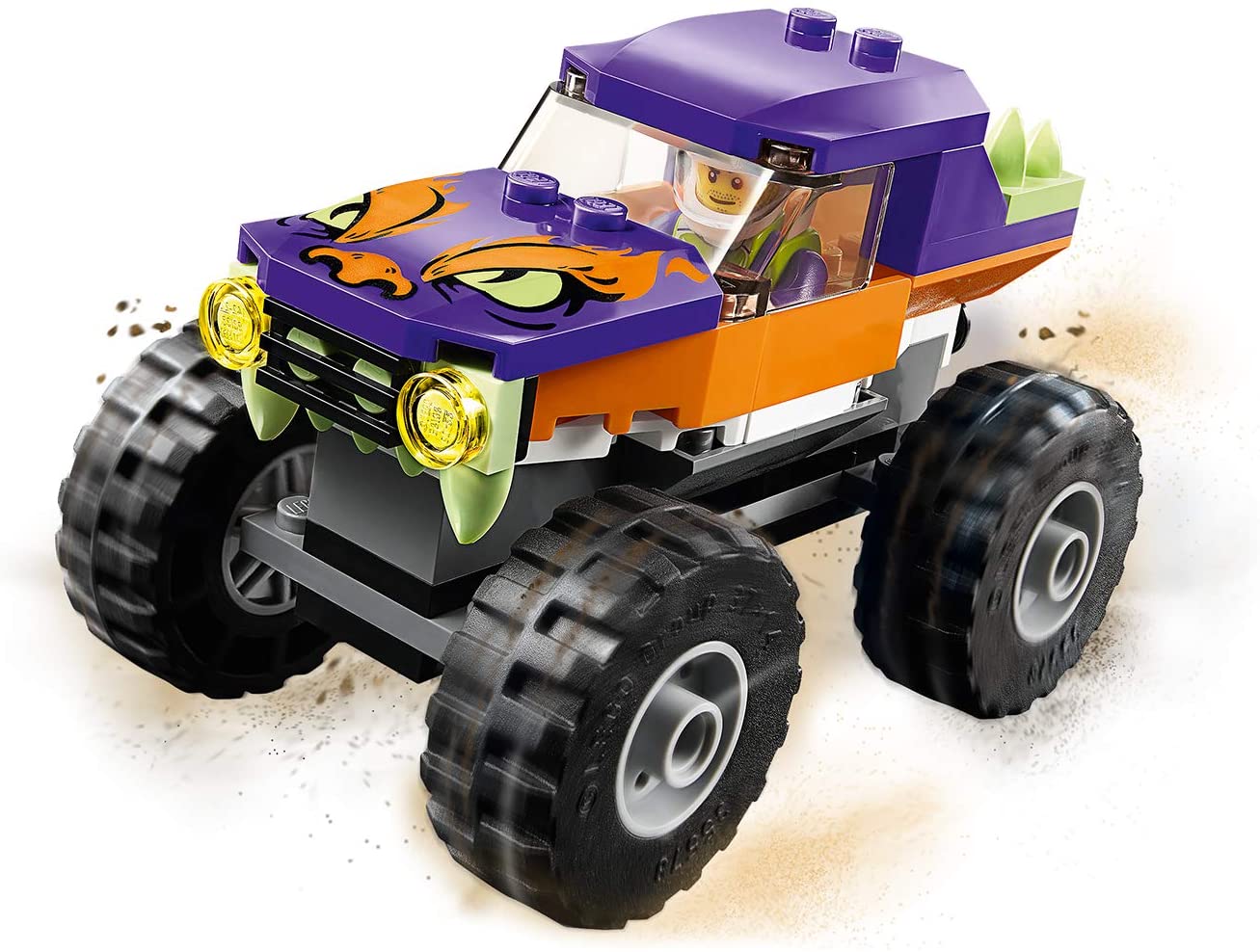 I also thought we’d take a moment to highlight one of the smaller sets – which tends to retail for about £10 here in the UK. Whilst the build on this particular Monster Truck is perhaps not as detailed as I have come to expect from the Great Vehicles line, I do like the colour scheme which is on show here. I think the purple and orange colour scheme contrasts nicely – and takes me back to some of the classic Two-Face vehicles which we have received in the DC Comics line in the past. This is definitely a fun set, and one which I think is likely to be popular with younger fans who want a bulky vehicle that they can have some fun with. 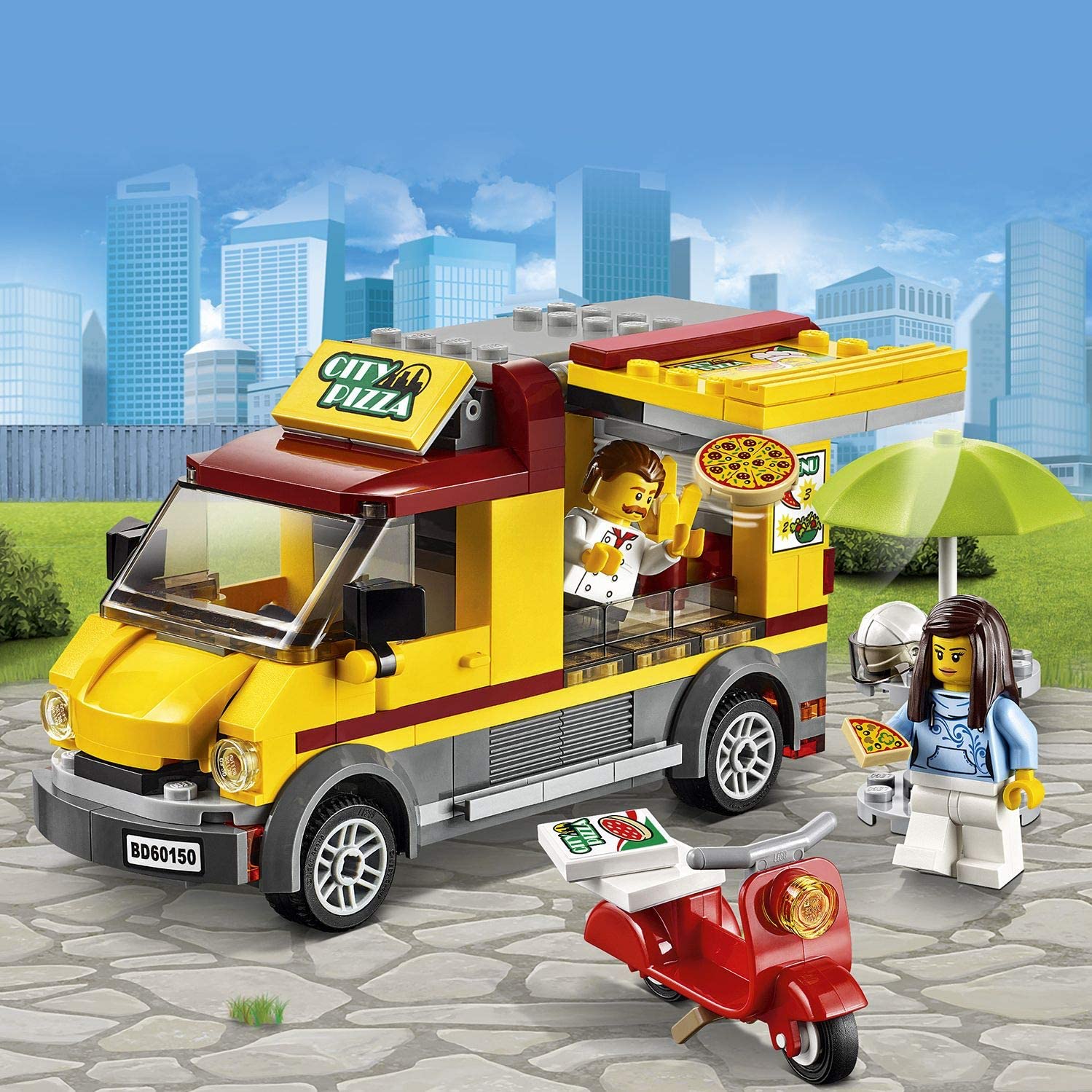 One of my favourite Great Vehicles sets which LEGO have created, and the only one which I own, is the LEGO City Pizza van. I absolutely love this set for a variety of reasons. Firstly, the colour scheme is gorgeous. The yellow colours blend with the dark red colour scheme well – creating a great looking vehicles which actually emulates the colour palette of the LEGO pizza truck, too. The way the rear end of the vehicle works is great, too, as I love the way the access panels can fold open on both sides, providing easy access to the interior. The interior itself has some nice simulated details which help to make this vehicle feel more functional, and the inclusion of the quarter pizza piece was a nice new addition at the time of this set’s release, too.

Combine this with the inclusion of the wonderful Scooter piece, and the small table with the umbrella, and you have a nice little set which lends a lot to a LEGO City display. 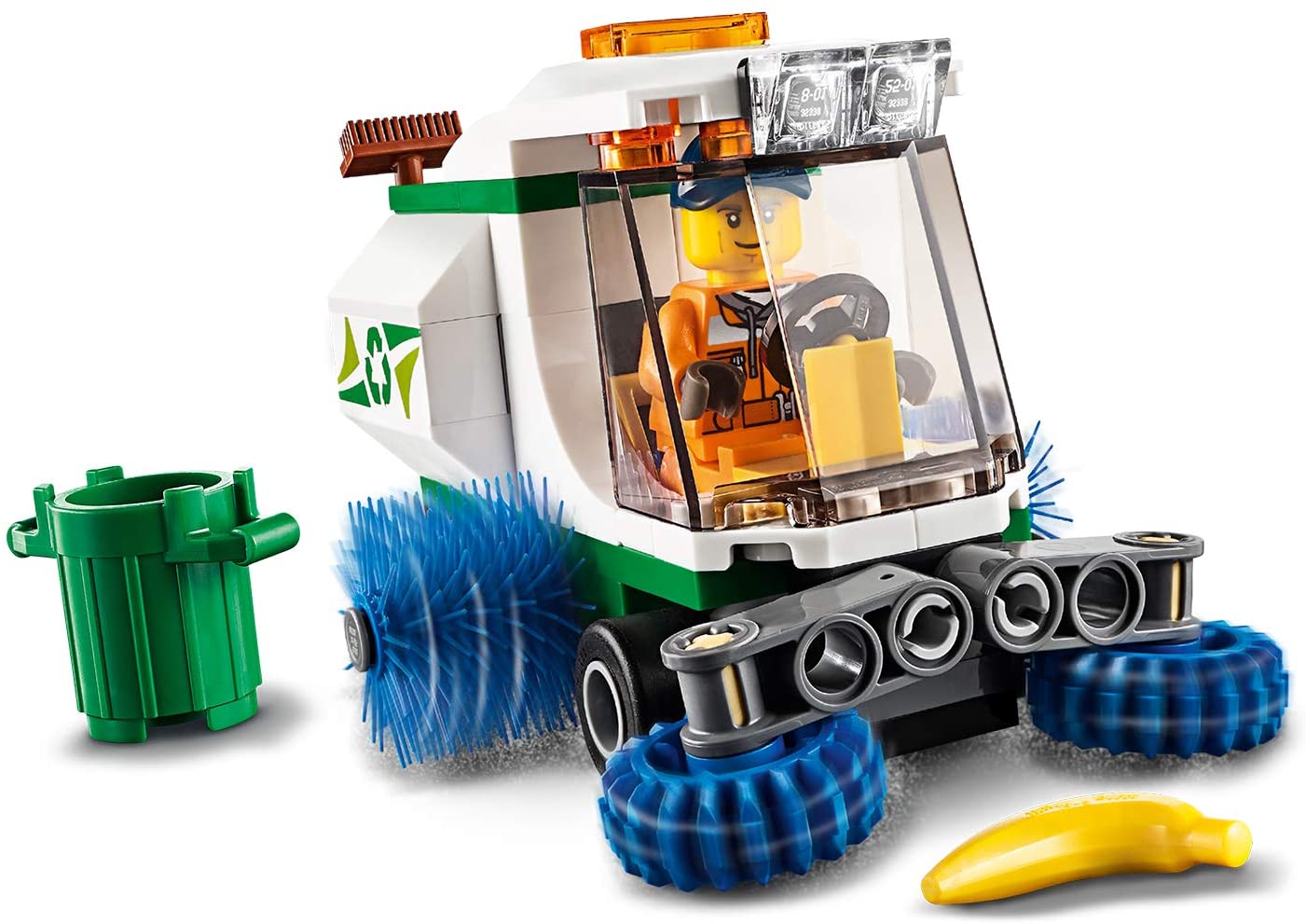 Small details can often go a long way towards adding to the authenticity of a LEGO city setup – and that is where builds like the Street Sweeper really come into their own, providing a fun, smaller-scale build which can really help to bring a build to life. The cleaning elements in blue here will be a lot of fun for younger fans, and the smaller build with this set means it can be fitted into most areas of a LEGO City display with relatively little modification needed. Combine this with the fact that you have a small assortment of minifigure accessories, combined with the street worker, and you have a fantastic little set which brings a unique flavour to the LEGO City assortment.

Is this a set which you picked up when it was more readily available? If so, let us know what you think of it in the comments down below! 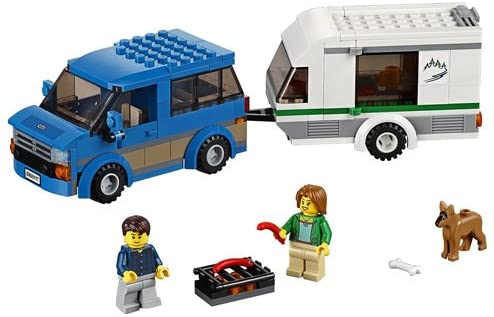 The last set I wanted to look at in today’s article is another one of the larger builds from the Great Vehicles line – which incorporates a couple of fantastic details into a really fun build. I like the colour scheme chose for the Van here, and also like the dimensions of this vehicle as it has some great internal dimensions which provide plenty of space for minifigures and other accessories. The colour scheme on this model is really nice, as I mentioned, as it is a colour which we don’t often see for civilian vehicles – so it helps to add a nice and unique vehicle to the LEGO City assortment.

I also appreciate the Caravan which is included here, as although there isn’t a ton of detail packed into it, it is, again, something which we don’t see often within the LEGO City assortment, and so it has some great value in terms of adding even more diversity to the vehicles in our LEGO City displays. This is another example of a set in the Great Vehicles line which I feel combines a nice aesthetic with some great playability, so I feel this is a set which is likely to be popular with young fans as well as with AFOLs. 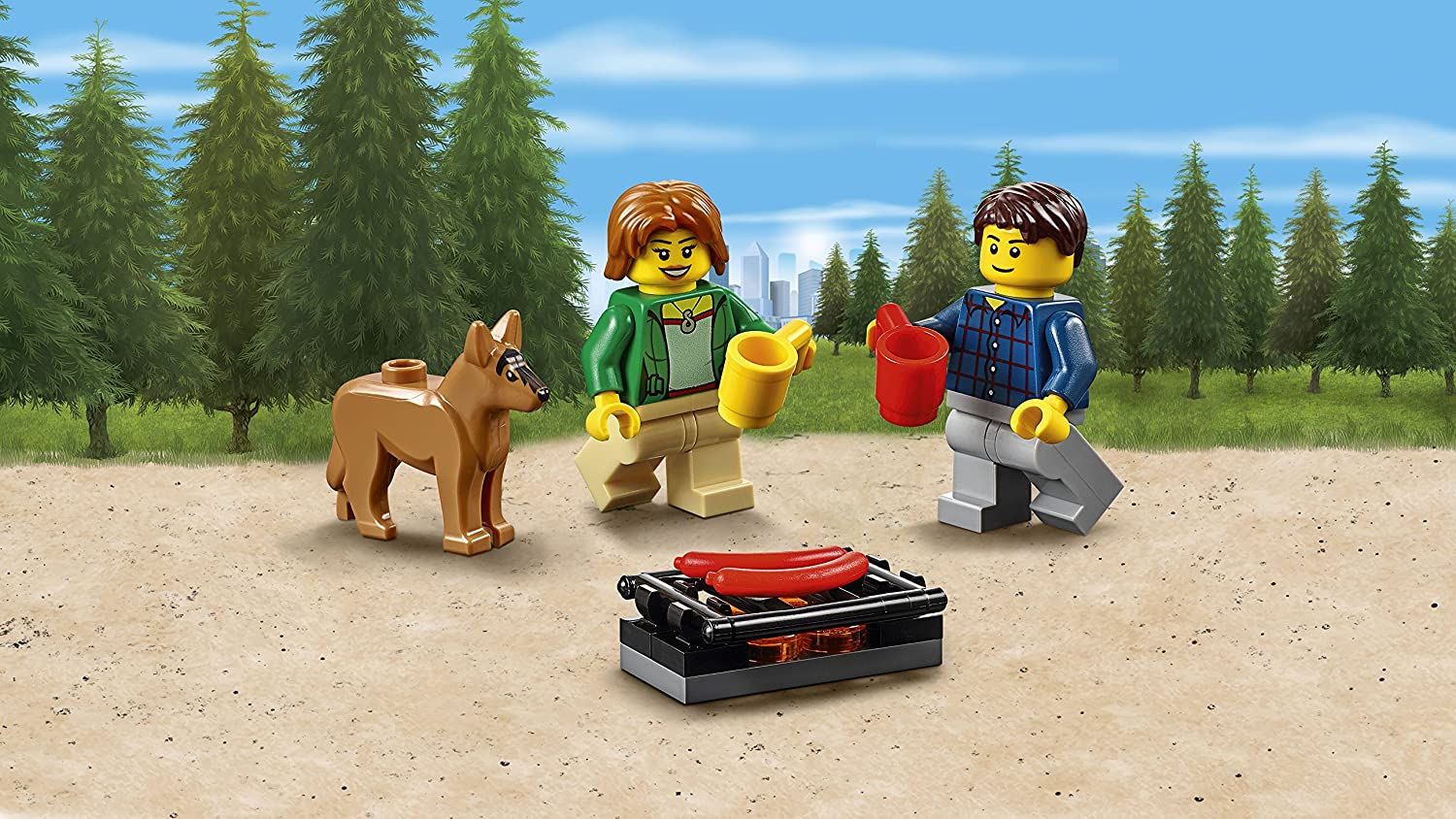 So, that has been it for our look at the Great Vehicles line! Whilst I don’t own many of these vehicles, I love the details added to the sets in the assortment, and I also appreciate the level of diversity and variety which we continue to see within the line.

Have you been collecting the Great Vehicles line? If so, let us know what you think in the comments below! And, make sure to check out the rest of my posts by clicking here.