Being a collector, I get asked this question a lot: “What was your first LEGO set?”. Honestly for me it brings back fond memories. Most LEGO sets tend to come and go but I always remember the first one. Regardless of what kind of collector you are, you probably do, too.

For me it came Christmas morning 1968! Living in Belfast at the time, I was 6 years old when my first LEGO set arrived. It was Lego 070-1 Universal Build Set (1966-7)  and believe me, I had to look this set up it is so old! One of the few box sets to come with trees, flags, windows, wheels and TV ariels, it included a heap of LEGO bricks and LEGO plates. Basically everything you ever wanted and Christmas morning was never going to be the same!

I can remember thinking “this thing is taller than me!” as the box stood on end. That set was all I played with for days. As a double layered set, it included grey plastic sort trays. However, I don’t remember any instructions and it had no LEGO Minifigures. I don’t even think they’d been designed yet! LEGO became one of the few toys I could really take to, and I had great fun for many years. Although not a LEGO Minifigure was in sight, cereal toys like “Crater Critters from Sugar Smacks” came in handy! 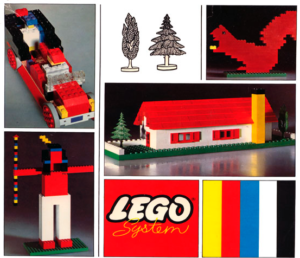 I  built many things in those first few years: pirate ships, castles, forts, and even the Jupiter 2 from “Lost in Space”, though mine wasn’t exactly saucer shaped. A few Christmases passed before I received another set as LEGO, even in those days, was very expensive. Unlike today, you didn’t always get what you wanted. Many years later, I could start buying LEGO for myself, but I never forgot my first set!

It got me thinking: I often wonder if LEGO missed something from those early years given what it offers these days? Boxes seem to be very cluttered by what is now “flavour of the month” and limited too as what you can build. The basic sets are just that: basic (and no trays?).

It’s only with the recent introduction of the LEGO Ideas sets that kids are starting to build non-LEGO related sets which finally gets LEGO back to its roots: “you are only limited by your imagination.”

LEGO Podcasts You Should Be Listening To