LEGO has been around for quite a while, and so has Goth music. But has Goth LEGO ever existed? In this article, I’m having a look at how LEGO embraced this subculture; possibly without even realising it.

So, what is Goth music?

In 1967, the music critic John Stickney used the term “Gothic rock” to describe the band The Doors. Jump forward to the 1970’s and the term was used again, this time to describe the music of Siouxsie and the Banshees. This was pretty much the start of the Goth rock movement, with bands like The Cure, Bauhaus, Joy Division and The Damned embracing this new form of music and whilst it is generally considered that the “golden age” of Goth was in the 1980’s the music, fashion and style still endures today.

Right about now, you may be asking “what’s this got to do with LEGO?”; which is not exactly an unreasonable question given that Batman (in the LEGO Movie) was more of a Death Metal fan and of course who could possibly forget the ever-so-catchy “Everything is Awesome” song (which I had just got out of my head until then…) LEGO is a very creative medium and whilst the subject matter of Goth music may have been less than upbeat, the fashion and the art was and is very creatively stunning in my opinion.

Being a primarily a children’s toy (sorry AFOLs) the focus of LEGO has always been towards the more fun elements; from 1958 the colour palette included black, red, white, blue, yellow and transparent. Around 2004 LEGO changed its colour standards and the Goth LEGO colours of dark grey, dark bluish grey and light grey appeared. This focus on family-friendly fun also continued through to the minifigures, with the first glow-in-the-dark ghost appeared in 1990 and the first witch appeared in the “Fright Knights” theme in 1997.

But with franchise tie-ins brought opportunity and Harry Potter made a start at bringing the gothic into LEGO with the Harry Potter 2001 Hogwarts Castle (set 4709) to which the Batman series then added to in 2006 set The Arkham Asylum (7785). I mention these two sets as they were the first ones that I could find that had gothic architecture. This building style was developed with two further versions of the Asylum; first in 2013 with the impressive Batman Arkham Asylum Breakout (set 10937), but also in 2017, which in my opinion had been heavily sanitised and simplified. The Hogwarts Castle, though, has grown and grown with sets in 2004, 2007 and 2018 (sets 4757, 5378 and 71043 respectively).

As well as the music, Goth is also influenced by classic books such as the works of Edgar Allen Poe (especially the poem “Nevermore”) and Bram Stoker’s “Dracula”; a novel that featured the Whitby Abbey, possibly one reason why the Whitby Goth weekend has been held in the town of Whitby since 1994.

In 2012 though Goth LEGO stepped into the limelight with the release of the theme Monster Fighters and introduced to the world the characters of Major Quentin Steele, Doctor Rodney Rathbone, Ann Lee and Frank Rock. Whilst Frank Rock seemed to be chiselled from the same material as Johnny Thunder (but without the hat), Lee, Steele and Rathbone did bring some Edwardian/Victorian looks with them.

Their enemies were of course drawn from the classic horror films such as The Swamp Creature, The Mummy, the Zombie and The Werewolf; but also, and importantly from a Goth perspective, Lord Vampyre (undead! Undead!). This Lord also brought with him two LEGO sets that made every Goth “squee” (obviously in a sad way) The Vampyre Hearse (set 9464) and the Vampyre Castle (set 9468). The theme itself also brought the Haunted House (set 10228) which had a very striking similarity to the house that Elivria, Mistress of the Dark was bequeathed in the 1988 film of the same name!

What I thought was cool with the hearse, apart from the oversized engine at the front and the red drapes at the rear where the coffin sits, was the flaming skull over the lowered driver roof panel. Seven years later mine is still glowing strong at night!

In 2015 the theme Scooby Doo unearthed some more gothic architecture in its Mystery Mansion (set 75904) and would have got away with it if it wasn’t for those meddling kids with their Everything is Awesome paint palette, using a very bright purple that positively cheered the place up!

Typing Goth LEGO into Chrome produces some interesting results, but mainly one character, Spooky Girl, comes up repeatedly. Released in 2014 as part of the Collectible Minifigure Series 12, she is pretty much the poster child for all things Goth.

Fortunately, though, she wasn’t left to be on her own as in 2016 Series 16 brought us Spooky Boy which would have been a great Goth companion if it wasn’t for those scamps at LEGO HQ making him just a little vampiresque giving him a single canine pointy tooth!

Just for completion here, Series 2 of the CMF saw the Vampire figure himself.

As I mentioned before, both LEGO and Goth inspire the creative and using some LEGO parts that I had in my collection, but also by sourcing some custom parts and pieces, I managed to create my own Goth figures that I’d like to present to you.

First is my very typical Goth. Leaning heavily on the Victorian aesthetic, with his Matrix style long coat and dark glasses (that are worn even at night), his very sharp haircut and of course his black platform boots. This man can remember sneaking into the Blitz Club to hear Kraftwerk played for the first time and even now will head to the clubs for the new electronic sounds. 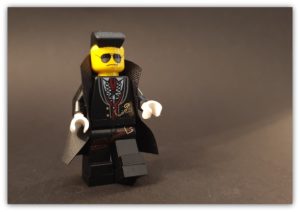 Robert Smith of The Cure

The next figure I created was my homage to Robert Smith of the Cure. The hairpiece was something that I coloured from its original purple. This was one of the first custom figures I ever made which I had not just used the parts as bought. Interestingly, as well as being the lead for The Cure, he was also the drummer for Siouxsie and the Banshees from 1982-1984. For one tour when the Banshees drummer quit, he played with the support band (Cure) as well as the Banshees so the tour would not have to be cancelled! 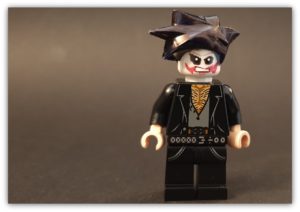 My final custom figure was in homage to Emily the Strange. Originally designed by Rob Reger in 1991 as an advertising mascot, several graphic novels and novellas have been produced since 2001 featuring Emily and her four cats. The character of Emily was put under scrutiny after she was likened to another character called Rosamond. 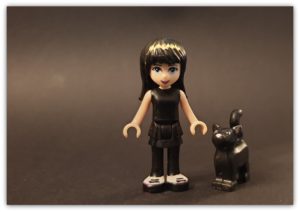 As it was, it was agreed that both artists had been drawn from a similar style. The challenge for me with this figure was she was painted using marker pens rather than brush or spray. Getting the shoes right, plus the white reflective line above the fringe (or bangs) was difficult; but I was pleased with the result.

I wanted to write an article looking at whether the Goth culture has influence LEGO and possibly created Goth LEGO whilst trying to avoid the references to Halloween, spooks and ghouls. Whilst it isn’t totally possible, spotting where the gothic influence lies was an interesting and fun piece of research.

I almost forgot one last connection to LEGO and Goth; that is of course the character of Jack Skellington from the 1993 film The Nightmare Before Christmas. The character of Jack has been appropriated by Goth fans for its very gothic nature and design; his creator, Tim Burton, is well-recognised for his gothic design and imagery; Burton in turn has made it clear that he was influenced by the music of the Cure! 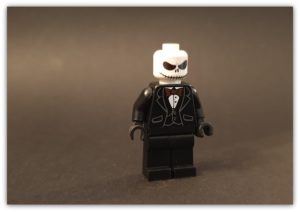