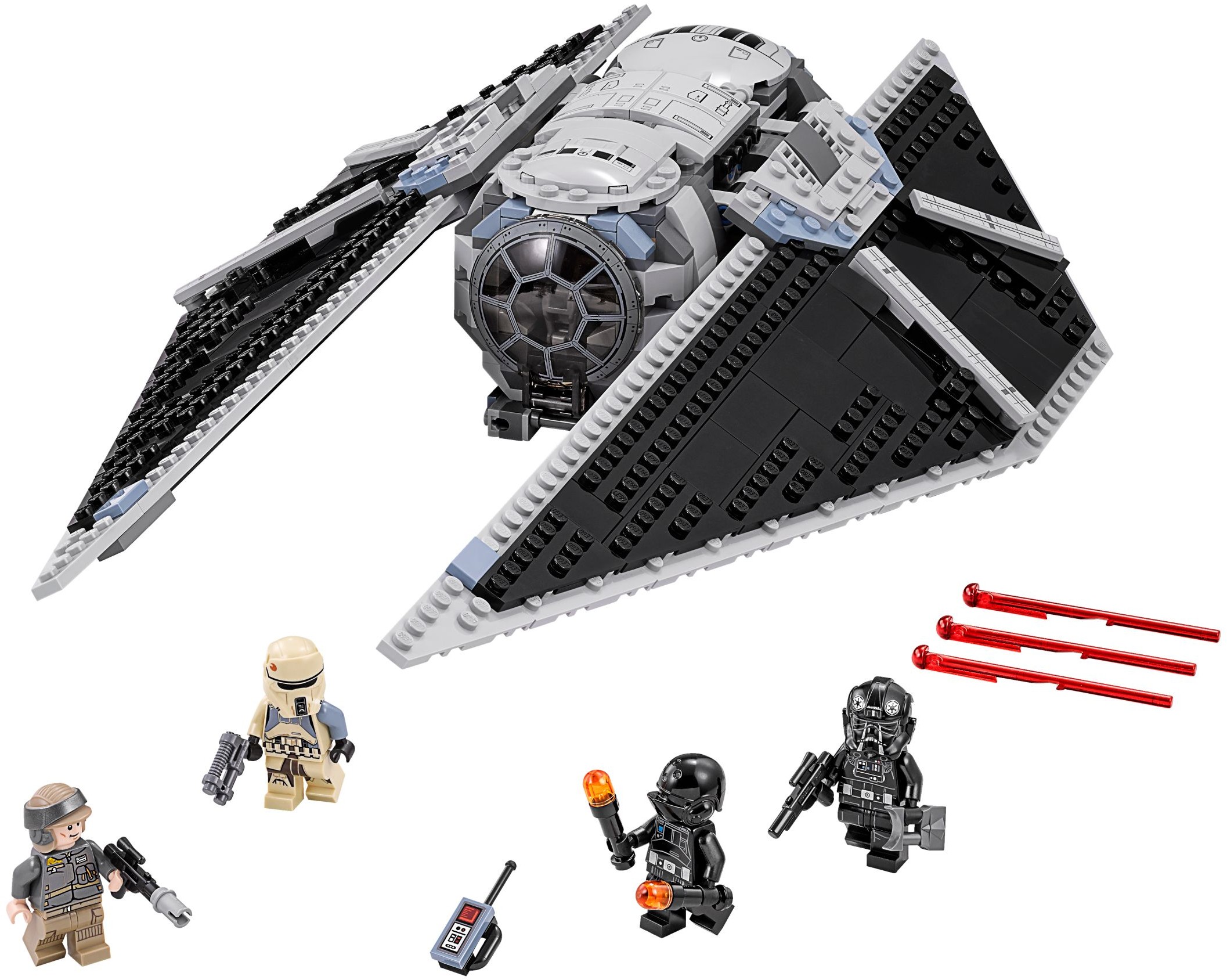 As I previously reviewed the 75155 Rebel U-wing Fighter, it is only right to review the equally iconic Imperial ship, LEGO 75154 TIE Striker, to go alongside it. This set perfectly captures the appearance of the onscreen ship we see in Rogue One. Much like the U-wing the TIE striker manages to take inspiration from vehicles in the Original Trilogy and reimagine them in new ways. This combination of shapes is so different to the regular TIE variants and is actually one of my favourite ships in the TIE family, tied (no pun intended) with the TIE Defender.  The elongated cockpit section is similar to the TIE Bomber and the wings are like those of the TIE Interceptors, albeit larger and only 1 half of the Interceptors wings, but the pointed shaping is definitely reminiscent.

The TIE Striker is a more streamlined version of the TIE line starfighters used by the Empire. They appear most notably during the Battle of Scarif in Rogue One, but they have had brief roles in other forms of media such as games and books. Tie Strikers are specialized for in-atmosphere missions, rather than its regular counterpart which was made for space combat. Some of the most poignant features of the TIE Striker are its pair of sleek horizontal wings and large central pod. The wings move and can be set to flight mode or attack mode, this feature is present in the set. In addition to the improved speed, the large wings improved the ships VTOL (Vertical Take-off and Landing) capacities.

I will start with some information about the set then begin the review.

I’ll give my thoughts on the minifigures then move onto the build itself.

First, we have the TIE Fighter pilot. This figure has a great design and adds some variety to the regular TIE pilot design. The body and legs feature the jumpsuit worn by TIE pilots with the life-support rebreather pack attached to the torso with the tubes printed on. The under suit can be seen between this section and the belt area, which has some reflective silver detailing. This under suit continues down onto the leg design with the seam lines and pockets printed in a lighter grey colour. These designs are pretty standard for TIE Pilot figures and change minimally between the different versions. The face underneath is the notorious ‘angry Clone’ head but that’s not really important here because the pilot should always be wearing the helmet. 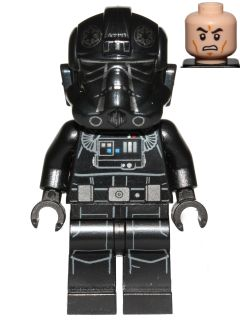 The main difference here with this figure is the helmet print. This helmet mould has been used since 2009 with the AT-AT pilot and reused for TIE pilots, given the similar design. The print looks great and has the imperial cog insignias on the top section printed in the same reflective silver as the belt. There are some small symbols on the raised fin section also in silver, and underneath there are 2 lines that run down the ‘nose’ section, which adds some character to the pilot. Just under this on the chin are the 2 tube connectors which hook up to the life-support pack on his chest. He appears in 2 other sets so he’s not exclusive but still a good figure to have. 9/10

The next figure is also a nice addition to an Imperial army collection, the Imperial Ground Crew. This design first appeared in Rogue One and essentially guides the cargo shuttles we see in the film to the landing pad with some light batons. Whilst not having a particularly interesting job, the costume of the character is the complete opposite. The design on the chest is similar to the TIE pilot, with the belt detailing but the upper torso has some light armour with a few lights on it. The back has the space where the light batons go which is a good inclusion, despite the fact they don’t actually fit. The legs have a jumpsuit look about them, with some knee pads further down the legs. These are decently detailed and accurate to the real costume we see in the film. 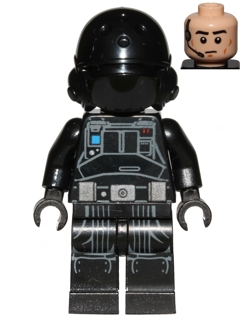 The head features a commlink headset which is appropriate as he’d need to communicate with Air traffic control when guiding the ships on Scarif. The best part about this character though, is the helmet mould. There are clearly inspirations from the Death Star Gunner helmet design with the protruding mouth guard area and narrow visor. There are some ear defender type headset pieces over where the ears would be on the minifigure, and the top has some holes on the forehead section. Overall, this figure is well executed and it’s a good inclusion to the set. 9/10

This next figure is by far one of my favourites in my Imperial collection, the Shoretrooper Captain. This trooper has the same helmet as the other Shoretroopers in the Rogue One sets. The mould is good and captures the appearance of the onscreen helmet. The level of detail that LEGO were able to put into the helmet print, particularly the mouth area is impressive. The head is the same ‘angry Clone’ again, but this can be forgiven due to the torso and leg prints. The prints are highly detailed, and the colours add a welcome variant to the regular Stormtroopers. The sand blue highlights contrast well with the light tan armour and reddish brown under suit. The asymmetrical sand blue arm is a nice touch and represents the different coloured armour on his arm. 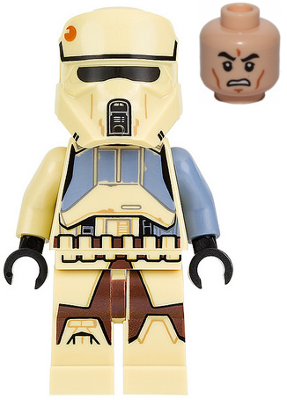 The Shoretrooper is another design introduced in Rogue One, which some see as unnecessary but it’s such a good design and the LEGO version is superbly executed. He stands out amongst the ranks of regular Stormtroopers and looks great alongside the Shoretrooper Squad Leader. This is the only set this particular variant comes in. the exclusivity factor and overall design contribute to this figure’s desirability. 9/10

The final figure is the Rebel trooper. Despite not being named on the box, this minifigure is based on Arro Basteren, a Rebel Marine who was part of the unsanctioned strike team that infiltrated Scarif to retrieve the Death Star plans. He has a dark tan and gunmetal grey commando helmet, first used for the Endor commando minifigures. He has the same yellow insignia on the helmet as Eskro Casrich from the 75155 U-wing as well as the same legs. The dark tan legs have reddish brown details and pockets near the top, he also has a dark tan belt print. 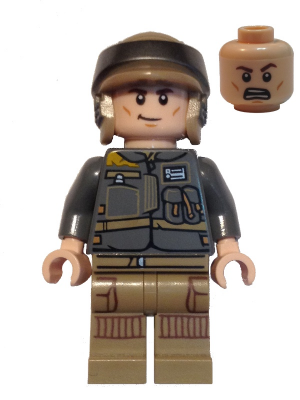 The torso print is similar to one of the torsos in the 75164 Rebel Trooper Battlepack, however he has dark grey arms rather than the tan arms in the Battlepack. The head is reused from the 2016 wave of Marvel sets where it was used for unmasked Captain America. The head has 2 good expressions: happy and angry, which fit the character as we see him in the film. The figure resembles the character well and is a welcome addition to my Rogue One figure collection. 8/10

That’s the figures covered, now for the build.

The build is interesting to put together, it consists of a cross between regular LEGO system building and LEGO Technic building to make the wings move like the onscreen ship. It is a good replica of the ship seen in Rogue One and is quite sizeable compared to a minifigure. The build starts with the main pill shaped cockpit hull then you build up a Technic midsection for the wings to attach to. After completing the cockpit to 3/4, you then build the wings. These are great, the grey plates are sandwiched between the black plates to get the grey trim around the solar panel wings. Both wings are constructed in the same way, but the angles are inverted. The grey angled pieces have stickers on, but these add some additional details, so these are decent additions. 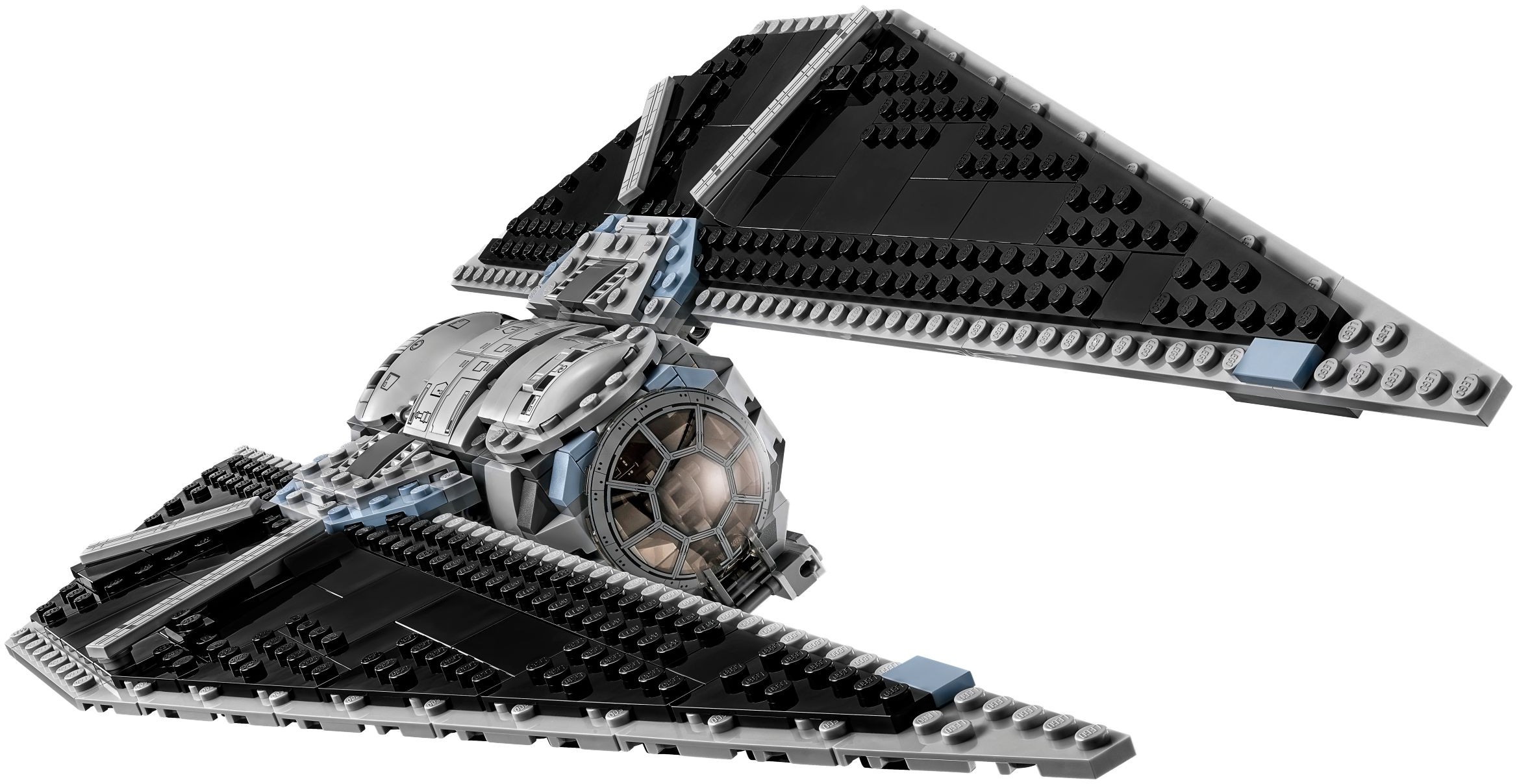 The wings are able to be posed up and down through the use of some levers which are operated at the back of the craft. There are sand blue highlights across the main hull and the wings. These add some colour to the craft and are a nod to the sand blue TIE models used in the Original Trilogy. The tops of the wings are relatively smooth, but they still have a few studs exposed. 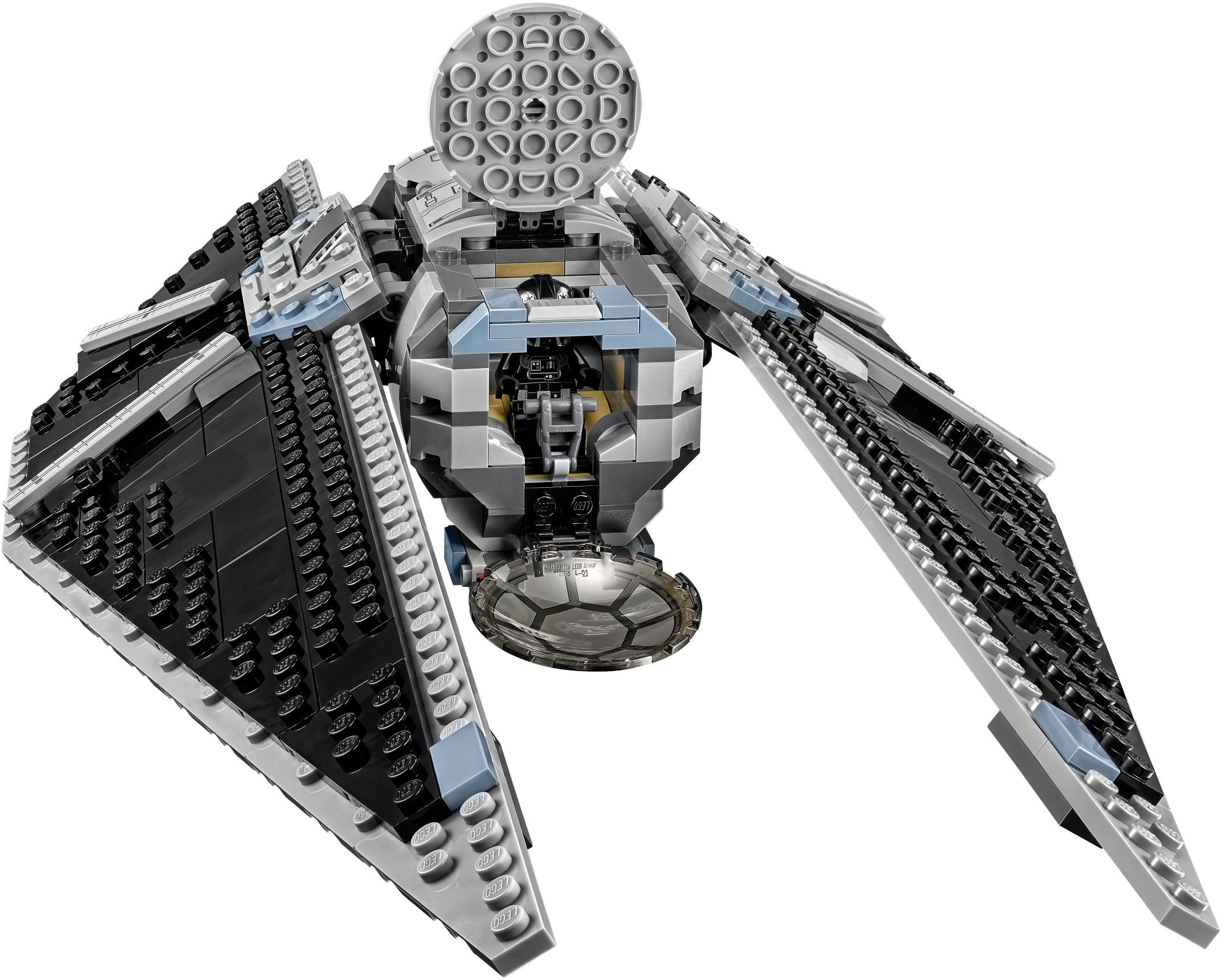 The cockpit hatch and windows both open up to allow you to place a pilot in the seat. The steering yoke is made using a dark grey droid body. The use of an ingot piece in light bluish grey was a good idea as it makes a small gap for you to open the hatches with ease. 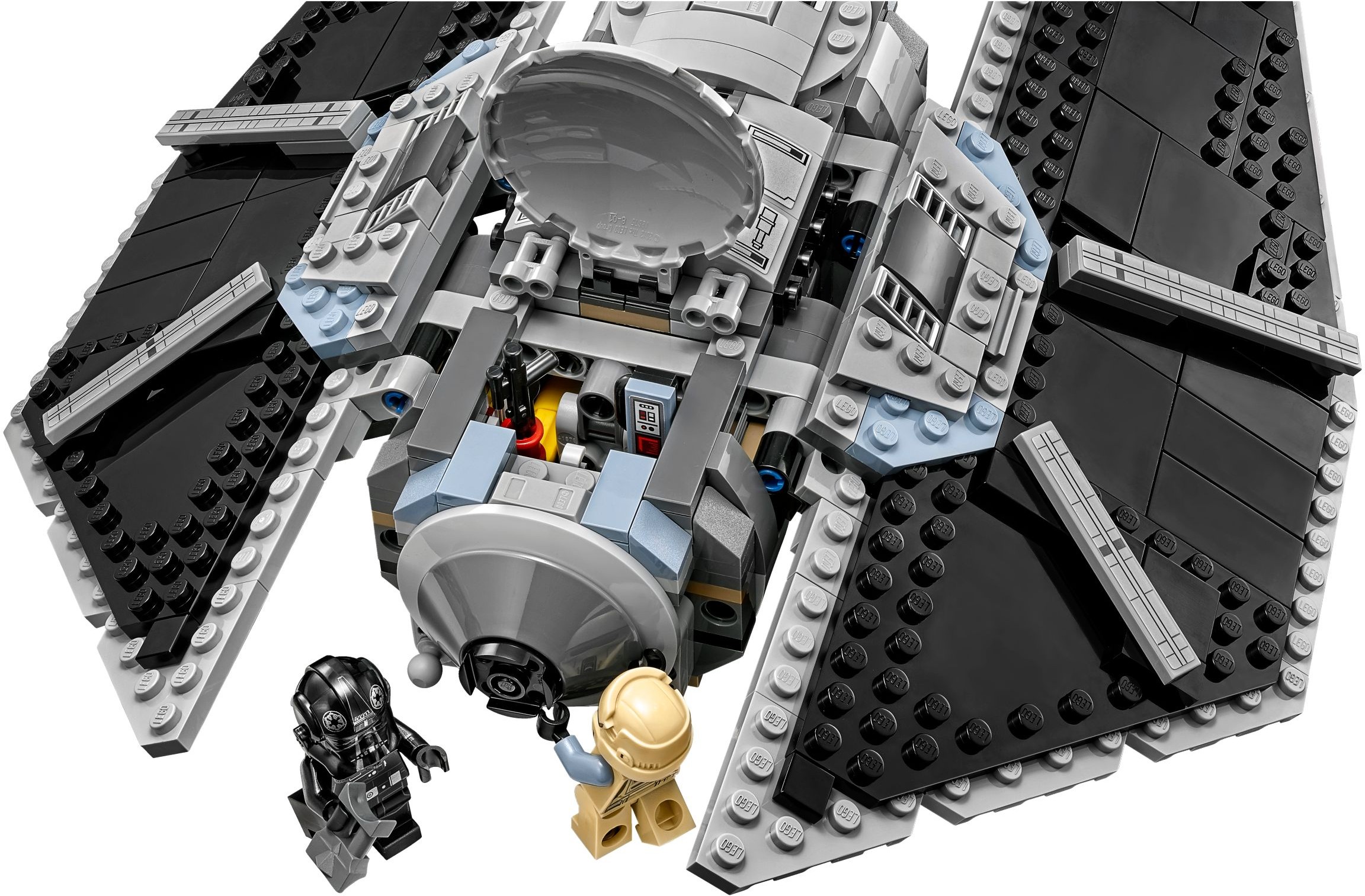 The in-universe ship has a larger cockpit than the regular TIE Fighters and can transport things. This area is taken up largely with Technic, however there is a section at the very back of the craft which can be opened and holds some accessories.

There is enough space to hold a blaster, a walkie talkie, and some binoculars. The walkie talkie has a great design on it which is achieved through a sticker on a sand blue 1×2 tile. This rear cockpit hatch is printed like the window canopy; however, the front hatch uses a sticker to get the detail. The middle area has 4 stickers on some curved pieces to get the top detailing. This level of detail couldn’t be matched with bricks, so the use of stickers is fine. There are also a couple of light bluish-grey binoculars used at the back here to add some greeble detailing, near the hatch. Under the wings, near the back, there are a couple of telephone pieces, 1 on each side of the hull, adding some pipe detailing.

This set is a great first attempt at a TIE Striker. The build is quite impressive, and the process of construction is fun, the minifigure selection is perfect but I would have liked to have seen another minifigure like a Death trooper or plain Shoretrooper to justify the high price. The build is definitely worth the money; it just would’ve been nice to get another trooper. Overall, I like the set and I’m glad to have finally added it to my collection. 9/10