After previously reviewing the LEGO 75288 AT-AT, I thought I would go back and review 75259 the 20th anniversary Snowspeeder set. The set compliments the AT-AT incredibly well and looks great alongside it. Like the AT-AT this set is based on the iconic scene in “Episode V The Empire Strikes Back” where the Rebels fight off an Imperial ground assault on the Ice Planet Hoth. As LEGO Star Wars fans will know, the Snowspeeder is up there with Luke’s Landspeeder or the Millennium Falcon in terms of how many remakes it has had.

The Snowspeeder has been a staple of LEGO Star Wars ever since the theme’s origins in 1999, but this version of the craft is probably the best one we have received from LEGO so far, without including the UCS models. This set was released in 2019 to mark the 20th Anniversary of the LEGO Star Wars theme. Like the other sets within this special wave of sets it included a collectible “retro” stylized minifigure, based on the designs of one of the earlier minifigures. The collectible extra figure in this set was Lando Calrissian.

In-universe the Snowspeeder is actually a modified T-47 Airspeeder, adapted to the cold climate by the Rebel alliance, to operate on Hoth. We see Rogue squadron use these crafts on Hoth in both the films and videogames, to defend the Rebel base and buy time for the alliance to retreat off world. The airspeeders were developed to transport cargo originally in-universe, hence the tow cables, which ultimately led to the Rebels being able to topple the Imperial AT-AT’s. The small craft could fit 1 pilot and 1 gunner inside and operated in atmosphere rather than other craft which could operate in space combat too.

LEGO 75259 set also comes with a 1.4 FD P-Tower which we see in the film which the Rebels use as defensive turrets. These cannons could rotate 360O and fired beams of energy from the centre barrel. They could destroy AT-ST walkers with ease, but the AT-ATs tough armour proved too strong for the cannons to breach.

I will start as usual with some information about the set then begin the review.

The first minifigure is Pilot Luke Skywalker. This minifigure is the same as the one included in the AT-AT and the 4+ X-wing set. The pilot’s torso and legs are really well detailed and have the flight vest and control box on the front leading into the legs. The legs have the pockets and straps on them and look good. As I mentioned in the AT-AT review the pilot helmet is interestingly the older style rather than the 2018 dual moulded one which only featured in 75218.

I much prefer the older style used here as the 2018 one is simply too large compared to a minifigure. The head print features the chin straps and goggles we see Rebel pilots wear but this is clearly Luke rather than a generic pilot. On the other side of the head, the visor has been flipped up and Luke has a smile on his face, perhaps for when he destroys the AT-AT. 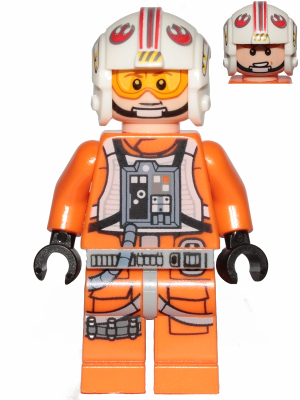 However, fans of the film will know that this figure, and the next one Dak Ralter have a few glaring inaccuracies. This figure is based on the X-wing jumpsuit from “Episode IV A New Hope” for some reason. The Episode V jumpsuit worn by Pilots on Hoth has a big puffy collar and white gloves. Also, the strap around their ankles should be on the other leg, and they should have brown belts on the chest area. I imagine these figures were included rather than accurate ones due to the cost element of new prints. Not exclusive and inaccurate but still a nice figure 7/10

The next figure is Dak Ralter, he is the gunner in Luke’s Snowspeeder. This figure does a decent job of capturing the look of Dak, but realistically it would’ve been nice to receive a specialised face print for Dak, especially since this is an Anniversary set. He has the generic pilot head, and the same torso and legs as Luke and his pilot helmet has the Rebel alliance insignia in blue. The head prints do work for Dak, despite being generic, the first face print is smiling, like when he tells Luke “Right now I feel like I could take on the whole Empire myself”.

The reverse head features a worried expression, much like the one he has when the gunner controls explode leading to the pilot’s demise. I would have liked an accurate set of prints for both Dak and Luke however these figures work well enough. Generic and inaccurate prints but still a necessary figure to go with Luke 6/10 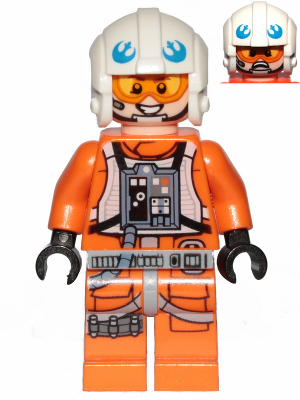 The third figure is a Hoth Rebel trooper to man the turret side build. This figure is in the same style as the other 2019 Hoth Rebels featured in the action battle playsets.  The trooper has a nice torso print with the big cold climate overcoat printed on. He has some belt detailing and a pouch on the lower section of the torso, on his left-hand side he has a rank badge and on his right some silver detailing. He has some dark tan legs and a dark tan cap with the goggles folded up over the brim of the cap. These work well but the white cap may be more accurate, but I imagine they used the dark tan cap to keep the colour scheme/motif.

The face print is a generic male with cheekbones and a slight smile, nothing too special but the generic nature of these 2019 Rebels means you can army build them for Hoth scenes. He also has a white backpack piece, which this particular trooper has had since its first version in 1999. This set is a direct remake of the 1999 set as it features the turret and this Rebel trooper. The legs are a little plain but overall, this is a decent representation of a Hoth Rebel. 7/10 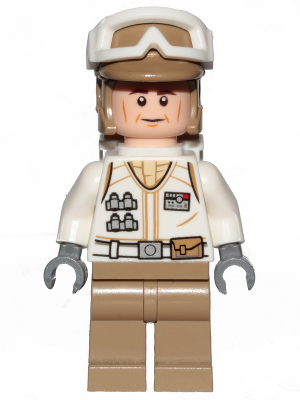 The final minifigure of the set is the 20th Anniversary collectible 2003 Lando Calrissian remake. This figure is great and is almost an exact replica of the 2003 figure. The figure has the classic style eyes, without the pupils, and the old hair piece just like the original. The legs are plain black like the original which doesn’t bother me as this is for authenticity. The cape is yellow on the inside and light blue on the outside, this is also like the original. The torso print features Lando’s outfit he wears in Episode V as the Baron Administrator of Cloud city.

The details match to the classic 2003 original, however, to make sure people didn’t attempt to pass off any of these remakes as the original, or cause the originals to lose value, LEGO printed a silver 20th Anniversary logo on the back of the torso. This was a good move by LEGO as the minifigure resale market is very lucrative, especially for Lando, as the variant this replica is based on only appears in the 2003 Cloud City and is very expensive nowadays. The print on the back is fine as the cape covers it so it doesn’t detract from the figure if you want to use him in MOCs rather than display. 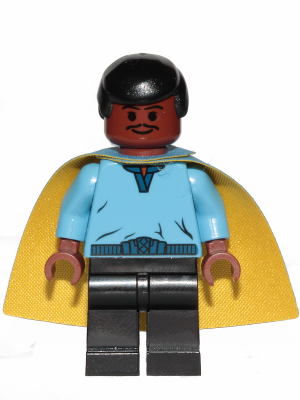 I really like this figure and it’s a great chance to get this version of Lando for a fraction of the price of the original, without causing the original to lose value. A good representation of both an iconic character and figure which a lot of fans want, and he even has the old-style megaphone blaster from the early sets. 9/10

That’s the figures out of the way now onto the build.

The whole turret is built on a rotating base and has some interesting SNOT techniques used to get the shape right. The dish section can rotate up and down so you can angle it in a variety of ways. There is a stud shooter on the barrel section so you can make the turret fire to defend the base. This is an ok feature, but I removed it on mine as I wanted it to look as accurate as possible. There’s also a pair of binoculars for the Rebel to use to spot any incoming Imperial threats. These are good inclusions to the set; the Turret adds more play scenarios and is nice for collectors who want the set as it is a remake of the 1999 set. The stand is good too because it gives you somewhere to keep the collectable Lando figure rather than just having him loose.

The Snowspeeder is reasonably well sized and is probably the closest to minifig scale without compromising the integrity of the model and ease of construction for younger fans. The whole cockpit section lifts up with ease so you can fit both figures in without any obstruction. The large canopy section is printed however the back window has stickers applied to add the right design.

The controls at the front are on a printed 1×2 cheese slope and look good. The majority of the details however are obtained through stickers. I don’t mind them here as they add a lot of the detail which would be too hard to construct through bricks and too expensive to print. This set changes the classic colour scheme of white and orange to a mainly white and grey construction and has the orange brought in through highlights in the stickers. 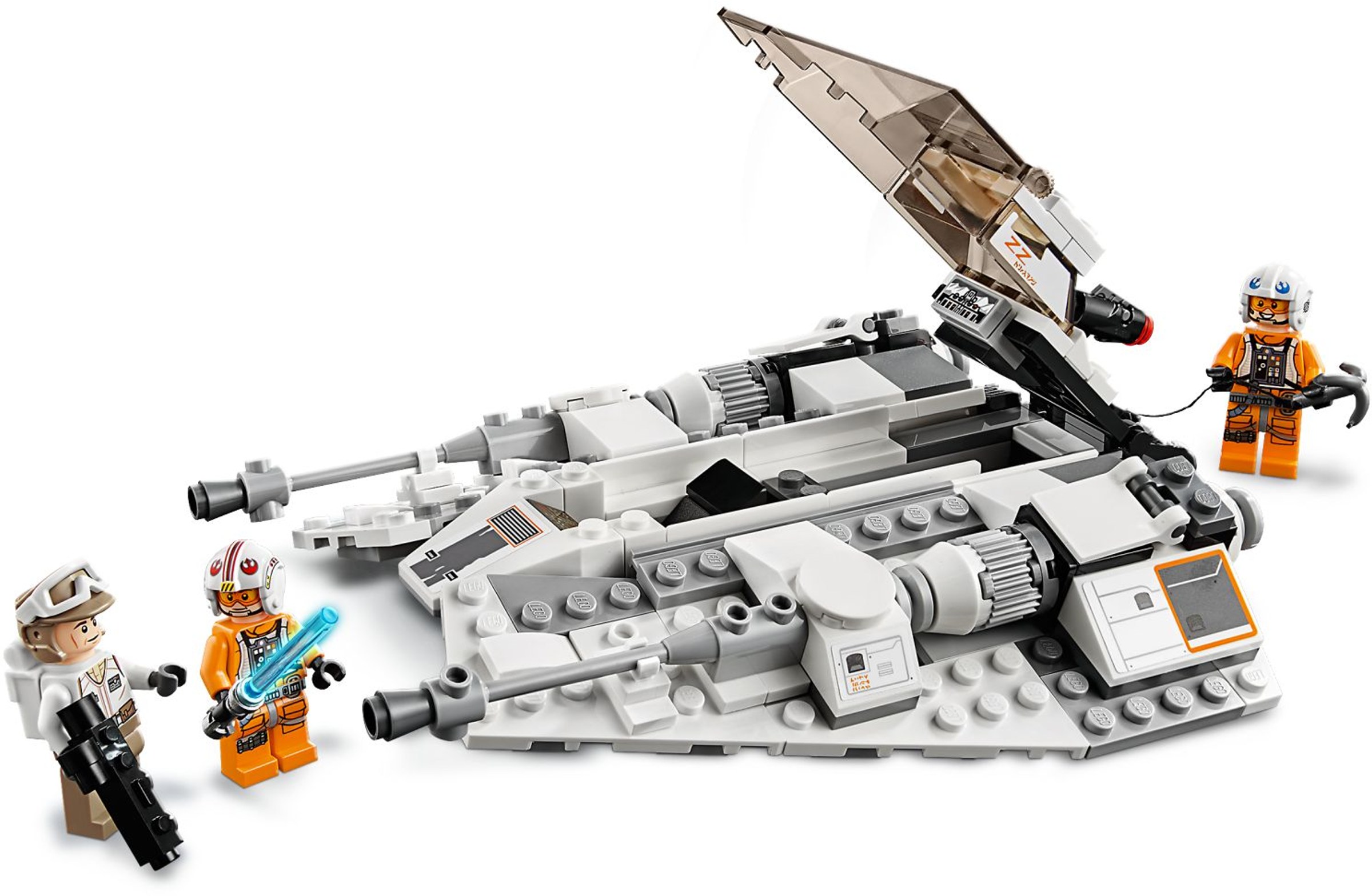 The cannons are constructed in a similar way to the 75204 Sandspeeder from 2017. The brake flaps have some extra engine detailing on stickers underneath. The ‘wings’ are attached by hinged plates, rather that technic angled beams which were used to attach the ‘wings’ on 75204. The viewport screen is a sticker and has some nice detailing to show the gunner controls and tow cable, with Hoth in the background. Under this console, is a space to put the pilots’ blasters and can be accessed when the canopy is opened.

This Snowspeeder has a few play features. There are 2 spring loaded shooters under the 2 ‘wing’ sections which you can use to shoot the standard red bolt elements from. The tow cable cannon has been replaced by a stud shooter and you can use this to shoot at Imperials or the AT-AT if you have it. Finally, there’s also the grapple hook under the stud shooter on the back which you can unwind and use against AT-ST’s or the AT-AT. If these play features aren’t your thing, you can remove them without harming the build. I removed them from mine and made my own tow cable launcher which is more accurate to the onscreen model seen in the film.

That’s all for the build so I’ll get onto my final thoughts now. I like the set as a whole but the pilot figures do let it down, you can’t really tell when they’re in the cockpit, but for minifigure completionist collectors this is frustrating as they are wrong. I would have preferred to see other pilots with this set rather than the 2 we were given as I feel like LEGO always uses Luke’s Snowspeeder and neglects the other pilots we see in the film. The Snowspeeder itself looks great particularly with other Hoth sets and the 2020 AT-AT and is the closest design to the Snowspeeder in the film. Overall, the build is good and the Lando makes up for the lack of care put into the pilots, so I rate the set 8/10. 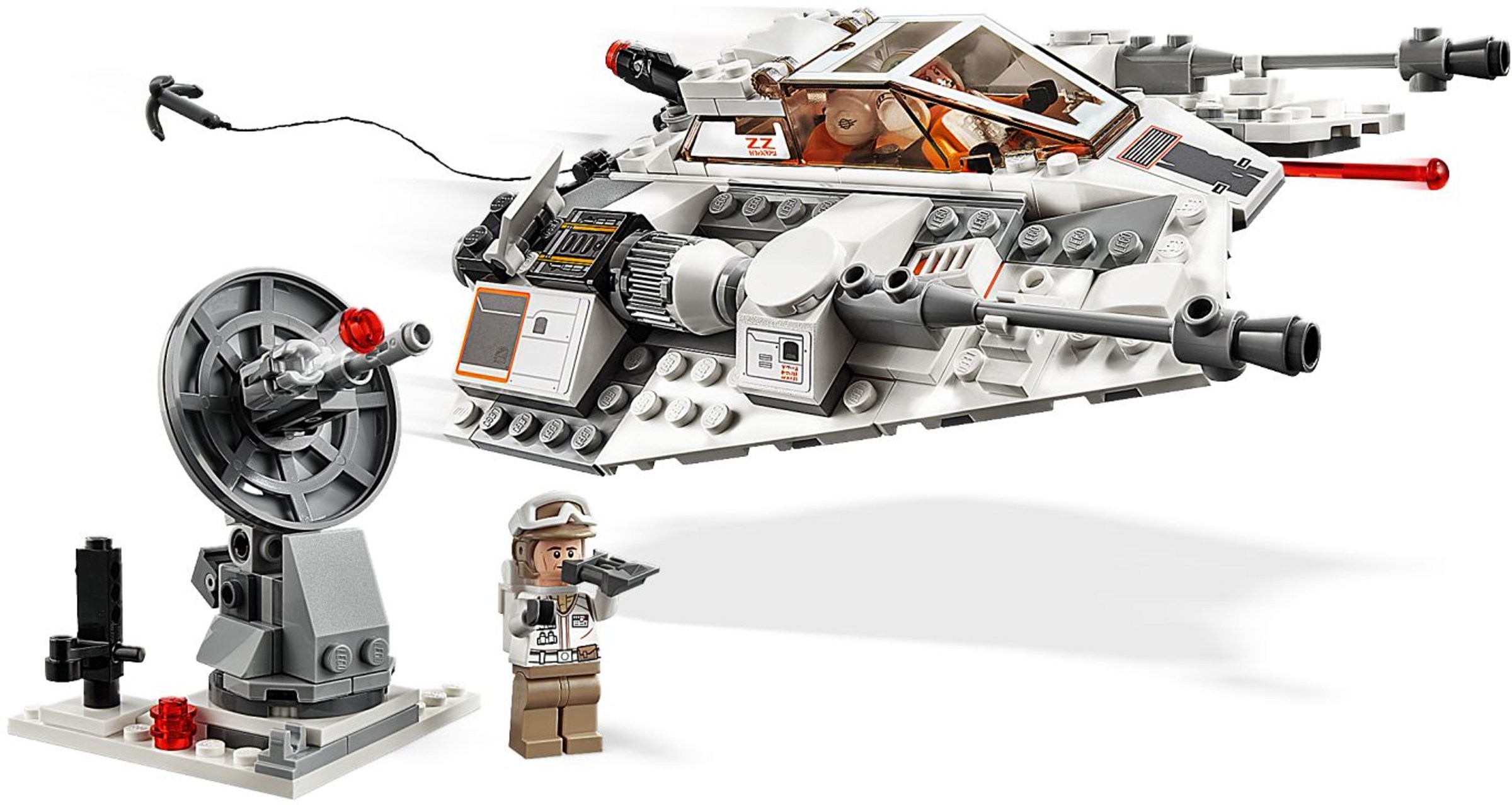