One Small Step For a Minifig…

It’s hard to believe it’s been 50 years since upright monkeys living on a small rock, orbiting an unremarkable star, on the outer edges of an inconsequential galaxy, invented the necessary technology to send three of their own to their planet’s natural satellite…and only 66 years after they’d discovered flight! It’s nuts really. But to celebrate this momentous event, LEGO released a new set, 10266 NASA Apollo 11 Lunar Lander, as Martin reported a few days ago. 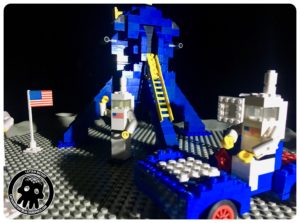 This isn’t the first time they’d produced a set representing the Lunar Module (aka, the LM – pronounced ‘lem’) – they had one as far back as 1975 with set 367, Moon Landing. A blue blocky rendition which I was lucky to have a copy of.

2003 marked the release of another version, 10029 Lunar Lander (done in association with the Discovery Channel), but 16 years of new parts and design skills lead us to this year’s creation.

As this set’s title states, its focus is on the Apollo 11 mission. This means that there are no vehicles, just the module and landing site, made up of 1,087 bricks. 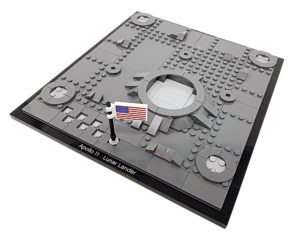 This looks very much like a display model, and as such, it comes with a base which is brick-built and represents a portion of the lunar surface. This is the first thing you construct and its build is actually more complicated than it looks made up of three layers of different coloured plates. The results are extremely satisfying, with craters of various sizes (four of which are designed for the LM’s landing pads to rest on), with a particular large one just off centre. It’s blocky, but it actually looks great.

My favourite part is the representation of the footsteps the astronauts made walking from the LM to where they erected the flag. It’s so simple, but it looks so good. 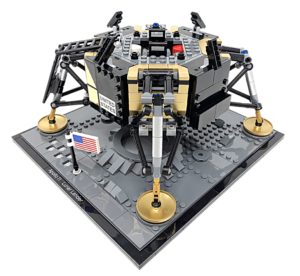 Next comes the construction of the Apollo 11 Lunar Lander’s Descent Stage. An octagonal structure is never an easy thing to create with LEGO bricks, but everything assembles without trouble for the most part. The hardest, trickiest and most fiddly moment is when you need to lower the landing pads and attach them to the side of the module. That alone definitely earns this set’s Expert rating (and likely a fair amount of frustration and perhaps even some swearing).

Yes, that was more fiddly than all the stickers you have to apply! I’m not really a fan of stickers myself, so this too proved a challenge and I must say that I was pretty disappointed to see that the flag is only one sided! This was definitely not what I was expecting. 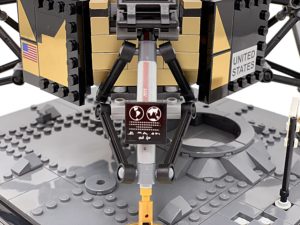 While we’re on the subject of stickers, the LM had a commemorative plaque, wrapped around one of the landing pads, just behind the ladder, bearing the words “Here men from the planet Earth first set foot upon the Moon, July 1969 A.D. We came in peace for all mankind”, along with the signatures of Neil Armstrong, Buzz Aldrin, Michael Collins, and U.S. President Richard Nixon. It’s black writing on a metallic surface, so obviously LEGO with their fine attention to detail made a sticker with silver writing on a black surface… 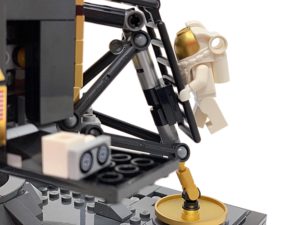 That nitpick aside, as construction of the Apollo 11 Lunar Lander’s Descent Stage continues, the detailing is most welcome. This includes a space for the fuel and oxidiser containers, a section where the camera was stored which would record Neil Armstrong taking those fateful steps down the LM’s ladder onto a new world, and there’s also room for a laser reflector, a device the astronauts left on the moon to help scientists back on Earth make extremely accurate measurements of the distance between the Earth and the Moon (a device that is still there today – take that, moon landing deniers).

You could tell this was a labour of love for the designers as the instruction booklet not only includes a few pages at the start explaining the whole mission and includes amazing photos, but you also get footnotes as you’re building, to explain what certain sections are.

Those who love new parts will be stoked by all the pieces in gold (not pearl gold which is more orangey, but much closer to actual gold colour).

The last part of the set is the Apollo 11 Lunar Lander’s Ascent Stage, the section that lifts off to bring the Neil and Buzz back to the Command Module (not included in the set) that was orbiting the moon, where Michael was waiting for them as he orbited the Moon.

I liked the way this was designed because you can easily remove the walls to see inside, and there’s even enough room to fit both astronauts – snuggly. Stickers are there to represent the various controls the crew needed to use to navigate and land the LM, and the outside it peppered with various antennas and control thrusters. It’s all very blocky, but if you look at the original, it too was pretty blocky.

Although it is more of a display set than a play one, there are a number of play features. We’ve already mentioned the camera, laser reflector and removable walls of the Ascent Stage, but you can also detach both sections as the original was designed to. As it’s minifig sized, it appropriately comes with two minifigures, allowing you to have a few lunar adventures of your own. 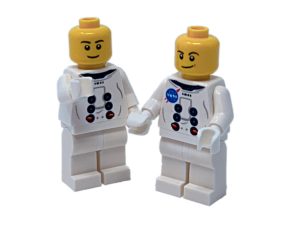 However, the minifigs are probably the most disappointing part of this set. First the good: the front torso is pretty realistic and looks very similar to how the astronauts’ actual spacesuit looked like… and that’s about it, I’m afraid.

The piece used for the air tanks is one LEGO’s used for years. It looks good (heck, I use it myself in my own creation), but when you put it on, it hides most of the torso’s print. Worse still, you can’t really display the team without that piece as the astronauts’ heads are just generic yellow ones. Plus, no hair pieces were included. There’s really no way to showcase that front torso without modifying those minifigs. What a shame.

A puzzling error are the gloves: the actual ones – at least for the Apollo 11 crew – were grey, but LEGO have given them white ones… it just feels off.

Worse still, the suits had a big American flag on the left shoulder, but it’s not present on the LEGO versions, which is a real shame. I know arm printing is more expensive, but when you think that so many minifigs have it these days, and as this is a special commemorative set, it’s really disappointing this wasn’t included. Still, I guess FireStar Toys might be open to doing something about this? (hint, hint, wink, wink). 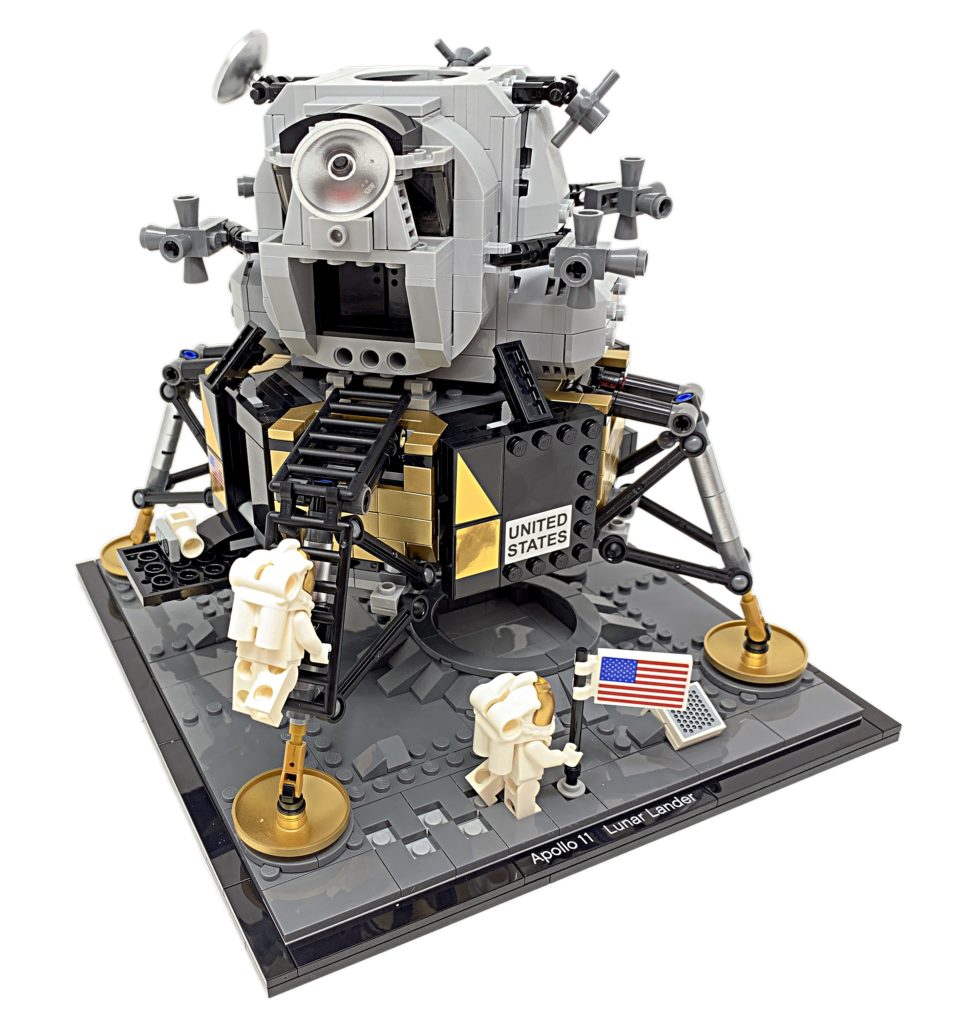 The Apollo 11 Lunar Lander and the lunar surface look absolutely great and are a pleasure to build. The whole set looks fantastic on display and you even have a handful of play features to enjoy. It’s just a shame about those minifigs. But if you want to improve them a little, don’t forget to check this guide.

And to reward you for reading till the end, here’s a 3-minute speed build of the entire set. Enjoy.