It has been about a year since I’ve started blogging for Firestar Toys, and I decided to commemorate this milestone by writing about my favourite franchise! And the timing couldn’t be more perfect! Just recently, a large part of the summer 2021 wave of LEGO Star Wars sets have been revealed, and I think it’s safe to say that this is the best wave we’ve had in a long, long time. There’s been nothing on par with this since 2015. Maybe the Episode 9 wave was nice, but this wave is near perfection. We have been asking for the Mandalorian and Clone Wars sets forever, so when these were rumoured, and then finally revealed – the whole Star Wars community flipped. And I want them all!

Most of you know me as the Marvel/DC guy. I’ve literally been doing this for a year, and somehow I’ve managed to create more than 50 articles, mostly focusing on LEGO superheroes. And I’m not even halfway through my DC articles. So everyone rightfully just thinks of me as the superhero guy – and that too most of my Instagram pics are superhero-related. It may be a surprise when I come out here and talk about Star Wars, but it’s really not. Most people who love superheroes love Star Wars, and the same could be said with me. And you may not believe this, but I actually love Star Wars more than Marvel or DC. Yes. Who would’ve thought?

So without further ado, let’s jump into this and take a look at one of the best Star Wars wave in recent years.

Oh! How badly I wanted this set! How badly we all wanted this set! This set means so much to me personally. I’ve watched the Clone Wars since I was a kid, and I actually watched it before I even saw the proper Star Wars movies. So when we got the final four episodes of season 7, I was shaking with excitement, and fear, and happiness, and sadness, and pure adrenaline in my seat. Those four episodes were the best Star Wars content – dare I say, the best finale to any show that I’ve ever watched! Yes, the Clone Wars at face value looks like a kids show. But in the inside, it is the richest Star Wars content ever. It introduced so much lore and characters, and stories into the universe and it made me appreciate Star Wars even more than I already did. So to get a set based on the biggest duel in the finale, I just feel so alive. 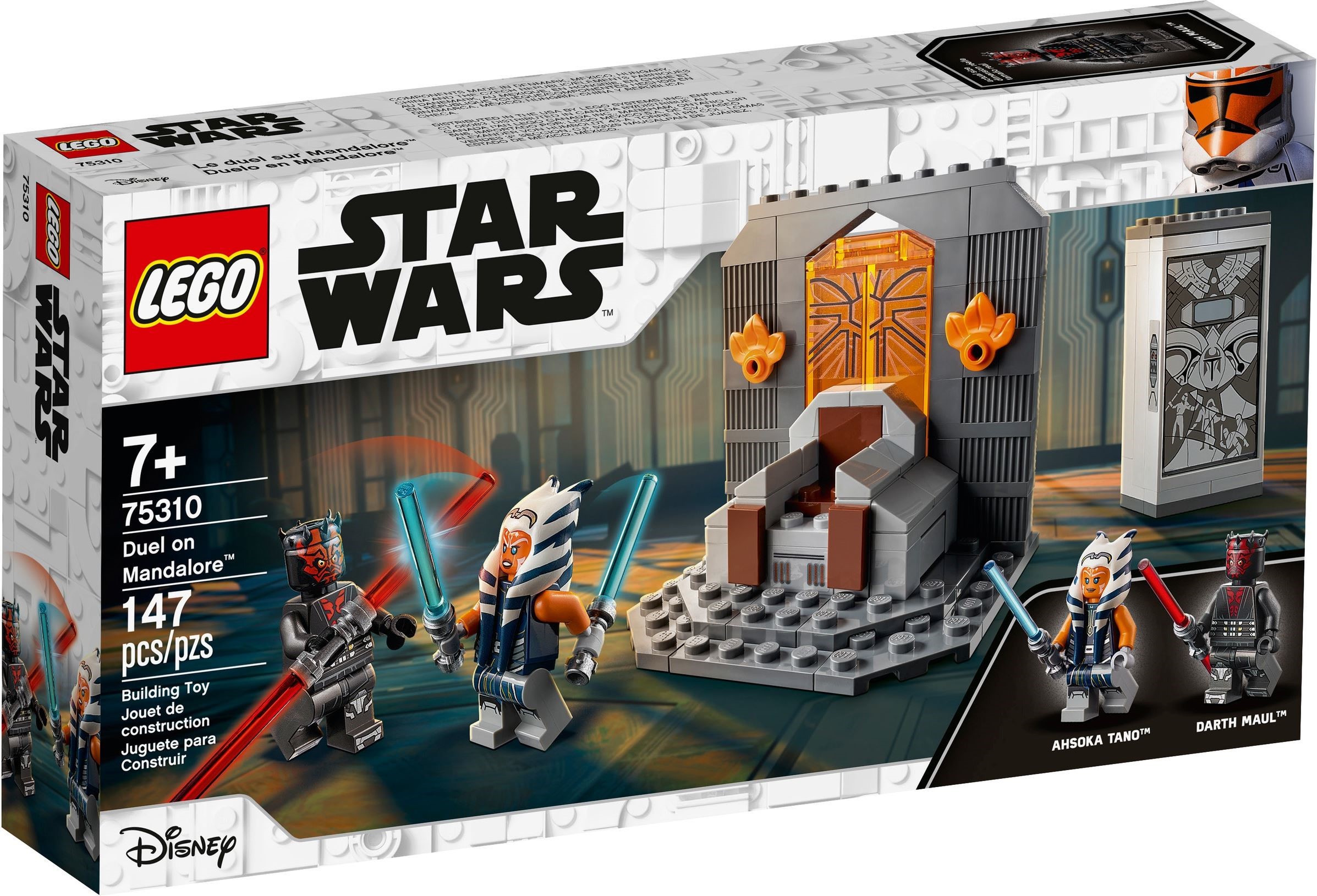 The Ahsoka minifigure in this set is a reprint of the 2020 version from the AAT. She uses her iconic headpiece with amazing prints throughout the whole attachment. Her face is done really well – I’m so glad when LEGO made the decision in 2020 to make the face-prints of Clone Wars minifigures look normal. Her torso is so damn cool and matched the accuracy of her appearance in the show. And yes, LEGO gave her leg printing, along with her iconic blue lightsabers that her master gave to her before he…you know. I’m gonna get teary talking about it. I just loved that finale so much. 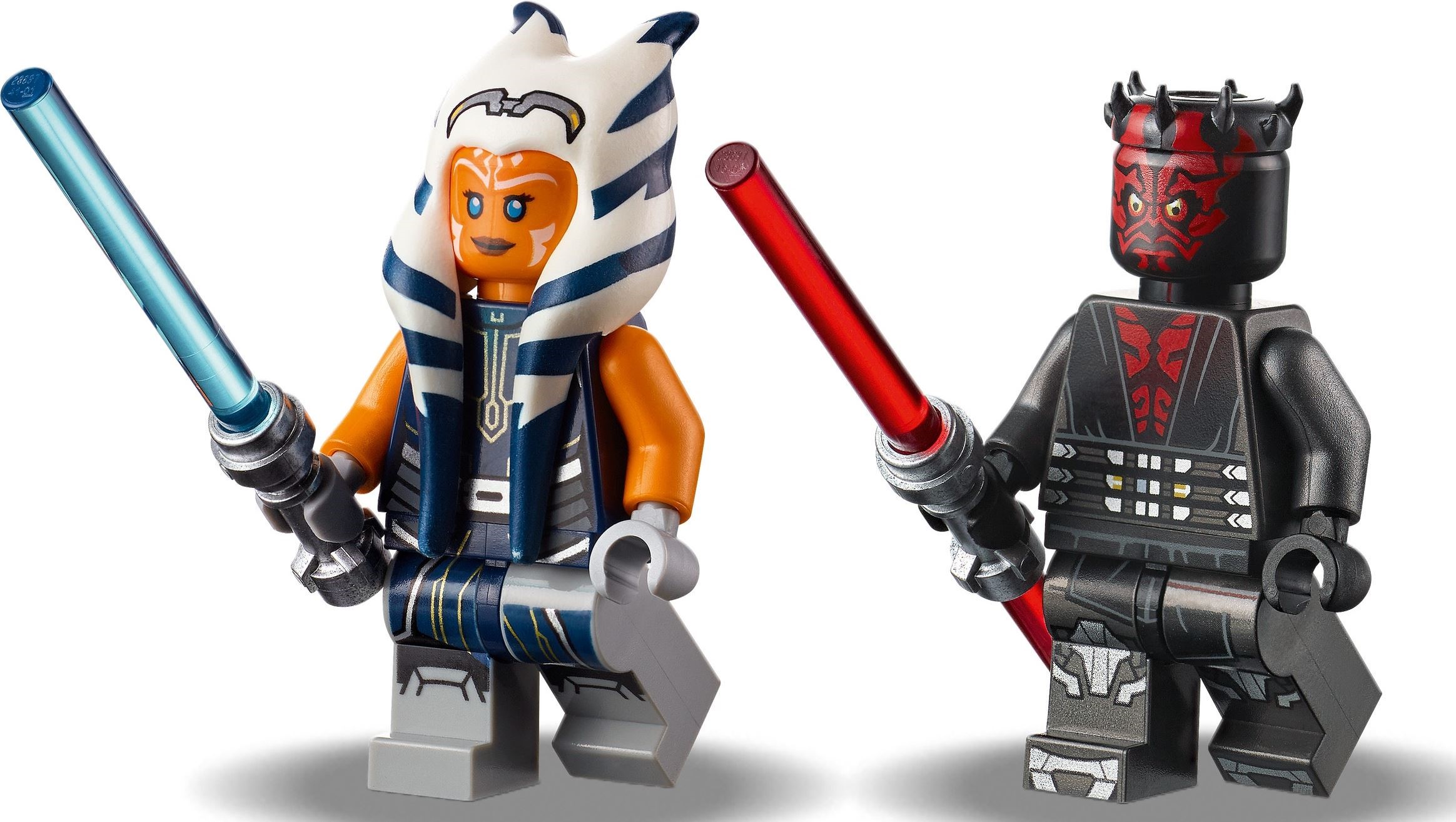 This is gonna be my first-ever Maul figure, and I am beyond hyped. He received his unique headpiece to represent his horns and his creepy face. His torso is again, very accurately printed, and so too, his legs. Finally, he comes with his dual-bladed lightsaber.

The set itself is perfect. For the $20 USD price, it gives you the basics of what you need to play out this scene. The first build is a Mandalore throne, which is built up very well. Under the seat lays a hidden compartment to store a gun. Behind the throne, you can throw Maul out the window as it is loosely attached to the wall. Finally, the set includes the cage that Maul is put in at the end of the episode. It is a simple, yet effective build. The door can be opened at the back to place him or take him out. Overall, this is a beautiful start to the new wave of sets. 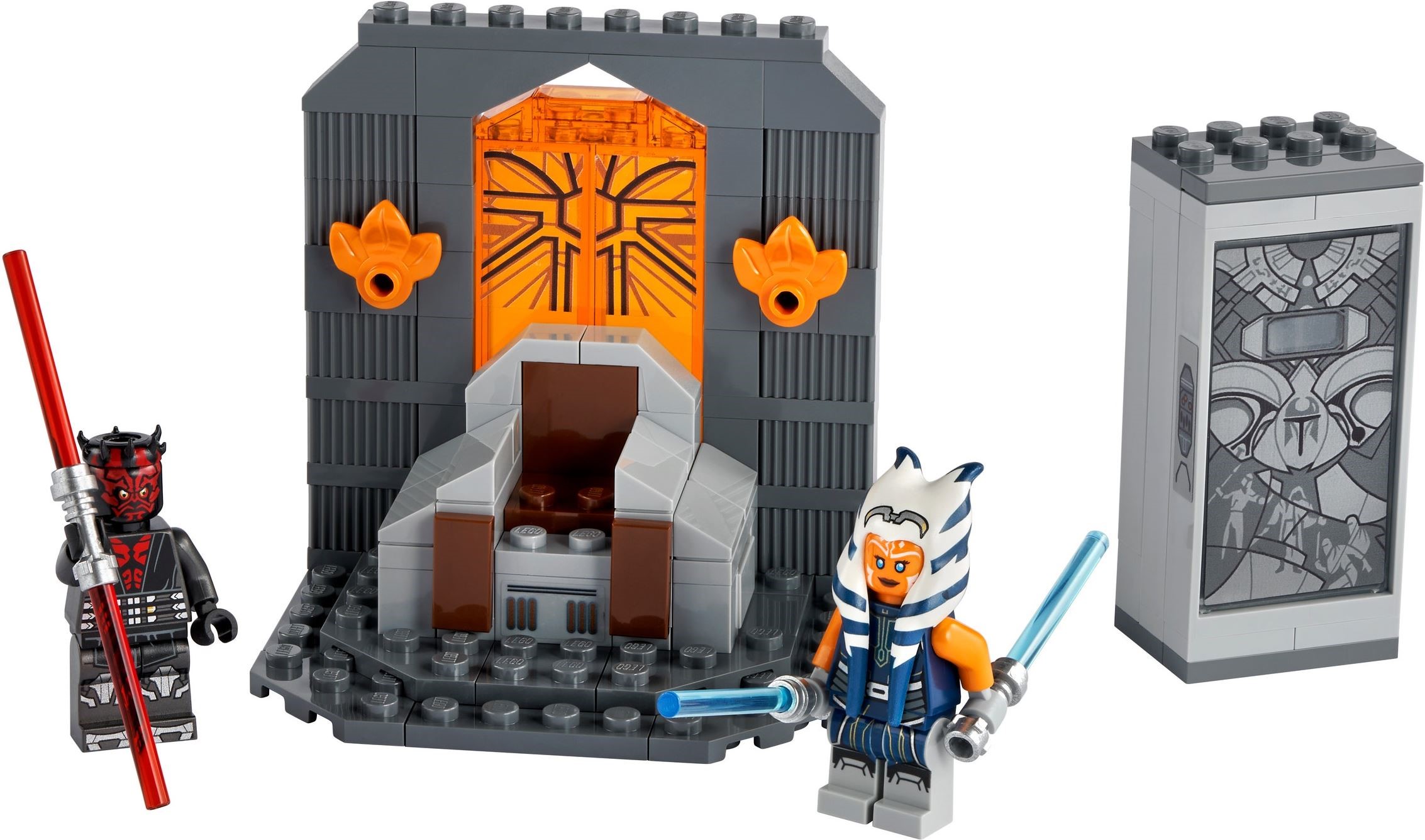 Retailing for $40 USD, LEGO surprised us with this beauty. When I heard of the rumour that this set would release, I told myself that it would be cool, but I didn’t have the intention of buying it. And now that it’s revealed. I need it. It was loosely based on Chapter 12 of the Mandalorian season. And I use the term loosely because it was kind of inaccurate. Here’s why.

The Greef Karga minifigure is a massive upgrade from the original. He receives a completely new face print to match his season 2 beard style. His torso is done amazingly, and I love the intricate detail throughout. LEGO printed on his trench coat, which carries over onto his legs, which also has amazing printing. He comes with a typical Star Wars pistol, which is nice to get. However, he wasn’t even in the scene.

We are also given two regular Stormtroopers. From what I can tell, they are just a reprint of the newer styled version released a few years ago, with that high-effort, yet controversial helmet mould. However, one of the biggest draws for Star Wars collectors is that Mortar Trooper. Again, this type of trooper wasn’t on the scene. He is basically a regular stormtrooper, but with yellow streaks all through his head, body and legs. LEGO included a pauldron piece which really rounds him out. Even though Greef Karga and the Mortar Trooper wasn’t in the scene, I’m glad that LEGO included them because I’d rather get two new figures than another Mando and Grogu. 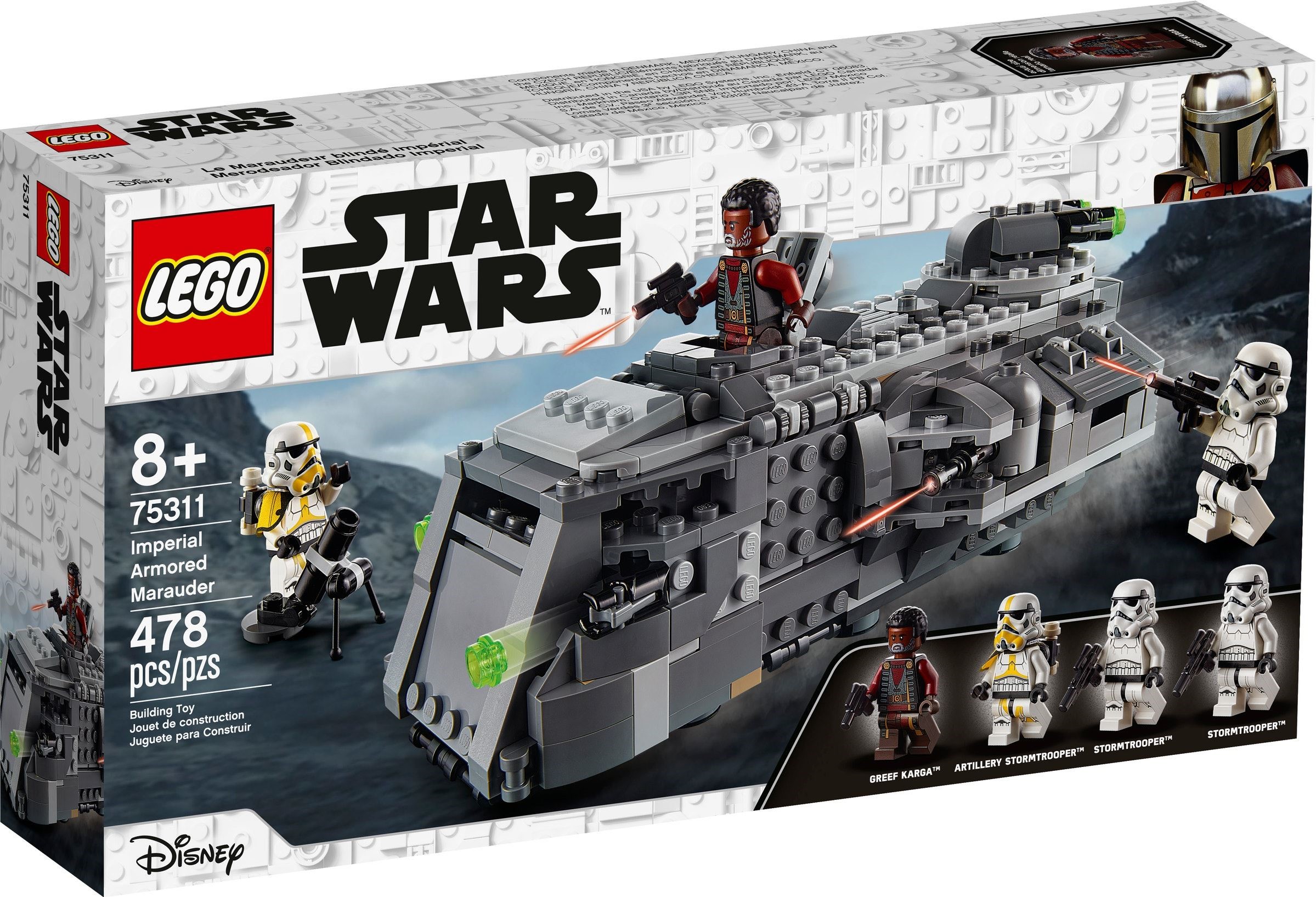 So after many years of the theme, we finally get our first, proper, official imperial troop transport. We actually did get one as a battle pack build back in the day, but that doesn’t count. This one is a proper imperial transport and LEGO nailed it. After watching Star Wars Rebels recently, I always questioned why this set was never made. And thank Mandalorian Season 2 for this masterpiece. Sadly, we don’t have full images or details on the set, so I’m just gonna make assumptions.

So the front consists of two stud shooters and the back of the ship had two more that can spin around. Both sides have doors on hinges that can be opened up. But to really access the ship, you can pull up the roof. Inside, you’ll have a seat for a driver, and 4-6 seats for cavalry. There are probably a few storage crates inside or clips to hold weapons. On top is an opening flap for a minifigure to peep out and shoot. Overall, this seems like an amazing set, and I can’t wait to have it in my hands, especially for the figures.

And that’s it for today’s article. Wow! I can’t believe I talked about two of the smallest sets from this 2021 LEGO Star Wars wave! I have a feeling that this look through will have a few more parts, so I’m extremely excited to talk more about Star Wars with you guys. But now I must go study for my management exam on Friday so wish me luck, and I’ll see you later!