LEGO introduced an original Arctic theme way back in 2000. The vehicles and bricks were an interesting assortment. All had to do with arctic exploration. The theme’s bright colours and large, easy to assemble pieces made it perfect for younger kids. So why did I pick it up? All will be revealed! Did you know, the LEGO Arctic theme was also the first of the LEGO themes to introduce the minifigure parka and the polar bear? Not to mention transparent meteors, blue spiders and bright orange scorpions? The sets were quite the mixture! There where 10 sets in total; the largest being the 6575 Polar Base set, complete with everything you could ever want for an Arctic mission!

The sets went as follows: 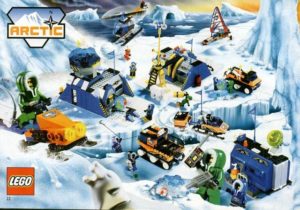 The first, 6520 Mobile Outpost, was an unusual set in that it was actually made up of 3 separate sets, each complete in their own polybags. You had the snow mobile (closest to the polar bear in the picture), then the snow tractor and finally a mobile base. The base opened up to a room full of equipment. For all of the sets, this had the most play value.

Then, if you where lucky enough, you could pick up the 6575 Polar Base set. It was the most expensive given its size, but it wasn’t short of things to do! It came with two large, white baseplates, both of which had part of the base built on to it. Part one consisted of the lab, as denoted by the Large X-Ray tile on the door. Part two was the tracking and living quarters. (Again, no sticker here!) It also came with a vehicle with a hook to pick up and transport the meteors, a small snow-mobile, and a helicopter.

Alternative Use for the Sets

I remember the first time I saw these sets I was reminded of John Carpenter’s movie The Thing. I am pretty sure this was why I bought the sets at the time. After all, they had all the elements for this included, everything that is, except the alien! 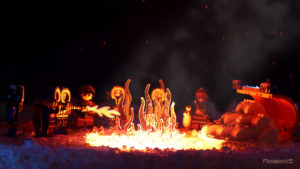 I was always surprised that LEGO didn’t go down this path as it would have been a good way of combing both the UFO theme which were still available in 1999 with the Arctic sets. It also doesn’t explain why the sets were discontinued in 2001.

Speaking of The Thing, in 2006 a guy called Andy Thornbery, using most of these sets, made an animated movie on this very subject! He captured the atmosphere perfectly, and although the movie is of poor quality, you’ll see what I mean! Just another reason why LEGO and animation go well together! 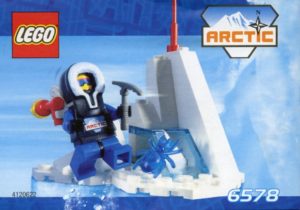 The LEGO Arctic sets also introduced many new pieces. Most notable being, as mentioned, the parka hood, the polar bear, and all important snow shoes! But it also gave LEGO fans a new colour to work with: bright orange. Additionally, we received a clear transparent meteor and coloured scorpions (of all things!). The base walls, too had older elements that hadn’t been seen since the early space sets. These elements, when produced in navy, gave the sets the right look. It was a nice touch to reproduce an older element. As it stands, the vehicles and equipment weren’t half bad, they just needed a story to carry the sets.

The background story used for the LEGO Arctic theme involved the explorers tracking down these clear meteors which contained either orange scorpions or blue spiders. The explorers then took them back to their base and, well, that was it. There was not much to go on, and at the time the story didn’t interest much. I remember this only too well as the shops at the time were over stocked with the LEGO Arctic theme and it wasn’t long before the sale price started dropping. Although I was able to pick up the entire theme quite reasonably, I was sure they could have done much better if the back ground story included a shape-shifting, mean-looking alien with a crashed saucer!

Updates on the Theme

The series made a brief return in 2003 and 2004 with nine new sets to revamp the theme. Then in 2018, seven more sets and better, more interesting looking machines were released.This time a little animated movie backed them up along with a much more interesting background story. Now the explorers of the LEGO Arctic are after much larger things to find in the ice!

These sets had a lot more moulded pieces than before and gone were the days of the little orange scorpions and blue spiders. Now LEGO fans had mammoths and saber-toothed tigers to find. These recent sets brought a new lease of life to the theme. Though it is extremely hard to predict how well these sets will go down with the kids, from an adult point of view, they are a vast improvement on the older sets.

They released seven new sets in total in 2018. These consisted of the following;

The base is the biggest new LEGO Arctic set and it comes with the mammoth. Although there aren’t as many sets this time around, the sets offered have covered the theme well. Even though I still see the odd set in the shop, mostly it’s the bigger ones, which is partly due to LEGO being more expensive than anything else. I must admit I’ve been tempted to buy one or two of these myself, but with no shape-shifting alien to contend with for now, I’ll pass. Also, gone are the days of just calling this a theme for the sake of it, as now it has been called “City Arctic.”

But none of that’s to say that the quality has suffered. On the contrary, the quality behind this is excellent, as is the play value. LEGO also came with the Arctic Explorer Seal of Approval, which was a feather in LEGO’s cap. Not many toys get that. I was surprised that the baseplates of the Ice Planet or Ogel’s Mountain Fortress didn’t show up in these sets, as it would have been nice addition. Given the price, it could have been easily added to make the sets more interesting, without having to draw attention away from the object of the story. After all, they are searching the ice for objects, aren’t they? 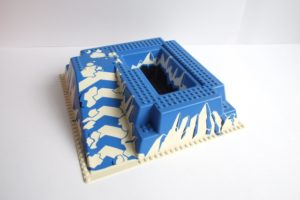 The attention is in the details, and without breaking the bank, the baseplates would have also been a good way of selling the sets and keeping things together (see pictures above). The ice theme printed onto them would have gave them a much needed boost in the right direction, don’t you think? I think you can still get the base plates on eBay, as well as the older sets. Alas! I did not keep mine due to lack of space, but I still regret I didn’t make The Thing movie or at least give it a go, as the original LEGO Arctic theme would have been a good place to start!

If you’re looking for more sets throughout time, don’t forget to check out this post about the evolution of Fire Stations!