Welcome back to Myths and Minifigs, where I take you on a journey through the supernatural world that LEGO has indulged us in over the years. By now, if you’ve been following this series, you’ll have noticed that this world of monsters and mythological minifigures is quite a diverse one, in that there are gods and beasts from every time period and every part of the world represented in plastic form. That said, nothing that we’ve seen so far has been obscure; these are all “headline” legends that they’ve adapted, things that they know their mass audience will recognise and want to buy. It’s a calculation they have to do with every new theme or series of blind bags. With that in mind, we come to today’s subject matter: classic movie monsters! It’s no surprise at all that LEGO would tackle imagery that is deeply ingrained in cinema culture. From the earliest days of feature films, horror movies would terrify their audiences with tales of vampires, ghouls and werewolves. Films like The Wolf Man, Frankenstein, and Dracula left their mark on audiences worldwide, and it is those infamous creatures that we will look at today! 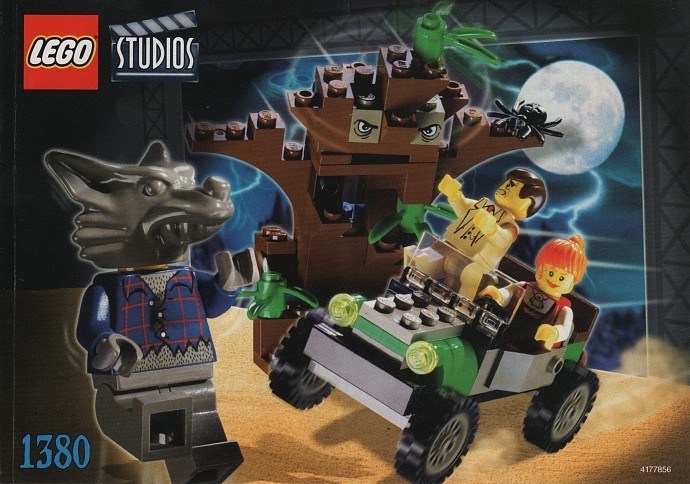 As a filmmaker, it’s likely no surprise that one of my favourite LEGO themes was Studios. Running from 2000 to 2002, Studios was many brickfilmers’ (stop-motion animators who use LEGO as their muse) first foray into filmmaking, as the main set in the initial wave had a small camera and some software included. These sets were constructed like production backlots, for films featuring motorbike stuntmen, dinosaurs, and even Sam Raimi’s Spider-Man. Of course, life imitates art, and in 2002, LEGO directly imitated the classic movie monsters of yore for the first time.

In 1941, a howl from Lon Chaney Jnr. gave birth to cinema’s most infamous werewolf, The Wolf Man. At the turn of the 20th century, Larry Talbot returns to his family home in England to reunite with his father and grieve over his lost brother, only to be bitten by a werewolf and succumb to lycanthropy himself! It is the beginning of much of modern werewolf lore, having been remade in 2010, and aped and parodied many more times. Remember Teen Wolf, or American Werewolf in London? Their cinematic bloodline traces back to 1941, to The Wolf Man, and the LEGO werewolves’ line similarly goes back to 2002, to 1380 Werewolf Ambush.

Amusingly, this first Werewolf minifigure is very self-referential, as his dark-blue torso is a torn variant of a jumper seen on many City minifigure civilians. The key element though, that brings this minifig together, is the moulded werewolf head, seen only here and on Professor Lupin in 4756 Shrieking Shack. It’s a large and bulky piece, and most of its successors are superior in their detail, colours and proportions, but this original is still a lot of fun, especially for its time. 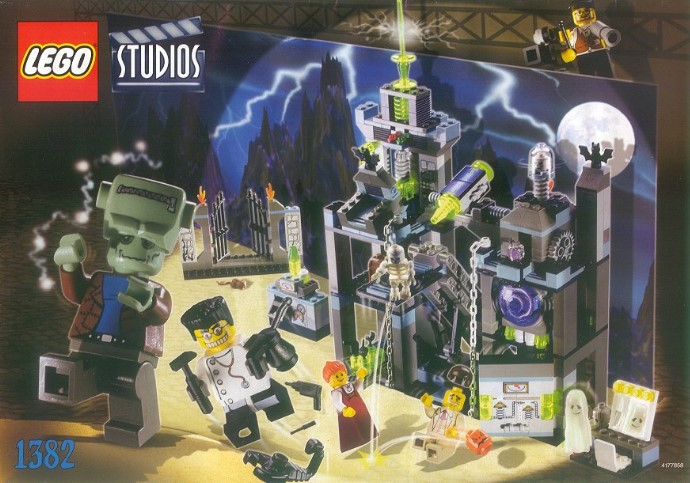 With Studios, LEGO also riffed on other classic movie monsters. The largest set in the wave was 1382 Scary Laboratory, which featured a crazy scientist bringing life to his sand-green-skinned creation: Frankenstein’s monster! First appearing in Mary Shelley’s 1818 novel Frankenstein, this monster is made from the dismembered body parts of the dead, and given new life through strange chemicals and a bolt of lightning. However, as the monster seeks to uncover its own identity, it struggles with a world that sees it only as a creature of evil.

Like the werewolf, this monster has a moulded piece for its head (well, upper head; there’s a regular old minifigure head in there too), one that’s oversized and has since been refined (and shrunk). However, the original hasn’t lost its charm, and definitely gives it the sense of being lumbering giant. 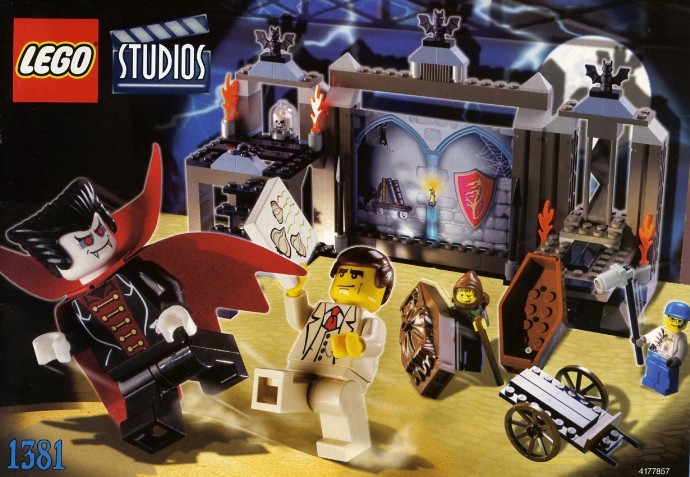 1381 Vampire’s Crypt, however, is my favourite of this series, and was LEGO’s first venture into the world of the vampire! Taking clear inspiration from the 1931 film Dracula, in turn an adaptation of Bram Stoker’s legendary novel of the same name, the set sees its onion-wielding protagonist running afoul of a Vampire. That said, the scene on the box art makes it look more like the Vampire has run afoul of the onions – their greatest weakness! Well, except sunlight, stakes to the heart, decapitation, fire, teenage girls, running water, holy water, crosses, iron and silver.

Anyway, back to the Vampire. Of the bunch, our Lord of the Night has held up the best. Though LEGO have made numerous other vampires since, most aren’t too much of a deviation from this original design: a black suit with a red undershirt, a flowing and villainous red cape, and a fanged mouth twisted into an all-too-cheery, somehow triumphant smile.

Oh, and don’t forget the widow’s peak hairpiece, which the Vampire now shares with Wolverine. Altogether, the likeness is perfect, and though more detail would be added in future iterations (as can be said of any recurring minifig character), the overall design has stayed the same. Why improve on perfection?

We wouldn’t see vampires, werewolves and Frankenstein’s monster reunited in a single theme (well, aside from blind bags) until 2012. If you’ve read my previous posts, you will likely remember that LEGO’s Monster Fighters theme is close to my heart. Unlike Studios, which was all framed as a series of film backlots, Monster Fighters’ world was “real”. Our heroes were staring down real monsters, some of which I’ve already introduced you to (Swamp Monster, Zombies).

When LEGO recycles ideas for a theme, 5 or 10 years apart, there’s always a risk that the sets or minifigures might be too similar and an easy pass for fans old enough to remember the last iteration. Monster Fighters was fresh. It had shades of Studios (and, bizarrely, Time Twisters) but carved out its own identity, and the time between it and Studios had also been long enough that minifigure designs had improved in leaps and bounds.

The Wolf Man’s imagery returns in 9463 The Werewolf. Like 1380 Werewolf Ambush, the set has a car and a tree, but that’s about where the similarities end, and the same goes for the werewolf minifigure itself. This one wears a ripped dark red shirt, torn jeans, revealing bristly brown fur instead of grey.

He also sports Wolverine’s claws in glow-in-the-dark white, and the head is replaced by a new mould entirely. This time, the detail is much more fine, which is especially impressive given that the head is better proportioned with the body than in its 2002 counterpart. The teeth, nose and eyes are also printed, the colour bringing a new level of life to this ferocious undead. 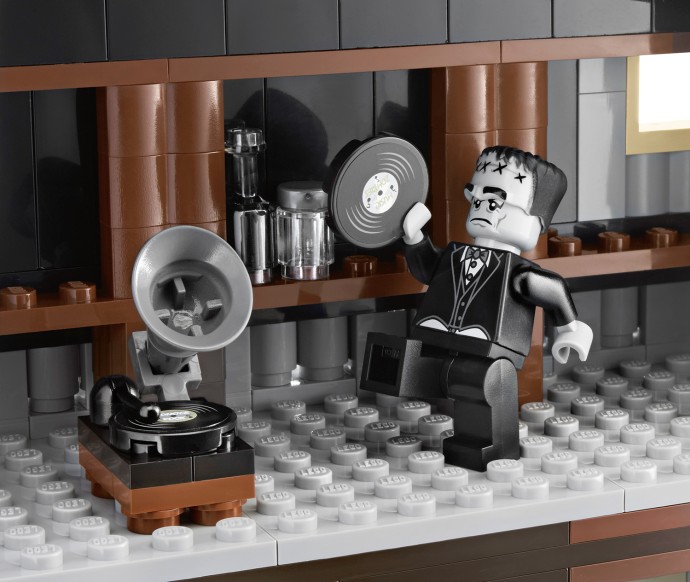 I could talk about the Frankenstein’s monster in 9466 The Crazy Scientist & His Monster – which is a smaller retread of 1382 Scary Laboratory – but Monster Fighters gave us the glorious 10228 Haunted House, a spooky mansion staffed by ghosts and zombies…and a Frankenstein’s Monster Butler!

The new head piece is light grey and topped with black hair, a massive refinement on his predecessor, and instead of wearing a brown suit, he is dressed in a very smart suit and tie, like an undead Alfred. As a minifigure, he is perhaps a little bit monochrome for many. As a joke, and an exploration of how these monsters might live, he’s a hilarious detail in a stellar set, and my second favourite LEGO version of Frankenstein’s monster.

Second only to one of his blind bag counterparts. In 2015’s 71010 Collectible Minifigures Series 14, LEGO both trolled and treated us with a version of Frankenstein’s monster who’s either found his true calling or having a mid-unlife-crisis. A dapper suit has been traded for a torn leather jacket and an electric guitar. He has absolutely no precedent in Mary Shelley’s book or the famous film. He is the Monster Rocker, and he’s the most ridiculous monster LEGO have made!

Out of the shadows

Vampires are so commonplace in LEGO themes that there are enough for me to devote an entire post to talking about them, which I plan to do down the line. You might also notice that I haven’t mentioned the Mummy…well, I have plans for the pharaohs of old too. For now though, it’s time to close the coffin lid, and snuff out the lanterns. Next time we’ll be sticking with movie monsters, though from a different genre entirely. Can you say tokusatsu five times fast? We will also be moving over to our new home at the Minifigures.com blog from July 9th onwards, so don’t forget to look out for us there. 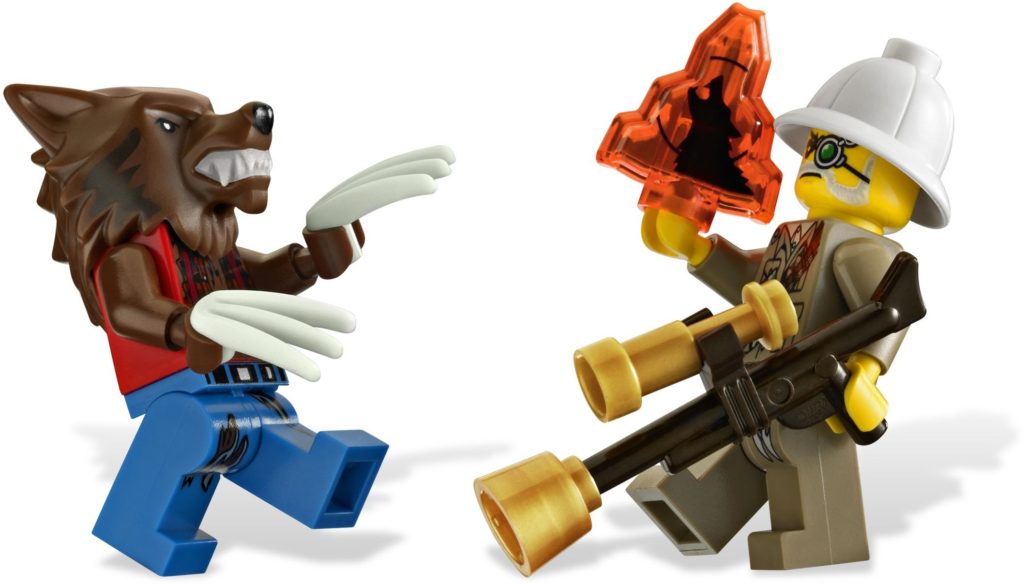 LEGO Scooby-Doo, where are you? A review and a request!