On the surface (if you excuse the pun) it seems like an easy question to answer, but perhaps a better question is actually “does LEGO float in all cases?”. Suddenly this is a more interesting question, and one I was quite happy to test. To do this, I enlisted in the help of Newbury’s J.B. Watt to test this question. She brought along Billy and Buster (the Test Dummy) to help. 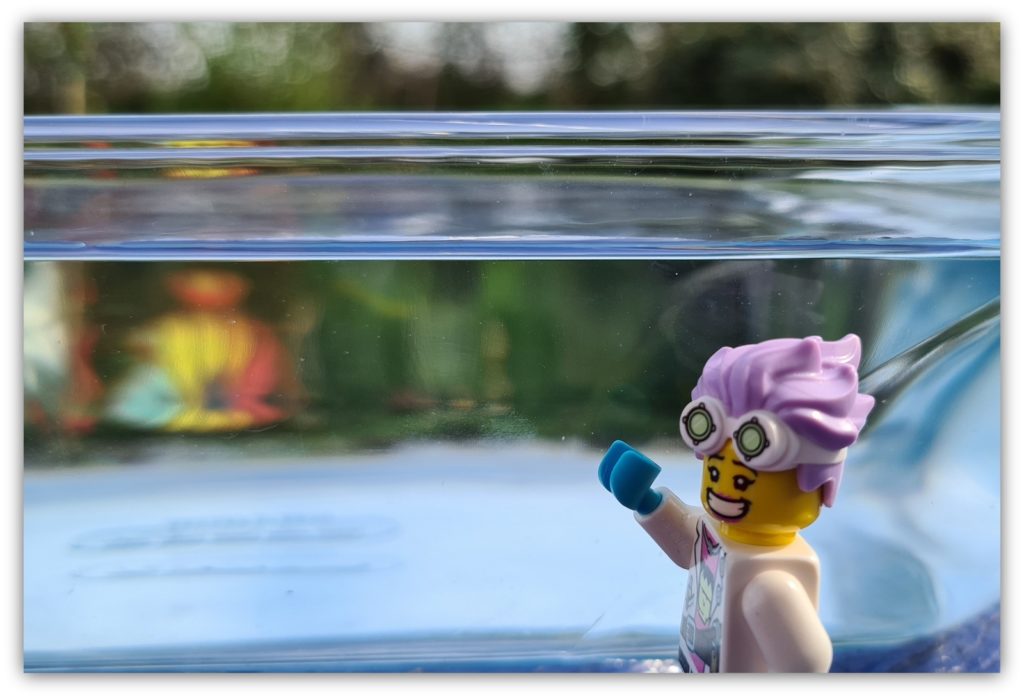 Ever wondered what makes some things float and others sink? A leaf floats on the water because it’s light, but super tankers and ships can weight many, many tonnes and yet they seem to float quite easily?

So, the first thing to think about is an object’s density. Heavy things sink, light things float. Things can be made to seem lighter in water, by reducing their density; this can be achieved by making them hollow.  This reduction in density introduces the next factor; that of buoyancy. Buoyancy is a bit like gravity, but where gravity will pull things down, buoyancy will make them float. A “positively” buoyant thing will float (or rise), a “negatively” buoyant thing will sink; finally, a “neutrally” buoyant thing will neither float nor sink.

But for our experiments, there is another factor to consider; that of the Meniscus layer on the water surface. This is a layer of tension, which acts like a sort of barrier. It’s not very tough, but it allows the water to hold together; this is why water forms droplets when you splash it about. For very light things, this water tension can also provide the difference between a thing floating or sinking. Some animals, like the Water Boatmen, use this tension layer to walk (or skate) across the water’s surface.

So, we know light things float, heavy things sink and if the thing is pointy enough (with enough weight) it will either break through the water surface or not. Okay, onto the tests! 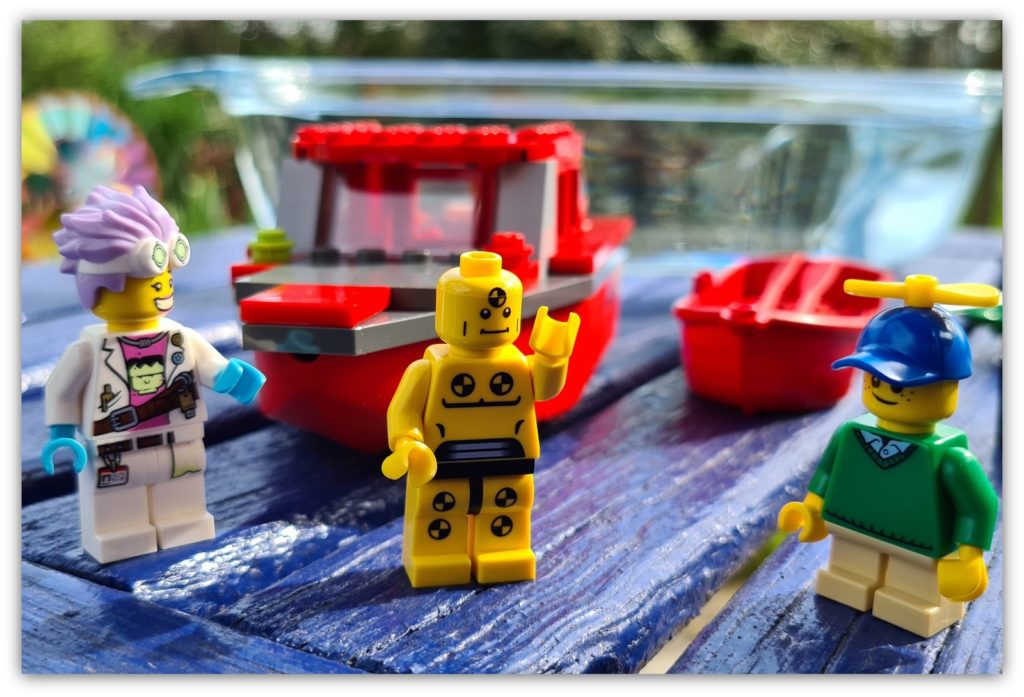 Much as I have a lovely pond for floating LEGO in, it isn’t very clean and there’s a much bigger risk that I would drop and sink something, and I didn’t want that to be my phone or the LEGO.  So, I found a clear glass dish that we filled with water. We could then control how far the subjects drifted (or sank).

The tests themselves will consist of effectively two parts; first, we’ll float the LEGO on its own and then we’ll add Buster to see what impact that has. I’ll make an observation here that Billy got very into testing and sort of forgot about photography, so there will be some pictures that don’t show all the tests; there are also photos that looked okay on the phone (or so he said), but were out of focus when I looked at them more calmly afterwards. But you’ll get the idea anyway.

Two LEGO things I know float and support LEGO figures are my dinghy and the little speedboat.  One thing that is worth noting is the fact that in both cases they are leaning over! This is because there isn’t a centre rudder under the boat. Older LEGO boats (that could float) also had a weight to provide the balance so they floated upright.

The next test that I wanted to try was to see if Buster floated or sank when I put him in water. The result was … he sort of floated.  As we can see from the side, quite a lot of him is underwater. There is obviously some buoyancy to him (after all, his body does have an air cavity, as do his legs, and I didn’t try tapping him to see if he would then rise, but I’m going to say that yes, LEGO minifigures float!

(actually, I have tried taking photos of LEGO figures in swimming pools and in the sea, so I knew they floated. I just hadn’t realised how far under the water they were!)

The next test was to see how Buster behaved if we put a rubber ring around him. I had hoped that he would float upright, but no…

The second image was the “corrected” image as soon as I put Buster in the water, he (and the Bat duck) face planted into the water!

So, here’s when the testing started.  If you have ever tried to build a brick boat and float it, chances are that it didn’t float at all successfully. So, for these tests, I used a 2×4 plate and a 2×4 brick.

The results were as expected. Because the brick and the plate have a hollowed underside, they do have some buoyancy.  The plate is so light that the meniscus also plays a part in keeping the LEGO buoyant:

Now for the second part of the test we add Buster:

It is handy that Buster is a neutral weight; if he had been heavy, he would have sunk the LEGO. You can see from these two pictures that Buster is keeping the plate floating and you can see the impact on the air buoyancy in the brick!

For the next round of tests, I used a DUPLO pizza, an army stretcher and a vampire coffin.  It was only after the tests that I noticed the two 1×4 plates under the stretcher from when I had used it as a bed in a model!

They all float! What I thought was interesting here is that you can see from the distortion on the water surface how the meniscus has attached itself to the objects in the water. However, lets look at the coffin; the right-hand side is right on the edge of going under and taking on water! What will happen when we add Buster? I decided to open the coffin and float the visible chain side down (so there was some weight) and then place Buster in that.

And the result was that they all floated! It’s looking like the question “Does LEGO float?” has been answered!

Oops! Hang on! Iceberg ahead!

My next two test subjects were an upside-down umbrella and one of the new kayaks.  I didn’t test the open canoe as I found in the past that it wasn’t very stable and capsized quite easily due to its narrow shape. But the umbrella looked very stable when I tested it without Buster, as did the kayak, so I added Buster to the umbrella and the kayak (and for good measure gave Buster the two oars from the dinghy).

So, we had a sort of yes with the kayak (you can see how low it’s sitting to the stern) and a complete no for the umbrella.  That wasn’t a slow sinking either; it just went straight down!

I decided to expand the test on the kayak, removing the oars from Buster. He floated for a bit; then…

The kayak had taken on water in the cockpit area, and then slowly he capsized. They didn’t sink, but unless you were going for the partially capsized photograph this isn’t a successful result.  I should also point out that the time it took for the kayak to take on water was less than the time Buster floated about when he had the oars; obviously they helped provide some buoyancy.

The final test was to use LEGO bricks again, but this time as a dinghy construction.  As soon as I put the build in the water, I could feel the buoyancy push back; so, I added all the figures: 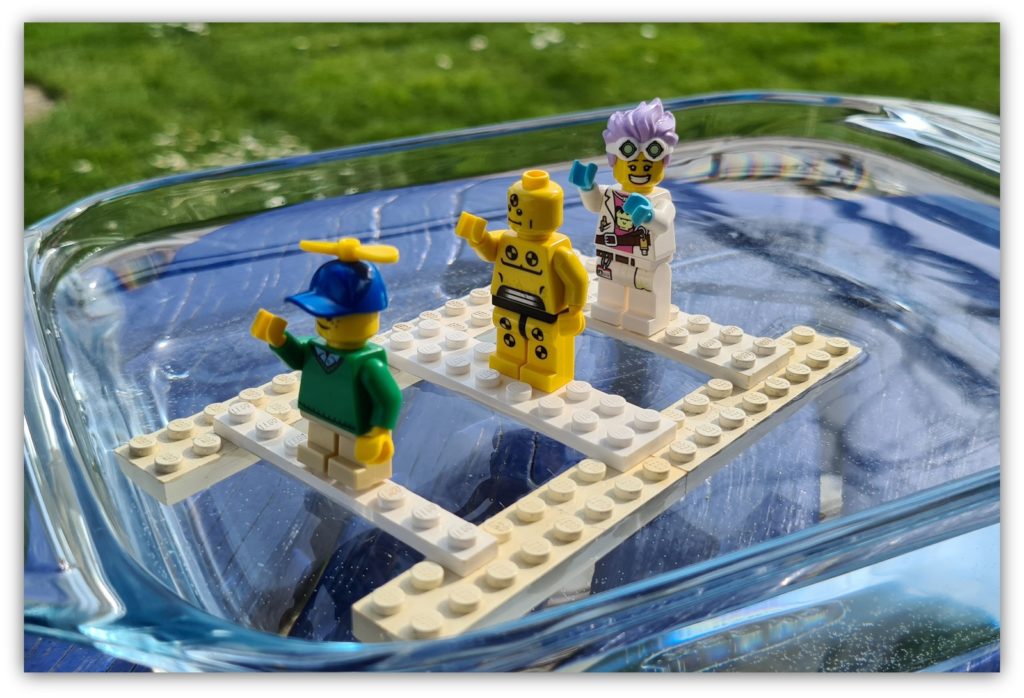 An obvious success, and we can see why.  Each of the four 2×8 bricks has air pockets providing buoyancy and this is distributed over a wider area, making it very stable indeed!

I would also note that even when LEGO does float, it doesn’t always do so in a way that would be expected in a “real world” scenario and can be rubbish for photography!  I was also really pleased that I didn’t do the umbrella test in the pond either!

Don’t forget to check out our other article here about LEGO and water!

Can LEGO Go in an Aquarium – Creating Fish Fans of LEGO!