Welcome back to Myths and Minifigs! Last time, we travelled back in time to ancient Greece, and had a look at the Greek gods who had been made into official minifigures. Now, the gods were important to the people of ancient Greece, but where there is benevolence, there must be an equal malevolence. Elemental forces in eternal opposition, one side protecting and nurturing civilisation, the other attempting to cast it into ruin and chaos. This week, we are looking at the LEGO monsters of ancient Greek mythology, which are perhaps the most infamous mythological monsters of them all.

Before we get into the LEGO monsters of ancient Greece, I want to note how far-reaching their influence has been. There are asteroids, satellites, pieces of software we use every day, superheroes and villains, and even real animals named after these horrible beasts. Chances are that you dimly know some of them, even if you don’t think you do, because of how deeply ingrained in our cultural consciousness they are. Anyway, on to the show! 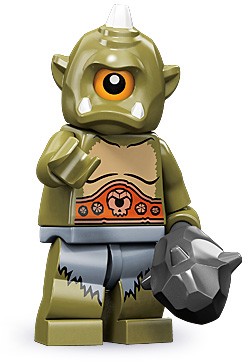 Put your hand over one eye for twenty minutes and try to get on with the housework. Now you’ll have a little bit of sympathy for our first monster, who makes up for a lack of depth-perception with ferocious strength and a voracious appetite for miniflesh! The Cyclops is a one-eyed ogre (and usually the offspring of Poseidon and a sea of river nymph) that lives far away from the cities of the Two-Eyeses, tending sheep and slaughtering invaders in relative peace.

Of course, one Cyclops called Polyphemus got more than he bargained for when the hero Odysseus and his crew landed on Cyclops Island on their voyage home from the Trojan War. Polyphemus trapped the warriors in his cave and ate them one-by-one, until Odysseus tricked him into getting blind-drunk (get it? I’ll see myself out) and then stuck a burning log into the Cyclops’ single eye. The remaining heroes escaped, though Polyphemus did get daddy to curse the warriors, and so had the last, bellowing laugh (though I guess he must have racked up some heavy optometrist fees getting his eye fixed).

The minifigure itself is a perfectly balanced caricature. A bigfig would have better befitted the legend but, as it was a part of 71000 Collectible Minifigures Series 9, the designers had to pack the Cyclops’ features into a normal minifigure while keeping him enacting, which they have definitely succeeding in doing. The big, bulbous head is cartoonish but helps sell the imposing, heavy bulk of the creature, as does the dark grey club gripped in his hand. The Cyclops has two faces: one fully-open, staring eye, and one narrowed one, presumably searching the back of his cave for more arrogant heroes who might try to blind him.

Yes, that’s the plural of Cyclops. Well, according to my old ClassCiv teachers, at least. 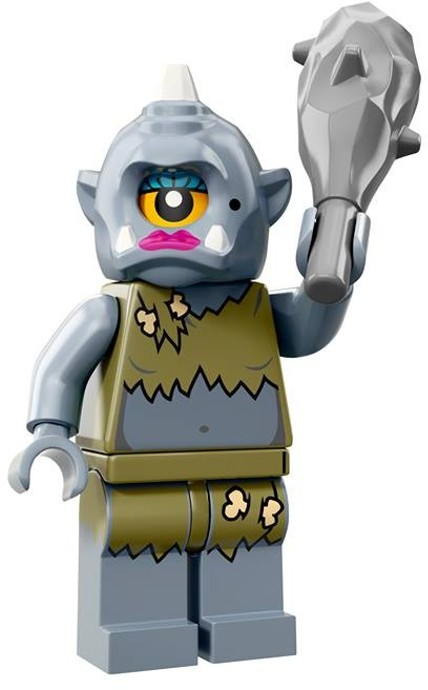 Bizarrely, the Cyclops has a cousin in LEGO’s third Space Police theme. In 5979 Max Security Transport, we meet Snake, a yellow-skinned minifigure wear a Mad Max-esque headdress and bearing on his face a single, arachnidan eye. He is a far cry from the Collectible Minifigure Cyclops, but I suppose his inclusion in the line just goes to show how far-reaching its effect on fiction has been.

Though we never see one in Greek myth, LEGO did make a female Cyclops 4 series later, affording the lonely Cyclops some happiness. She uses the same headpiece as the male Cyclops, only this time with pink lipstick around her mouth. Her skin is also sand blue, in contrast to the Cyclops’ olive green.

Bless ’em. Bet it was a lovely wedding. 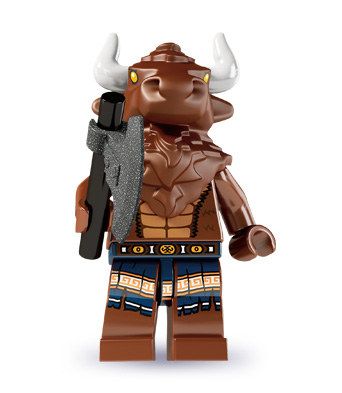 You might enjoy being confused by a hedge maze today, but for the people of Crete, mazes took on a whole new, terrifying meaning. Beneath the city was a huge labyrinth where King Minos had locked up the island’s most horrifying citizen: half-man and half-bull, with a burning hatred of humans and gods and an insatiable hunger for miniflesh (I’m sensing a theme here), the Minotaur is another infamous monster that LEGO finally immortalised in plastic in 8827 Collectible Minifigures Series 6.

Asterion the Minotaur was supposedly the result of a curse upon Minos’ wife Pasiphae (the full story is a bit NSFW) and was fed human sacrifices once a year to keep him from leaving his labyrinth and wreaking havoc on the city above. However, one year, the demigod Theseus decided enough was enough, and with Princess Ariadne’s help, made his way through the confusing labyrinth and slew the beast.

Another excellent likeness, the Minotaur minifigures main feature is a moulded head with beady yellow eyes, and space for two horns. While the Minotaur’s head can’t be moved side-to-side like on an ordinary ‘fig, the trade-off – a thick, furry neck that lends the Minotaur a considerable amount of imposing muscle – is a worthwhile one, selling the Minotaur’s fearsome strength. There is also printing on the legs: a Greek warrior’s armoured skirt in dark blue, and two black hoofs printed over the minifigure’s feet. All in all, the Minotaur is an excellent design, one I hope to see in a full set someday, and a hard act to follow.

LEGO being LEGO, they outshone even the Minotaur when it came to what might be the most famous Greek monster ever (second only perhaps to Pegasus, the winged horse). In real-world ancient Greece, there was a hideous face that people would put over their doors to ward off evil spirits, a practice that no doubt gave rise to the gargoyles you can see on buildings today. A scowling, fanged face, with bulbous eyes, and a nest of snakes for hair…this, ladies and gentlefigs, is a Gorgon. 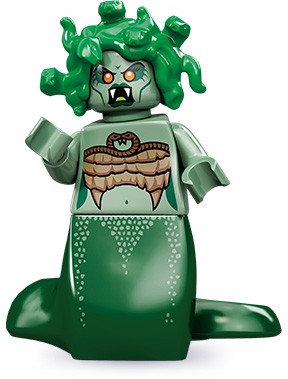 You might be more familiar with the name Medusa, though there were actually three Gorgon sisters (and a fourth, a grandmother, depending on who you ask). Originally human, Medusa in particular was a beautiful young woman, so beautiful that people began likening her to a goddess. I’m sure you can guess how the real goddesses felt about that, so after an incident with Poseidon in Athena’s temple – one which, I’ll be perfectly honest, wasn’t Medusa’s fault – Athena laid a curse on Medusa. Now, anyone who gazed upon Medusa’s famous beauty would be turned to stone! The curse was given to her sisters too, who made the simple mistake of being born to the wrong family.

The minifigure is, thankfully, safe to look at, and it’s astonishing. We live in a post-Ninjago world, where LEGO has toyed with serpentine minifigure pieces and Medusa benefits from this: instead of legs, she has a long, green tail, just like her film counterpart in Clash of the Titans. Her skin is sand green (just like the Statue of Liberty minifigure, if you were looking to switch to a less monstrous face) and her torso printed with the Gorgon equivalent of a sports bra, only made out of bones and leather.

The best printing though is on her face. One side of Medusa’s head is normal: beady green eyes, a feminine mouth with sharp fangs jutting out from the top lip, and a slightly bemused expression. The other side tells of a different, less serene Medusa. Her mouth is open in an animalistic snarl, and her green eyes have turned orange, presumably while she turns a poor, unsuspecting mortal to stone!

The icing on the cake is a new mould to this minifigure, a snake hair element in green, to complete the look. Remember when I said Medusa had sisters? Well if you’re looking to add them to your collection too but want to make them more distinctive, look no further than General Machia from 70625 Samurai VXL, where this hairpiece appears again but in dark red.

So there we have three of classical antiquity’s most fearsome beasts captured in plastic. For me, they are absolute show-stealers, showing off just how versatile the minifigure aesthetic can be in order to capture these strange, inhuman likenesses. I hope there will be more Greek LEGO monsters in the future, though my wish list strays from minifigures into animals and brick-built LEGO monsters like Chimeras or Manticores. Knowing just how many mythologies Ninjago ends up incorporating, I’m sure we’ll see them sooner or later.

For now though, it’s time to close the coffin lid, and snuff out the lanterns. Next time, we’ll journey to a part of the world that most do not normally associate with fantasy, to take a look at the mystical inhabitants of small, golden lamps…