There have been two predominant sub-themes in the Town/City theme since the beginning of time: The Police and the Fire Fighters. Every few years we get this huge LEGO Fire Station or Police HQ that fascinates us with its size and content. Have you ever wondered how they have changed over time, or how much? Well, I have. So I wanted to see how the fire station sets have evolved and how they became to be the sets that they are today. From 1978 to today, these are the LEGO fire station sets that have been released:

This set may look primitive by today’s standards, lacking all the bells and whistles, but most of the pieces and accessories we see in this set are still in use. Sadly, that grey piece thingy on the roofs is no more available, or relevant. There was not much of a decoration in the station. Even the phone was just a slope piece without a print. Also, there were no doors, no enclosed cabin or (now I realised while writing) no fire hoses on the vehicles. But this set had something that no other LEGO fire station came after didn’t have, an opening office area. The set would instantly become larger. This set also had an all red US version with transparent garage doors (me is envious!).

The design of the fire station was greatly improved with introduction of a single piece, the garage door. Every other piece was already available. Yet, I think the interior still lacked attention with only having a desk and a bed. The vehicles on the other hand, wow, not only they had doors , closed cabins and brick headlamps, but also the small one had an opening hood for God’s sake! 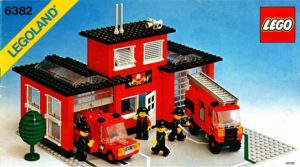 This set had a very similar station design, the only major change being the use of new large windows, making the set look a tad more modern. The control room had little bit of improvement, but there was nothing else on the inside. Seriously, nothing. The two vehicles had slight changes, but not necessarily for the better, in my opinion. 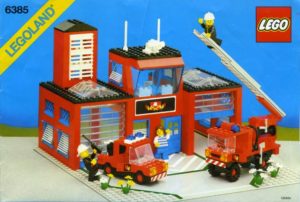 In 1990, in spite of the addition of a helipad and a helicopter, the station building itself had very little visible design change. But, that wasn’t the case with the vehicles. The smaller vehicle was turned into a beautiful SUV with balloon tires, and the fire engine was this ultra sleek and futuristic fire fighting vehicle, which I’m still trying to imitate with my spare parts. Oh, I almost forgot, we finally the guys got a coffee machine in the office. 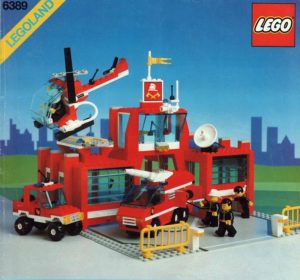 After three similar looking LEGO fire station sets, this time around the station was redesigned from ground up. With three floors, it was towering above the town. The helicopter had an retracting hydrant system, which was so much fun to play with (still is). The fire engine was turned into a more conventional vehicle with nice little details on it. 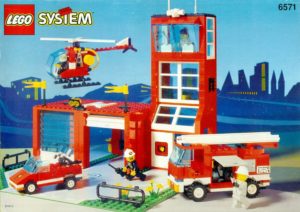 In 1997 this happened. Every AFOL (Adult Fan Of Lego) knows about this phenomenon: Juniorization. Today we have ‘Easy Build’ sets, besides the regular ones. Back then regular sets were no more, only juniorized sets. I really don’t want to say anything about this set. 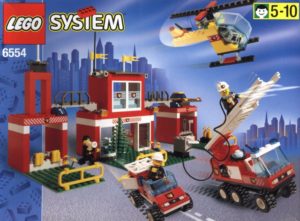 This was a little better than the previous set, but that’s not saying much. Hey, the tricycle is cool though, right? 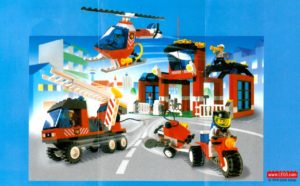 Although I was glad to see the return of the conventional design and look of the station, the set was a serious downgrade from the glorious sets of the early 90’s. The design was reminiscent of 6571 but lacking a whole fire engine and the helicopter support. The new vehicle had updated fender pieces but it was lacking doors, a misstep if you ask me. I’m also not a fan of dark colored windows. And for better or worse, we got different expressions on minifigure faces. 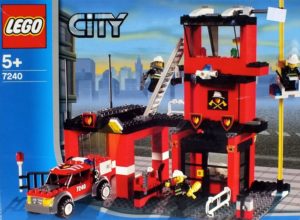 Now, this is more like it. Not only was I pleased to see those lovely light blue windows, but also the set had a nice size to it. The small car looked dorky, yes, but it had an opening trunk that let us store the fire fighting gear. A 6-stud wide fire engine was previously released back in 2005, yet it wasn’t included in the previous LEGO fire station set. The fire engine in this set was also 6-studs wide, with modern looks and nicely built telescoping boom functions. The design of this station reminded me of 80’s sets a bit, but at the same time little details in and around the station made it original enough. 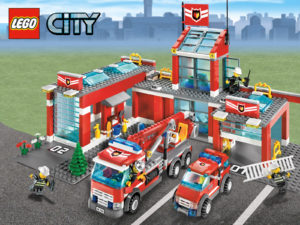 I have to say, this set looks really good. It feels fresh. Sure, the contents were basically the same, but the overall design of the station looked very modern. We finally got a decent living quarters for the crew with a flat screen TV. The reception also had couple of nice touches with a coffee maker and a cool computer. The fire engine had a very different and modern look with new windscreen and crew cabin, I like it. I cannot say the same thing about the van though, it looked just as dorky as the previous model. And we had a cat to save, for the first time. 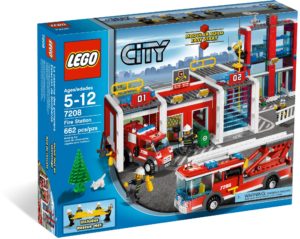 I’m conflicted about how to address this set. Is it a step forward, or backwards? We had a helicopter again, after almost a decade, yet the design of the vehicles feels uninspiring. There was nothing new or different about the van and the fire engine. Station was also a mixed bag, while the main building looks nice and modern with improved living quarters, the garages were missing the subtle touches of the previous set. 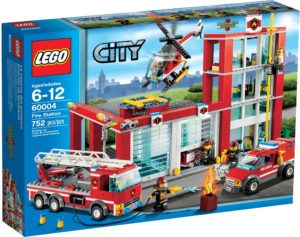 At first glance this set looks very different with its angular layout, new vehicle designs and a hot-dog stand. But don’t let the appearances fool you. This was exactly the same set as the previous one, except for the revolving doors. I mean, look at it… Put the modular builds side by side, the main building being on the very right, and the helicopter pad located on the front side of the garage, and what do you see? 60004 with a better fire engine. Yes, I admit, the fire engine in this set looks and functions better. Even the car looks better, because it’s straight up a regular car. I loved the hot dog stand though, it really adds color to the set. 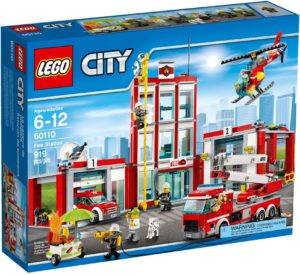 Sometimes a little change is appreciated. In this case, there are a lot of changes, and they are all appreciated. The main building is a bit smaller in scale, but by no means lacking. There is good amount of interior detail. Replacing the helicopter with a drone is not only showing that TLG is in touch with modern tech, but also I’m guessing helps the overall cost of the set. Reducing the vehicle number helps too, only if you have one really good design, and yes, it looks good. With the addition of light & sound piece, I can imagine how much fun it is to swoosh that SUV around. The jet ski looks rather simple, but I wouldn’t expect to see a fire boat after going through all that cost cutting tricks. Wow, are those new axes? I haven’t noticed it until now. End of an era my friends, end of an era… 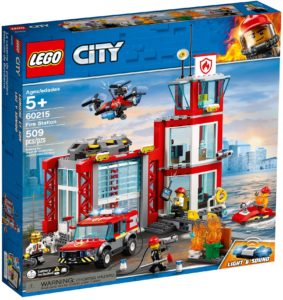 Now, would you look at that. That’s one beautiful set both outside and inside. I’m not even going to try to list all the beautiful details in this set, because I’m afraid I might miss something. Instead you should check it out yourself. And, If you really liked this set after seeing it here, you are out of luck because you missed it by a decade.

Winter Village sets have become sort of a tradition for the Christmas Season. Regrettably, I haven’t paid attention to this theme until now. Ten very beautiful and unique sets have been released since 2009. As usual, it is very different than the city sets with its vintage looks. The colors and the brick built elements nicely draws out the Christmas spirit. 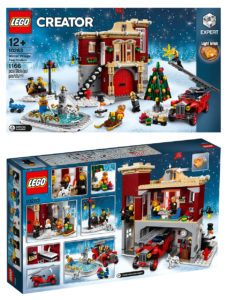 I always enjoy a trip to nostalgia. Especially because I have been there from the start. One of my first sets was the 374 Fire Station. I remember playing with it vividly when I was around 6, hesitating about applying those darn stickers (I still do). You can call it love at first sight. I’ve never stopped collecting LEGO sets since, just slowed down. Anyways, this is the first step to a larger world, I hope I can find a chance to write more about old sets.

LEGO: An Inspiring Toy for Kids and Adults Alike