Carrying your LEGO in your pocket is great; after all, minifigures will fit in pretty much everyone’s pocket! There is a big “but” and that’s if you want to carry some accessories with your minifigure. Much as they have grippy hands, the accessories are quite small and can get lost amongst the coins and pocket lint. I’m going to look at a relatively new item in the LEGO range, the pod. I’ll look at the original and the new pods on the block; and I’ll also suggest alternatives.

“Put down that cocoon!” 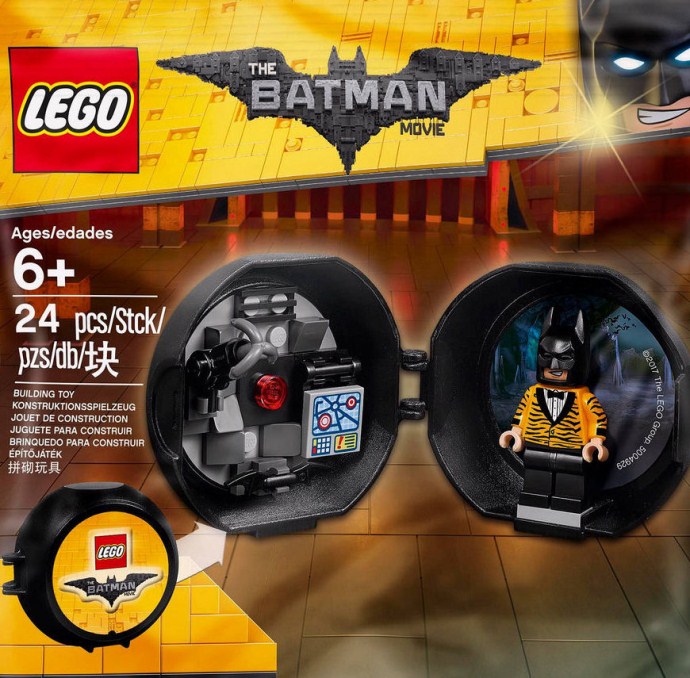 (Above image from Brickset)

Back in 2017, LEGO released set  5004929-1, Batman’s Battle Pod.  A few others were also released as well, but these seemed to have slipped my attention.  The pod was a clever construction with a small stand on one side for the figure and a plate on the other side that you can clip the accessories to.  The pod hinges open and closes with a click.  Now, you can put your figure into the pod, put the pod in your pocket and go anywhere, safe in the knowledge that when you get to your destination to do battle, Batman would still have his grabbing hook!

As I’ll explain later, I did get hold of one of these, Zane’s training pod in 2018 when I first saw it. Much as I do like the Ninjago theme, I’ve not kept up to date with all the various episodes and adventures, so I haven’t really appreciated the evolution of the actual minifigures.

As I mentioned earlier, I did get hold of one, but not for the Ninjago parts.  I spend half my working week in London and because of that I started to collect a lot of London related accessories to go with Lester; and I needed something so that I wouldn’t lose an accessory such as a LEGO Oyster card!

As you can see from my image below, I now have my pod set up for everything the busy London commuter needs; roll on the summer when it will be light enough to photograph Lester around the capital! 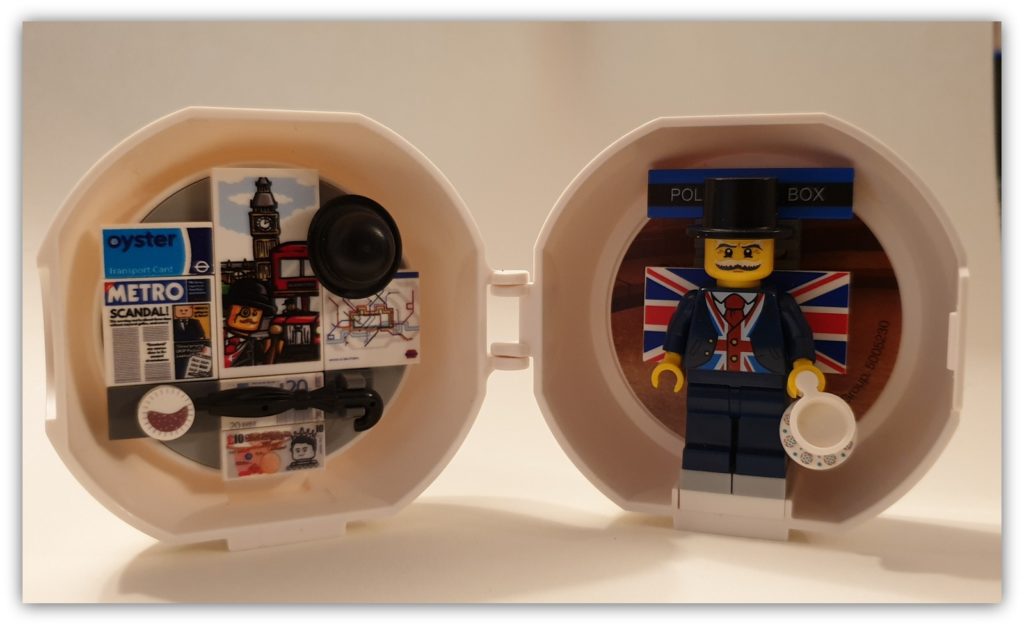 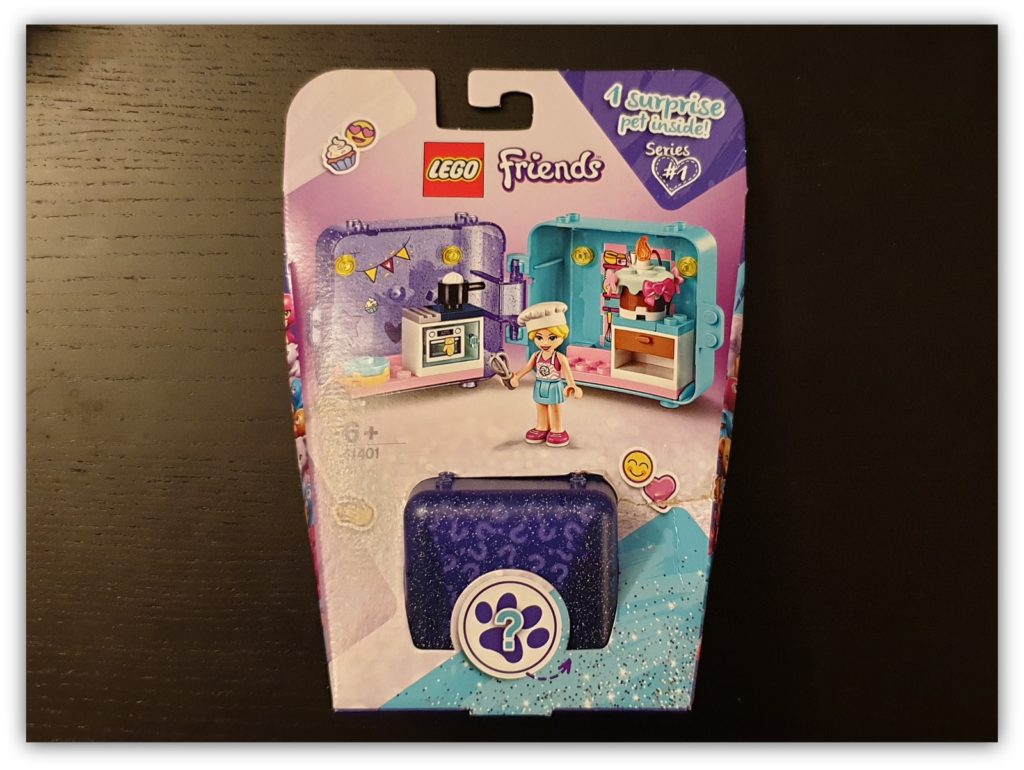 Before I get to the pod that inspired me to write this article, I noticed that the LEGO group had released two series of pod sets for 2020; the other being a Friends series of five pods.  I bought set 41401, Stephanie’s Play Pod (Baker). The other play cubes in the series are:

I also noted on Brickset that there is a further five to be released covering a sweet shop, cinema, pet shop, beauty and toy store. 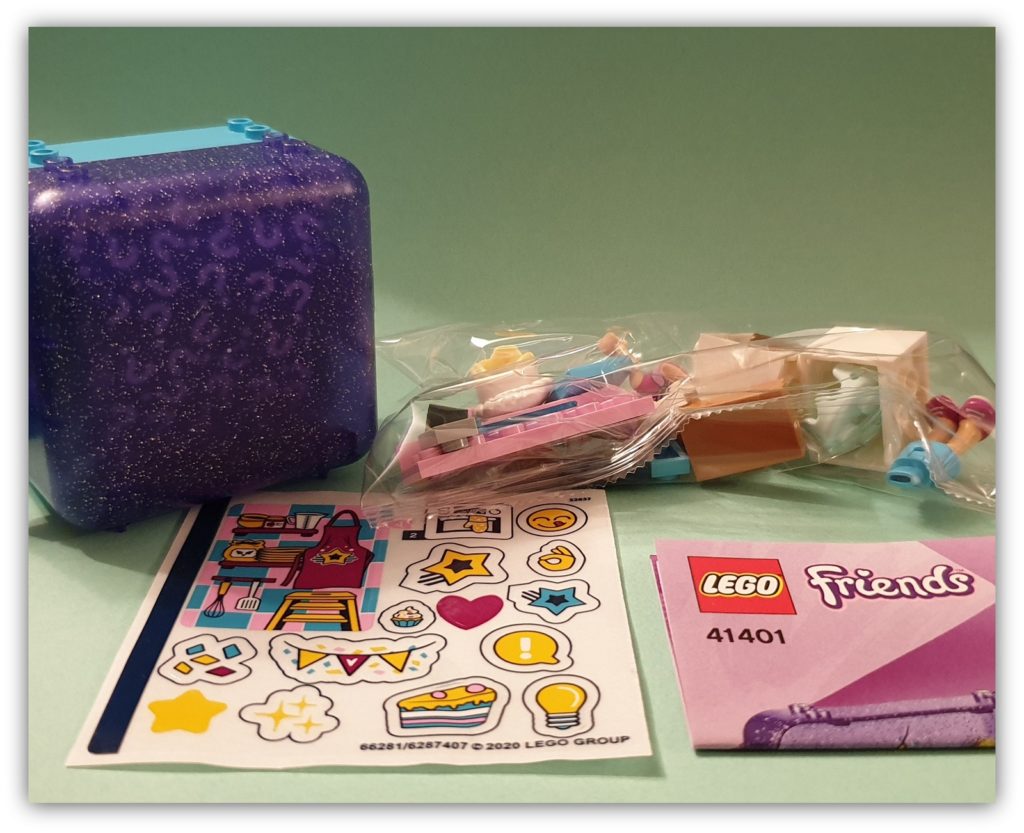 This is much squarer than the training pod, and less studs inside.  Instead, there are two 2×6 plates upon which you build your scene and the figure stands on that.  You also get “fun” stickers to liberally apply to the surfaces. 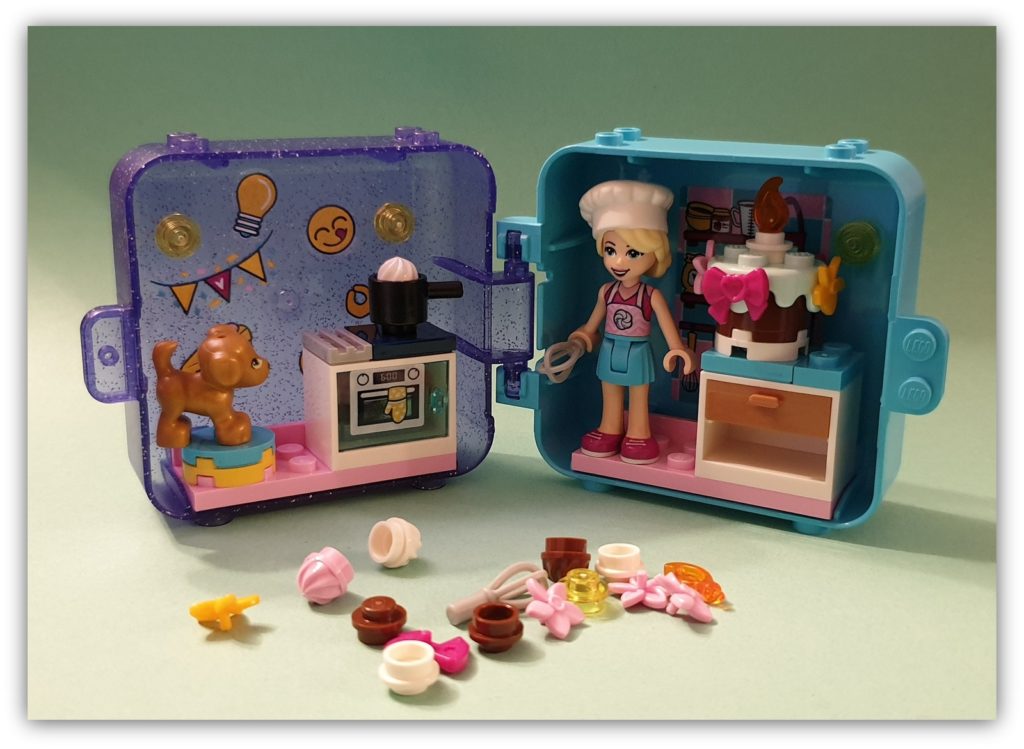 This set up works in providing a portable play scene to work with (albeit a very flat one). I’ll be applying my creative hat to this because I’m sure with a little ingenuity (and some paper and pens) the background can be made to work better; I may even have a go at creating a play pod for my Edgar Allen Poe figure! .  However, from a “carrying a figure and its accessories” point it works, but there is a lot of space to fill.  That said, I know I’ll keep an eye out to see when the next sets are released; as I said the potential for a portable play scene sounds brilliant. 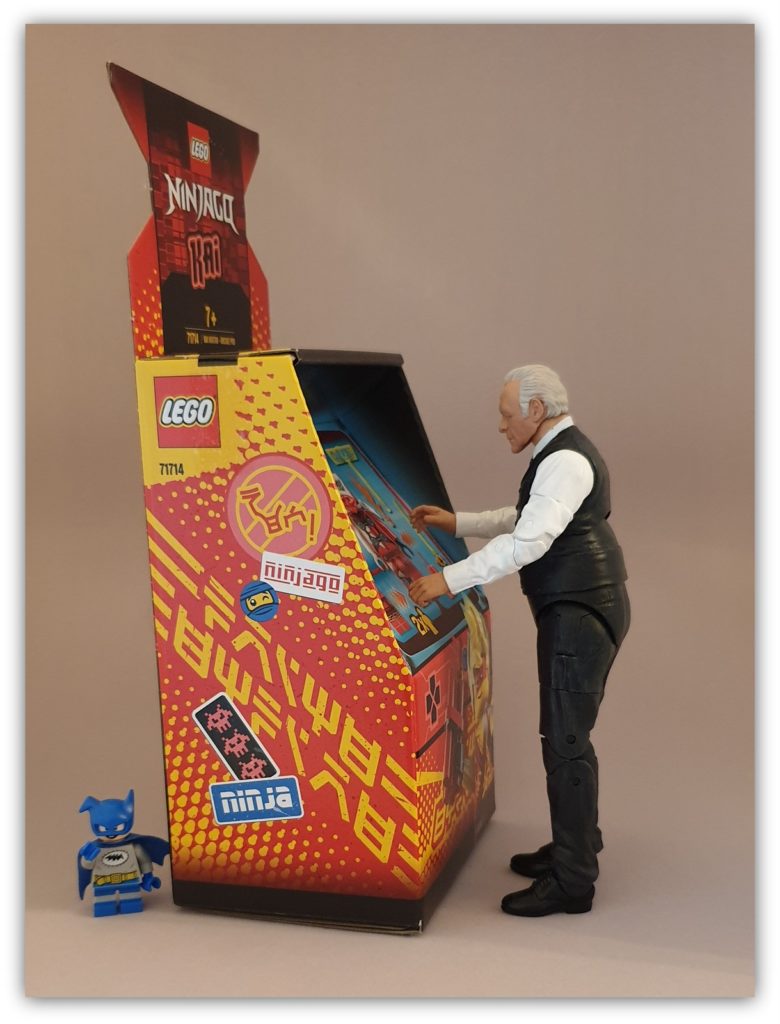 As I noted earlier, LEGO have released two pod sets for 2020; the other set is the Ninjago Arcade pod.  There are only three in this series, Kai Avatar, Jay Avatar and Lloyd Avatar.  Each has its appropriate colour scheme (Kai is red, Jay is blue, and Lloyd is green).  The box it comes in is huge, but then the pod is not an insignificant size either.

I love the fact that this looks like an arcade machine, but there is a “but” to this.  Given what I’m writing about, there isn’t much space to put much in the way of accessories (although this is designed to fit two figures comfortably) and with the additional bricks on the outside you do run the risk of losing some of the arcade.  Additionally, the large stickers that you must apply are quite a challenge to line up.  It does have some additional stickers that you can apply randomly (why would you want to do that though?), but I think that this pod is more for display than for carrying about with you in your school bag (or office briefcase!)

These pods are great and even if I didn’t sound wholly positive on the arcade pod, it’s probably because in my mind I’m thinking about how I could use it.  I will happily admit that I carry toys in my work bag; if I get the opportunity to take a photograph “in the wild” I will do so. It gives me a very different perspective of the world as my second thought to anything is “how would that look from a LEGO minifigure perspective?”

As I noted before, if you are planning on carrying figures around with you, especially if you want them to have accessories, putting them into some kind of container makes sense.  I wanted to think about small scale; I know that some toy photographers will carry large plastic containers with many, many figures, but sometimes just having the one favourite will be enough.  You could use a small plastic clear sandwich bag, and there are smaller bags that will serve that purpose, but here are a couple more suggestions. 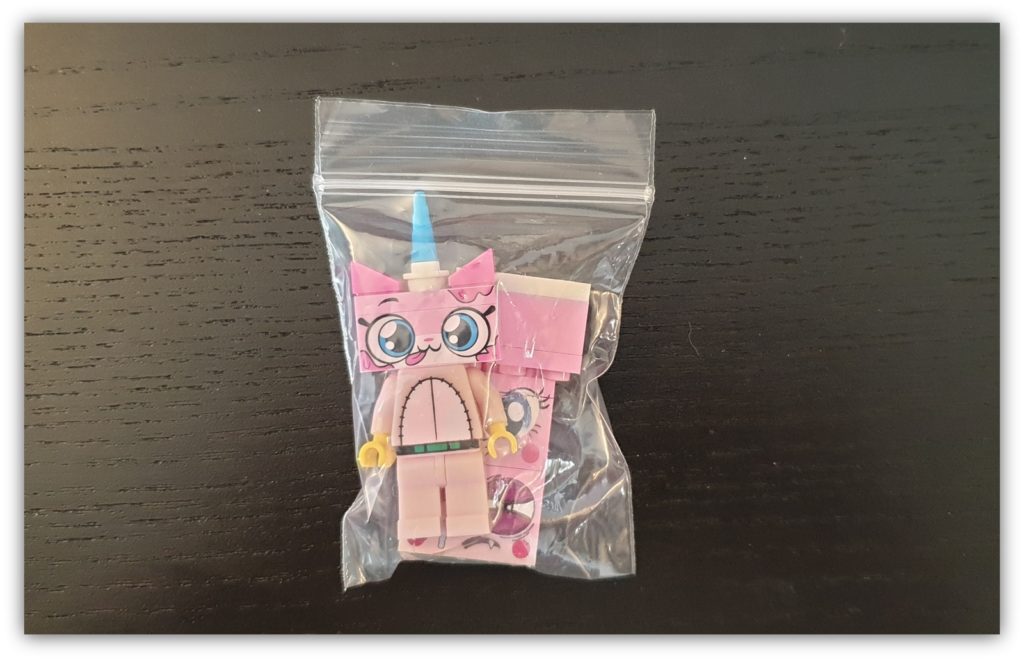 Growing up in the 1970s and 1980s there seemed to be a thing about how much stuff you could fit into a small matchbox (to be fair, this is pre-internet, so the interests were a little different!). That said, this scale is perfect for a pocket carrying solution! My own version of this solution is a small metal tin that I bought a few years back. I glued a 3×4 base plate to the back, so the tin can be used as a stand and I lined the inside with a sticky felt. It will fit one minifigure and a load of accessories.  I thought that this would be more robust than a cardboard matchbox!

Of course, you could always build your own LEGO pod if you have enough bricks. However, much as that is a wonderful idea (and very LEGO!) unless you glue the bricks it won’t have the resilience of the examples that I have listed here.

So that’s a few examples of toy carrying solutions that I’m aware of. Of course, I reckon that there must be other carrying solutions out there, so what are yours? It may be that something you do may be even more useful and robust. Let me know in the comments!