2020 is almost here, and my, do we have some awesome LEGO sets waiting for us in the coming year! Not only we have the continuation of existing themes, such as Ninjago, City and Star Wars, but we also have some new ones like Minions and Trolls. So let’s take a closer look at what awaits us in this small (!) list of 2020 LEGO sets that have been announced since now. Oh, and before I start, I’d like to thank Brickset for providing these images I’m about to use here. It’s always a pleasure browsing through their incredible database of sets and figures.

Needless to say, these aren’t all the sets that are announced. I just picked some of my favorites.

Yes, I’m starting with my most favorite new theme, the Storybook sets. So far, three of the sets have been announced with images, with the fourth (Frozen) lacking a box image. By looking at the images, I sense that they’re a mixture of System, Friends and Duplo. The proportions of the figures included are certainly new, and resemble the Duplo figures very much with those big heads and eyes. However, the shape of the heads look like the Friends minidolls, and they are probably the same size, too, if the alternate hairpiece for the Beast is any indication. Maybe they’re just shorter versions of the minidolls with larger eyes? While I’m not a huge fan of minidolls, I will definitely be getting all these Disney princesses and princes included in the sets – they’re just too cute to pass by!!

Speaking of Disney princesses… I have to say I’m happy to see the Owl from Sleeping Beauty come to life in LEGO form, along with having Pua in what appears to be a relatively smaller set. And hey, we even have white poop included!

Not being a fan of minidolls definitely doesn’t mean that I don’t appreciate the variety, color scala and parts Friends sets brought to our collections. How can I not? I’m this close to creating my own zoo because of them!

However, I’m not talking about these Magic Cube sets because of their parts or animals. You see, LEGO has already done something similar with the “pod” sets before, mostly in Ninjago and Friends sets, but also in other themes like the LEGO Movie and Star Wars. I just love the idea of creating a world that can fit in your pocket without the parts ‘breaking’ off. The new Magic Cubes seem to be slightly larger than the pods, meaning that small world has even more detail now. Besides, who can say no to a surprise pet, right? 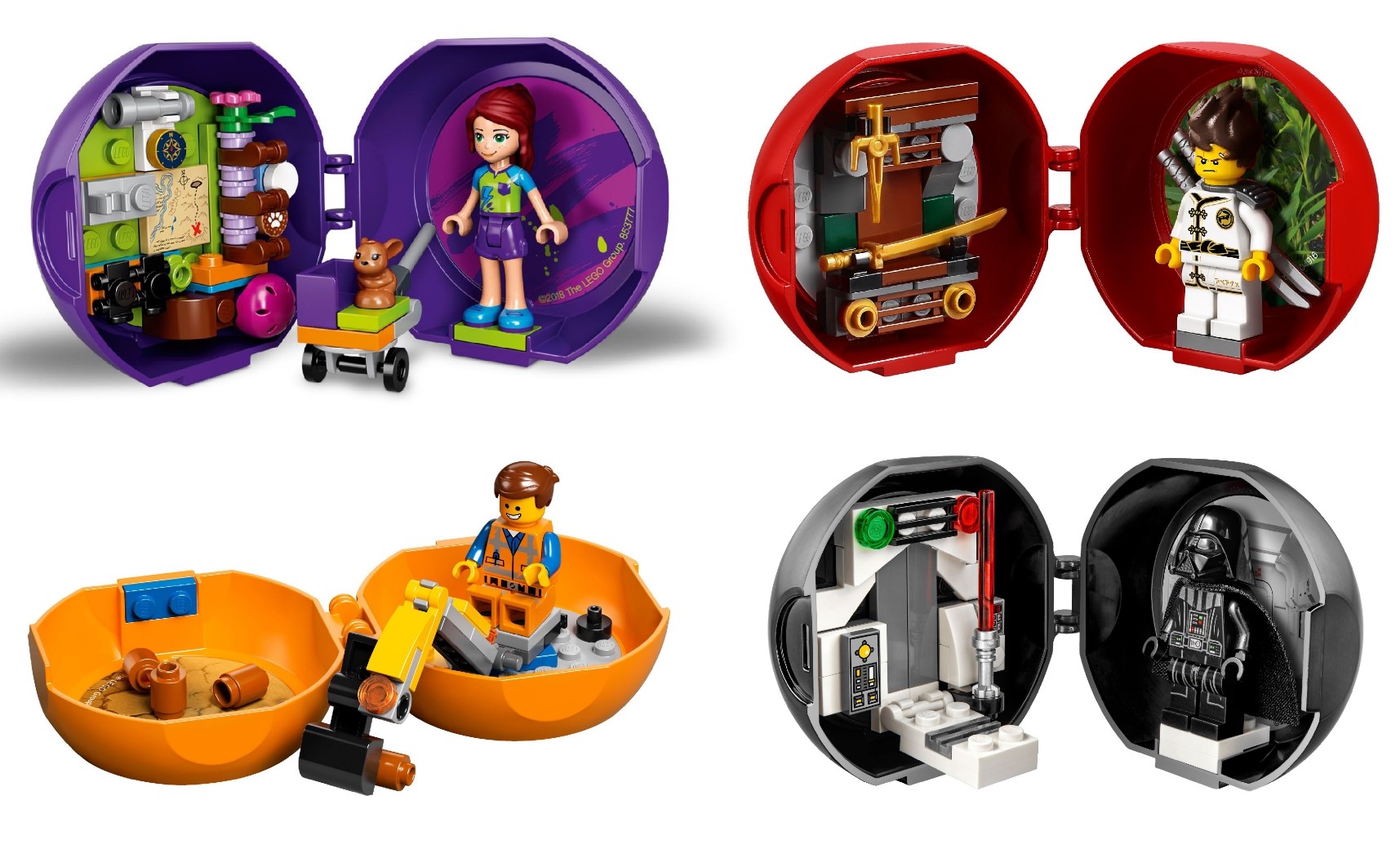 Five of the ten announced sets have images right now. Personally, I think these will be a hit and they’ll quickly become popular among both girls and boys. I mean, boys can be photographers, vets or cooks, too, can’t they?

At the time of writing, mostly Police and Fire sets have been officially announced. With images, I mean. I have to admit, over the years, I lost a bit of interest in LEGO City sets. Most of the minifigures looked very similar to each other, and being a collector of minifigures, many of them haven’t been found worthy to be in my collection. There were a few I got just to keep up with the times and all, but that’s it.

Now looking at the few of the images released, I can easily say that’s about to change. First of all, there’s Freya McCloud. I know, I know, she’s not new, but she’s managed to become one of my favorites, most probably because her hairpiece reminds me of Barbara Gordon from the LEGO Batman Movie. However, knowing she’s the chief of the fire department is definitely a plus. She’s followed by Clemmons, who, judging by his face, is definitely new here, and then Daisy Kaboom. That name just makes me smile. Yes, she seems to be the explosive specialist of the breakout at police HQ. Not only that, but, wait for it, we seem to be getting a almost brand new bulldog figure, too! Or is it a pitbull? Either way, we’re getting a new dog, ladies and gentlemen! 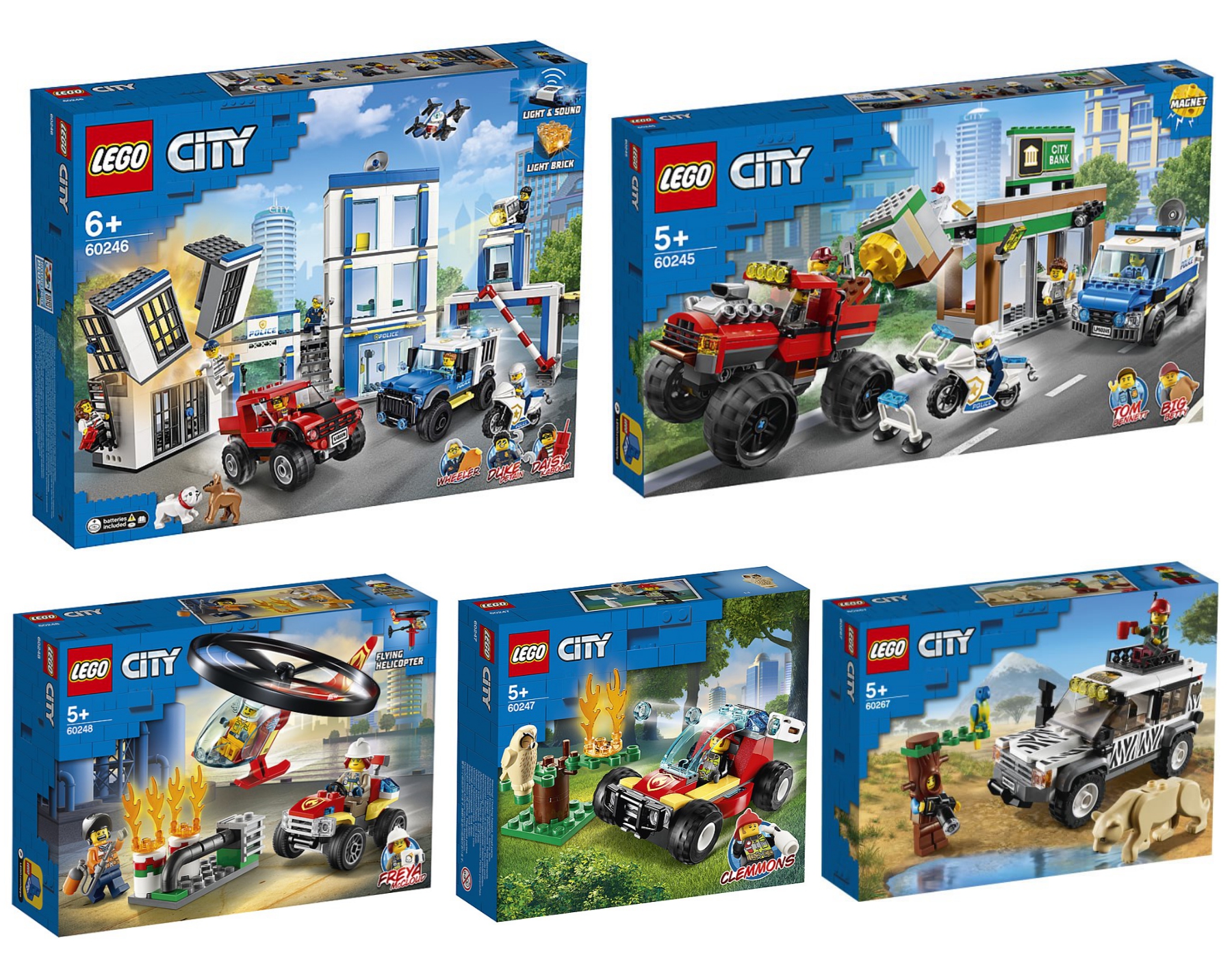 Hold on, I just realized this… there’s a little note on the top right corner on a few boxes saying “Flying Helicopter”. Does it mean… can it mean… oh my goshness, I think the small helicopters included in at least two of the sets really do fly! Wow! Talk about exciting City sets!

Apart from all the new animals and minifigures, one thing strikes me the most in these City sets, and that’s the variety in gender. Not only we have a female fire chief, but we have female cops and criminals as well. It seems letters written by little girls have finally been getting through.

And did I mention the new lioness we’ll be getting? It seems the big cats collection grows yet again!

As a kid, I loved Trolls. I had a few of them, but the first one I got was always my favorite. She had a colorful dress and a small backpack, which I stocked with peanuts (without my mom knowing, of course). When the movie was released a few years ago, I have to admit, I was pretty excited. I can’t say it was a let down, but I didn’t like it too much either. However, when I look at the recently released images of the sets, I can see how they’ll be a big hit. I admit that having the hair – which, in my opinion, is what Trolls are all about – in plastic is a bit disappointing, but hey, this is LEGO. Besides, there are so many new and cool bits and pieces, and I can’t wait to get my hands on them!

If you’ve been following the blog, you probably guess from the lack of my posts on Star Wars that I’m not a HUGE fan of it. However, two of the upcoming Star Wars sets got me really excited. One is the brick-built Bantha, which I think is the cutest thing since the brick-built Dewback, and the other is the Sith Troopers. I have to admit, they look pretty handsome in red.

I’m sure we’ll be getting many more Star Wars sets, suitable for both minifigure collectors and builders, but for now, only these two make my 2020 LEGO sets list.

I stopped watching the animated series after the LEGO Ninjago Movie. I was disappointed in the film, and even though I liked the series, I didn’t feel like watching it anymore. Because of that, I don’t know who did what or went where and so on. However, the following three sets look really interesting to me. There are only three announced at the moment, but all of the gang will probably have their own arcade capsule. Even if you’re not into Ninjago, they can easily be a part of the entertainment section in your city.

Last year’s Chinese New Year sets were good, but I think LEGO has really outdone itself this year. The Temple Fair set looks so festive, I want to shrink myself and enjoy the festivities along with everyone else. There are so many small details spread here and there. The trees, the lanterns, the fireworks… not to mention the beautiful temple build. And the Lion Dance set… wow, just wow. I love the lions, but the legs below indicating there are minifigures inside? You have to admit that LEGO pays a lot of attention to detail. And it seems we’ll be getting another animal costumed minifigure, too! Hey, maybe it will appear as a variation in the CMF Series 20, huh? 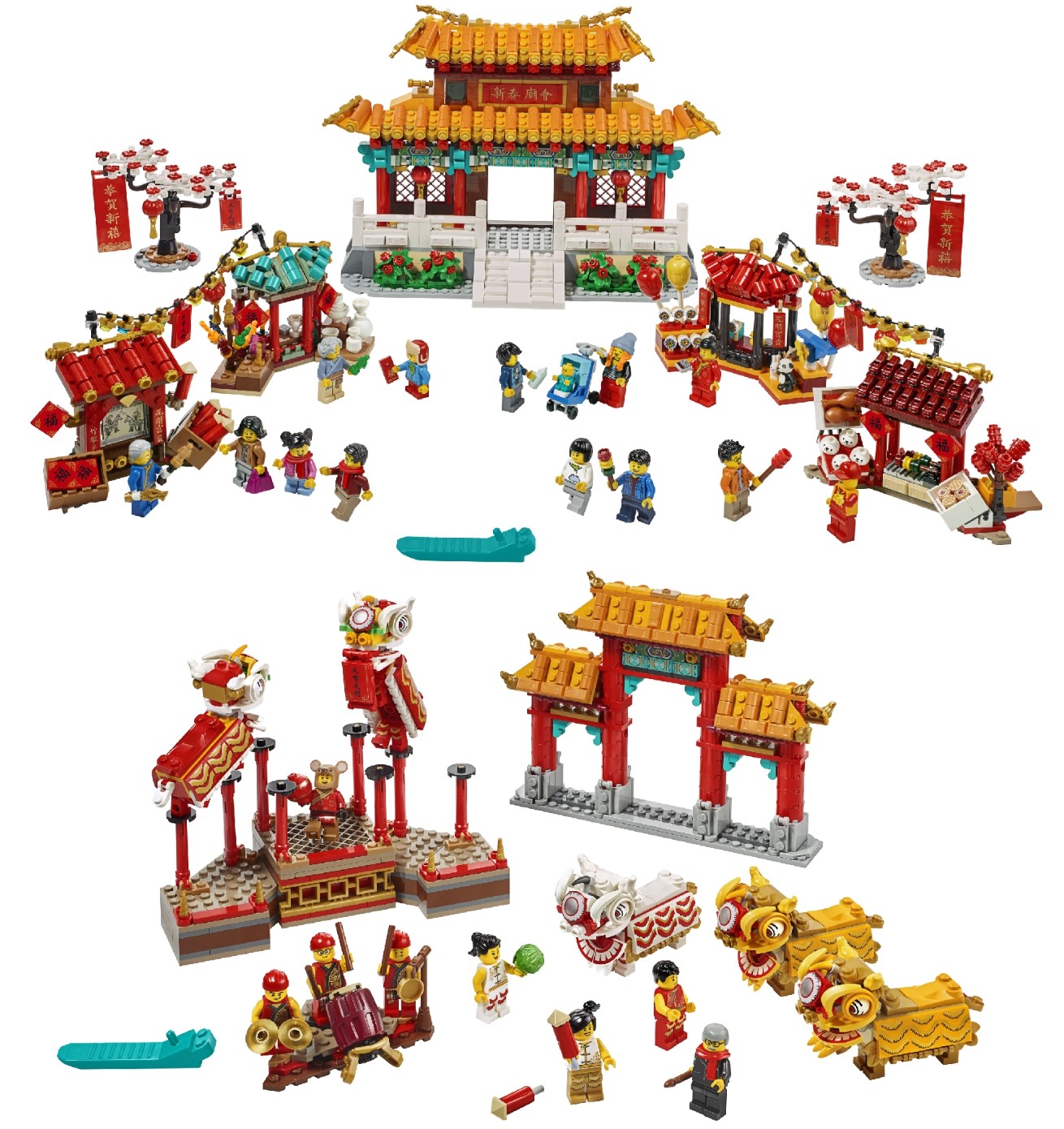 Speaking of the CMF Series… any guesses as to what we’ll have? There will probably be a beautiful (and super rare) minifigure similar to Mr. Gold. I’m not too happy about the idea of a special minifigure, since many collectors won’t have a chance to get it without paying loads of money for it, but with all the new moulds and parts, I’m sure the overall CMF Series will be really special!

These are just a few of the announced LEGO sets we’ll be having in 2020. I’m sure there will be so many jaw-dropping set announcements as time passes. Don’t forget to check our blog regularly to see news and reviews about them, and keep an eye on Brickset, their database really is extensive, and they get their hands on released images before many others.

So tell me, which themes or sets are you looking forward to the most? Are you, like me, excited about the minifigures only (or mostly), or do you have plans to add some of the builds to your city? What would you like to see among the 2020 LEGO sets? Let me know in the comments!