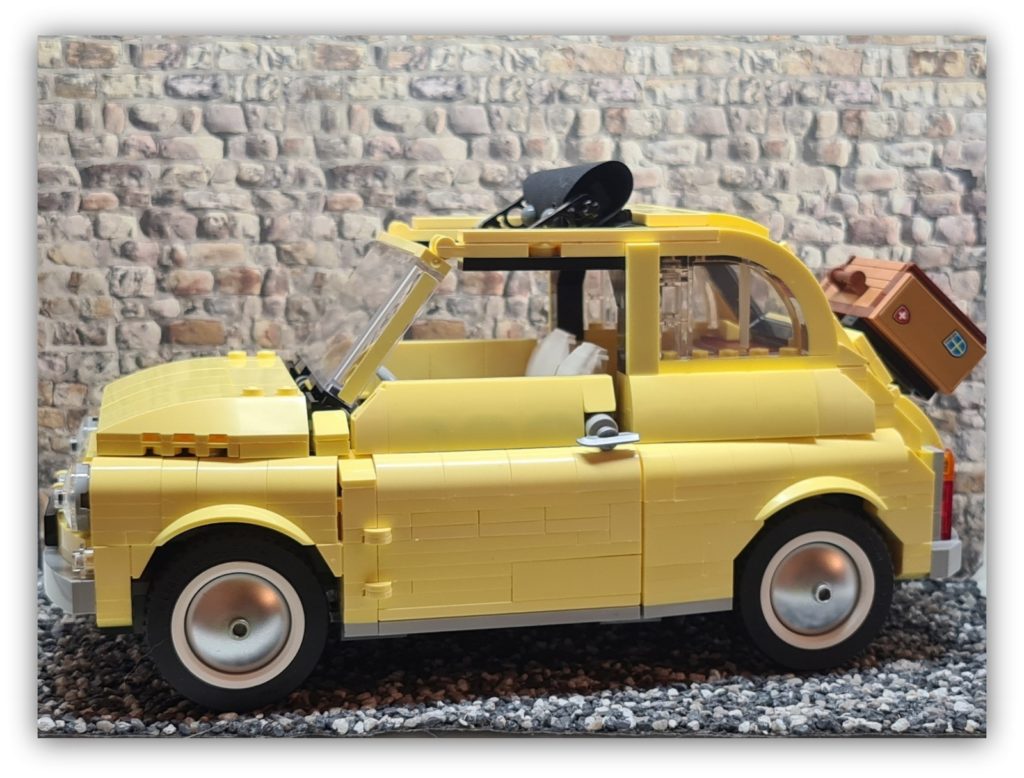 One of the cars that I have owned was the modern Fiat 500. It was a fun little runabout, even if it did have a really small boot space; for the most part we drove around with the rear seats folded down. Additionally, my “go to” car in the game Forza Horizon 4 is the Fiat 500 Abarth. All this preamble is to show that it was a foregone conclusion that I would end up building the Fiat 500 that LEGO released. This article isn’t a blow by blow build review, but a review noting some of the fun and quirky aspects of the build.

Opening the box up you will find nine bags; these are numbered 1, 2 and 3 referencing the three stages of this build. Additionally there is another bag for the fabric sunroof and another for the instruction manual and stickers. Yes, there are stickers; more on that later.

The instruction manual effectively falls into two parts; the build guide that we would expect; but the first section is given to the history of the car and its evolution from the Topolino (1936-1955) through to the modern Fiat 500 (effectively 2007 to the present day). The version that the LEGO model is based on is the Fiat 500 F which was sold between 1965-1972.

The engine and the build 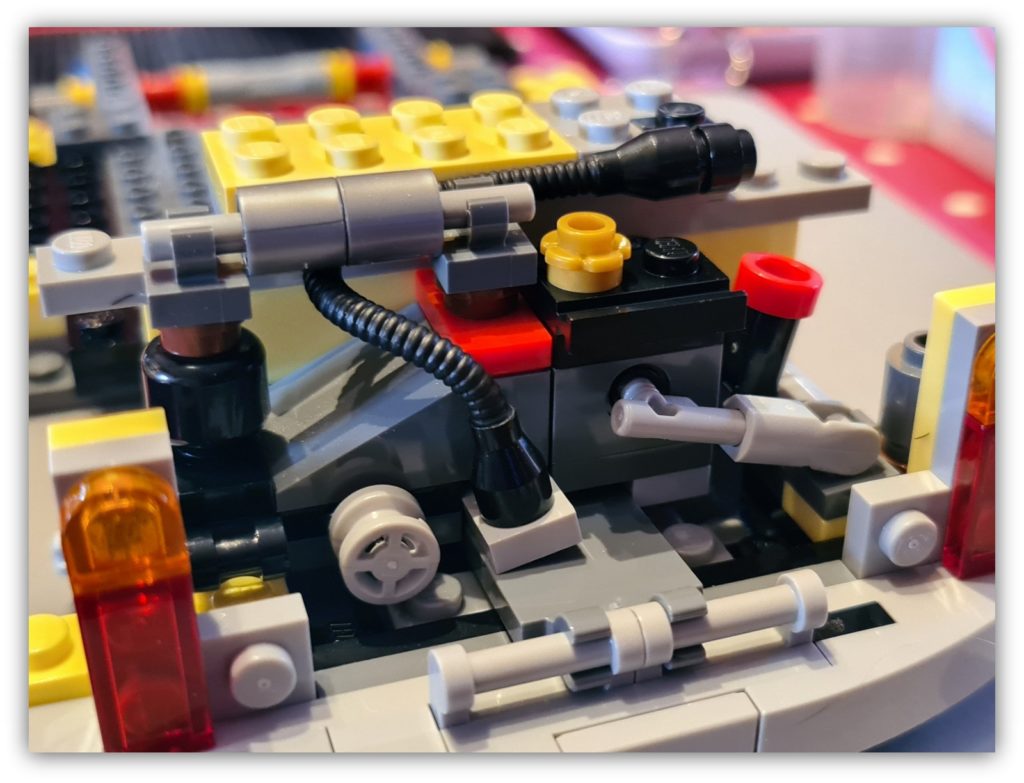 The build makes use of a lot of SNOT (Studs Not On Top) building techniques; so quite often I was wondering what I was building until it was correctly oriented an fixed to the vehicle. I don’t know if this was exclusive to my building, or whether this is as expected, but the flexible pipe caused me a few challenges. You can see the 2×1 plate is at an angle as the pipe tries to straighten itself. I did find that I detached the rear bumper a few times later in the build which meant using pliers to refix the pipe and plate.

That said, I did like how this rear engine came out. 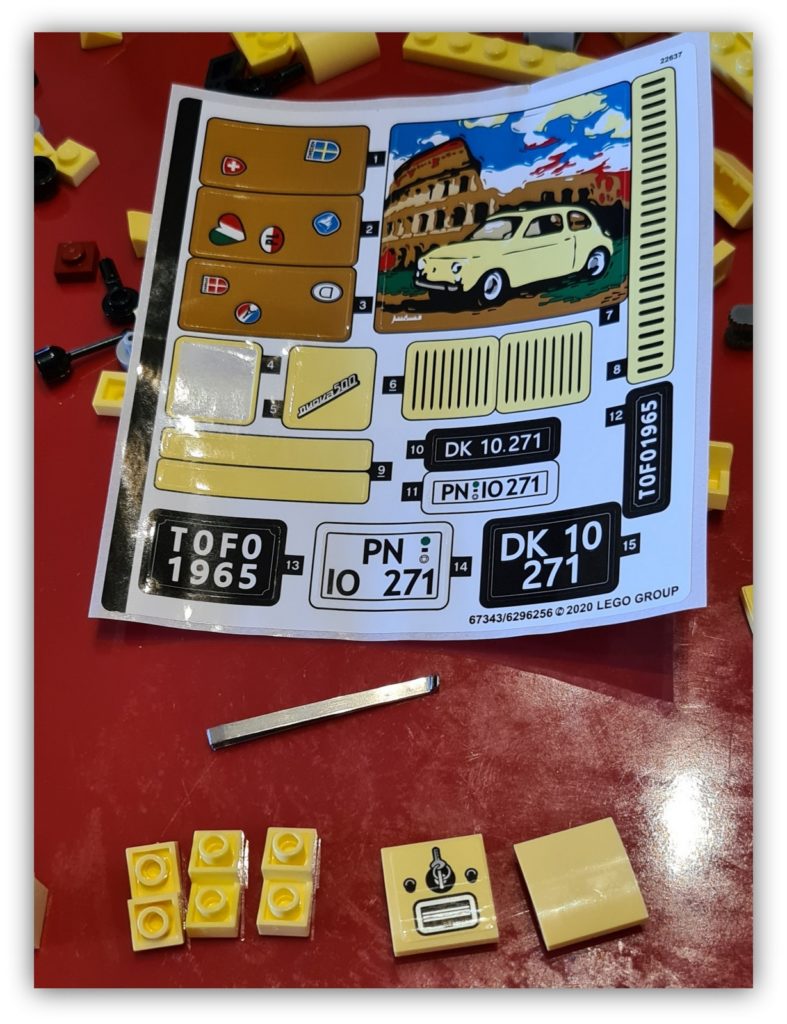 Okay, let’s deal with the elephant in the room. This set requires stickers to complete the look. That said, because of the amount of flat and curve plates in the build (there are twenty of the 2×2 curved slopes that you can see on the bottom right, and there are nine LEGO 1×8 tiles) that the likelihood of a printed part ending up in the wrong place meant that the placement of stickers made sense. It was also nice that there are three sets of number plates to choose from. 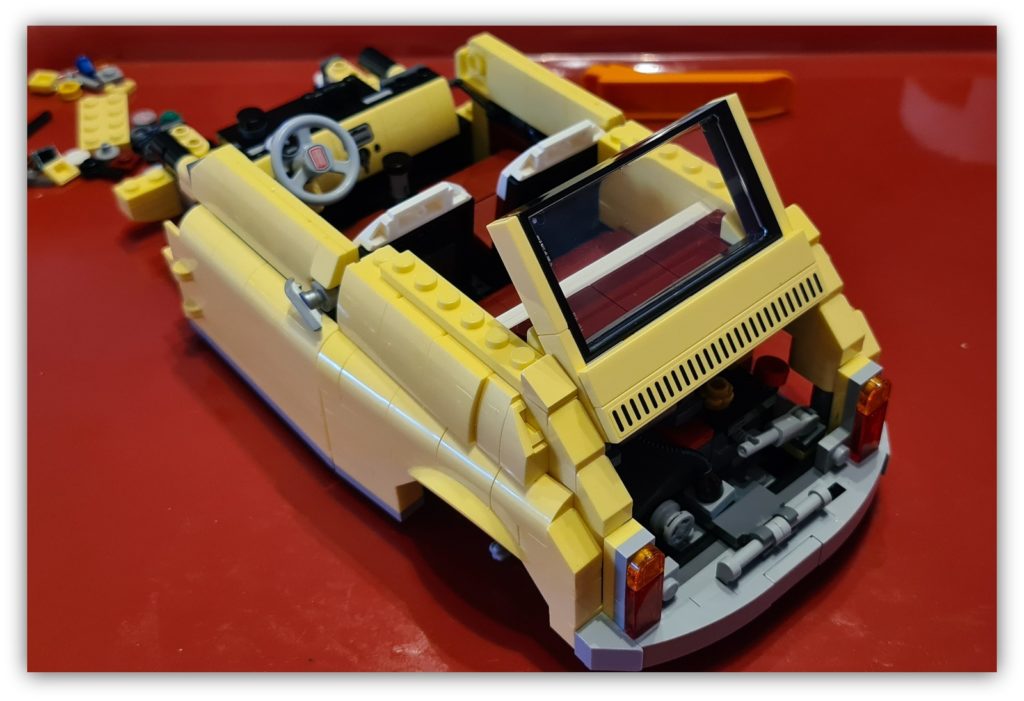 With Creator set construction there is often a “wow, that’s clever” moment and in my mind, this build has several of those moments. One of those moments is introducing a curve into the shape of the car. The Fiat 500 has always had curves to its shape, providing a softer overall look (than say the very angular shark nose of some older BMW cars). It’s subtle, but the doors are two studs wider than the front or back. This is achieved by using hinge plates to bring the front and back in. 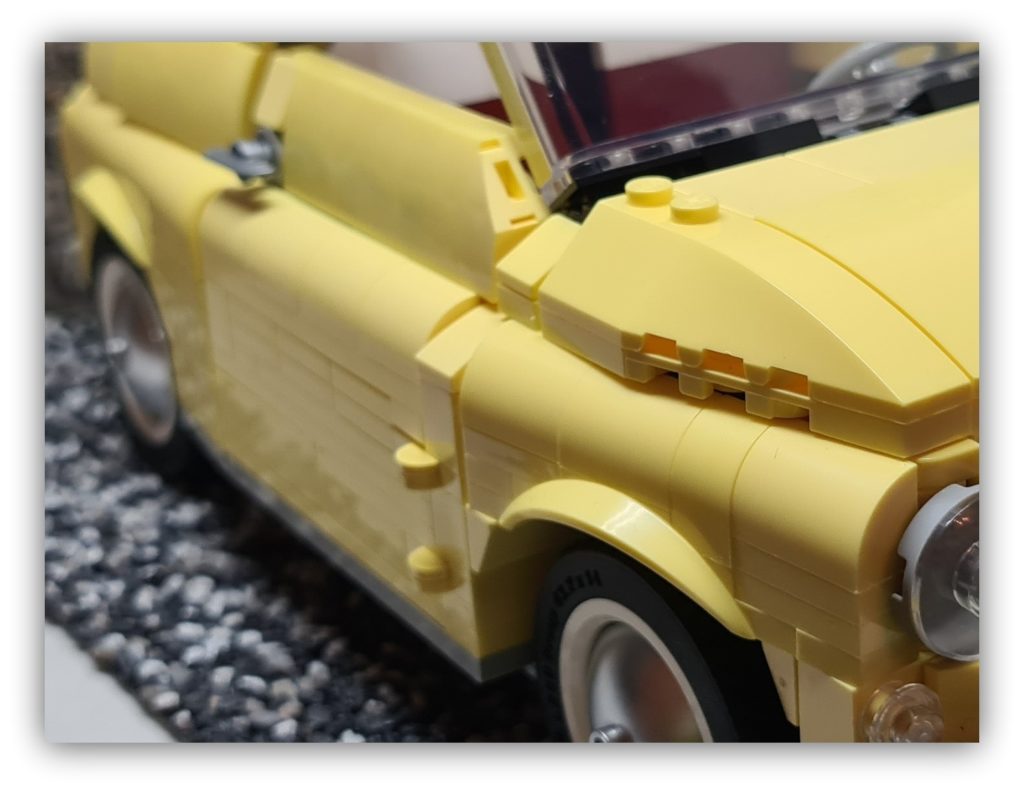 Oh, and the visible hinges? Those are for the doors.

You’re only supposed to blow the doors off!

So, if you remember that iconic line from the 1969 film the Italian Job , then you’ll probably be saying “no, those were Minis!” and whilst they were the stars of show, Fiat played a huge part in the making of the film. BMC, the makers of the Mini at the time, refused to donate any cars to the film; however, the Chief of Fiat motors offered as many vehicles as was needed; it was the director that felt that as it was a British film, it should be the Mini. However, Fiat still provided many of the vehicles in the film, as well as their rooftop testing track for part of the chase! 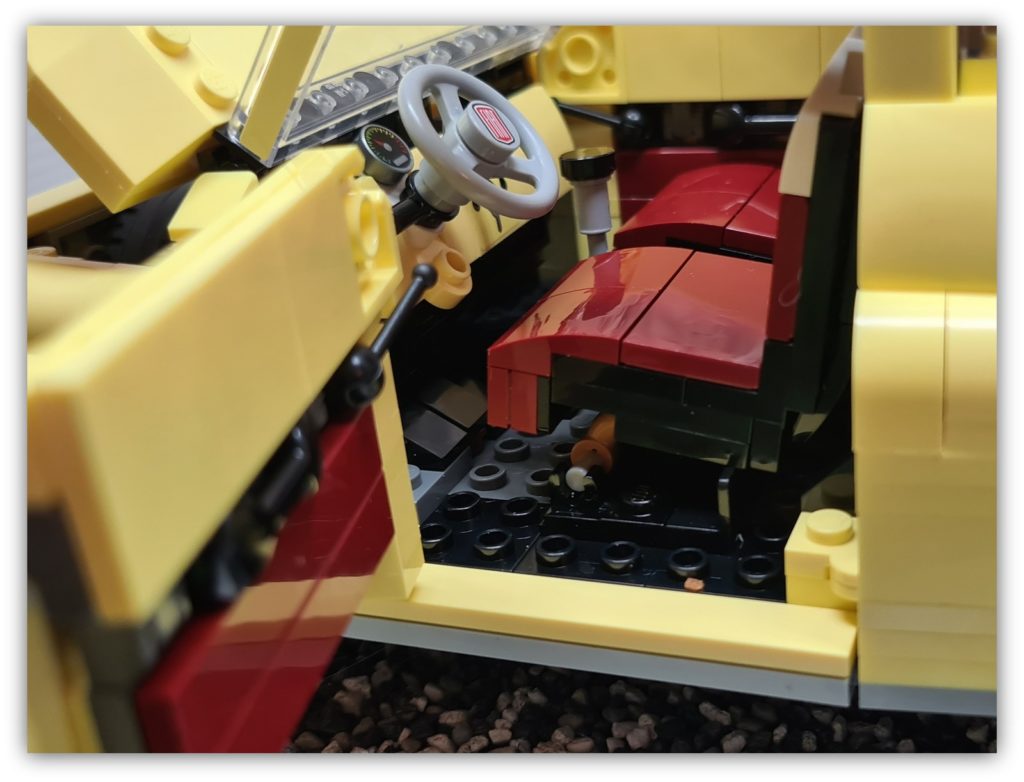 I don’t know how wide the real Fiat 500 doors opened, but in the LEGO model they fully open to swing towards the front of the car. This does at least reveal the inside handle (and I suspect the strap to stop the real doors from opening too far). On the outside, I love the use of the ice skate to act as the door handle.

So, what’s under hood? 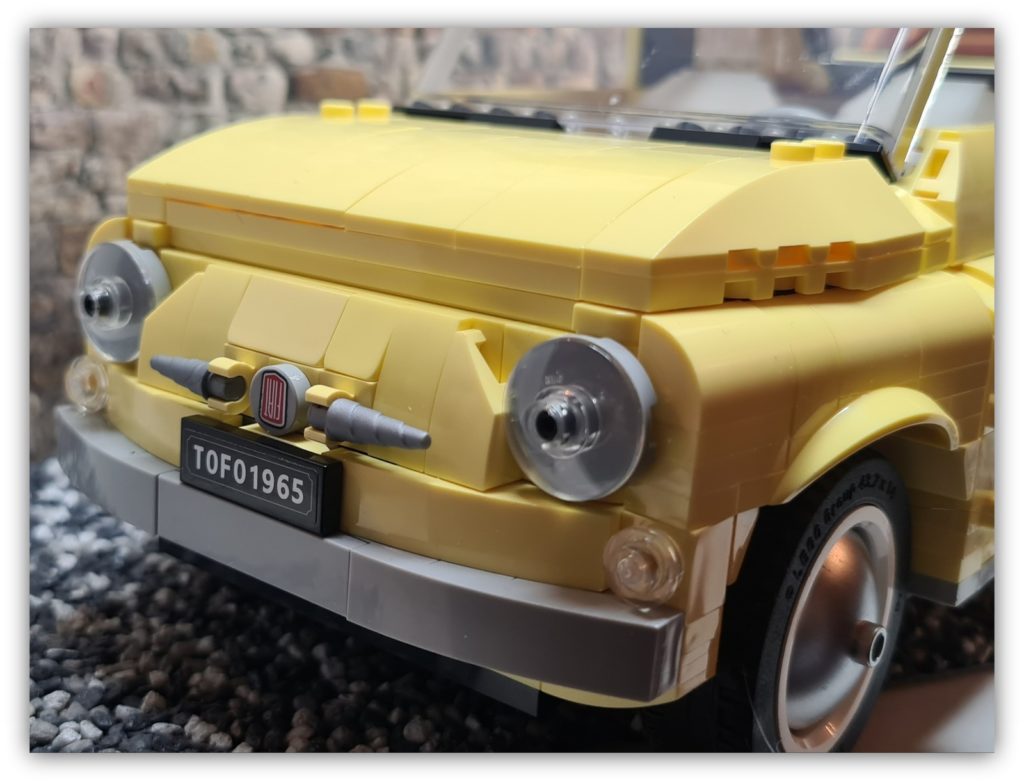 If you look at the earlier pictures, you’ll note that the 479cc air-cooled engine is mounted at the back of the car. New Fiat 500s have moved that to the front of the car. So, what’s under the bonnet?

Well, it’s the petrol tank and a very useful spare wheel, which means that apart from the back seat there’s no space for any shopping! Good job there’s a suitcase on the back! 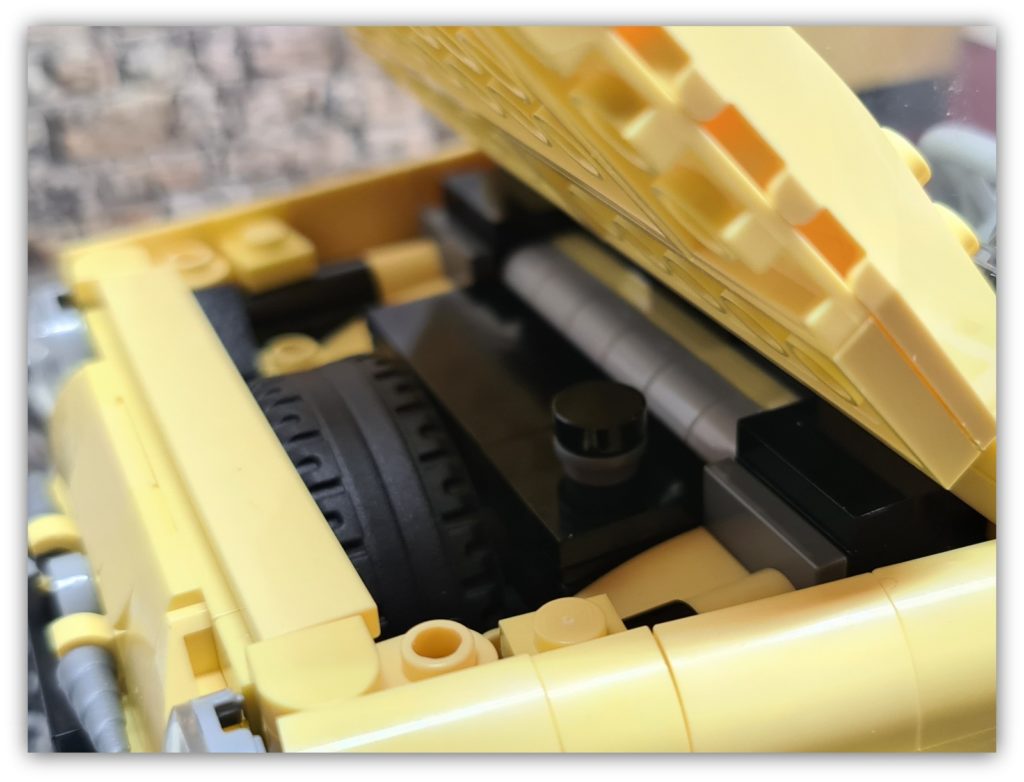 Note: It was only as I looked at the photos I realised that I managed to fix the front badge upside down!

A question of scale 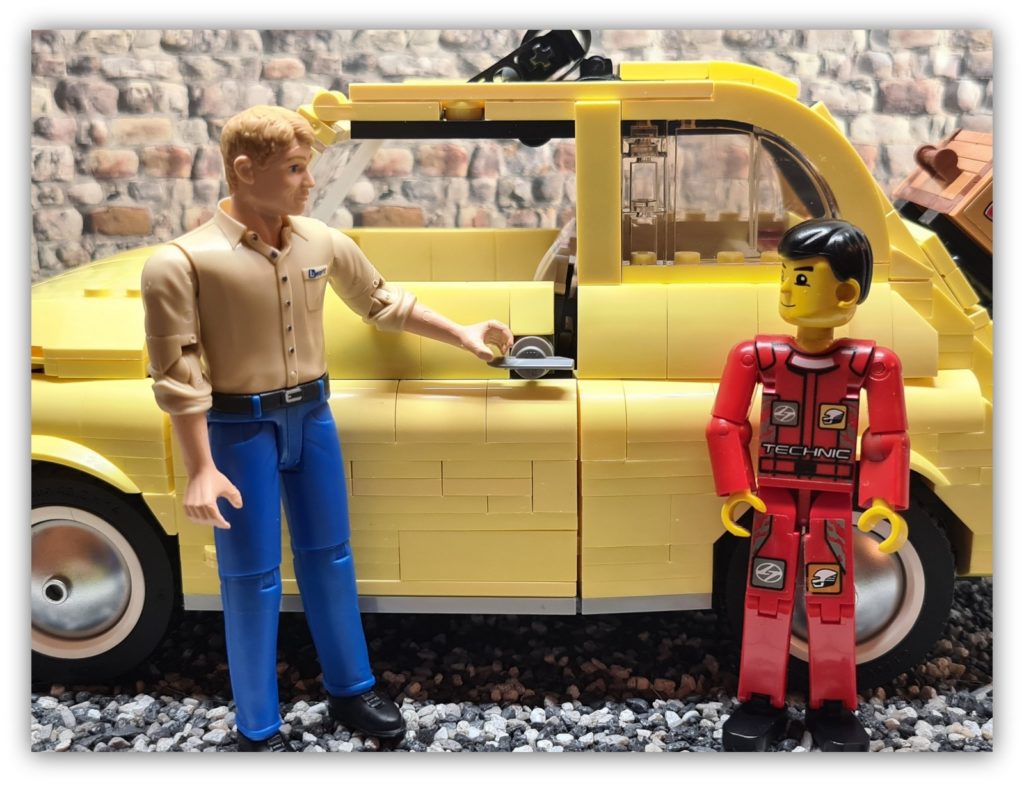 I do enjoy photographing toys, and if you read the interview with me you’ll know that my hobby extends to more than just LEGO. I had hoped that I would be able to use the car as a vehicle (if you pardon the pun) with other figures.

Unlike the London Bus (set 10258) which was perfectly sized for standard minifigures, the LEGO Fiat 500 doesn’t work with the Technic figures; in my opinion it makes them look like young people. I also found that other posable figures were too big; the only figure that worked was the Bruder man in my picture. However, there was another catch.

There’s always a compromise somewhere and in this case it is the reduced leg room in car. Where the grey studs stop there are black bricks. Consequently, I can get the figure to sit sideways on the seat; I can’t get the figure to sit IN the car. Hey ho, It can still be used for more stationary images when the weather improves.

Like the real car, the design belies the clever ingenuity to fit everything in to such a small space. Passengers get into the back seat (if it’s really necessary) by folding the front seats forward; which this model does so well.

I also love the fabric sunroof. It hinges back neatly, opening up the driver and passenger to that warm Italian sun; perfect for the drive to the Riviera.

There is a however… 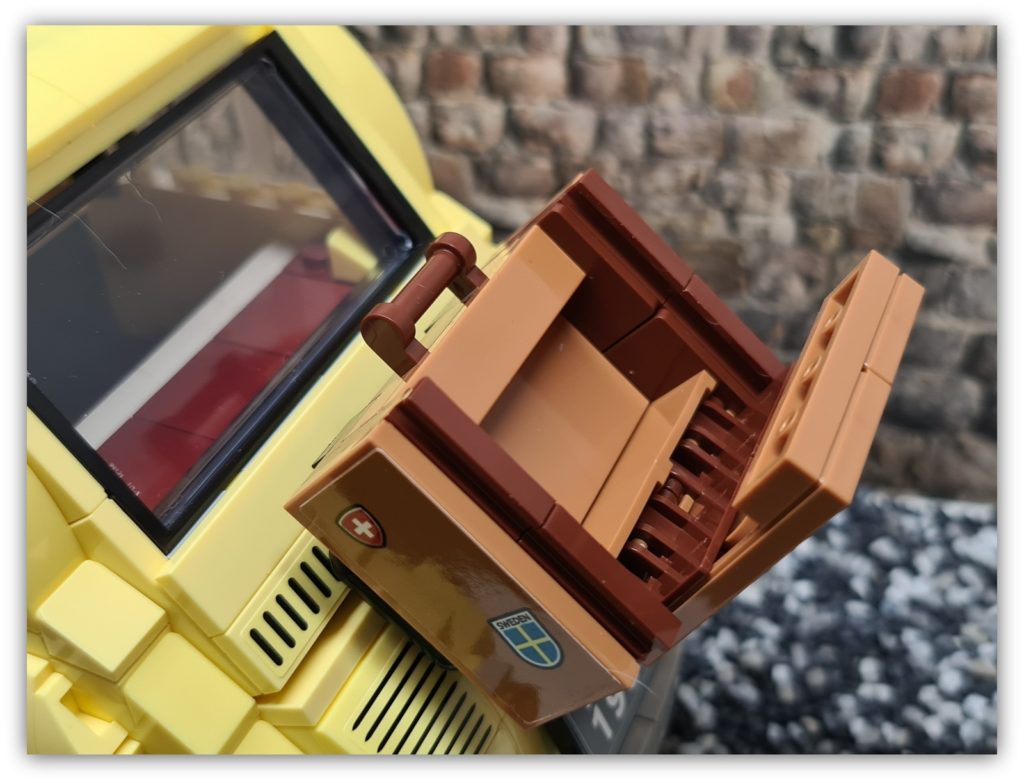 Much as I did enjoy building the Fiat, there were a couple of parts that I thought were only there to boost the part count.

The first was the suitcase on the back. It is neat that it opens, and that it fits on the luggage rack; I did like the idea that the case (and possibly the car) had travelled over Europe, but it did raise the question once more; what scale is this build to? 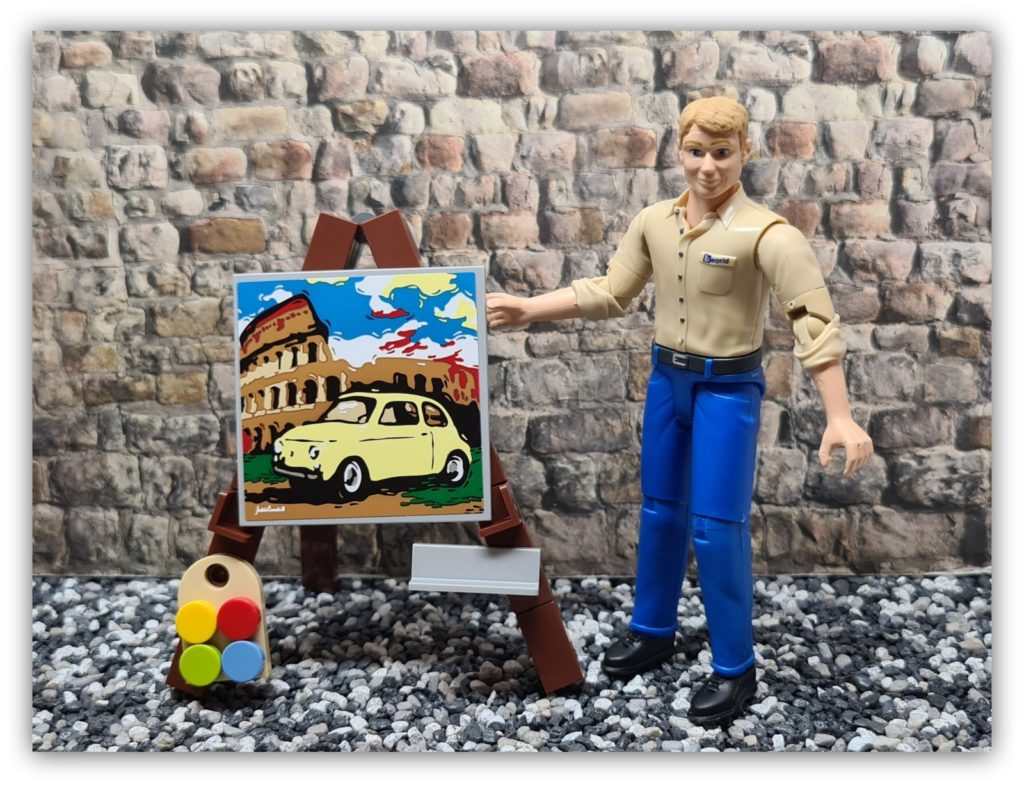 The other head scratcher was the inclusion of the painting, easel and artist’s palette. Much as having a stylised painting of the Fiat 500 by the Colosseum in Rome is a nice idea, it was 26 pieces that didn’t add to the overall build.

Overall, I think this is a very faithful copy to the 1970s classic car; if you’ve ever owned a Fiat 500 (whichever version) I think this is something worthy of shelf space. From a build perspective I reckon it took me about eight hours; however I wasn’t building quickly, just enjoying every step of the way.