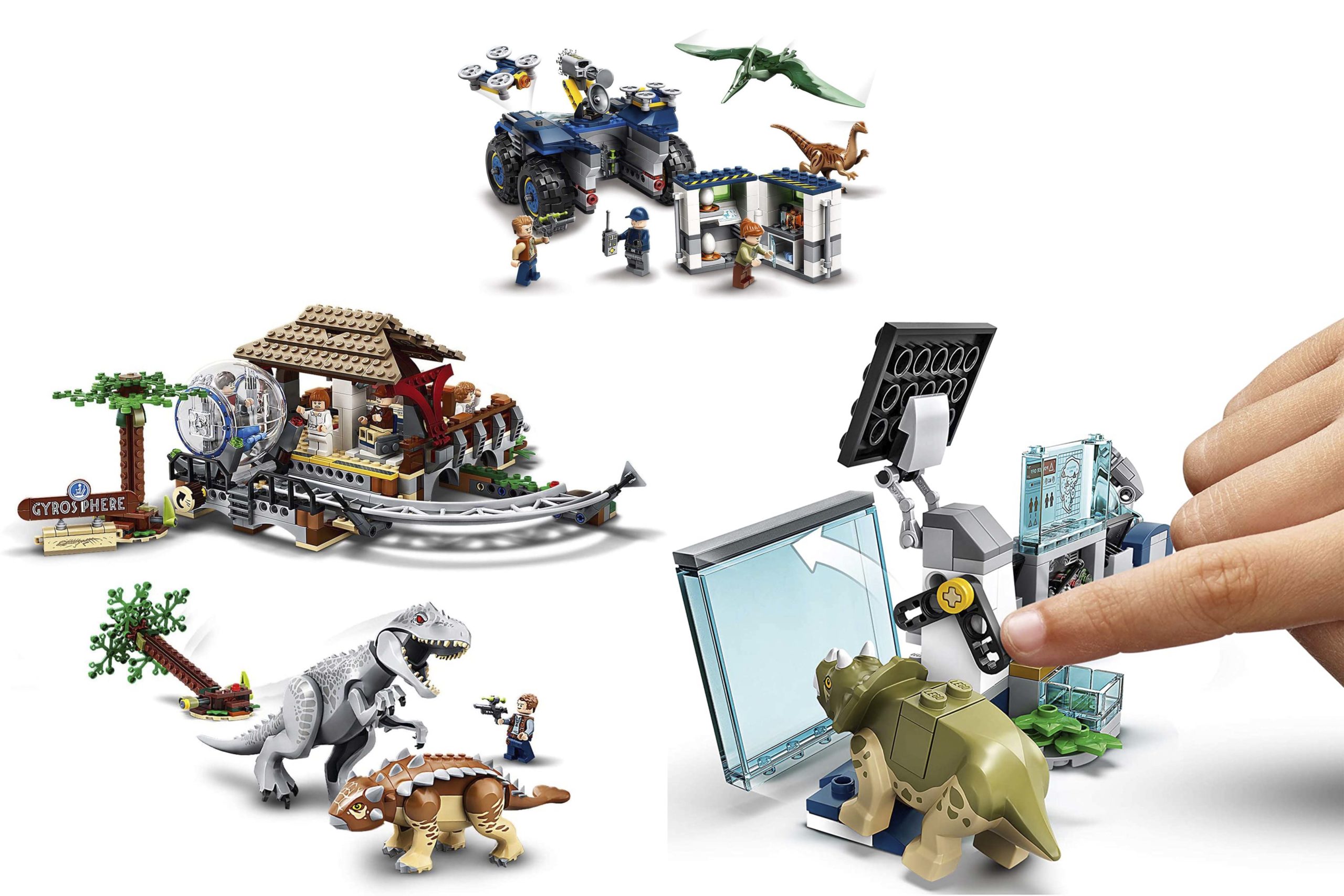 Hey everyone – I hope you are all doing well, and are keeping as safe as you can during these strange times we all find ourselves in! If you’re anything like me, then LEGO has been a real godsend during these weird days – providing a welcome distraction from the tough things we are all experiencing. With this in mind, I wanted to take a second to breakdown the latest wave of LEGO Jurassic World sets. I have a lot of love for the Jurassic line, so I am excited to share my thoughts with you!

Let’s jump in and take a look at the four sets to release for Jurassic World in 2020. 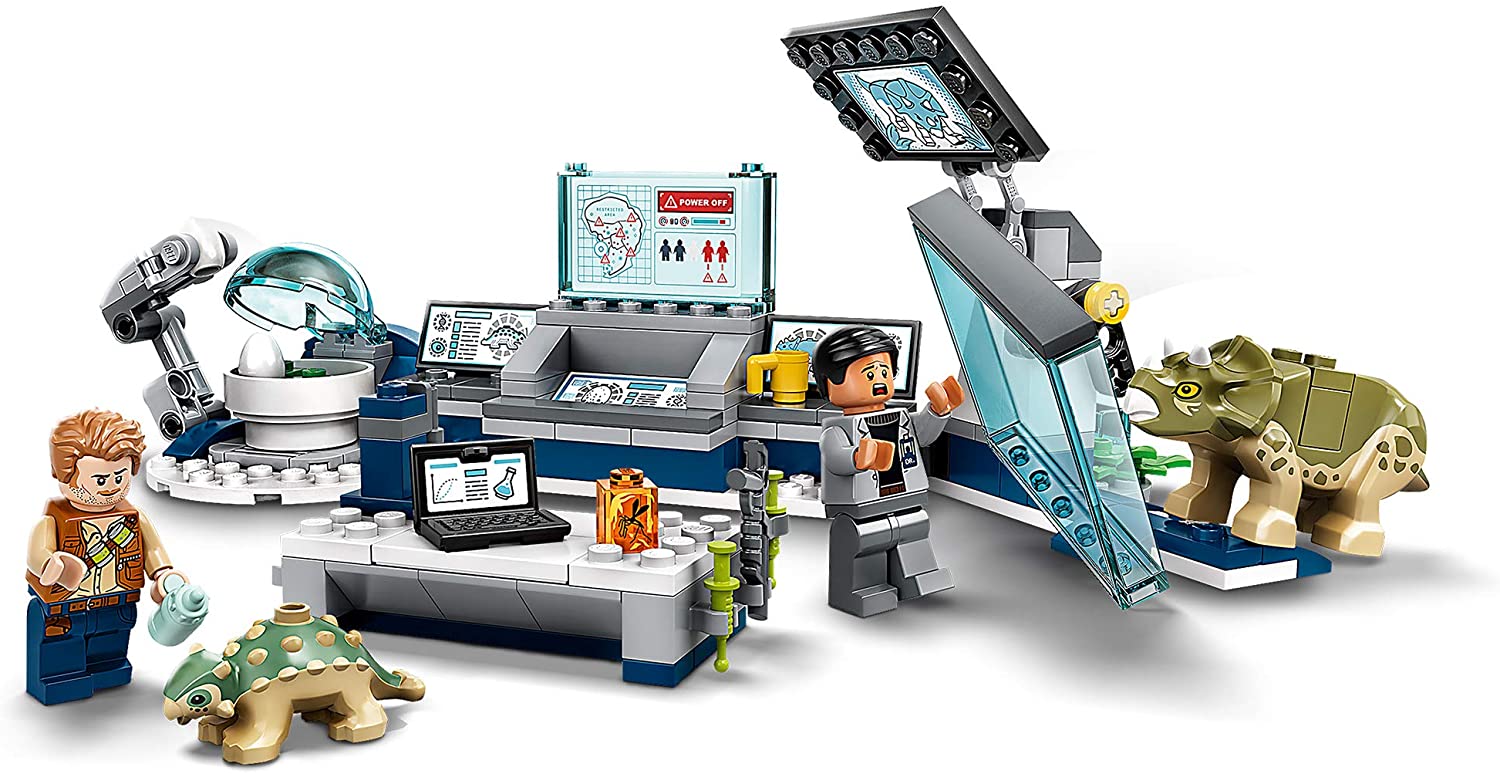 I’m going to warn you ahead of this one – Dr Wu’s Lab is arguably my favourite set to have EVER been released under the Jurassic World license, so get ready for a lot of gushing over how awesome this set is.

Dr Wu’s lab presents a truly wonderful build which encapsulates the ideas present in both Jurassic Park and Jurassic World wonderfully – with a genuinely gorgeous build which incorporates a plethora of really cool elements to help to create an authentic-feeling Jurassic set. Of particular note for me is some of the graphic design here – with an incredible level of attention paid to the stickers which are a part of this set. I love the Island Map screen which is present within this set, as it really helps to emulate the control room seen on Isla Nublar in the films.

I also love the build for the Egg Incubator, as it makes some smart and informed piece choices to create a wonderful little build which feels incredibly authentic to those seen within the films. Combine this with the fact that this set can be adjusted to be posed in different positions, and you have a great little build with a lot of detail packed into it. 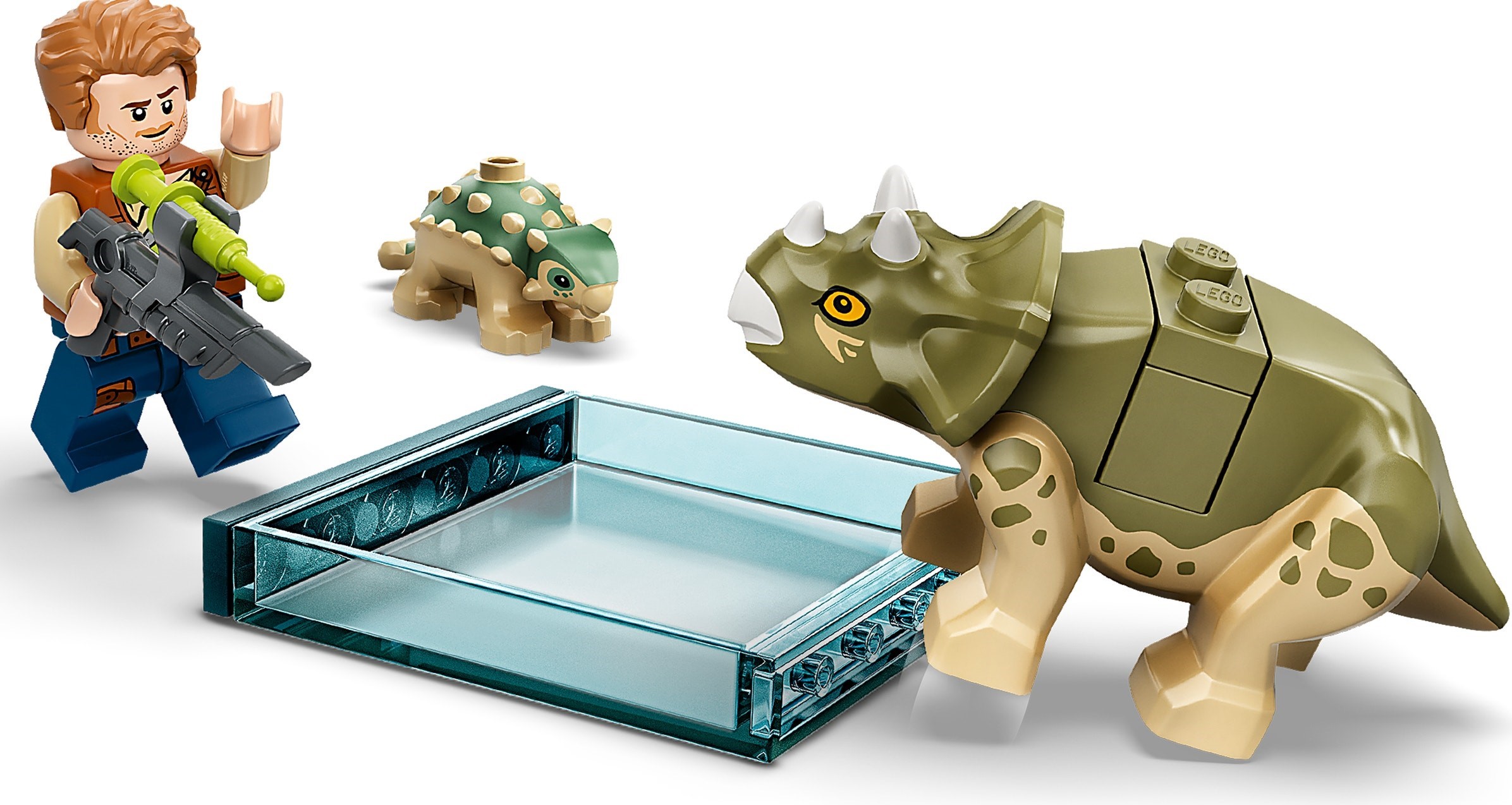 This set also incorporates two brand new dinosaur sculpts – adding more to the slowly increasing variety of sculpts we have seen in recent years. The baby Ankylosaurus is a nice sculpt, and is similar to Bumpy, the baby Ankylosaurus seen in the recently released animated series Camp Cretaceous. The baby Triceratops is also nice here – with a removable middle brick so you can place a figure riding the Trike. I would love to see this dino outfitted with a saddle, as I reckon this would make for a great rendition of Jurassic World’s petting zoo. Throw in a nice variant of Owen, and a re-pack of Dr Wu with a new face print, and you have a fantastic £20 set which may be the best Jurassic set to date. 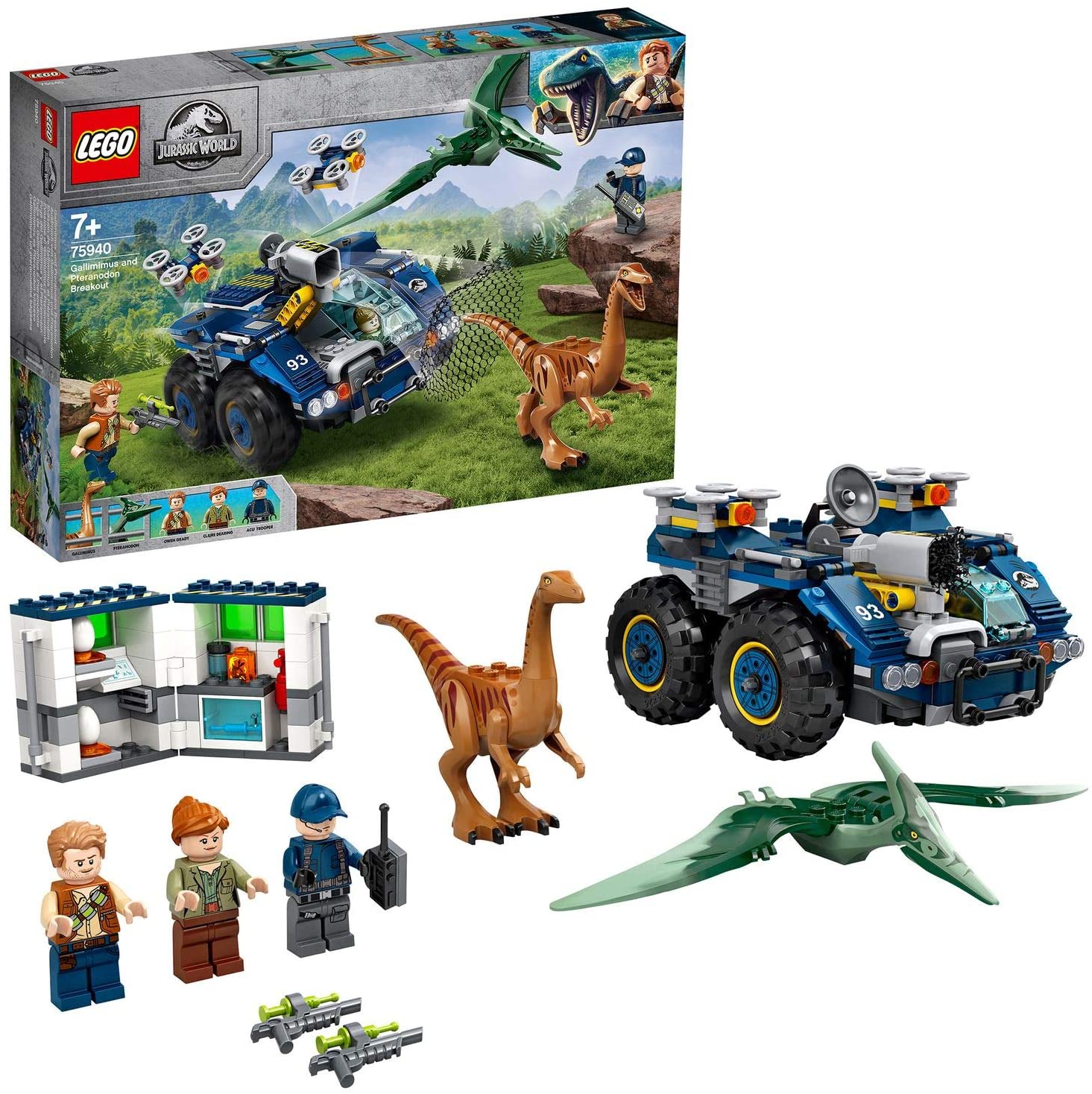 I’ll be honest with you – Gallimimus and Pteranodon Breakout

was a set which I wasn’t particularly impressed with upon it’s reveal, but this is a set which has slowly grown on me – and I can confidently say that I have since fallen in love with this line.

The build for this set is a large, 4×4 vehicle in a dark blue colour scheme. The vehicle itself is very similar to the RC Batmobile we got fairly recently, but it has enough differences to make it distinctive compared to the previous build. There are a lot of cool elements on this build which have grown on me over time. The small, buildable drones which detach from the top of the build are pretty cool – with some nice parts usage used to emulate the design of quadrotor drones in a pretty authentic manner. The net launcher on this vehicle is also nestled within the build of the vehicle nicely too, helping to merge the mechanism for this feature with the build nicely.

The main thing with this build, however, is the small, portable laboratory which is removable from the back of the vehicle. I love this little detail. From the sticker with the Gallimimus on, to the eggs sitting on incubators, to the gorgeous 1×1 brick printed with a Mosquito in Amber. This feels like a great little build – and I can imagine it will lend itself well to play patterns for all different ages. I was surprised by just how impressed with this build I was. 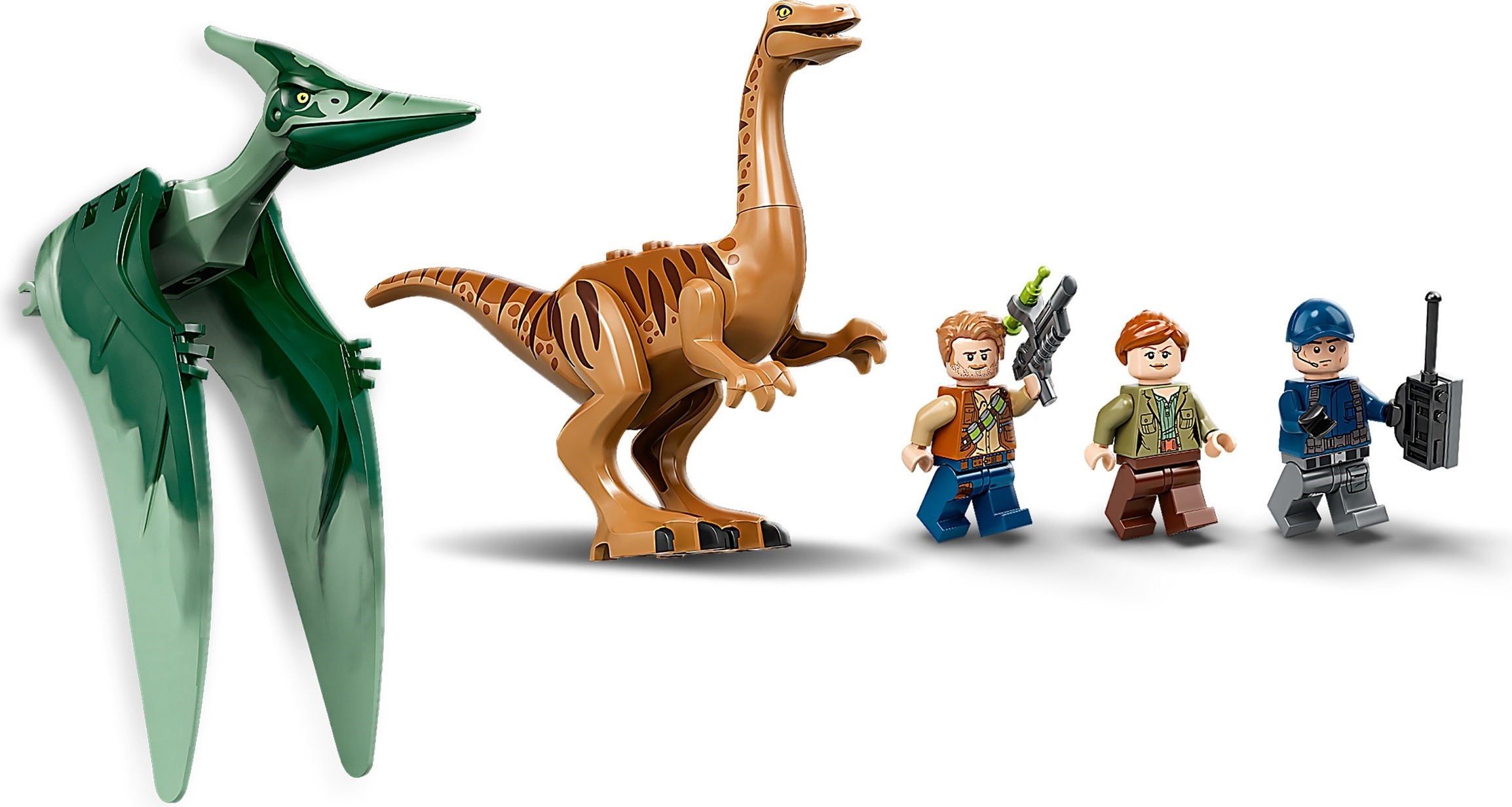 The dinosaurs in this set are cool. We get a recolour of the Pteranodon in a light and dark green colour scheme, and this animal looks gorgeous. I love the patterns on this figure, and the way the two different tones of green merge on the wings. We also get a Gallimimus, and this figure does reuse some of the sculpting from the Stygimoloch, but the next and face are unique enough that this doesn’t feel like a reuse, but rather a new figure altogether. This sculpt works well and introduces the brand new herbivore in a unique manner which provides fans with the opportunity to add another unique dinosaur to their collection.

The figure selection here is also decent – with the same version of Owen from the lab, an ACU trooper with a brand-new leg print, and a re-package of the Claire figure from the Fallen Kingdom line. Whilst the minifigure line-up could leave a little to be designed, I feel that overall this set is solid – and is a pretty great addition to the overall Jurassic World line. 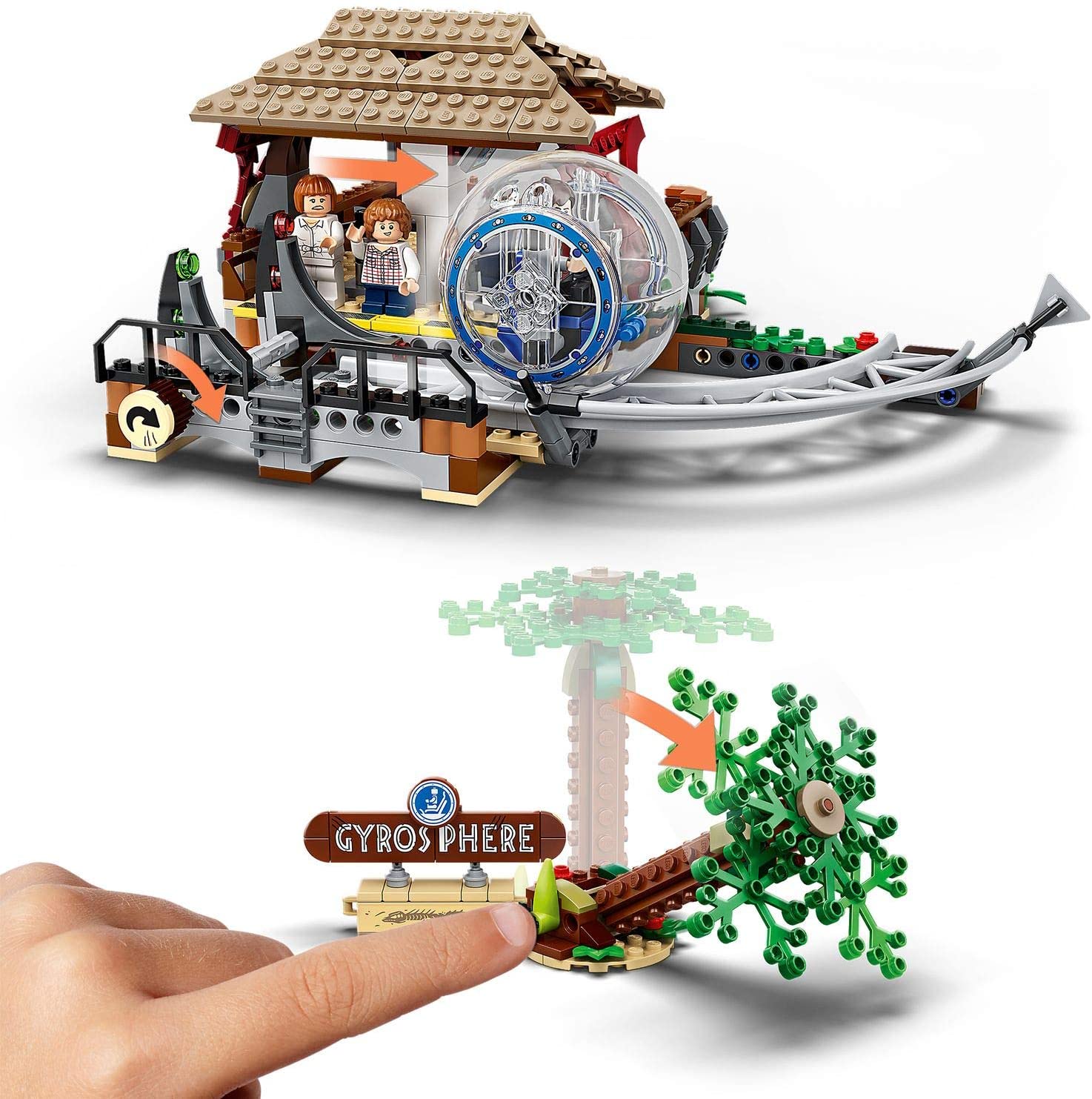 The largest set of the wave is Indominus Rex vs Ankylosaurus – a gorgeous set which recreates a fantastic version of a sequence which takes place within the first Jurassic World film. This is one of the few builds which directly mimics an attraction in the park – and it does so in a fantastic manner.

The bulk of the build in this set is the Gyrosphere Station from the first JW park, and LEGO took the time to put together an incredibly authentic structure which genuinely mimics the building which we see in the film. Everything from the waiting area, to the ticket booth, and the turnstile which Gyrosphere adventurers have to cross through all helps to make this structure feel like it has been plucked straight from the films. Combine this with the fact that we have the Gyrosphere signage seen in the film, and also two trees, and we have a great little build which creates a wonderful environment. If you’ve picked up previous sets, like Triceratops Rampage, then this is another great structural set which helps to build up your parks if you are aiming to build one! 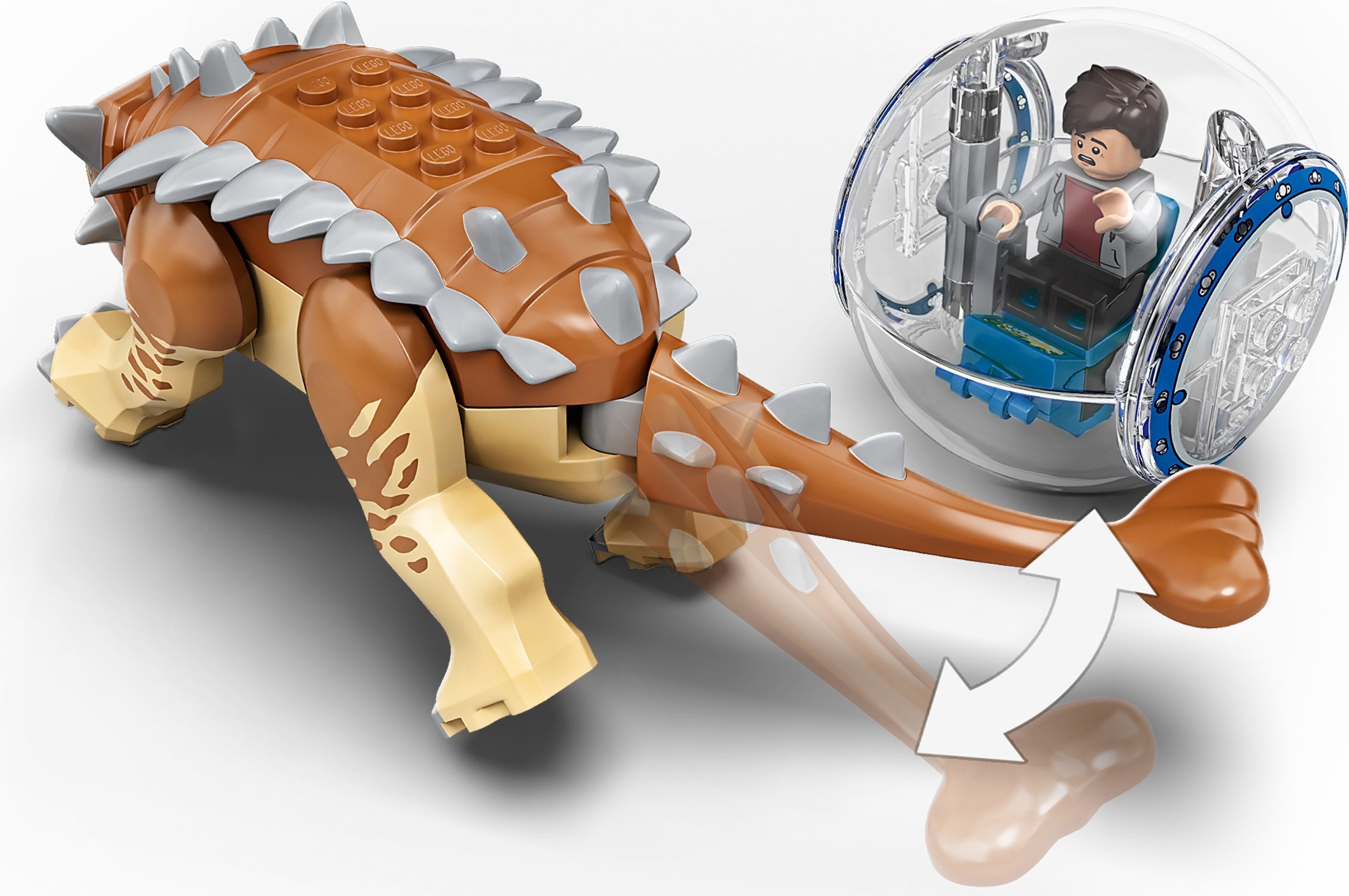 The two medium-sized Dinosaurs included in this set

are also great. We get a re-print of the Indominus Rex from the 2015 Jurassic World line, which provides a great opportunity for people who missed out on the first wave to get their hands on this set. The colours on this set look great – with some of the silver highlights looking fantastic.

The Indominus is complimented by a brand new Ankylosaurus – which is actually built from the ground up with some pretty unique LEGO pieces, as opposed to a fully moulded piece. This means that LEGO may be able to make additional herbivores in the future without additional sculpting costs, which hopefully means it will be easier for them to make more new figures in. the future. Combine these dinosaurs with some fantastic minifigures – including a new version of Claire Dearing, and also a Jurassic World Employee (Gyrosphere Josh!) and you have a fantastic set which feels like it is pulled straight from the films. 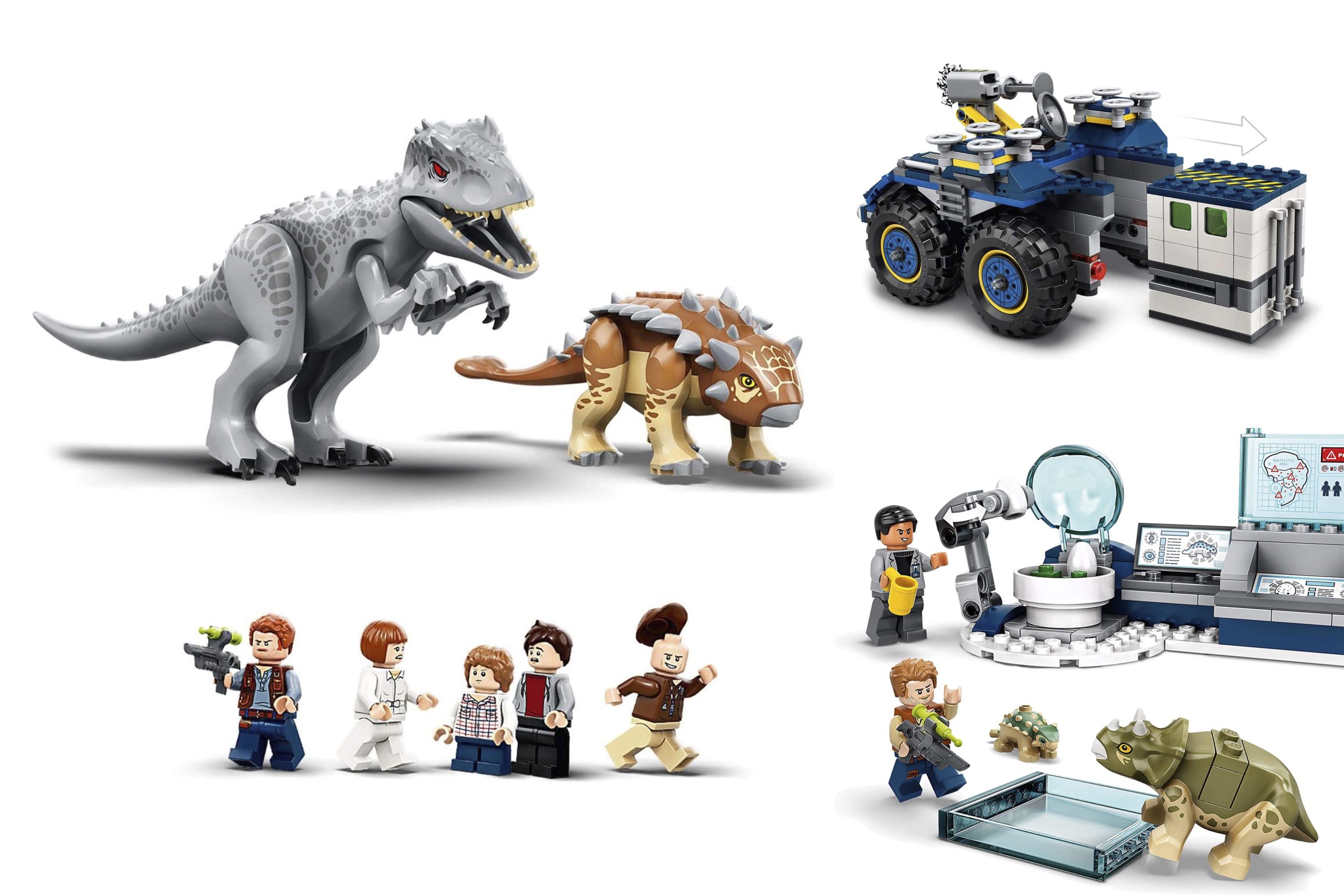 So, that’s it for my thoughts on the new LEGO Jurassic World sets! I haven’t covered the Juniors set, but that is because I haven’t picked that one up so don’t feel qualified to share my opinions on it. With that said, if you’ve picked it up, let me know what you think in the comments below.

You can also read some of my other posts here on the blog by clicking here.