292 days. That’s how long it took between LEGO announcing that Kevin Feeser’s tree house design would be turned into a set, and the final product actually being announced. This was a long time to wait. Is the LEGO Tree House (set number 21318) worth it? Read on to find out.

Just from the size of the box alone, you know you’re setting yourself a gargantuan task: this is the biggest LEGO Ideas set ever produced. The title used to belong to the Old Fishing Store (set 21310) with 2,049 pieces, but the LEGO Tree House has blown that record out of the water as it comes in at a whopping 3,036! 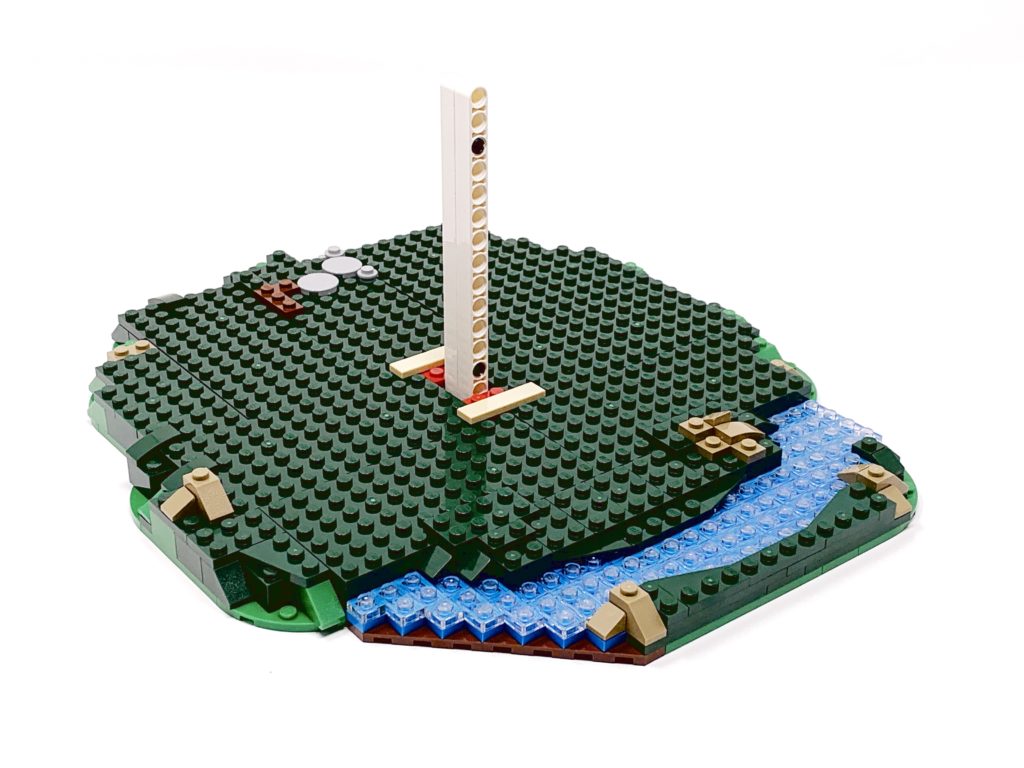 For something so big, the building experience is remarkably pleasant: there are so many different aspects of the construction that you remain interested and engaged throughout.

Just like any growing plant, you start at ground level and work your way up.

The base of the LEGO Tree House has a few technic pieces for rigidity and to hold on to the tree securely, but it also serves a decorative aspect. You build a small stream (made up of small trans clear plates on top of larger blue ones to give a satisfying illusion of running water). You create a path, and a secret hiding area where gems are located. Later on you’ll be adding vegetation, a few poisonous-looking mushrooms and an area for the family living in your tree house to cook and eat. That’s right. Rain or shine, they’ll be eating outdoors. 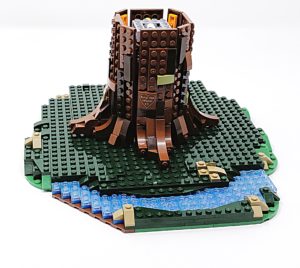 As you build up, you’ll notice that everything is based on octagonal construction. The trunk has a novel way of connecting some of the plates to it to give it a roundish feel. Each side is built along the same concept but you hardly ever find a time when you have to build the same section multiple times: as this set simulates an organic tree, each section has unique bits of greebling, meaning that no two area is built exactly the same.

This makes for an unusual mixture of building similar sections but with different finishes: you can’t build them all at the same time even though you recognise the construction process as you’re doing it multiple times. Some might get frustrated by that, while others may enjoy the variations on a theme.

Not So Humble Abode

The three huts of the LEGO Tree House, where the minifigs will be living, are wonderful. Considering their size, they take up a lot of pieces and that’s because of the amazing amount detail crammed into each of them. 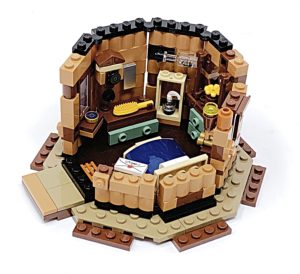 You’ll find trinkets like a cuckoo clock, a ship in a bottle, scissors under the bed (why? Because Kevin is a hairdresser!), quill and ink (setting this family’s adventure a long way back in time), a bug in a jar, a really well done microscope, a little toy house, a fairy tale book and a map to a hidden treasure – those aforementioned gems (if you look closely, that’s the map from Indiana Jones and the Last Crusade 😉). 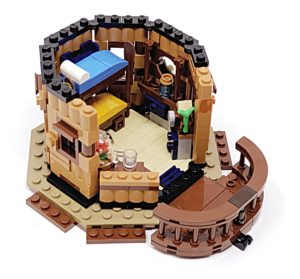 And it’s not just all those trinkets that make the three rooms interesting: just like the tree, they’re built on an octagonal design, but even though they are all nearly the same size (the kids’ bedroom is slightly bigger), little details make them very different and a joy to build.

Some of the furniture is built upside down for instance, and so is the circular window found in two of the rooms. 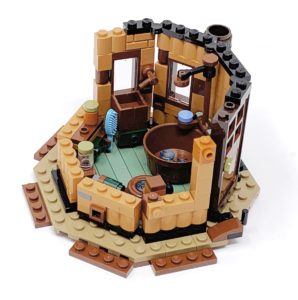 I absolutely love the bathroom which is so well detailed – from a sink, to a shower (complete with a barrel above it to give the water enough pressure to work!), to a great looking wooden toilet. You’d think, living in nature, they’d do it all in the woods, you know, like bears, but no! Luxury is important when you’re roughing it! 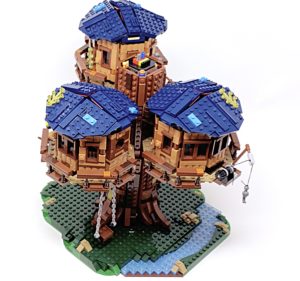 Each hut has a roof which just rests on top – securely, mind, it’s well wedged in through friction, but not by being connected to any studs. They’re also colour coded on the underside so you don’t end up putting the wrong roof on the wrong hut once you’ve finished playing.

Having built the huts and a lovely wooden bridge to connect two huts together (why no bridge on the other side to connect the other hut? Does LEGO expect the minifigs to jump each time? Maybe they do…), you then tackle the top of the tree. This is where things can get a little tedious.

Remember when I said the trunk’s side are similar yet different? The same applies to the branches, only there’s a lot more of them. Thankfully, the end result is worth it. They’re built with multiple hinges, meaning you can display them in many different ways so you can get the look you prefer.

Also, just like you can remove the roofs, that top canopy is designed to be lifted off so you can have easy access to play inside the huts. 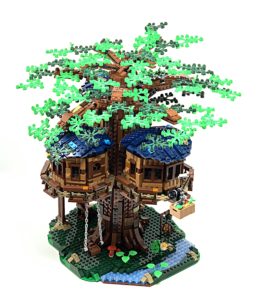 There’s also a pretty big feature: you can change the leaves from summer to autumn. Sadly, it’s not an easy matter: all the leaves are very securely attached, either with little twig pieces in between them, or clutched between two plates. Those leaves won’t ever fall off as you move the tree around.

But this means that if you want to change the colours, then you’re going to have to spend the time to change them all one at a time. And there’s a LOT of them. Personally, I like mixing the two types of colours and have the tree in the middle of transitioning between summer and autumn.

There’s a few branches and leaves placed under the huts too and maybe it was my copy of the set, but I found that they don’t hold very well: the weigh of those leaf pieces is such that the tiny claw piece that’s used to hold onto them doesn’t really do a good enough job, so you have to be careful with them, and unlike the top canopy, those leaves can all too easily be accidentally knocked off during travel or transport.

One thing worth mentioning: all of the plant parts in this set (leaves, twigs, etc) are made from renewable sources, as part of LEGO’s commitment to divest itself from fossil fuels. This isn’t the first set to include such parts, but it’s the one with the most of them. 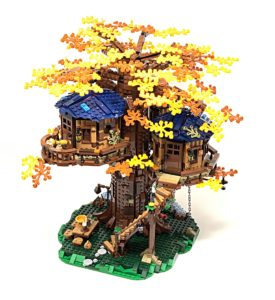 Finally, we have the four minifigs, a mother and father, and two children – a boy and a girl – diversity again 🙂. My only regret is that the children don’t have the new small hinged legs, but are cursed with the tiny legs that don’t bend. This is a real shame because the tree has a great swing, but you can’t put the children on it as it messes up the balance. Only the parents can enjoy it, which really doesn’t seem fair.

But this is something that can easily be modified.

LEGO have created a beautiful set. It’s well designed and full of fun features. It’s a pleasure to look at and play with, and despite a couple of niggling design decision – which set is ever perfect? – overall, this is a superb creation, and coming from someone who’s usually all about sci-fi, that’s saying something!

If you can afford it, go grab yourself a copy. You won’t regret it.

And as you’ve read all the way to the end, have this quick build as a reward. 3,036 pieces, 4,714 photos, one massive construction experience! 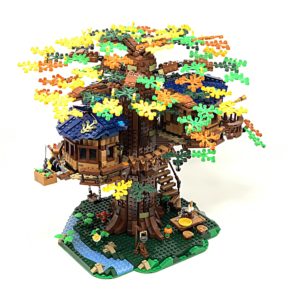