2016 was my absolute favourite year for LEGO Marvel. However, the theme continued its high-quality sets and minifigures in the following year. After a while of careful consideration, I believe that 2017 is the second-best year of LEGO Marvel. Today, I’ll share with you why I think that.

Following this $10 USD sub-theme’s success from the previous year, LEGO decided to renew the Marvel Mighty Micros for 2017. And I’m glad they did. To this date, I still believe that this was much better than today’s mech sub-theme.

The Spider-man vs. Scorpion (76071) was fun. We got another Spiderman minifigure, however, it was different from 2016’s Mighty Micros Spiderman. Our second ever Scorpion was a Mighty Micro, and it was awesome. It was simple, yet wacky. The builds were really funky, but nothing much to talk about.

The Iron Man vs. Thanos (76072) was probably the most popular one. We received our first comic-like Iron Man minifigure with such a cool face print and the ‘washing machine’ torso. We also received a new Invincible Iron Man helmet mould with this figure. The Thanos minifigure was really cool, considering that he was made as a minifigure, rather than a bigfig. The Iron Man vehicle was nothing too cool. However, it was quite clever how the designers made Thanos’ car an Infinity Gauntlet – his iconic weapon.

Our final Marvel Mighty Micro was Wolverine vs. Magneto (76073). This was our third Wolverine and Magneto, and our latest X-Men set. Again, Wolverine looked cool, but the shadow head of Magneto was extremely clever, to make him look menacing. Wolverine’s vehicle was a miniaturised version of the Blackbird (The X-Men Jet) and Magneto’s was a Magnet – this was quite clever, too, considering he has magnetic-related abilities.

Following 2016, LEGO decided to yet again release non-MCU based sets. I cannot stress how much I love getting new characters in these Avengers: Assemble. A great example was this $20 USD set where we received our first Ms. Marvel. She was well-done. A new mould was created for her body, to illustrate her stretching ability. There were flexible tubes that were permanently attached to the torso, with minifigure hands on each side. The head, torso and legs were also so great and accurate to the comic version of this character.

We also received our first Super-Adaptoid. It was quite simple, and I wish we received more printing for this character. It used the newly moulded Invincible Iron Man helmet, and Falcon’s wings from his first LEGO appearance. Captain America also appeared in this set, with an appearance that somewhat resembles his Captain America: The First Avenger appearance, with a cool head and torso print, in addition to his shield. We also received our first Power Blast pieces, where you place it in a minifigure’s hands and launch it by pressing down on it.

At this point, we had received many jets from this theme, so they were starting to get old. However, this one was a pretty decent one. It has a red, blue and white colour scheme, reminiscent of Captain America (as it was his jet). It had an opening cockpit. The primary play feature involved you pushing a modified tile, which would move the wings in a straight position. There, you would push down on Technic rods to shoot out Captain America-printed discs. It was a unique play feature – well the wing function was.

This $30 USD set was an indirect Iron Man 2 set. We received an Invincible Iron Man suit for Iron Man, based off his comic appearance. He used a new mould for his helmet, which was named after the figure it first released in – Invincible Iron Man. We also received our first Detroit Steel minifigure, better known as Justin Hammer, a primary villain from Iron Man 2. Since we never got sets from that movie, it was nice to finally receive him. He re-used the Invincible Iron Man Helmet, and his printing was quite menacing.

However, the real draw to this set was the Agent Coulson minifigure. Most LEGO Marvel fans, including myself, yearned for this character to be in minifigure form, especially after his prolonged appearance in the first two Iron Man films and the first Avengers movie, in addition to his inclusion in Marvel’s Agents of SHIELD. Many bought this set just for him. 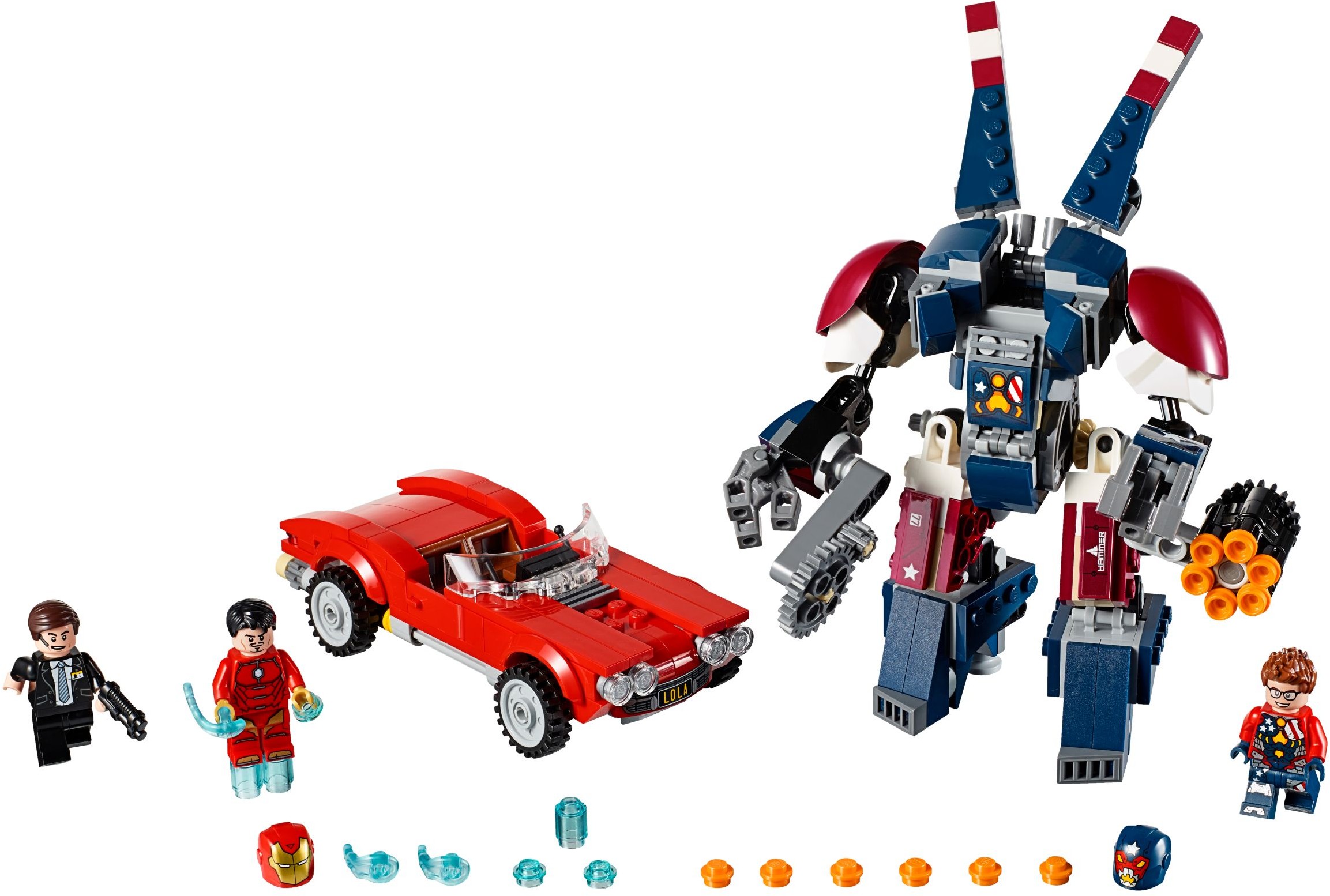 The builds were a mixed bag. On one side, we got Agent Coulson’s iconic car, Lola, which appeared a few times in Agents of SHIELD. It was a great build as a car. It also had a play-feature. On the rear end, two Technic pieces could be rotated to turn the wheels on the car, to set it to flight mode. On the other side, the Detroit Steel mech was really messy and ugly-looking. You could rotate various joints on it, in addition to a six-stud-shooter and Technic saw play-feature. However, it was just very trashy.

This $60 USD set was the epitome of a LEGO set with great minifigures and awful builds. We got such a unique Hulk, using the older, 2012 Hulk mould, with lime green skin, light purple pants, and most peculiarly, green hair. We also received our first ever She-Hulk with a great new face, torso and dual-moulded legs. In addition, the set also gave us our first-ever Red Hulk, using the newer, 2015 Hulk mould but in red, plus our first Red She-Hulk, with a unique hair, head and torso print.

The builds were terrible. The massive plastic wheels used for both vehicles made the set look like it was for small children. So many large moulds were used, bumping the price of the set up for no reason. Both had stud shooters as to shoot at the opponent. The primary play-feature of the set was to smash the vehicles into each other – basically what the Hulk does best. Using a Technic structure, a contraption was created to launch all the figures off of their respective vehicles after crashing. Yeah, LEGO is made for kids, but this set has zero appeal to any adults, who are a large part of LEGO’s audience.

2017’s first MCU movie was Guardians of the Galaxy: Volume 2. This $20 set was a tie in to the film. We received our first Mantis minifigure, with a great new head/antenna mould. We also received a new version of Rocket Racoon, with a cool build for his blasters, in addition to our first Taserface, with a cool-looking beard and hair combo. 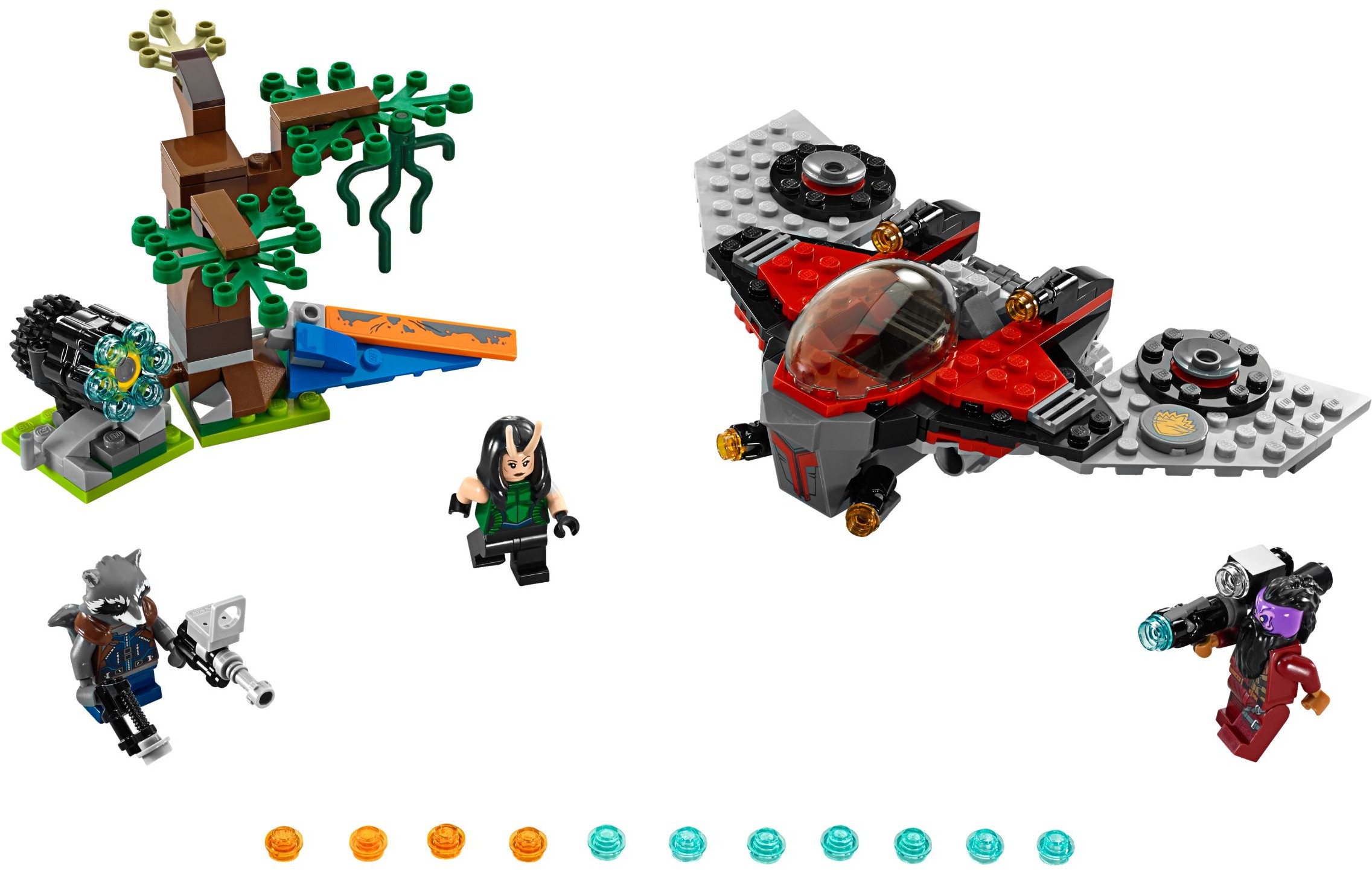 The Ravager spaceship was nothing too special. You could place Taserface inside, and activate the four stud shooters on various sides of the ship. The tree build was also average. There was a six-stud-shooter, that could be used by the heroes to shoot down the Ravager ship. To the side, the blue and orange wreckage was a reference to how the Milano (a set to be discussed later on), crashed on a planet during the film.

This $30 USD set was the best of the wave. We received an updated Star Lord, although he could’ve benefited from leg printing. We finally received our first Yondu, a fan favourite from both films, with a new mould for his fin, in addition to the very detailed torso and leg printing. Ayesha, one of the film’s villains was also included in the set, with her hair being in an unlikely colour – pearl gold, to fit the accuracy of the character. She also had a decent face print, torso and legs. Finally, we got an exclusive Baby Groot minifigure. Man! This was so adorable. A new mould was created for him – and the printing just added to its cuteness. 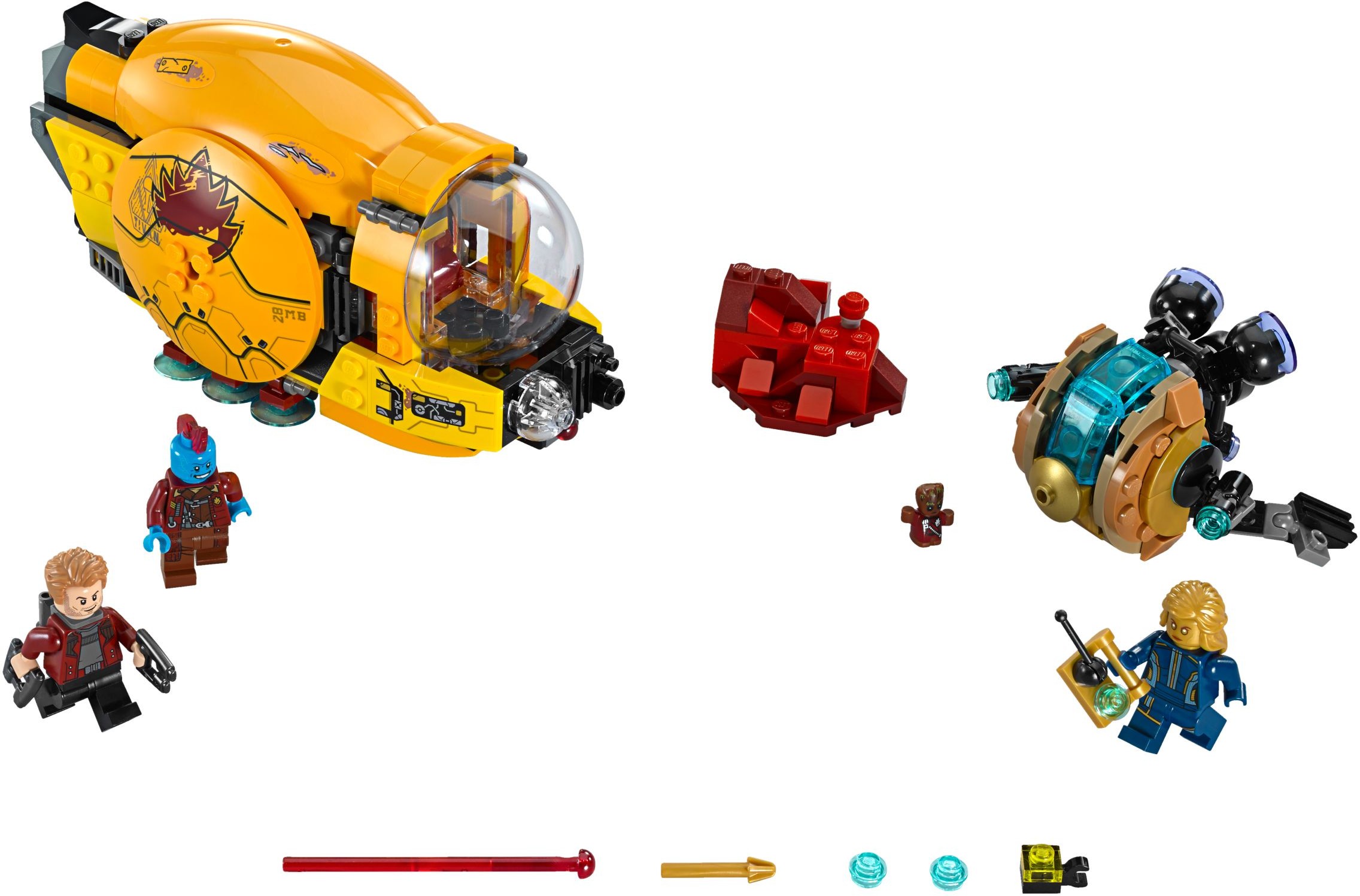 The build was so new, so refreshing, so… different. And I loved it. These are the types of sets I live for. To access the cockpit, you had to pull the top round panel back, which pulls the chair along with it. That was such an innovative way to design a cockpit – the windscreen doesn’t even hinge down, so you are required to pull the top panel back. The circular panels on each side could be opened up to reveal cargo space to store accessories and other parts.

The submarine-like build was just so, so cool. The probe was alright. It used a few pearl gold pieces which were cool and had stud shooters to target the heroes. It had a few extensions on ball joints to adjust the positioning of the drone. The small landscape build to the side had a play-feature, where you press down on a Technic piece to launch a rock piece. Overall, this set was just so amazing.

In addition to a highly detailed Star Lord, we also received a new Gamora, who used the same torso and legs as him. I always loved the purple printed streak in her hairpiece. Drax was also included in the set, although the print detail wasn’t as crisp as the 2014 version. Nebula was a nice addition but wasn’t as good as her first appearance. Finally, Baby Groot was also included, although he was a different version from the previous set, as he wasn’t wearing ravager clothing – rather he was in his more natural attire. 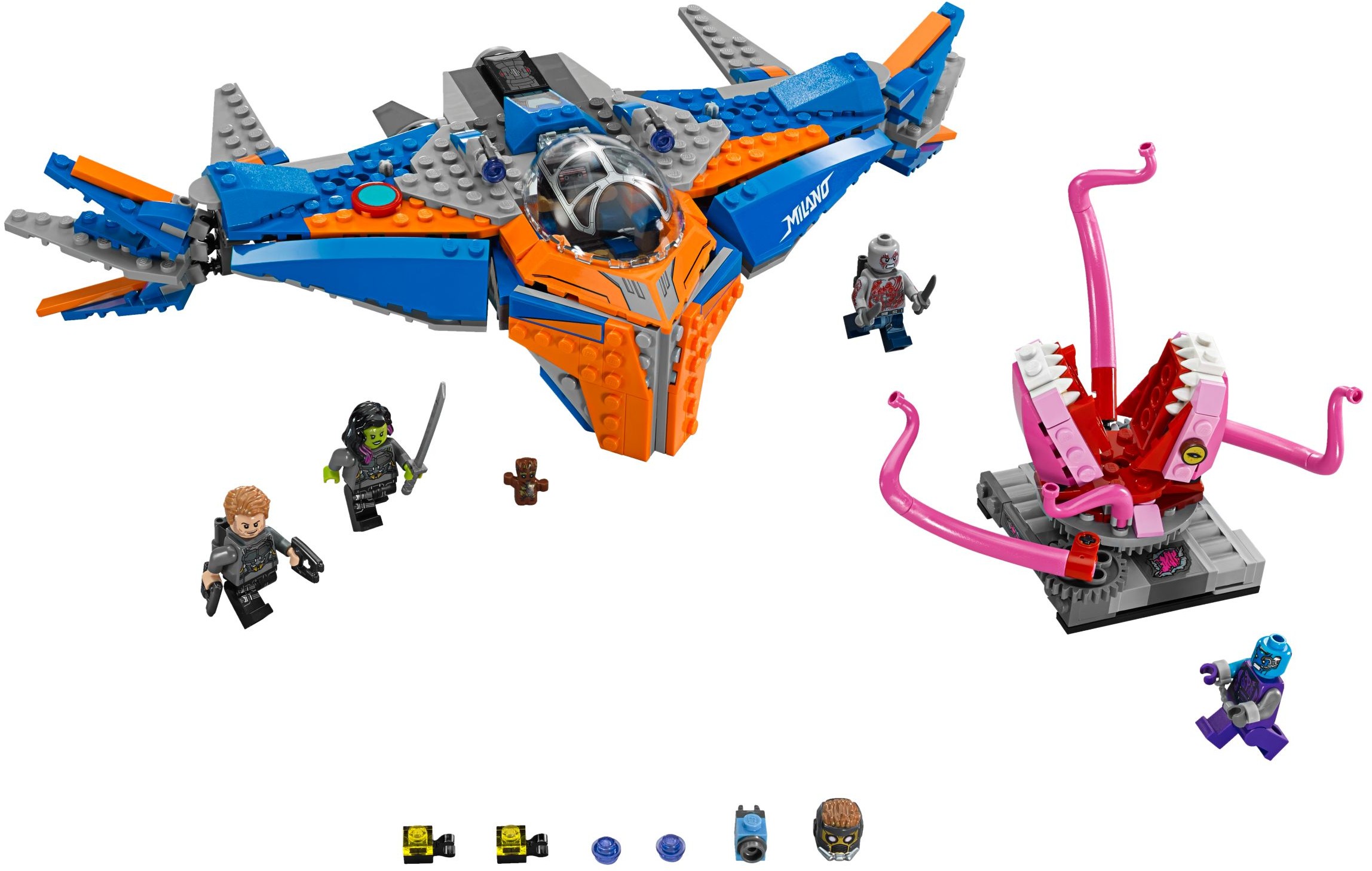 The Milano was quite substantial for a $50 USD set, however, was smaller than its predecessor. Aesthetically, it was more accurate to the movie version, as it had an orange colour, instead of yellow like the 2014 version. The opening cockpit could fit four minifigures. The flaps and winglets could all be adjusted. Stud shooters were included in the set to shoot at enemies. The primary play feature involved you pushing down on exposed axels on the top of the ship, which would deploy bombs to destroy the Abilisk which was cool. Speaking of the Abilisk, it was quite an underwhelming build but got the job done. It was built on Technic gears, allowing its head and arms to spin around. Although the Milano was smaller than it was supposed to be, the set was a great value for the price, allowing you to obtain this ship for cheaper.

And that’s Part 1 of my 2017 LEGO Marvel Retrospective! The minifigures and builds were all pretty strong, making 2017 quite a strong year for the theme. In part 2, I will be reviewing the second half of the year’s sets, starting off with the Spiderman: Homecoming line, moving on to the Thor: Ragnarok sets. So stay tuned for that!