Not very long ago, LEGO officially released images of their upcoming Collectible Minifigures Series 20. It seems like a new series of these mystery bags are coming out every other day, but you won’t find me complaining! Let’s take a look at these new figures, both as a whole, and what their individual parts can mean for custom builds. The names listed will be based on data from Brickset. 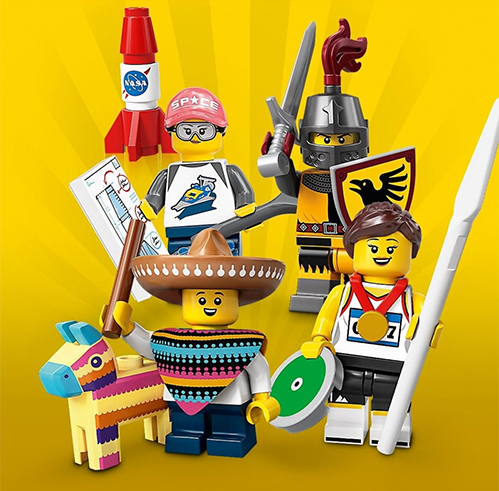 The Space Fan figure is possibly one of the most non-theme specific figures in the Collectible Minifigures Series 20. Her accessories include a wrench, which appears to be in gunmetal grey or silver, a 2×3 plate with a printed blueprint of a model rocket, and the model rocket itself. The rocket’s center cylinder includes a printed NASA logo, which will be incredibly useful for making other model rockets, or it can be used as drinking cups, specimen vials, or other scientific property.

The Tournament Knight looks to be a spiritual successor to the Frightening Knight from Series 15, but while this knight does not include a shoulder piece or a unique weapon such as a mace, he does include a nice new set of prints and a new sword mould. This figure could easily fit into a castle setting, or even a more modern depiction of a Renaissance Fair.

The Pinata Boy is a fairly unique and usable figure; a young boy with a colorful poncho and sombrero, alongside his trusty new molded pinata. While I cannot tell from the current images, it looks to me that the boy does not however have an alternate face where he is blindfolded, which is one of the primary ingredients in a pinata party; a possible missed opportunity. Obtaining a lot of these pinatas will make a city market look far more colourful and festive, and the poncho from the figure will make any figure equally festive.

While the Athlete isn’t unlike other minifigures we’ve gotten in past series, it still remains a worthy addition. Sporting a javelin and discus, the Athlete already bears a gold medal on her chest. This figure without these accessories, due to her prints, can be used for a wide variety of sports, such as marathon running, tennis, or bodybuilding competitions. 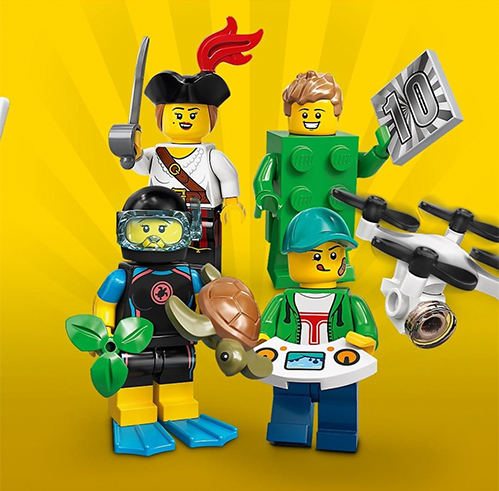 The Pirate Girl at first seems pretty average, but her new hair/hat mold and unique torso and leg prints show her worth to the collection. She also comes with the long (over)used pirate cutlass, and not even a flintlock, which I feel could have added some value.

Here we also see a new Brick Costume Guy in bright green, with what is possibly a new hair mould, or at the very least an existing one in a new color. His only accessory is a 2×2 plate with this Series’ color and pattern with the number 10 printed on, likely referencing the 10 years of collectible minifigures. He will likely still work well for a figure collector, especially those who also have the previous two brick suit figures.

While the Sea Rescuer is another ocean bodysuit figure, a staple of the Collectible Minifigure Series 20, this one is quite different from the rest. As a diver, she wears the classic helmet with the trans-blue snorkel visor, and her wetsuit is short sleeves and with short pant legs. As an accessory, she has a new sea turtle mould in olive green and light brown, thus giving her namesake, as well as a foliage piece to be used to feed it. The turtle can be a very useful piece, as is the rescuer’s prints for many coastal scenarios.

The Drone Boy is a very complete figure, and a very useful one for anyone’s city setting. He has a cap in teal, which is a new color for the piece to my knowledge. His primary accessory, as his name implies, is a quadcopter drone with a new base piece, built up with the new style Overwatch blaster and four pin propellers. He also includes a controller, printed on a white elbow tile, which also has the camera feed from the drone printed on. 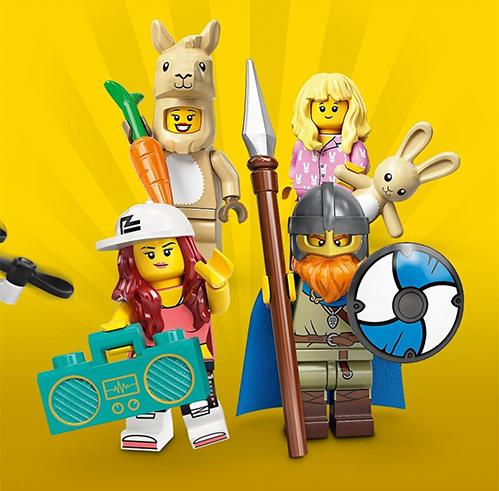 Continuing the tradition of animal costume figures, for Collectible Minifigures Series 20 we now have the Llama Costume Girl. The overall shape is quite reminiscent of the Giraffe Guy from the LEGO Movie 2 Series, but the prints and colors are all different. The tan based is accented by a fuzzy, white belly, and the little tufts of fur on the hat mould add to the charm.

The Breakdancer I find to be a very interesting one. With a coral tank top, highly detailed dual-molded legs, and a new dual-molded hat/hair piece, all aspects of this figure are unique and highly versatile. This figure would pair well with Rapper from Series 3, or other similarly stylish figures.

The Pyjama Girl herself may not be the most useful figure for displays, but the parts that make her up are. The long hair now colored in blonde can be used for a variety of characters, and the pyjamas themselves could be used for different characters of different ages. The figure itself may also pair well with the Sleepyhead from Series 6, and could be interpreted as brother and sister. For her accessory, she has a new stuffed bunny mould, which, either intentional or not, has very similar prints to the Llama Costume girl, even sharing the same colors.

While this is not the first viking figure for this theme, this one is arguably the most accurate. Instead of a horned helmet and exposed arms, this Viking has a more historically accurate iron helmet and cloth armor. The orange beard and helmet look to be the same piece, which may be a detriment to some who want a large variety of viking warriors. For accessories, he wields a dual molded spear and a new print for the round shield, bearing the colors of the Flag of Scotland. 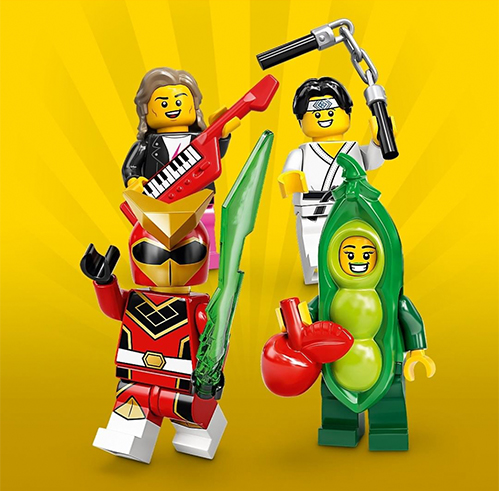 The 80s Musician also is quite similar to figures we’ve gotten in the past, but now it will allow for a larger ensemble of band members as an option. This rockstar uses a keytar, a recognizable 80s instrument, his rocking mullet also indicating his place in time.

The Martial Arts Boy wears a classic kung-fu style gui, and wields a brand new nunchuk accessory. The nunchucks can be used for a variety of characters of different time periods, and the gui can be massable to form a whole martial arts class.

I believe that the Super Warrior is going to be one of the most sought after figures by collectors in this series. Reminiscent of classic Tokusatsu shows such as Power Rangers and Ultraman, the bright colors and thick lines scream nostalgia. A green energy bolt accessory adds to ‘super’ of this Super Warrior.

Finally, we have the continuing tradition of the vegetable costume minifigures with the Pea Pod Costume Girl. Colored with three different shades of green, she is certainly an eye catching figure on her own. Her accessory I find to be a bit questionable, a single red apple piece. Perhaps it is a reference that alludes me, but I feel that perhaps silverware or a new printed plate would have been more effective.

While I find LEGO Collectible Minifigures Series 20 to be satisfactory (it’s hard for it to not be), I feel that the minifigure selection is just a tad weaker than what we saw in Series 19. Series 19, in my opinion, had a much wider variety of figure types that could be implemented into many different dioramas and displays, but I feel that Series 20 is a slight step back in diversity. However, like Series 19, this has a perfect ratio of male to female figures, 8 and 8. This is always appreciated, and I hope to see this trend continue. Overall, I (literally) find the parts of this series greater than the whole, but as long as CMF series continue to be made, as I said before, I have no complaints!