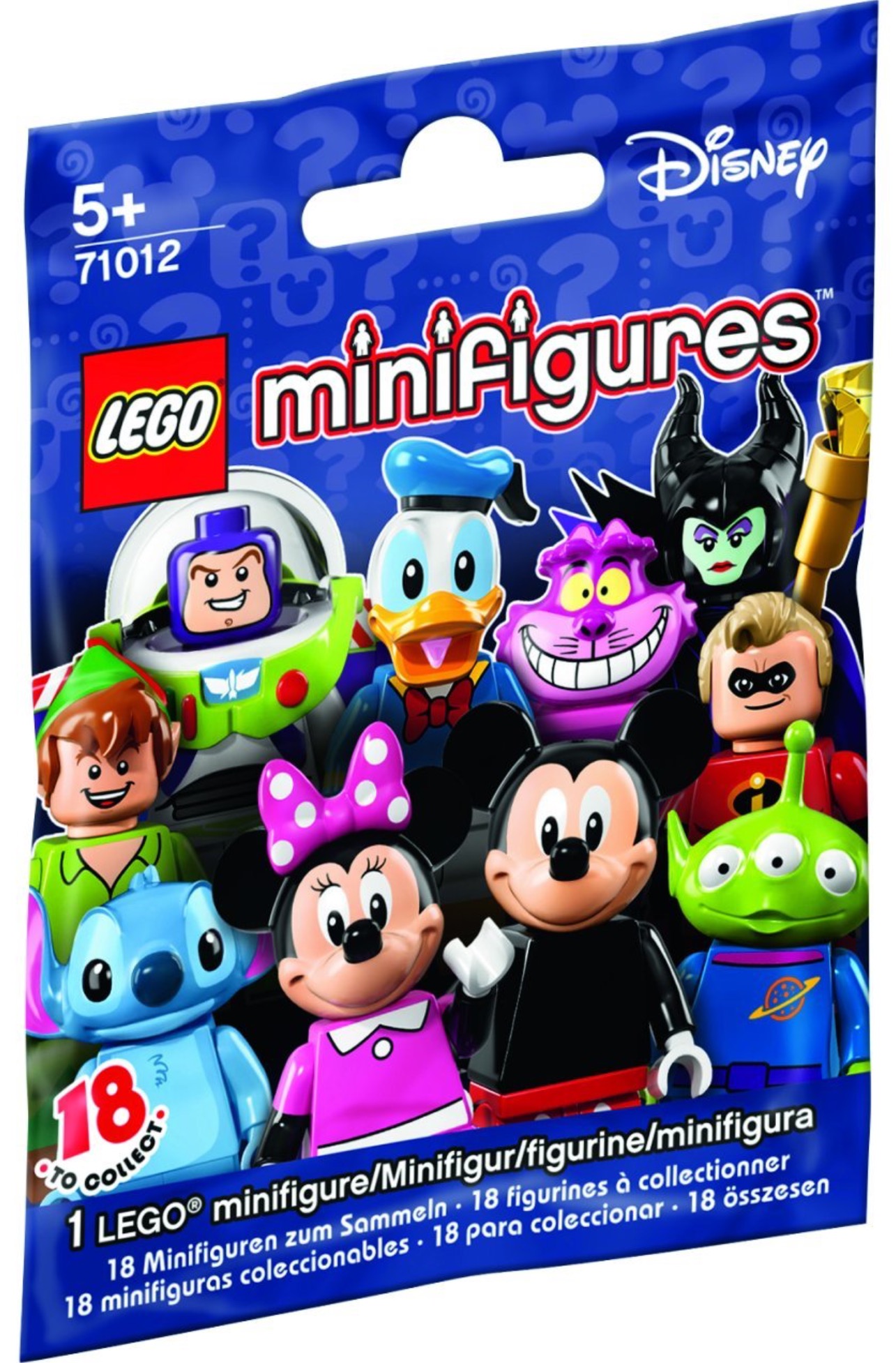 Who knew that I could make a two-part article on a LEGO Disney CMF series? I feel like I have too much to say on plastic bricks. So far, this series has not disappointed. Every figure that LEGO had designed was just perfect, and it didn’t stop at 9. We still got 9 to go!

Released in 2016, these minifigures retailed for USD 4 each. 2016 was one of the only times that LEGO had released proper LEGO minifigures. So with the debut of the minifigure-scaled LEGO Disney castle set, this series became a whopping success! There were 18 LEGO minifigures in the entire Disney CMF. 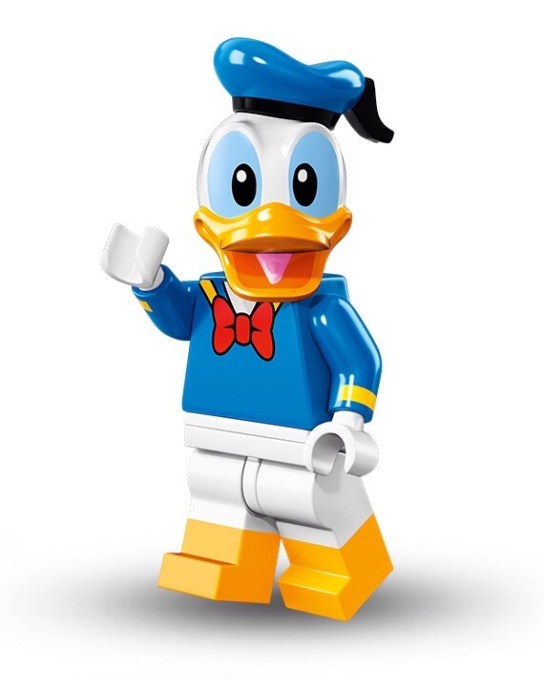 I think I can only remember seeing the infamous Donald Duck in Mickey’s Clubhouse when I was maybe 6. Like I’ve hardly had any emotional attachment to this character, despite how iconic he is. LEGO created a new mould for his head, like many other characters in this series. Well – technically he was given the same head mould as Daisy Duck. However, he did get a completely new hat mould to match the iconic hat that he is always depicted in. He has quite a simple, but effective torso print, with the iconic red bow. LEGO also decided to give him arm printing, which was unnecessary, but awesome. Finally, like Daisy, LEGO included dual moulded legs on this figure, along with a tail piece, like Daisy. Overall, he was a 9/10. 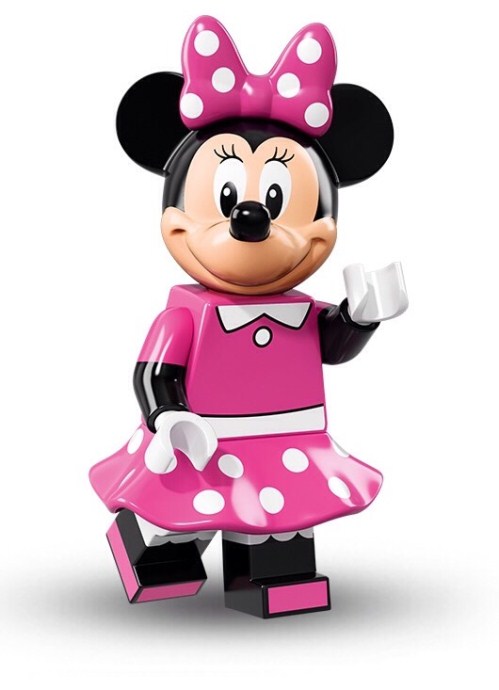 Yes! Another phenomenal figure! Arguably the second most iconic Disney character of all time – LEGO nailed Minnie. Before writing this article, I actually didn’t know that her name was spelled with an I and E. I thought it was ‘Mini’. Well, we learn something new every day. And guess what? LEGO made a new head mould for her. It was designed just beautiful – and the printing on it just complemented it so damn well. She also received a bow attachment, which could be applied onto the head via a tiny hole connection. The torso, like Donald, was simple, yet effective. She even came with pink and black dual moulded arms. LEGO gave her a dot printed skirt piece, in addition to dual moulded and printed legs. 10/10. 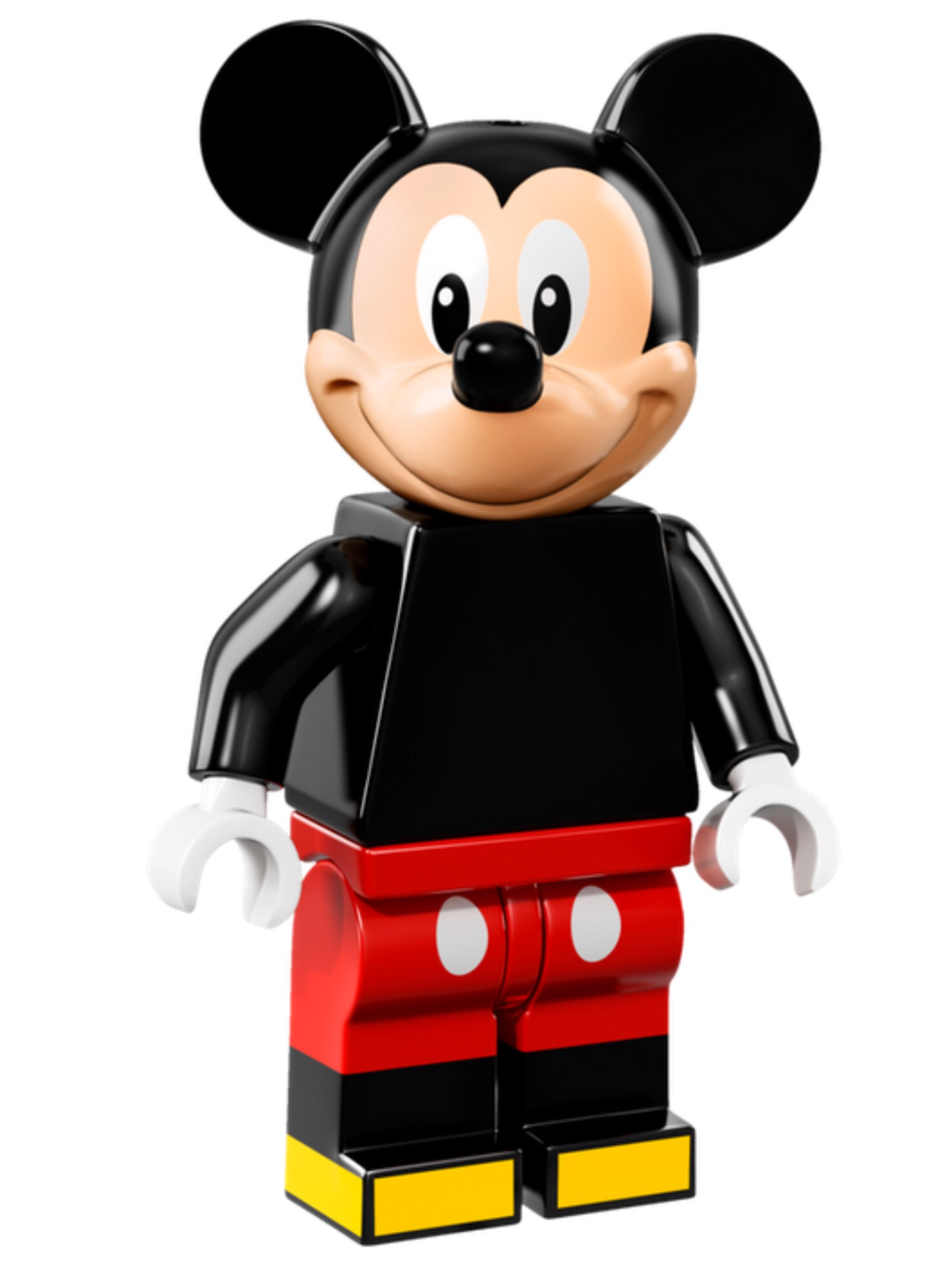 I feel like many people would be quick to judge that this figure was hardly detailed. But LEGO accurately designed it. They used the same head mould as Minnie and very similar head printing. His torso, although having no printing, was accurate to his iconic look. However, LEGO gave us some amazing dual moulded and printed legs. 10/10. 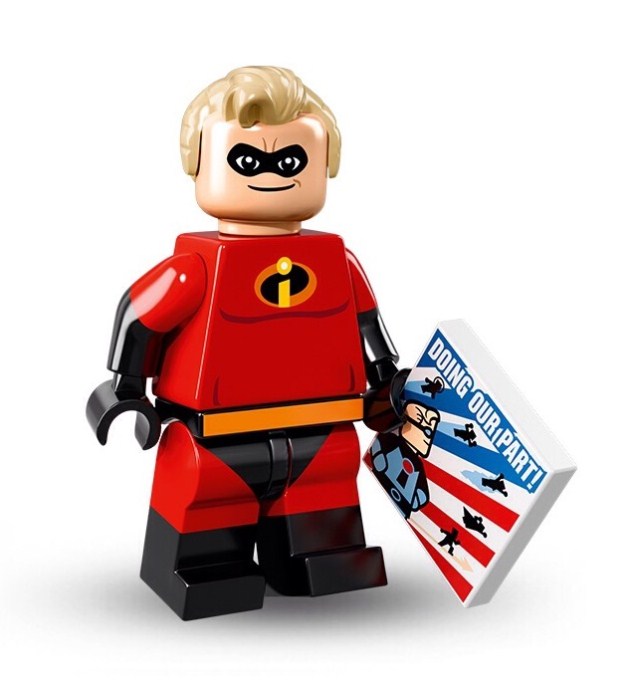 This was a great figure. Sadly, it suffered from the conditions that LEGO has with the minifigure. Why? Well, Mr Incredible is quite a large man and had extremely broad shoulders. But due to the limitations of minifigure design, LEGO couldn’t really achieve that. A big-fig firstly would not have also been accurate, as the character isn’t as big as the Hulk. And secondly, a big-fig would not have been placed into a CMF series. So with all those limitations, I’d say that they did a great job.

They used quite an accurate hairpiece and nailed the face print. The torso was amazing, with the iconic Incredibles symbol and he even got black and red dual moulded arms. To finish it off, LEGO gave us dual moulded and printed legs. Overall, he was a well-done figure, considering the limitations of LEGO. His accessory was a 2×2 print of a flyer which stated “Doing our part!’ 10/10.

Wow! I can’t wait to have Syndrome in the future. His hairpiece was completely a new mould. And it looked so accurate. They nailed it. His face print was also so menacing, and genuinely embodied the likeness of the character. The torso was also well done, with a giant S printed on the chest, along with black and white dual moulded arms. They gave him a black cape too! Finally, the legs were again dual moulded and printed. His accessory was a 2×2 print of Omnidroid schematics. 11/10. 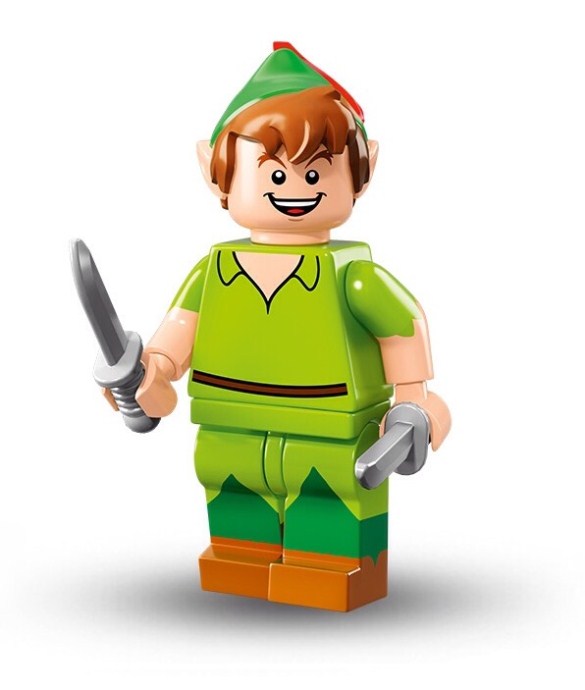 Man! Peter Pan was honestly such a great movie. I even saw the older live-action version which was a very unique take on the tale. However, the minifigure stuck true to its Disney roots, with the iconic green look. A new hair/hat combination mould was created for him, along with a new face print. His torso was simple, yet accurate. Again, continuing the trend of the second half of the CMF series, he received green and light nougat dual moulded arms and dual moulded and printed legs. He came with two knives, which was fine as accessories. 10/10. 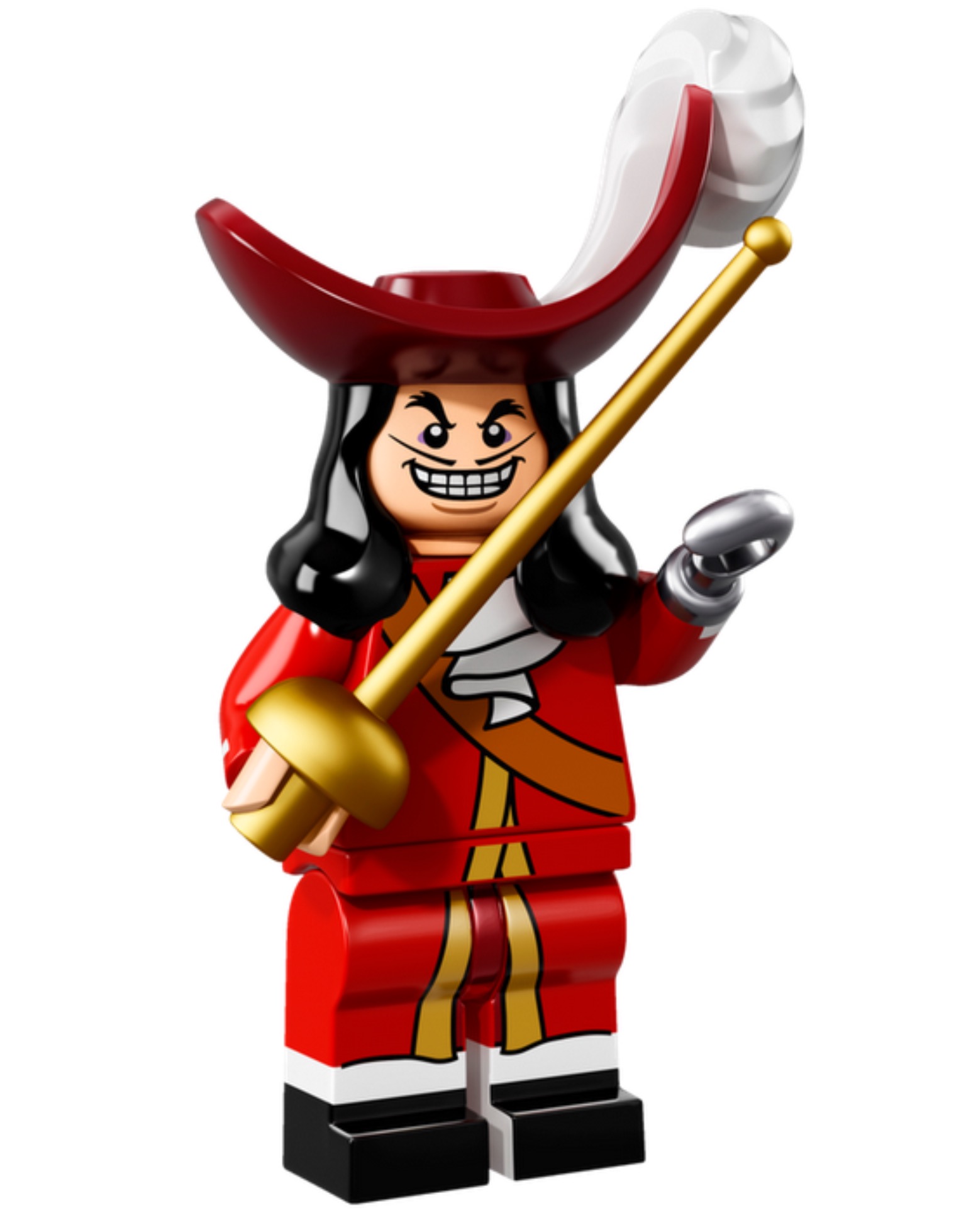 This is probably one of the best figures in the series. Captain Hook was awesome. He came with an extravagantly new hair/hat mould, with a feather sticking out. The face print was creepy, yet comic-like. I just loved how the moustache was designed. Just amazing. His torso was filled to the brim with layers of clothing detailing. One one of the arm, they gave him the hook for his arm which was so cool! And it didn’t stop there. I mean, even the legs, as usual, were dual moulded and had continued printing from the torso. The sword was also an amazing accessory. 11/10. 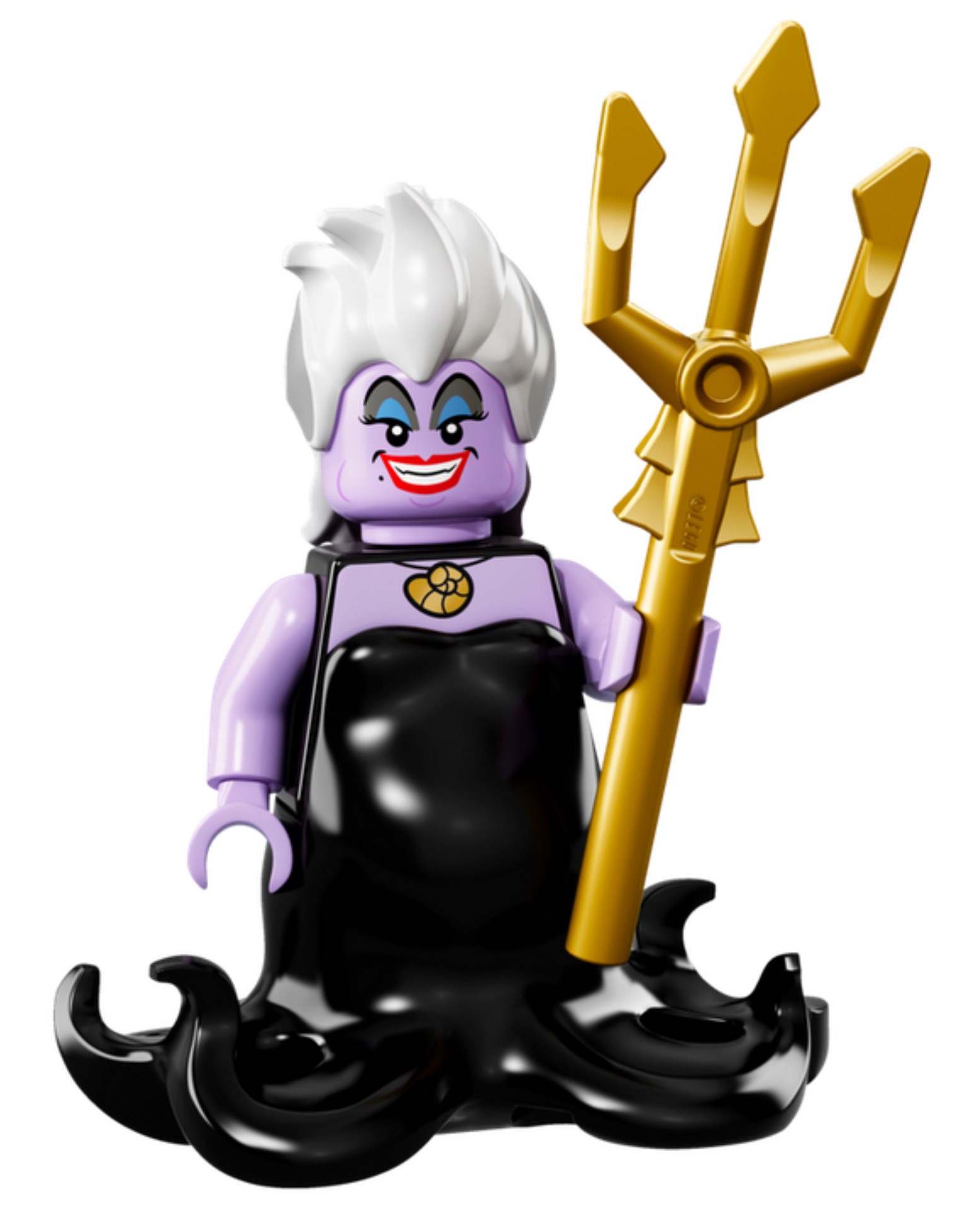 Again, this figure was another of the finest from the series. She received a new hair mould. And a very creepy face print. It was so darn accurate! They captured the likeness perfectly. She came with a cool torso print. But let’s talk about that newly moulded leg piece! Hands down, this piece was the best addition to this entire CMF series. I mean, it’s not just the legs – it even comes up to the torso. This mould was so extravagant, and they nailed it. Also, she came with a trident piece which was fitting for her. 11/10. 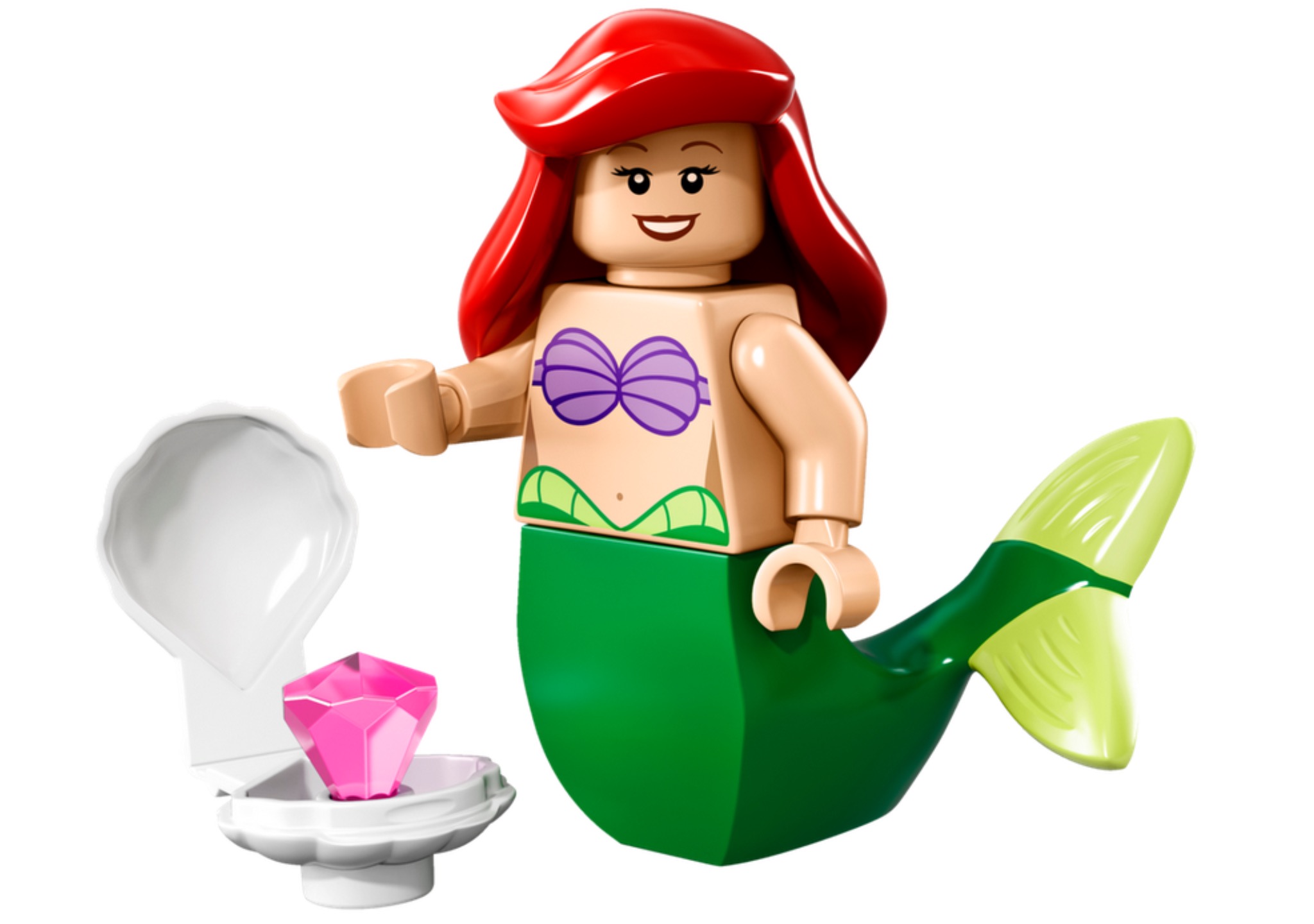 Good job LEGO. Ariel was done perfectly. Her hair was a great new mould, and her face fitted perfectly. Her torso was again, pretty simple, yet accurate. Finally, the tail piece. I don’t know if this was a new mould by LEGO or if it was just a recolour of an existing piece (Editor’s Note: The tail isn’t a new mould, it was first used in the mermaids of the Pirates of the Caribbean sets, but the color is new). Nonetheless, it fit Ariel quite well. However, it kind of looked a little-off putting with no scale printing – but that’s how the original character was designed. So I’d give them a pass for that. Her accessory was a sea shell piece with a diamond inside. 9/10.

I swear the same company who produced this phenomenal series was also responsible for the 2020 LEGO Marvel sets. Where was this effort? Did they make that in their sleep? Why are the LEGO minifigures in the Disney CMF so detailed, but retail sets are just pushed to the side?

And that’s it for my LEGO Disney CMF Series 1 retrospective! I’d say expect more retrospectives on all the minifigure series. Again, today will be another short outro. So take it, easy guys! Peace!