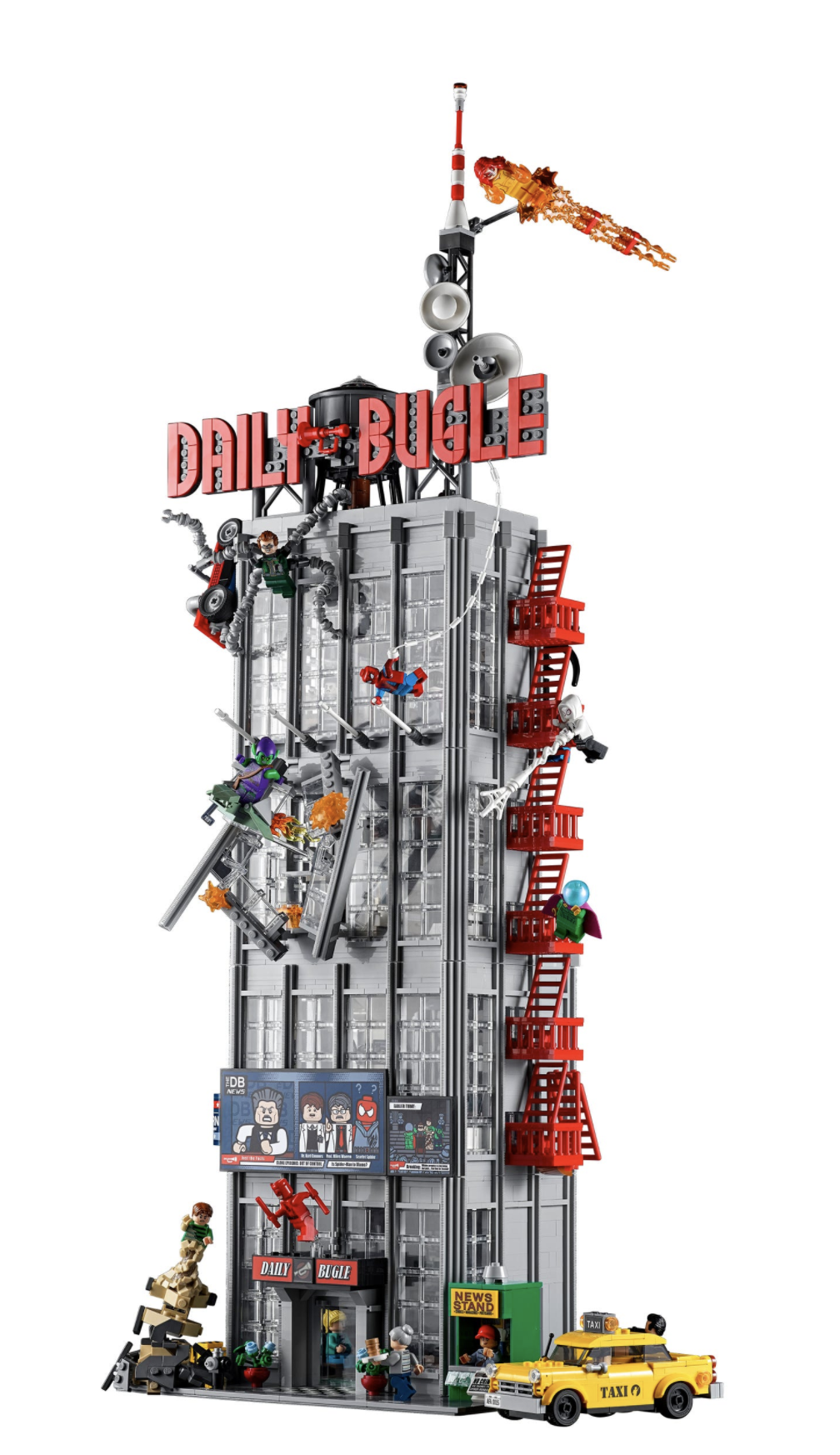 When LEGO set 76178 Daily Bugle came in earlier this year, it set a new precedent for the LEGO direct-to-consumer sets which we have received. Retailing for £274.99 and including 3,772 pieces, this set has undoubtedly set a new record for what a large LEGO building can look like – providing many fans with a way to access the skyscraper which they have dreamed of. Whilst the build itself is commendable, today we wanted to focus on the minifigures – as this set packs in 25 of them, which is the most LEGO minifigures which we have ever seen in a Marvel LEGO set.

Join me as we break down the roster of Daily Bugle Minifigures – starting with some of the less-interesting figures, and slowly building into some of the more unique characters added to this set. Before we get started I do want to shout out a similar fantastic article over on Brickfanatics, which really helped with this article. Let’s dive in! 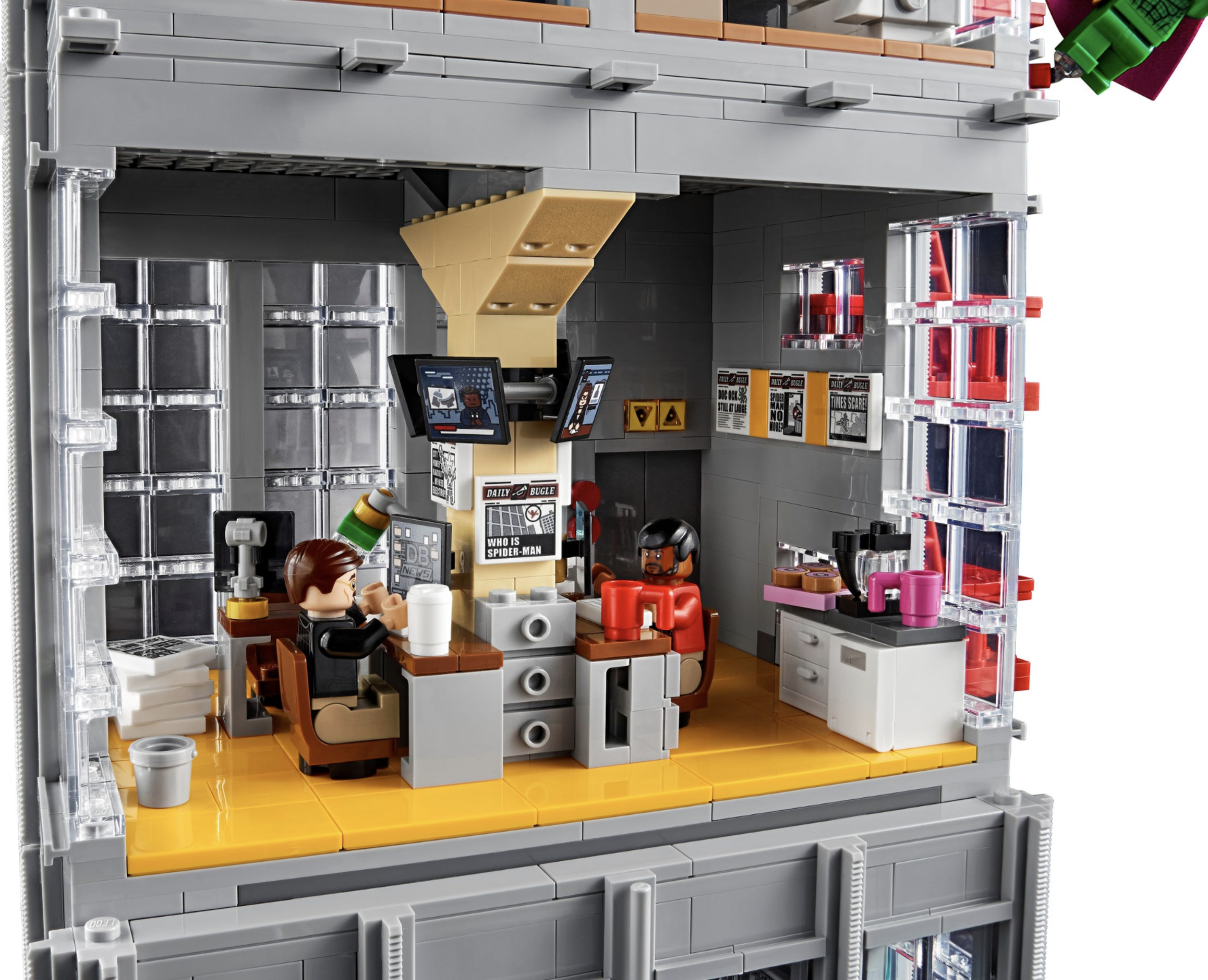 We’ll start with the figures who are perhaps not the most interesting, but who still include some useful elements with them. These figures include an assortment of reused pieces to create characters who can populate the office of the bugle. These characters include Robbie Robertson, Ben Urich, Betty Brant, Bernie the Cab Driver, Ron Barney, Aunt May, Gwen Stacy, Peter Parker and Amber Grant. Whilst these aren’t necessarily the most interesting figures for collectors, I personally love the inclusion here. It is very rare that we get civilian characters included in a Marvel set  – so having a good breadth and depth of minifigures included in the same set is fantastic. It’s worth noting that some of these characters also have specific roles in the Marvel Comic Books connecting them to other characters who we may see in the future. Make sure to check out the Brickfanatics article for more detail on this as they’ve gone into plenty of detail on some of the more interesting characters. It’s worth noting that whilst many of these figures reuse elements from other licenses, like Jurassic World or Harry Potter, there are still some really nice elements here which create some unique characters. 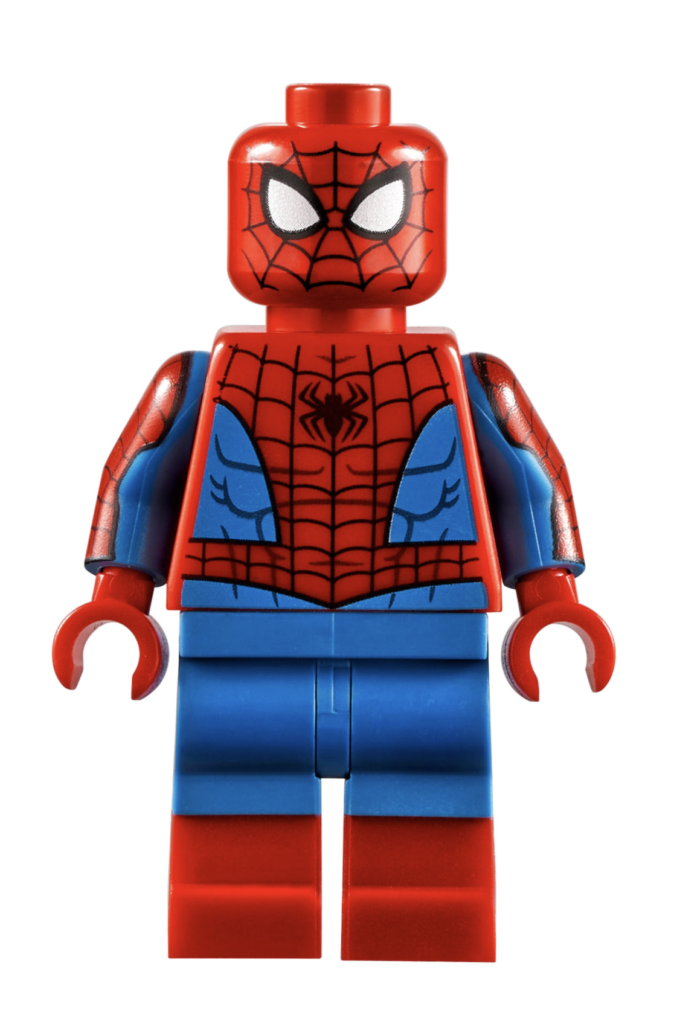 Next up we have a plethora of characters who we have seen before. We’ll start with the heroes who are re-included in this set. We have Miles Morales, Ghost Spider, Spider-Ham, and, of course, Spider-Man himself. These minifigures are well detailed enough – with Spider-Man featuring both his dual-moulded legs and his printed arms. It’s worth noting that in the core line, these minifigures cannot be obtained in one comprehensive set, meaning that the Bugle does a nice job of collating a lot of the different characters into one complete package. It’s also worth noting this is the updated version of Miles Morales included in the more recent Mech set, and Ghost Spider is an update on the 2019 version too – making use of the brand new hood mould which has been introduced more recently. Whilst these aren’t the most exciting characters they are still quintessential Spider-Man characters and therefore make a welcome addition to the roster of Daily Bugle Minifigures! 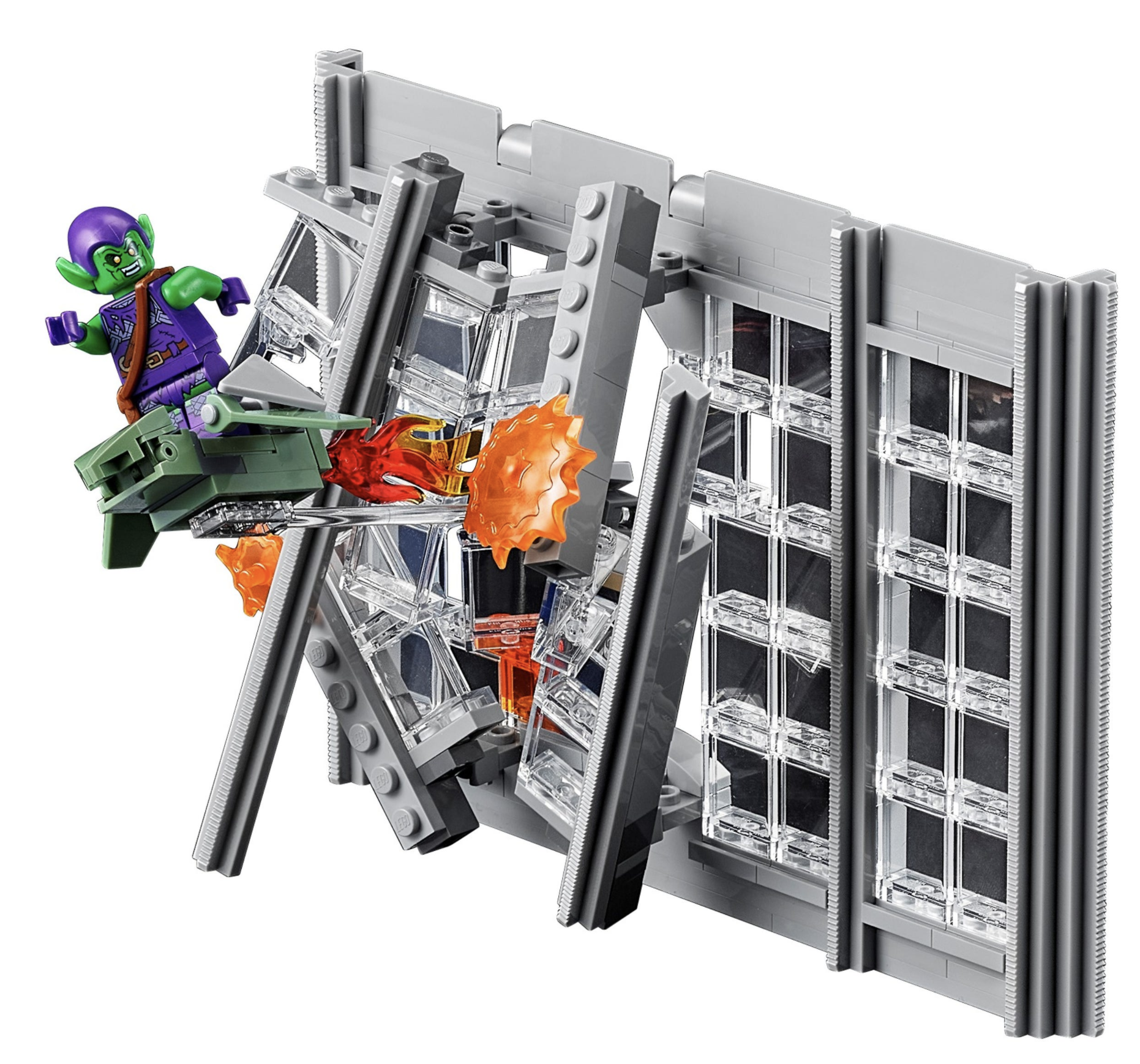 To counter the heroes we, of course, have to have an assortment of villains, too! Some of the most iconic Spider-Man heroes are packed into this set – including Green Goblin, Sandman, Venom, Carnage and Mysterio. All of these minifigures come in their most up-to-date formats – with all of them, again, being available in an assortment of the other more current Marvel Spider-Man sets which have been made available. This set aims to, much like with the heroes, bring all of the villains together in one easy-to-obtain package which I really appreciate. Of particular note, in my opinion, is the cool sand element which is used for Sandman’s lower body instead of legs. This creates a really fun sand effect which makes for a very unique minifigure. Whilst there could have been some more unique villains included in this set, I think there is a good assortment of different characters here with some very desirable minifigures. We’re about to talk about the most desirable figures, however, as we are going to end this article with a look at the brand-new minifigures for this set! 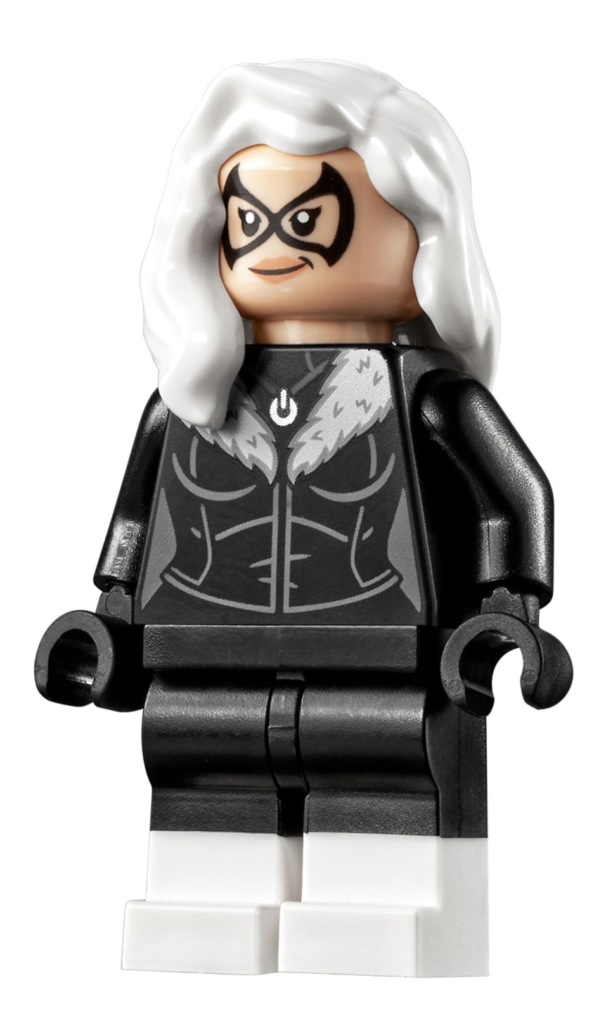 We’ll start with one of the less-interesting new figures in my opinion – which is J.Jonah Jameson. LEGO lists this version of Jameson as new because it does use a brand-new torso print – adapting on an age-old LEGO torso print to get rid of the exposed skin which used to be present at the shirt’s collar. The figure also features a brand new faceprint (seen here) which has the mouth webbed up by Spider-Man – which I think is a really nice touch. This is definitely a more unique version of Jonah which is nice given his re-emergence in the MCU more recently. Another new figure here is Firestar – who comes complete with a gorgeous red hair piece. Whilst this figure isn’t listed as brand new by LEGO, I haven’t been able to find reference to her anywhere else – even though I thought she had been an SDCC exclusive at one point in time. Whether this remains the case or not, this still makes her a ‘new’ figure for the vast majority of LEGO fans – and some great detail in her print work combined with that great hairpiece really makes her worth acquiring. She is accompanied by another iconic character in the Comic Books – Black Cat. This is an interesting character who does have a relationship with Spider-Man at points in the comics, and is present throughout many forms of the Spider-Man extended media, too. This is a welcome addition to the line-up of characters here – adding a brand new character who is symbolic for Spider-Man. 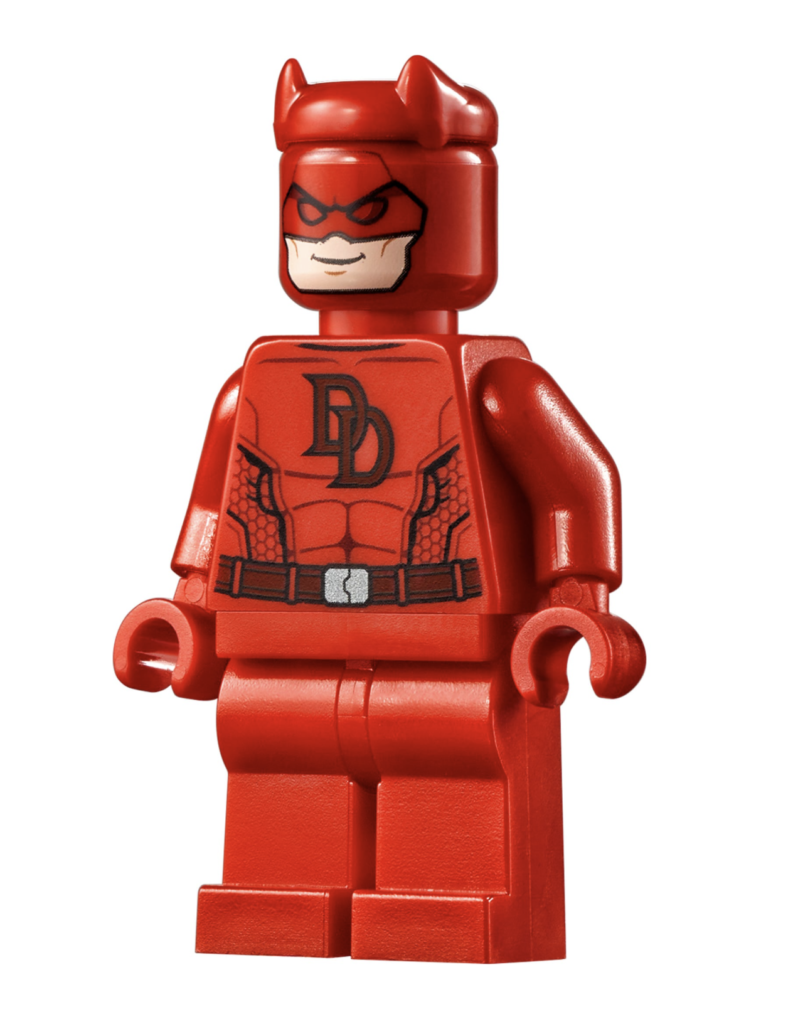 Lastly on the minifigure front are three who fit the 18+ moniker of this set – and are three additions which I was VERY excited to receive. The first is Blade – the Vampire Hunter. Blade has had a Marvel film in the past which was dark and gritty, and his Comic Books have always been more on the gorier and more visceral side. Whilst he isn’t currently a part of the MCU, he is absolutely an iconic Marvel character – and is a very welcome addition to the roster of minifigures here. Give him the new Sam Wilson hair from the Marvel CMF wave and you have a perfect minifigure in my opinion! Then, to end our roster, we have two minifigures which fans have wanted for years – Daredevil, and The Punisher. Since Marvel burst onto Netflix screens a few years ago with the first season of Daredevil, and subsequent seasons of both Daredevil and  Punisher, these characters have only grown in popularity. Iconic for their more intimate, brutal fighting styles, these are two characters which fans have wanted from LEGO for years – with Daredevil frequently teased as coming in the future. It is fantastic to finally have these figures joining our collections – and I love the fact that Marvel went with the faithful Comic Book renditions. This hopefully opens the door to even more characters in the future – including Luke Cage and Jessica Jones. This set really has opened the doors for lots of minifigures in the future. 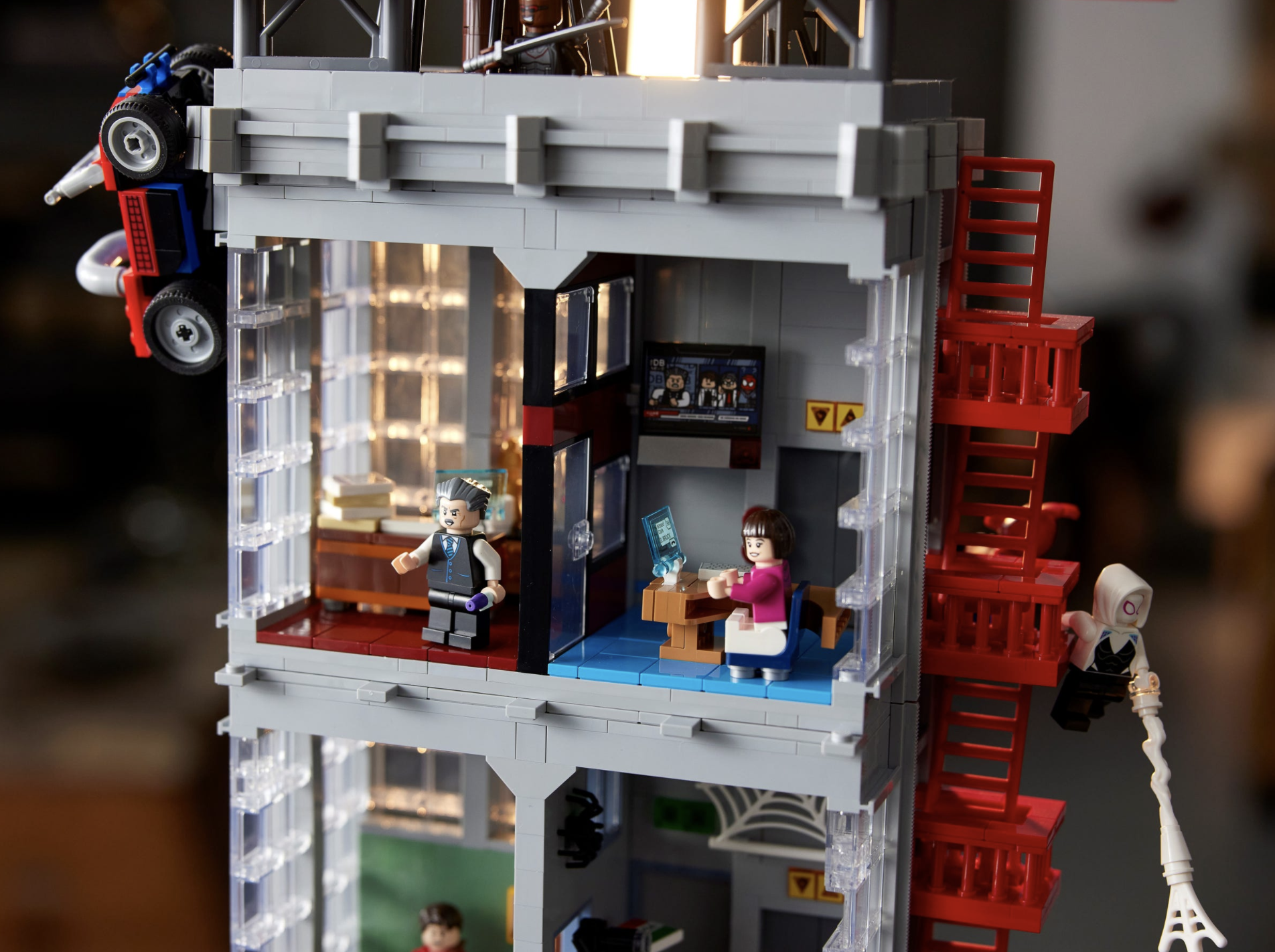 So, the Daily Bugle Minifigures are a diverse bunch – with lots of characters grouped together to create an assortment of players which feel diverse and symbolic of the Spider-Man IP. It is clear a lot of love went into this set – and the minifigures really help to further underpin that fact. With all of that said – this has been my breakdown of the Daily Bugle Minifigures, but I would love to hear your thoughts. Do you have a favourite design? Or do you think a minifigure was missed?

Let us know what you think in the comments below, and click here if you would like to read more of my work.