And Part 4 begins. Fun Fact, Brickset has 2 pages worth of sets for The LEGO Batman Movie! So I shouldn’t ramble on, but it’s hard to do so when I’m so passionate about a theme!

I didn’t think I’d need a disclaimer for these articles, but I guess I’ll have to do one to save both of us a lot of time. There is one Batman figure that appears in nearly every single set in this wave, there are slight differences due to a few variations of faceprint. Instead of wasting both your time and mine to address these minor details, I’ll just state that it’s the ‘same’ Batman figure with one of the many face variants. The same thing will apply to the generic Robin and Batgirl figures from this wave.

I think this is one of the first sets that I saw when the first wave was revealed. And this was the one I wanted the most. Both Batgirl and Joker were the same variants as in previous sets. However, Harley Quinn was new and perfect. She was given a new hair mould which looked spectacular. The red and black colour scheme meshed so well, and her faceprint was so comic-like. She was given an emo-styled torso, with a printed spike Neck Choke on the torso. She received skull printing on both her arms which were amazing. And it didn’t stop there. Her legs were too printed. She was decked out in printing and I genuinely am impressed by what LEGO did. She was even given a printed bat piece as a weapon!

I really liked the lowrider, but when I found out that this set was $50 USD, I completely backed out. This looked like something for $30 which is why I was on board. But it was just a little expensive. The main play feature involved the suspension at its wheels, which allowed it to bounce up and down as it moved. The trunk could be opened and under the back screen were two Technic pins that could be pressed down to launch spring-loaded missiles from the boot. Overall, it was a very nice looking set, but from what I can see, it looked like $20 USD too expensive. 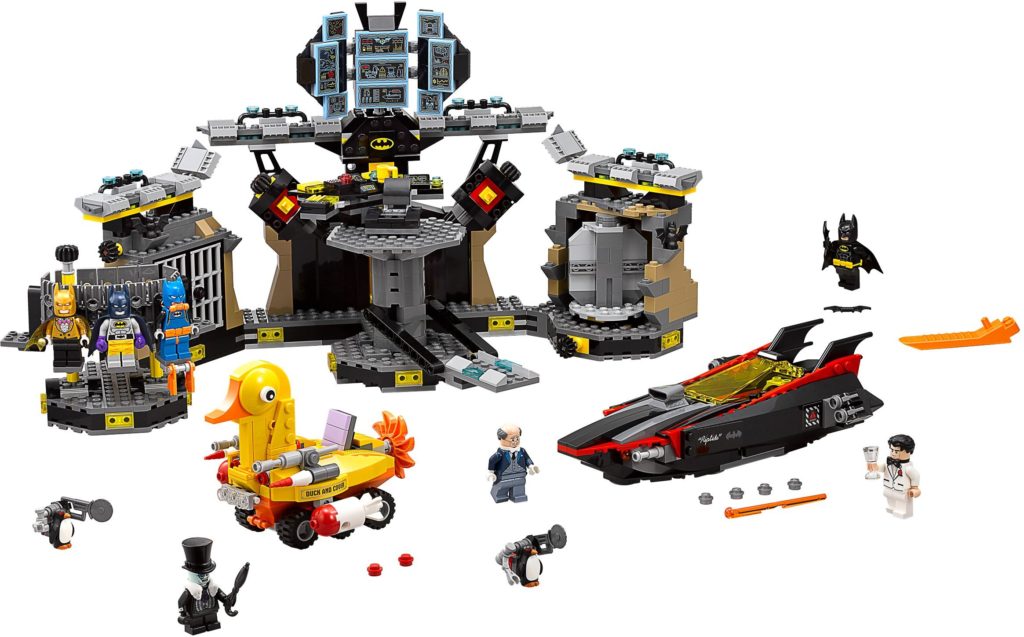 This was such an action-packed set. It came with a whopping 7 Minifigures so let’s dive deep into them!

As I stated before, the generic Batman in this set was just one of the many variants released in the wave. However, we got three other Batsuits in this set. We got a new Scuba Batsuit in this set, with the cowl piece mulled in blue. Under was just a plain, white face. The printing was extremely simple on this one – only on the front and back of the torso. However, the suit came with four attachments – a scuba mask, a scuba belt, and two flippers. The Raging Batsuit was also pretty cool. It had one of the older cowl moulds in dark blue, and the same with the cape. Again, it came with a blank, white face. The torso was also quite simple, but it was cool to receive boxing gloves in purple. The legs were dual moulded and printed to represent shorts. The final one was Bat-Pack Batsuit. This was a more formal Batman, with a golden helmet, and again a white head. The torso was very fancy-looking, and we got a gold and black dual-sided cape. The suits were cool but they didn’t really interest me. 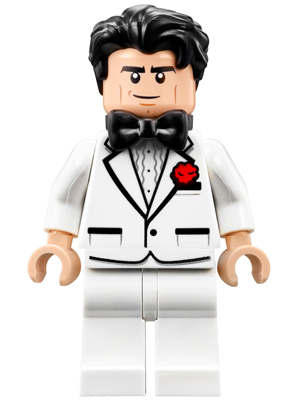 Bruce Wayne was included with a new hairpiece – similar to the Superman one from the Batman vs Superman sets. His head perfectly matched a cocky, rich and successful man. His torso was a white suit which made him look dashing. To top him off, he was given a bowtie and a glass. 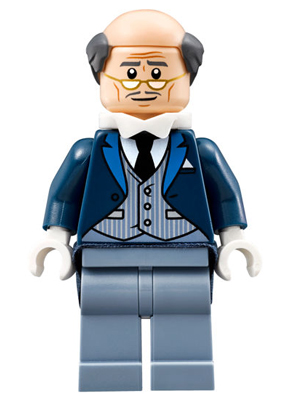 Alfred was an amazing addition. I really wanted this set, just for him. He was given a new hair attachment – our first bald hairpiece. Well, technically the piece wasn’t fully bald – it had hair moulded onto the sides. It was a really cool piece – and very unique. His faceprint was very fitting. However, something always confused me about this Minifigure. LEGO printed a suit for his torso – and that too, a very elegant design. And that suit print, obviously had a tie detailed onto it. So why on earth would LEGO also provide a bowtie piece for him? They literally gave him a tie and bowtie to wear at the same time! It’s like wearing slippers and then shoes on top. Like it makes no sense. Maybe I’ve never heard of this fashion trend before, or maybe the bowtie was supposed to represent his collar. I don’t know their thought process here but as of 15th July 2021, I have never come across a person or picture which has incorporated both onto an outfit. Ok, my rant is over.

The final Minifigure of this set was Penguin. He got his iconic top hat and a very ugly face. His torso was cool too, and he came with an umbrella. Oh yeah, two robot penguins were included with attachments to represent his killer penguins.

Now the set itself. It was pretty good actually. I’ve seen few people hate on it, but I genuinely think it was cool. To get out out of the way, we got a pretty decent Bat Boat. The opening cockpit could fit one Minifigure. There were two stud shooters on each side, with two hidden spring-loaded shooters. The Penguin also had a duck raft. With two flick-fire missiles and a rotating rotor at the back.

On the right was a transformation chamber for Batman. You can place Bruce Wayne at the front, and then Batman at the back and turn a knob at the front which would make it seem like Bruce transformed into Batman in an instant. On top was just a walkway. 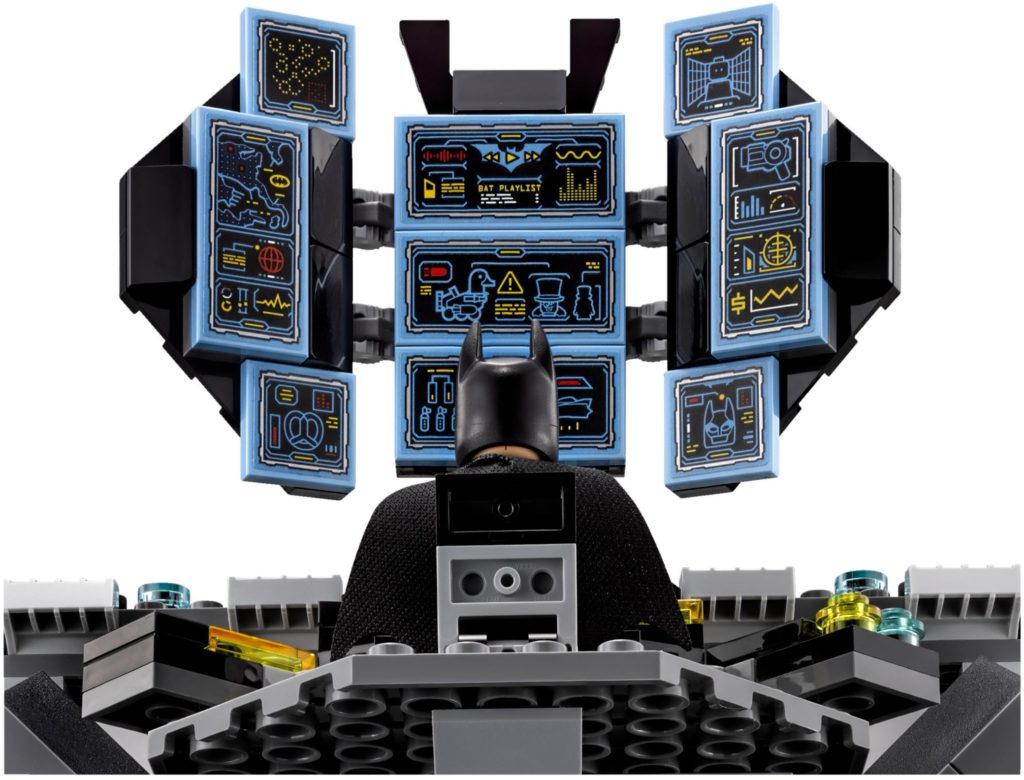 The middle was pretty cool. There was a massive Bat-Computer. There was a control area with a spinning chair and panels. Two side attachments could be turned to reveal accessories for Batman. Finally, there was a Technic play feature that allowed you to lift a figure off the ground onto the elevated platform.

Finally, to the left, we get a dual jail cell. Behind was a Technic piece that could rotate – breaking the back of the cells to let Penguin escape. Next to that was a rotating suit rack for Batman. You can turn a knob that would rotate the whole rock of Minifigures. There is extra space to place other Batman suits from this wave. This Batcave had very unique play features compared to previous versions – especially with the lift and the suit rack. This was a good set for $100 USD.

And that’s it for today’s article! Both were really cool sets, and I may just buy the Lowrider used on eBay or Bricklink because I really want that build. Anyways, take care, thank you for taking your time to read, and I’ll see you guys next time!