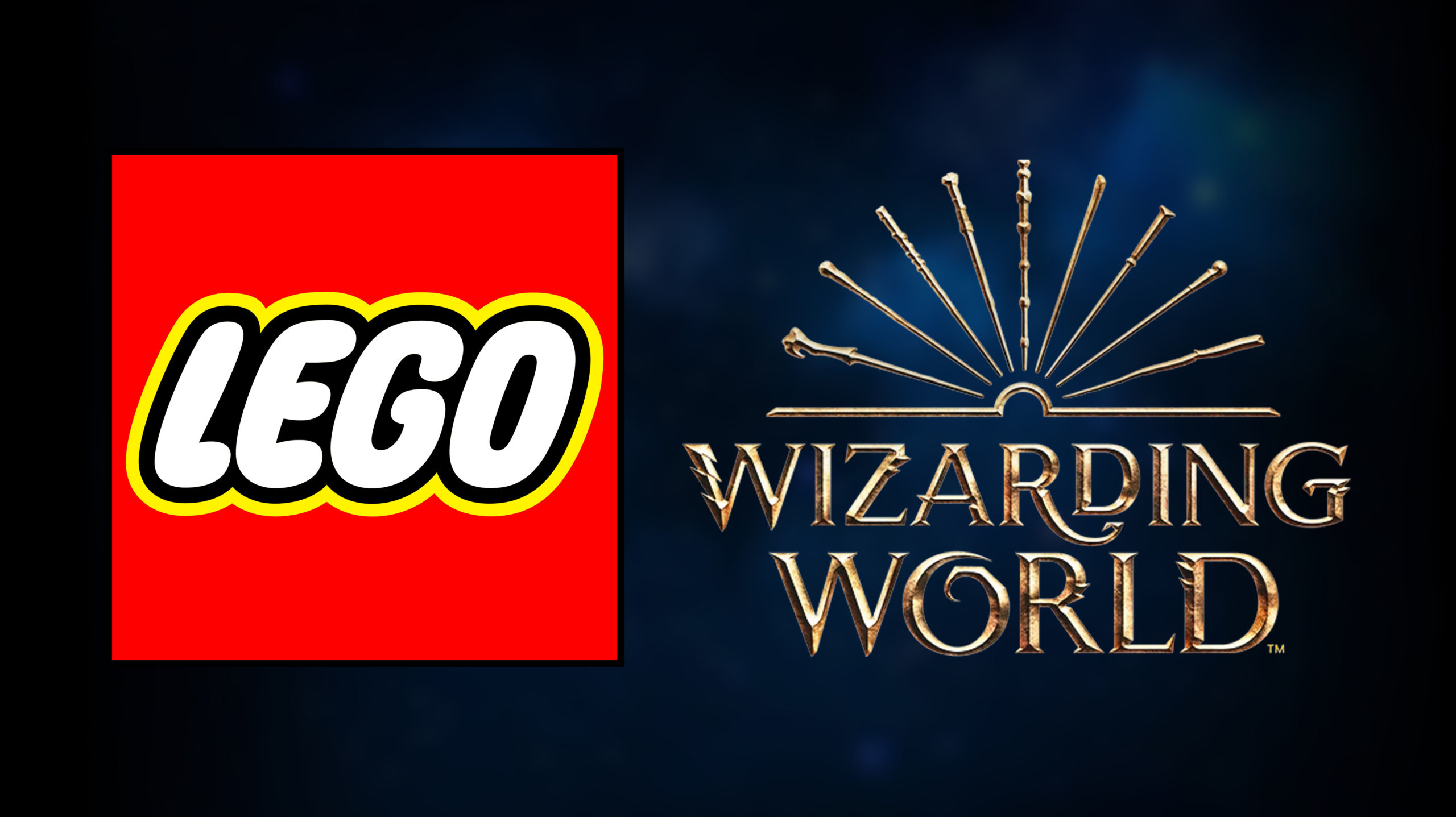 , as The Lego Group have just revealed the latest wave of sets which will be available from June of this year.

LEGO’s latest assortment is a reflective wave looking back at their relationship with the Wizarding World – combining an assortment of different sets which all come together under the ‘LEGO Harry Potter 20 Years’ subtitle. This means that many of the sets take more unique formats than those in the past couple of years – and it also means that many of the sets pay homage to The Chamber of Secrets. Another addition is a Golden Minifigure in each set – providing an extra collectible for fans who have backed this line since the beginning.

Without any further ado, let’s dive into the brand new sets! 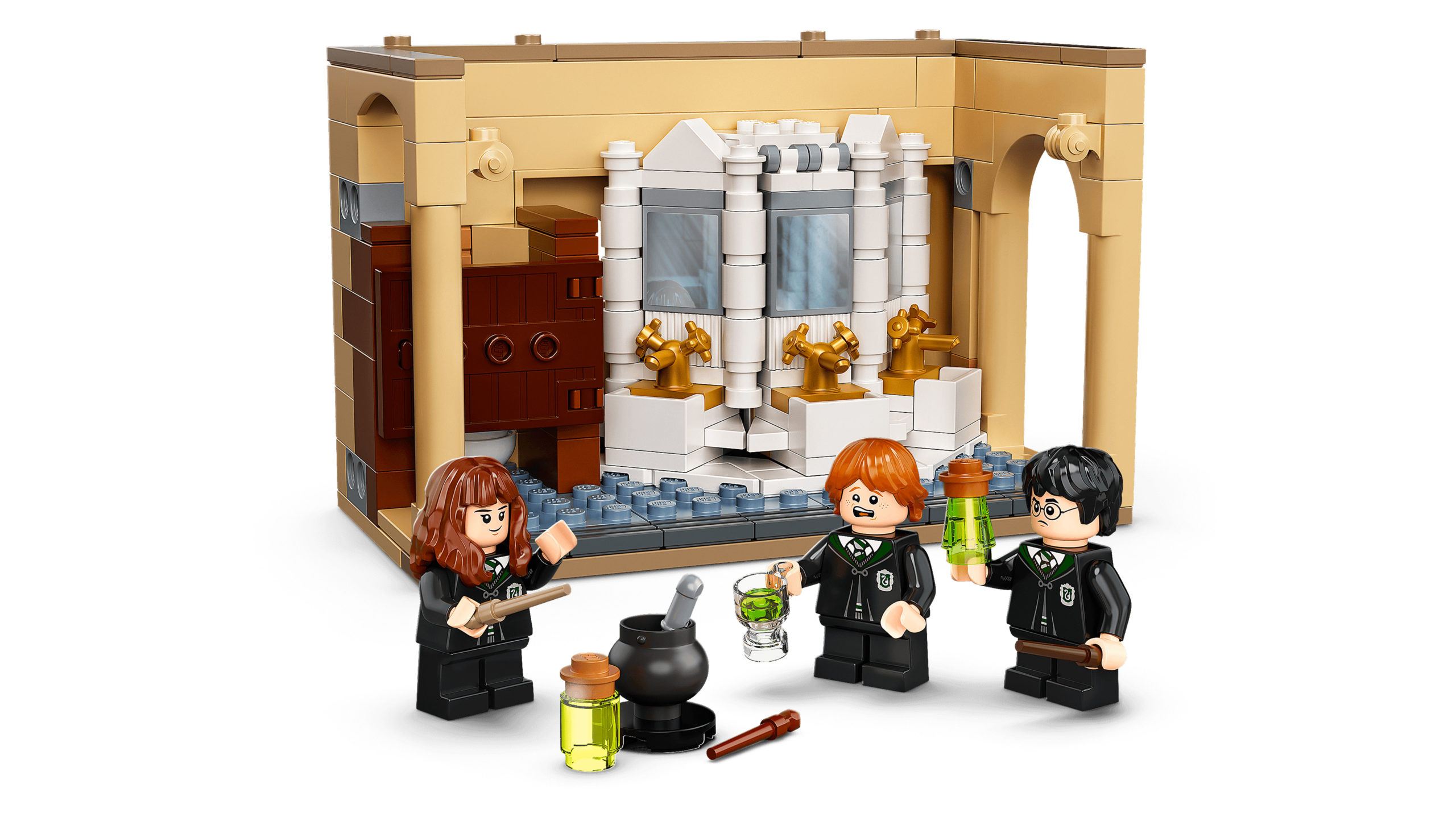 The first set we have is Hogwarts Polyjuice Potion Mistake – a great, smaller build of the girl’s bathroom from the earlier films with lots of detail packed in for the central sink area of the room which comes into effect in a big way later on in the second film. Also including is a wonderful new minifigure of Hermione Granger who comes with an alternate cat head from when her Polyjuice Potion goes wrong, and Harry and Ron also come with alternate faces for when they disguise themselves as Crabbe and Goyle – complete with brand new Slytherin robes.  Throw in a plethora of fantastic accessories included a glass with printed green Polyjuice potion, alongside a unique gold version of Harry Potter, and we have a nice set which also introduces the brand new modular system for Hogwarts sets in the 2021 wave of LEGO Harry Potter products. 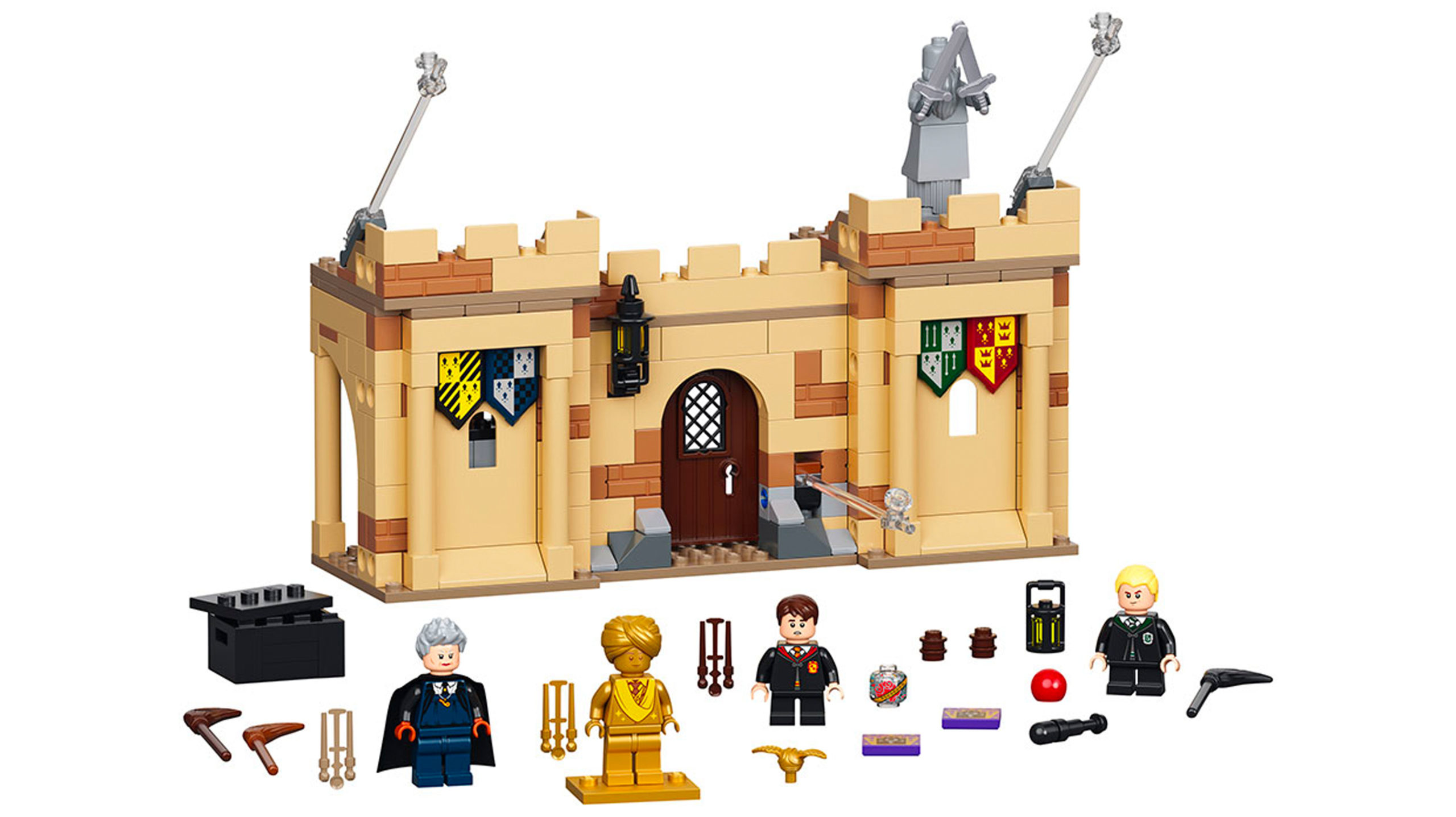 In a similar smaller-scale format to the Polyjuice Potion Mistake is also Hogwarts: First Flying Lesson – a fantastic set which is packed full of unique accessories themed all around Quidditch within the Harry Potter universe. This is a wonderful little build which includes nice versions of Neville Longbottom and Draco Malfoy, and also includes a fantastic variant of Madam Hooch – allowing fans who missed out on the Bricktober pack with another chance to get their hands on this figure. Combine this with a nice build of a portion of Hogwarts with some great elements to allow fans to simulate broomsticks ‘flying’, and a decent enough interior with a really nice build for a trophy display case, and you have a fantastic set which represents one of the initial moments in this series of films which captured the imagination of so many across the globe. 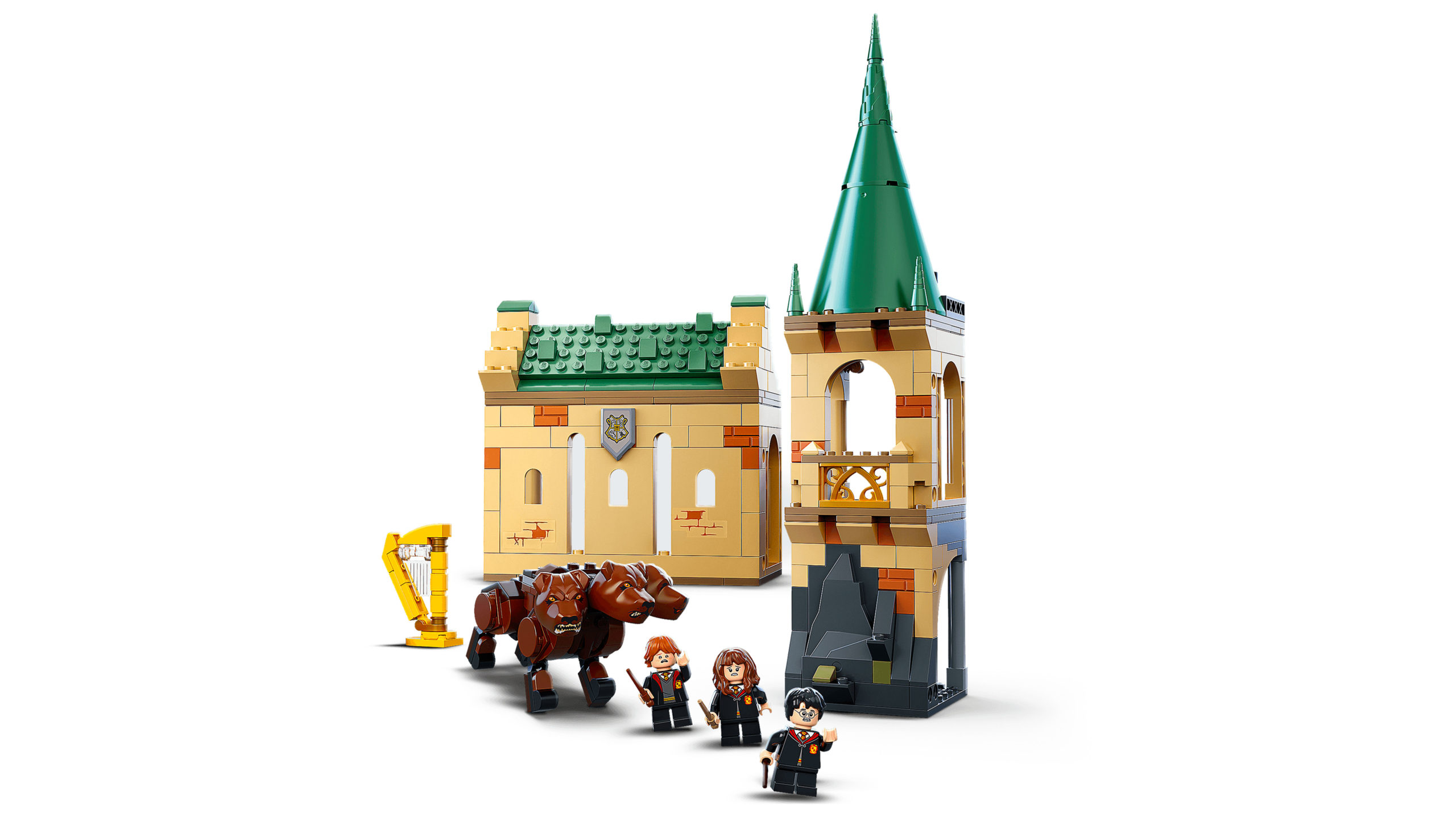 Up next we have another set which aims to capture an iconic moment from the first Harry Potter film. The inclusion of the original three characters in their Hogwarts robes is nice, and I also appreciate the inclusion of nice details like the harp for Fluffy – as well as the Golden minifigure of Hermione which is included. I am not a huge fan of the modular layout for this particular section of Hogwarts, however, and think that the half brick-built and half moulded approach for Fluffy doesn’t quite nail the appearance of this animal from the film. I feel like LEGO have taken a fun attempt at capturing an iconic moment in this set, but they haven’t quite stuck the landing – and so the set ends up missing a little something when compared to some of the other new sets available in this year’s line. 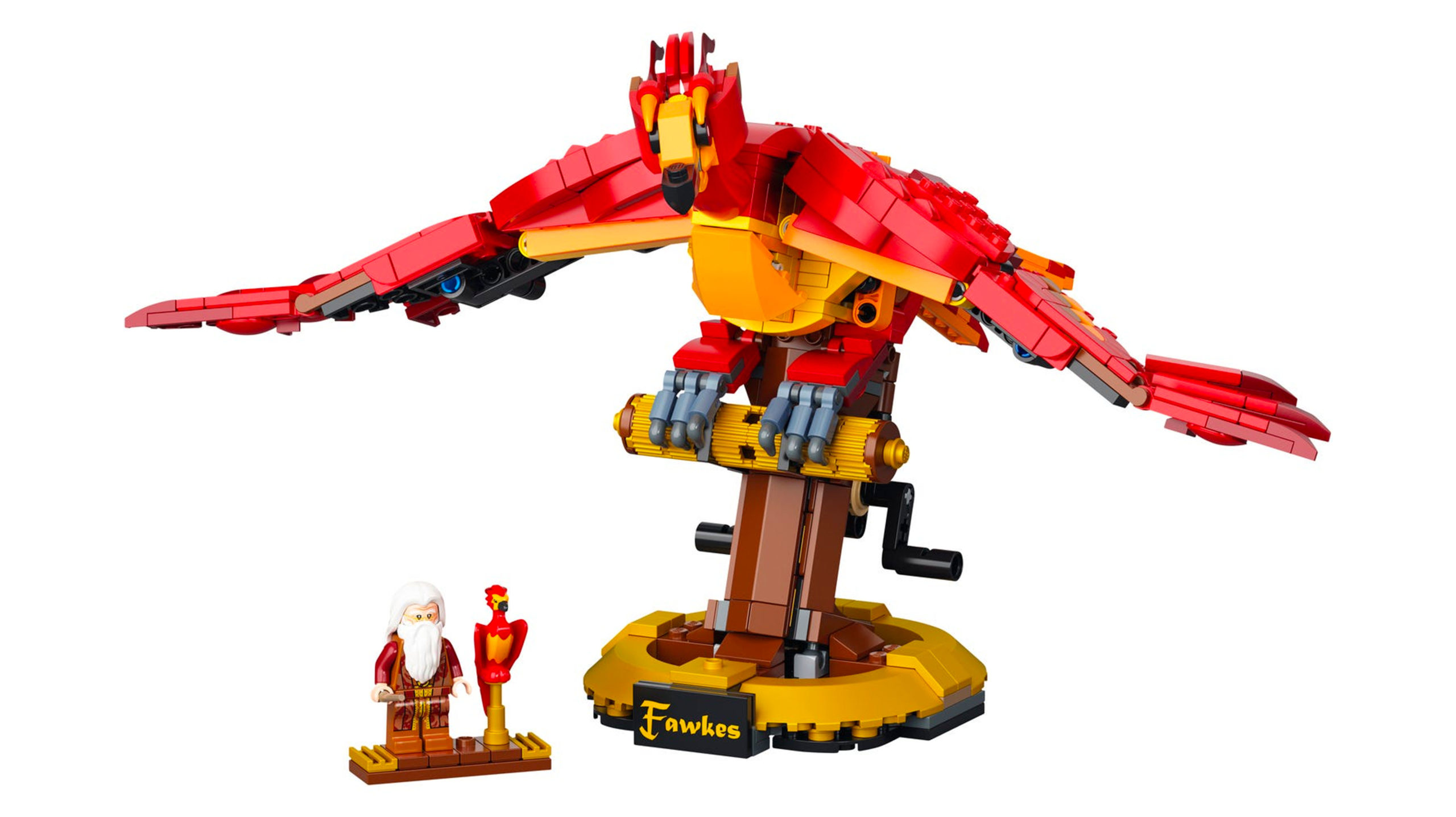 Following on from this is a really nice unique build – a brick-built interpretation of Fawkes, the iconic Phoenix who appears alongside Dumbledore in several of the Harry Potter films. I think the build for Fawkes here is achieved really well – with some great colour choices made to capture the really vibrant colours of this animal in the film. I also think the play feature packed into this set is done in a really subtle and visually appealing way. It creates a smooth build which feels more akin to a display piece than something with obvious play features packed into it. 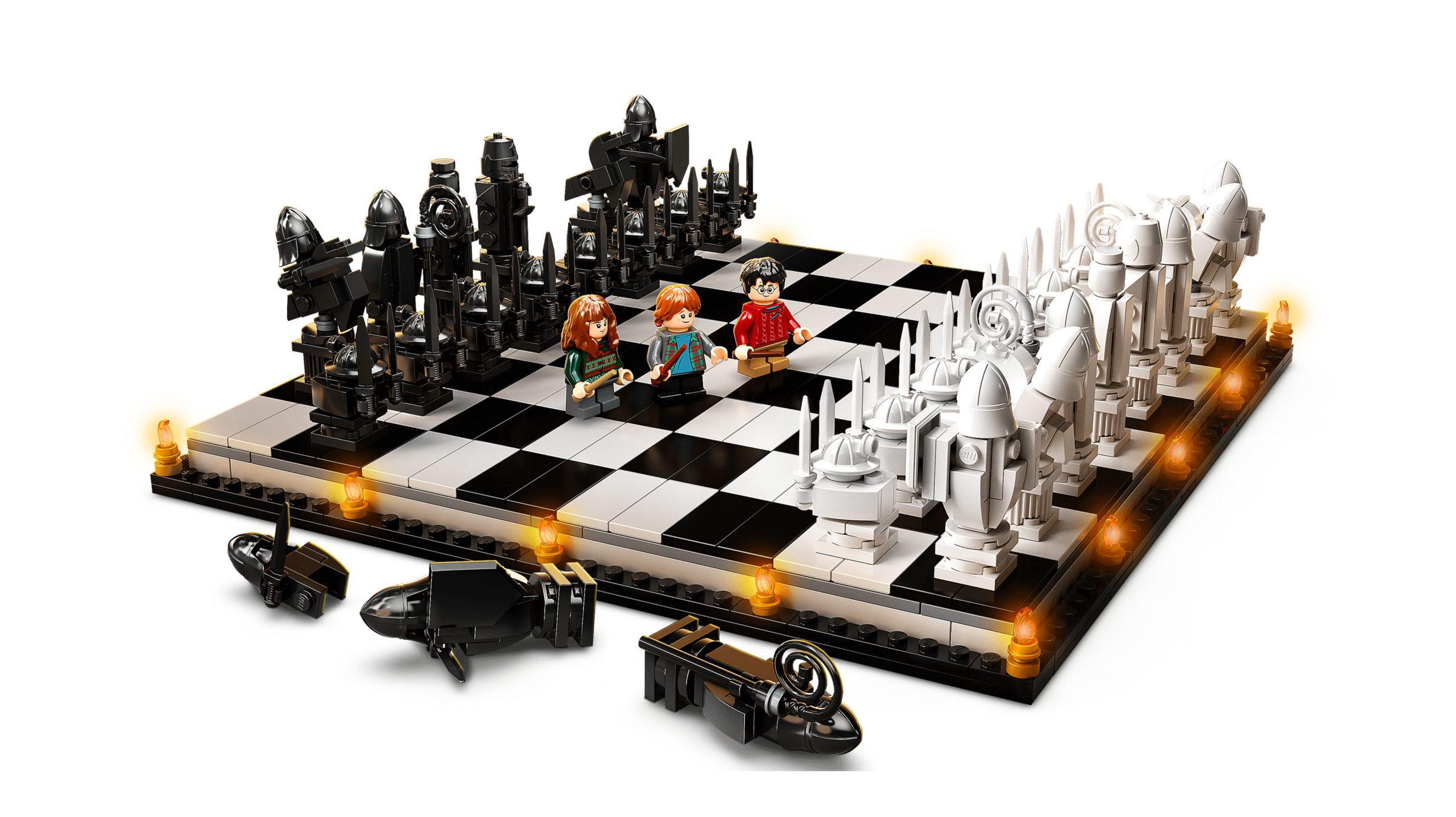 Up next, we have a fantastic interpretation of giant chess board which we see in the first film – including some fantastic micro-builds to represent the chest pieces as they appear on screen. This will be a great set for fans who enjoy LEGO and also enjoy Chess as this is a fantastic, functional set. I also like the focus on the Collectable Wizard Cards included across an assortment of different sets in this wave as they add a nice additional element of collectability to these sets which, again, helps to underpin the fact that these sets are not normal sets but have been released as a part of a special anniversary. Combine this with some nice minifigures of the main cast, and also a gold minifigure of Snape, and you have a nice set which captures one of the larger-scale set pieces of the film series relatively well. 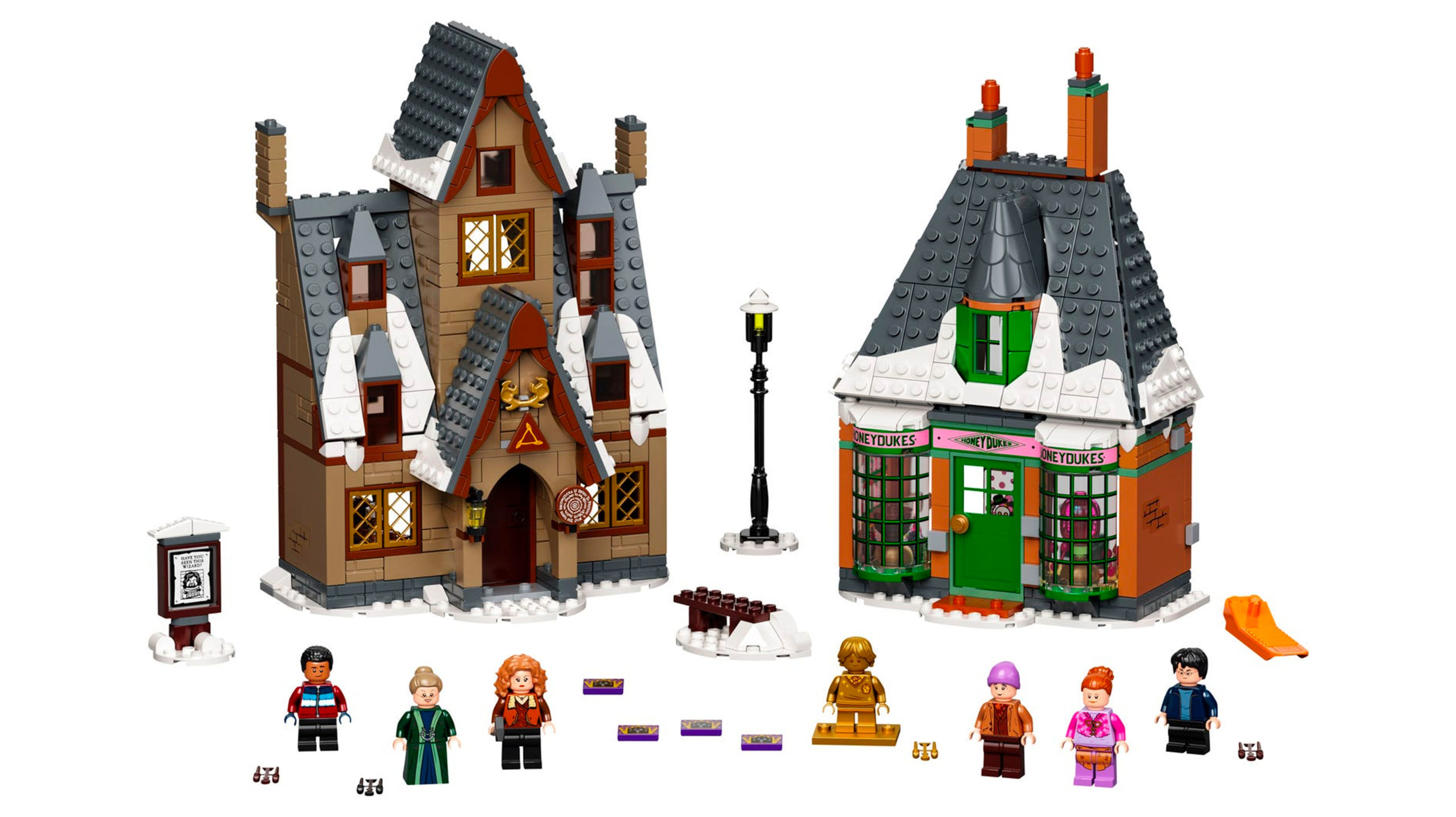 The next set we’re getting is a wonderful interpretation of Hogsmeade – the picturesque village which is just outside the grounds of Hogwarts, and which boasts some of the more charming sequences throughout the saga of films. This set captures two of the more iconic buildings – Honeydukes sweetshop, and also The Three Broomsticks Pub – both of which have a fair bit of screen time in some of the latter films. We get an assortment of fantastic unique minifigures here – including a new version of Dean Thomas. This is a charming set with some really unique builds which I am sure will be popular with fans of the later films, and also fans of the Harry Potter books. 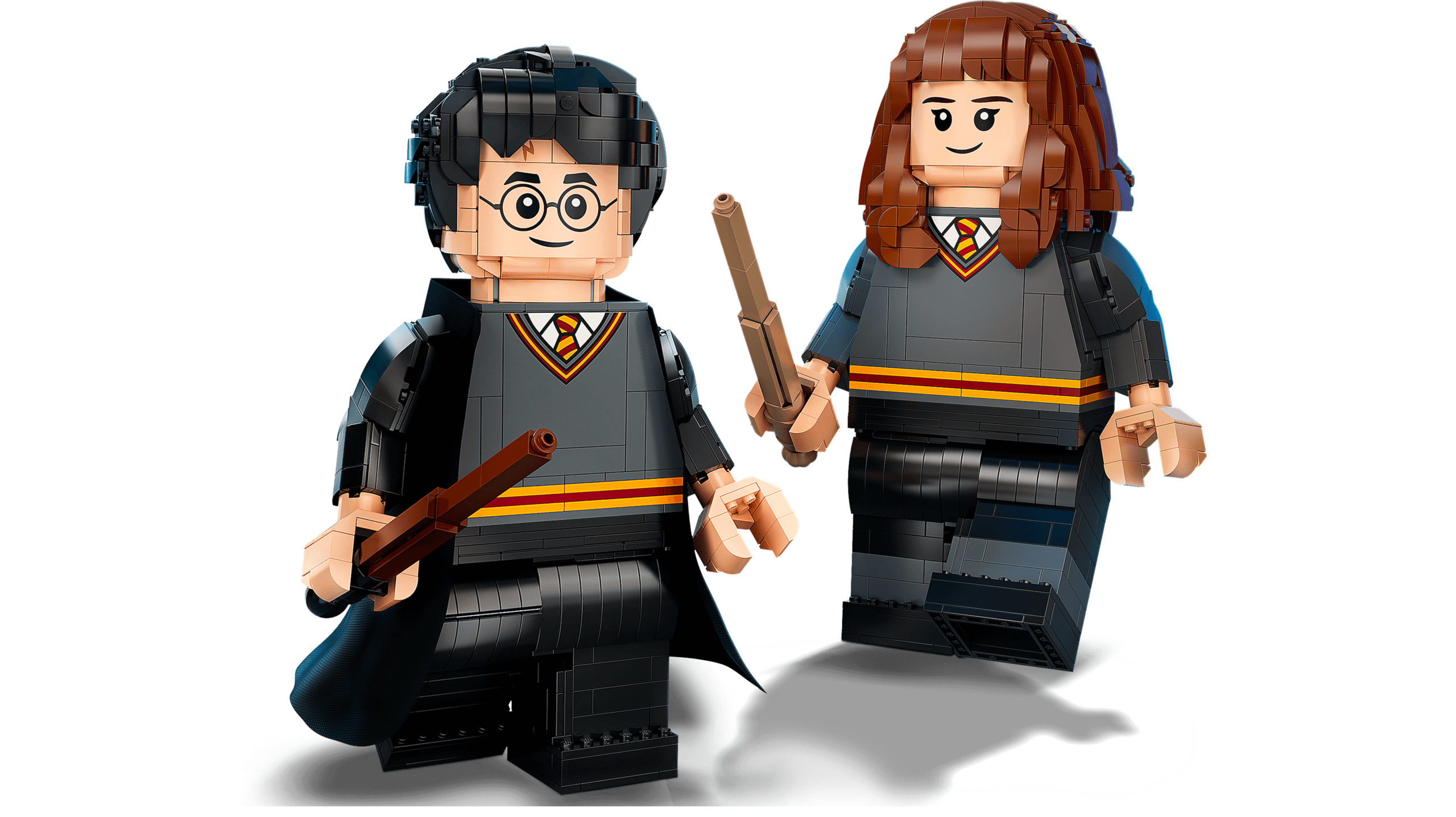 After Hogsmeade, the next addition to the LEGO Harry Potter line is a more unique one – with two large-scale builds of minifigure ‘figures’ of Harry and Hermione. Whilst these figures are charming with their unique printed elements and their characteristically ‘LEGO’ design, I have to admit it feels weird to receive both of these characters without Ron to accompany them. I do wonder if it is possible that more of these ‘character’ style builds will come in the future, depending on how popular they are. The figures themselves aren’t huge but look good enough – so if you’re looking for a more unique display piece for your LEGO Harry Potter collection, then these may very be what you want to pick up! 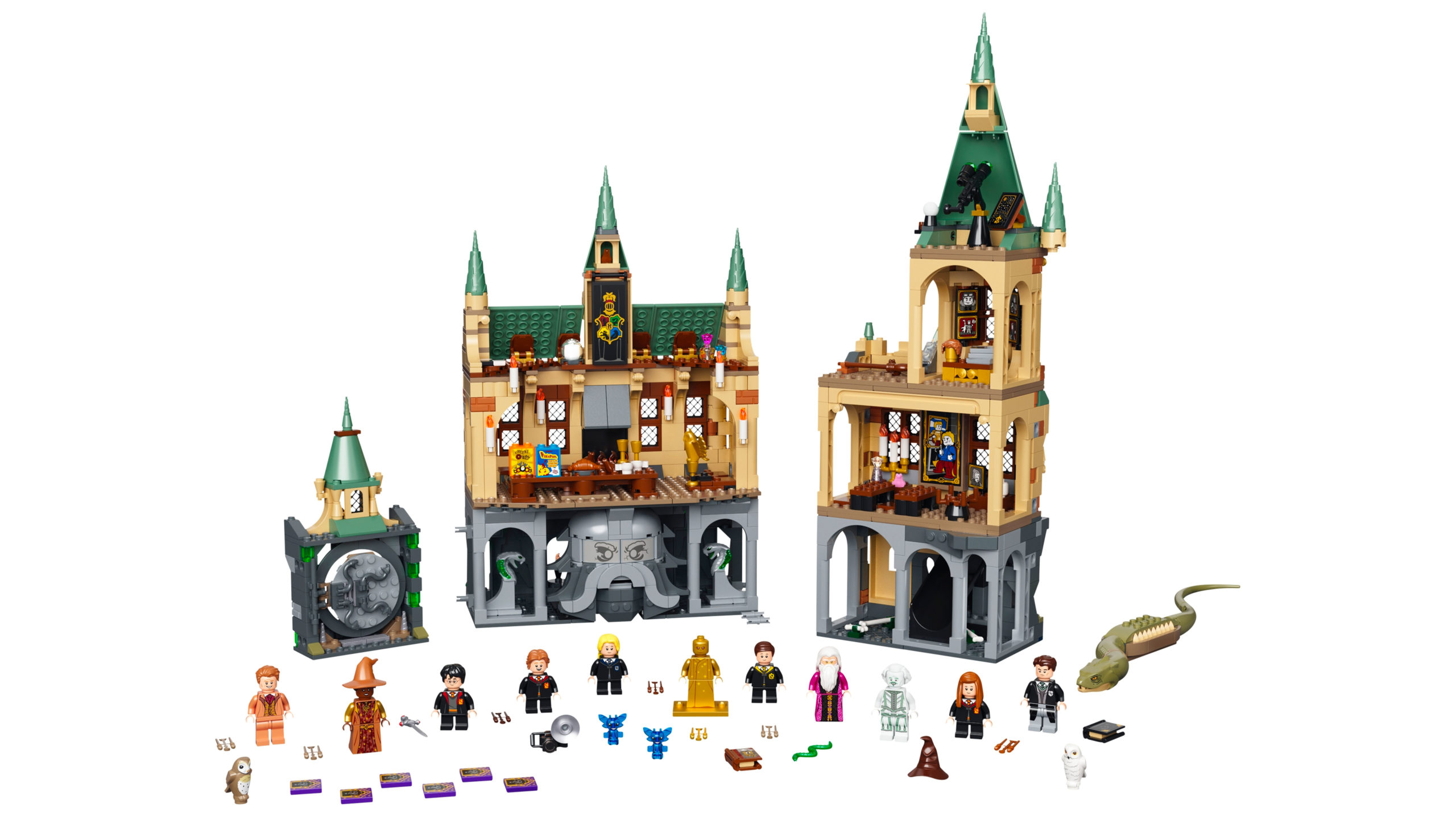 Last, but certainly not least, is the biggest set of the wave – coming in at £129.99. This is the Hogwarts Chamber of Secrets – a fantastic set which incorporates a smaller build of the Great Hall, a Defence Against The Dark Arts classroom, a tower, the entrance to the Chamber of Secrets – and also several elements for the Chamber itself, including a mixed brick and sculpted Basilisk Snake. The builds here use the new Modular style which other sets in this 20th Anniversary Wave, and whilst I like them, I do hope that this does not mean that the other style of Hogwarts is now defunct – as I’ve just bought 3 out of 4 of the elements of that particular series!

There are lots of nice details in this build – including prints, unique moulds for Pixies, and also some unique characters and variants of characters including Colin Creevey, Justin Finch-Fletchley, Professor Sinistra and Dumbledore.

This is a fun set which packs a lot in, and captures the climatic showdown of the second film in a really fun and engaging way. 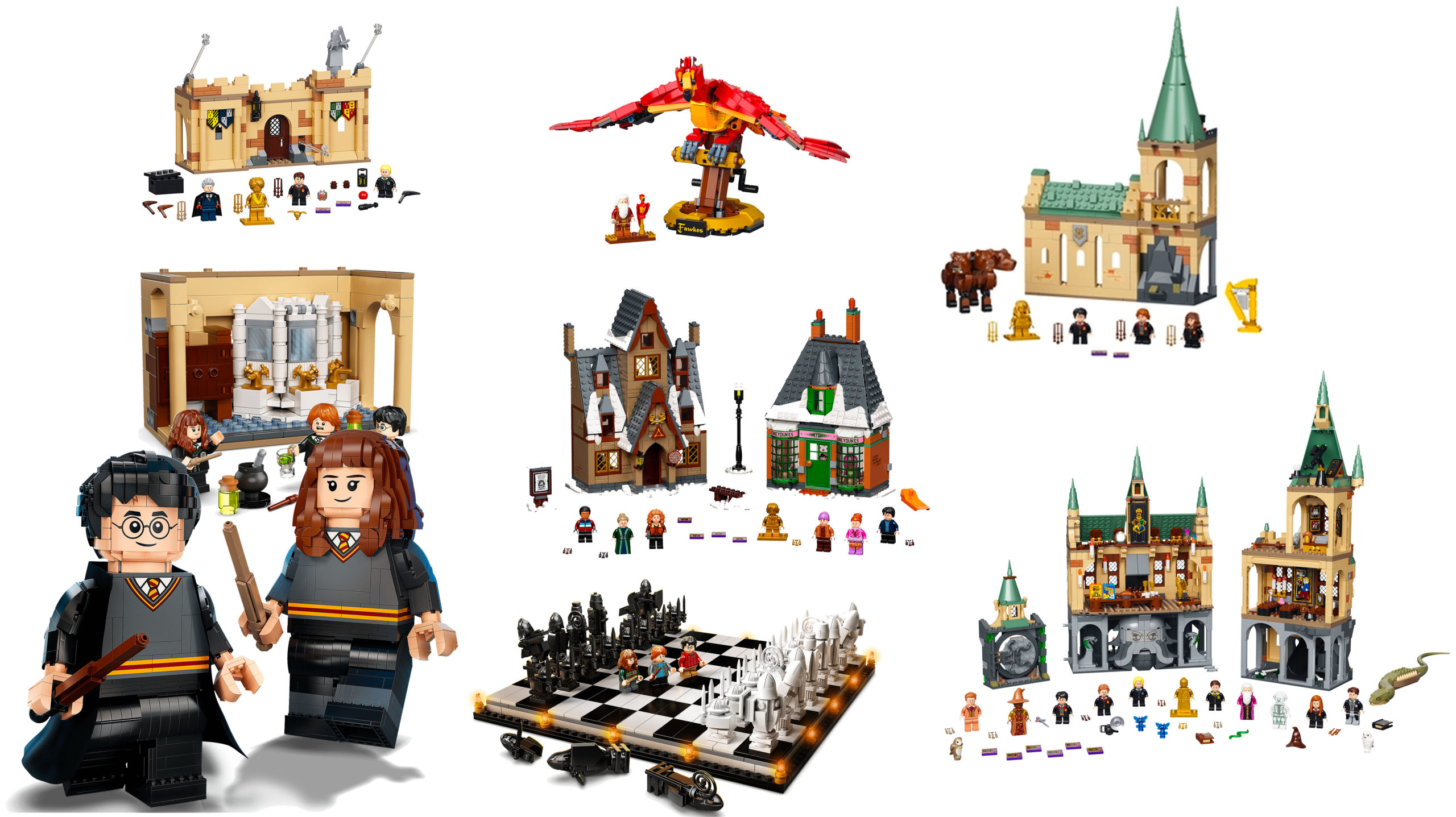 So that’s it for our look at the latest assortment of Harry Potter sets! What do you think of the newest wave? Do you like the new design for the modular series, or do you prefer the older format which LEGO released as a part of the line?

Let us know in the comments down below, and make sure to click here if you would like to read more of my work in the future!