As an amateur student of history, namely the First World War or The Great War (there was nothing ‘great’ about it in my opinion, only a lost generation and decades long scarring to the economy and international relations), I would like to discuss the start of my collection of custom LEGO World War 1 military minifigures depicting British soldiers from the 1914-1918 war. 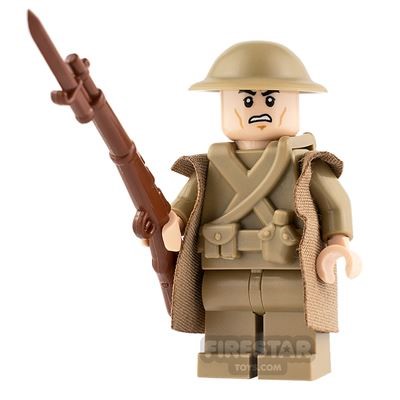 This minifigure from FireStar Toys of Lance Corporal Blake from the Sam Mendes film “1917” captures the look and the style of equipment used by him in the events captured in the movie.

Why British I hear you say?

Well, first of all I am British, in fact, I was born in Sidcup, 16km from London. Therefore, it is logical for me to start my collection of minifigs from this period from the British side.

When starting such a collection, the first thing I noticed was how difficult it is to have a uniformed coloured uniform.  There are just so many different styles of uniform; in varying colours, tones and shades for both officers and men. Therefore, one tip is to stick to dark tan (as used in the minifigure above). A lighter shade such as tan would be acceptable for a different theatre of war, such as, in a tropical country, in a desert, in Africa or India, etc. 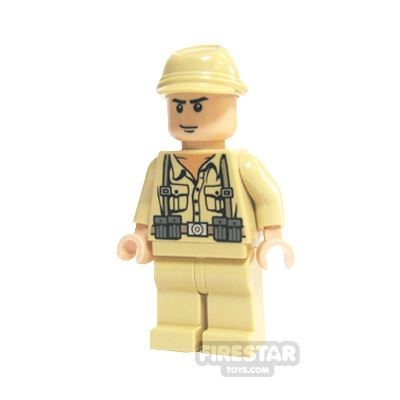 The above minifigure depicts a soldier from the German Afrika Korps from World War 2, and equipped with a light tan uniform.

Different custom minifigure creative teams have their own interpretations of what they consider ‘authentic’ and try to be as historically accurate as they can with varying degrees of success. Some details are very well done, from the printing of the minifigure to the accessories it carries.

Yes, on one hand, I could always mix and match my figures, and this would not be a problem. However, for me it is far better to try to, at least co-ordinate my minifigures so that they look more or less like they are in or from the same army.

There are companies which supply detailed stickers to make your custom LEGO military minifigures. These cover uniforms for the torso, gaiters and puttees for officers and men, and even boots. However, I’d avoid them since it is difficult to apply them correctly, and they do not last as long as a print. There’s also the risk of the sticker color not being coordinated with the torsos, arms and legs available.

For the heads, I try to choose double-expression ones which add more playability – and mustached heads for officers* are a preference. For maximum playability and for multiple combinations of head to headwear and accessories, it is a good idea to have a mixed selection of different and complementary articles.

As for torsos, while LEGO doesn’t make military minifigures (with a few licensed exceptions), some can be used as military uniforms. The advantage of using a dark brown trench coat over a customized torso is that it could add realism. Along with dark brown arms the look will be complete.

Webley revolvers, either in black or gun metal gray, and swagger sticks (I usually use “wands” to resemble these) are a good choice for officers.

The soldiers have Short Magazine Lee Enfield, or SMLE rifles, with or without bayonets, as it’s the standard issued rifle for them. They can also have Lewis light machine guns, US 1917 heavy machine guns and Vickers, heavy machine guns with ammo belts, with tripods and bipods, extra magazines, ammo boxes, ammo crates, rucksacks, grenades, stretchers… the list can go on and on.

There are other pieces of equipment I use as well, like wire cutters, trench tools like spades and pickaxes, and trench raiders’ handheld weapons. These consist of maces, knives, and even body armour which was used and experimented on by all armies, although I have not fitted out my army with any breast plates or other armor plating.

These include gas lamps, pens, bottles, bags, binoculars, food such as bread and sausages, cloaks, trench coats, scarves and kilts for Scottish regiments in the field.

I have to stress that my British minifig army is based on men and machines from the Western front, therefore, any ‘safari style’ torsos (see above) would look good to resemble a uniform. As for exposed undershirts; for the common soldier it was a dark grey long sleeved woolen three buttoned collarless shirt. I chose the ‘Henley’ found from the FireStar Toys site. Plain dark tan torsos with ‘bodywear’ webbing to go over the top of the torso can work, too (as seen in the Lance Corporal Blake minifig). The advantage of a Brickarms bodywear part is that it can be worn two ways as you can see in this photo. There’s also a colored version of it.

Larger Accessories and Articles for Your Minifigures

An additional category which can guarantee endless play and a more realistic feel are crates, sandbags, barrels and boxes.

By no means is this an exhaustive list of what to acquire, but, it’s a good start and will ensure your minifigures are armed, equipped and ready. As all these parts were sourced from FireStar Toys, you can see and appreciate to what extent you can build-on and create sets with authentic looking minifigures. With additional normal building bricks, tiles and plates from LEGO; to create buildings, walls and home objects, there really is no limit to what you can bring to life.

* From 1860 to 1916, the British Army required officers and men to wear a mandatory moustache (Source: Wikipedia).