It’s safe to say that the brand new live-action Star Wars season, ‘The Mandalorian’, has taken the world by storm. Fans of the show have praised it for its grittier take on the Star Wars universe – and many elements of it, like Baby Yoda, have already begun to engrave themselves within the Pop Culture Hall of Fame. Combine that with the popularity of the LEGO Minifigure of the Mandalorian (and anticipation for the upcoming Mandalorian battle pack) and it is safe to say that there is a hunger for all things Mandalorian within the LEGO world.

I wanted to break down some of my favourite Mandalorian-themed accessories. We’re going to cover a vast array of different elements in this blog post – all with the aim of leaving you with something cool which you want to make your next person! So, with this considered, let’s jump straight in!

Vambraces – Practical, and cool as hell! 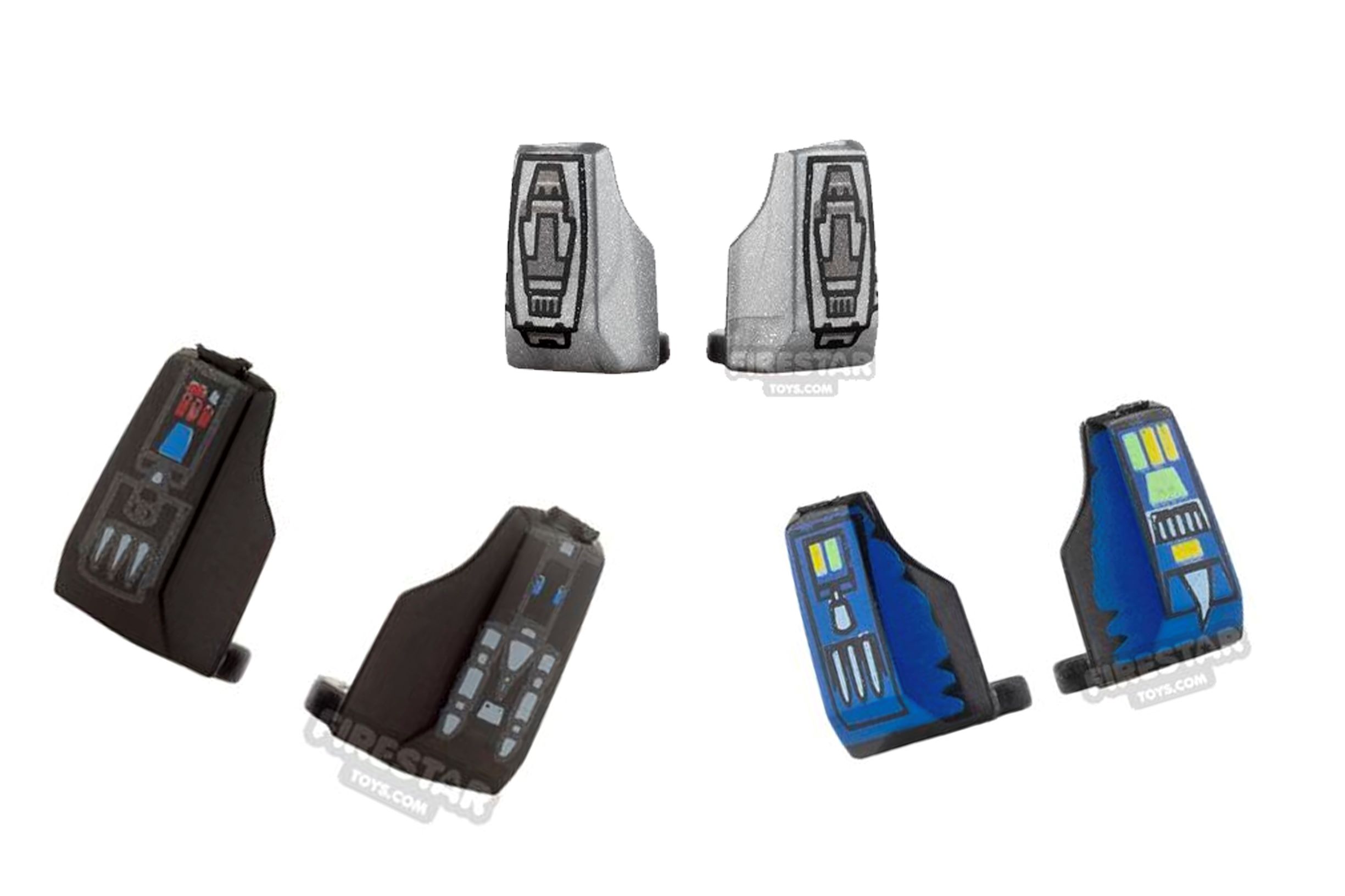 The first thing I wanted to touch on is something awesome which I have only recently picked up myself – Vambraces, by the amazing team at Arealight! The Vambraces on offer come in a variety of different colours, and each of the printed variants will have a uniquely styled print which represent different pieces of technology which a Mandalorian may have on their gauntlet. The Wren pair, for example, have a cool looking detail on the left-hand side which almost looks like three rockets sticking out of the tip of the Vambraces. Other models – like the ‘VIZ’ style, have different colours and prints altogether. There are even pairs which just have subtle details – more so you can add an extra element of armour to your Mandalorian figures than anything else.

Locking around the wrist without prohibiting it from fitting within the minifigure’s arm, these are a fantastic small piece which can do a lot to make your LEGO Mandalorian minifigures look even cooler than they do already!

A Weapon for Every Gunfight 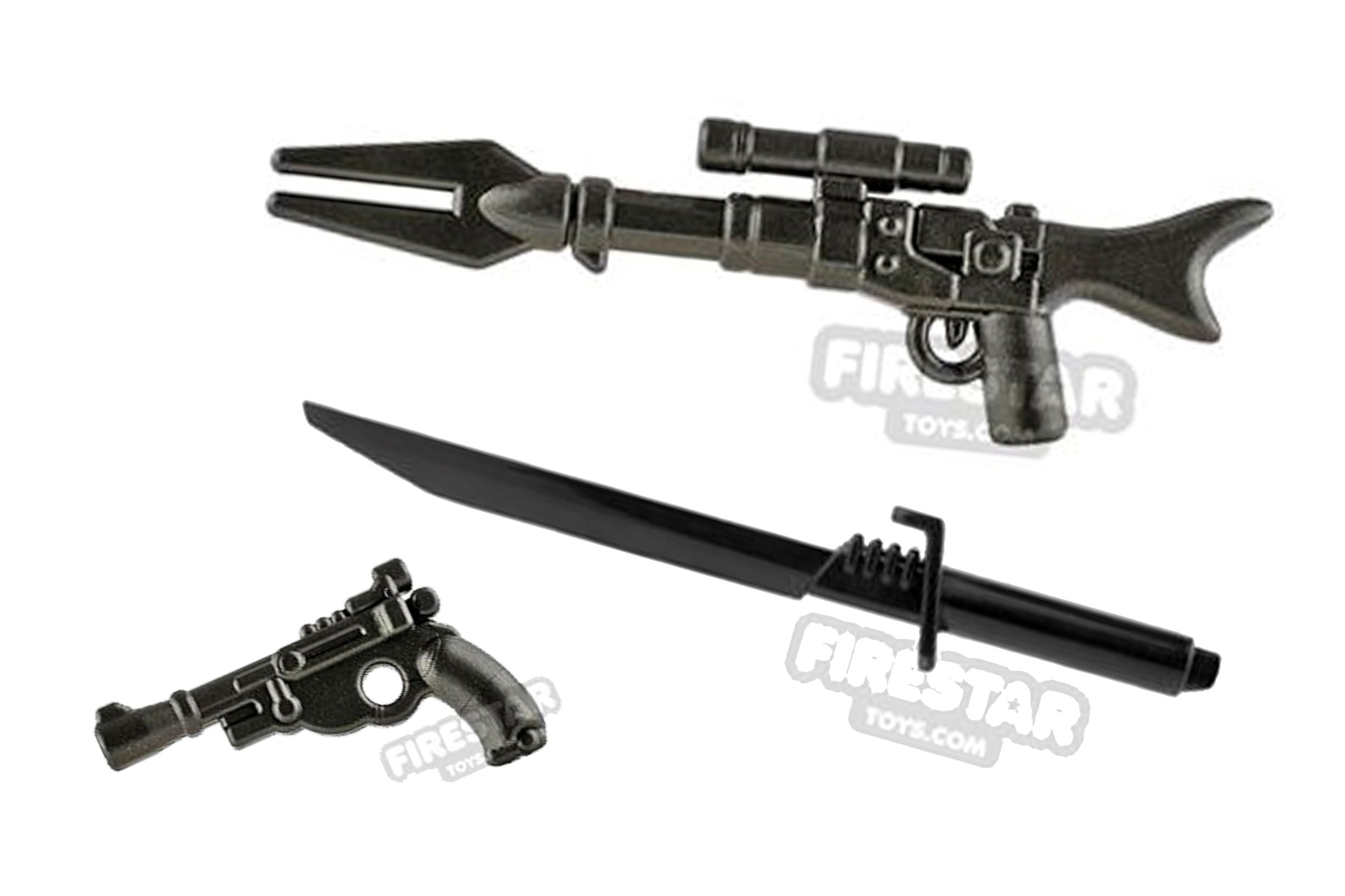 It’s safe to say that cool-looking wrist armour isn’t the only essential ‘must have’ for a Mandalorian – with an effective and reliable blaster coming in at a close second. Some of my favourite offerings come from Will Chapman and the team at BrickArms – who have really added a real depth and breadth of Science Fiction offerings to their weapons line-up in recent years. In fact, the team created two weapons specifically for ‘The Mandalorian’ – both introduced as ‘Gunfighter’ weapons. The Galactic Gunfighter Pistol captures The Mandalorian’s more-traditional revolver-style weapon with an absolutely breath taking level of detail.

This is a real testament to how far Will’s work has come in the past few years, with crisp lines really making the details on this pistol pop. Accompanying this is the BrickArms Galactic Gunfighter Rifle – featuring all the same intricate detailing, but with the addition of the forked barrel, long-range scope and sturdy stock which make this weapon more suitable for ranged combat.

If neither of these take your fancy, however, then BrickArms have produced an assortment of different weapons and accessories which may suit your needs. The E-11D is a good example. Traditionally a weapon favoured by Death Troopers, this is certainly a weapon which could be re-purposed by a would-be Bounty Hunter. Or, why not choose from Arealight instead? Under their great ‘Weapons’ selection they offer the fantastic ‘Darkblade’ – the weapon of choice for any Mandalorian looking to live up to their legacy and take their place in the galaxy. Whatever you like, it is safe to say that there are some fantastic weapons out there for your Mandalorian minifigures to make use of!

The Right Headgear for The Right Job 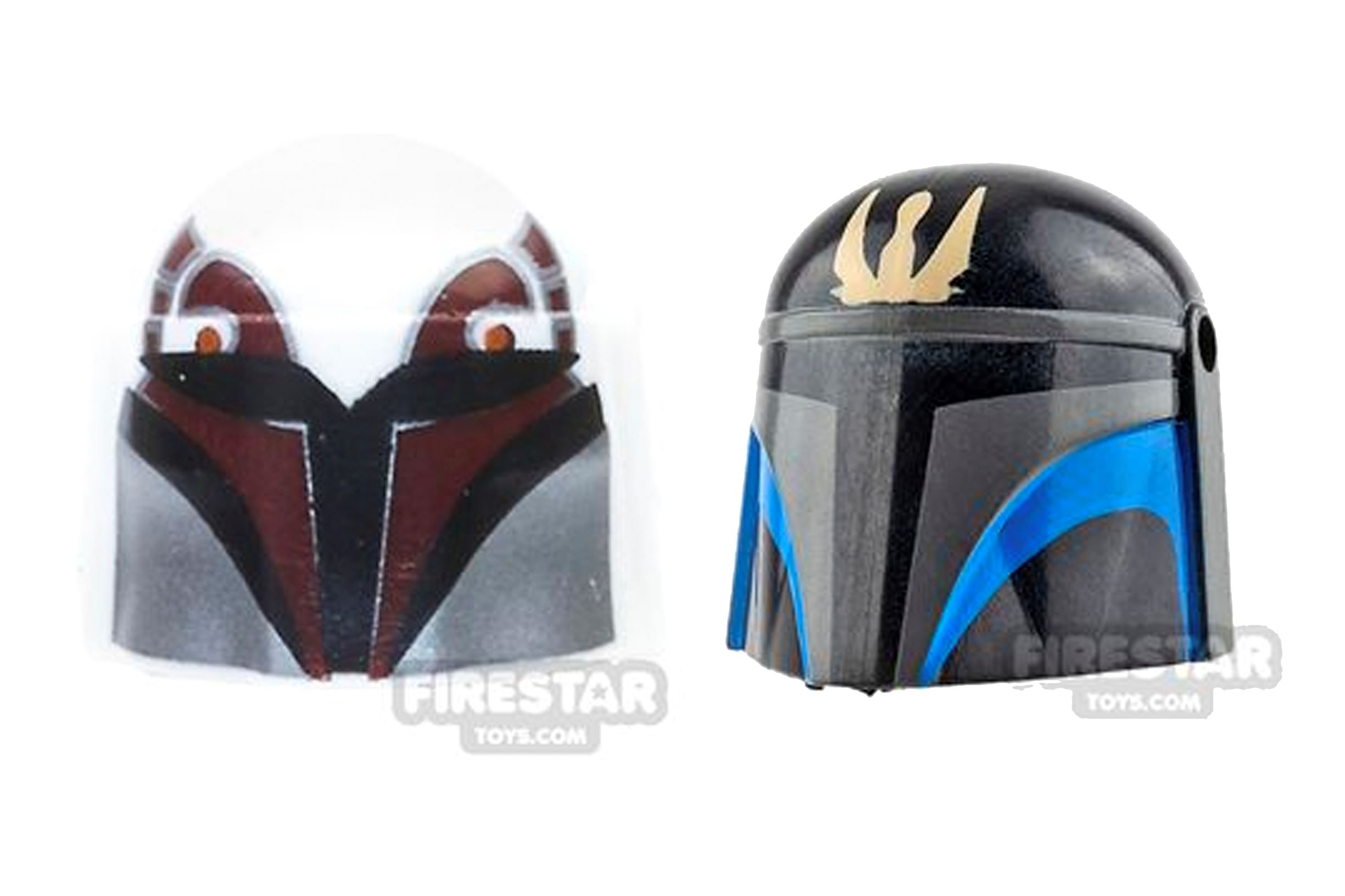 They always say it’s important to wear the right headgear for the work which you’re undertaking. It’s why builders and people in the construction people wear hard hats, and why soldiers wear Kevlar – so why should your LEGO Mandalorian be any different? The right helmet can provide them with protection from blaster shots – in addition to better tactical awareness of the battlefield. Plus, it can help them to stand out from the other Mandalorians in your collection.

When it comes to Mandalorian Headgear, one of my favourite providers of awesome-looking helmets must be the incredible Clone Army Customs. They provide an assortment of incredibly creative Mandalorian helmets. They have ones based on characters like from the Clone Wars – like the awesome Pre Vee Helmet, but they also have more unique designs – like their Super Mando assortment. It’s safe to say that these are some of the coolest Mandalorian helmets on the market – but they aren’t the only ones!

Arealight also provide an assortment of great accessories to go together with their other Mandalorian themed pieces. One of my personal favourites is the ‘Rebel Hunter’ helmet – which provides a fantastic design for a White Mandalorian armour set. They are another company who offer some fantastic elements – so make sure to check them out if you are not already familiar with their work!

Why Use Your Legs to Get from A To B? Jetpacks exist for a reason! 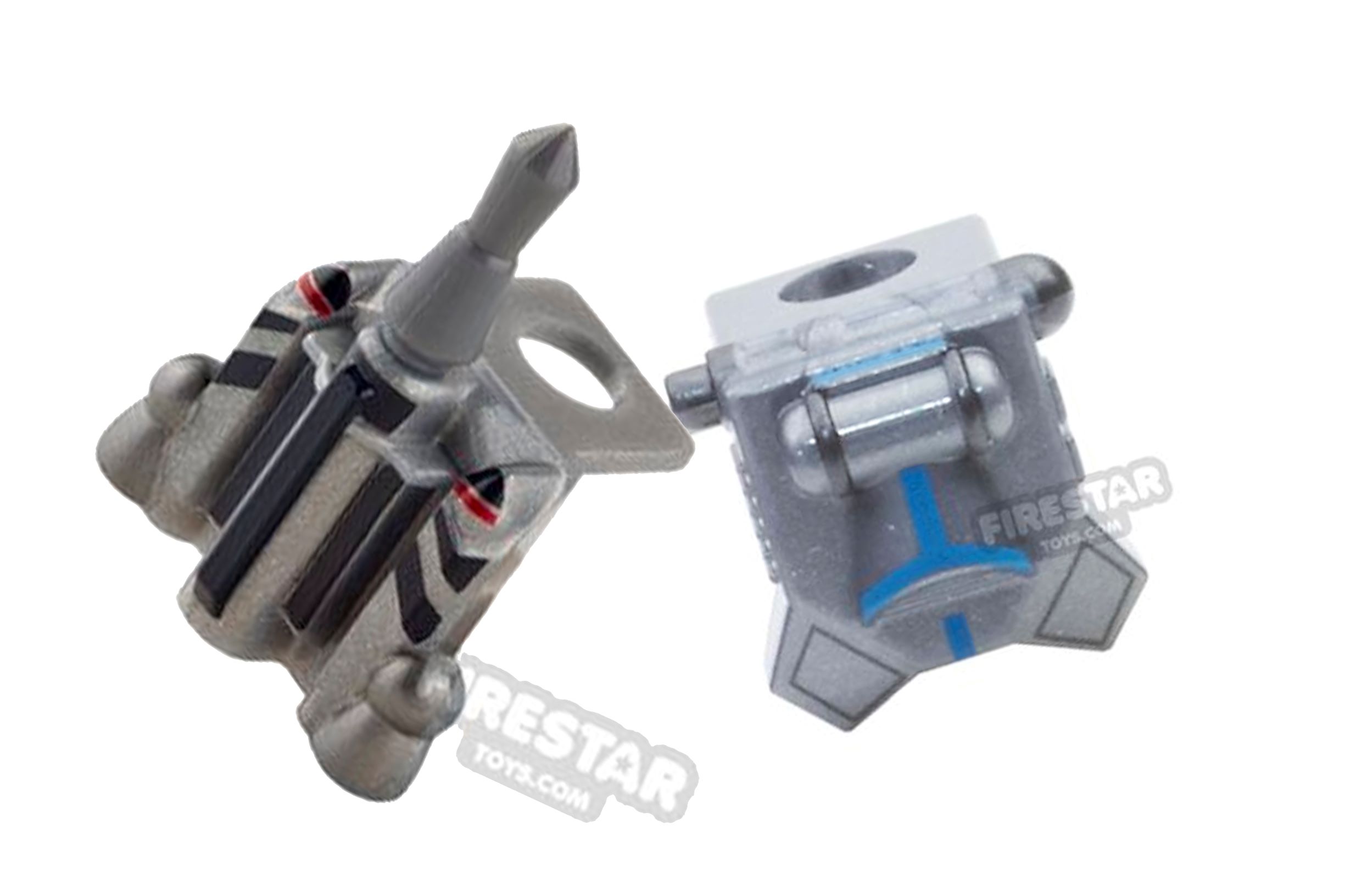 It’s safe to say that when we talk about Mandalorians, we scarcely ever see them without Jetpacks – using them to jet from point A to point B with comfort and ease. Whilst LEGO have produced their own fantastic jetpacks in the past, you may want a different style to make some of your minifigures stand out, and that is where Arealight’s diverse collection of Bodywear comes to the forefront once again. Arealight over a variety of jet packs in different colours and with different styles and prints – meaning you can get some unique accessories which really stand out. Jet packs like the Pre Jet Pack in Silver look especially fantastic on a minifigure – with the unique style for the rocket sticking out the back really popping off of a minifigure’s back. Of course, if your minifigures need something a little bit more compact, then something like the VIZ Jet Pack in Blue may be more their style – allowing them to tuck their jetpack close to their back for maximum aerodynamics.

Whichever style you prefer, it is safe to say that there are some incredibly fun options for great jetpacks which your LEGO Mandalorians can don as they charge (or jet!) into battle.

A Speeder Bike for A Speedy Getaway 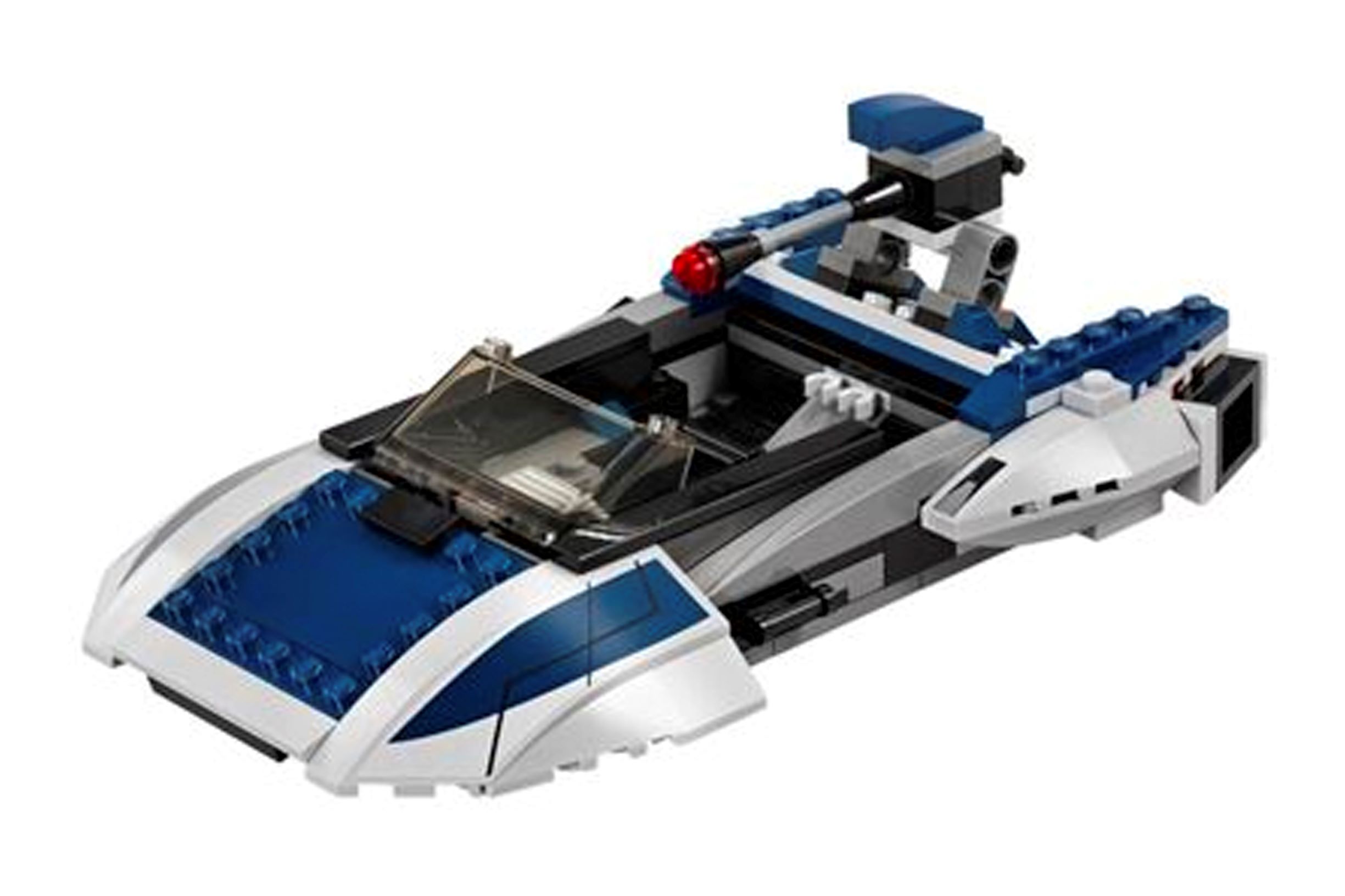 Lastly for today’s article – every good bounty hunter needs a reliable speeder bike which they can use to hunt down their quarrels in style. Firestar Toys carry an assortment of ‘Star Wars Mini Sets’ – many of which are individual speeders which can be put to great use with your minifigures! I’ve currently got my eyes on a few of my favourites which I want to pick up in the coming weeks. One of my favourites is the Bounty Hunter Speeder. Fast, nimble and packed with weapons which could get any Mandalorian out of a tight squeeze, this looks like an incredible speeder. Another sleek design I adore is the Mandalorian Speeder itself. This feels like the convertible of the LEGO speeder world, with a sleek, laid-back design which looks incredibly fast. Plus, it’s based on a fantastic design from The Clone Wars – so this is one which I really want to pick up!

So, if you’re feeling the Mandalorian fever like many of us are at the moment, then it is safe to say that there is an assortment of fantastic items out there to help you scratch that itch and get your Mandalorian LEGO fix. I hope you enjoyed some of my picks. I’d love to hear your favourites in the comments below!

May the Force Be With You: A Look at the New 2020 LEGO Star Wars Sets