During my time as a connoisseur of LEGO, I’ve come across some strange themes, but none more so than the tale of the following… Honestly, this one would have passed me by if it wasn’t for the irritating catchy theme tune at the start of each cartoon and my daughter jumping up and down every time she heard it. That day curiosity got the better off me and I sat down and actually watched an episode and surprisingly, I got to see what this was all about.

It started off with the following; “Who Lives in A Pineapple Under the Sea….”, and that is as much as you’re getting, as that song stuck in my head for weeks. You can see why cartoons use these, they are there to torture us!

The answer to the question?

Why it was Spongebob Squarepants of course! This crazy theme ran from 2006 to 2012 after which it was discontinued. To explain this to us mere mortals, you need to throw reality out the window. Spongebob is of course a sponge living in a pineapple under the sea in a place called Bikini Bottom with his best friend Patrick Starfish. 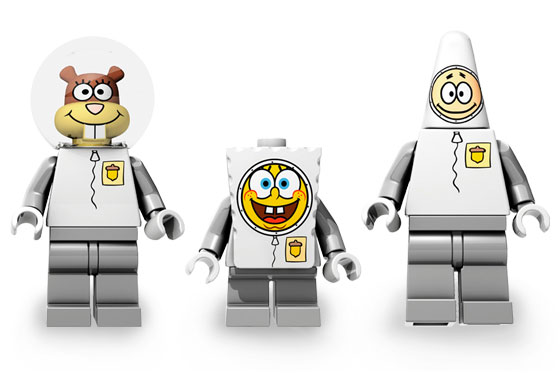 Before you say it, yes, there is something fishy going on here.

The story revolves around the antics of them living in a town called Bikini Bottom and working at the Krusty Crab (a diner), selling ‘Krabby Patties’ (Hamburgers) working for a crab, a skint-flint of a boss called Mr. Krabs. Along with other colourful characters, such as Squidward, his long suffering neighbour and co-worker, and Sandy Cheeks, an experimental hamster, which is living in a glass dome at the bottom of the sea?

Confused? You ought to be, I know I was when I first started watching this.

Some other obscure characters include Gary, Spongebob’s pet snail that meows like a cat, and the villain of the piece, Plankton, who is always coming up with ways to steal the formula for the Krabby Patty from Mr. Krabs, not successfully I might add.

Although there are other characters throughout the series, I’ll just deal with the main ones for the moment.

Now LEGO wasn’t the first to catch on to this series when it first came out. In fact, Megabloks and Fischer Price had already got the license to turn this cartoon into sets and was doing quite well.

So, it was no surprise that when the license came up for grabs, LEGO was on a sure thing, and so it was that in 2006 LEGO Spongebob was released. 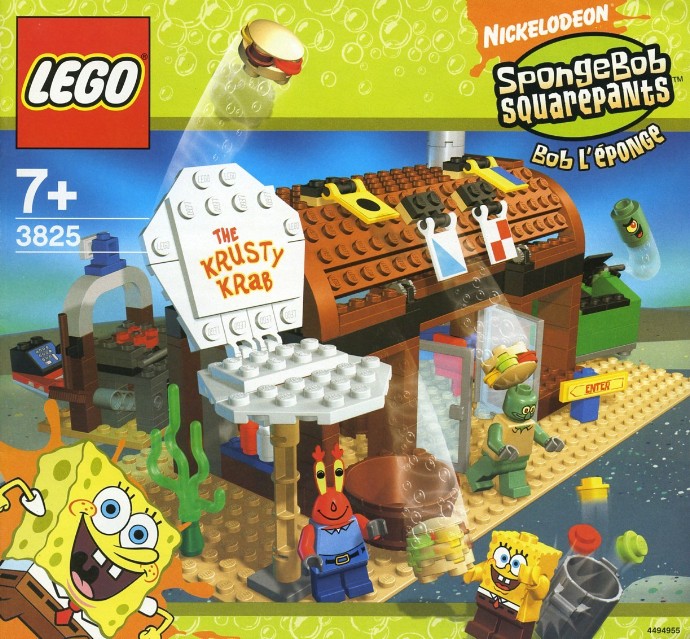 The first set that LEGO came up with had to be the Krusty Krab diner set number 3825. I think it retailed for about $40 AUD and at the time not many knew of its existence. A few weeks after it hit the shelves and word had finally got around, just like that, it was gone.

I remember the excitement on my daughter’s face when she saw this. It was, by far, the best set I’d ever got for her. Of course, as we know, this was one of many. 14 to be exact, and true to their word more followed, but for now this would have to do.

The set consisted of a diner, and just like the cartoon one, had all of the features. It also came with 5 of the main characters. Bob, Patrick, Squidward, Mr. Krabs and of course, Plankton! There was also a way of flipping the burgers and it came with the secret recipe (a sticker on a tile).  Okay so the first set was a work in progress, but it did lay the ground work for things to get better. 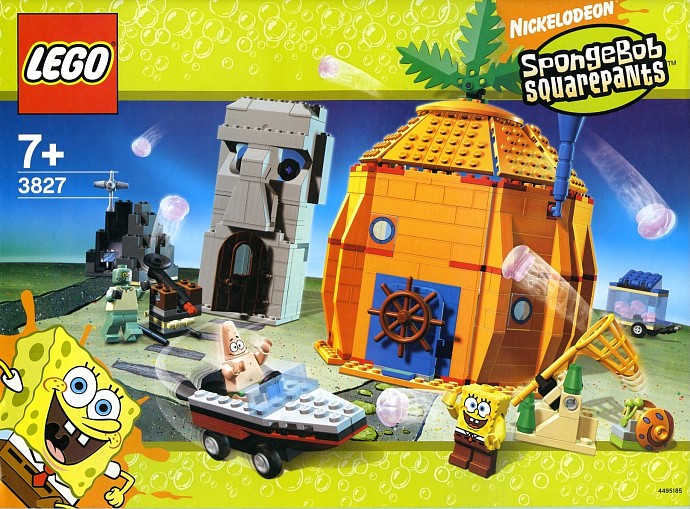 Set number 3827 also brought us the set ‘Adventures in Bikini Bottom’ which finally gave us the rest of Bikini Bottom. Bob, Patrick and Squidward now had a place to call home. It also came with Gary, a figure which, although only made up from parts, delighted many.

The only one missing was Sandy Cheeks, but it would be a year or two before we’d see this minifigure arrive. In the meantime, the largest of the sets, 3826 Build-a-Bob arrived on the scene. This set, although consisting of a large brick-built Bob, could do some crazy things. His eyes could roll and his mouth could change. And if you built him right, you could shoot jellyfish from his mouth. What more could you want? 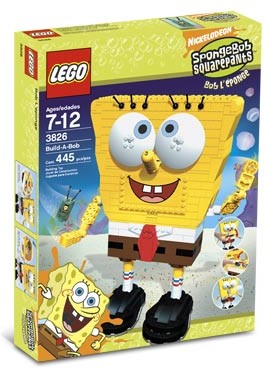 A larger Plankton you say? That, too, was thought of, as the story behind this was Plankton had taken over Bob’s brain. And you thought cartoons didn’t have a good message?

Speaking of Plankton… He wasn’t forgotten. Apart from the Build-a-Bob set, in 2007 we also got the 4981 Chum Bucket, Mr. Krabs’ arch enemy’s restaurant and laboratory, which also included Bob, Bob the robot, burger walker and a robot customer. These he would use to steal the secret formula for the Krabby Patty. It was an interesting set to build as it basically looked like a bucket? 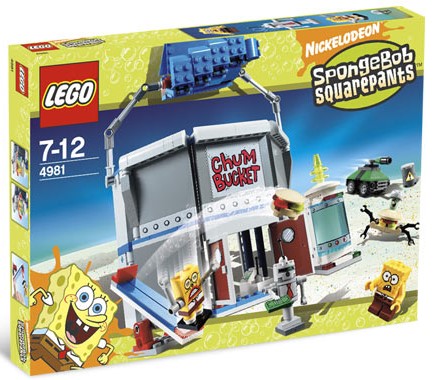 Also, that year LEGO treated the fans to yet another character from the series with the release of Mrs. Puff in set no. 4982, Mrs. Puff’s Boating School. If you ever needed a lesson in driving a boat, then this was the set to get. Along with its driving course, it came with 2 boats with pull-back motors. These could fly around the track and see if you pass the test (we didn’t!). It also came with the driving school and light house. It was a bit of a disappointment as there wasn’t much in it to play with, and although great to look at, that was about it. I will say though that the minifigure of Mrs. Puff was a big hit. 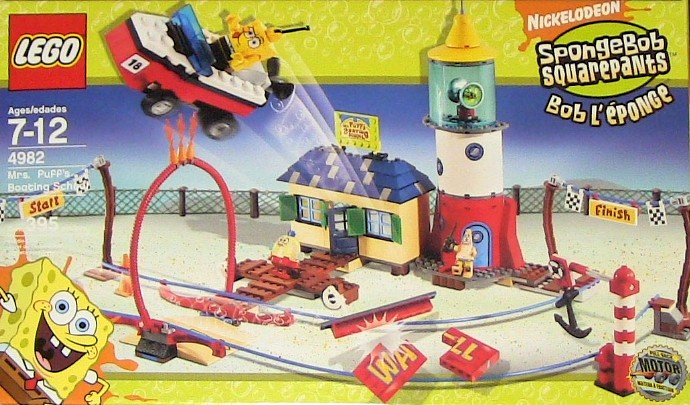 It would be 2008 before we’d see any more from LEGO Spongebob. While it was a welcome relief to many when they did arrive, they were in short supply, and again, many missed out on these.

First, you had the 3830, The Bikini Bottom Express, which consisted of a Bus shaped like a Submarine and a cranky fish bus conductor. The best bit was the ticket dispenser as it reminded me of the older Pez dispensers, only this one spat out bus tickets. Well thought out that. 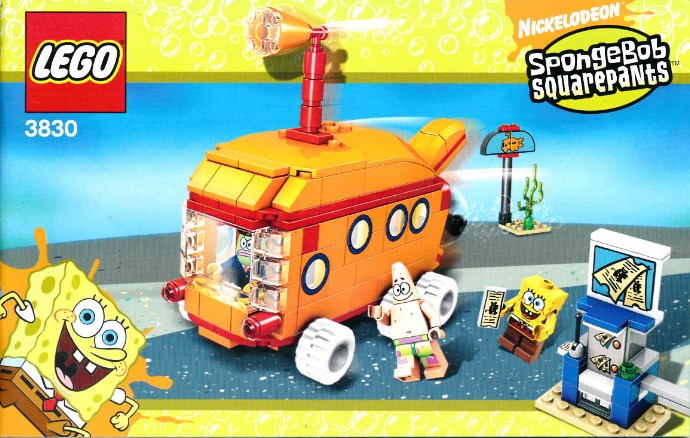 Then you got my favourite (yes, by then, I was a fan!) in the shape of 3831 Rocket Ride, and finally you got Sandy Cheeks. The set was basically a rocket that could open up to reveal rooms. The 3 figures all had spacesuits, along with a moon buggy and the launch ramp. The Sandy figure was really well done, and to top her off they gave her the fish bowl helmet, which looked the part. You even got some jellyfish and a net to catch them. A great set, the only let down as far as I could see was the stickers again. There were lots! 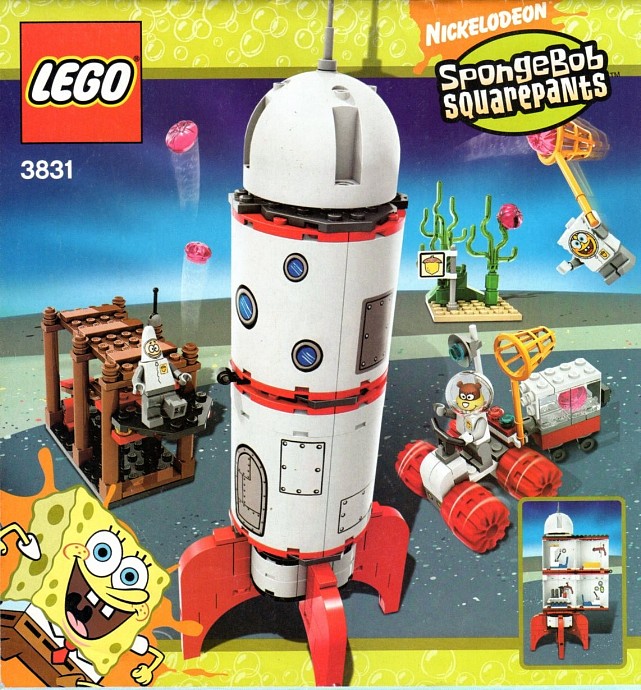 Next up was the 3832, The Emergency Room. I have to confess here, I didn’t get this one in Australia, as I couldn’t find it in the shops. It turned out it was pretty rare and although it had some interesting pieces (Doctor Fish included) it was an acquired taste. 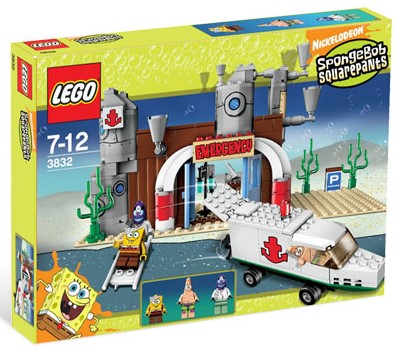 2009 brought the joy back, as those who missed out on the first set, soon got another chance to re-live the magic with the release of 3833, Krusty Crab Adventures. LEGO Spongebob was back with a vengeance, and this time there was an all-new Paddy Wagon. My only gripe about this was the diner was very sparse in that it didn’t come with any guests or Squidward flipping paddies. 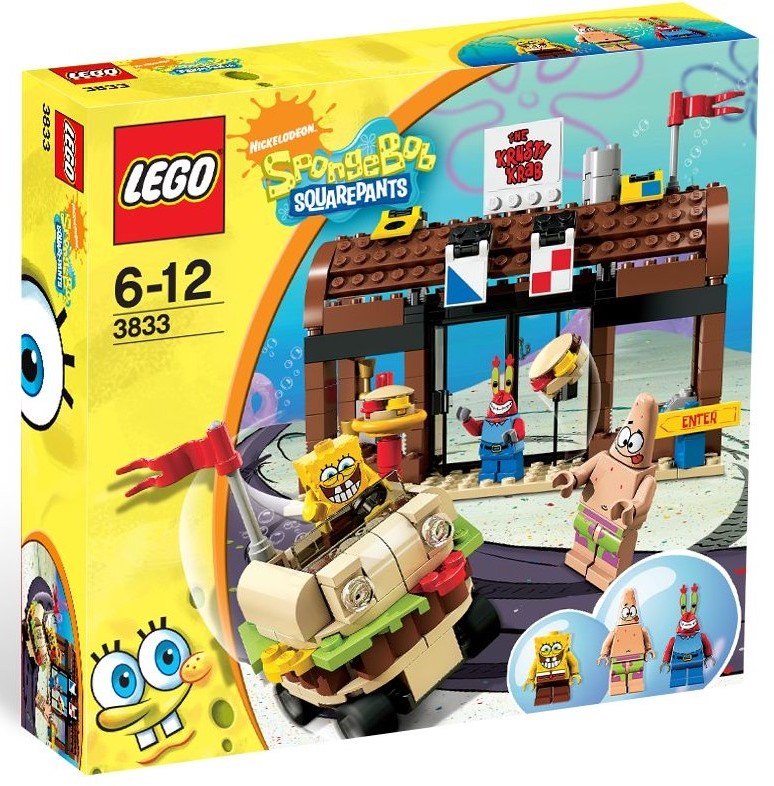 Sure enough, the set 3834, Good Neighbours at Bikini Bottom delivered an all-new Squidward. It was complete with a moulded head along with a newly designed pineapple and some added features for flipping burgers as well as a new mode of transport for Patrick. 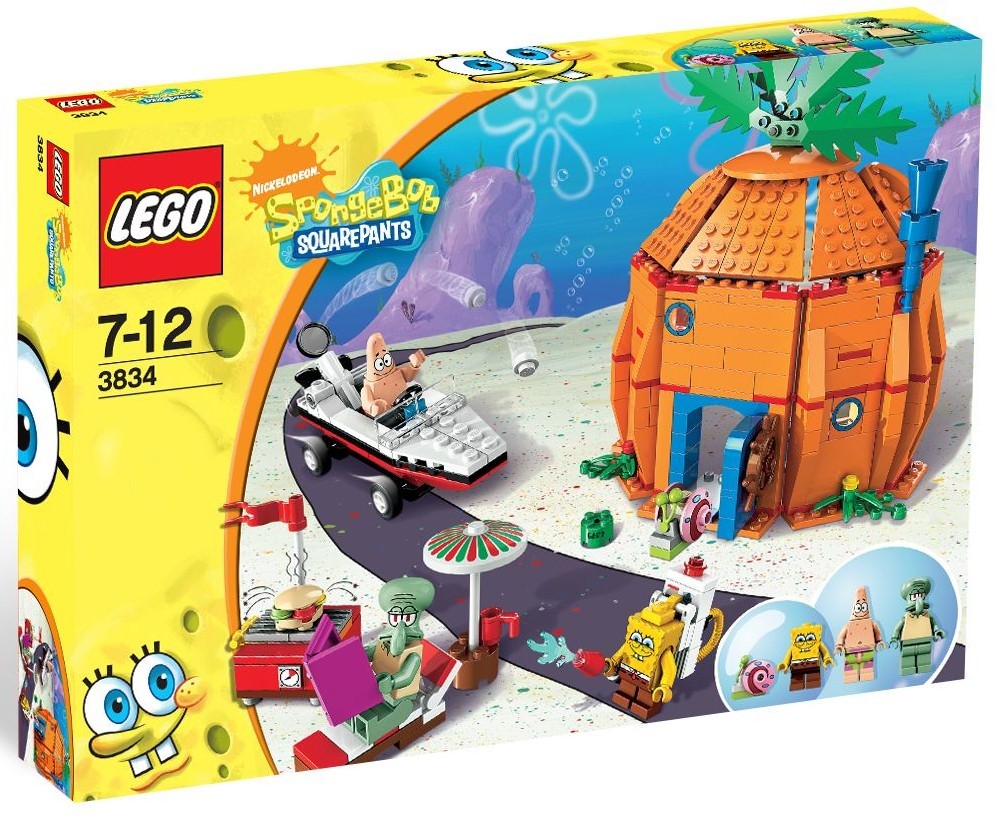 By now, though, things had started turning stale in the LEGO Spongebob world. We really hadn’t seen anything new and certainly no new characters had arrived to speak of. So, LEGO took a break from these to give it a rest.

It wasn’t until 2011 before we started seeing LEGO Spongebob sets again. To kick it off, we had the Heroic Heroes of the Deep, set no. 3815. While I loved the idea of this set, I thought the boat was a bit of a letdown. Don’t get me wrong, I thought the figures were great, and Plankton’s sub suit was good. I just thought it lacked something (I’d seen Batman and I expected more)… 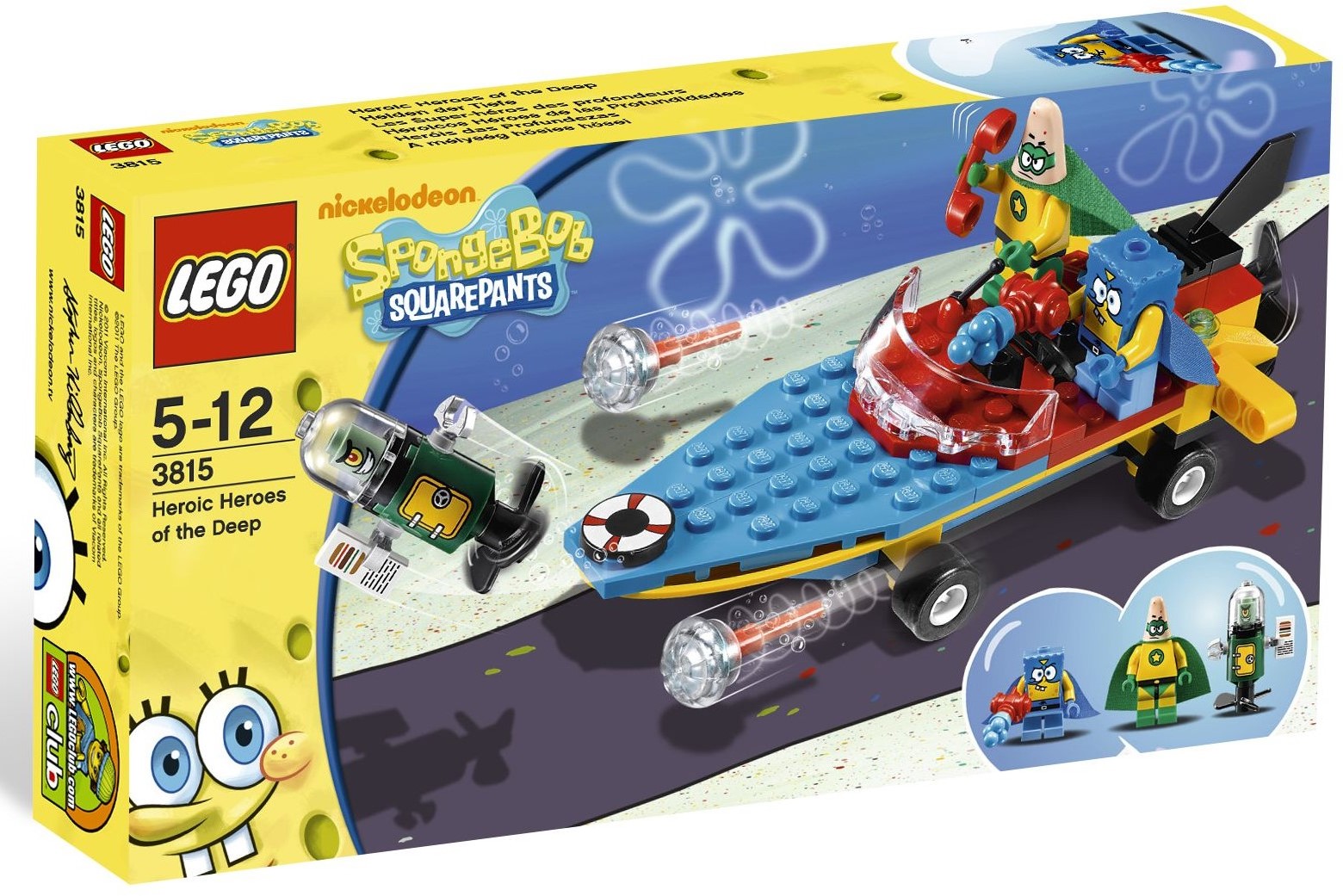 … like the Glove World, set no. 3816 offered. It was a fairground with a Ferris wheel, and for those who missed out on getting the Sandy character, this was a cheaper alternative. It even came with an ice-cream vendor and over indulging Patrick. Heck, even the Ferris wheel had charm. With a ticket booth and a rotating gate, who wouldn’t want this set? 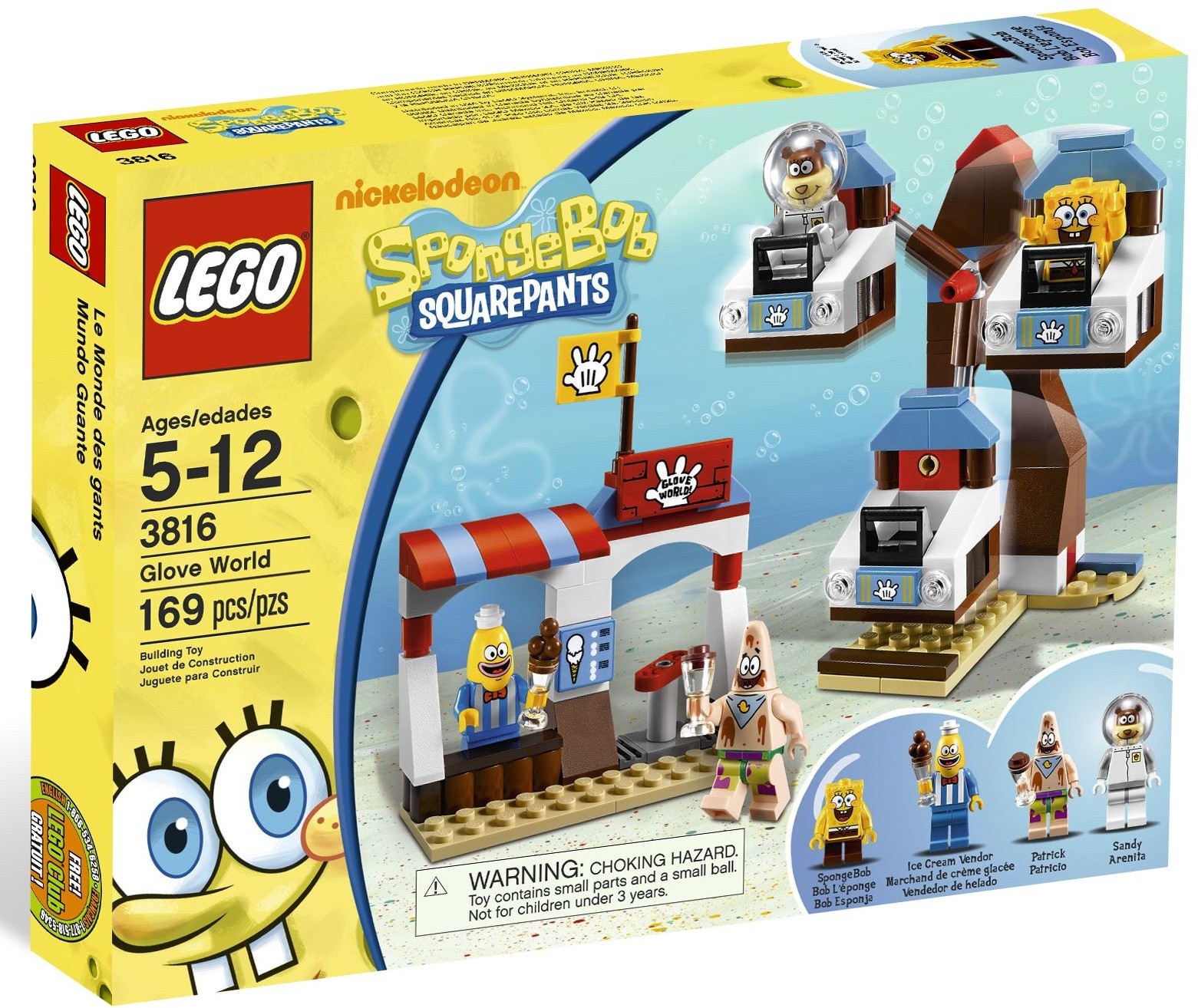 One of the most unusual sets that ever graced this series was that of the 3817, The Flying Dutchman. Before you say it, it has nothing to do with the Pirates of the Caribbean (film series).

This was based on the cartoon episode “Squidward the Unfriendly Ghost”. He also appeared in a few other episodes in that season. It came with the ghostly pirate, his ship and a small island. Once again Bob & Patrick were suitable dressed, only as pirates this time. The accessories included many items including a treasure map, chest, a working cannon and swords, to help ward-off the evil ghost captain. 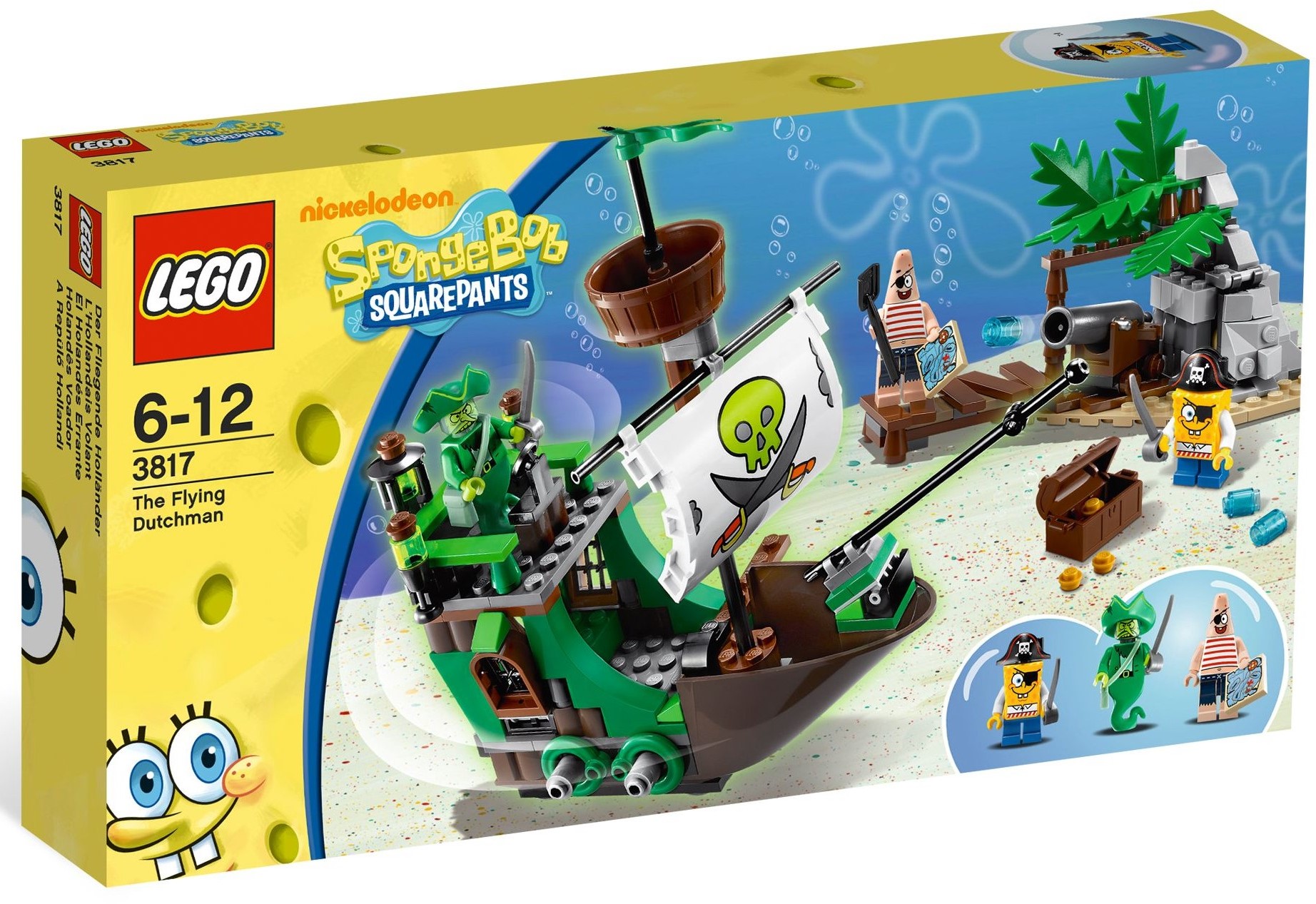 LEGO really went all out on this set, and I liked it very much. It’s a pity it wasn’t a bigger set as by now Spongebob sets was starting to wind down.

The last set in the series was that of 3818, Bikini Bottom Undersea Party. The set included 4 minifigures, Bob, Mrs. Puff, Squidward, Patrick – five, if you include Gary, and was a fitting end to the series. It was released in 2012 and it was considered one of the more popular LEGO Spongebob sets to get. 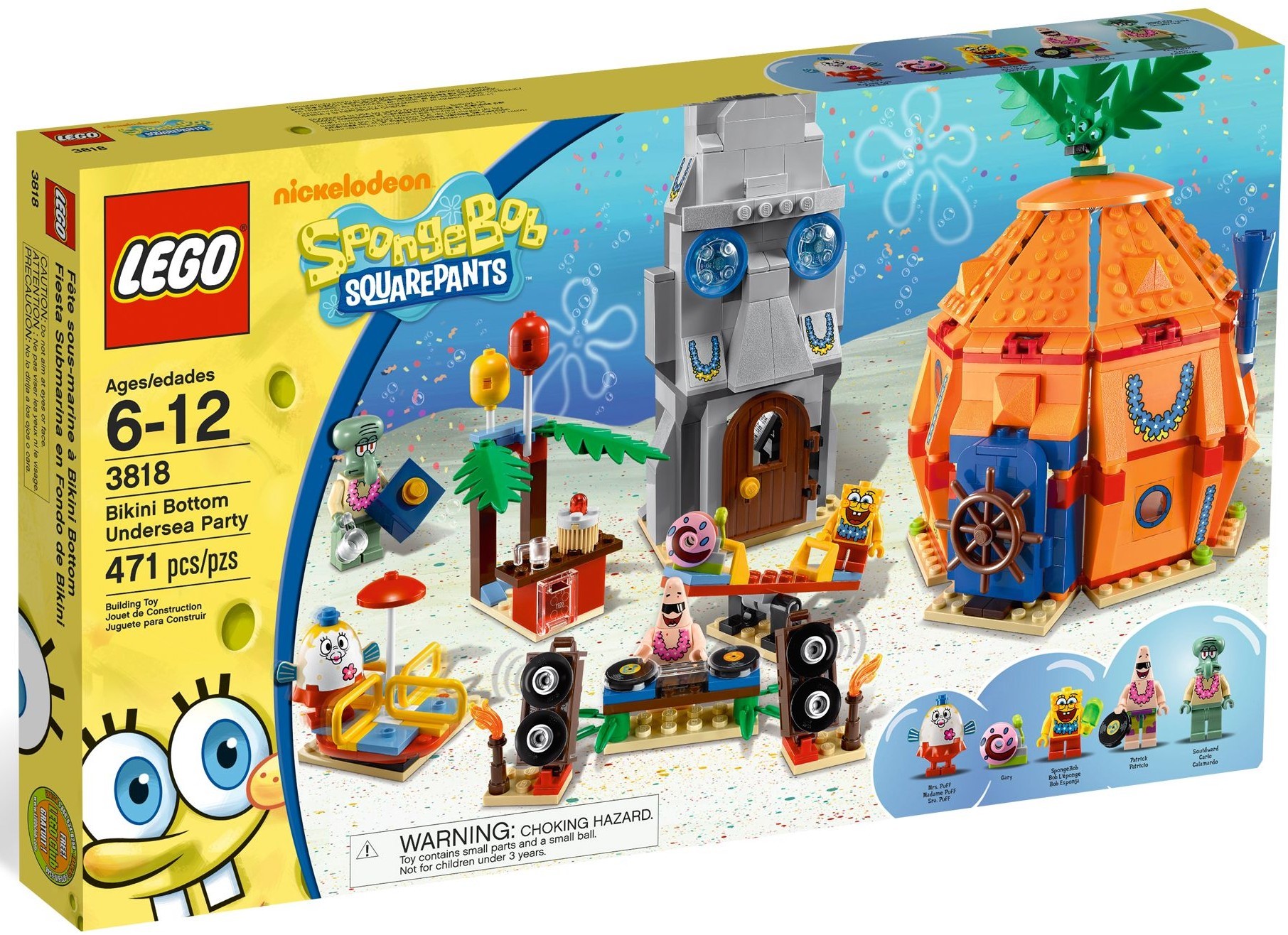 LEGO Spongebob sets were a great way of re-living the cartoon. Basically they were colourful  & entertaining to build, had many fun features and characters to boot.

Like I said previously, there were 14 sets made of this theme in total, and at one stage I had all 14. But you know you have to grow up sometime and it pains me to say, I kept only one.

I think the younger/older generation would love to see a series like this return as it reminds us of a simpler time, before mobile phones! I still see an odd episode here and there, and yes, it still makes me laugh.

As for the figures & sets… well, eBay is always an option and if you are just after the figures, you can find most of them on FireStar Toys. 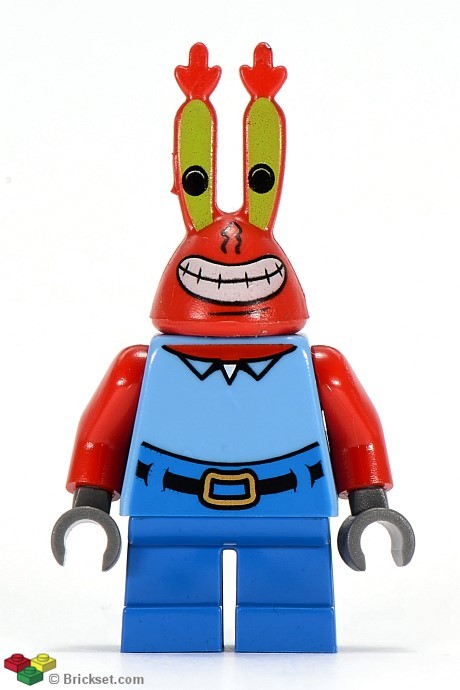