All these lockdowns and curfews and social distancing lead me to re-watching some of my favorite movies. The Lord of the Rings were on top of that list. After about 12 hours of Hobbits and wizards and elves, I started thinking about another favorite pastime of mine: LEGO. I realized I don’t know much about the LEGO The Lord of the Rings sets, and even less about the beautiful MOCs fans make. So, I decided to get back in the writing game and share my thoughts with you.

To be honest, after re-watching the movies, the first thing that came to my mind is how little love The Lord of the Rings got from LEGO. According to Bricklink, there are 15 LotR sets. However, if you take out the polybags, which don’t really add much save the minifigures, we are left with 12. Of these 12, only a handful of them, in my opinion, are enough to start creating your own Middle Earth. Sure, we have Gandalf with his cart, which is nice, and a horrifying Shelob build, but neither give the sense of place. They can only be used as accessories. The Battle of Helm’s Deep (set 9474), or The Tower of Orthanc (set 10237) are much more suitable as starter kits.

But before we get into all that, there’s something else I want to talk about.

LEGO Harry Potter and The Lord of the Rings

The minute after the last film ended, I found myself thinking about the Harry Potter books, and how LEGO continued to make more sets and minifigures on them. I mean, look at the first Harry Potter minifigures for goodness’ sake! Could they BE any more primitive? Still, LEGO kept making more sets, more minifigures, and every minifigure was better than the ones before. Different characters were added each time, and existing ones got more detail. I think it’s safe to say that in a few years, we’ll have every version of Harry, Ron and Hermione from the films – if we don’t already!

So why didn’t they do the same thing for the Lord of the Rings? If it’s a matter of copyright, fine, then there’s not much to say. But I got curious, and I asked Google if LEGO will make more the Lord of the Rings sets. Do you know the first entry I saw? “No.” It was from a Reddit user, and it went on like this: “If LEGO sees a market for new LOTR or Harry Potter sets, they will release new sets.” Since we all know Harry Potter sets are being released almost every year now, they probably see the market for them. But why is the Lord of the Rings different? Does it not have a huge fan base as well? I doubt that.

Of course, when it comes to LEGO, you’re never limited by the sets. There are a number of beautiful the Lord of the Rings MOCs out there.

LEGO The Lord of the Rings Skylines

I thought I’d start with something more general, and relatively smaller in scale. Remember the Skyline series of the LEGO Architecture theme? Well, here are a few Middle Earth Skylines for you.

This first one is by Matteo M. I found him through Flickr, but he also has an Instagram page and sells the instructions of his creations on Rebrickable. His MOCs are definitely worth checking out, with Skylines from the Lord of the Rings to Harry Potter, Avengers to Indiana Jones, and many, many other cool designs. 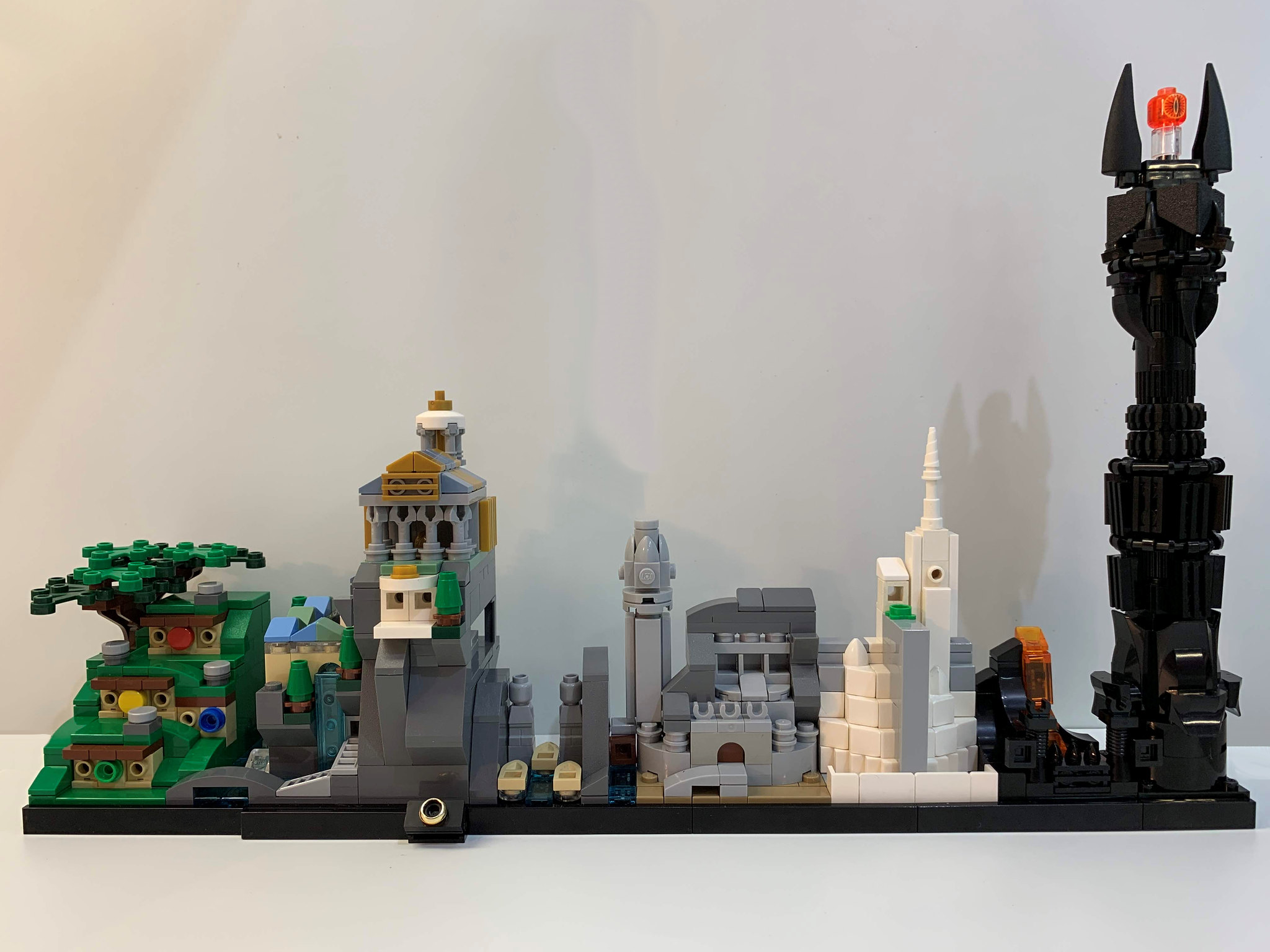 Ben separated the three films and designed a skyline for each. The first one features the Shire, Bree, Weathertop, Ford of Bruinen, Rivendell, Moria (which is behind Rivendell), the Doors of Durin, and the Gates of Argonath. The second one has Edoras, Fangorn Forest, Isengard, the Dead Marshes, and Helm’s Deep. The third consists of Minas Tirith, the Black Gate, Barad-dur, the Tower of Cirith Ungol and Mount Doom. Detailed images can be found both on his social media pages and on Eurobricks.

These, like the Skylines, have the potential to be turned into relatively affordable sets. First, we have the Council of Elrond by Paul Trach. Now, I know that there’s already an official set with the same name, but let’s face it, Paul did a much better job here. 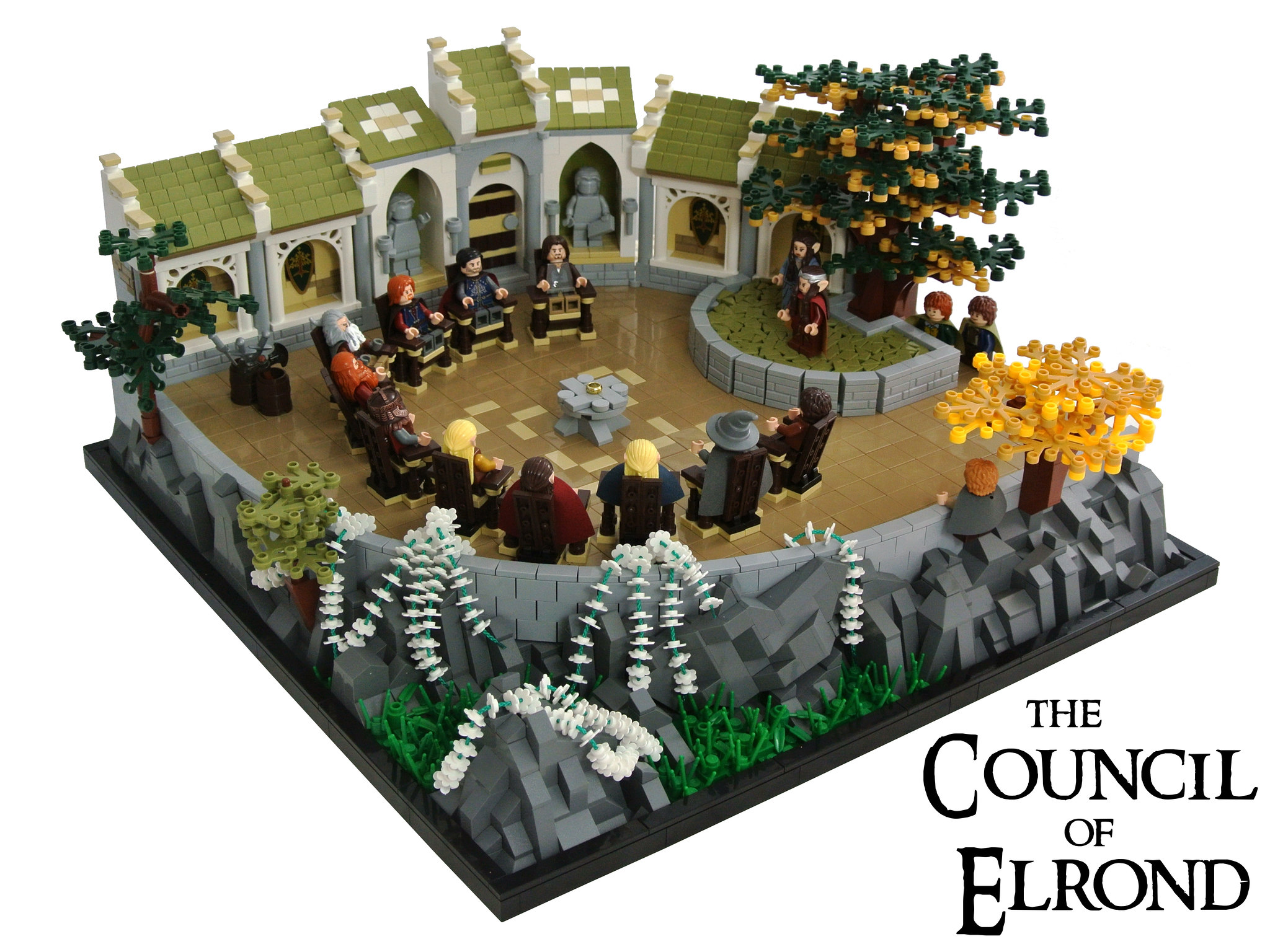 I’ll admit, including all the main characters of the theme in one set may not be so good for marketing and sales, but even if you stick to the figures in the official set (Elrond, Arwen, Frodo and Gimli), the atmosphere he created is so much better than the 242-piece set we got from LEGO. And having Sam, Merry and Pippin hiding is a beautiful little detail. You can find more images of this MOC in Paul’s Flickr page.

Next in line is Leonard von Wolcker with the memorable scene with Arwen, Ringwraiths, and the river. While this isn’t exactly a starting point for a build of Middle Earth, I think it’s a nice detail to have. Think of it as the Expecto Patronum set (75945). A few key figures, a few landscape elements, and (unlike the mentioned set) quite a beautiful build. 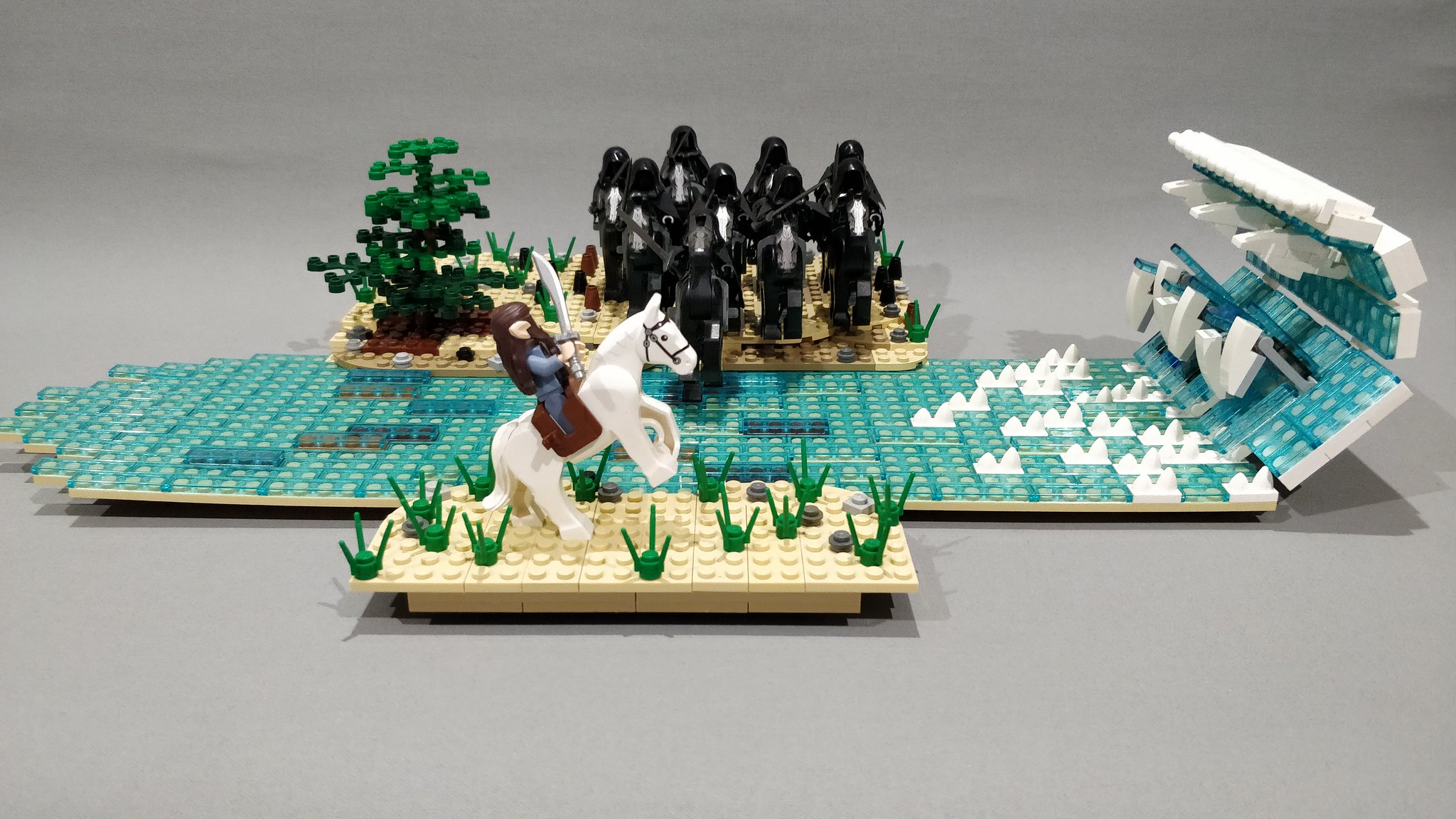 Leonard also has a Weathertop MOC on his Flickr page.

Speaking of scenes including the Ringwraiths… why not have a Nazgul Fellbeast as well? We have been seeing more and more Ninjago dragons lately, so if LEGO ever decides to make more LotR sets, a Fellbeast would be perfect, since they appear throughout the films.

This Fellbeast is made by Adam Purves. It seems it took him a few tries to get it right, but I’d say the end product is magnificent. This would make a great addition to many Middle Earth setups, and a beautiful display piece on its own. 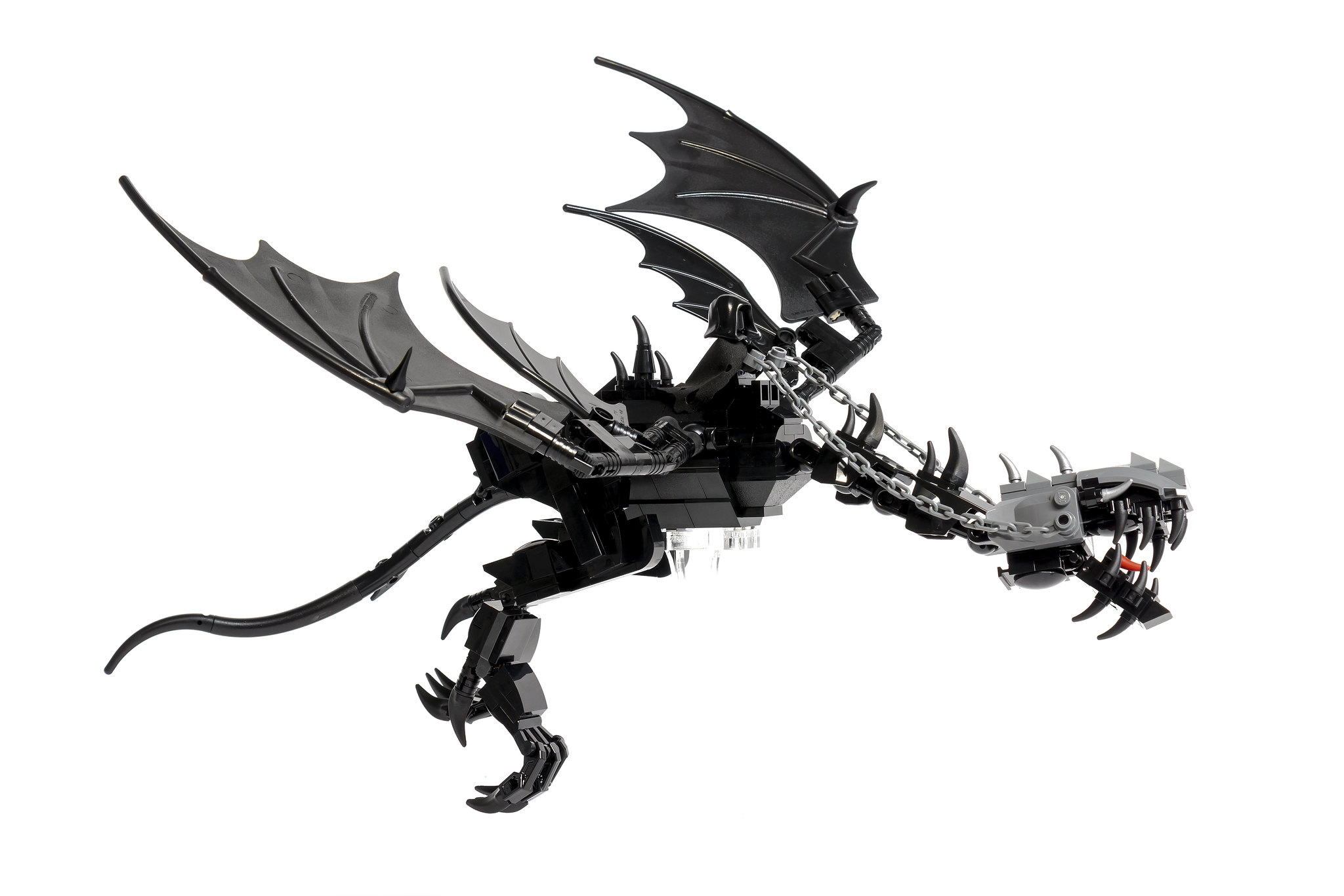 Adam has a Barad-Dur MOC on his Flickr page, where he mentions the design belongs to Anduin1710. You should definitely check out his gallery to see some more awesomeness. Here’s a little (!) sneak peek for you! 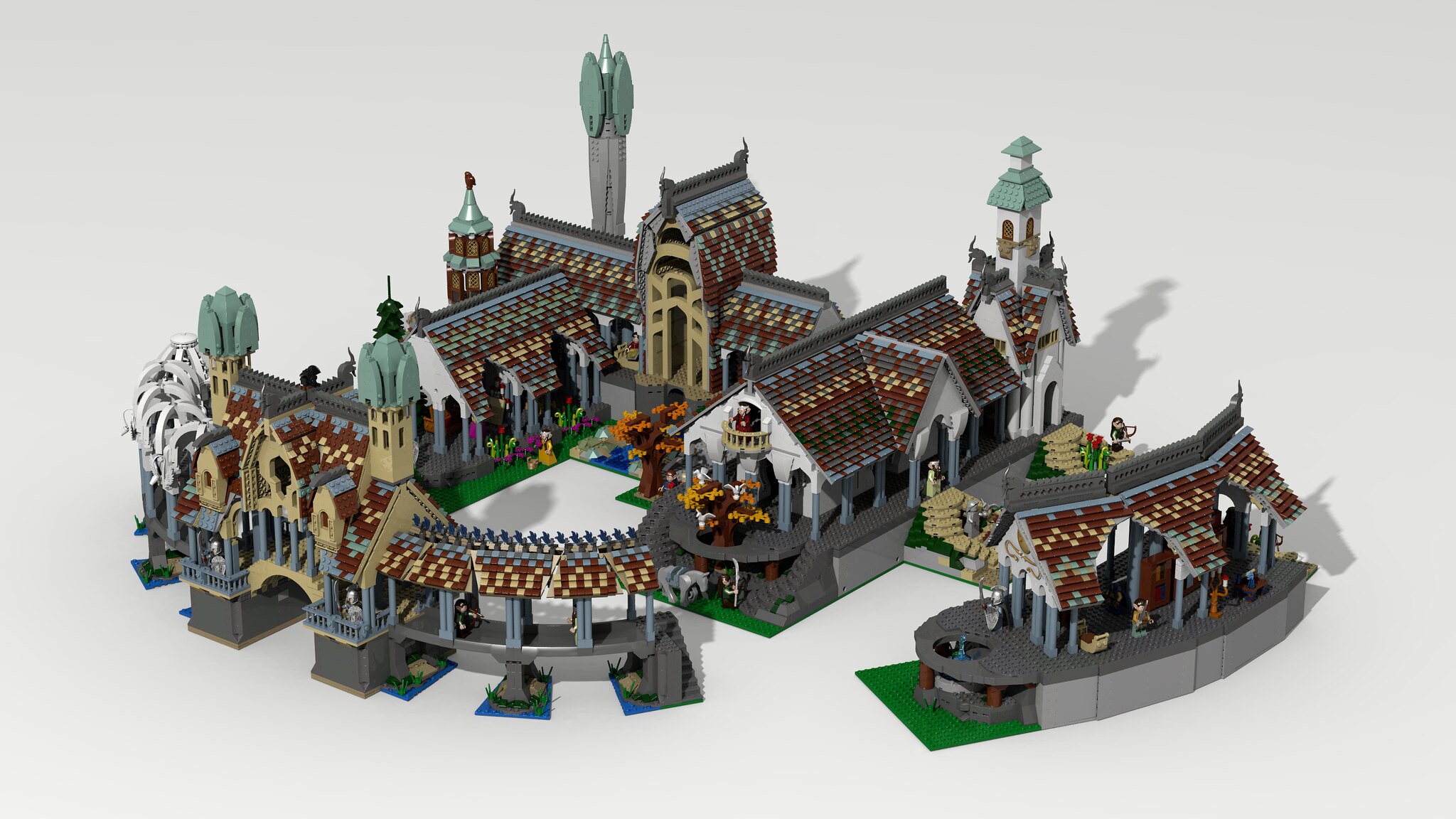 As I was searching for LotR MOCs, and trying to pick some to talk about here, I came across a build called The Black Rider. It was displaying the scene where the Hobbits hide from the Rider, before Merry and Pippin knew anything. I thought “Hey, that’s a nice little build. You can really feel the atmosphere of the scene.” I wondered if the creator has made any other MOCs, so I clicked on his profile…

And that’s when I was left speechless.  Not only he made other MOCs, but they were huge! You could create the whole Middle Earth with them. Well, if you have a spare room big enough, of course, and the cash to get the parts.

According to his Patreon page, Alex (or LegoMocLoc) is an architect. I can only imagine how many hours he spent on creating each and every one of these builds. Here are a few of my favorites, but make sure you visit his Instagram and Rebrickable pages to see more of his wonderful creations.

Some of these are among the smaller builds, mind you! 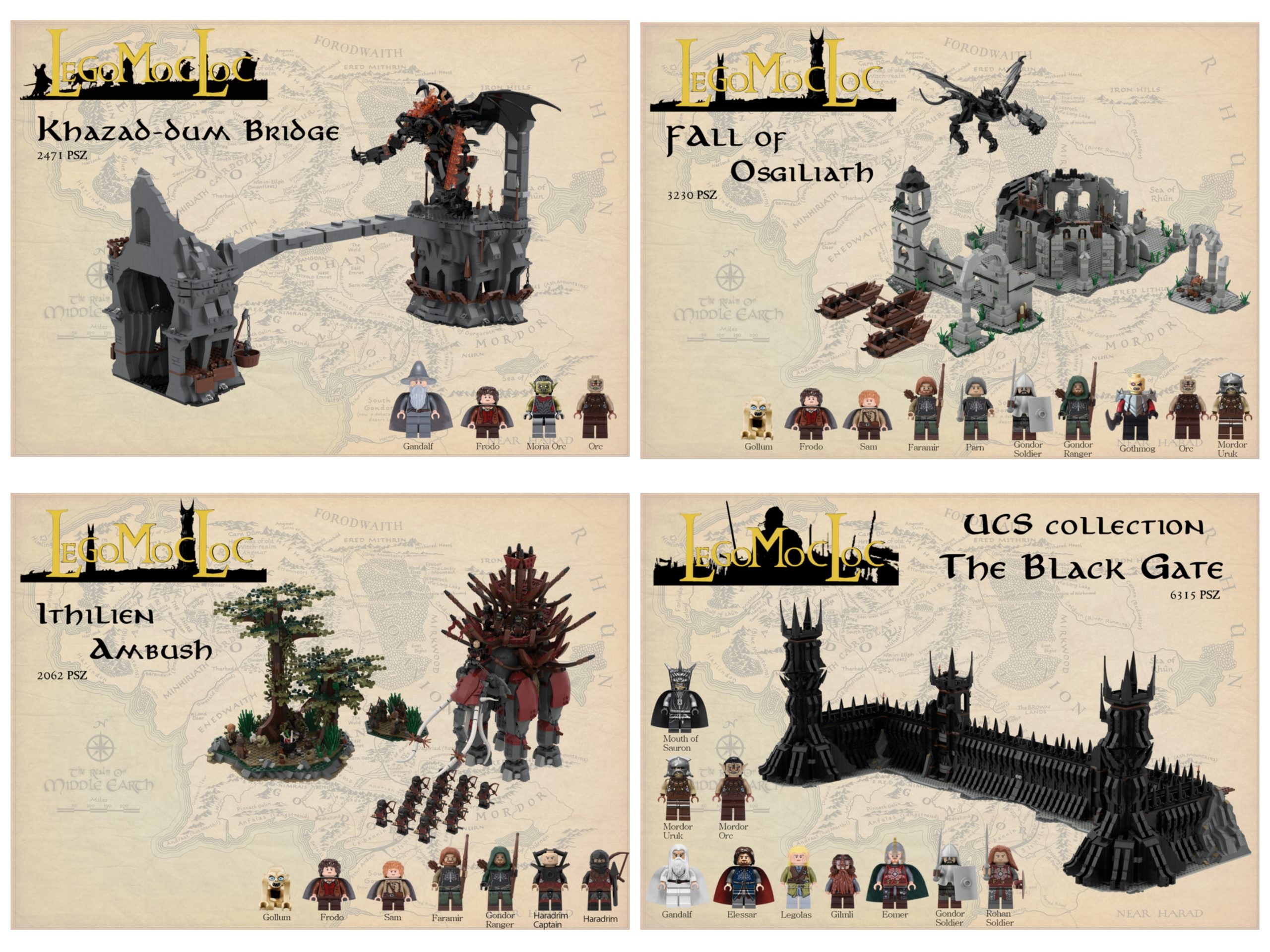 Seriously, if I had any say in it, I would make a LotR department and make this guy the head designer!

While the above creations are digital, the user norlego created some parts of Middle Earth in physical form. Below is the Gate of Edoras. There are many more in his Flickr page, including a huge build of Bree and Buckleberry Ferry, a collaboration between him and Northern LEGO. 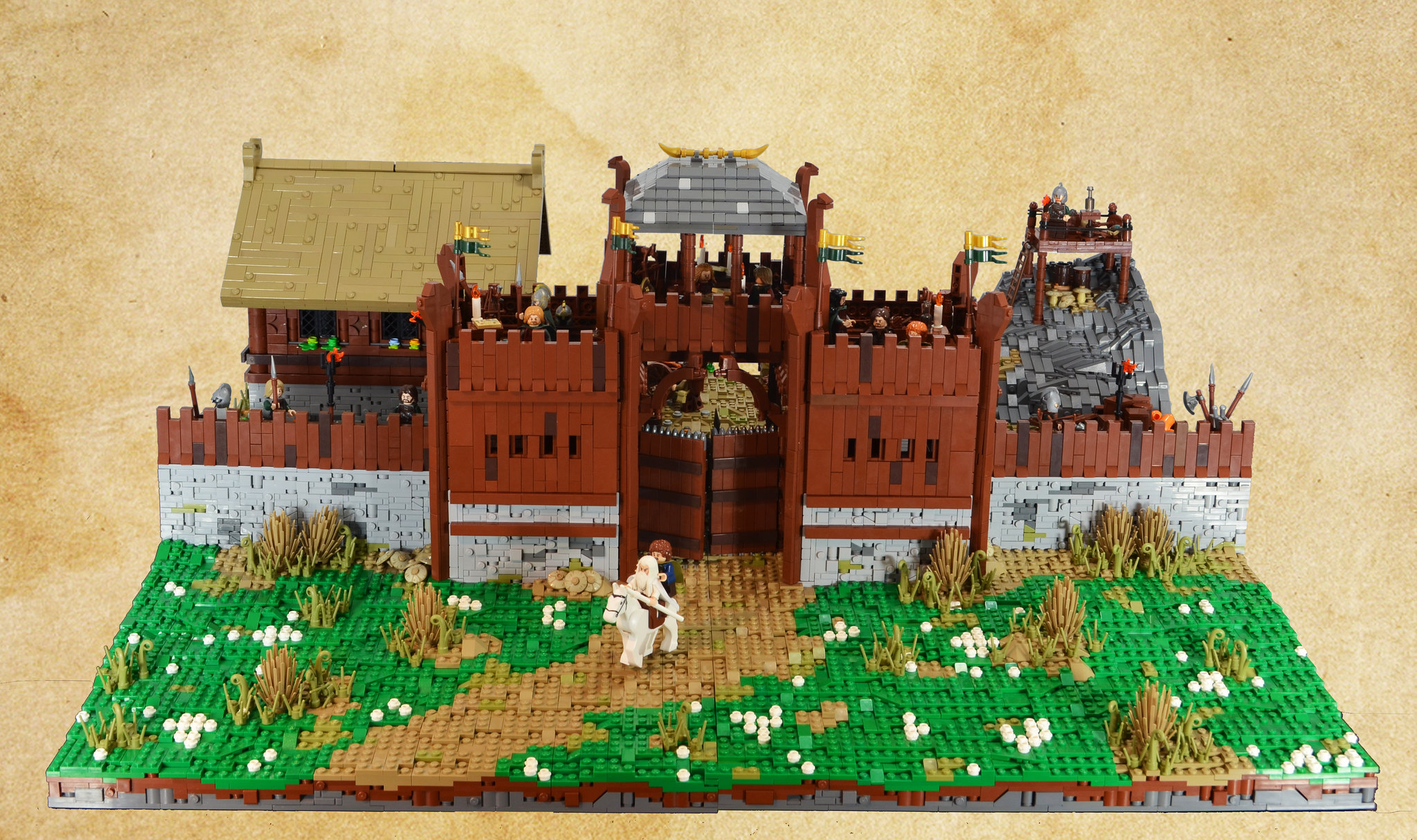 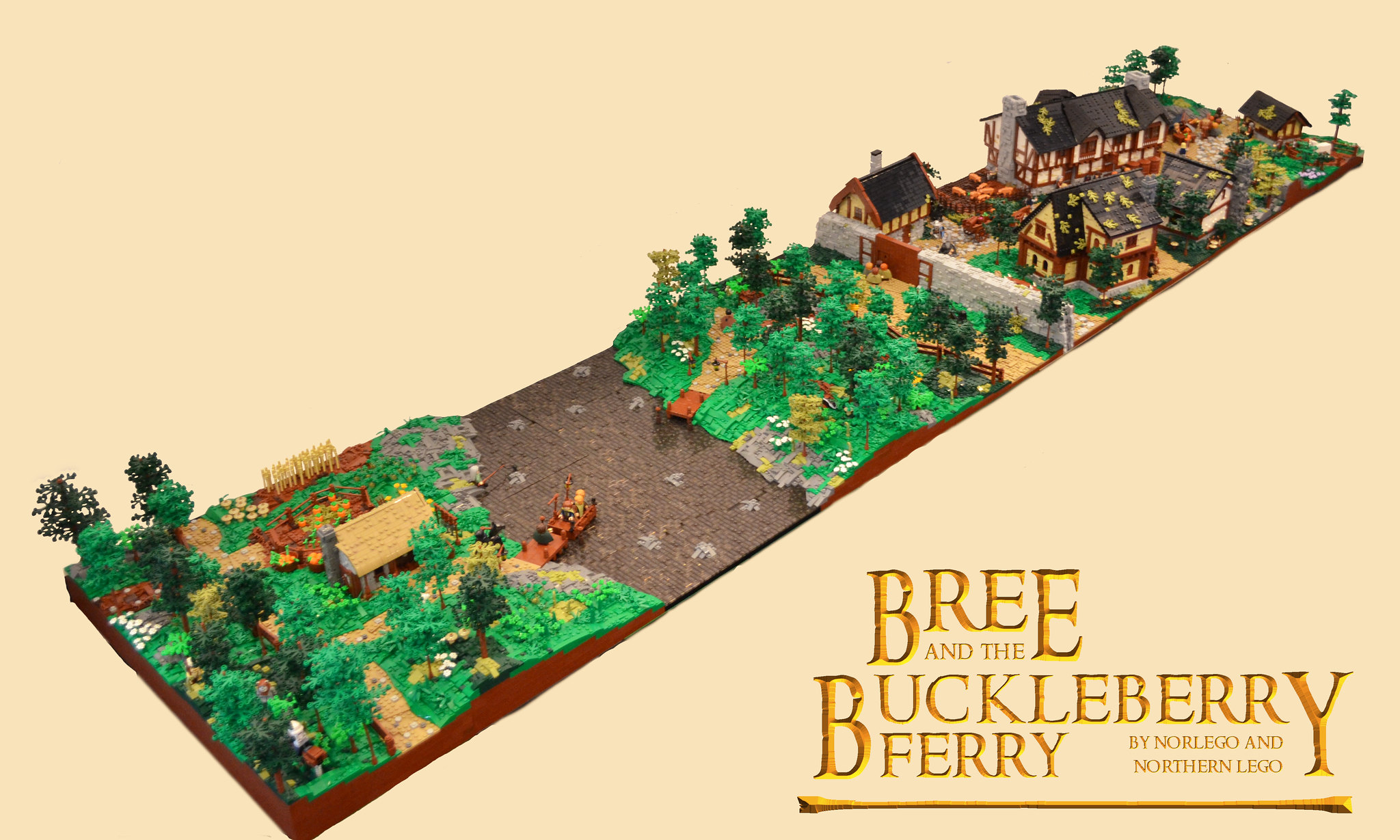 You may have heard of Alice Finch, the super talented lady who built the minifigure-scaled Hogwarts Castle. Well, she also built Rivendell in collaboration with David Frank. Below is the overall image of their build, but please visit her Flickr page for some incredible details. 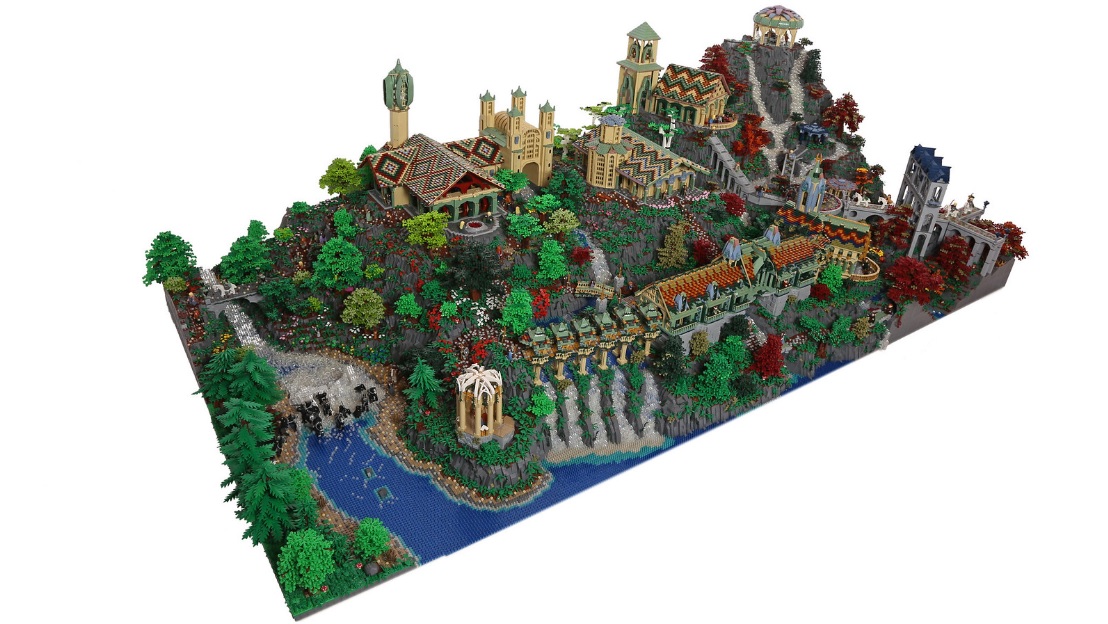 Next, we have Koen Zwanenburg with his beautiful creation of Minas Tirith. Even though the build is in microscale, it consists of 11,500 pieces and took Koen six months to finish. You can find more images on his Flickr page, as well as his Tower of Barad-Dur build. 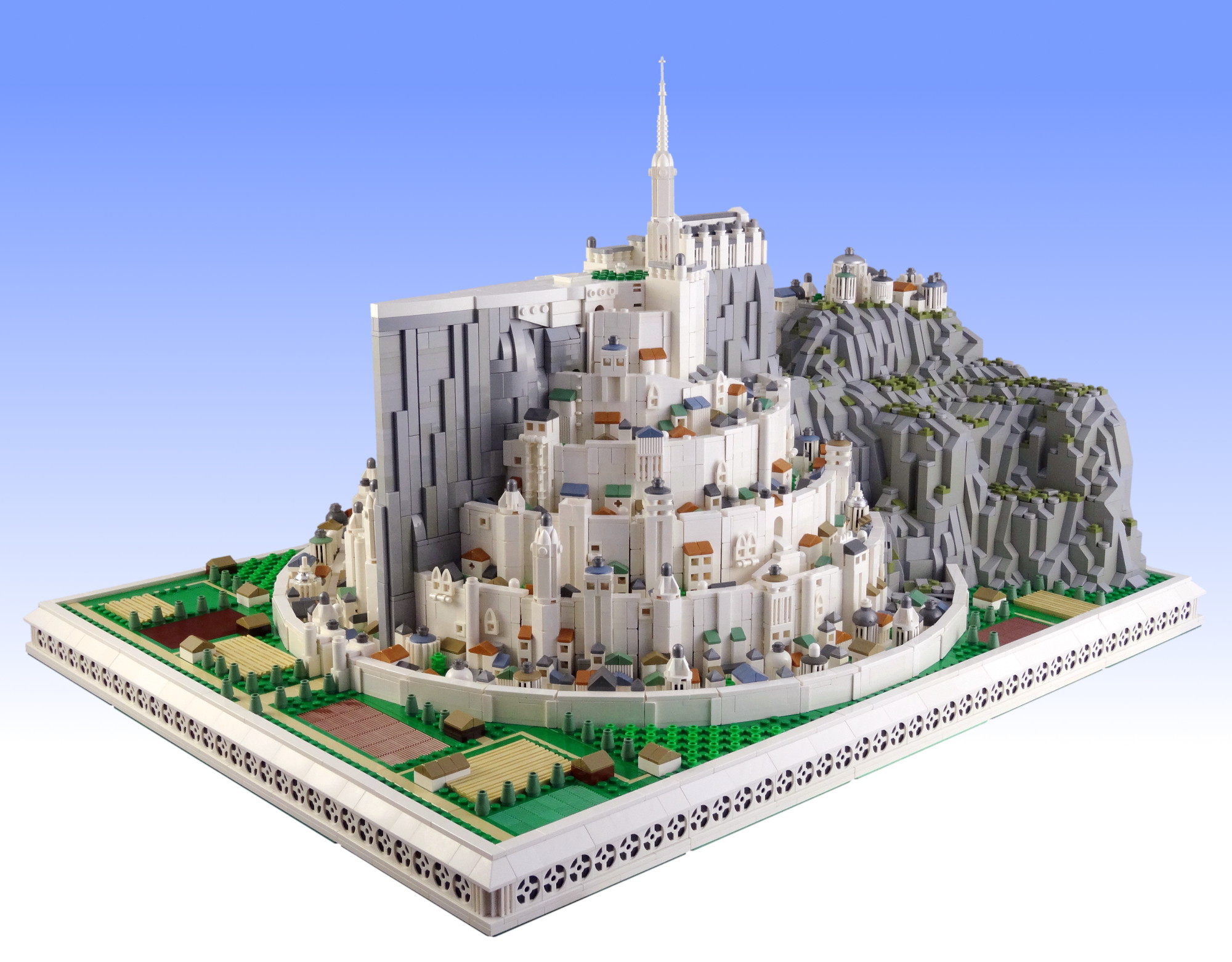 And last, but definitely not the least, where everything started: Hobbiton. This particular build is a collaboration between Jake Hansen and Cole Blood. Make sure you check their Flickr pages to see some detailed images. 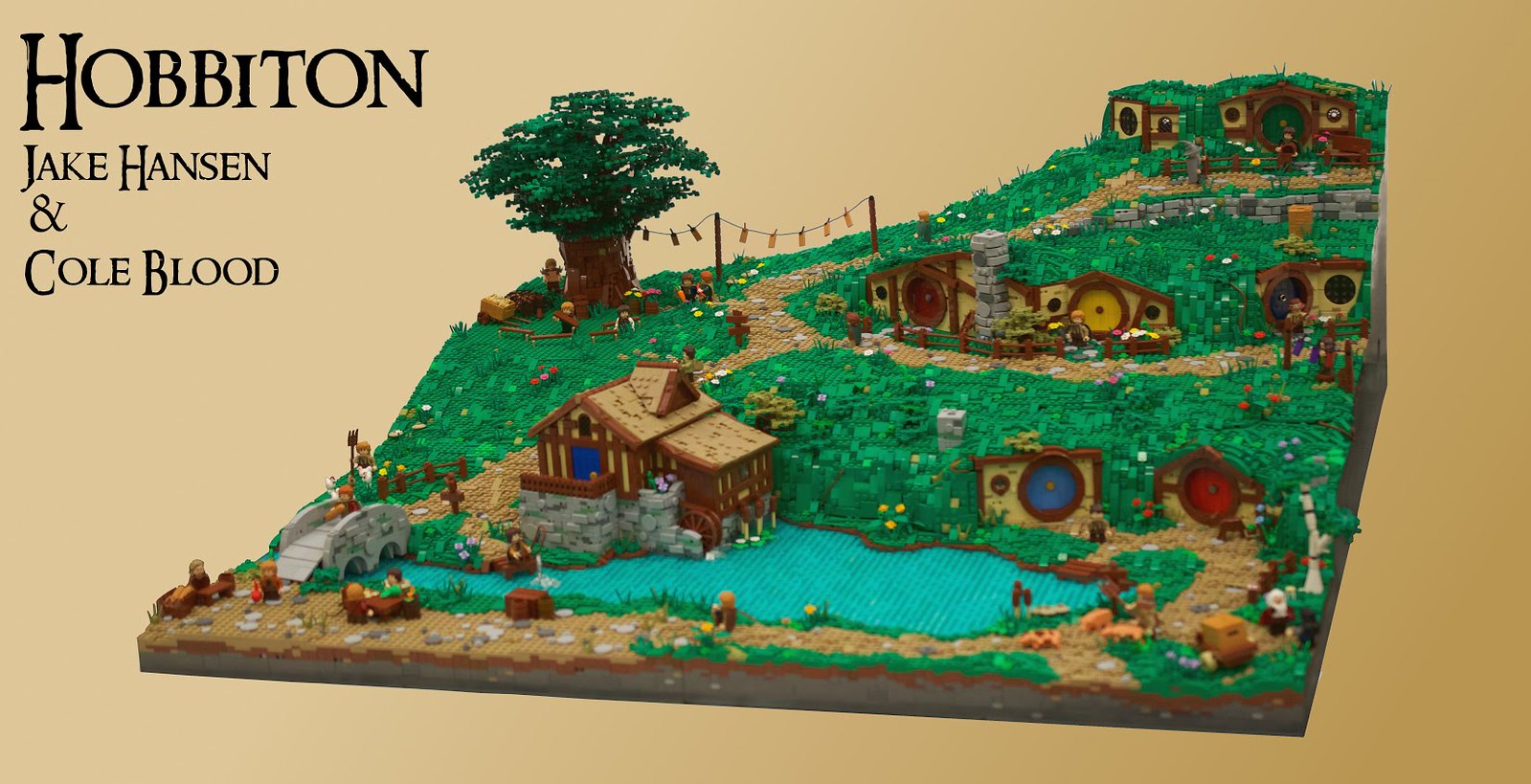 As you can see, there is a lot of potential here, should LEGO ever decide to build more sets. New characters can be added, like Faramir and Eowyn, and existing ones can be re-designed. While they are already pretty detailed, there’s always room for improvement, right?

So, what do you think about this? Should LEGO make more the Lord of the Rings sets? Do you think they would have a market? And what about the existing MOCs spread across the web? Which designs/designers are you favorites? Let me know in the comments!