Welcome to Part II of analyzing the best LEGO Star Wars set by year. Today, we’re kicking off the twentieth century and breaking down the best set from 2000. The year 2000 saw the inception of many things for LEGO Star Wars: Fans and collectors were introduced to LEGO Star Wars Technic models, packs of three minifigures that retailed for only five dollars, and the first ever sets from the still-popular Ultimate Collector Series line, those being the TIE Interceptor and the X-wing Fighter.

In my opinion, LEGO upped their game between 1999 and 2000. A lot of the sets in LEGO Star Wars’ first year were small and simplistic, but after only one year, LEGO was releasing bigger and better models. Some flagship models from that year include the first ever Millennium Falcon and the first Trade Federation MTT, a ship that hasn’t received a revamp since 2014 (whereas it seems the Falcon gets a slightly updated model every year).

But none of the aforementioned building kits are what I think is the best set from 2000. I know there are probably many of you that would say that one of the two UCS sets are the best set from 2000, as they are the most detailed and include the most pieces, but some of my personal bias is going to seep in here as I’ve never really been a big fan of UCS models. Their primary (and pretty much only) purpose is to be displayed. There’s nothing wrong with that and I’ve definitely come to like these bigger, display-oriented models more as I’ve gotten older, but I’ve still got a soft spot for sets that are cool to display and have great playability. Which is why I think the best set from the year 2000 is… 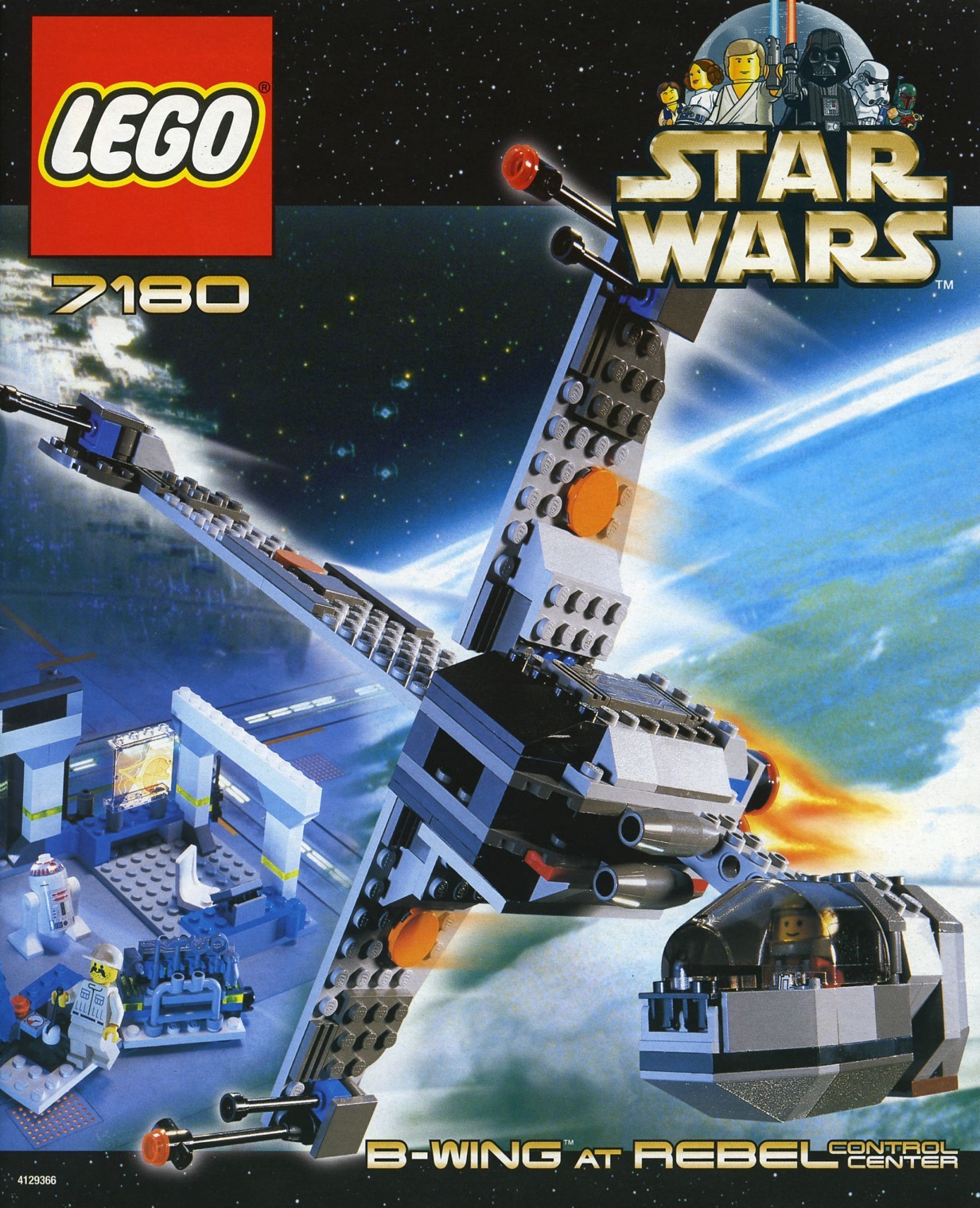 I know what you’re thinking. How could such a small set beat the UCS models?

Part I: The Minifigures

Alright, so the minifigure roster for this set isn’t all that impressive, but it does have some, so it beats the UCS sets in that department. Readers from my last article may recognize the first minifigure on the list from the TIE Fighter & Y-wing set. R4-D5, R5-D4, or standard red astromech droid (whichever you want to call him) makes a comeback as the tagalong droid for the rebel B-wing. Apparently, LEGO really liked this droid as it appeared in LEGO sets from 1999 to 2007.

Anyways, as it’s the same exact version as the one from TIE Fighter & Y-wing, I don’t have anything new to say about it. All I can say is that it serves its purpose as a rebel droid, though it would’ve been nice to see a different color scheme for it or even have a protocol droid like C-3PO to go with the control center part of the build since R4 doesn’t have a compartment on the B-wing like it did for the Y-wing.

The B-wing pilot (which has the overly lengthy official name of Rebel Pilot B-wing (Yellow Head, Light Gray Helmet, Trans-Yellow Visor)) is rather simplistic and looks like he just jumped out of LEGO Space from the eighties. His torso uses the same design as Dutch Vander and the other rebel pilots, though this time it has a red color scheme instead of the typical orange. It’s nice to see LEGO pay attention to universe continuity (we see their red uniforms in the briefing room scene in Return of the Jedi). As his long name suggests, he also has a helmet with a trans-yellow visor. The B-wing pilot is nothing fancy, but he is exclusive to this particular set.

Lastly, my favorite minifigure of the set: Rebel Technician. While the B-wing pilot looks like he came from LEGO Space, the Rebel Technician looks as though he came from a LEGO City set. His beige cap and torso look pretty plain and not like many other outfits from the Star Wars galaxy. But I love it anyways. Why? Because of his bushy mustache. At this time, a lot of minifigures had that standard yellow smile face, so the thick mustache and black dots of stubble are a welcome change of pace.

The B-wing is the most underrated Rebel starfighter out there. It is the starfighter that has the second least number of remakes (Rogue One’s U-wing currently only has one), it has the least amount of screen-time in the original trilogy, and is the only fighter that is used by the Resistance in the sequel trilogy that doesn’t have a LEGO set. I, however, love the B-wing, which is one of the primary reasons why I chose it as 2000’s best set, but there’s more to it than that.

Like many Star Wars ships released in this era, the B-wing isn’t the prettiest to look at with so many exposed studs, but it captures the look and the gyroscopic capabilities of this fighter. The B-wing having two different flying modes is why I love the ship so much, and LEGO managed to build a compact model that allows you to easily switch back and forth between those two modes. The B-wing isn’t as iconic as the X-wing or Y-wing, but LEGO still put a good effort forth and made their set accurate and included some great playability. 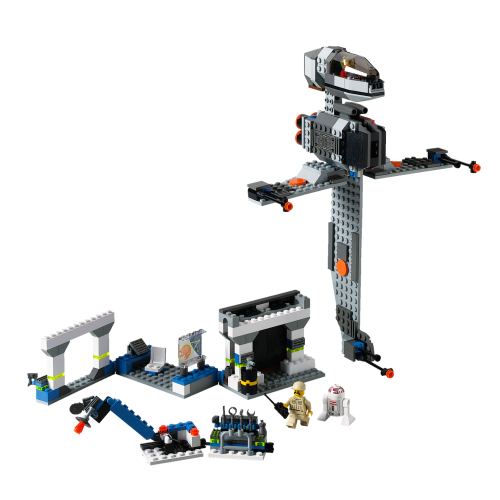 The other reason why I love this set is because of the side build that comes with it: the titular control center. It’s not common these days to get a side build to go along with the ship in LEGO Star Wars sets, and it wasn’t too common in 2000 either. You got the Starfighter, the minifigures, maybe a service crane. LEGO could have easily just released the B-wing as a $20 set with just the B-wing. Instead, they decided to go the extra mile and add a control center (which I believe is supposed to represent the hangar of a Mon Calamari cruiser).

Like everything else in this kit, the control center build is simple, but its cool. It comes with a little work area for the technician that includes a printed 1x4x3 that shows an image of the second Death Star with the energy shield surrounding it. Honestly, this is one of my favorite printed tiles and one of my favorite parts of this build. And, it also comes with a service crane with a little supply rack attached to it.

So yeah, the B-wing set is minimalistic, the minifigures are nothing special, and outside of the printed second Death Star piece, there’s nothing too fancy about the control center build. And sure, the Millennium Falcon, the MTT, and the UCS models are definitely cooler. But the B-wing at Rebel Control Center set gives me a warm, nostalgic feeling that reminds me of the early days of LEGO Star Wars. I’m sure kid me would have loved this B-wing, and that’s the whole point of this set. Something for kids to have fun with. The whole set just shouts playability, from the multiple flying positions of the ship itself to the control center where one can set up their minifigures and (partially) recreate the briefing room scene from Return of the Jedi.

All this set is missing in my book is an Admiral Ackbar minifigure. Alas, LEGO wouldn’t release a minifigure for this amazing character until 2009.

Until next time, May the Force be with you!

Images from Brickset and LEGO.com