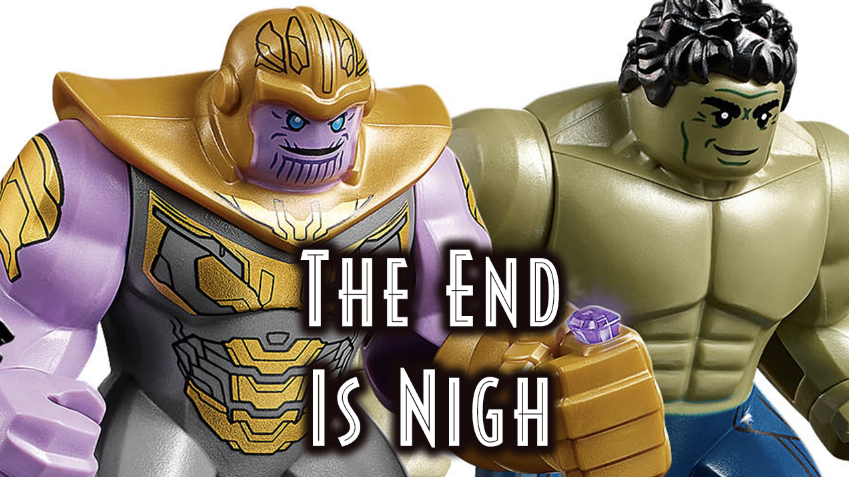 Avengers: Endgame has finally arrived in cinemas. At the time you are reading this, the internet will be over-run with discussion and speculation. Where will the MCU go next? Was this a worthy culmination? What does the future hold for our favourite superheroes?

Well, I will be enjoying Avengers Endgame in about five hours’ time (All booked with Cineworld – yippee!). But for those of you who have either already seen it, or are looking for content to fill the time with, I thought we’d collate some fun Avengers Endgame content in the same place to mark this monumental week in cinema history. So, grab some popcorn, and join us as we dive into a world of LEGO Avengers Endgame…

The amazing Huxley Berg Studios, who we have touched on in this past, made an incredible recreation of the second Avengers Endgame trailer we received. It is particularly poignant here, I feel, seeing some of those single-colour coded sequences in LEGO form. They capture the emotional beats this trailer went for, and communicate the overall tones and themes from the original trailer well. I particularly like the attention to detail in this trailer – and, of course, the cameo of the SI-Dan Glock which Black Widow uses. Overall, this trailer is a fun recreation of one of the newer trailers for the film – working wonders in getting me excited for this cinematic spectacle! As a fun side note – does this make anyone else dream of a LEGO Avengers 2 Endgame DLC? I think that could be a ton of fun – but heck, that could just be me!

Bringing you an alternative look at the same trailer is NEO25 – another fantastic animator who we looked at in my favourite Marvel animations article. NEO makes some interesting choices here – particularly some which are different to Huxley Berg’s during the duration of the feature. I particularly like NEO’s choice for young Steve Rogers – with the torso piece looking particularly fitting for the younger version of Cap we see in the First Avenger. It’s also fun seeing alternative interpretations of the characters we see on screen in both variants – as ultimately, that encapsulates nicely what LEGO is all about. LEGO is all about how we, creatively, interpret something – and both the similarities and differences between these two trailers really drive that home.

Whether you’re recovering from the aftermath of Endgame or getting yourself hyped up for it, I recommend checking both awesome trailers out.

Of course – another way I usually build hype is by checking out some of the fantastic reviews which are out there on brand new toys! I’ve linked a handful of my favourite channels below – but you may wish to check out more and I encourage you to go away and do so. Different opinions really do make the difference, so hunt far and wide – and let us know what you find!

I always love seeing the new MOCs and builds that brand-new Marvel films will inspire – and Avengers Endgame is set to be no different! The film looks set to place the upstate New York Avengers facility in prime place – with the facility featured in numerous TV Spots, trailers and pieces of concept art. LEGO themselves even got in on this – providing us with our first ever, albeit it small, model of the facility itself.

However, not content with LEGO’s rendition, YouTuber Brick Hunter went about constructing his own facility, and I must admit, I really do appreciate some of the architectural prowess on show here. Everything from the sharp corners, to the refined interior and the modular nature really do make for a fun, larger-scale rendition of this iconic building. This in-universe building is SCREAMING for a D2C rendition, but in the meantime, Brick Hunter makes an incredible rendition of it, and one which I am sure all LEGO fans will really appreciate.

Now, as if this wasn’t enough, Brick Hunter was also able to recreate the iconic hanger building we see in Captain America: Civil War and then the films after – complete with the ability to hold a Quinjet inside. I really, REALLY appreciate the fact that Brick Hunter went above and beyond to create both structures, so I really wanted to highlight them. If you are a fan of LEGO Marvel like I am, then I am sure that you will love these MOCs. Make sure to go and leave a comment on Brick Hunter’s videos!

BrickBros UK are well known for their creative usages of parts to make different characters and minifigures – so I wanted to take the opportunity to highlight one of their videos here.

Just like that, you have a really easy way to get your own rendition of the MK85 WITHOUT having to buy the £100+ 76131 LEGO Avengers Compound Battle set. And, if you keep this super-secret, I think some of these Iron Man LEGO parts may even be available right now on Firestartoys.com, so you’ll have your own MK 85 in no time!

Now, another great video I also spotted was by MJ at Brick Burst – highlighting how the new piece Captain America mask from the Avengers Endgame sets can be used to improve older LEGO Minifigures. I really like how the Cap helmet looks on the Age of Ultron body, so I am planning to experiment with parts once I pick up this set to really see if I can create my own ‘ultimate’ version of Captain America. What do you all think? Check out MJ’s great video below.

I also wanted to touch briefly on this great video by Hobbricks as well. Sometimes the most creative part usages don’t get enough recognition – and Hobbricks got creative with some of their part choices when creating their own Avengers Endgame LEGO Superhero Minifigures. I particularly like their version of Ronin, a LEGO Minifigure who we have yet to see, and their interpretation of casual Ant-man. I have never even considered putting brown arms on Owen Grady’s torso to create a jacket and I am a MASSIVE LEGO Jurassic World fan – so it just goes to show that we can all get a little bit of inspiration from one another now and then. Make sure to show it some love below.

So, as you can all see, there is lots of great Avengers Endgame content out there for you to enjoy as the hype around the film continues. Have you already seen the film? What did you think? And have you managed to pick up any of the New Avengers Endgame sets? Let us know in the comments below, and have a Marvel-ous week wherever you may be!