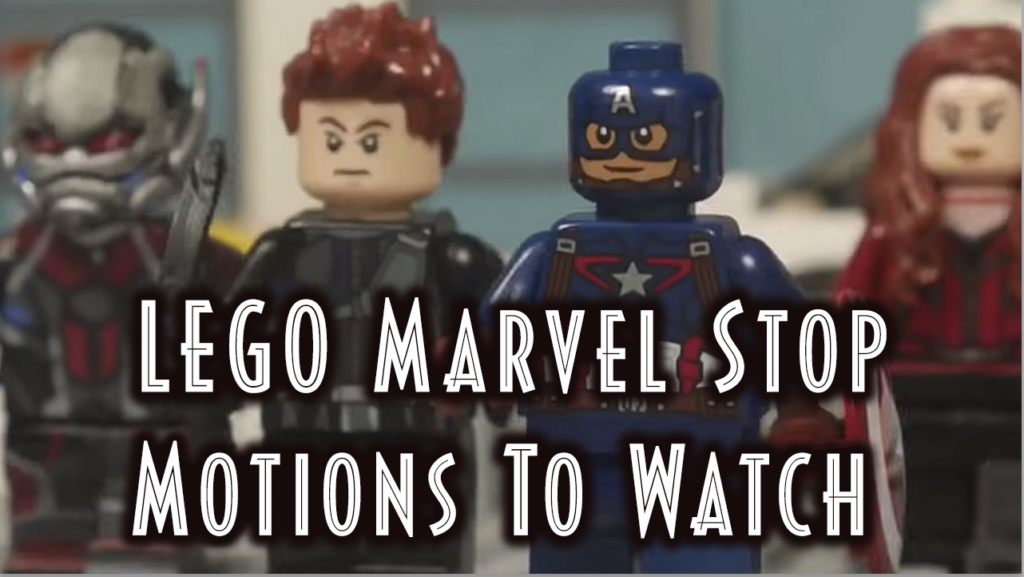 Can you believe that we are just one week away from Avengers: Endgame now?!? This reality-shifting, ground-breaking movie is bound to leave us all working away questioning reality itself – and I must say, I am incredibly excited to do just that! Before we kick off today’s article, I wanted to take a moment to reach out to you all and ask – have any of you picked up the Avengers Endgame LEGO sets yet? If so, what do you think? I’d love to hear from you below as I am debating which ones to pick up myself!

Now, without any further ado, to keep the Marvel hype alive today, I thought we would look at some of my absolute FAVOURITE LEGO Marvel Stop Motion animations which you can check out on YouTube. There’s lots out there – far too many, in fact, to collate within this single piece, so instead I am going to focus on talking about some of the more memorable ones which I have discovered during my tenure as a LEGO Marvel fan.

Up first, we have LEGO Civil War by Keshen8 – released to promote the release of Captain America: Civil War. This fun LEGO Marvel stop motion dives into a fierce battle between both Captain America and Iron Man, and it also plays on a lot of funny concepts throughout the short feature which look fantastic. There are a few things to note about Keshen’s animation style which I personally feel really make him worth checking out.

First, we have the fluidity of the stop motion. For anyone who doesn’t know how stop motion works, it is based on a series of photographs, which we refer to as frames. To get smooth movement, several thousand photographs must be taken, with a LEGO Minifigure moving by a fraction of a millimeter on each occasion, to get a flush and smooth animation. It can be incredibly difficult to do this well – but Keshen’s clear attention to detail, combined with some smooth visual effects, really helps to make an animation which is fluently connected and which, crucially, does not feel as though it is comprised by several thousand static photographs. This fluent animation is what every stop motion creator strives to achieve.

I also really like Keshen’s attention-to-detail with the set design in this short. Having not only the nice Hall of Armour background for one sequence, but also a location which mimics the end battle of the film itself, really helps to sell this film and ground it within the MCU theme it is going for.  Keshen’s slightly more ‘adult’ sense of humour as well makes his animations perfect for AFOLs who are looking for some light-hearted LEGO fun. I really appreciate Keshen’s work and all the animations he has out there – so I would recommend checking them out if you haven’t already, as they’re bound to get you even more excited for Avengers: Endgame.

Sometimes, the most fun we can have with a LEGO stop motion is when we recreate something which is seen on-screen, and that is something which NEO25 aimed to do with his re-creation of the opening on Infinity War. This sequence depicts Thanos’s initial assault on the Statesman in the film – the ark of refuge which we see the Asgardian people escape onto at the end of Thor: Ragnarok. In this animation, I really like how NEO25 uses visual effects and trickery to add depth and dimension to his animation.

Whether it be the overlaid, realistic-flames to mimic the destruction of the film, or the lens-flare effects used to mimic the power of the Infinity Stones, NEO25 uses some interesting techniques to convey a strong degree of visual storytelling. I also really appreciate how photo-realistic sets have been used where possible – an interesting alternative to the usual brick-built sets we are used to seeing in all forms of LEGO videos. Of note in this piece, for me, is the sequence at the end where Thanos destroys the Statesman as he escapes back onto his vessel. This sequence felt crisp and incredibly well-crafted – and really emphasises the overall quality of this piece.

If you want to relive Avengers Infinity War ahead of the next film releasing next week, then this is a fun, tongue-in-cheek way of doing just that. I recommend checking it out.

Next, I wanted to touch on the very first “LEGO Marvel-themed” animation which I stumbled upon – all the way back in 2014. This was back when a much younger Tom didn’t quite understand the way LEGO release calendars worked, and was desperately hoping that a LEGO Captain America: The Winter Soldier set was in the pipeline for release. Of course, that sadly never came to fruition, but that didn’t stop young Tom from imagining sets of Captain America vs The Winter Soldier, or S.H.I.E.L.D SUV chases down busy LEGO streets. So, you can imagine my delight at that younger age when I stumbled upon a trailer which re-made the initial Winter Soldier trailer entirely in LEGO.

Antonio and Andrea do a fantastic job of capturing the right beats in this trailer – matching up to the actual on-screen footage to really communicate the overall content of the trailer in a LEGO form. One thing of note to me here is the creativity we see in the set construction. Everything from the zoomed-out shot of Washington DC to the shots of the ‘Project Insight’ Helicarrier bay show a degree of creativity and thought which I think only LEGO can inspire. Oftentimes, you won’t have all the pieces you want, so you must get a little creative to achieve certain effects – and that creativity certainly shines through in this piece. This trailer, just like some of the others we have touched on, also combines great practical and visual effects to a good degree of success.

Captain America: The Winter Soldier has stuck with me as my favourite film in the Marvel Cinematic Universe to date. It was gripping, action-packed and tense – and this trailer captures all those different beats perfectly.

One of my favourite moments in Avengers Infinity War was when my favourite hero, Captain America, steps out of the shadows in Edinburgh to join the fight which is unfolding between the Black Order and Scarlet Witch. So, imagine my excitement when I saw that AkashLEGOProductions – someone who makes BRILLIANT LEGO animations, had made one which depicted that scene.

I want to start first and foremost here with the set design. The set design for Waverley Station, as it appears in the film, is phenomenal here. Everything from the iconic pillars of the older-style architecture, to the simple train timetable displays and the ticket machine in the background all afford us a phenomenal level of detail – and this is all detail which can be taken from the FIRST FRAME ALONE. How incredible is that?!?

The fight sequences themselves are smooth and flush – and I particularly appreciate the effects which Akash has painstakingly edited in here to communicate Scarlet Witch’s powers. The use of VFX across this short LEGO Marvel stop motion animation really helps to communicate the sequence well – leading to a great pay off.  The fight montage we then get greatly mimics what we see on screen – making subtle changes to pay-off more in the LEGO form we witness it in.

Overall, this is a PERFECT recreation of what we see on screen in Infinity War, and is another fun way for fans to recap ahead of the debut of Avengers Endgame next week.

I saved one of the best till last – and that is with good reason. I don’t just intend to touch on the Civil War Airport sequence here, but rather Huxley Berg’s animations in general as they have ALWAYS been ones which I have enjoyed. Huxley uses a great level of detail here – building large sets which really reflect the grandiose scale that all the Marvel films aim to capture. Furthermore, he uses clever green-screen trickery to achieve some fun effects, such as the micro-version of the Ant-man character which we see appear in this animation.

Just like the other animators who we have featured, Huxley’s work is smooth and crisp – and he captures the sequences which we see unfold on screen incredibly well, hitting all the key beats which are reflected in the actual film itself. Sequences like Spiderman crashing into the pile of boxes really highlight how smooth the animation is, whilst also showcasing clever camera angles to capture a real sense of both scale and movement. Huxley’s work really is perfect – as is the work of many of the animators we have featured today.

So, to conclude, there are lots of fantastic LEGO animations out there which you can enjoy. YouTube really is a goldmine of fun LEGO Marvel content – whether it be stop motion, reviews, customs, or more – so I really recommend you take the time to sink your teeth in and explore if you haven’t already.

All that said – have you found any cool animations that we haven’t? Or have you made your own? Leave them in the comments below as we always love to see what our readers think. Thanks for checking this piece out – and I’ll catch you in another one, very soon.

And don’t forget to check out all things LEGO Avengers Endgame right here!