So, here’s a confession; I don’t just have LEGO in my toy box. I suspect that a very large percentage of the target audience (i.e. children) aren’t tied to the single brand either. My collection includes all manner of toys; a quick glance at my Instagram feed will show that in all its glorious, plastic detail. In this article, I’m going to look at the compatibility of LEGO with other systems – some of which will be interlocking brick construction systems, others are totally different. So as a warning, this article will feature non-LEGO images – and I’m not sorry.

What else can be in the toy box? 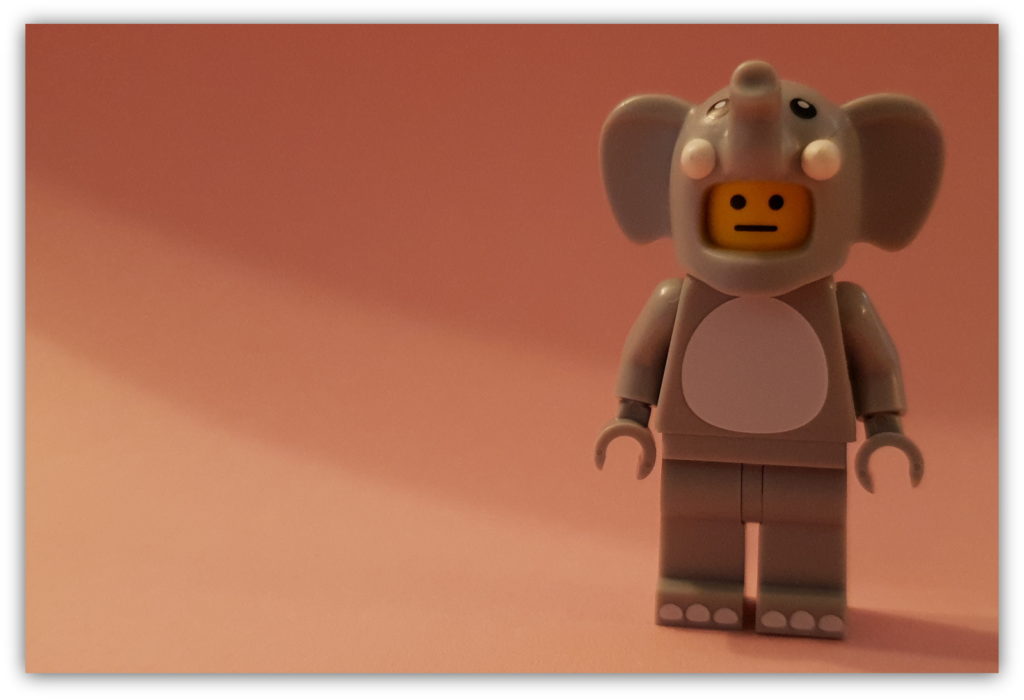 Let’s start by dealing with the elephant in the room. There are very cheap Chinese copies of LEGO sets and figures out there (I know, I have some). The printing is often not as good, or the tolerances and clutch strength will vary, but for parents and grandparents not wanting to spend much on a toy that will end up in a large cardboard box, these seem like good value. And yes, they are compatible with LEGO. However, this alternate market can produce figures that LEGO either could not or would not produce; a child-friendly example is the Marvel/Disney Captain America Mickey Mouse below. 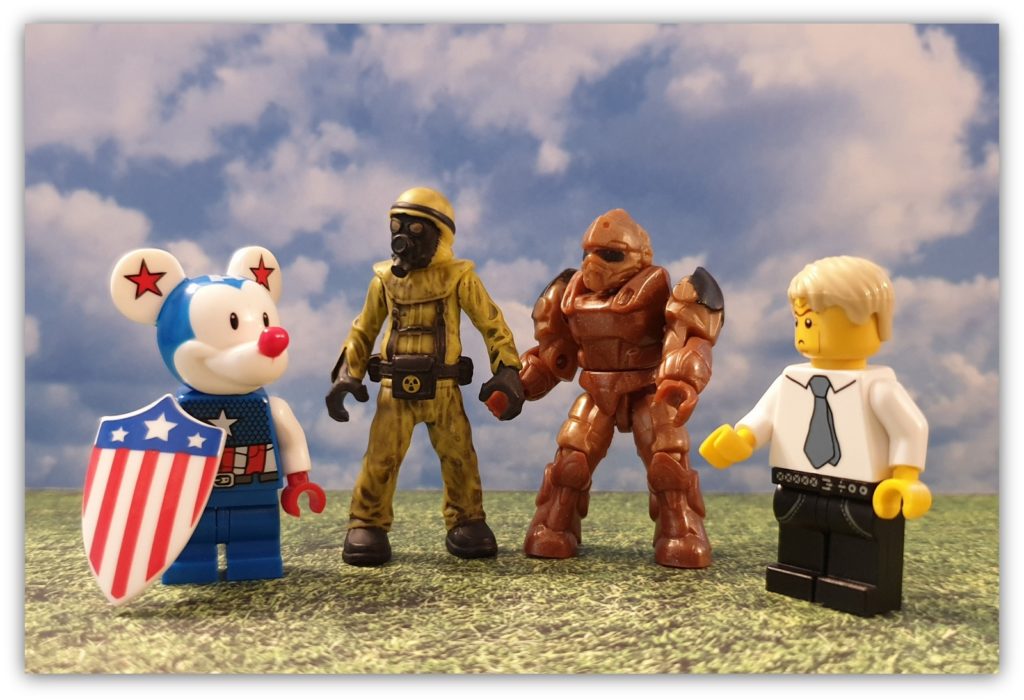 But the cheap copies aren’t the only toy manufacturers in town; there are systems available that have been covering other licensed distributions. These include Mega Bloks who have produced sets for HALO, Call of Duty, Barbie, Spongebob, Hello Kitty and the Minions to name a few (of course, the Minions will be coming to LEGO soon!). There are Character Building toys who have produced the Doctor Who licensed series and the HM Armed Forces collection. Finally, there’s the ‘new’ kid on the block (if you pardon the pun): McFarlane Toys who have produced construction sets for Game of Thrones, South Park and more recently Bendy and the Ink Machine.

From my AFOL perspective, these sets enable me to expand scenes with accessories and figures that LEGO have not been able to produce. In some cases, such as Character Building, some parts of the figures (such as the heads) fit the standard figure without any modification; in other cases, I can just share some of the elements and parts. 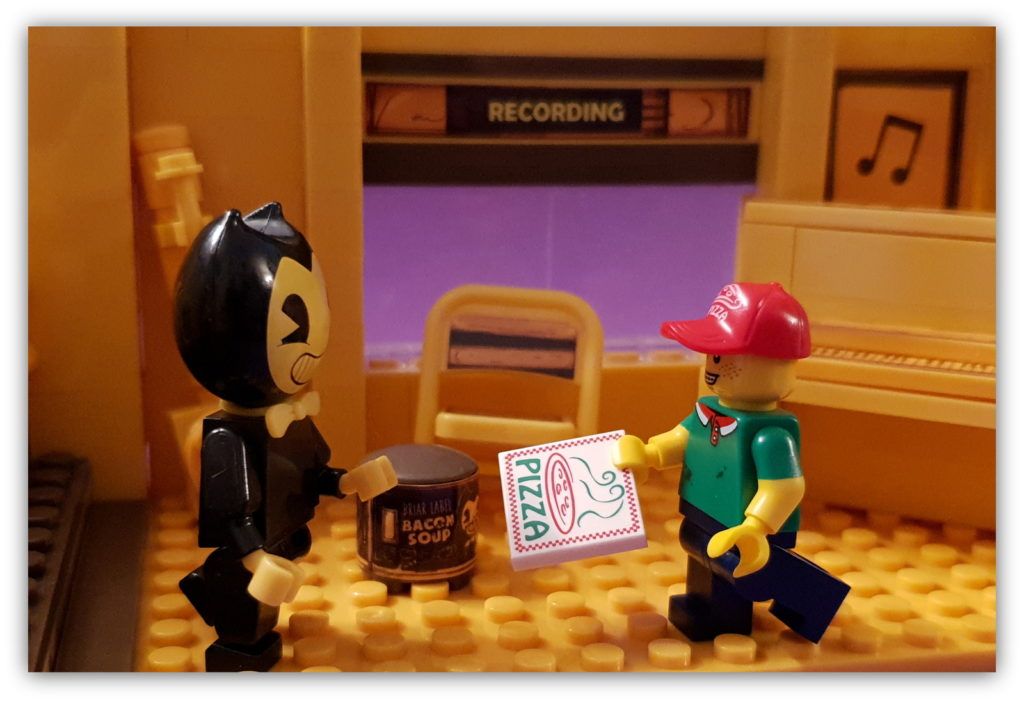 We’re all in it together

One thing that supposedly makes all this so worthwhile is the ability to interact. Many of the non-LEGO sets have something on their boxes that say something along the lines of “compatible with other brick-construction systems” – which of course in non-commercial speak means “fits with your LEGO set”. Certainly, there is a lot of cross-platform compatibility within LEGO; even DUPLO bricks fit with standard LEGO ones (more or less). This, of course, is something that we all know, so it isn’t really a surprise.

It’s the compatibility of LEGO and other construction toys with others is where the fun begins.

Recently I discovered that Hot Wheels had started to produce a set of cars that would enable a Hot Wheels figure to interact with it. What I thought was unusual was that I hadn’t seen the figure that I was supposed to use. Could it be that this would fit a LEGO figure? 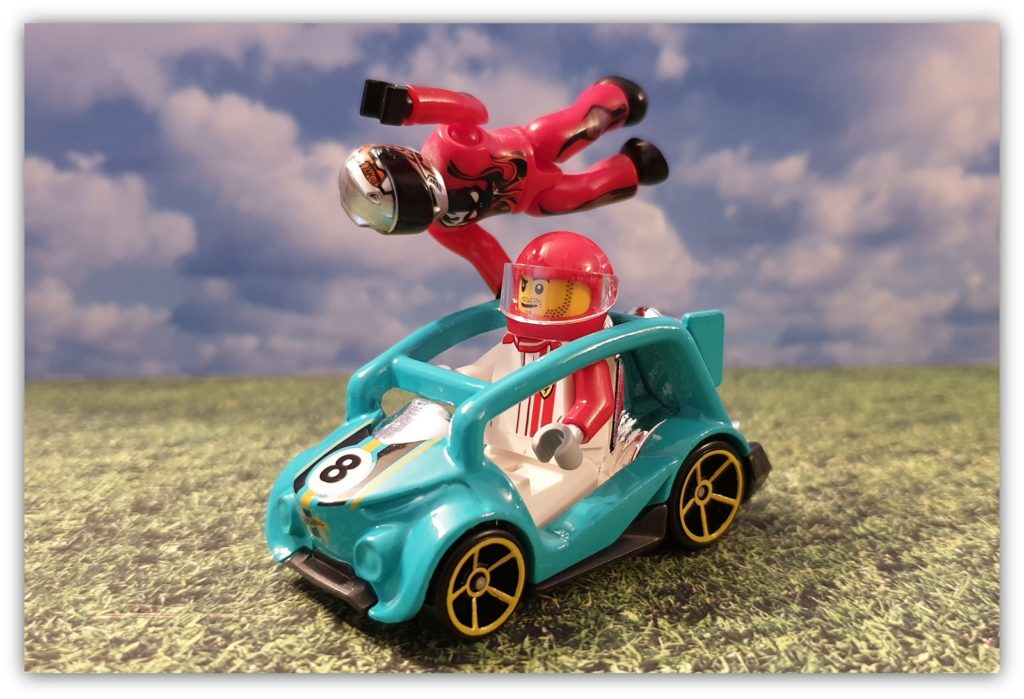 Whilst I have always had some LEGO to hand, I really got back into using it when I started to create a website for my Scout Troop. I wanted to show how to do things like read a map, put up a tent but without having to go and do it. What better way than to create the scenes using toys that I had laying around? 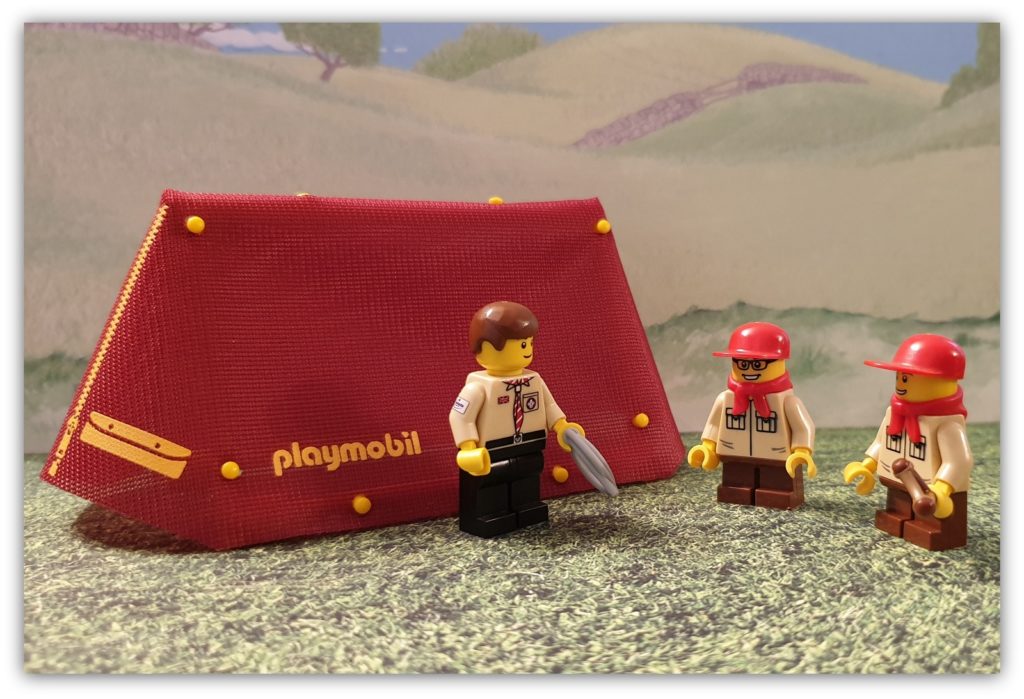 I think the image above is a good example of the type of thing I could do. Whilst the Scouts themselves are “standard” LEGO (I bought mine a while back, but there is a great little figure here and all he needs is the troop scarf), the Scout Leader was a custom printed figure. But the tent behind is made by Playmobil (yes, LEGO have produced tents in the past, and even a more modern frame tent). 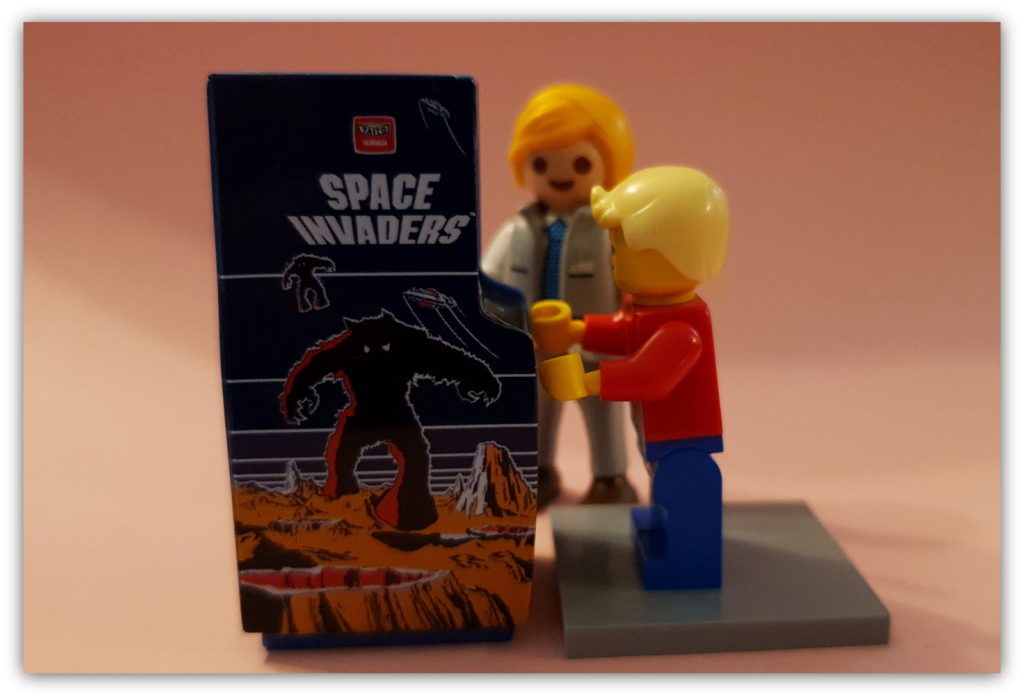 For many years I have created a story for Christmas, using the LEGO City Advent Calendar

, existing figures as well as whatever cool custom parts I’ve bought… and anything else that fitted to the scale of the story. Monsters look way scarier with the right sense of perspective: 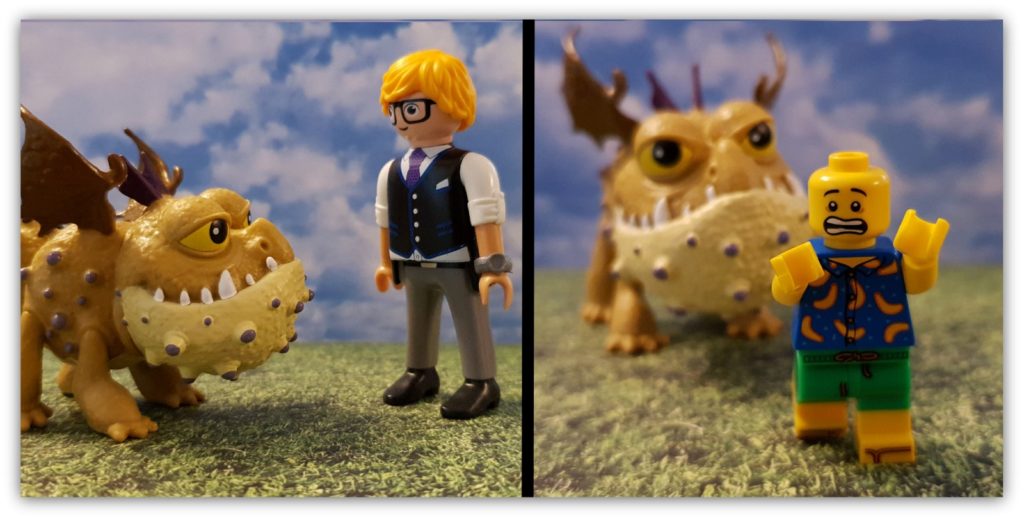 I also use several background cards in my pictures (as they make the image look better than just my very messy desk). The challenge is getting that scale right. Back in 2016, the supermarket Sainsbury made a Christmas advert and off the back of that ad campaign worked with the publisher Walker Books to create a set-in-a-box to enable children to create their own Christmas stop-motion films. I used mine for scene setting for the advent story. The scale wasn’t quite right, but it sort of worked. 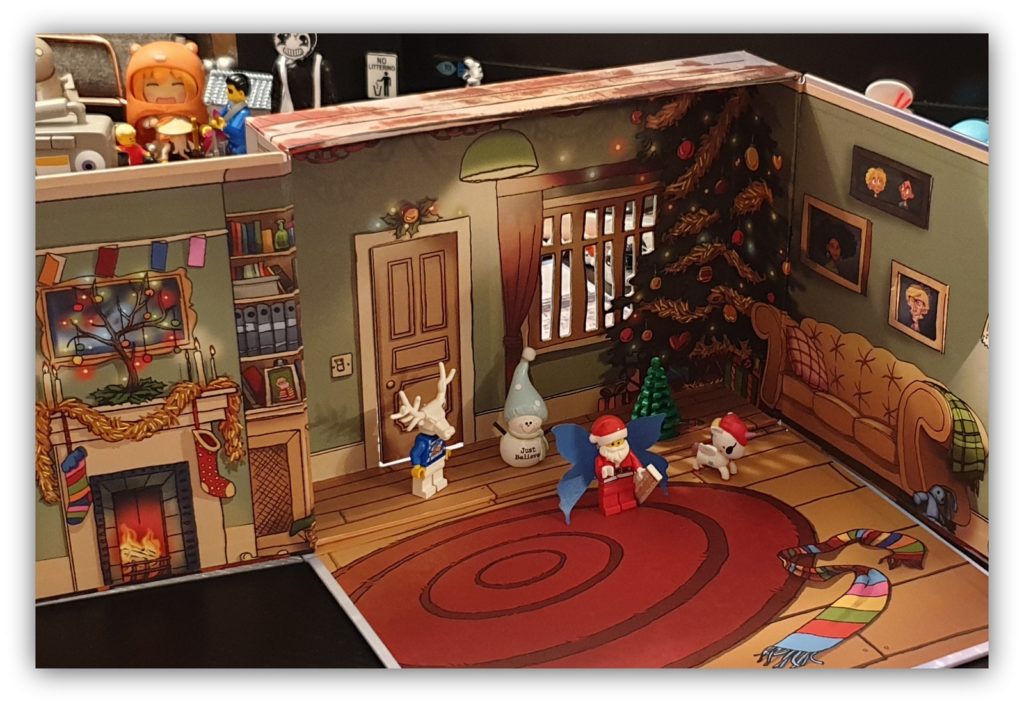 It’s the sum of the parts

As I mentioned, some other non-LEGO construction sets are compatible with LEGO. This meant that somethings worked well with LEGO figures without issue. This is especially obvious when you look at custom printed, or custom-created parts and accessories. 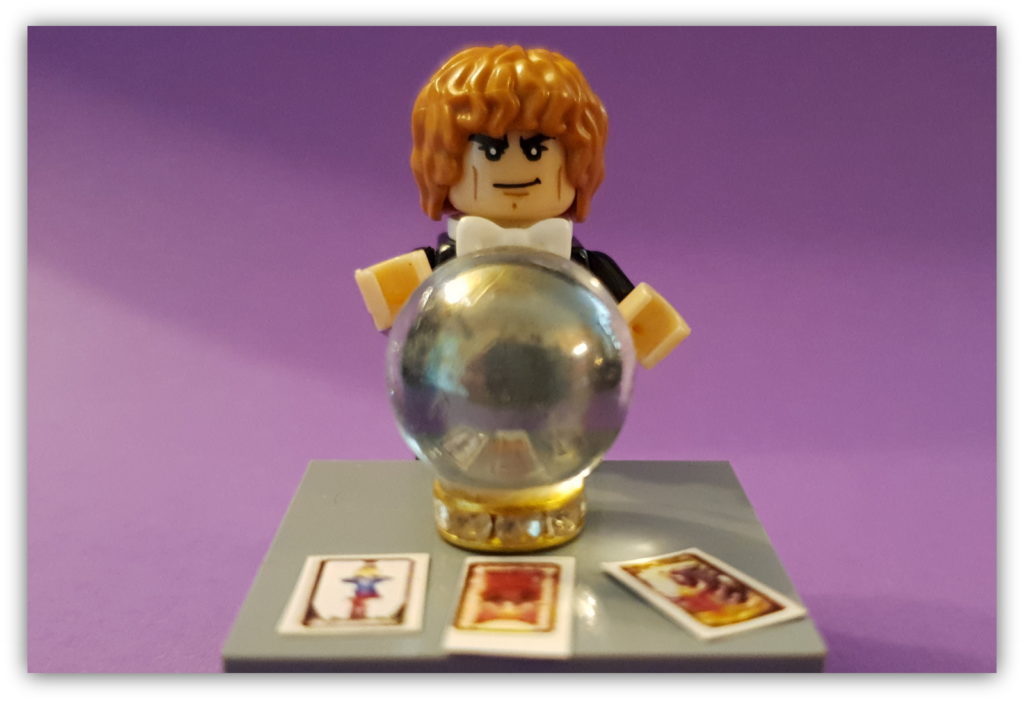 But some items aren’t “interlocking-construction” based toys and they also work. Some of the smaller scale doll accessories work quite well as do some of the HO scale railway accessories. I have had some success working Playmobil with LEGO, but in the most part it works better the other way around. 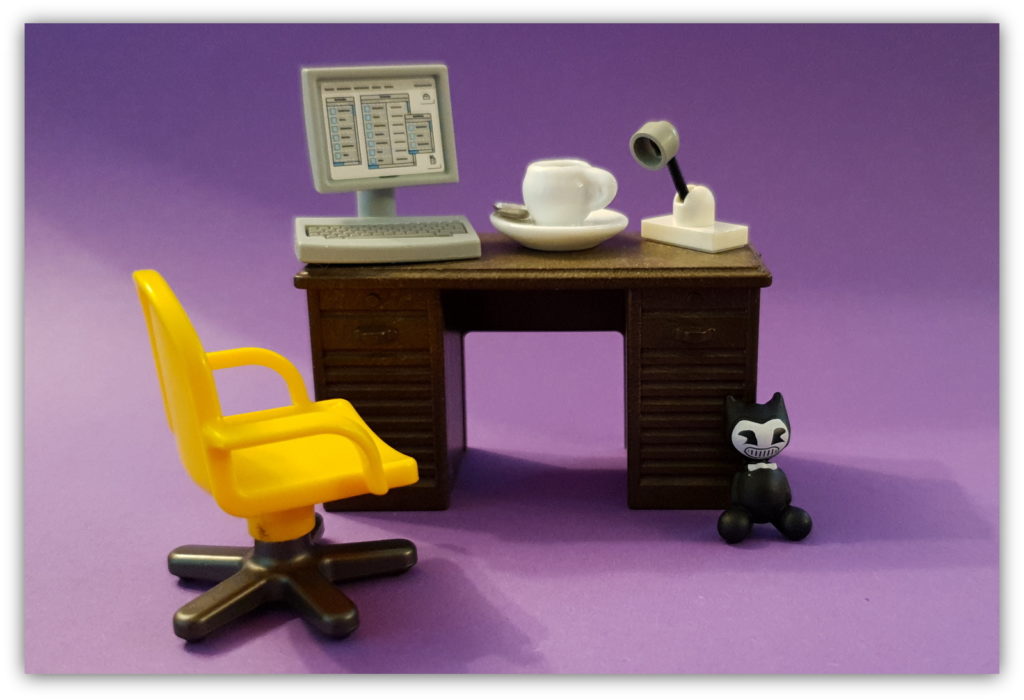 However, sometimes thinking outside the box can introduce some weird but wonderful results. For example, by making the holes in jewellery beads a little bigger I created some very unusual new heads for my Friends mini dolls; similarly using a round 1×1 brick I converted a pen topper into a very impressive rabbit head! 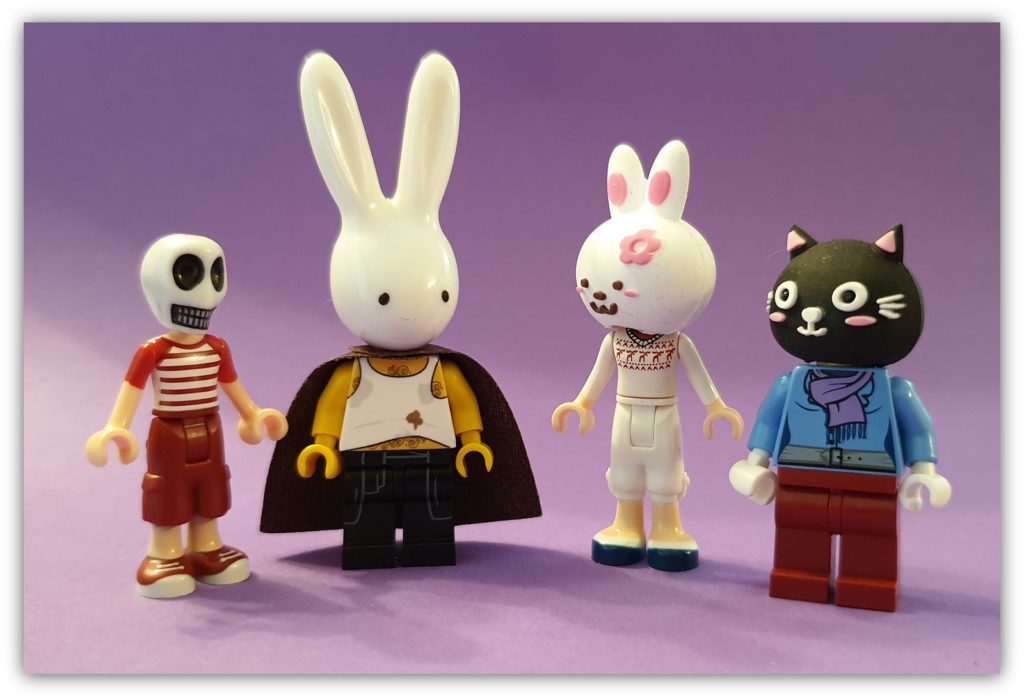 Does it play well?

If you didn’t know, LEGO is a derivation of the words “leg godt”, which means “play well”. Whilst LEGO is clearly the market leader, its policies (and commercial franchises) means that there are opportunities for other toy manufacturers to get a bite of the pie. From the consumer perspective, that these various manufacturers seem to be able to agree on interlinking brick compatibility is a good thing for everyone.

But interlocking construction toys aren’t the only toys out there. Playmobil, Disney, Good Smile Company, Hasbro also make toys to be played with. Whilst these haven’t been designed to be compatible, some elements might – and sometimes work well.

Ultimately it comes down to one simple thing; they can get along if we allow them to. 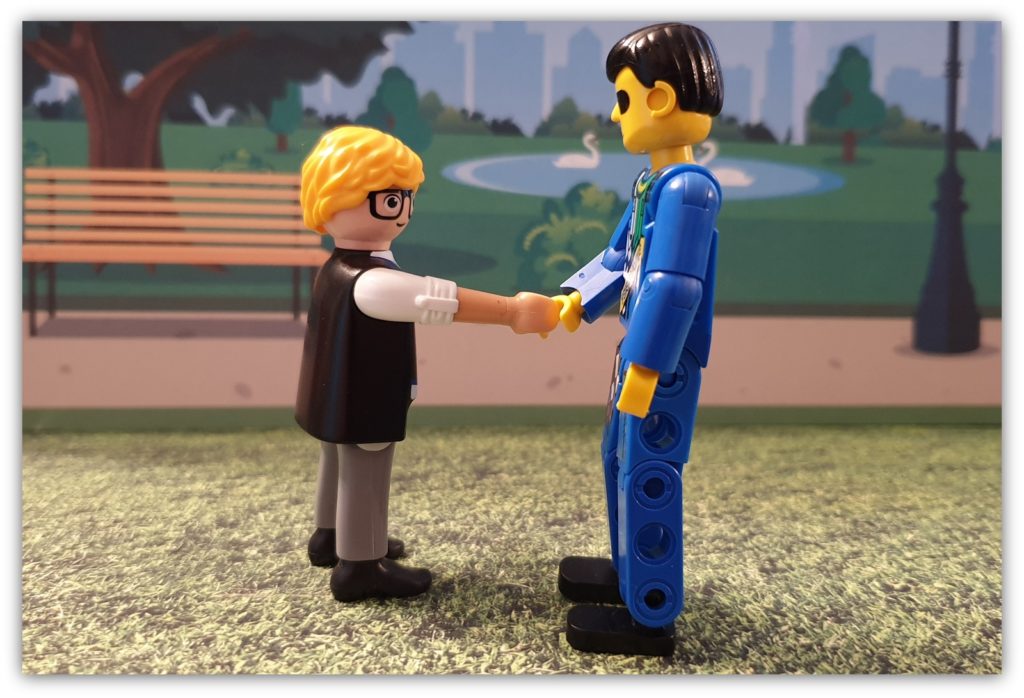