“Often I ask myself if it could not all have been a pure phantasm[…] I cannot think of the deep sea without shuddering at the nameless things that may at this very moment be crawling and floundering on its slimy bed, worshipping their ancient stone idols and carving their own detestable likenesses on submarine obelisks of water-soaked granite. I dream of a day when they may rise above the billows to drag down in their reeking talons the remnants of puny, war-exhausted mankind—of a day when the land shall sink, and the dark ocean floor shall ascend amidst universal pandemonium.” 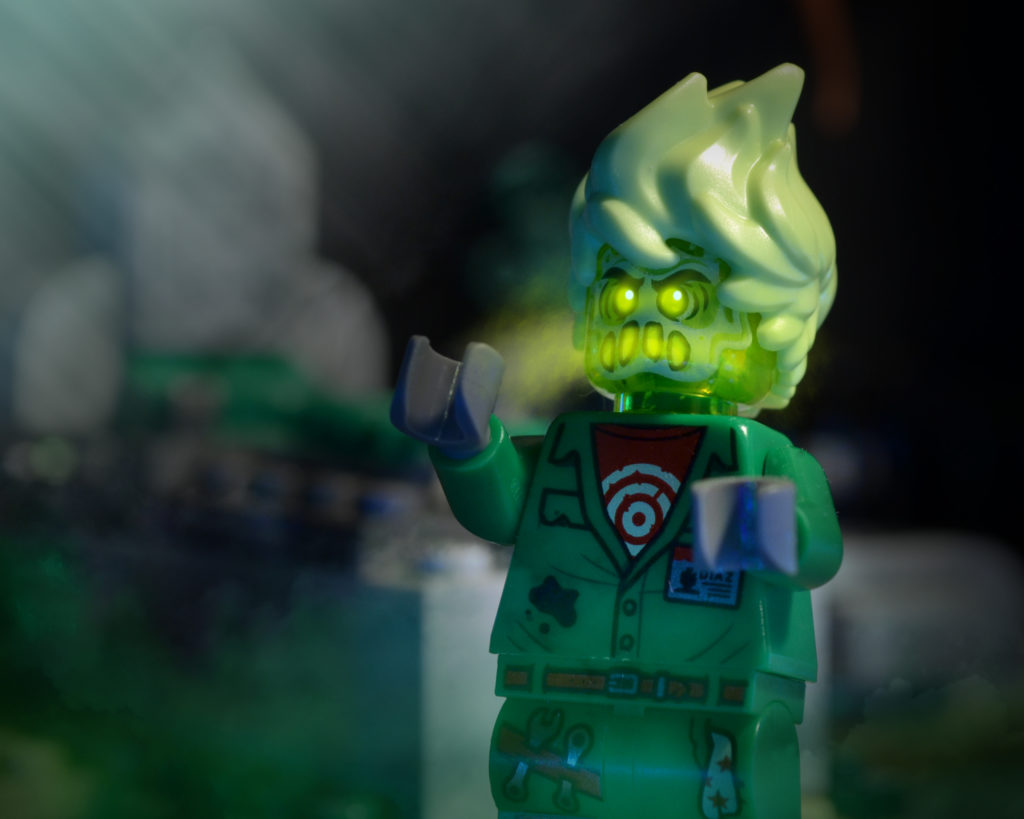 Not the sort of story you would expect LEGO to adapt for a theme, licensed or non-licensed, nor one you might expect to have influenced countless childrens’ books, films and TV shows. But here we are in 2019, 82 years after the death of Howard Philip Lovecraft, talking about a new LEGO theme that reminded me of his works the second I saw it. Yes, I am referring to the new LEGO Hidden Side theme, where two Pokemon Go players wander the fictional coastal town of Newbury (not the real-world Newbury, UK – I wonder what the residents think?) catching ghosts with their phones.

LEGO has done themes with ghosts and monsters before, and I’ve covered some in my Myths and Minifigs series, but what makes LEGO Hidden Side stand out to me as something darker?

I mean, aside from the fact that one of the main characters is the ghost of the protagonist’s recently-deceased dog. That’s pretty dark already. Yikes, LEGO!

The cold shadow of H.P. Lovecraft can be felt in sci-fi, fantasy and horror fiction from writers around the world, of all ages, and with good reason. While Lovecraft’s penmanship wasn’t the most artful, he had some fantastically terrifying ideas, unlike anything the world had truly seen (or read, I suppose) before.

The horror in his work is a cosmic horror, tapping into humanity’s existential musings and nightmares – are we alone in the universe, why are we here, etc – by way of a set of godlike, otherwordly beings whose true natures are incomprehensible to mankind. The most famous of these is Cthulhu, the sleeping titan whose head resembles an octopus and who would destroy the Earth just by waking from his slumber. They are all beings of immense power and scale, able to snuff out civilisations with a single putrid breath, and the sight of many of their true forms would drive a person to madness.

However the true terror of Lovecraft’s elder gods was in their sheer indifference to humanity. A world-ending catastrophe could be set in motion by any one of them, but to them, we are less than ants. They have schemes which span billions of years, and we barely factor into it. In fact, the entire universe is a passing thought in the mind of the blind idiot god Azathoth, and if he should wake, the universe would end. Our lives are held in the gnarled, fleshy, slimey hands of beings who don’t often even acknowledge that we’re here, and this was at the core of Lovecraft’s enduring horror. It’s a school of philosophy now called cosmicism, and few writers have managed to capture it as chillingly as Lovecraft did.

So what does this have to do with LEGO Hidden Side? Directly, nothing, but LEGO designers have worn their influences on their sleeves for years – from the Indiana Jones aesthetic of Adventurers and Pharaoh’s Quest, to the James Bond/GI Joe-inspired Agents and Ultra Agents. Lovecraft’s own influence on fiction is so widespread that where LEGO may be referencing a film or book, that in turn could be paying homage to Lovecraft. His ancient abominations and the fear they inspire have seeped into everything, and as a fan of this kind of horror I couldn’t be happier.

What is LEGO Hidden Side?

To provide some context, the story of LEGO Hidden Side is (as far as I can glean from the app and limited set descriptions) as follows: the sleepy coastal town of Newbury is currently beset by ghosts, who are rising across the area and possessing both the residents of Newbury, and parts of the town itself. Nothing and nobody is safe: the school janitor might reveal himself to be possessed, but so might the local juice bar, or that vending machine you’re leaning against. Even worse, the ghosts are only visible when they choose to attack!

But there is a way to fight back. Professor J.B. has developed a special lens filter for her phone – which she also gives to Jack Davids and Parker L. Jackson, the heroes of the theme – to allow them to see the ghosts even when they haven’t chosen to reveal their hideous nature. And that’s the setup! We don’t know a lot about the ghosts or where they came from, but they’re currently swooping around transforming everyone and everything into a tool of destruction.

First of all, ghosts aren’t new to LEGO. Hidden Side is not the first theme to show us a town or realm plagued by the undead, that honour goes to a smiling, glow-in-the-dark green apparition from 6034 Black Monarch’s Ghost in 1990. Since then we’ve seen all manner of sinister spectres. The Banshee from 71010 Collectable Minifigures Series 14, the Flying Dutchman from 3817 The Flying Dutchman (I always forget there was a Spongebob Squarepants theme) and the Oathbreakers of Dunharrow from 79008 Pirate Ship Ambush are all among LEGO’s catalogue of the restless dead, and for the most part they’re all pretty varied. Spring green and white are common colours but not a de facto, unbroken pattern, though this is no doubt partly to do with the fact that many of LEGO’s ghosts come from licensed IPs with their own distinct tone and style.

These new ghosts do stick largely to two colours: spring green and trans-neon green, and while the parts used vary, this does give them a uniform quality, suggesting that they are coming from a singular source. The app does show some red and purple ghosts, but they haven’t appeared as physical minifigures so it would be odd for me to include them.

The parts themselves are where we start to see something Lovecraftian. In the past, LEGO’s ghosts have replicated the sheet-over-the-head stereotype, or drifting around on tall, wispy leg elements (like the Banshee’s), but Hidden Side’s deviations are the strangest. The ghosts here have more physical manifestations: Chef Enzo grows two extra arms when he’s possessed, while a member of the biker gang sprouts a pair of gloopy wings. These aren’t just spectres, these are physical monsters, and very reminiscent of the kinds of monstrous mutations that mortals can undergo in Lovecraft’s writing. If imbued with the power of a dark god, a person can be manipulated into becoming something horrible, like the possessed seem to here.

The most interesting of these elements is found in 2 sets, 70421 El Fuego’s Stunt Truck and 70423 Paranormal Intercept Bus 3000. Remember the recent bow tie piece? Or the mouthpiece from a lot of the Ninjago sets? Here, the same principle has been used to give two of the possessed residents of Newbury a mouthful of tentacles, like a beard of roiling, angry worms extending out of their screaming mouths. The effect is great, giving them a look at the far end of the scale of horrifying things LEGO seems happy portraying, and is a callback to one of Lovecraft’s most famous monsters.

“In his house at R’lyeh dead Cthulhu waits dreaming.”

Chances are you either know the name, or have seen the visage of a creature with a dragon’s wings and octopus tentacles where a mouth should be. This colossal abberation is Cthulhu, High Priest of the Great Old Ones, a being of immeasurable might that sleeps beneath the surface of the Earth. All over the world, Cthulhu has entered the minds of cults and practitioners of the dark arts, preparing the world for when he will one day rise and reclaim his place in the galactic pantheon.

The image of Cthulhu is unique and horrible, and the tentacles in particular have been referenced in so much media since Lovecraft’s time in order to try and convey that same sense of alienness and cosmic danger. You might know the Ood from Doctor Who, first introduced as the unwilling psychic servants of a being claiming to be the Devil, but you’re probably more likely to know Davy Jones from Pirates of the Carribean. Aside from octopi (octopuses and octopodes are apparently also correct?) being recognisable and creepy ocean creatures, Davy Jones’ beard being reminiscent of Cthulhu’s maw was a fantastic way to once again convey a sense of something deep, unknowable, and terrible. LEGO made a minifig of him, too!

So what does all this suggest, to me at least, about the world of Hidden Side? Well as I’ve said, the dark gods of Lovecraft’s universe sometimes worked through other, lesser beings like humans. With their pale green tones, and strange physical mutations, it seems to me like the ghosts of LEGO Hidden Side are less the restless souls of the recently departed, and more a set of malicious phantoms sent out by a dark intelligence. Think about it: aside from Spencer the dog, all of the ghosts are malicious, they resemble the Old Ones with their wings and tentacles, and they’re very close to the sea. Could something foul be afoot?

Honestly, probably not. These are all just LEGO’s references to an old horror classic, and nothing more, but it’s a fun thought experiment. Taking these references, this iconography, and pushing it to the maximum. You can do the same for Amset-Ra from Pharaoh’s Quest, and look at what dark deeds it’s implied he committed in the ancient past, but LEGO Hidden Side as a theme spoke to me and I felt that I needed to explore this path. Maybe I’ll apply this lens to other themes in the future, who knows.

Now it’s time to close the Necronomicon and push these horror stories to bed. Maybe LEGO will make something even more akin to Lovecraft’s writings in the future. As unlikely as it is that LEGO will straight-up adapt The Call of Cthulhu or The Dream-Quest of Unknown Kadath for a set or theme, I think we are likely to see the influence of Lovecraft again and again, as it is a shadow that looms large over all horror and science-fiction, not just over LEGO.

“The end is near. I hear a noise at the door, as of some immense slippery body lumbering against it. It shall not find me. God, that hand! The window! The window!”