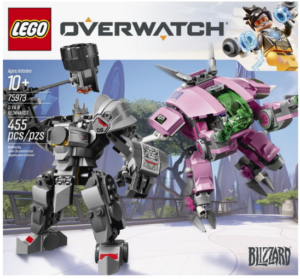 As a child, there were three things that mattered to me most in life; LEGO, Star Wars, and video games. So when I discovered that Overwatch was getting its own LEGO brand, I was immediately excited and eager to get my hands on them. Because I’m currently going to school and am unemployed, I don’t usually have money to spend on things like this, but whenever I can I do. A little over a month ago, I cracked and thought I would treat myself. So I bought the LEGO Overwatch set 75973, which is D.Va and Reinhardt. Arguably two of the most recognizable characters and two of the most played tanks in the game, I had to pick this one up and see how they compare to their in-game models and how the build process would be. 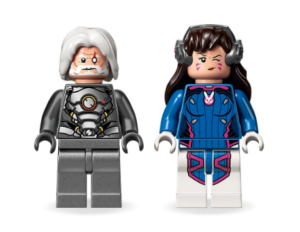 Design-wise, I thought they did an outstanding job on replicating the unique art style of Overwatch and the characters into LEGO form. D.Va minifigure had a custom hair mould as it is an iconic part of her character design and has an alternate face with her blowing bubblegum, a popular victory pose for D.Va players in the game. Reinhardt on the other hand, had the interesting choice of his helmet’s visor being the opposite side of the minifigure’s head as opposed to a sticker or paint on the helmet itself.

On the builds themselves, there is a lot of small but important details to both characters. D.Va’s mech maintains the round curvature of its design and has stickers all over as ads for the various sponsors she has, since she is a professional gamer after all. Contrasting with D.Va’s sleek and rounded mech, Reinhardt’s power armour is very rough and jagged, meant to feel bulky but powerful in combat. Because of this, his arms and legs feel strong and harsh, almost as if they had weight to them.

Something I’ve noticed with a majority of the LEGO Overwatch releases is that the weapons have to be assembled instead of being pre-made molds like with how Star Wars does with their guns. D.Va’s gun is a small little pistol which is very simplistic but Reinhardt is the one that has the stand out weapon, as his rocket hammer has a very clever design and build that truly makes it feel lighthearted and fun but also staying true to the original design.

The one thing that did disappoint me however, was the lack of Reinhardt’s shield. The main reason why he is a popular character to play as is because of his ability to adapt to an offensive stance to a defensive one. With the lack of the shield, the build almost feels incomplete and missing a key part, which is truly a shame considering just how far LEGO and the designers went to recreate the essence of the game. 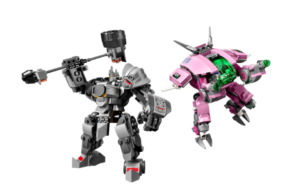 I’ll try and split this between the two different characters as they are very different from one another. I initially started with Reinhardt as he was the first set of instructions out of two and I wanted to follow it properly. Something that was universal for both of them was that they each had two different bags, one for the main parts and the other for the smaller components. Reinhardt was a little more difficult than I found D.Va to be, but the instructions were straightforward (as LEGO is always good at).

While building his armour, I noticed that there was a lot of unique and more advanced techniques to his design, which would be hard to describe in words but is more evident when you look at the instructions (see here). The one technique that stood out to me the most however was how they were able to capture the look of his armour, using flat and sloped pieces for the legs and feet of the armour and having more smooth and refined for the shoulders and chest plate to show the different uses for each part of the armour in a realistic setting

D.Va was a lot more easier to me compared to Reinhardt but that doesn’t mean that D.Va didn’t have complexities to her design. I was worried at first on how they were gonna create the shape of D.Va’s mech when i saw a lot of flat pieces and not that many curved pieces but they managed to do it in such a clever way. They used a boxed structure that serves as a foundation and as the cockpit for D.Va to sit in, and build around it to create that sleek and curved design while maintaining a sturdiness to it. There isn’t much else to be said build-wise as most of it comes from the experience but I will say that I found D.Va’s mech the more enjoyable out of the two to build, though both are incredibly satisfying to build and complete. 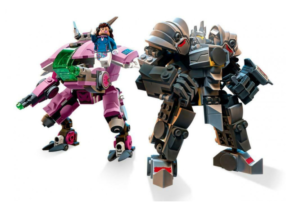 I’ve said a lot of praise with this set so far but unfortunately, this is where my gripes with it comes from. While both characters look amazing and their retrospective builds are a sight to behold, they don’t suit a normal style of playing very well. Both builds tend to feel stiff with their legs and arms and they are quite difficult to balance. They don’t have any traditional LEGO connections on the bottom of their feet and instead Reinhardt has smooth flat pieces and D.Va having claw-like feet that don’t use any traditional form of flat piece entirely. More so, because of the weight the build has, they tend to fall over due to a lack of security and placement. This was especially a problem with D.Va as the legs are much skinnier and small compared to the actual body of the mech itself.

Stiffness also caused some minor issues beside balance that don’t take away too much from the overall quality, but can be a bit of a nuisance. With Reinhardt, I noticed that he cannot hold his rocket hammer with both hands. While this could be a fault of the length of the hammer, the shoulder pads in his armour do heavily restrict where his arms can move and hold onto. This isn’t a major issue by any mean but he does hold the hammer with both hands and is a slight bother to someone who wants as much accuracy as possible in their LEGO sets.

For D.Va, it was the mech’s legs that has some stiffness issues, particularly the right leg (if you were facing the front of the mech and not the back). The left leg was able to move freely enough and pose without struggle, but I found the right leg couldn’t lift up far enough like the other did. I rebuilt the legs and the set three times to try and figure out if this was a mistake on my part but I happened each try so I would assume this was a mistake on LEGO’s part.

All in all, I say this is an excellent collector’s set for fans of the series, these two specific characters, or for people who like to see new and unique ideas on building and how to structure things differently. However, if you are someone who favours playability above all, then this LEGO Overwatch set might be a release you should stay clear of, as the stiffness and the lack of stable balance can be a hassle to deal with. I was impressed with the overall quality and faithfulness to the game and I think anyone can appreciate this set simple for the obvious thought and care that went into the designs of these two in LEGO form.

All images are from LEGO’s official website or other official sources from LEGO themselves.