LEGO is known to not produce war toys, a standard that has endured since the company’s inception. While Star Wars is questionably fitting into this guideline, it has been up to our imagination to build our own real-world military vehicles and minifigures. The hardest thing for us to create with the standard LEGO part library are weapons for our minifigures; that is to say, weapons that can accurately represent real world equivalents. Thankfully, Brickarms has got your fill for proper LEGO weaponry, both for your stormtroopers and army soldiers. I will go in order from, in my opinion, the top fifteen Brickarms weapons, based on their mass ability and versatility. This list will only include Brickarms weapons that I have in my collection so that I may give an honest review, which I hope is understandable.

The L85A1 is the current standard for the British Armed Forces and the Queen’s Royal Guard. If you have British troops among your ranks, a few of these weapons will add to the realism. Or, if you have the Royal Guard figure from CMF Series 5, giving him one of these will make his accessory far more accurate to modern times.

The A-S80C was the preferred primary weapon of the Rebel Alliance in the original Star Wars trilogy. If you have amassed many rebel troops from the Rogue One series of sets, then picking up a few of these will give them the tactical advantage they need to retrieve the Death Star plans. 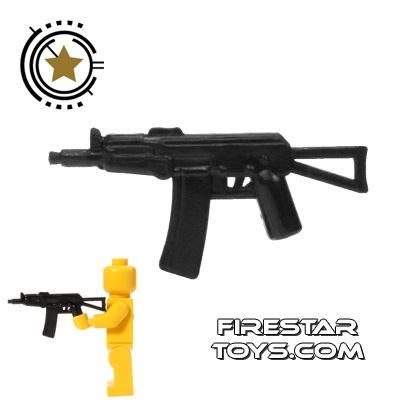 This compact version of the classic Kalashnikov rifle can be used by a variety of baddies; robbers, mobsters, insurgents, and mercenaries. While many will prefer the full AK rifle, I find that the hollow stock of this weapon adds a bit more character.

Seeing screen time since the original Star Wars, the DLT-19 is the LMG equivalent for the Galactic Empire. Used by both the usual stormtroopers and the Death Troopers, and likely by the Rebel Alliance, your soldiers storming in with this piece will strike fear into the opposition before they can strike back. 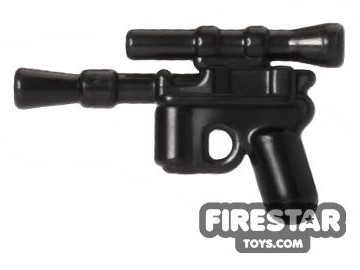 Known for being the primary weapon of the infamous smuggler and general Han Solo, this weapon was also used among the many bounty hunters and Alliance members throughout Star Wars. If you have a Han Solo figure (which I’m sure you do), giving him his trusty blaster will add quite a bit of swagger to his appearance. If you feel like picking up a second, it will also work well with its original owner, Tobias Beckett.

The standard blaster for the revered Imperial Death Troopers, this piece in particular comes with a detachable magazine, so it will be very easy to pose your troopers reloading or loading a crate of munitions. If you want to give your Death Troopers their proper gear, or want to upgrade your other stormtroopers for the field, I recommend getting this fine piece. 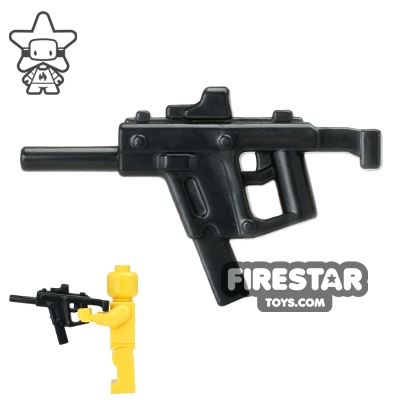 Based on the Kriss Vector, the compact weapon we associate with science fiction police officers and modern mercenary goons, this uniquely shaped weapon is bound to give your figure an edge in battle. Since it is based on a real weapon, you can easily use this weapon as a lethal alternative for your City Police or your Space Police. 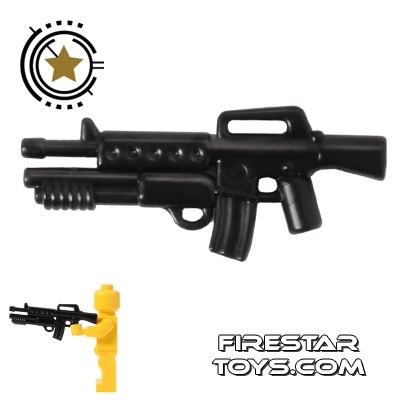 While you may not recognize this weapon at first, it was used by Billy Bear in the original Predator film. Allowing for both long-range and close-range engagements, this piece will surely give your figures a warrior’s aura as they move through the thick jungle, weary of what watches from above.

The DLT-20A laser rifle was used by the Stromtroopers of the Galactic Empire, a specific variant used by Iden Versio of Inferno Squadron. If your stormtroopers need some long-range support or are able to call in special forces, you can’t go wrong with this blaster in your armory. 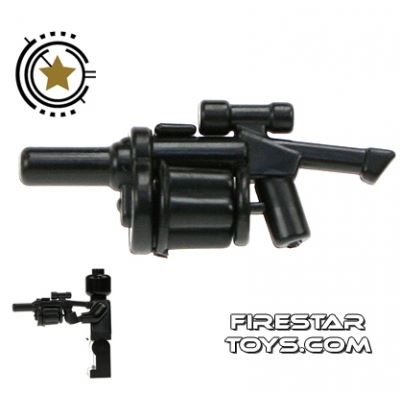 The MGL Revolver is a 6-round grenade launcher, used by many police forces and bad guys all across the world. This weapon comes in two pieces, as the revolving magazine separated to be reloaded or stored. Depending on your imagination, you can decide if you want a lethal weapon with explosive rounds, or a non-lethal riot control device that fires tear gas. If you have survivors surrounded by zombies or need to smoke out the robbers from the bank, you can’t go wrong with the MGL Revolver. 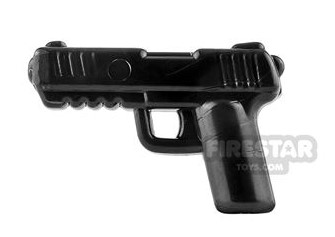 Not all of your figures need a big gun to get the job done. The UCS Pistol will work as a standard yet tactical sidearm for any number of your figures, either for your police, your robbers, or your mercenaries; both alien and earthly. 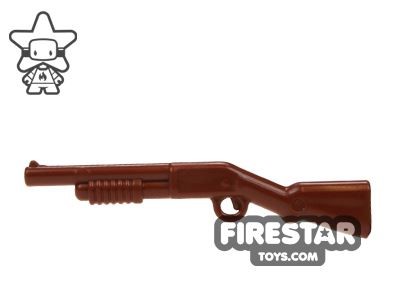 Possibly the widest across time, the SABR Shotgun can be used for your cowboys or train robbers, or your modern zombie defenders and woodland hunters. Available in both brown and gunmetal, you can give your figures an updated steel piece for a more reliable weapon when they need it most. 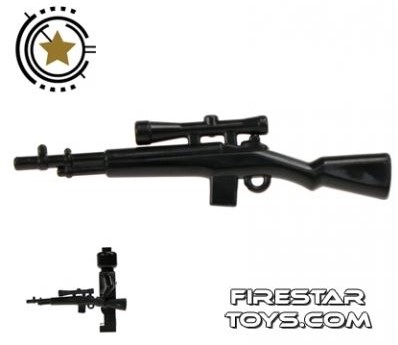 In service for the U.S. Army for over 50 years, the M21 Sniper Rifle may be a generic, but versatile piece. This piece could be used for your forward scouts, or your fortress guards looking to get the upper hand over invaders. Also available in gunmetal, you can have a more solid scope for your special missions. 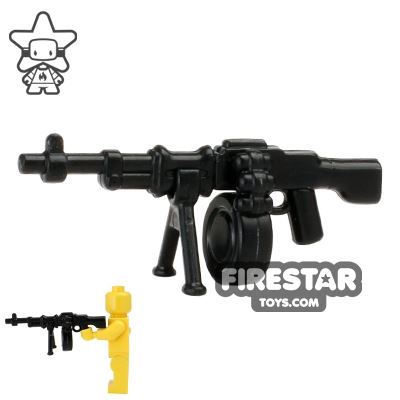 An LMG version of a Kalashnikov, incoming enemy forces will be unable to progress with this high caliber suppressive fire going over their heads. Coming in three pieces, the bi-pod and drum mag are detachable, and the drum can be inserted on either side of the weapon for the left-handed fighters in your ranks. 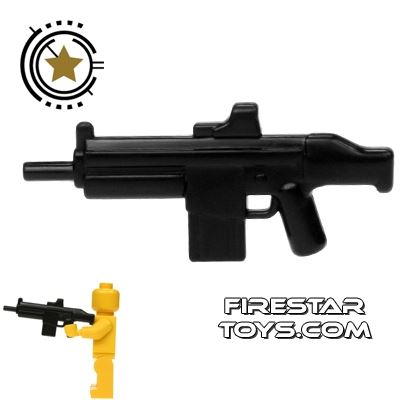 Based on the modern SCAR rifle used by the U.S. Military, while this piece can be used for a wide array of characters, I find this design to be far simpler and plainer than other options from the Brickarms weapons catalogue. If you have a specific loadout for a character in mind, you cannot go wrong with this piece, but if you are not picky, other assault rifles I find may be more recognizable from a distance. 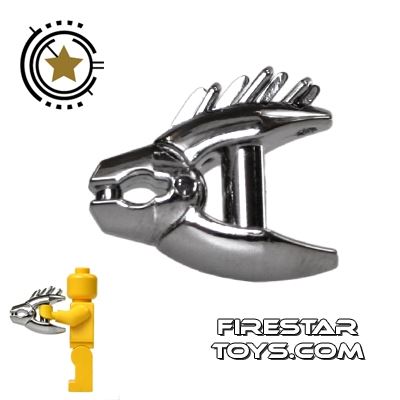 While this may seem like a random choice, the unique design of this piece and the chrome finish makes it hard to resist. Even without the context of Halo, the Needle Gun works well as underworld weapons used by Space Police baddies looking for a new way to work on their lunar heists. Outside of that, it’s not a very versatile piece. 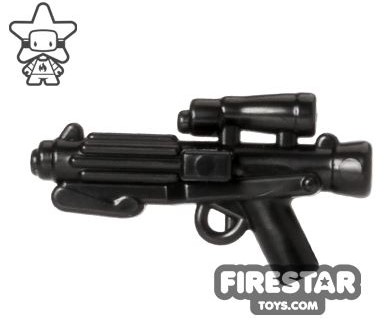 The instantly recognizable blaster of the Imperial Stormtroopers, this piece will add a far greater sense of realism to your less-than-sharp shooters. While the standard LEGO blaster is close enough to replicating the E-11, this far more screen accurate version will make your trooper look more like the grand army of the Emperor instead of just a cadet.

Brickarms was one of the first third-party manufacturers I ever bought from, and I have continued to do so ever since. For those of us who like to make custom figures or display elaborate battle scenes, I feel that Brickarms weapons were that missing piece(s) that made it all too perfect. If you are interested in giving your figures a touch up for their gear, I would highly recommend picking a part (or a couple) from Firestar’s Brickarms weapons line-up.