A question: what stands at least two LEGO minifigures tall and looks like a LEGO minifigure? The answer is a LEGO torch! In this article, I’m going to have a short look at this non-standard figure and why they may be one of the best non-minifigure figures ever!

And then there was light! 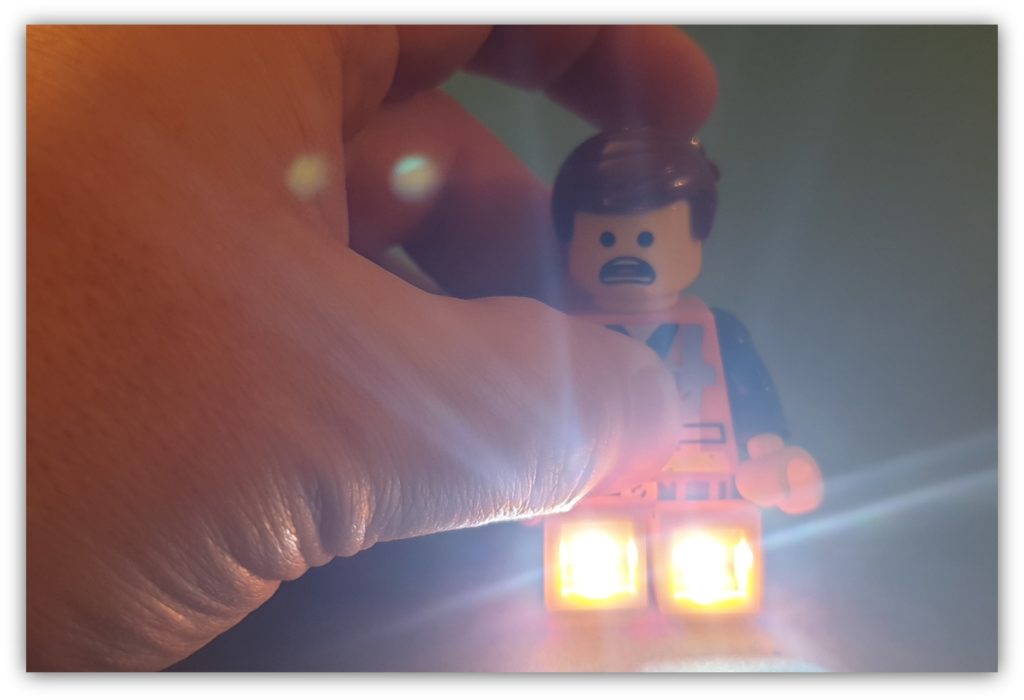 Usually in these articles I like to add a little historical information, but these have given me a problem. Because I couldn’t find anything in the usual LEGO sources to get any information about when they were first made. So, I went to Google and started to sift through articles and based on published dates it would seem that these figures first started to appear late 2009. Back then, they were a standard “classic” LEGO minifigure with a keychain sticking out of their head.

The basic design hasn’t changed even now; there is a button in the centre of the torso and pressing this will turn on the two super-bright LED bulbs located in the legs. These lights remain on until you stop pressing the button. 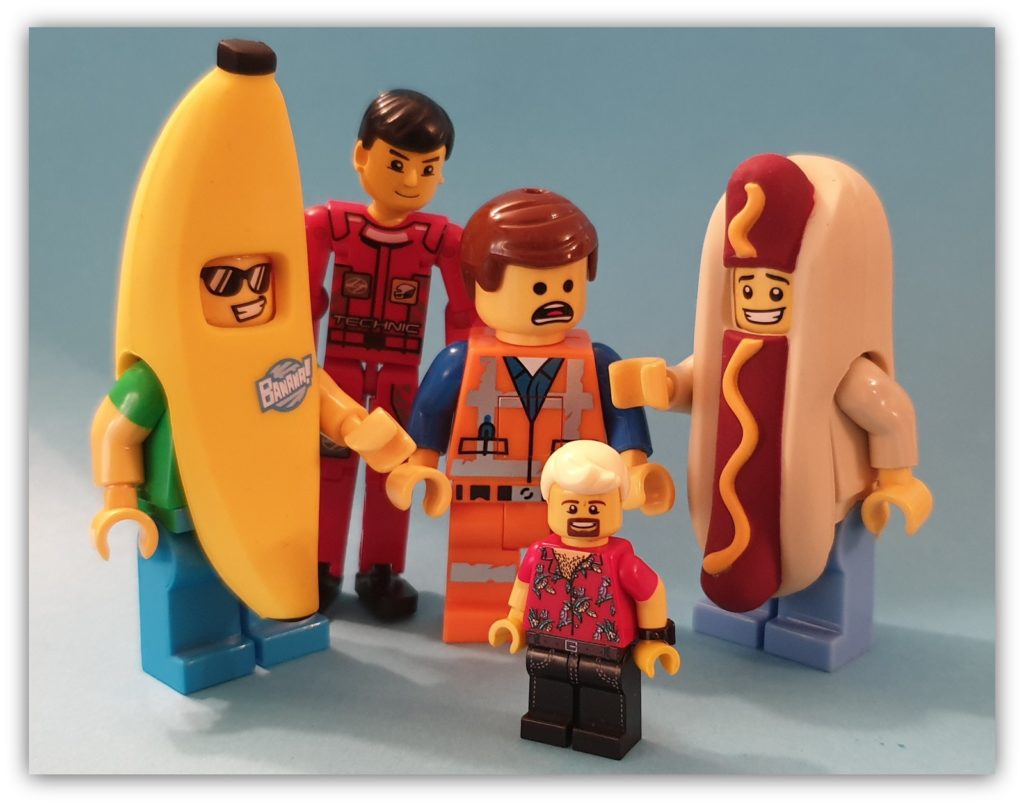 The “standard” LEGO torch is about the height of two minifigures. Using the international brick system of measurement, they are about two plates shorter than a Technic figure. In terms of plastic toys, they stand about the same size as a Playmobil figure.

But LEGO did produce a much larger version of their torch. This stands approximately 20cm / 8 inches tall and features the button on the stomach and lights on the feet combination. However, it also has a switch on the back, so you can turn on the lights and they will stay on. The only version of this larger LEGO torch that I have seen is a Stormtrooper, which I had to have because, well, Stormtroopers are so cool! 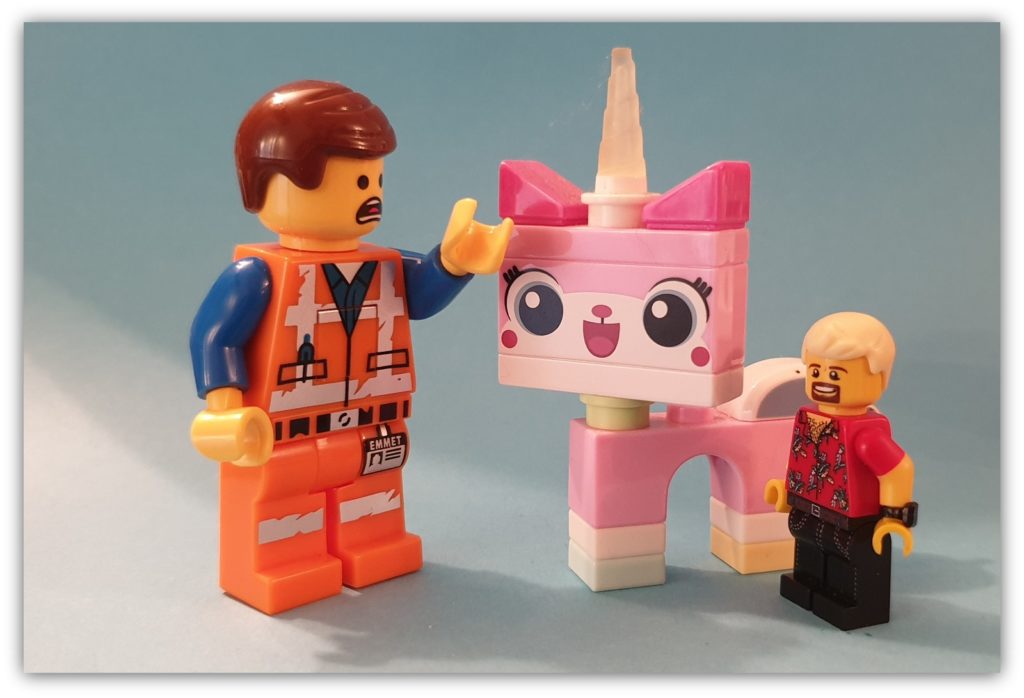 Since the original has come out, I have seen so many different variations of the keyring torch, and in many cases have instinctively bought. I mentioned the super-sized Stormtrooper earlier; well as can be seen I also have the keyring sized figure and the Darth Vader figure as well. With tie-ins to movie rights and franchises, all manner of the LEGO Movie and Star Wars figures have been made available.

One of the coolest lights must be the Unikitty. Rather than lights in its legs, the light is in its unicorn horn and the “button” is on its face! However, there isn’t a button at all, you just rest your finger on its face! 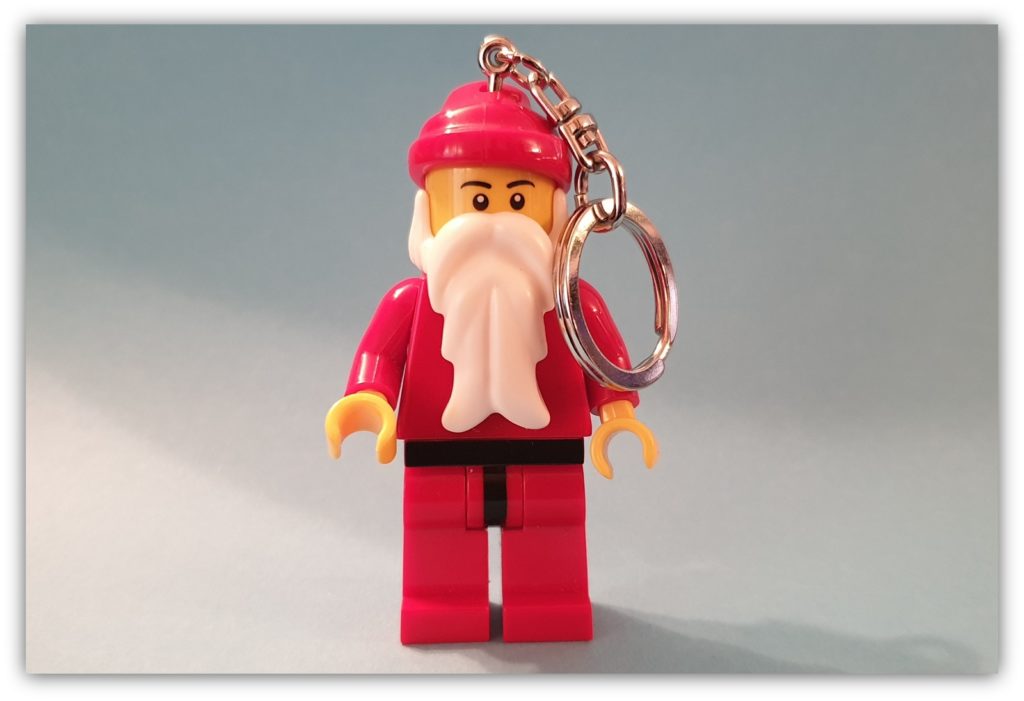 One thing I have noticed is that unlike a standard figure, once they’ve gone that is that and finding retired torches is a real challenge; and that’s a shame, because I was surprised when I realised how many different versions I had and more surprising how many more variations existed!

A keyring torch figure will cost you about £6 GBP, which isn’t an unreasonable price in my opinion. However, as I noted earlier, getting hold of the figure you may want could be a challenge!

But the Key thing is 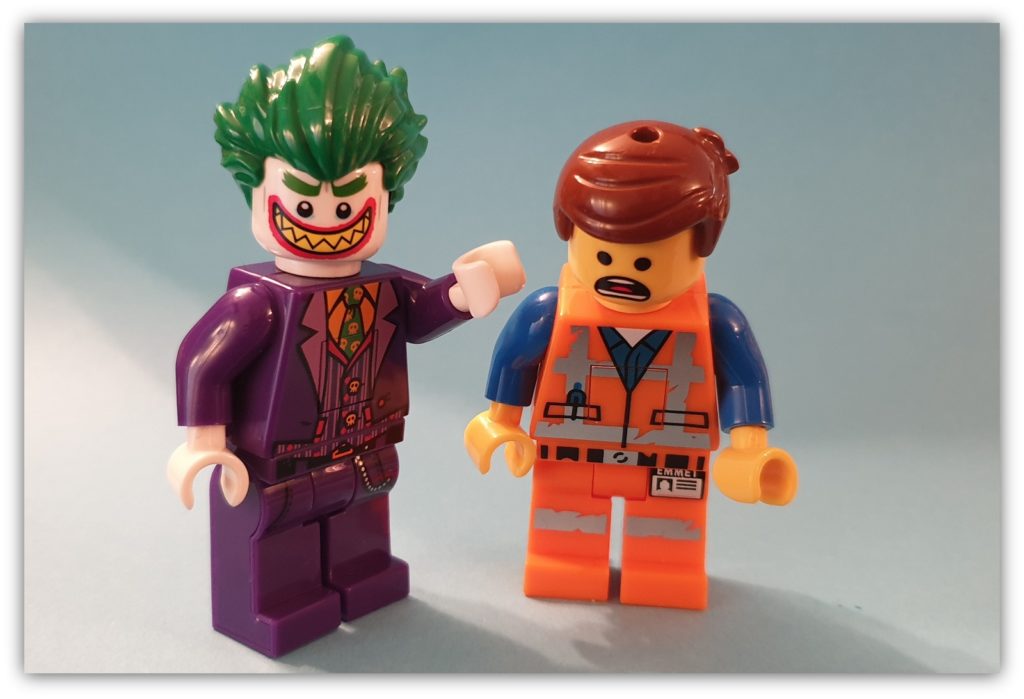 Before I head into reasons why I think you should have one (apart from being able to see in the dark with a minifigure!) I should really address what may be one of the biggest frustrations I have with these figures. That thing is the key chain. I understand why LEGO would want to make it hard to remove the keychain from a standard minifigure; by purchasing a keychain minifigure you can get around having to buy a possibly expensive LEGO set, or paying for a figure on the second-hand market. All you need to do is remove the keychain!

But removing the keychain is a pain. LEGO have produced some quite ingenious posts to make removing these without damaging the figure a challenge. But there are many videos on the internet that will show you how you can do this; just watch you don’t burn your fingers. Once you have removed the keychain you are left with a figure that has a hole in its head; but if you are creative you can always plug the hole and cover it over. You’ll note in my pictures that whilst I have removed the keychain, I haven’t bothered to plug the hole.

The other key thing

The second point to be made with keychain figures is that unlike the standard figure you don’t have the flexibility to swap accessories, heads etc. Additionally, I have yet to see a keychain figure with a double-sided head; I would suggest that this is because all the other parts (such as hair, hat) are glued on.

So, what are they good for?

As the keychain torch figures are twice the scale of a standard figure they won’t fit in any normal LEGO or Technic vehicle (too big or two wide). But that doesn’t mean they are useless. Unless you are very specific about what is in your toy box, these figures are a much better scale for Playmobil and dollhouse accessories (although because their hands are also scaled up the inner diameter means you may need small blobs of Blu-Tack to hold the accessory in place.

However, they do have the same flexibility and movement as a standard figure (and if the chain is still fixed it has an interesting counterbalance). And it is this movement that makes these figures so great; not from a play perspective but photography. 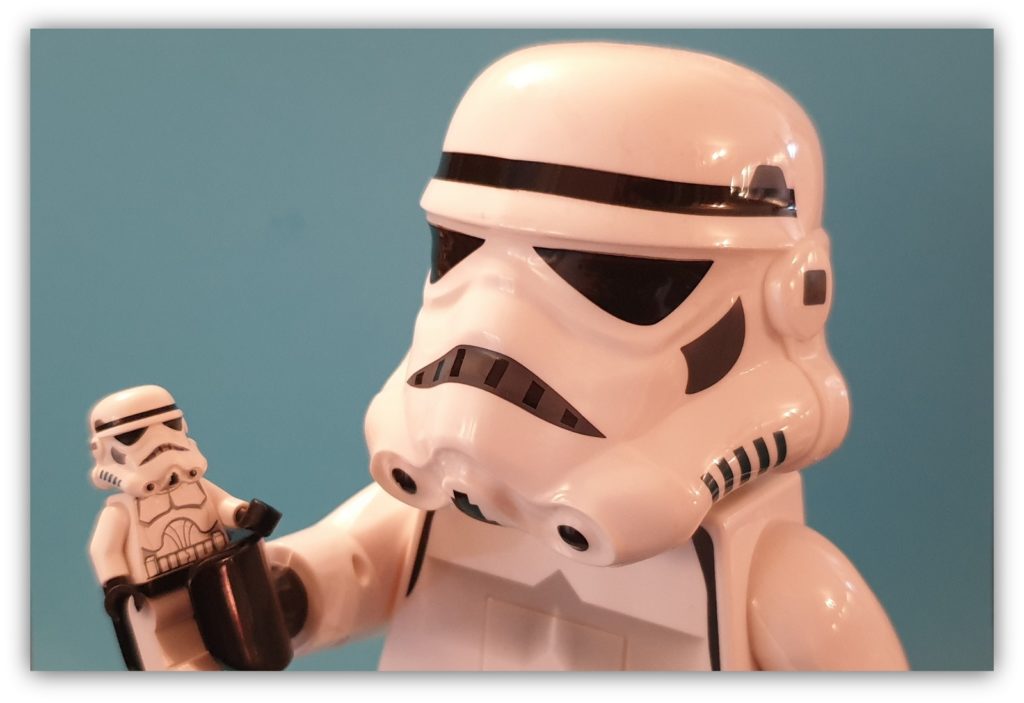 One of the biggest challenges that face a toy photographer is that of scale. Whilst photographing toys in their “natural habitat” is great (for example a LEGO figure coming out from a LEGO house) in my opinion, photographing figures in “real world” situations is a lot more fun. As a minifigure is only 4.5 cm tall, a camera will focus on the figure and with this macro focus everything in the background is a lot more blurred and unless you take two images and undertake a lot of post image editing the result loses some of the locational background.

However, a larger figure will allow for a more relaxed depth of field, and the result is slightly more pleasing.  The image above shows the impact of different scale figures.  And being only twice the size of the standard minifigure, it is still something that can fit easily in the pocket.

The end of the tunnel! 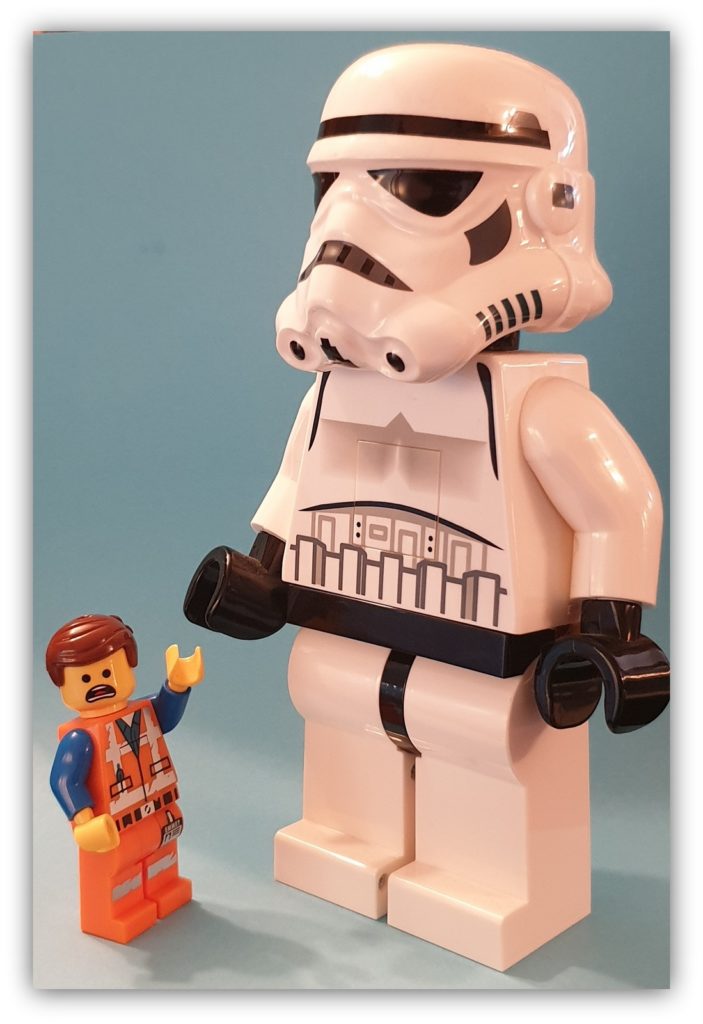 With the recent hype of the LEGO Originals wooden figure, I couldn’t help but think that the LEGO lights were still a much better figure to get hold of, especially if you didn’t want to spend all that money on a non-posable art figure.

I love the fact that these are just big figures, but perfectly to scale and if you don’t have one, I recommend getting at least one!