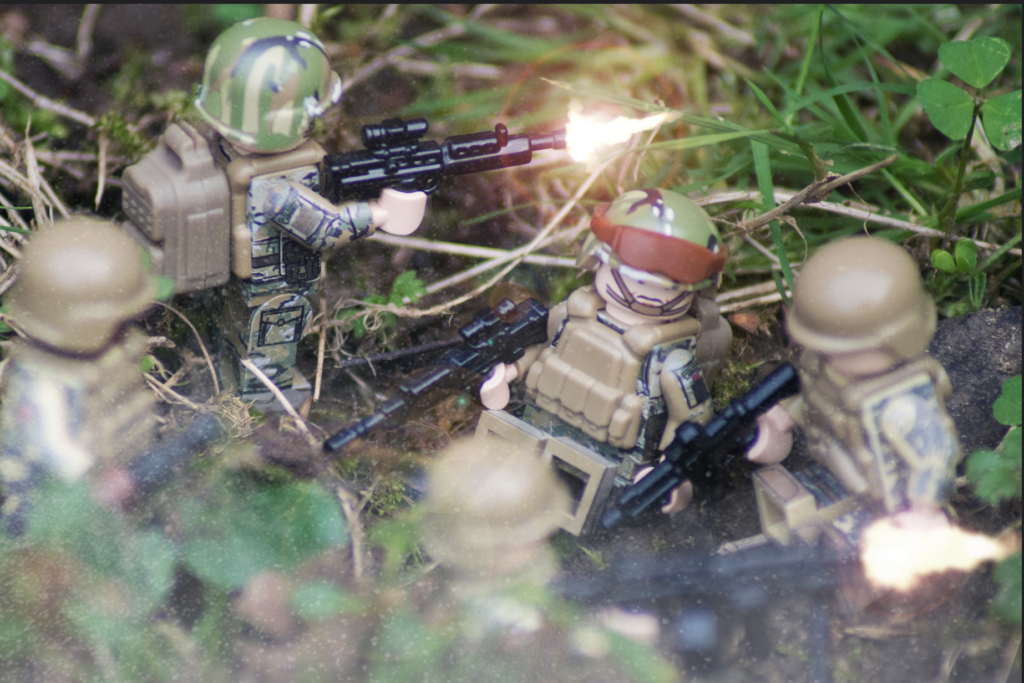 Within the real-life world, militaries use body armour, often referred to as ‘tactical vests’, within a very dual-purpose function. Their first, and primary, purpose is to provide protection for a soldier as they conduct their duties within the battlefield. This means that every type of body armour, unless used for another purpose, will have slots inside the armour which enables the placement of plates. These plates are usually made of metal – and combine with the tightly-woven Kevlar material used on these vests to provide the best protection from the impact of a projectile – like a bullet. Whilst injuries like bruising can still occur, body armour is fundamentally designed to stop that impact from taking a soldier out of the fight.

Now, their second function is to carry equipment which the soldier may need within combat. This can be anything from a radio – which allows a soldier to communicate with command, to additional ammunition and explosives which allows them to effectively conduct their role as a soldier. Many tactical vests use modular systems – allowing them to adapt to different roles, and so there is an abundance of different designs out there.

As you would expect, that means there are an abundance of LEGO-compatible designs for your minifigure-scale soldiers too – so without any further ado, let’s jump into them! 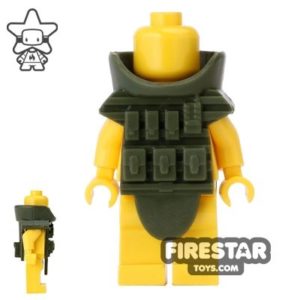 Popular culture commonly refers to these heavier suits as ‘Juggernaut’ armour, after games like Call of Duty have popularised the idea that these large-scale suits are worn by soldiers who are engaging in heavy combat and need to absorb lots of damage. Whilst the suits are designed with damage in mind – it is a different kind of damage. These suits are used by EOD Units (Explosive Ordnance Disposal) and are designed to increase the chance of survivability from both an explosion and the accompanying shrapnel which a user may encounter if an explosives device were to detonate during an attempted diffuse attempt.

CombatBrick’s rendition here is accurate – capturing everything from the bulky, cumbersome shoulder protection to the additional cod-piece which protects a soldier’s crotch and upper legs from suffering shrapnel damage. Now whilst a EOD suit would usually be accompanied by leg and arm armour (something which SI-Dan do provide), I really like the sense of scale and intimidation that this piece inspires.

I really appreciate the attention to detail on this piece. Not only do we have well-sculpted pouches and a walkie-talkie which look at home on the character, but we also have a high level of detail on the back of the vest as well, with an additional pouch and additional texture used to authentically capture the shape and feel of real-life EOD armour. This piece will be perfect for LEGO fans looking to recreate those ‘Juggernaut’ characters, but also for fans who are looking to create authentic EOD soldiers within their collections – providing ample opportunities to create characters fitting for an assortment of different theatres of combat through the colours available. 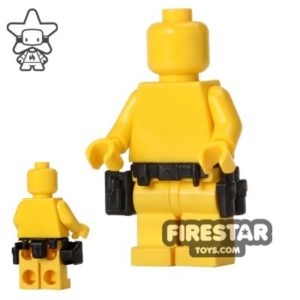 Choosing a specific variant given the slight differences between them is quite difficult, so here I’d like to touch on all of SI-Dan’s fantastic tactical belts which they offer for LEGO minifigures. Their tactical belts work much akin to the belt seen on the LEGO Batman Movie Batman minifigures, sitting on the figures hips with sculpted details hanging down and covering up the print on the hip.

Here, however, the accessories are much more functional – with the tactical belts featuring functional holsters which can hold a minifigure’s sidearm. Something which I really appreciate here in particular is the fact that these accessories cannot just be used with SI-Dan side arms – BrickArms and BrickForge accessories amongst others can also be used in conjunction with the tactical belts. My US Navy SEAL team, for example, use BrickArms M9 Sidearms, which sit snugly in their SI-Dan holsters.

I also appreciate the addition of rear clips to many of the belts – allowing minifigures to carry hand grenades and other accessories. This is another fantastic additional attention to detail which I don’t feel is necessary, but which makes a nice difference nonetheless. Sometimes, a figure with a custom moulded helmet and vest and then printed legs can look a little bland and two-dimensional in my opinion, so the tactical belts provide a nice solution to add an extra layer of depth to our characters and to get them looking even more tactically prepared.

You can find all sorts of accessories SI-Dan made right here. 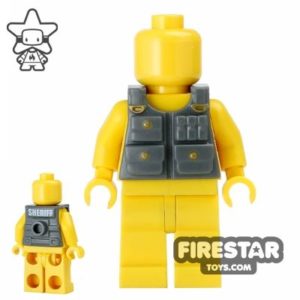 We discussed a little bit in my article on tactical headgear about how subtle printed details can make a real difference to the overall appearance of a piece. That is something which I feel is particularly prominent here, with the Sheriff Print vest from BrickForge. Not only does this vest have the crisp ‘Sheriff’ print on the back of the torso, but it also has fantastic gold harness and button details which I feel add a lot of colour and flair to this design. Whilst the sculpting pockets and pouches may not be the crispest or most detailed when compared to competitors, I genuinely feel that the printed details here provide the vest with some truly unique values. BrickForge also offer vests with camouflage prints on them – items which look fantastic and really add a lot of value to the appearance of minifigures and their overall uniforms and outfits.

Plus, with a Sheriff vest like this, you can better equip our local town Sheriff Brick Grimes to deal with any kind of threat – both human and undead. 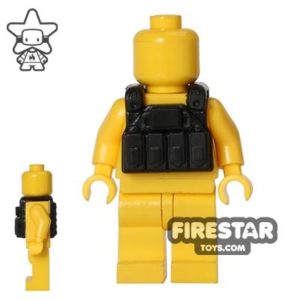 Sometimes, bigger isn’t better, and I think that much is true when it comes to the Special Forces Plate Carrier Vest offered by CombatBrick. Whilst this LEGO body armour isn’t as large as some of the others we’ve touched on (looking at you, Juggernaut), it does have an absolute ton of detail packed into it which is why I love it so much.

We have everything from the adjustment straps which bring the rig over the minifigure’s shoulders, to the four front magazine pouches and the space for a nationality flag – something which is often seen on carriers like this. Furthermore, we also have a high level of detail on the back of the vest – exposing some more of the modular system which vests like this use to secure additional pouches and supplies in place. In short, this vest looks light-weight and tactical – perfect for those more streamlined minifigures who you want to be completing Spec Ops missions swiftly and without remorse.

When it comes to accessories for my minifigures, one thing I absolutely appreciate is accessories which feel high quality – almost to the point where they could be mistaken for LEGO products themselves. Whilst SI-Dan, CombatBrick and BrickForge offer fantastic accessories, they often can clearly be distinguished as LEGO compatible. BrickArms, however, blur those lines – and they blur them in a positive way with Tactical Vests which feel both robust and high quality.

The first series – the LCV series, provides three different Tactical Vests – the Recon, Rifleman, SAW and Sidearm. Each of these vests has pouches configured in a different manner – allowing you to create different but distinct minifigures with their own sense of identity.

The second wave, the PCV series, then include the Commando, Operator, Specialist and Signal – providing even more options for the kind of tactical configurations you could have your minifigures rocking. I absolutely adore the PCV series as the vests feel crisp and high quality – akin to the kind of quality we have come to expect from LEGO. All also include studs mounted on the rear of them – allowing additional accessories to be mounted on the vests for different purposes.

The breadth and depth of different colours available for these products also makes them phenomenal – allowing you to adapt minifigures for everything from urban to arctic contact, or just good old stealth operations. This variety and diversity in both load-out and colour speaks volumes of BrickArms, and perfectly justifies in my opinion why this assortment gets the top spot in my LEGO body armour ratings.

So, that wraps up my look at the tacti-‘cool’ LEGO body armour options which are out there for your minifigures. There is everything from modern law-enforcement equipment to older combat gear out there – so I really recommend shopping around as the likelihood is there will be something out there for you.

What did you think of my picks? Did you agree or do you have another favourite?